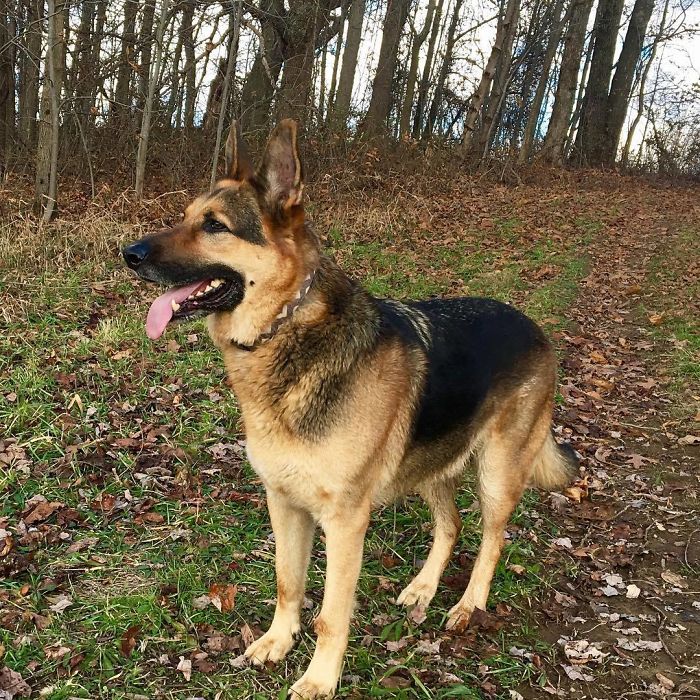 Meet Sarge, the perfect babysitter for the injured animals his owner rescues.

Sarge is a German shepherd and when you think about a German shepherd, you probably imagine a loyal, determined guard dog that would give up his life to protect his human. Sarge has that look but is a complete softy when it comes to injured and orphaned fawns. Looks like his owner’s habit of rescuing animals has revealed a much softer side of him. 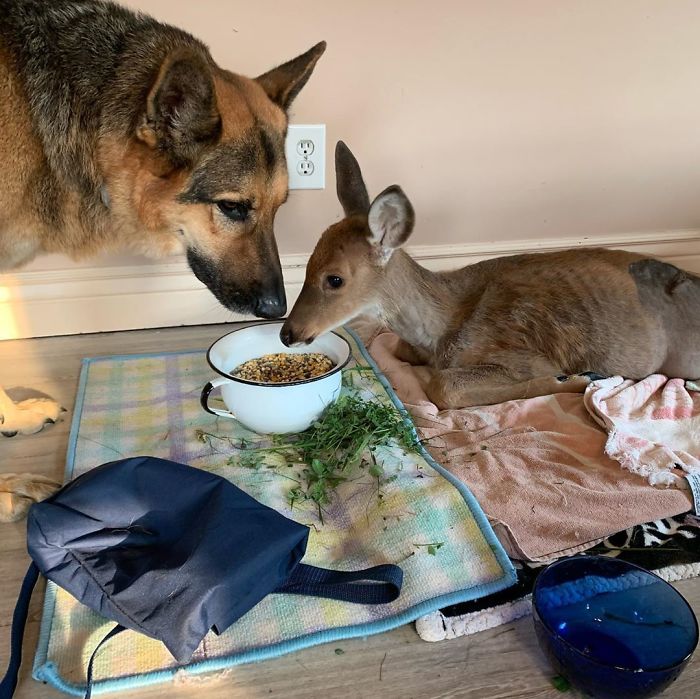 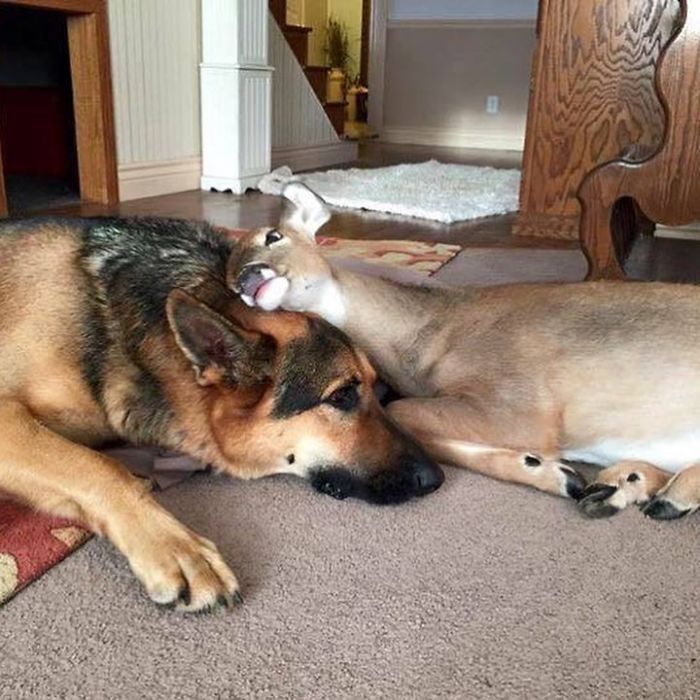 Sarge’s owner, Cheryl Stephen said about the dog and their farm: “We live on a little ‘farm’ in Ohio, but the animals here aren’t raised for food. They’re raised to be loved and cherished like all animals should be. I’ve been bringing home strays since I was a little girl and I’ve never stopped. I have two sons and they are animal-lovers too. We brought Sarge home nine years ago. He’s the only full-breed dog we’ve ever had. The rest are mixed breeds or ‘mutts,’ which I happen to think are the best dogs! Most were dropped off or someone gave them to us because they couldn’t keep them anymore. They are all wonderful and everyone gets along. Sarge was an ornery puppy and loved to bite toes and chase the kids’ friends around the house playing ‘Police Dog. A family friend found a baby deer lying in the middle of a road. He watched and waited for the mom to return, but she never did. He knew we were animal lovers, so the fawn was brought here.” 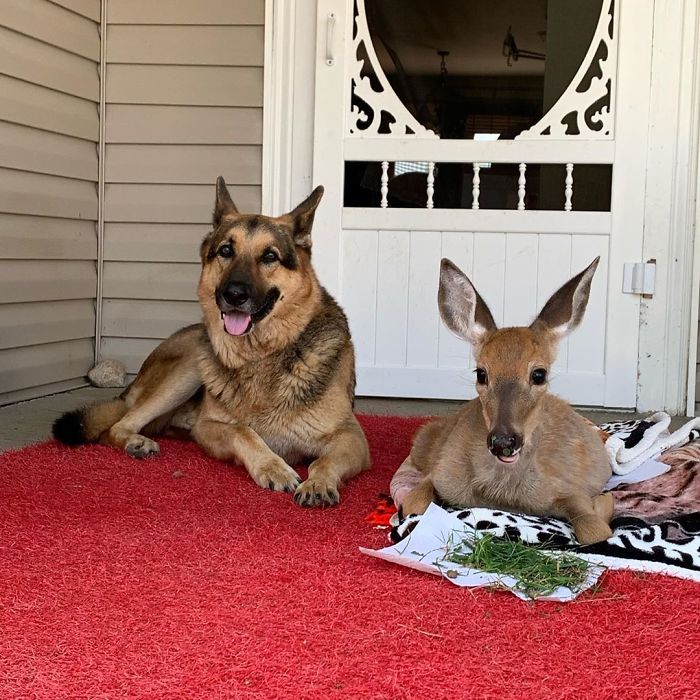 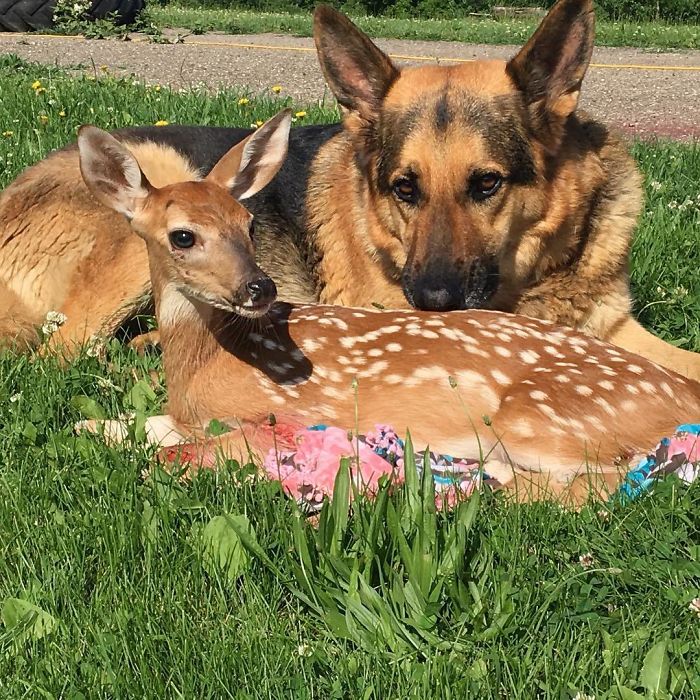 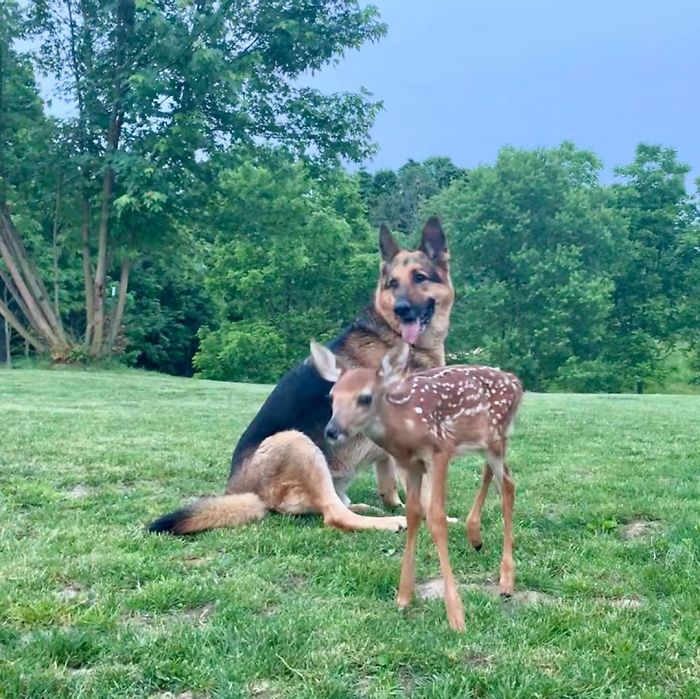 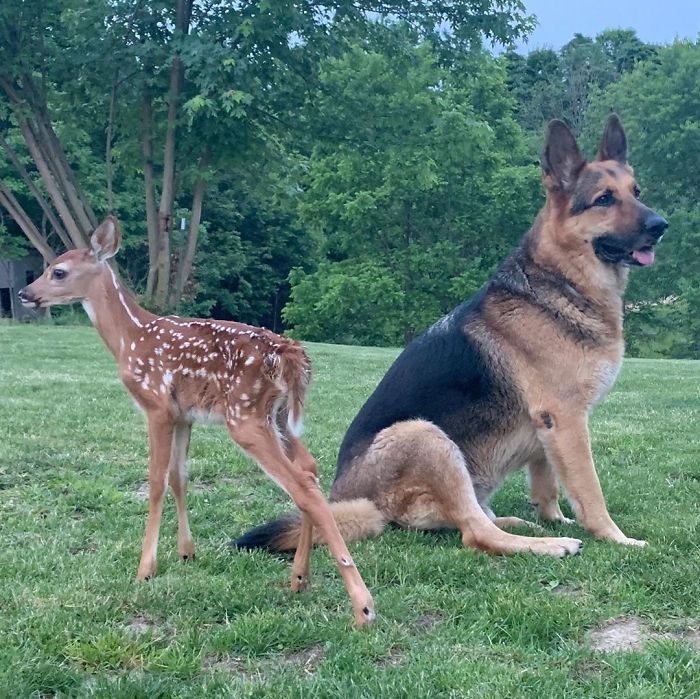 From the very first moment when the fawn was brought back home, Sarge acted as a guard and babysitter to the poor animal. But these two aren’t the only animals on Stephen’s farm: “As far as other animals, we have a pet rooster named Big Roo that kind of guards our place and a hen. We also have a horse and a pony, Gibby and Corn Pone. Recently we brought home a precious little black sheep and a baby goat, Hildie, from the sale barn.”We also have some rock doves that are the offspring of a racing pigeon that apparently dropped out of a race and never left here she had a band on her leg.

In addition to Sarge, there’s Brownie, (her brother Angus who passed away recently,) Doodle, Dingo, and Scrunchers. We also had an amazing dog named Jack who disappeared recently. He loved little critters too and once saved a chipmunk from drowning in a bucket,” she revealed that Sarge isn’t the only one who had a soft spot for little animals. 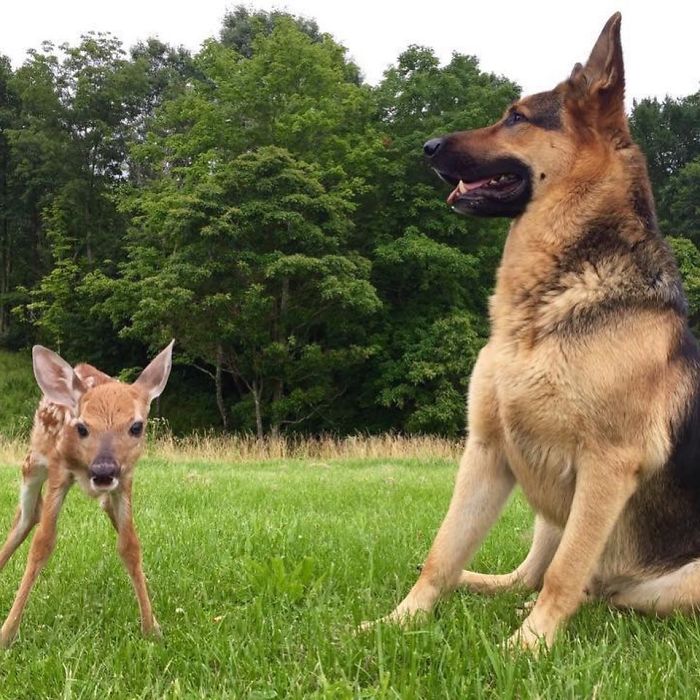 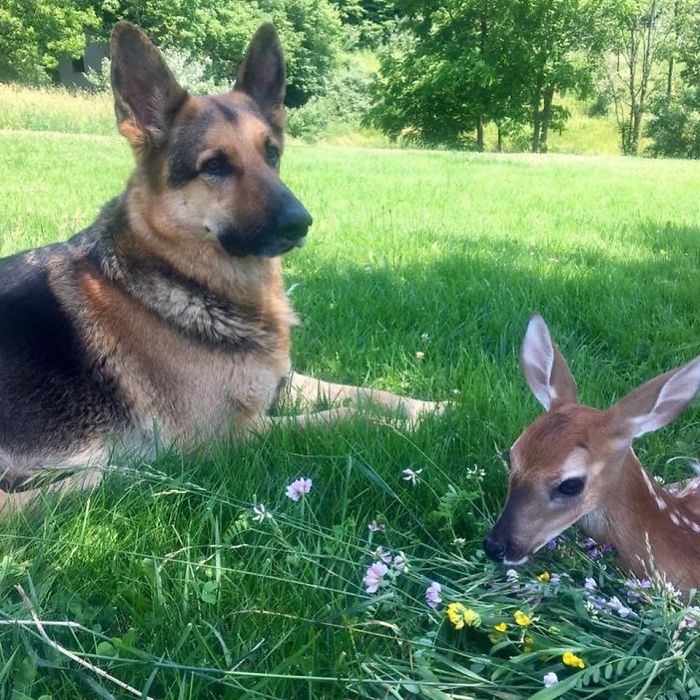 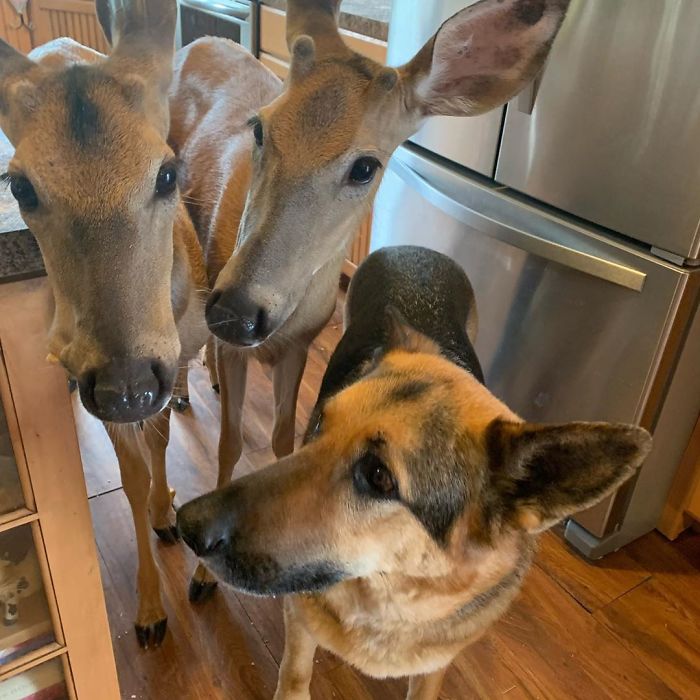 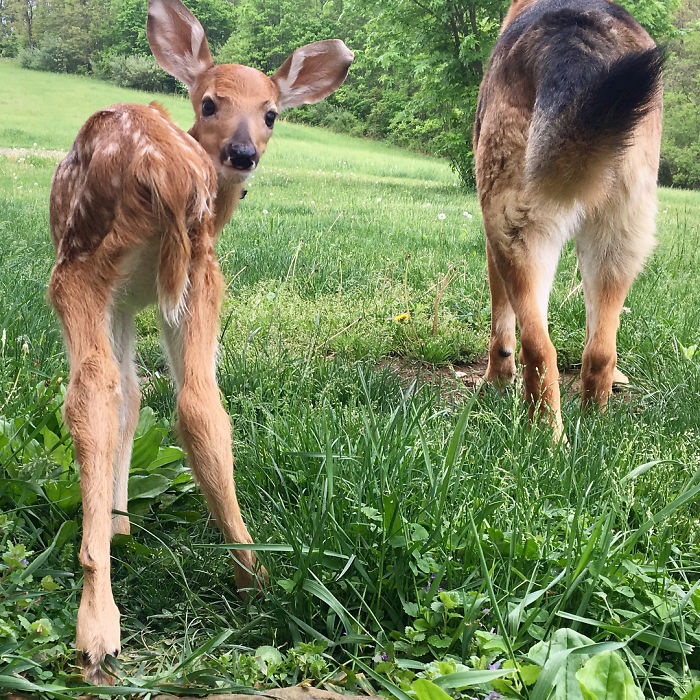 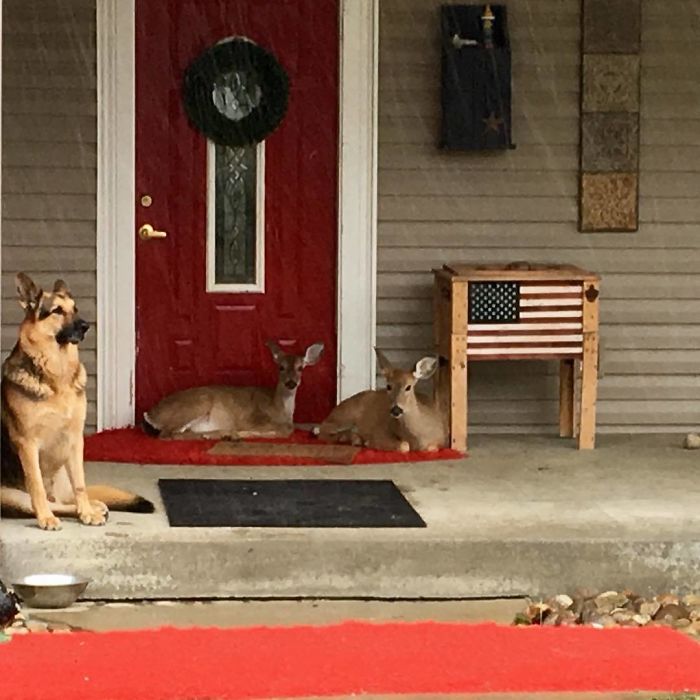 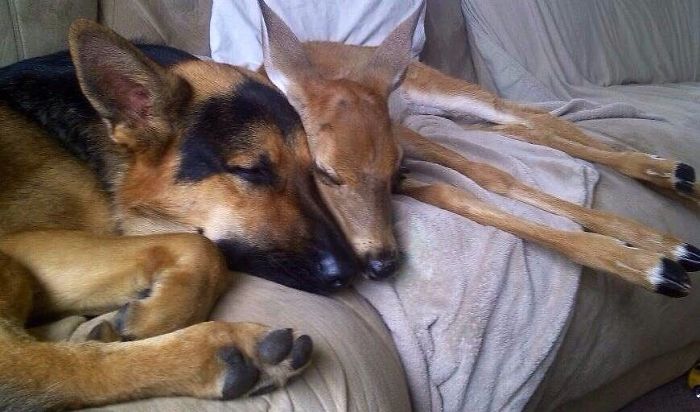 Stephen also said: “We aren’t an ‘official’ sanctuary and we don’t take donations, we just love animals.” She shares moments from her and her animals’ lives on her Instagram page, but Sarge and his little fawns aren’t the stars of the page. It’s actually Bucky, a cow Cheryl rescued when he was just a week old.

“He was on the way to the auction barn when we saw him tied in the back of a pickup. The farmer was nice enough to let me buy him and delivered him to me instead of taking him to the livestock sale where he would have been sold for veal,” Stephen told about Bucky. “It was an impulsive decision to buy a cow, but one I’ve never regretted, he’s about 2,500 pounds now and still likes to hang out on the porch and sometimes comes inside.”

It seems that people really like Bucky on social media pages. A lot of them meet Bucky in person. 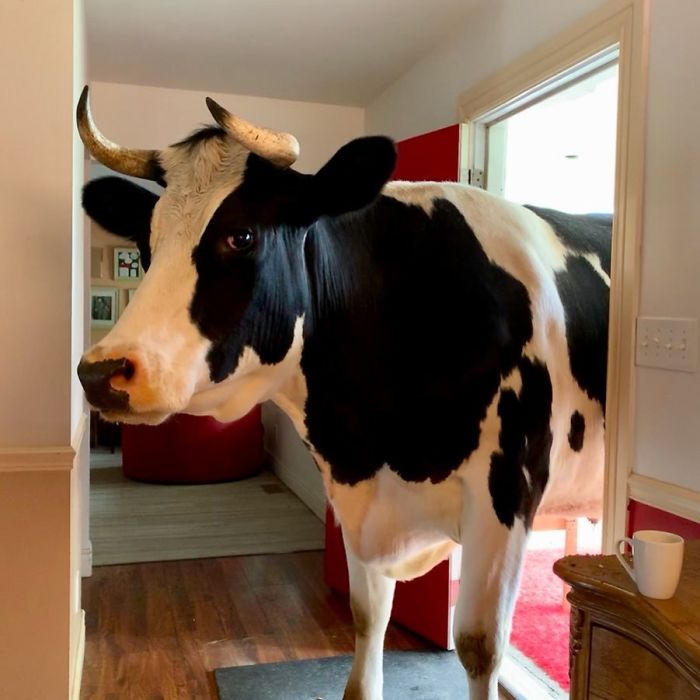 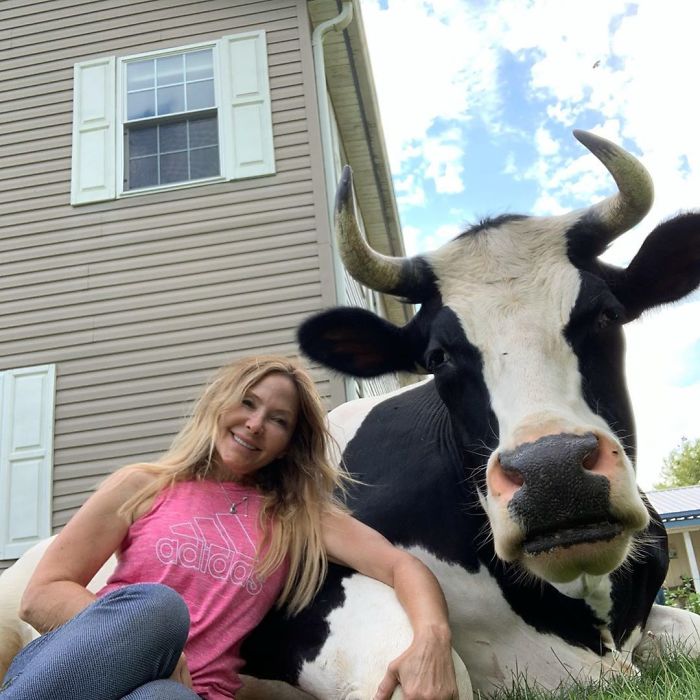 An orphaned fawn is adopted by a German shepherd. 💚💙❤️