15 Of The Most Breathtaking And Exotic Houses Around The World

While some people might be content with a cookie-cutter home in a bland suburban neighborhood, others create truly one-of-a-kind homes with incredibly imaginative shapes and materials.

There are houses around the world that are so unique and unusual, it’s hard to believe they actually exist. Their peculiarity and uniqueness come in all types and forms. 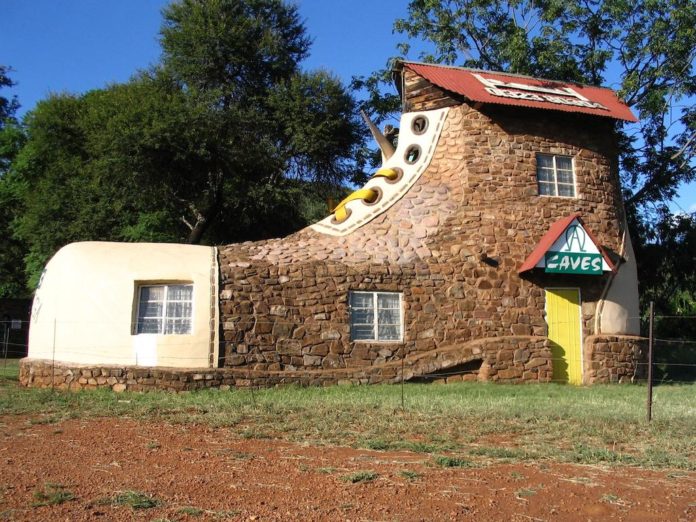 How many of you have ever dreamed of living in a special house shaped like a giant… shoe? One of the most famous houses of this nature is the one built by owner and artist Ron Van Zyl in 1990, on the Panorama Route, in Mpumalanga, South Africa. It’s where the “old lady” lived with her many children, as the nursery rhyme says. Except the furniture of the Old Lady, the shoe also contains a small museum featuring the history of the Valley as well as an art gallery — Ron’s artworks are to be seen here. The Curio Shop and Tea Garden is run by his wife Yvonne, children, students, and also volunteer workers. From The Shoe is the entrance to the Alpha Omega Cave. [Source] 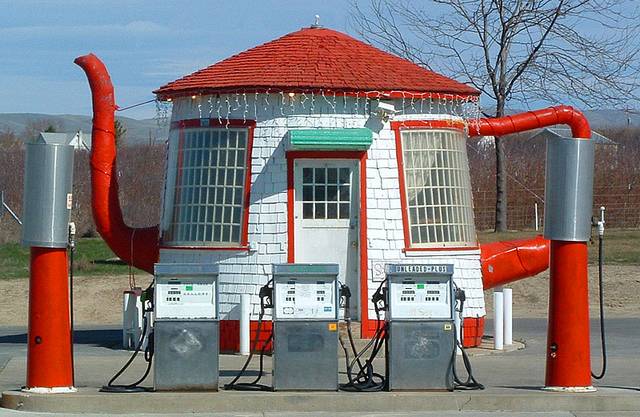 When it comes to architecture, one thing is for sure: you don’t have to build something like Burj Khalifa to draw attention. That definitely helps, but this lovely teapot gas station proves you can do it for cheap.

Known as the Teapot Dome, this architectural jewel is located in Zillah, Washington, and was built almost 100 years ago, as a monument to the Teapot Dome Scandal, which involved a number of important American figures.

Until a few years ago, before it went out of use, the Teapot Dome was considered the oldest gas station in America, but now it’s just a local monument that definitely needs preserving. [Source] 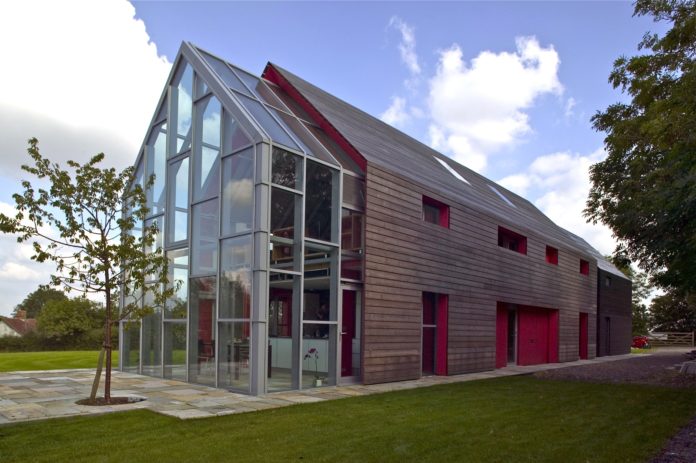 London architects dRMM have designed a house with mobile walls and roof that can be moved to cover and uncover parts of the dwelling. The house, in Suffolk, England, features a sliding structure that fits over the static main house, guest annex, and greenhouse. The mobile element, which is 28 meters long and weighs 50 tons, move along rails set into the ground. As it moves, the sliding element creates shifting outdoor living areas between the static elements as well as altering views, lighting conditions, and the sense of enclosure inside the house. 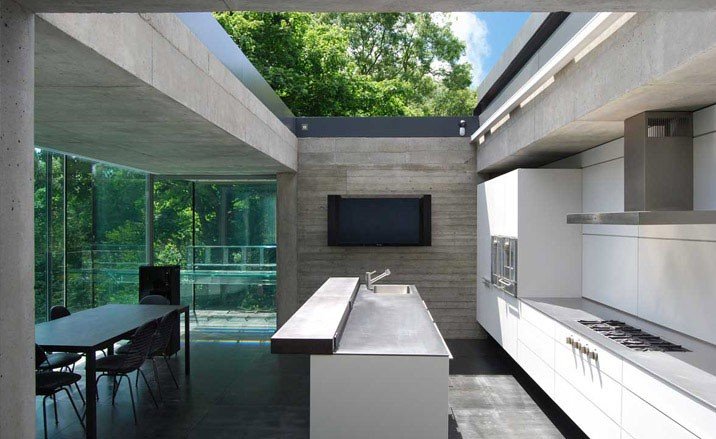 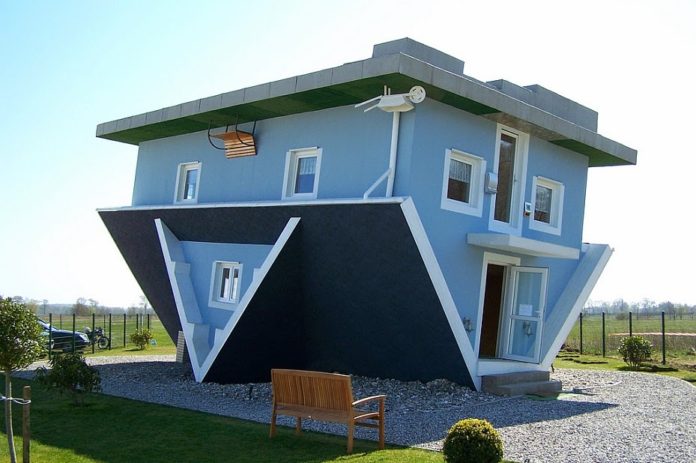 Built in 2008 in the seaside resort of Trassenheide on the Pomeranian island of Usedom, the Upside-Down House of Trassenheide was the first bottom-up dwelling to be built in Germany—but it wasn’t the last.

The topsy-turvy designers behind the odd abode were the Polish architects Klaudiusz Golos and Sebastian Mikiciuk, who built it as part of a project called Die Welt Steht Kopf (“The World Upside Down”), the aim of which was to give visitors a different view of everyday things.

At the Trassenheide house, the only thing that isn’t flipped on its head are the exterior stairs that lead to the attic (which serves as the ground-floor entrance, realistically speaking). 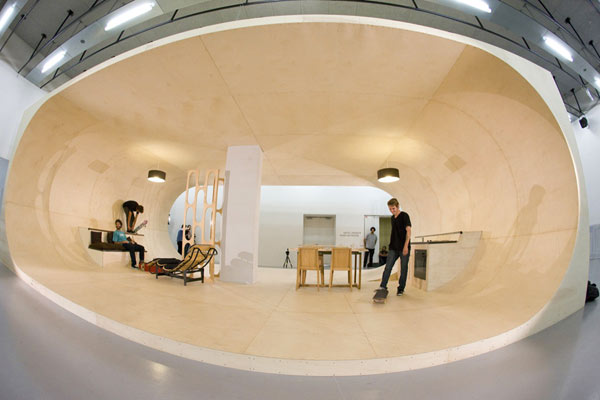 Skateboard house must be the ultimate dream for generations of skateboarders who wanted to bring their practice into their home. The PAS House is the project of a private residence, to be built in Malibu, California. In this house you will be able to skate any areas and surfaces, Indoor and Outdoor. The client and visionary of the project is Pierre Andre Senizergues (PAS), a former World champion and Pro Skater and the founder of Etnies.

The PAS house is the first house designed to be entirely used for skateboarding as well as being a traditional dwelling. [Source] 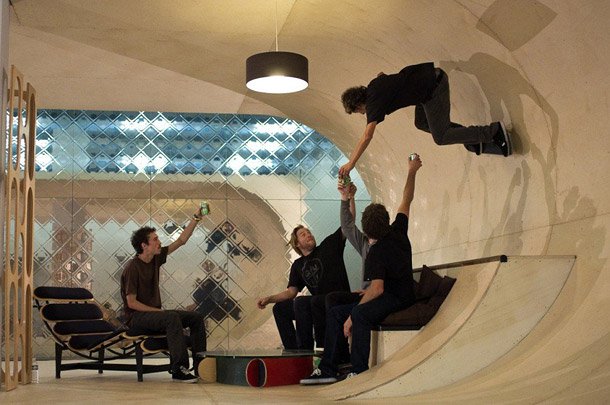 A design for a home anchored to a sheer cliff face offers a striking vista. So far it only exists as a concept, but the design for the Cliff House by Modscape, an Australian firm that designs and builds prefabricated homes, is enough to give a lurch to the stomach of anyone uneasy with heights.

Here’s the pitch – it features three bedrooms (two doubles, the other en-suite), a stylish living space, a carport, separate bathroom and (tantalisingly or nausea-inducingly, depending on your tolerance of sheer drops) an open-air spa and barbecue area on the bottom floor. Artfully minimalist interior décor focuses visitors’ attention on “transcendent views of the ocean”.

Inspired by the way barnacles cling to a ship’s hull, the design envisages that the house would be made up of five modules connected by a lift and secured to the cliff face using engineered steel pins. 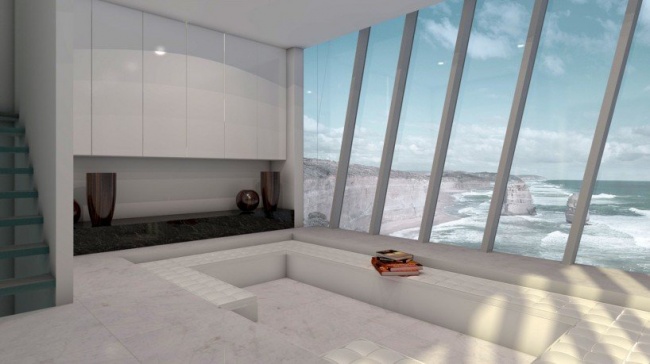 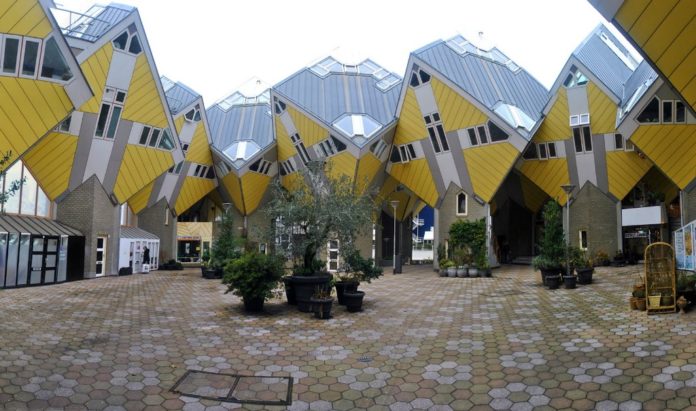 The Cube Houses (Kubuswoningen) in Rotterdam are one of the city’s most iconic attractions. Designed by Dutch architect Piet Blom, this residential development stands apart as its homes are literally cubes, tilted over by 45 degrees.

Architecture in Rotterdam is famously some of the most innovative and creative to be found anywhere in Holland. And even after more than 30 years, its Cube Houses remain one of the city’s most eye-catching developments. It’s easy to see why: these striking homes are cubes tilted 45-degree on their side, optimized to make the most of the available space. The result is buildings that look, feel, and behave, unlike anything you’ll find elsewhere in the world. [Source] 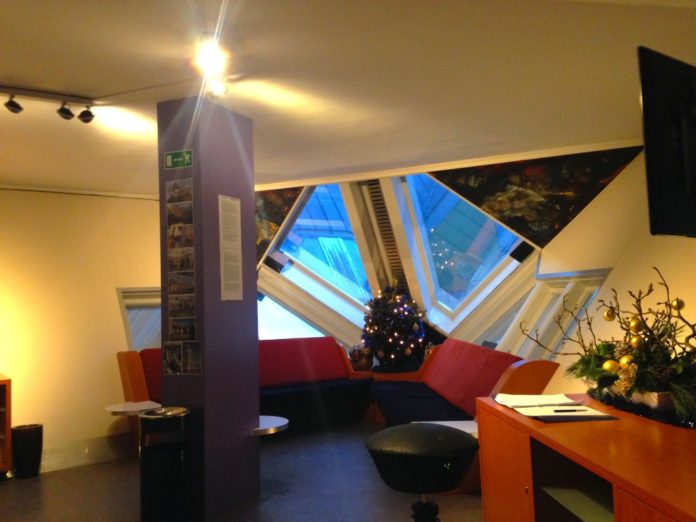 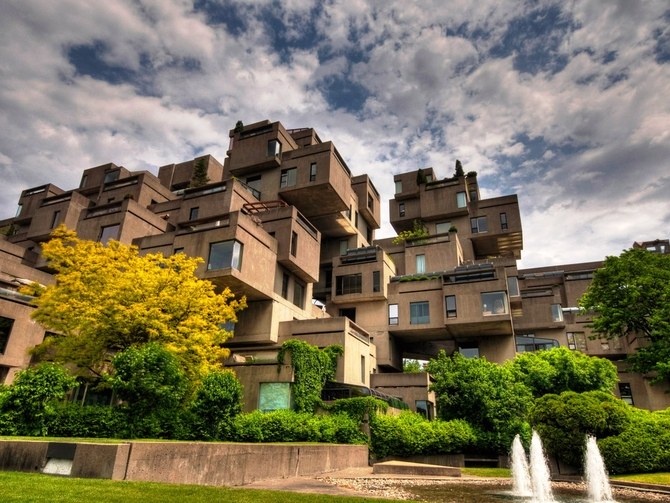 The sprawling housing complex was designed by Israeli-Canadian architect genius Moshe Safdie in the city of Montreal, Canada. Habitat 67 features 354 similar looking prefabricated homes arranged in a variety of combinations to create a dozen stories. Cumulatively, these units form 146 homes of different configurations, each of them created out of a single or multiple concrete units. [Source] 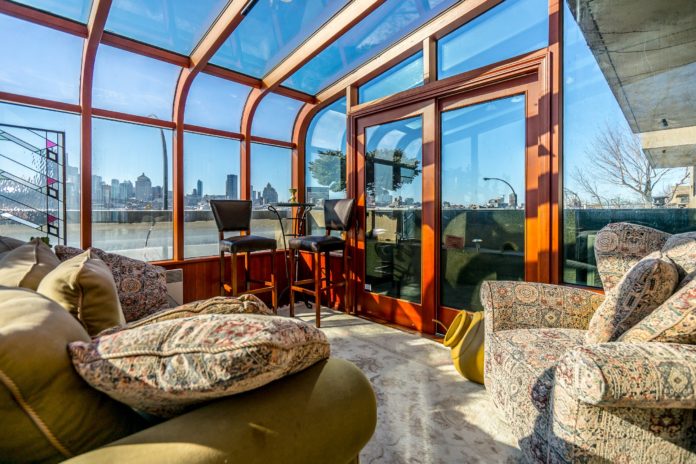 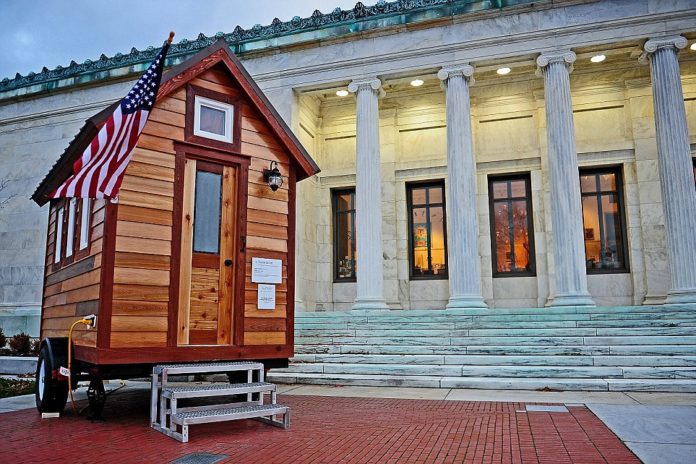 Designed by a German refugee who wasn’t used in living in a lot of space, the world’s tiniest home is merely three squared feet, just about enough to sit or lie down a tad too uncomfortably. The world’s smallest home is probably its most intriguing one owing to the sheer ingenuity. This one is compact yet appealing. 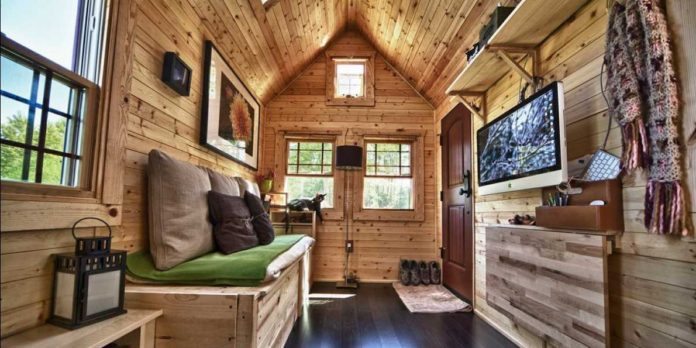 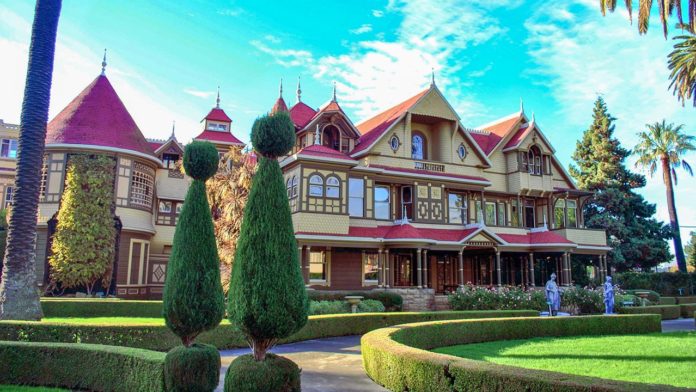 The Winchester Mystery House is an architectural wonder and historic landmark in San Jose, CA that was once the personal residence of Sarah Lockwood Pardee Winchester, the widow of William Wirt Winchester and heiress to a large portion of the Winchester Repeating Arms fortune.

This legendary house is filled with odd features and an innately quirky appeal. There are doors that lead to no place and stairways that take you straight into the ceiling. The best part about this home? It is open to the public unlike many other homes. Plus there are plenty of entertaining of popular culture traces. 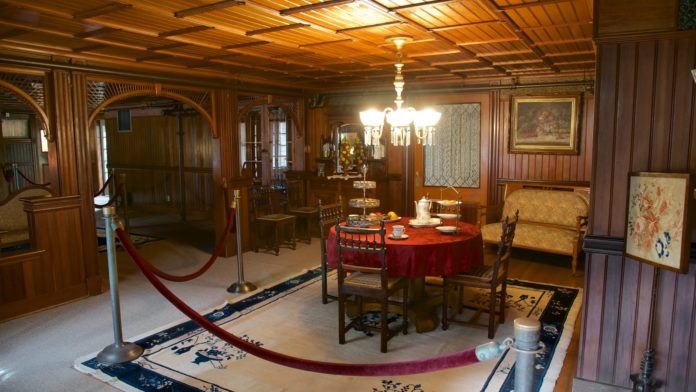 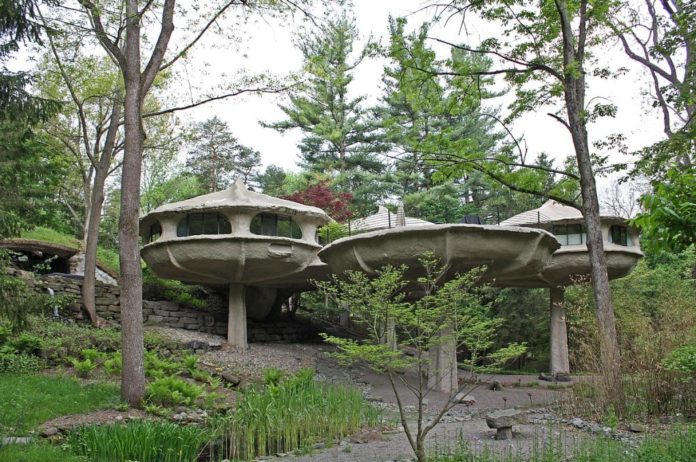 How captivating are these unique pods? Mushroom House was built between 1970 and 1972 with the help of architect James Johnson. The Mushroom House was originally built for Robert and Marguerite Antell, a married couple looking to build a home that was groovy, far out, and full of natural materials.

Mushroom House is made up of 80-ton concrete pods that are built into the side of a hill. Because the walls of Mushroom House are curved, there are no straight surfaces within it. With each pod serving as an essential room in the house, it definitely makes for one unique layout. 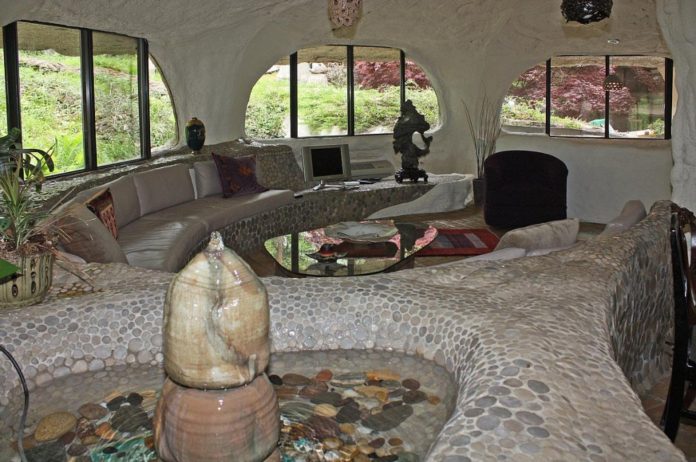 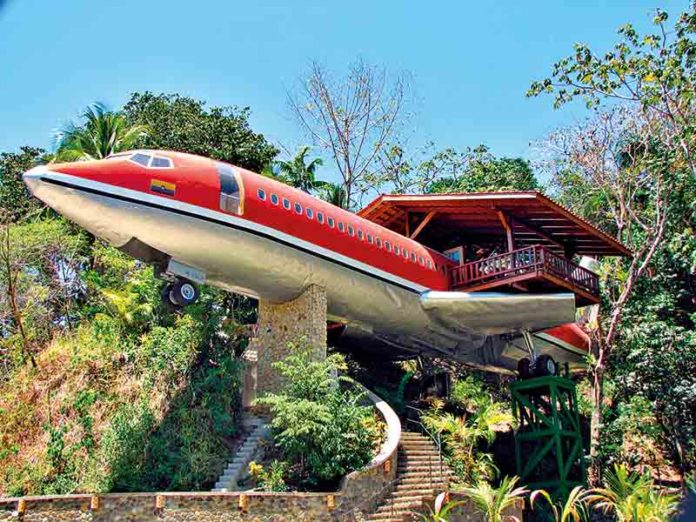 Costa Verde, Costa Rica dates back to the 1990s, when the town of Manuel Antonio was just starting to pop up on travelers’ radars. Today, 25 years later, it’s a real institution in town. The hotel grounds span more than 20-acres, running the length of 1km along the main road to Manuel Antonio National Park.

Joanne Ussery originally owned a mobile abode on a property that she had purchased adjacent to a pristine lake. However, when the structure burned, she purchased the abandoned Boeing 727, and converted it into a unique and stunning looking aircraft home. Truly ingenious! 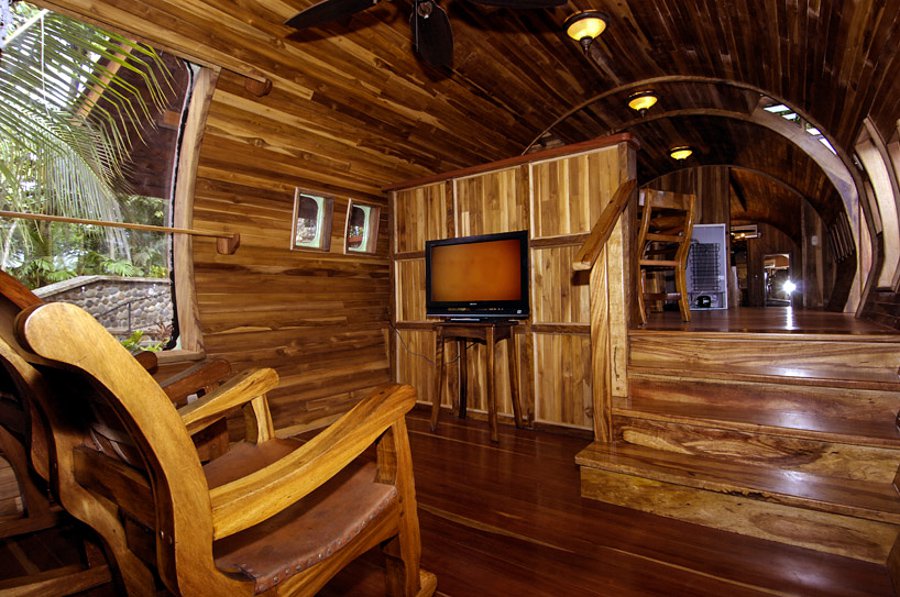 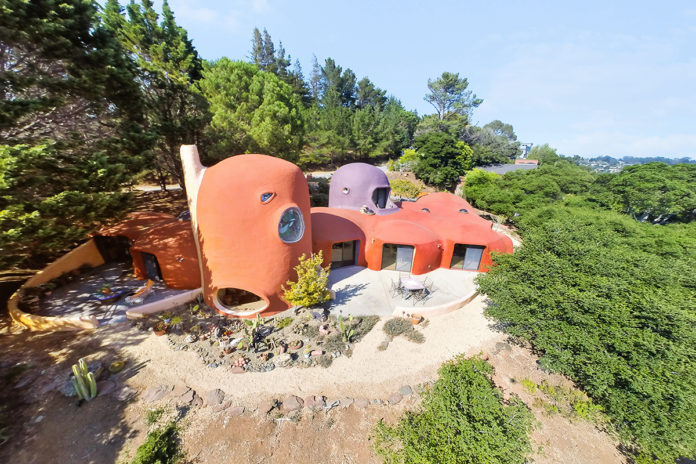 Nestled in a hilly community of about 11,000 in San Mateo County, where homes routinely sell for millions, this particular residence, with its curving lines, red and purple domes, multicolored mushrooms and scattered animal statues, has long attracted attention from neighbors.

Designed as a replica of the home in The Flintstone series, this house originally belonged to Dick Clark. It has a single bedroom, a couple of bathrooms and each item in the home appears to created out of stone, giving it a nice primitive touch. 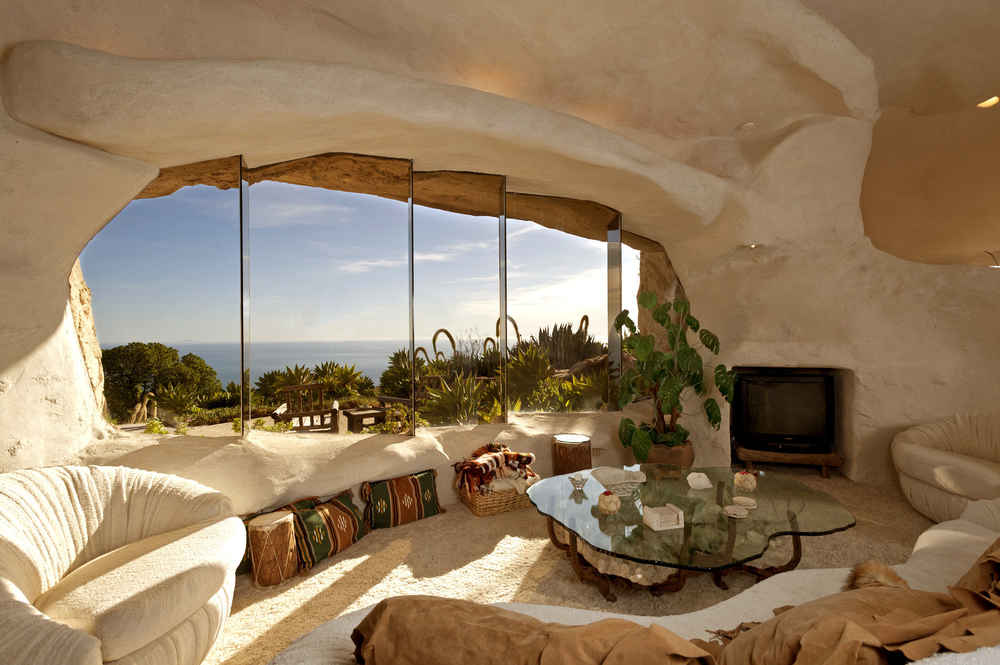 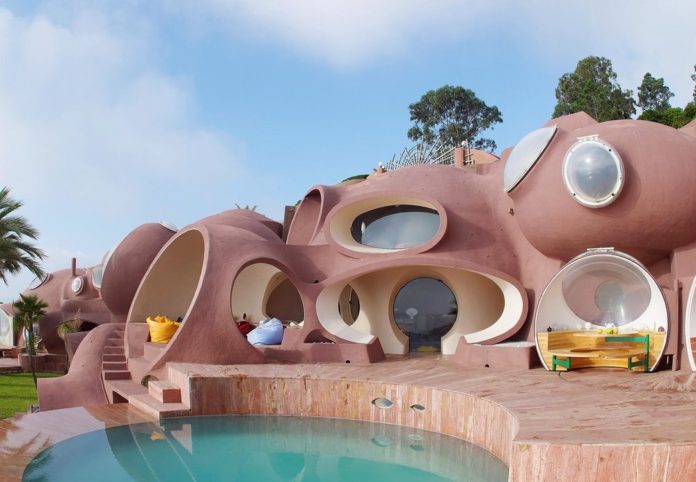 The ‘bubble house’ of Tourrettes-sur-Loup, France, is only 35 years old and has yet to be finished, but that hasn’t stopped the French ministry of culture from listing it as a historic monument. Designed in the 70s by Hungarian architect Antti Lovag for fashion designer Pierre Cardin, the bubble house is futuristic yet organic, with lots of built-in furniture and oval, convex windows. The design is meant to take optimal advantage of the volcanic Côte d’Azur landscape, and its windows certainly provide a beautiful view of the Mediterranean. 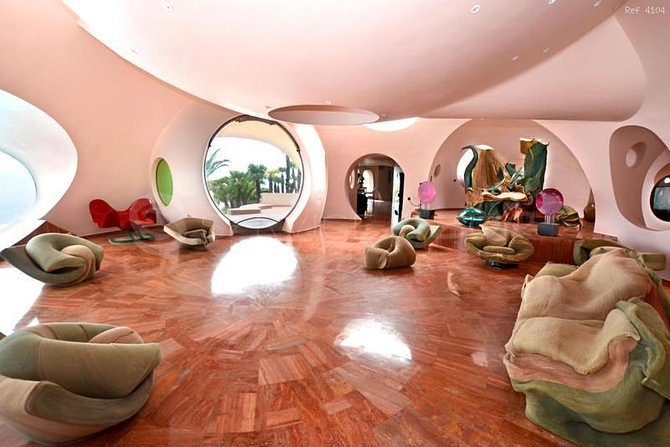 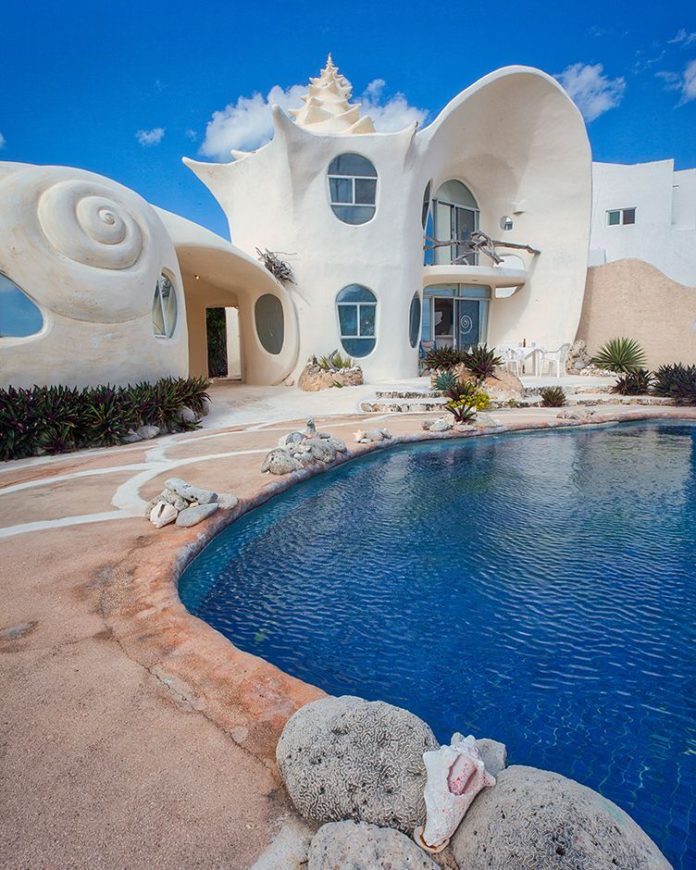 The Seashell House, also known as ‘Casa Caracol’ is a vacation rental located on Isla Mujeres, a Mexican island in the Caribbean Sea. According to the Airbnb website, “In 1994 architect Eduardo Ocampo arrived in Isla Mujeres and built a house for himself (and later met his wife Maria Raquel) His brother Octavio Ocampo visited frequently, Eduardo had two pieces of land in a quaint residential area with Caribbean sea views….and wished to build on his lot for his brother. Of course, this could not be any house. Octavio, a famous painter, needed something unique.”

The smaller rounder shell has features a king-sized bed with a private bathroom and shower made of tile and shells. The taller shell has a sitting area downstairs along with a powder bathroom. There is also a kitchenette with a large fridge, microwave, gas stovetop, and sink with all the tools you need to enjoy home-cooked meals. Up a rounded staircase is the master bedroom with a king-sized bed and a private bath with shower. There is a balcony overlooking the pool and across the street to the Caribbean Sea. 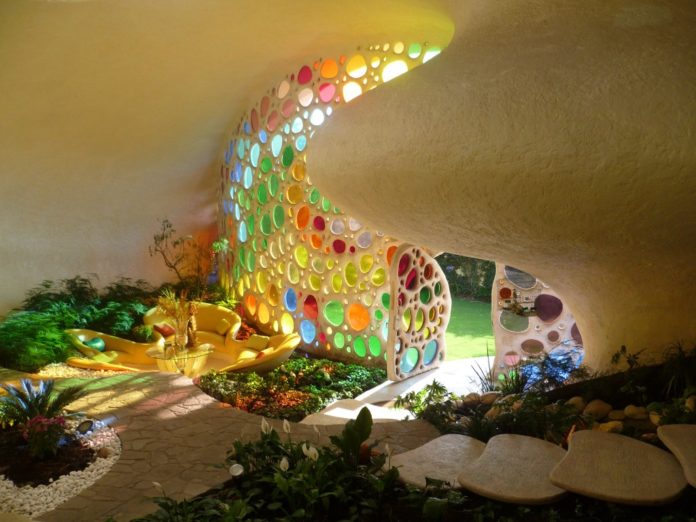