The humble shipping container changed the world sixty years ago when it revolutionized international trade. Now it’s getting a second career in architecture, where it started out as a no-frills, low-cost option but is fast getting incorporated into luxury designs too.

There’s no better example than the Joshua Tree Residence: a 2,100-square foot, three-bedroom home made of white shipping containers bursting out from a central point. Soon it will be nested in the desert just outside California’s Joshua Tree National Park.

Emerging like a starburst out of the California desert, James Whitaker’s shipping container design will soon be constructed for a film producer and his wife. Nicknamed the “Joshua Tree Residence,” the design consists of a cluster of white freight containers.

This modern shipping container home is a vacation retreat that rises like a starburst from the California desert. 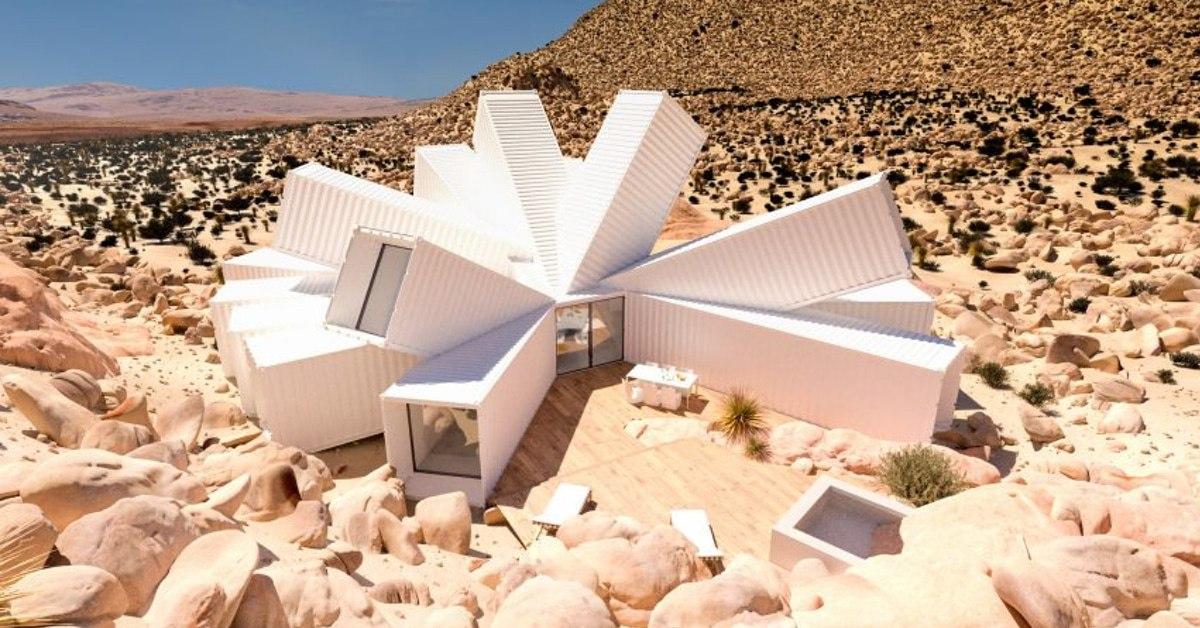 Commissioned by an unnamed — but likely wealthy — film producer, the structure is the final stages of the design phase, and construction will begin in 2018 on a private site less than a three-hour drive from Los Angeles.
The starburst-like design, by London architect and digital artist James Whitaker, has a curious origin: “It all happened during a road trip that the client took in the Joshua Tree desert, where they own a 90-acre site,” he said in a phone interview.
“One of the friends who was with them said ‘Do you know what would look amazing here?’, opened Pinterest and showed them a picture of Hechingen Studio, an office building made of containers that I had designed years earlier.” 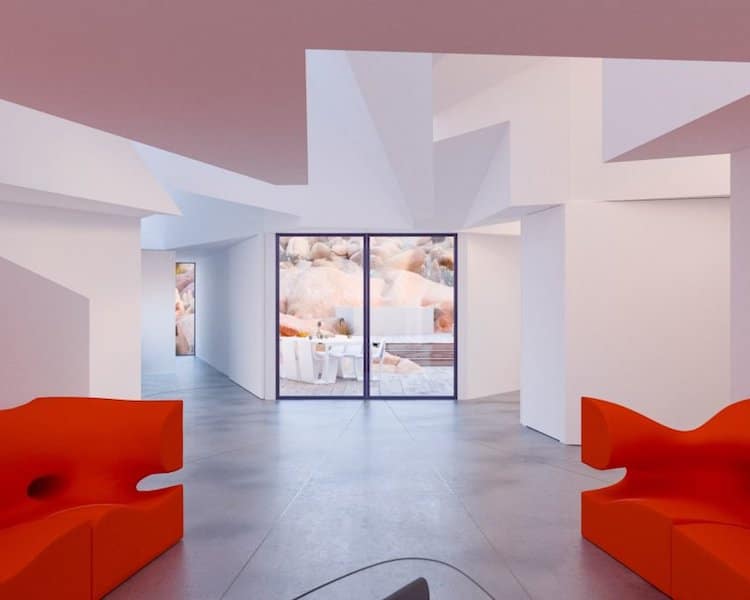 It was a low-cost workplace in the Black Forest, Germany, just outside the town of Hechingen, created for a German advertising agency in 2010.

“Their idea was just to stack the containers on top of one another, like in a port. I thought it didn’t really go together with a dynamic advertising agency, so that set me off thinking about utilizing the containers in a more intriguing way.”

The Joshua residence containers will be welded together by the same metal workers who built “Mirage,” an art installation by Doug Aitken in the Coachella Valley that is essentially a ranch house composed of reflective mirrored surfaces, or “a very nice looking thing,” as Whitaker put it. 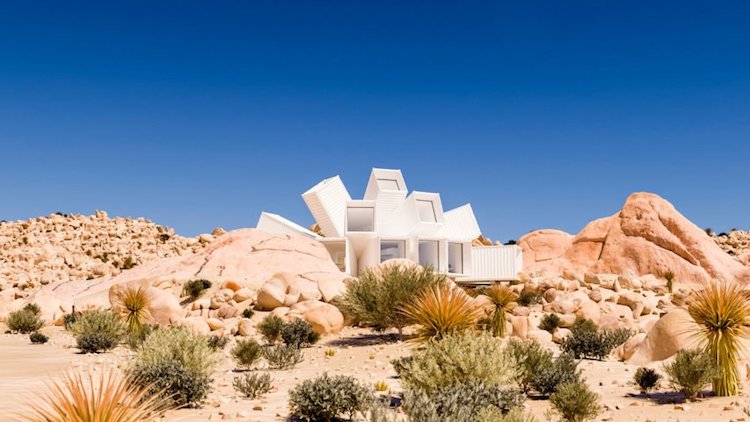 “Once they cut the containers up and weld the whole thing together, all the normal steps will take place, like insulation and plaster boards,” explained Whitaker.

For the interiors, the containers were put at an angle that allows for interesting views from the central section of the house: “There’s been a lot of care taken in aligning the internal halls of the containers, so when you go into the house at the start of the weekend and nobody else is there yet you can have all the bedroom doors open and enjoy standing in the middle and looking out into the desert.”

The complex will be powered by solar panels that will form the canopy of the parking area, and will include a wooden deck designed to blend with the surrounding rocky terrain. 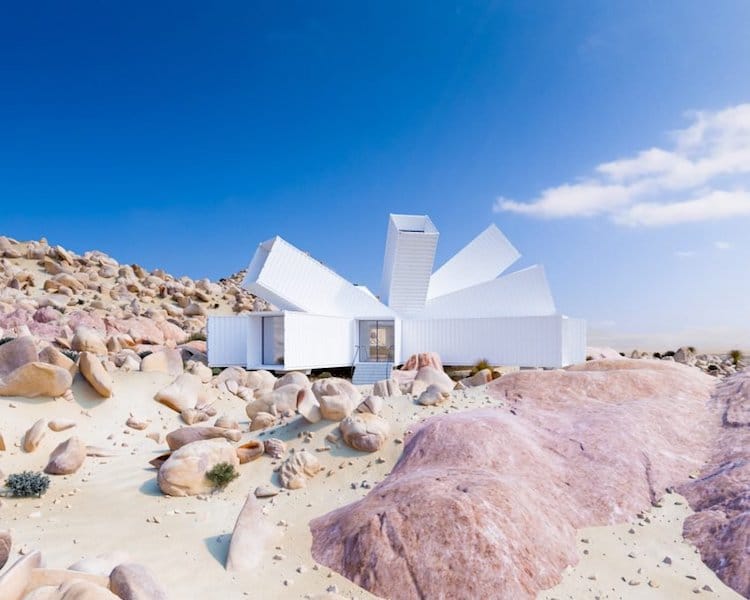 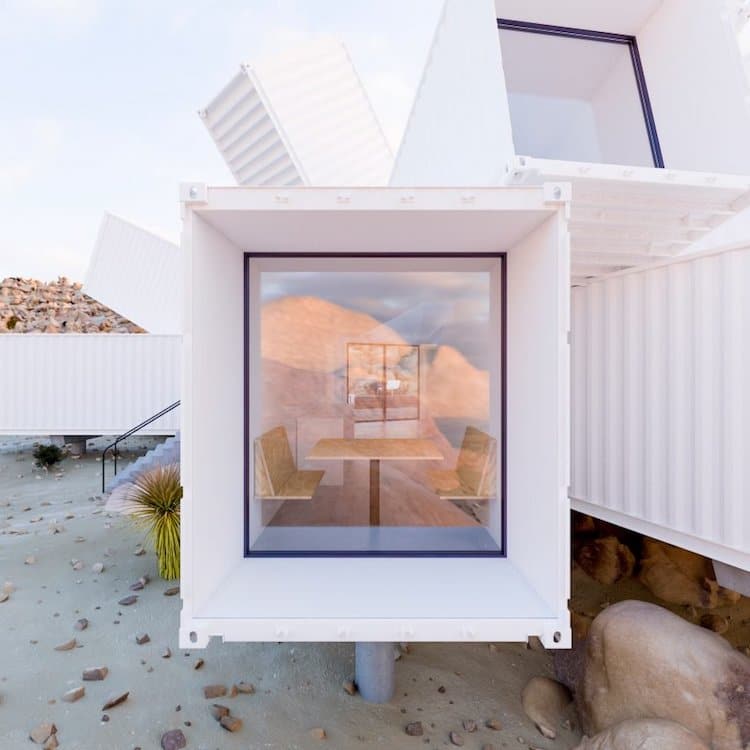 The dwelling will house a kitchen, dining area, living room, and three bedrooms across 2,153 square feet, complete with concrete flooring, white-washed walls, and a minimalist aesthetic. The furniture will be made using plywood, including a unique set of “Misfits” seating created by Ron Arad (one of Whitaker’s former employers). The build was conceived of with the goal of connecting the home to the desert using wide square windows while also providing a sense of escapism in its protective and private cubic structure. 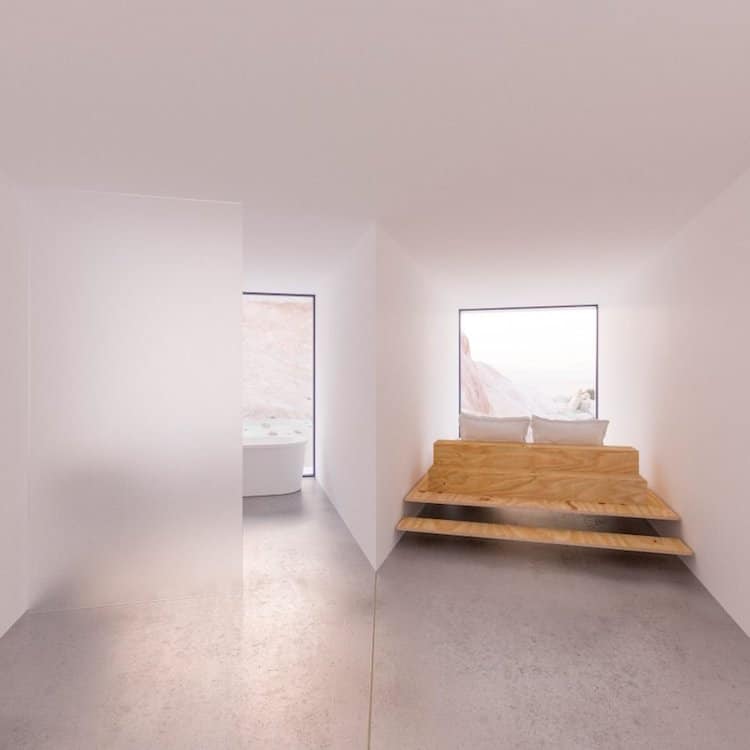 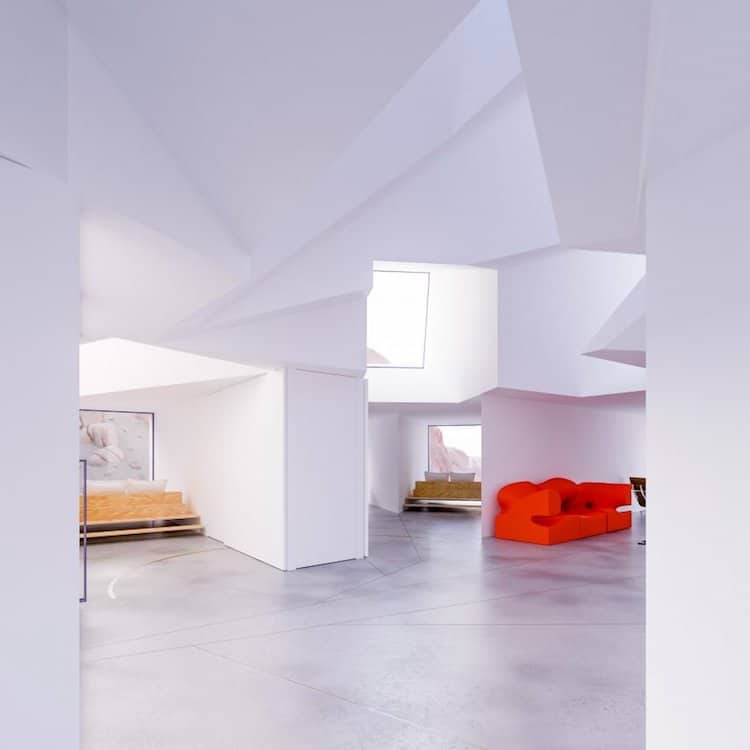 Nearby, you’ll find a carport equipped with solar panels, which will generate power for the entire structure, making the house sustainable and eco-friendly. The client also wanted a hot tub to be included in the design, so one is being built into a sheltered area outdoors to protect its users from the desert sands.

Each shipping container has been carefully placed by Whitaker Studio to maximize views or create privacy. 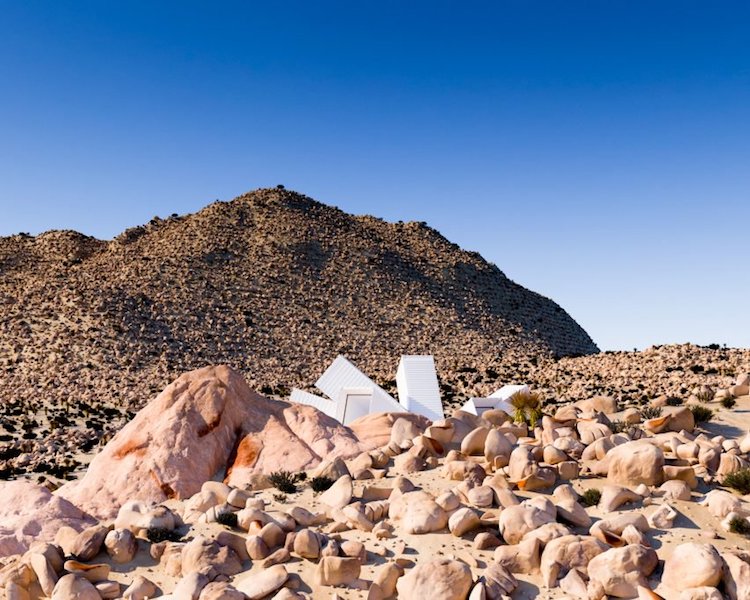 James Whitaker is a London-based architect and designer who originally came up with the cargo container starburst structure for Hechingen Studio, an advertising agency based in Germany, back in 2015. As a visionary in the field of photography, Whitaker tends to fuse his physical work with computer-based images to create some truly unreal graphics. You can see just how beguiling Whitaker’s mind is by looking at the renderings he’s created for the Joshua Tree Residence. 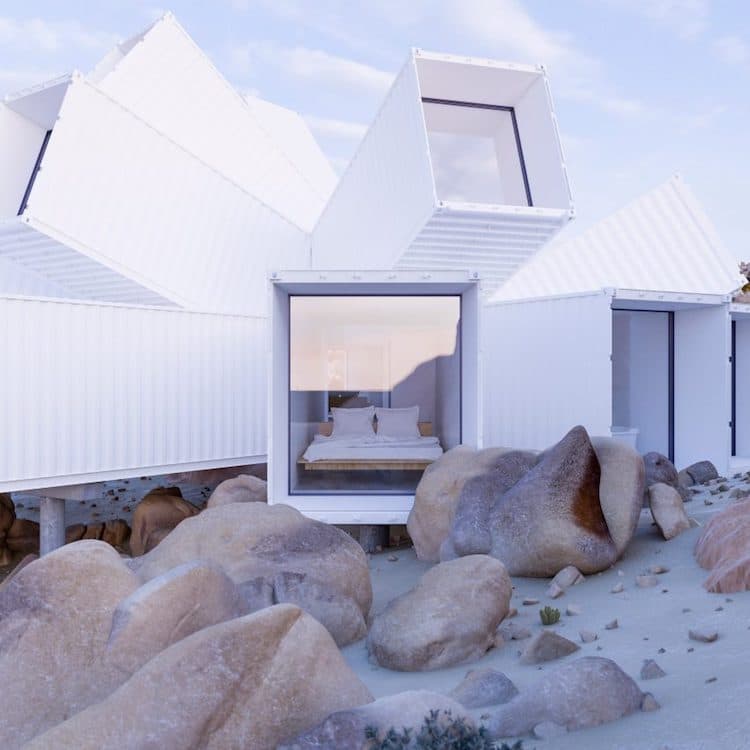