Architectural Designer Embedded A Modern Home Inside An Enormous Rock

Architect and photographer Amey Kandalgaonkar has reimagined the Mada’in Saleh necropolis located in Saudi Arabia through House Inside a Rock, the concept of a modernist each built within a rock. The idea of ​​the proposal is to pay tribute to the architectural heritage of past builders, who in this case, managed to successfully integrate the building with the natural environment.

In this way, the house seems to emerge from the rock and the concrete slabs alternate between the projections to shape a series of terraces that shape the living spaces. “Given the visual complexity of the rocks, it was imperative to use simple planes and cubes to achieve balance,” explains Kandalgaonkar, 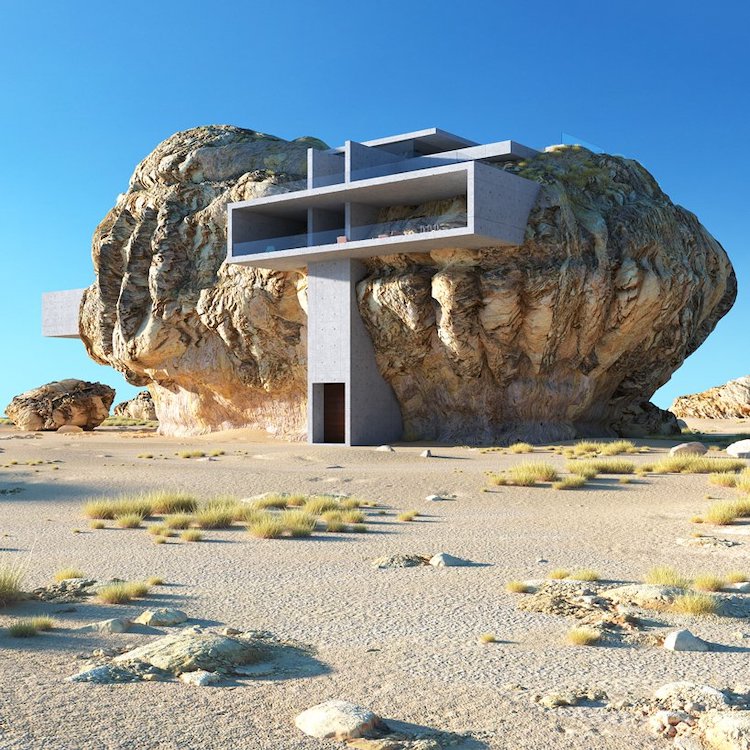 “Living the high life” takes on a whole new meaning when you’re actually hundreds of feet off the ground—especially when you’re literally one with nature. Even considering the idea of living in a home that hugs a rock formation or blends perfectly in with the trees around it is somewhat unbelievable.

For Architectural Designer Amey Kandalgaonkar, based in Shanghai, even the most inconceivable structures are possible with a little imagination. Looking out the @ameyzing_architect‘s fictional designs, it’s easy to dream up what they would be like in real life. The “house inside a rock” pictured below, for one, is a unique way of envisioning a life where natural formations aren’t seen as obstructive. 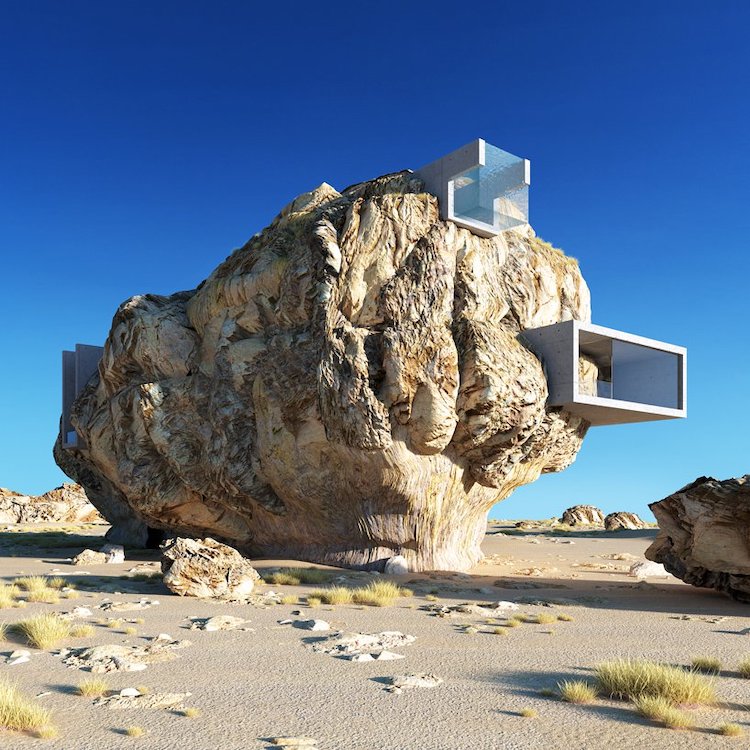 “The context of this project is inspired from #madainsaleh rock cut architecture in Saudi Arabia,” Amey shared in the Instagram post. Unfortunately, since this structure isn’t currently a reality, we can’t go for a home tour. But since the talented architect designer did “ask” for billionaires to help build it, I’m hoping there ends up being a few risk takers. 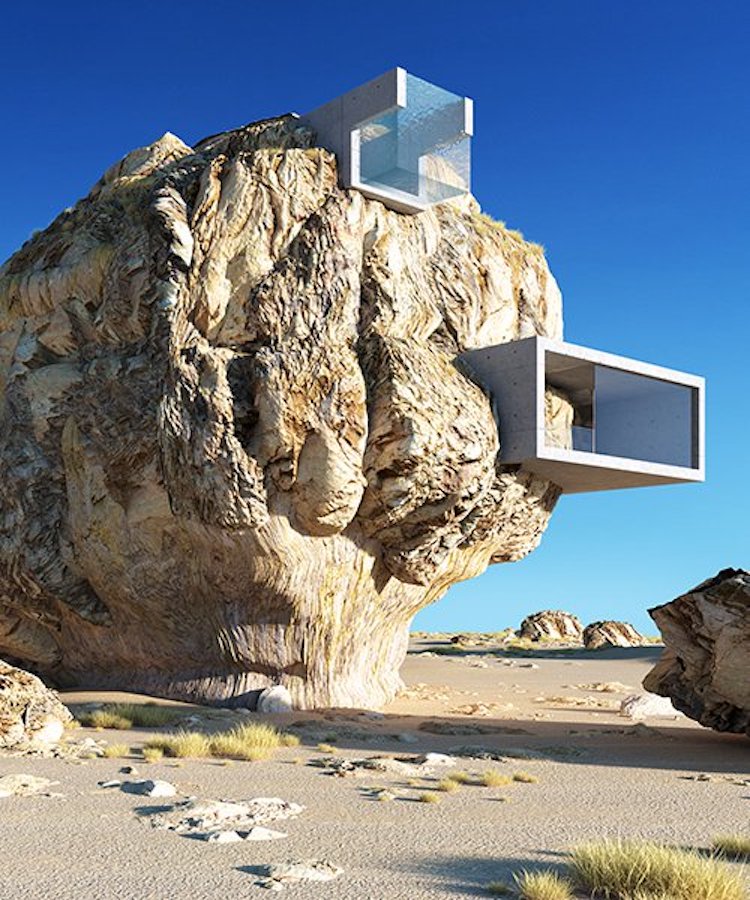 For the concept design, Kandalgaonkar designed an immense ground floor entrance shaft that connects an open air living space along the exterior with raw concrete slabs forming around the rocky protrusions.

The volume is topped by a terrace that leads to a higher set of terraces and swimming pool that is set on the top of the outcrop, situated next to a shaded penthouse. 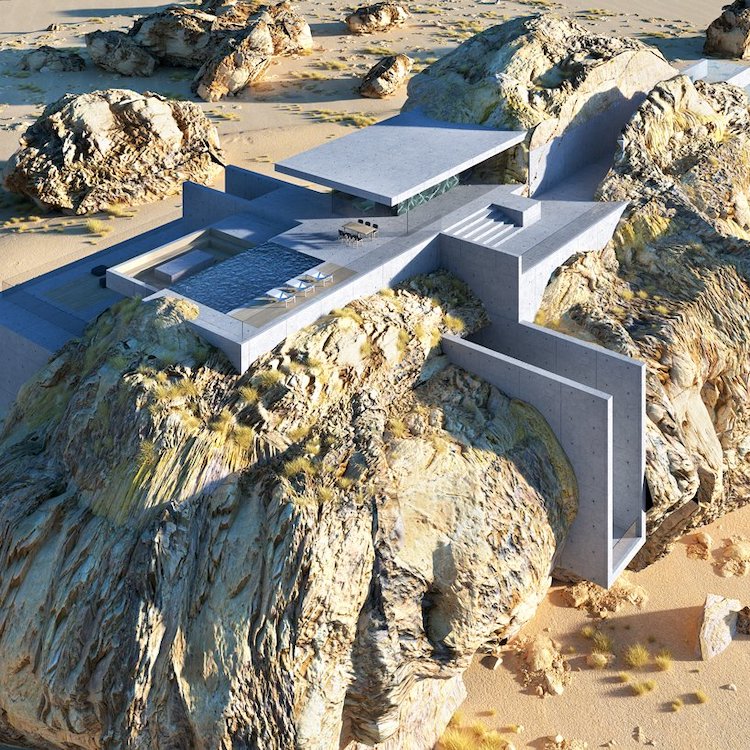 Amey told DesignBloom, “It was imperative to use simple planes and cubes in order to achieve a visual balance. I started out creating the rock in 3D software, which in itself was a sculpting process. Later, when inserting the house into this rock, I tried to keep its visual impact from eye level as minimum as possible and only when observed from a bird eye, the real extent of the intervention is revealed.”

And the aerial view really doesn’t disappoint. From above, this incredible structure features an incredible infinity pool, sun loungers, a dining area, and plenty of space to entertain. 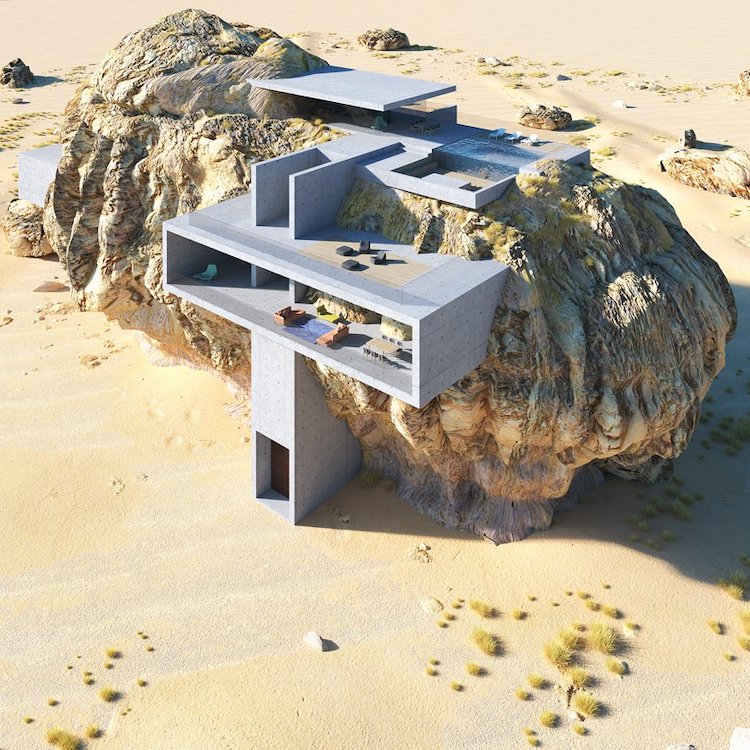 “Considering the visual complexity of the rocks at Madain Saleh, it was imperative to use simple planes and cubes in order to achieve a visual balance,” said  Kandalgaonkar .

“When inserting the house into this rock, I tried to keep its visual impact from eye level as minimum as possible and only when observed from a bird eye, the real extent of the intervention is revealed,” he added.