There’s an aviary in every silverware drawer. Robins, kingfishers, owls, jays, blackbirds… It just takes eyes like those of South Carolina-based craftsman Matt Wilson to help distill them from imagination.

When most people visit a junkyard to see the garage, artist Matt Wilson (based out of South Carolina) transforms these scraps into several artistic pieces. He sees scrap metal as a unique thing.

Here are a few sculptures that are made from recycled silverware by Matt Wilson. Check them out below. 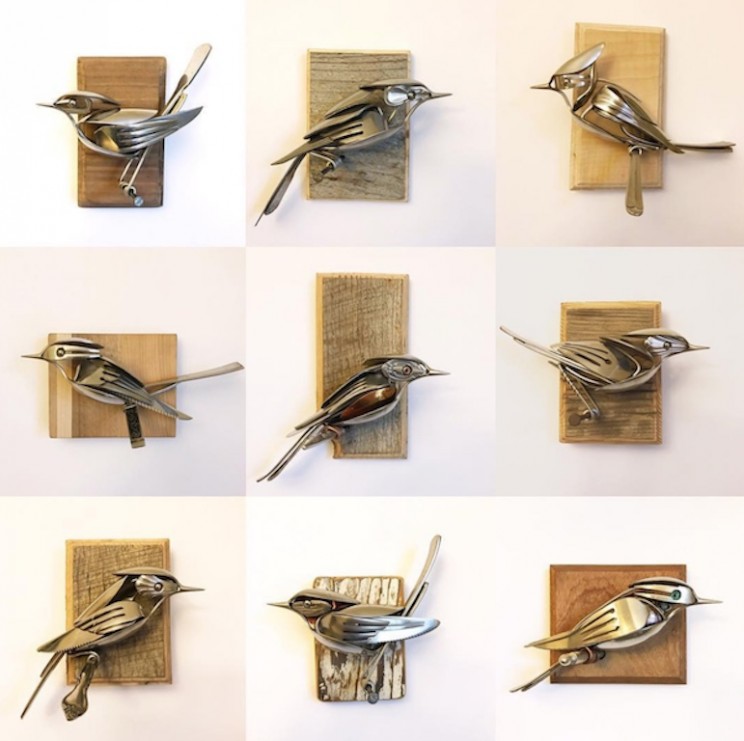 Matt Wilson was born and raised in Greenville, South Carolina, and from a young age showed, not only an interest in art, but an innate creative talent. His senior year of high school, he was accepted to attend studio arts classes at the Fine Arts Center of Greenville, the first specialized art school in the state.

From 2002 to 2005, Matt attended Winthrop University in Rock Hill, S.C., where he worked on an arts degree in drawing and painting. In 2006, Wilson was not only ready for a change in scenery, but also for a change in medium. He moved to Charleston, S.C. and became interested in metal sculpture and motivated to learn a new skill. 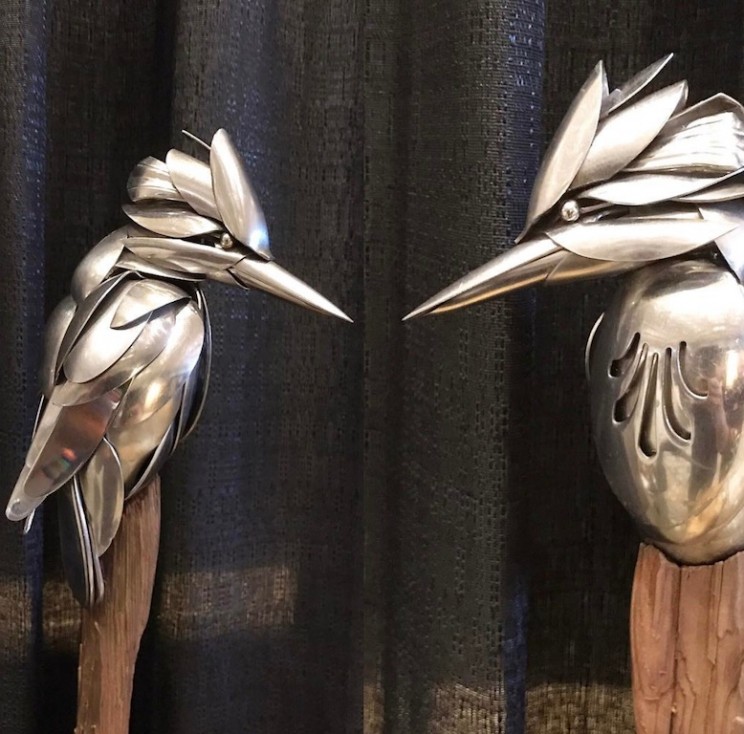 Artists can take inspiration from just about anywhere. As the creative, veteran journalist Bill Moyers stated, “Creativity is piercing the mundane to find the marvelous.”  One might look at a bunch of forks and knives and see just your daily utensils, however, South Carolina based upcycling artist Matt Wilson sees something entirely different.

For the uninitiated, upcycling, also known as the process of creative reuse, is the process transforming waste materials, useless or unwanted products into new materials, art, or sculptures. 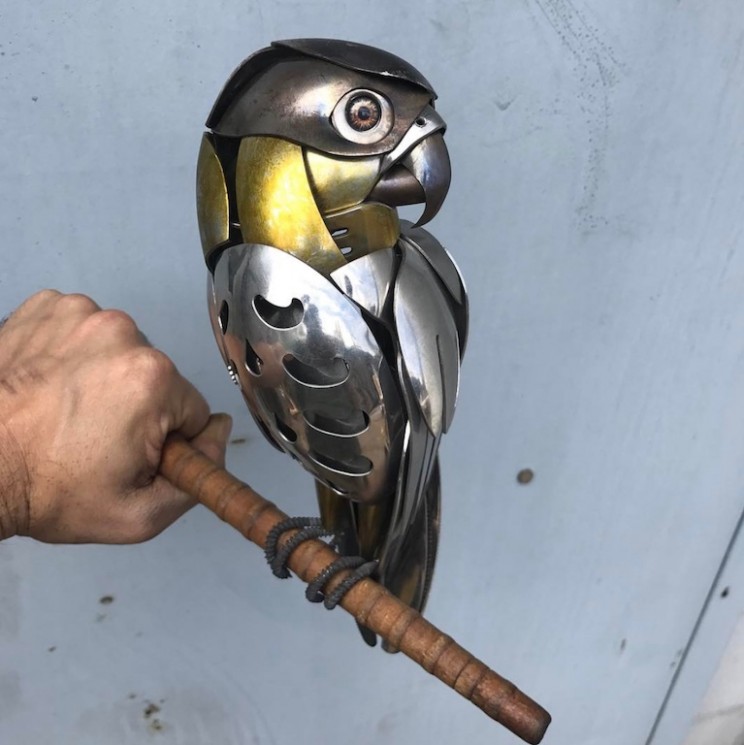 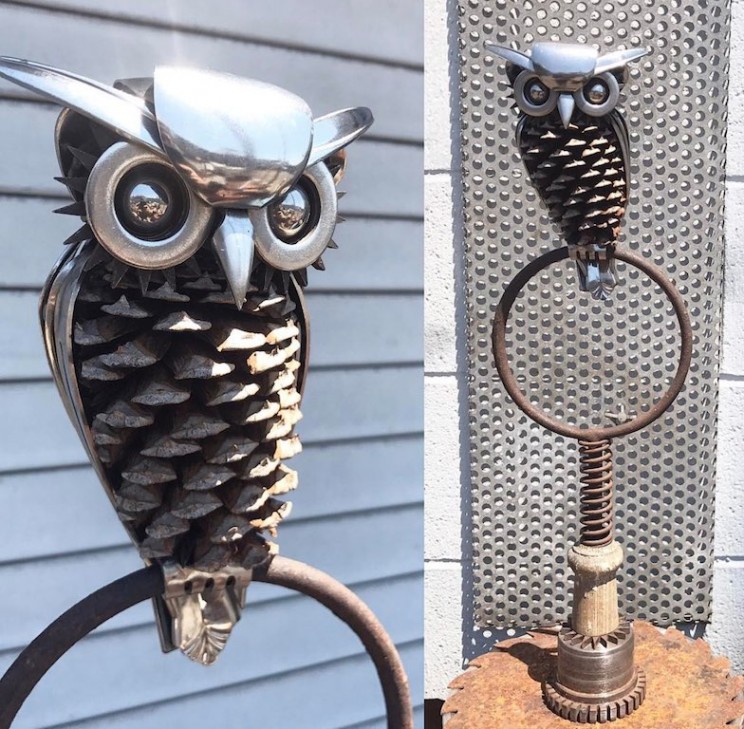 The resident artist explained his vision stating, “The upcycled work I create is a testimony to the belief of conserving and appreciating our resources.” He continues by saying, “Using organic and recycled materials – bone, driftwood, scrap metal, etc., my sculptures depict continuous life cycles that consciously and unconsciously permeate our awareness.”

It almost seems like there is nothing Wilson cannot create with his materials. Though a majority of his work has brought to life elegant bird inspired sculptures, the occasional samurai, fish, and other forms of wildlife do appear in his sculptural work. Some of his other sculptures include metal insects, lobsters, fish, and octopi.

Some of the birds that he has depicted include traditional woodland robins, owls, blackbirds, robins, blue jays as well as fierce birds of prey like eagles. 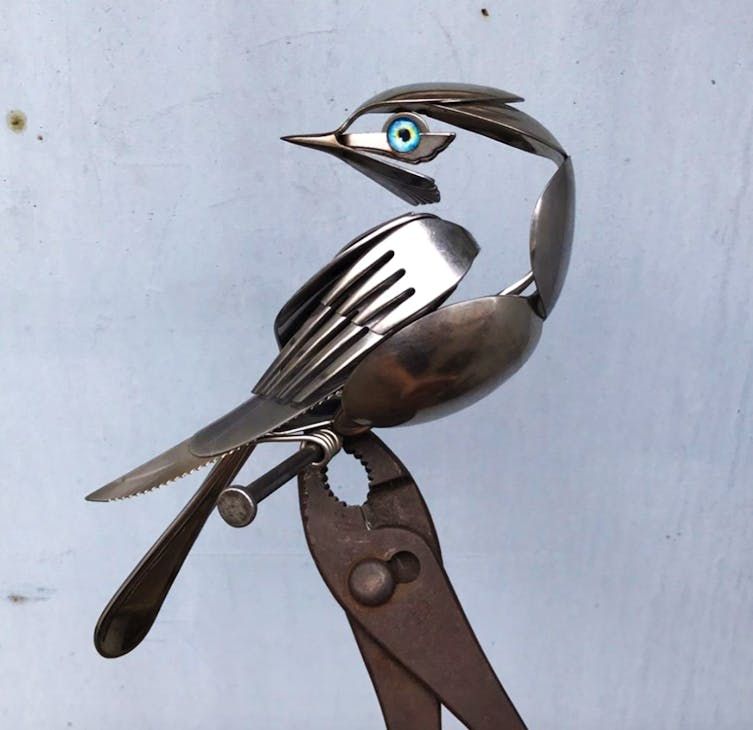 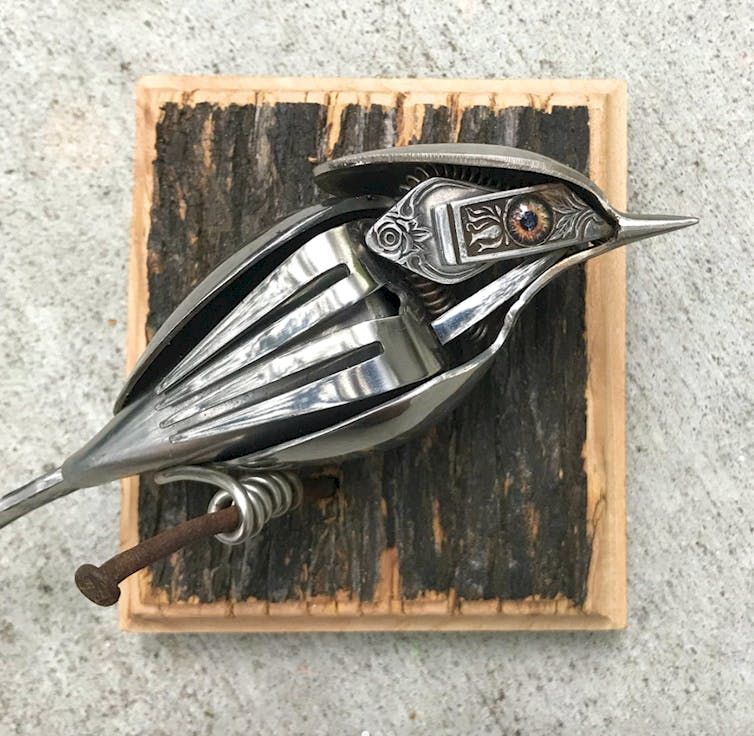 The process of creating these sculptures is not easy. On top of the immaculate craftsmanship, Matt Wilson spends a lot of time collecting and finding the right materials for his ideas.

Wilson breaks down his goal by stating, “My goal as an artist is to make artwork, unlike art people have seen, while at the same time recognizable in the identity of everyday materials. I only hope the sculptures will inspire others to appreciate the simple, neglected items from which my creations are born.” 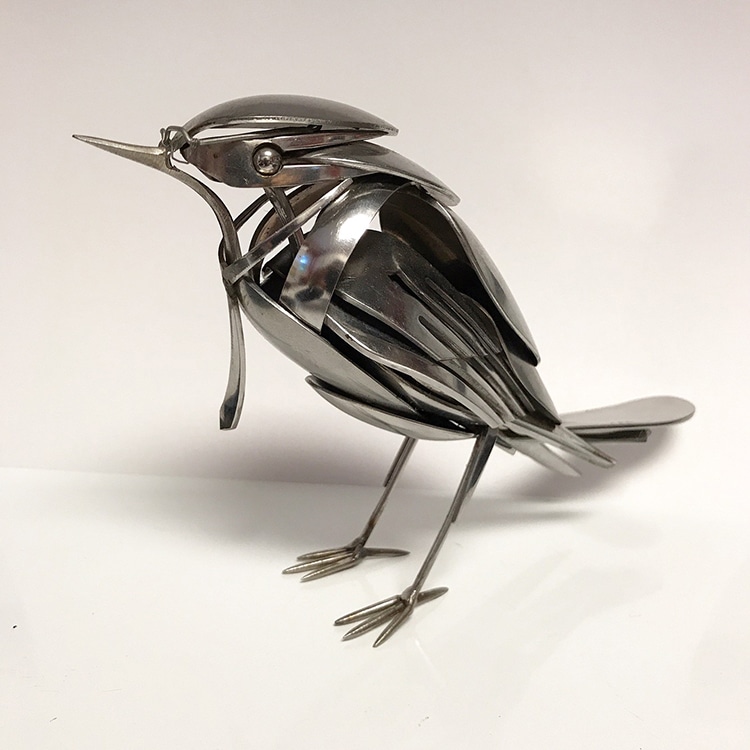 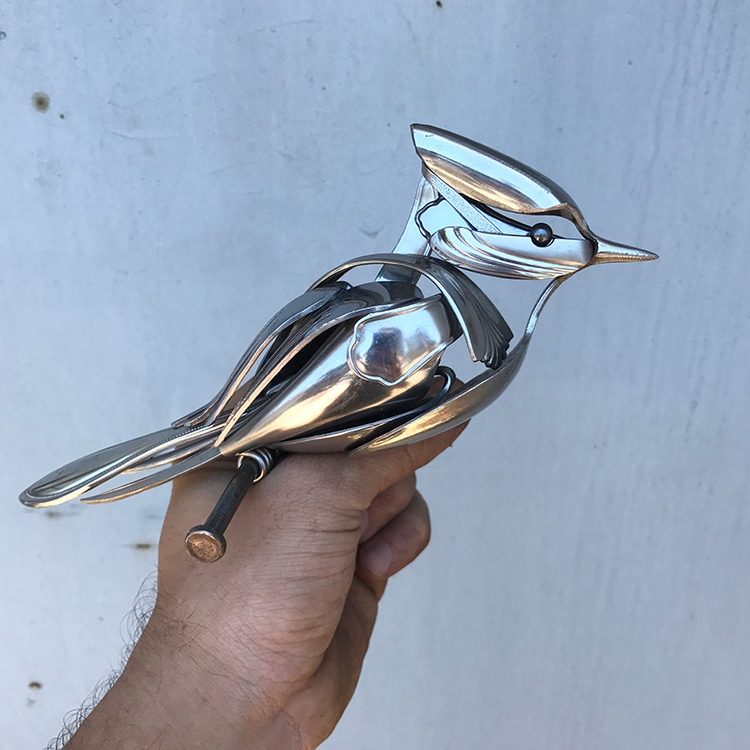 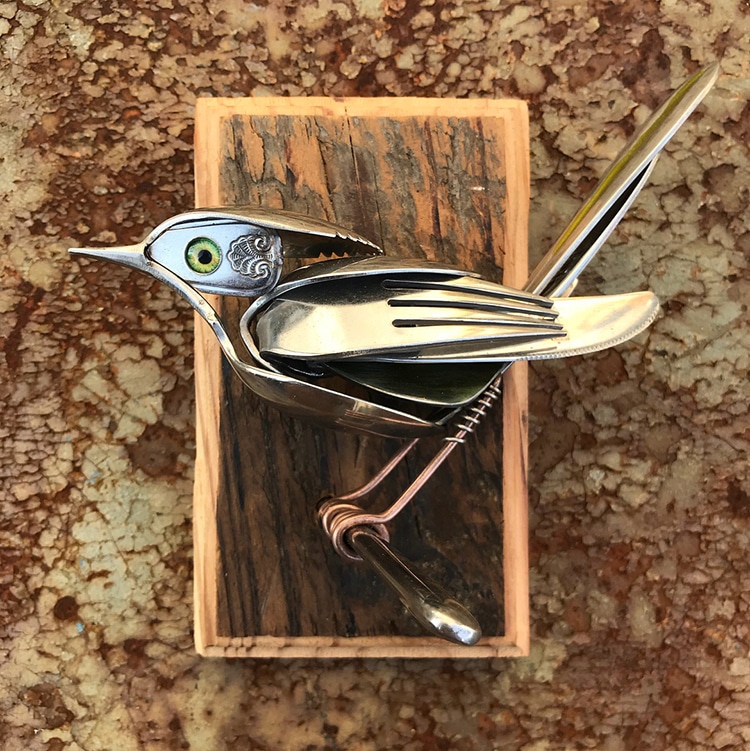 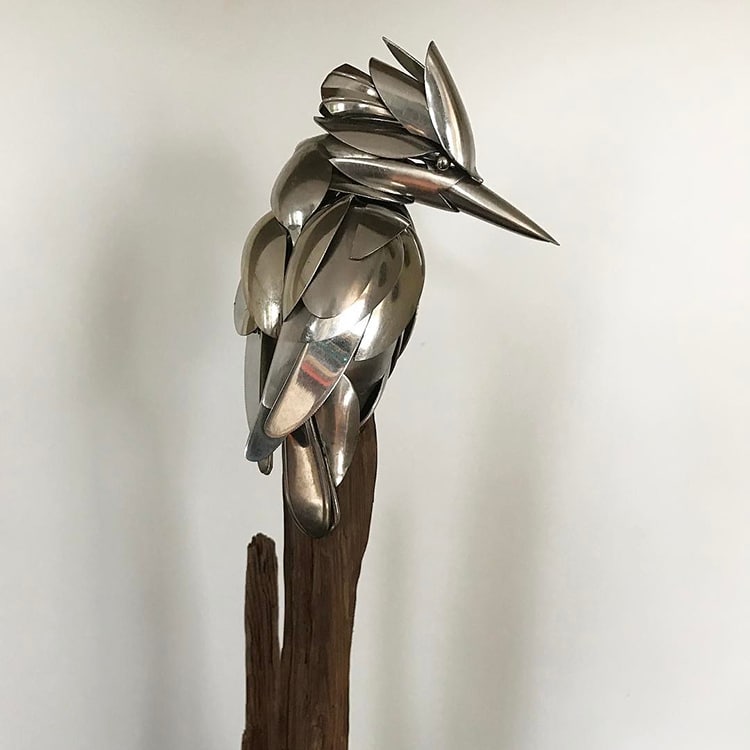 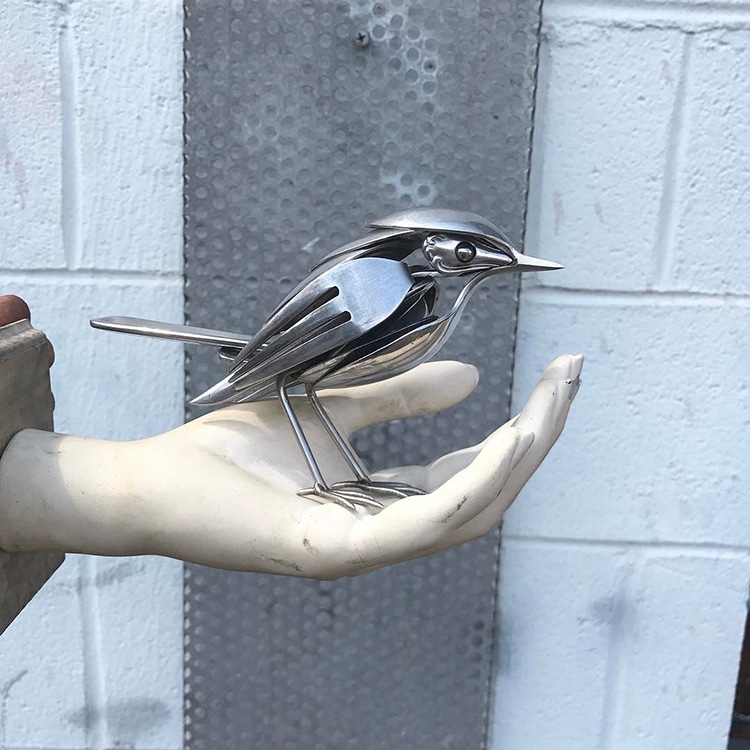 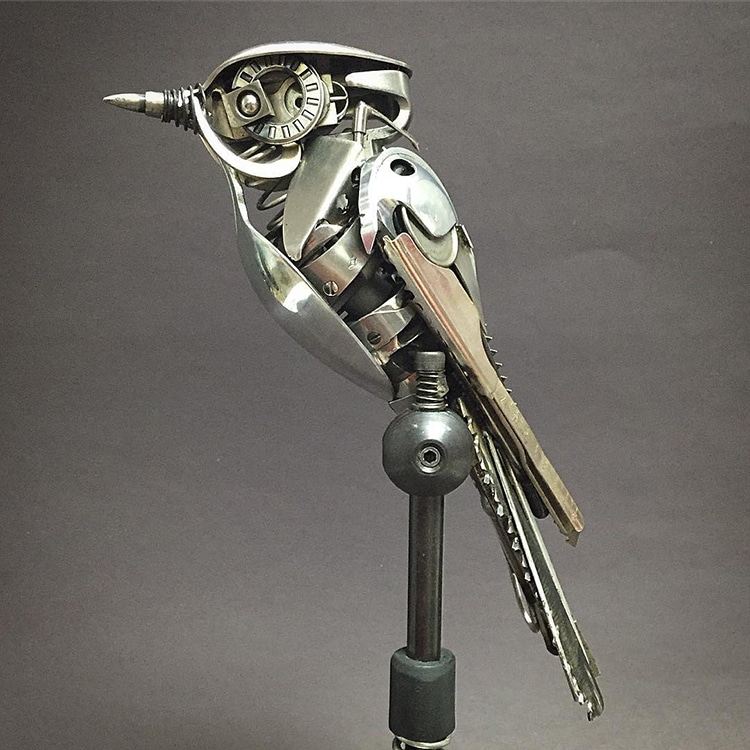 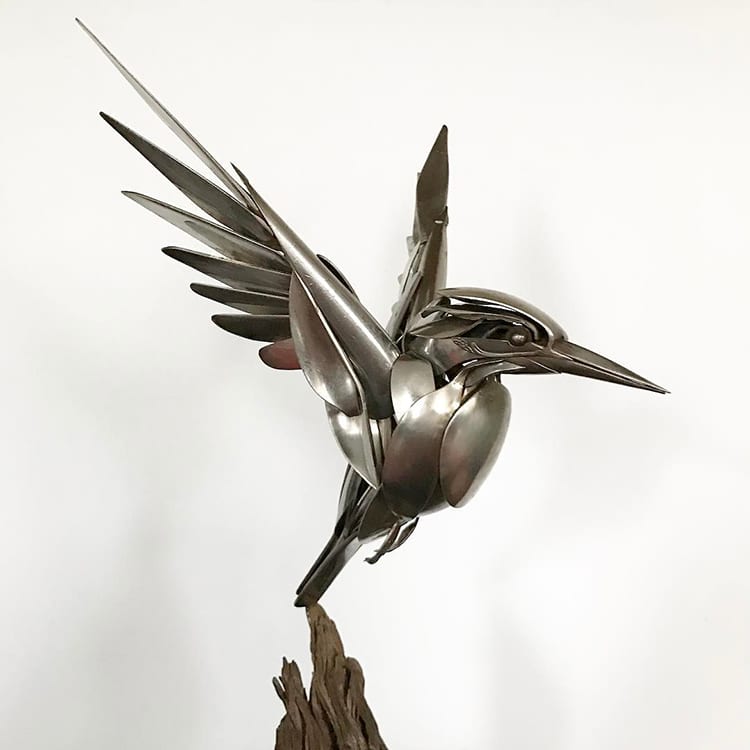 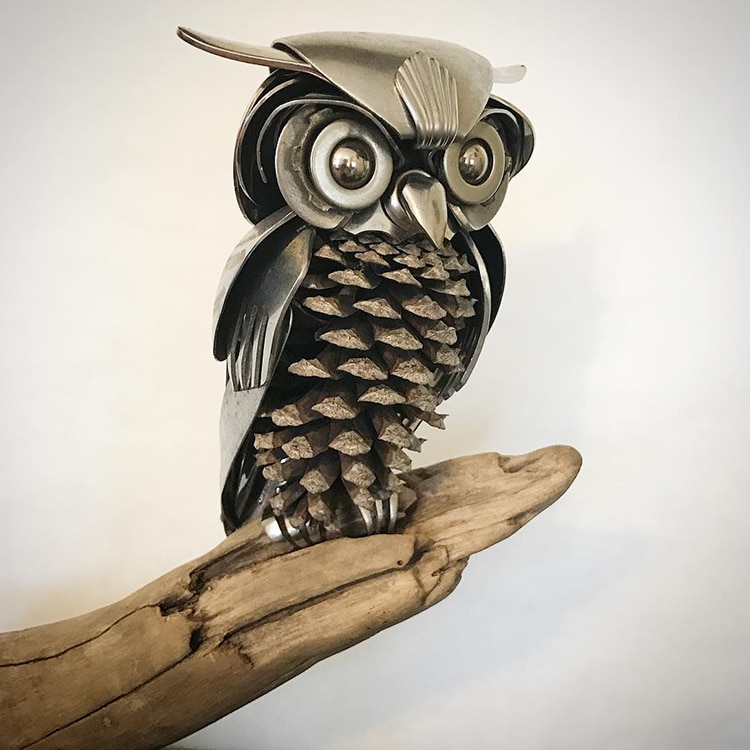 …to predatory and exotic birds. 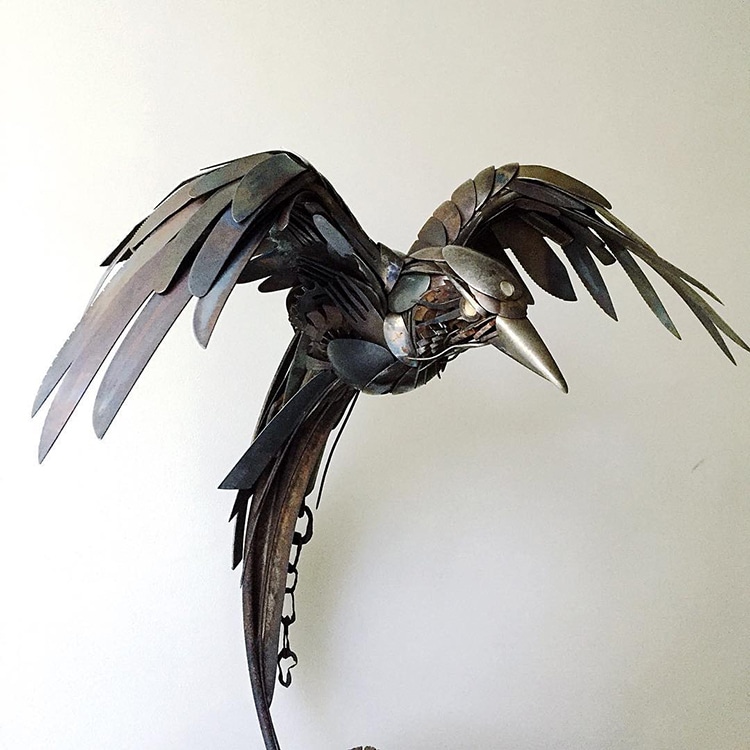 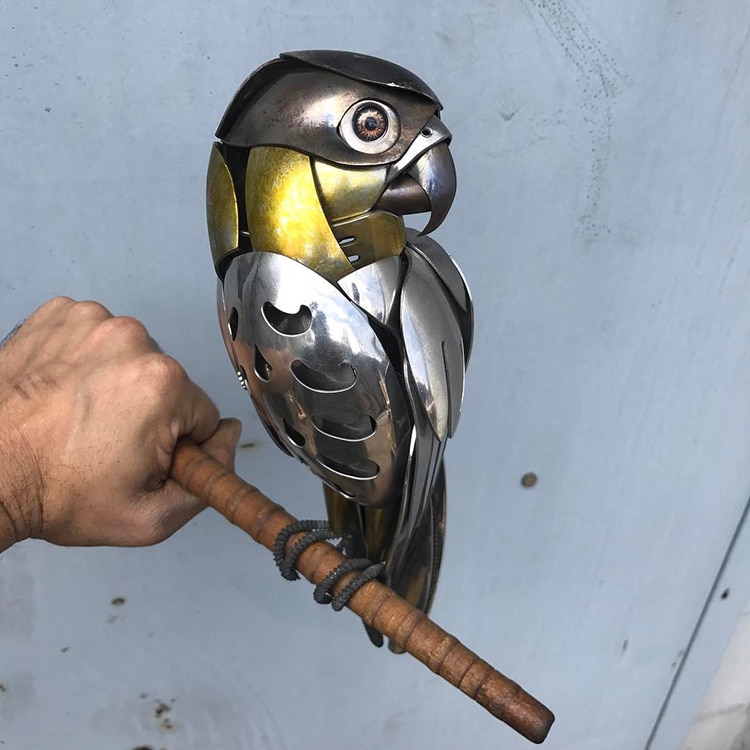 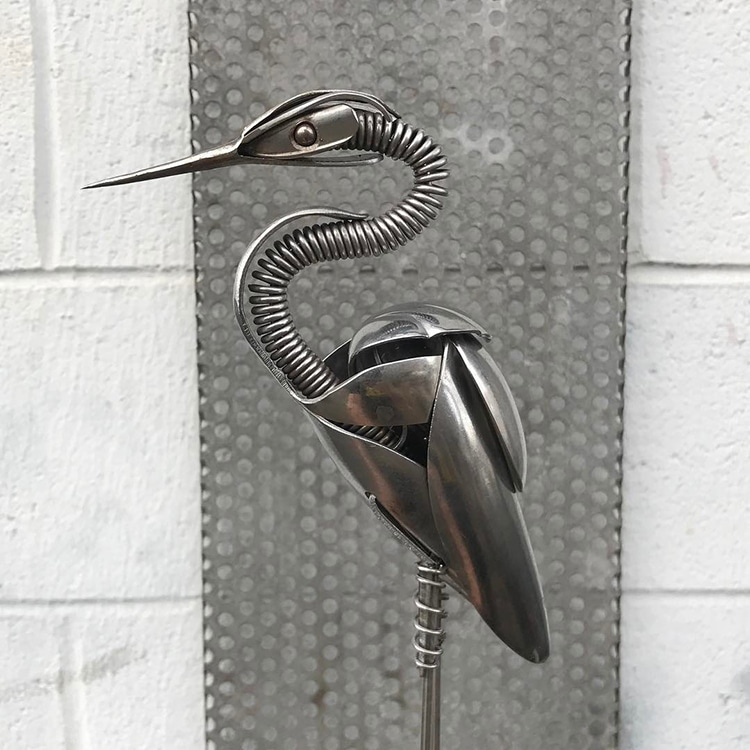 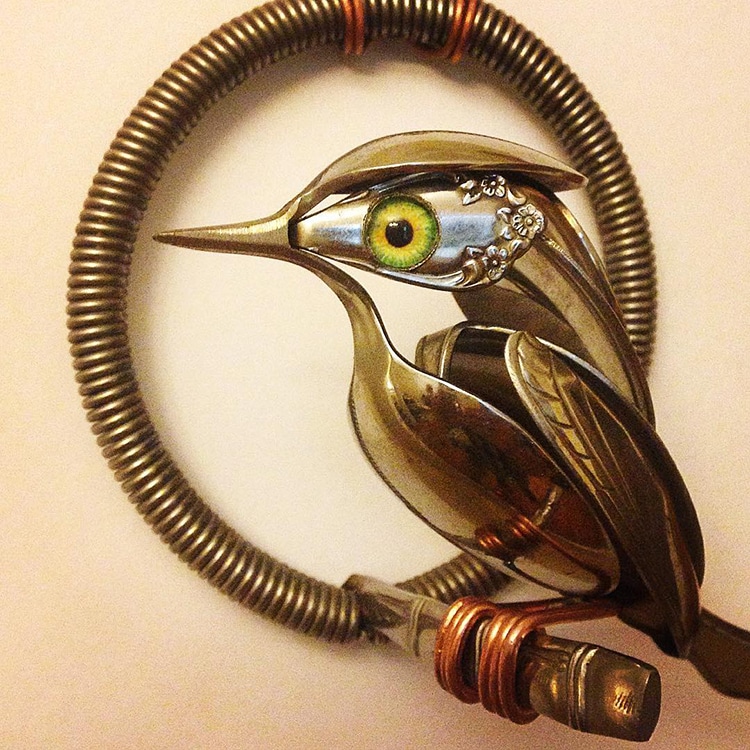 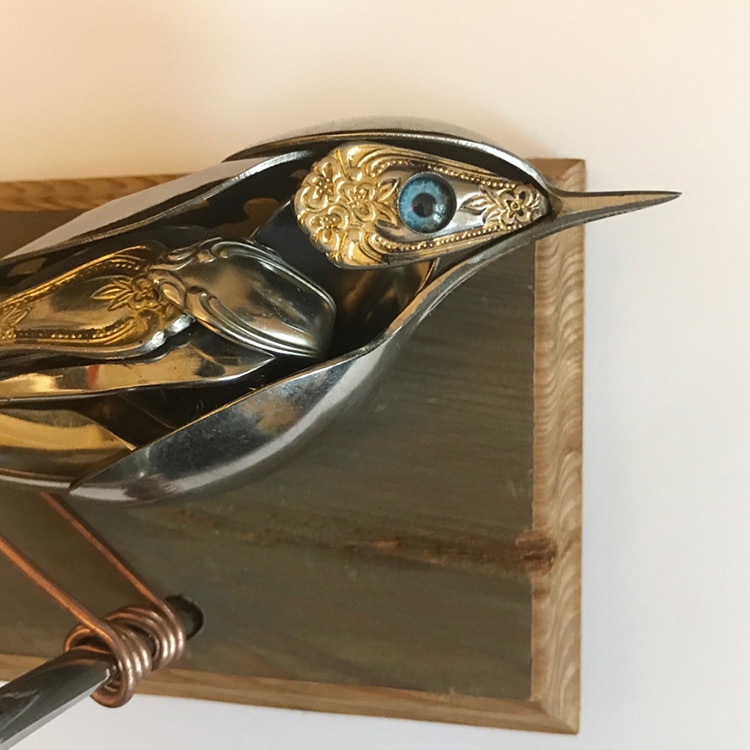 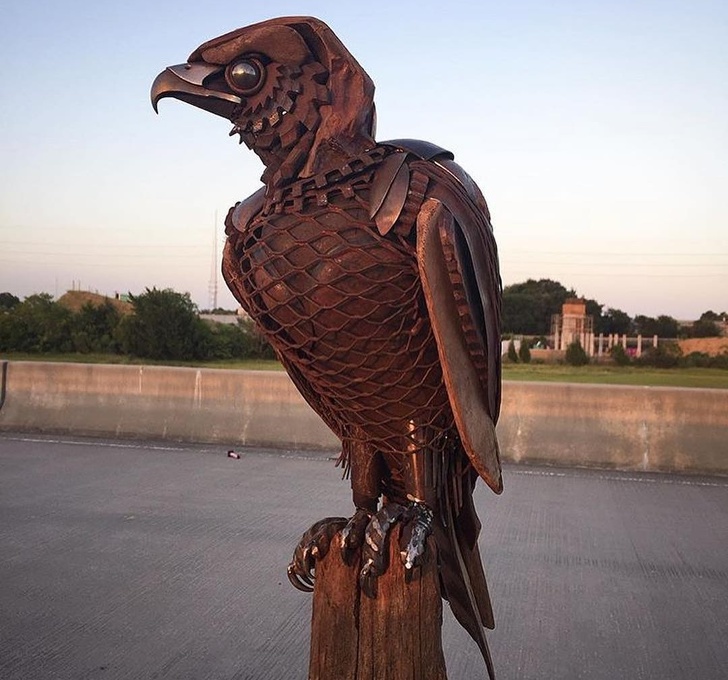 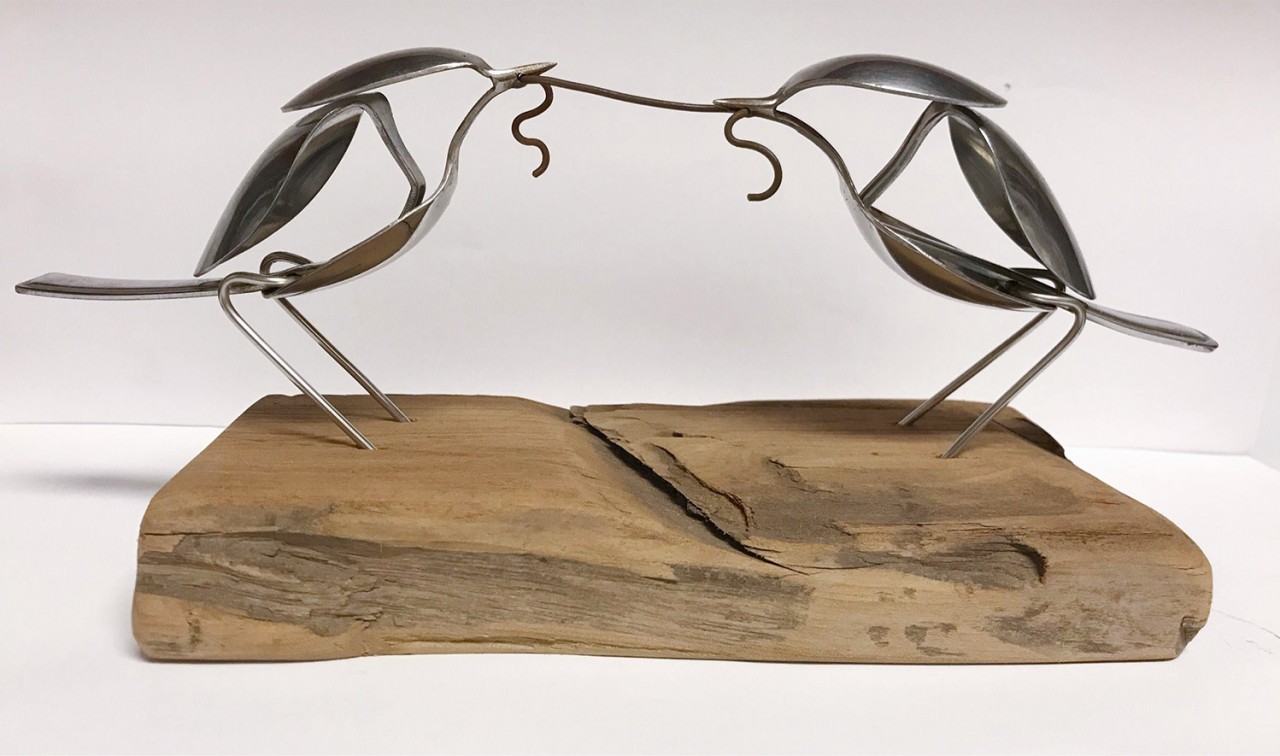 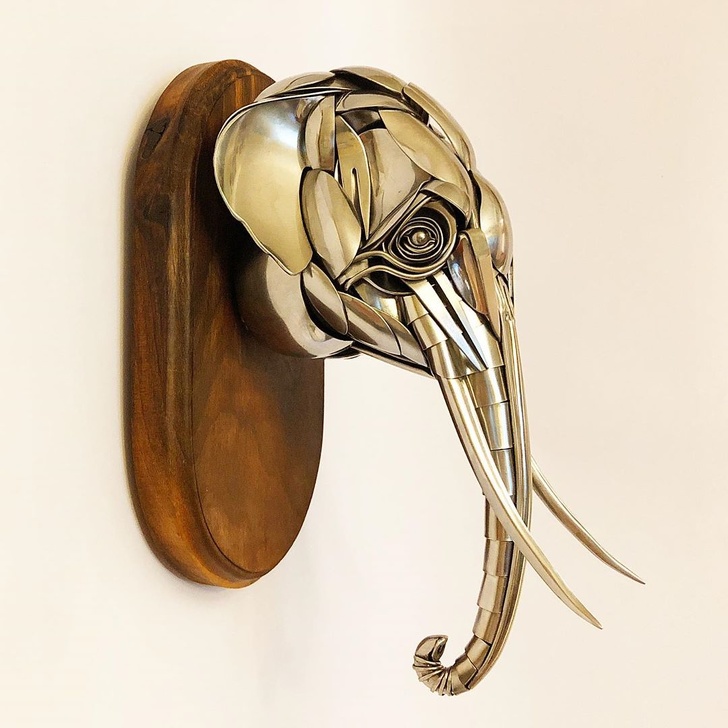 Wholesome Video: Dad Lion Meets His Baby Cub For The First Time And His Reaction Is So Adorable Previous post
The Aussie Pink Robin Is One Vibrant, Adorable, And Very Round Little Bird Next post