If nothing good comes out of this lockdown, one thing is for sure – it has definitely unleashed that hidden creative part of so many people, which now have plenty of time on their hands.

We’re seeing some cat owners pass the time during the quarantine by building cardboard tanks for their adorable cats. Some of these are incredibly detailed and show a lot of love for crafting! To brighten up your day and inspire you for some DIY projects, we’ve collected the very best cat tank pics. Scroll down, enjoy, and don’t forget to let us know which ones are your faves. 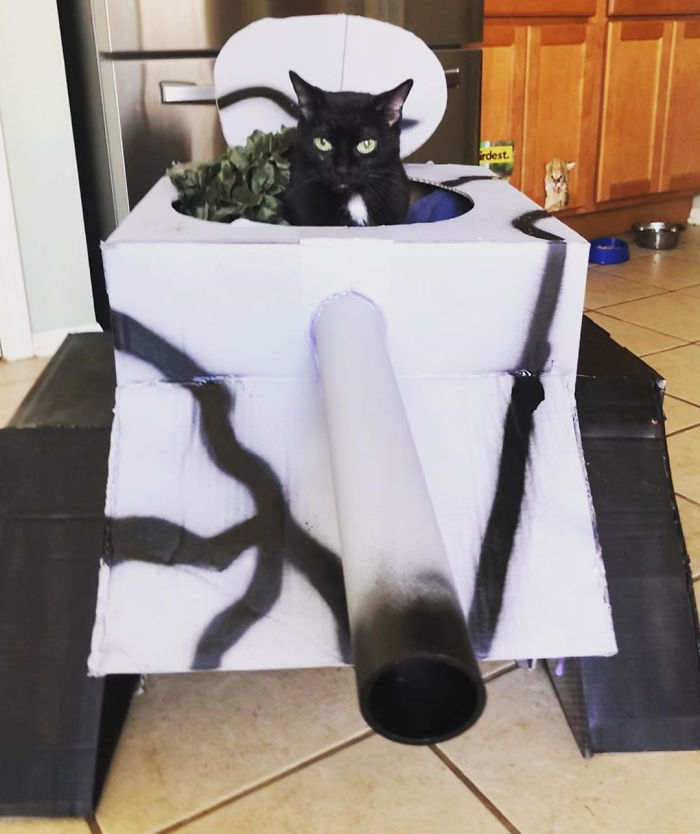 “Someone in my Facebook newsfeed had shared a picture of a cat in a tank a while back,” Garry revealed. The idea had been stuck in his head for a while and he was planning to build a tank for his cat once he had the time. It took him around 3 hours to craft “at a leisurely pace” and Garry pointed out that his cat loves boxes and cardboard.

Garry told us that his cat is a 2-year-old female named Mittens. “She is mostly calm and collected, apart from when we all go to bed, then she runs about the house like a maniac,” he said. “She also takes a toy to the top of the stairs around 1 AM every night and howls which is both annoying and cute.”

Speaking of the impact that quarantine has had on Garry and his family, he said, “I work from home anyway as a graphic designer, my wife is a carer with a Scottish charity, so it’s business as usual for us. We do have two kids around all day every day, but they’re pretty good at amusing themselves and can video chat with their friends. Overall, we can’t complain, others aren’t so lucky.” 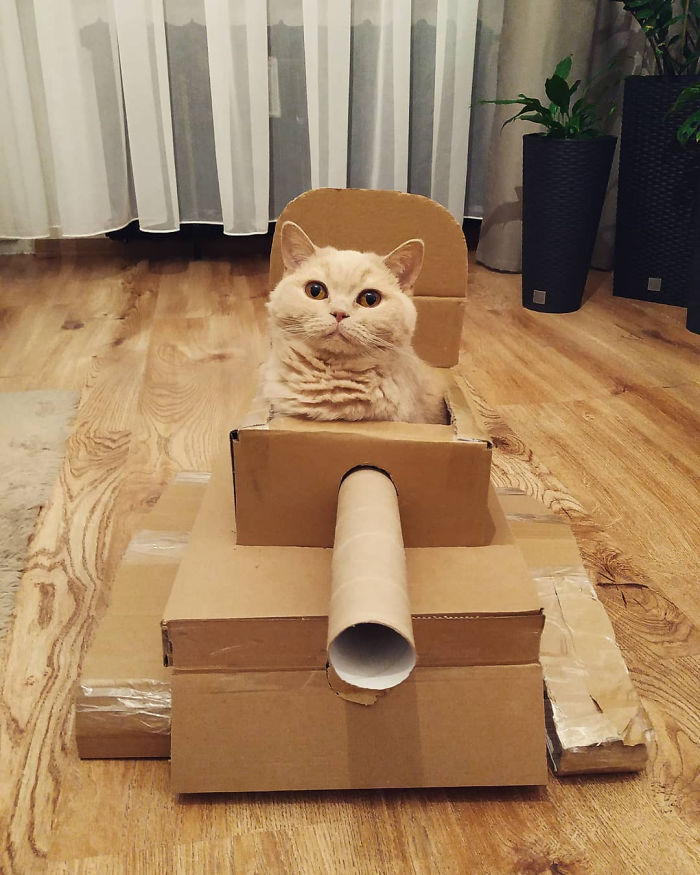 Credits: bettinabakes – I’m ready to beat the virus, and you? Have you your own tank?

The British Veterinary Association (BVA) recommends that pet owners keep their cats indoors to prevent the spread of the virus, especially if someone in the household shows symptoms of Covid-19. However, the president of the BVA Daniella Dos Santos told the BBC that all pet owners should “practice good hygiene” because “an animal’s fur could carry the virus for a time” if the pet came into contact with someone who’s ill.

Even if you’re not building cardboard tanks for your cat, there are other ways to keep it happy and feeling meowsome. USA Today writes that it’s very important that your pet eats well during the lockdown, so make sure you’re stocked up with cat food and snacks. 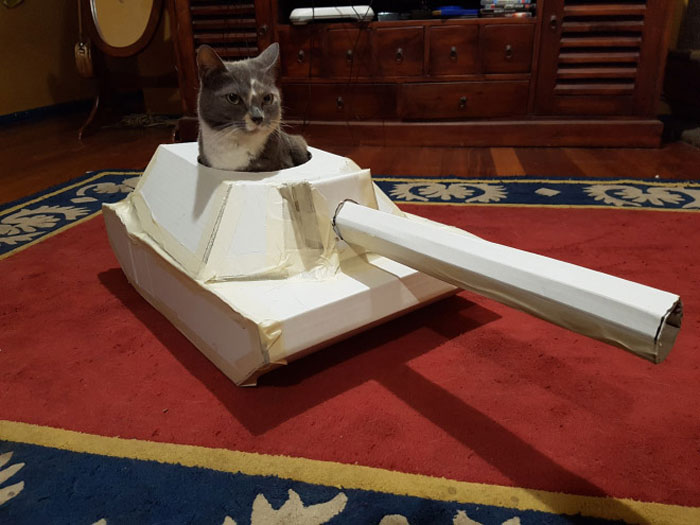 Apart from awesome crafting activities, the quarantine has had another positive result: animal adoptions are way up in the US. Vox reports that animal shelters all over the US were overwhelmed with applications to adopt cats.

“We put a call out for fosters on March 13, when everything kind of was really starting to hit full steam,” Katy Hansen, communications director for the Animal Care Centers of New York City, told Vox. “All we knew was that we needed to get as many animals out as possible because we didn’t know how this would affect our staff. We thought we would get 50 applications. We got 5,000.”

Hansen expected the opposite; she thought that people would leave their animals at shelters instead of adopting them. Meanwhile, the American Society for the Prevention of Cruelty to Animals saw a 500 percent increase in applications to foster pets in New York and Los Angeles since March 15. 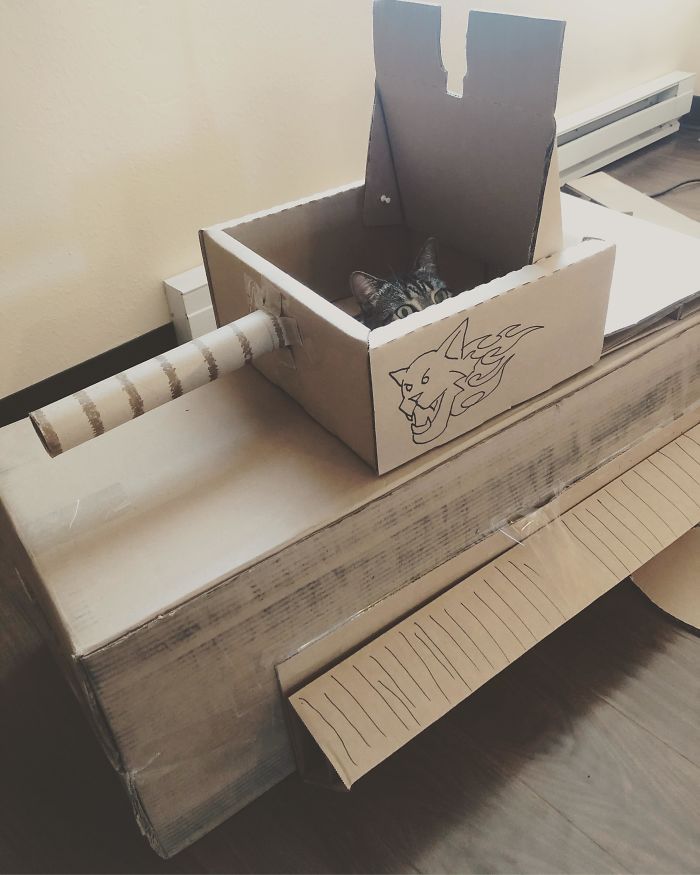 Credits: reddit.com – Inspired by another post to make my cat her own tank 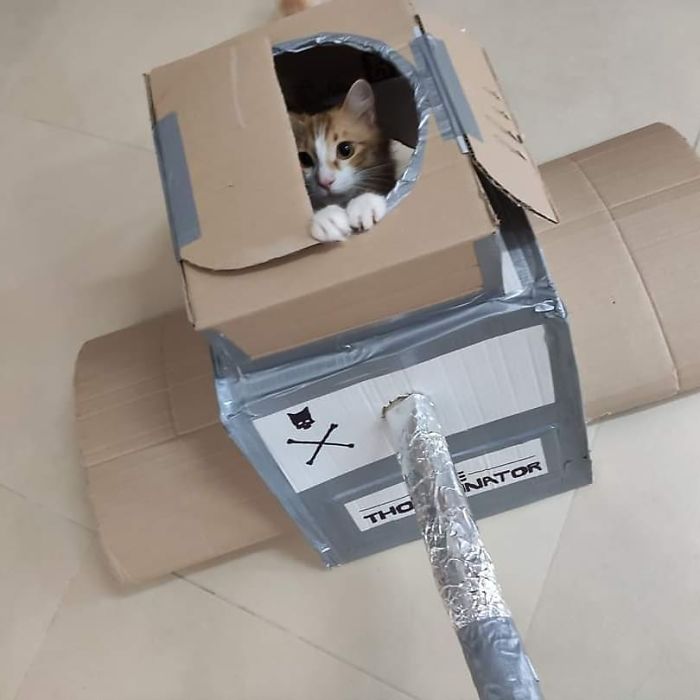 Credits: danielacordina – When you have a lot of time on your hands + many boxes + a curious adorable cat = The Thorminator. 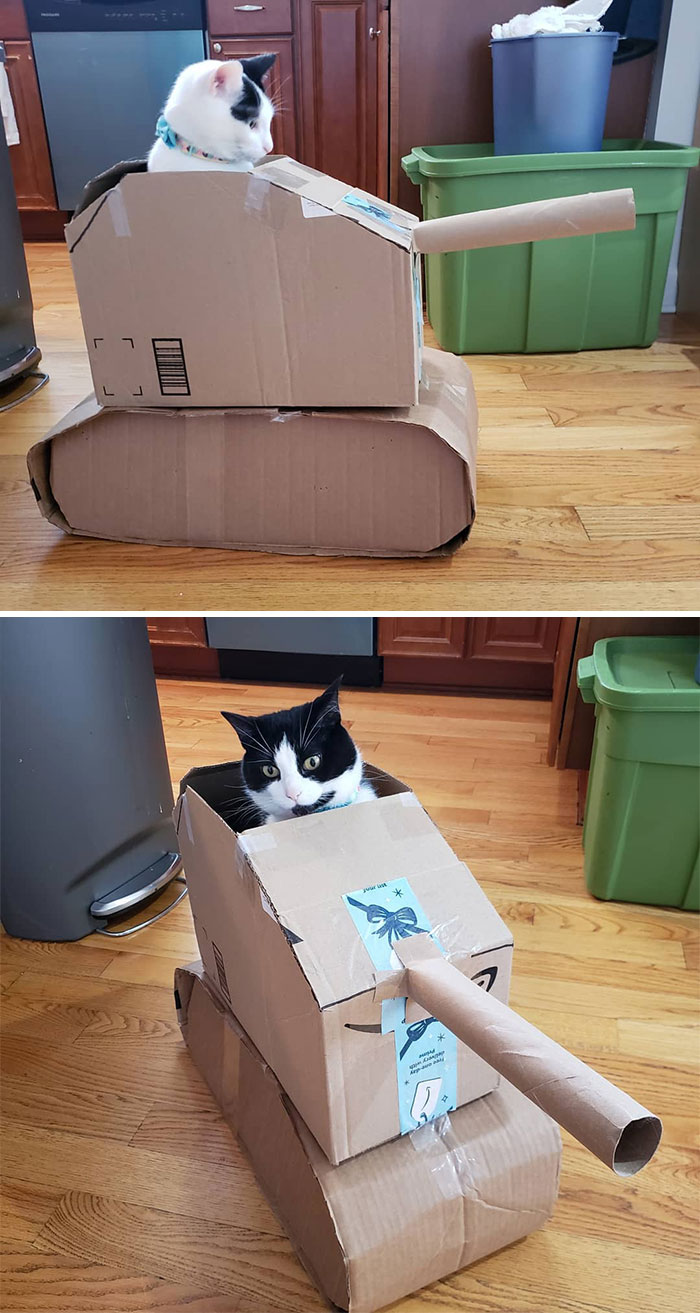 Anna spoke about how she built a cat tank for two cats Topsy and Turvy. “As any cat owner knows, with owning cats we tend to hang on to boxes for a while. Topsy in particular is very insistent on being able to examine any packages we bring in and testing out how good they are for sitting in after being opened,” she told us.

“We’ve started keeping various boxes in the different rooms of our apartment for them since they’re preferred over their actual cat beds. I’d seen the ‘cat tank’ meme online several times on social media. One evening, after finishing a role of paper towels (and finally having a potential gun for the cannon) I thought, ‘why not?!’ It took me about two hours one evening to build. Some of that was looking up different images for tanks, so whatever I ended up with was recognizable. Some of that was also finding enough package tape to use.”

Anna revealed that after her success with building the tank, she’s now turning her attention towards a new project: crafting a cat-Dalek. “The Dalek is taking a lot longer, I’ve spent about three hours so far and only managed the angled base section. I estimate it will take me another 6 to 8 hours including painting to finish.”

She and her husband adopted Topsy and Turvy from a foster rescue group in October 2016. “We think they’re about five years old now, and their birthday is sometime in July. They’re litter mates, brother and sister. They are definitely spoiled, both by ourselves and my mother. They get their own Christmas presents every year. Before the coronavirus, Topsy would sit on our front door mat every afternoon waiting for me to come home from work. That meant it was dinner time! He’s also the one to wake me up in the morning if I hit the snooze button too many times on the alarm. Breakfast cannot be delayed,” Anna went into detail about how wholesome life with the brother-sister cat duo is like.

“Turvy is our squishy love-bug. She is keen on grooming both my husband and I; we obviously don’t do very good jobs staying clean as humans. She also has mild feline asthma/allergies and has become quite adept at hiding when she detects us getting out her medicine,” Anna told Bored Panda. She revealed that when she originally started the Instagram page, it was hers, but then she realized that most of what she posted were pictures of her cats. So she converted it to their page and became their social media meownager because she has “opposable thumbs and they don’t.”

Anna also told us what life during the lockdown is like in Illinois. “With the ability to work remotely from home, it’s not been as huge a shift as it has for other people we know. Thankfully, we’ve also both managed to stay employed. I have family in the medical profession in the UK, so we’re well aware of the necessity of social distancing and reducing the potential to spread the coronavirus.”

Topsy and Turvy’s owner said that lots of things like social interactions, going to the movies or even to the local parks are out of the question. She also hasn’t been able to visit her parents. “I was supposed to go out to see my parents, my mum had several surgeries last year so this would’ve been the time to go see her now she’d recovered some. Obviously that’s on hold, so just lots of talking over Skype or email.” 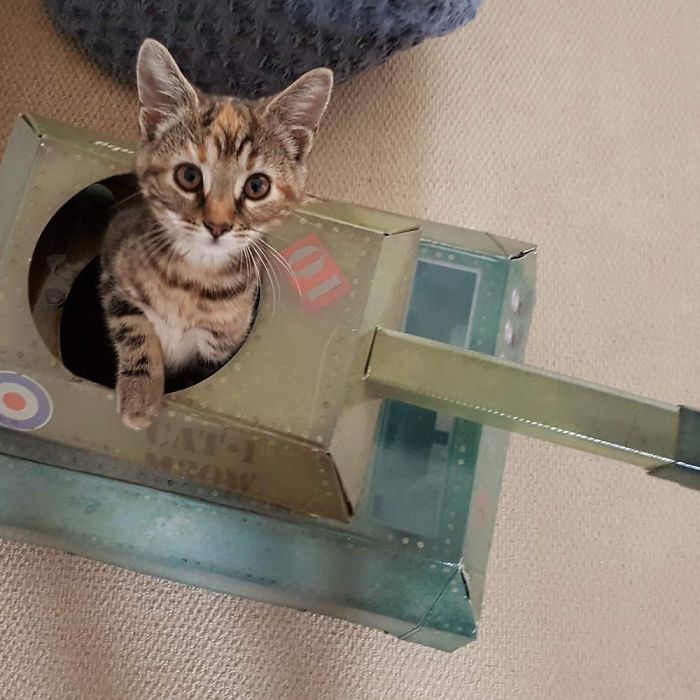 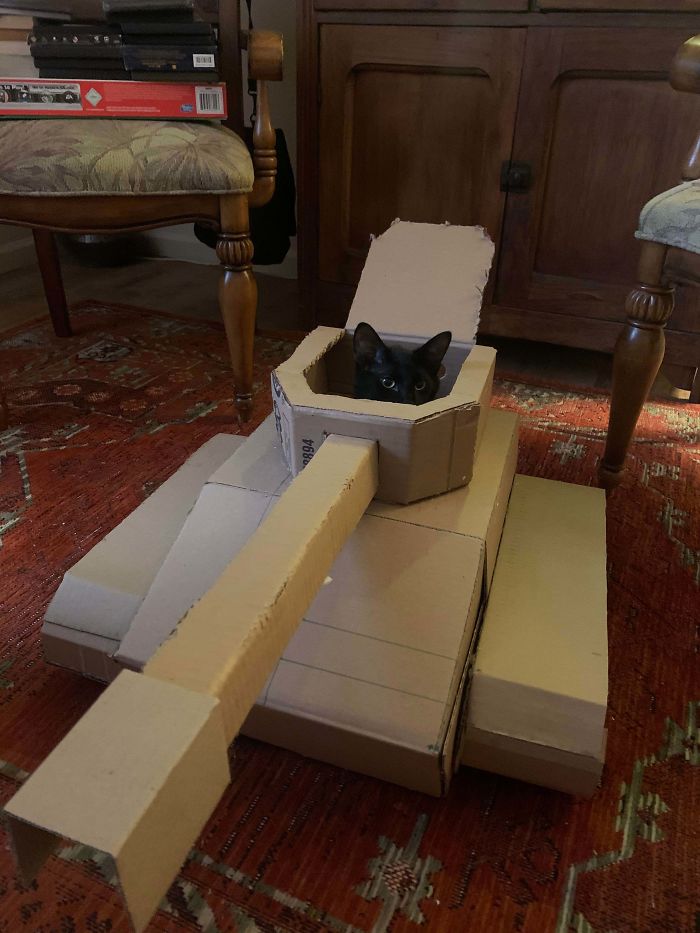 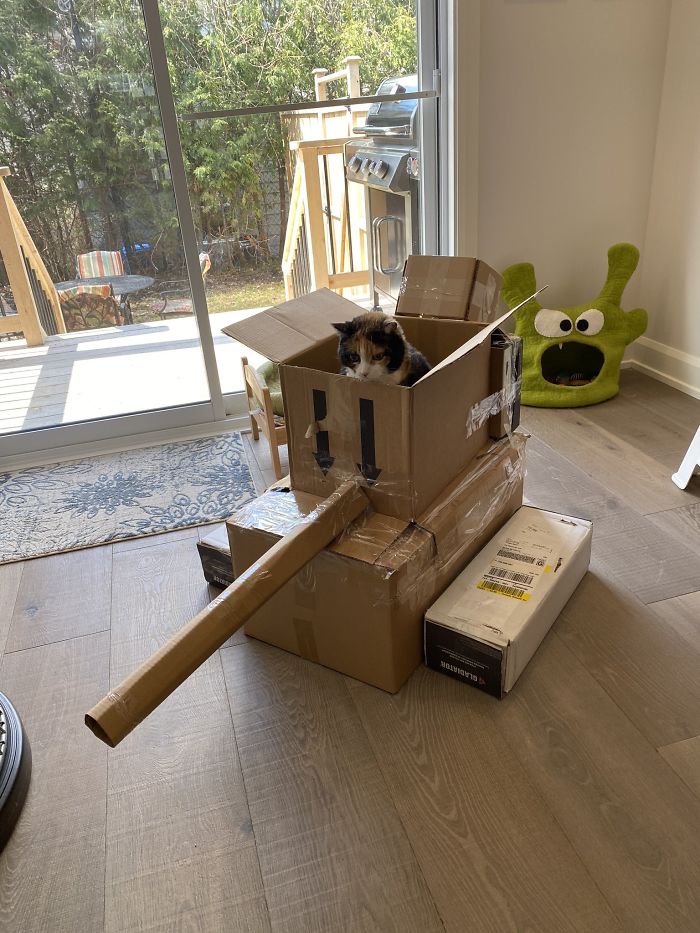 Credits: DoyleLeilani – The cat tank is coming along nicely…however General McTubs jacked me up for not having added a co-axial gun and some grenade launcher type system. 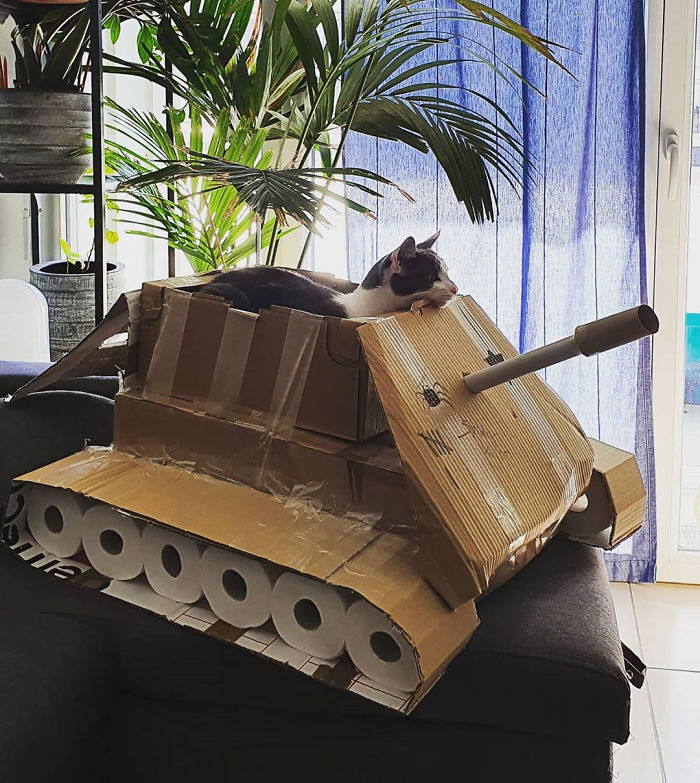 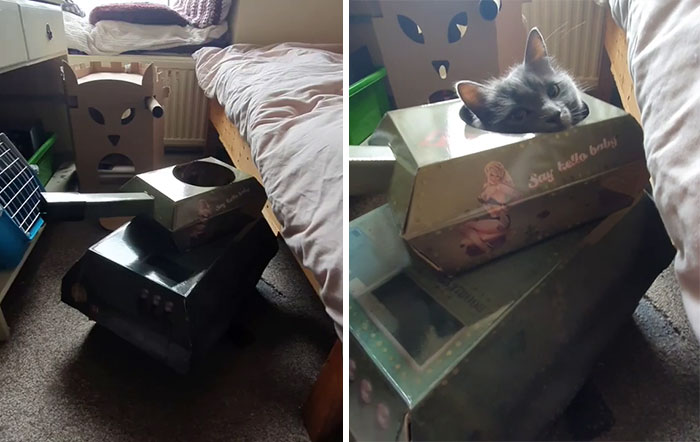 Credits: laomedeiia – Every cat needs a tank to defend their castle. I can’t tell you how frustrating this was to build. 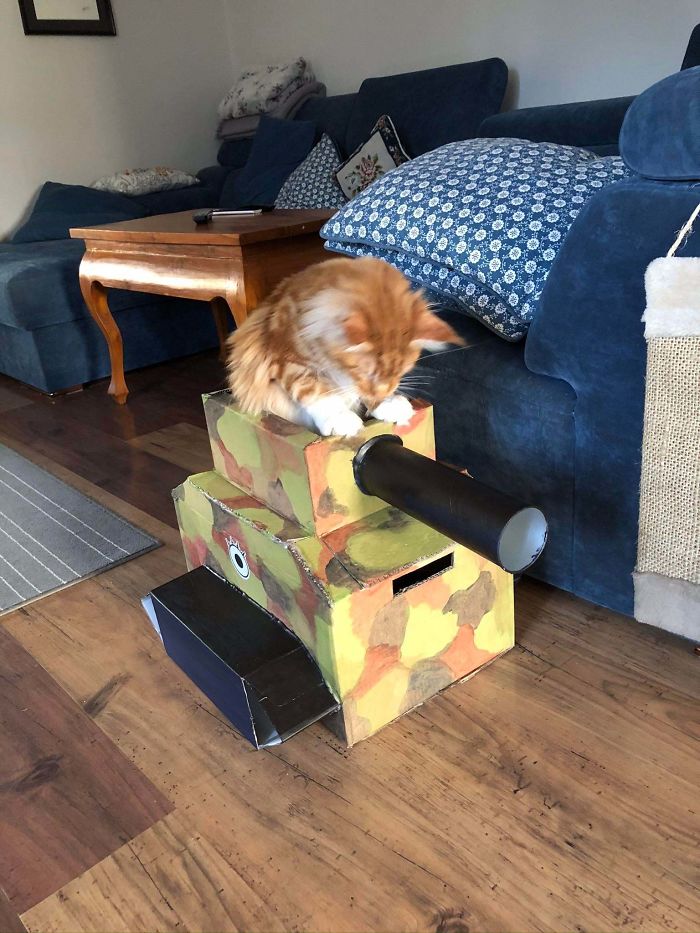 Credits: reddit.com – Quarantine day 11: my mom build a tank for our cats. 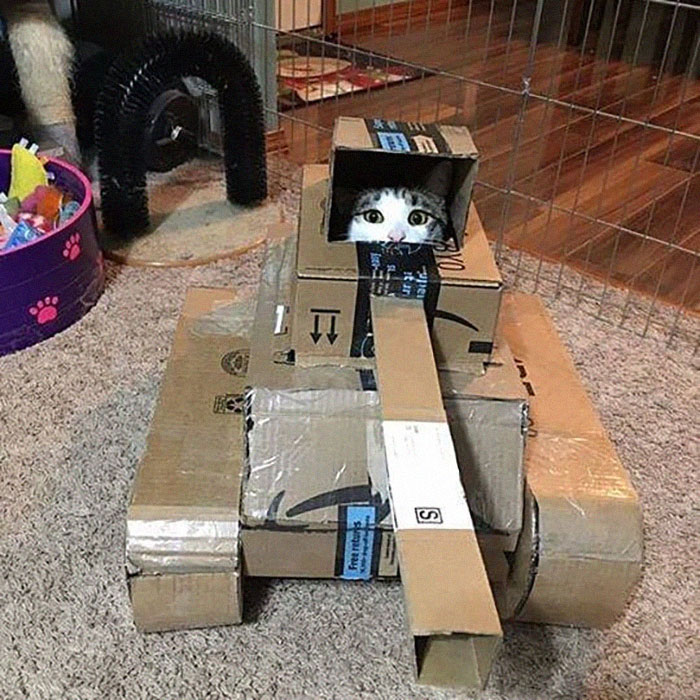 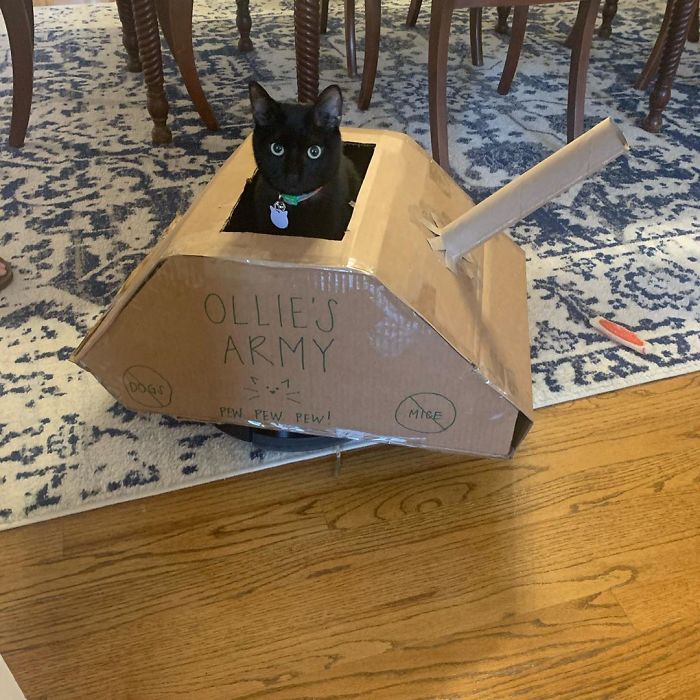 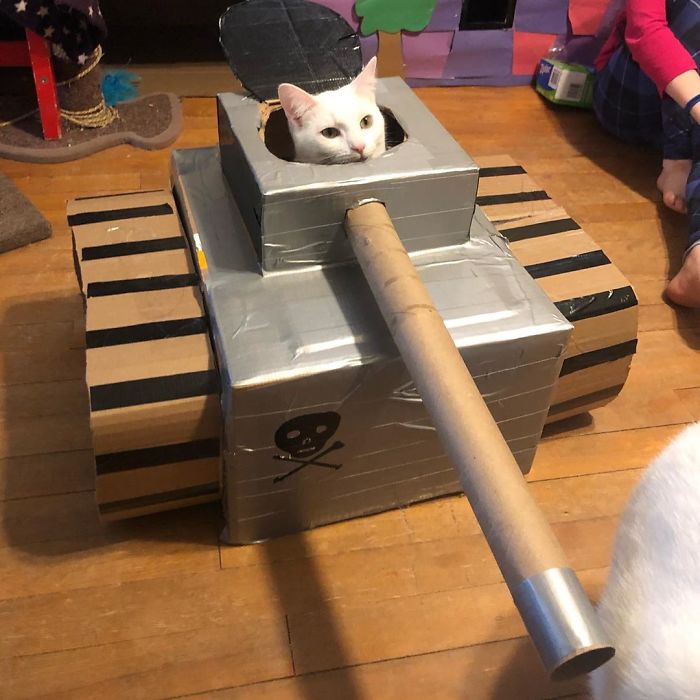 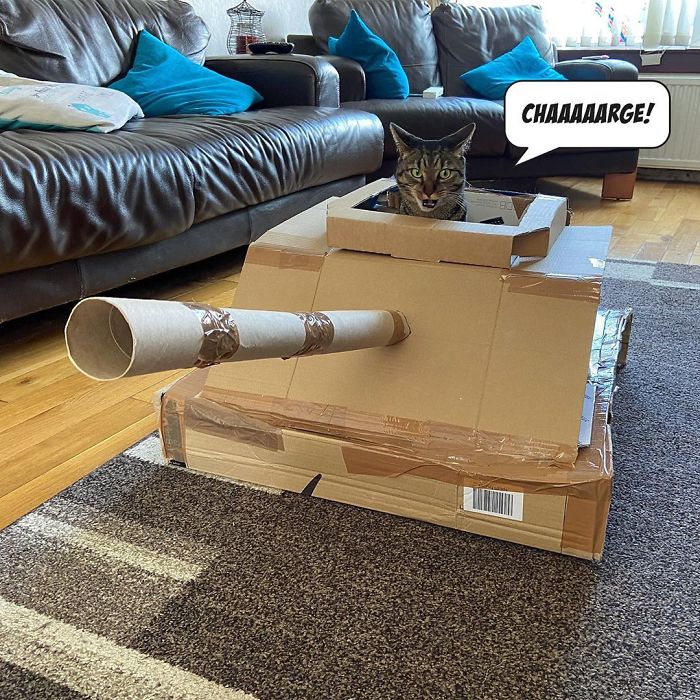 Credits: garrysyas – We made the cat a tank today. I think she likes it.‬ 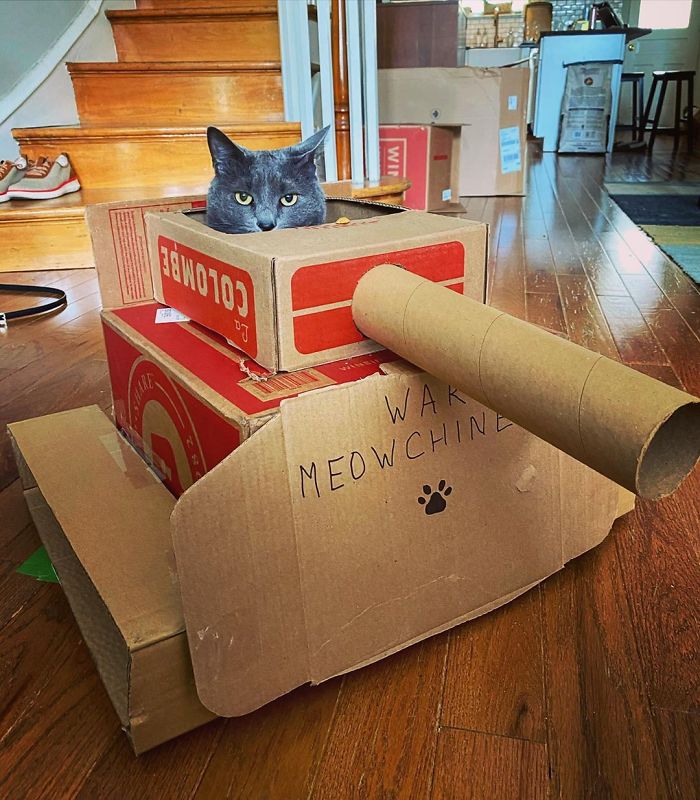 Credits: stepalater – I’ve reached the “built a tank for the cat” stage of quarantine. 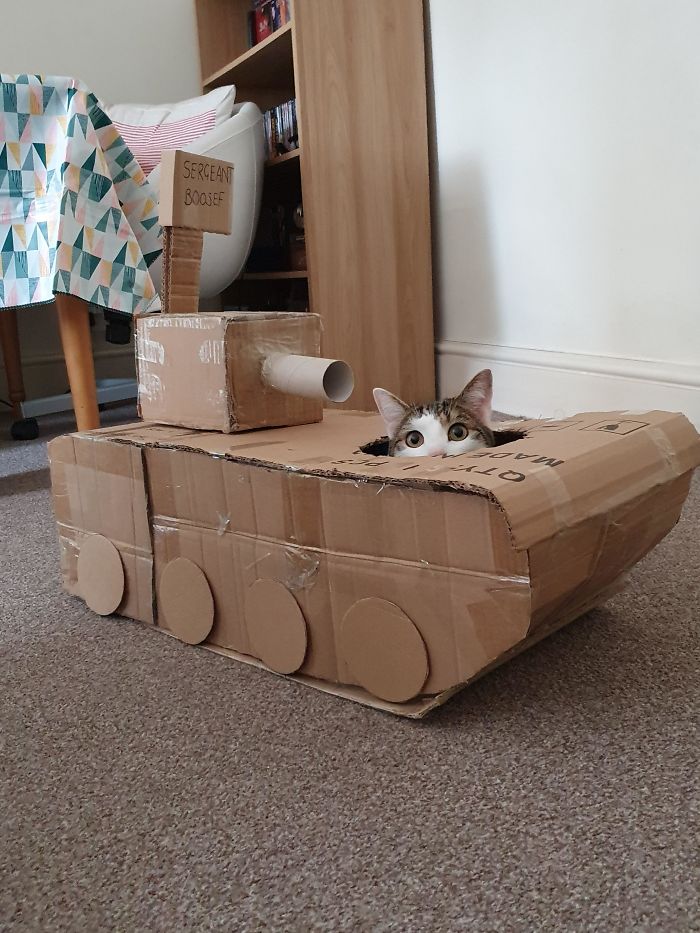 Credits: reddit.com – We built our cat a tank out of leftover cardboard. 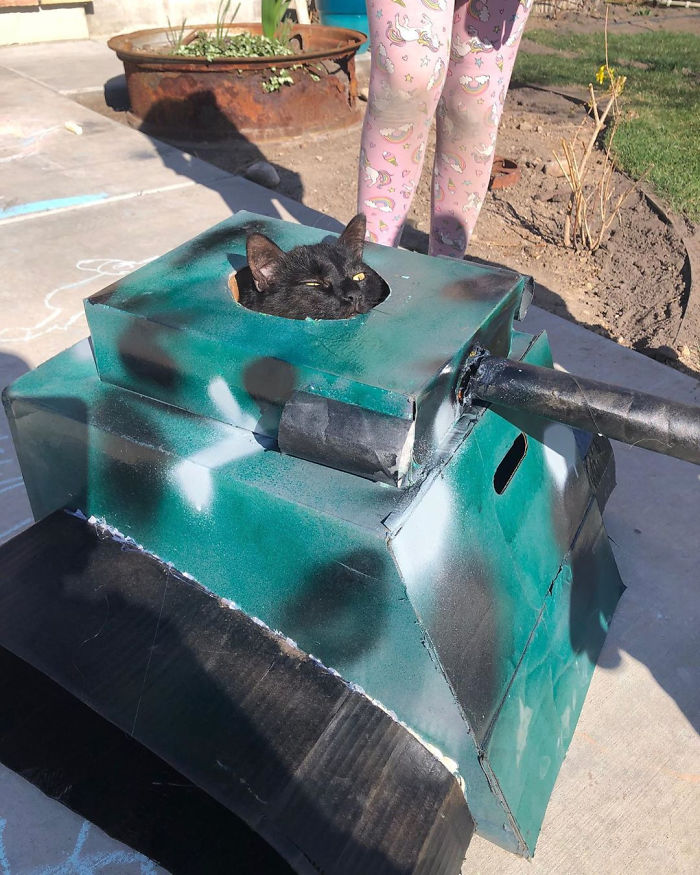 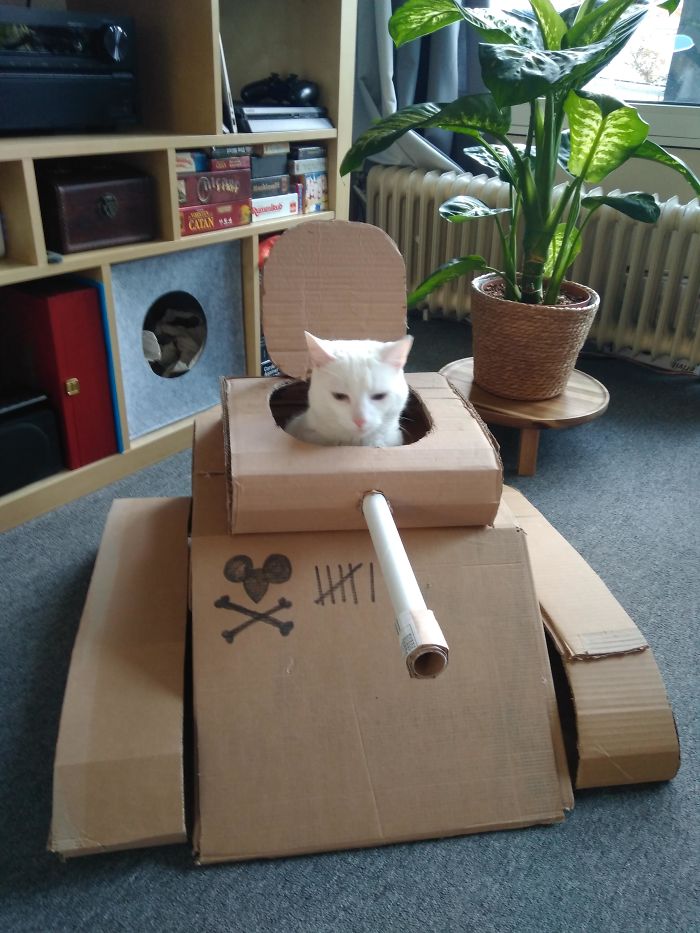 Credits: huh_wat_huh – Took me all afternoon but I regret nothing! 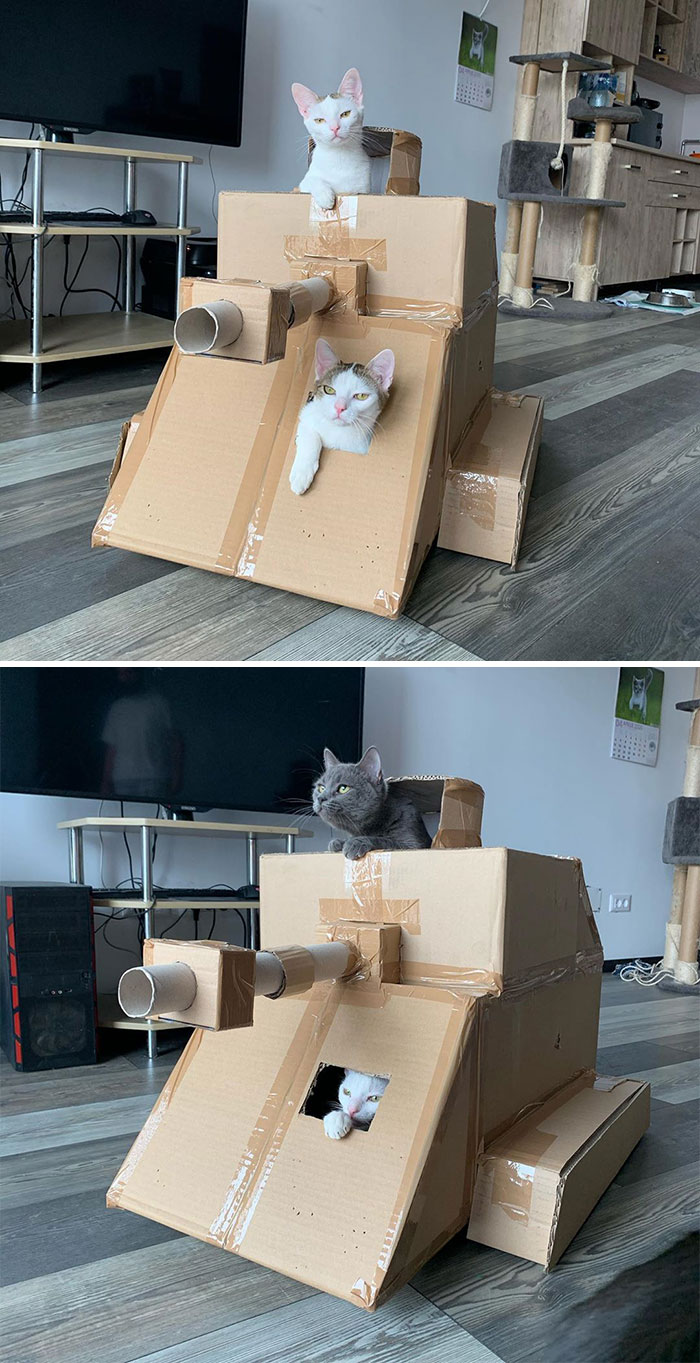 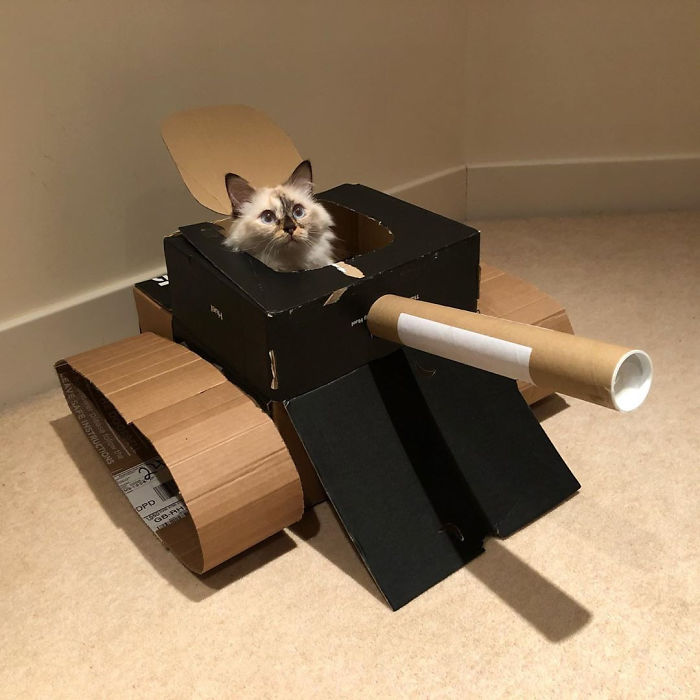 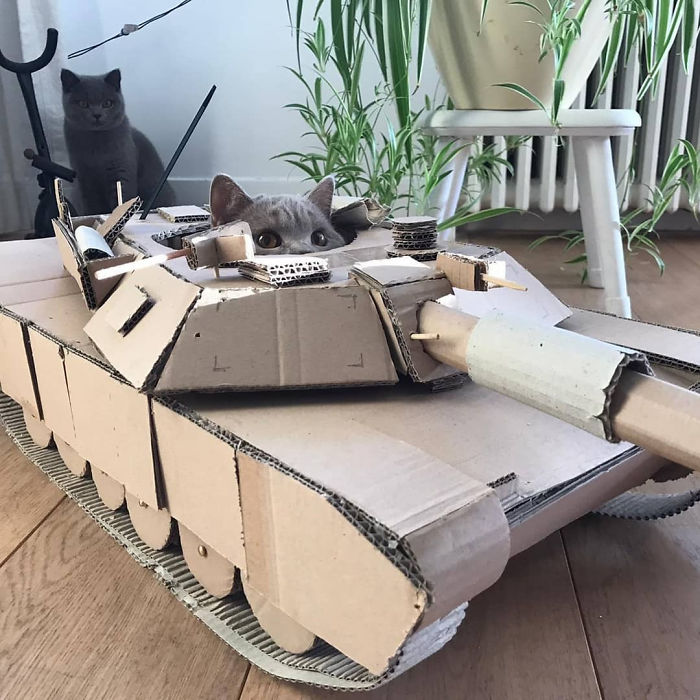