Everyone has a different way of expressing themselves. Some choose art forms like music and dancing, others like to write poems and prose. However, one of the most underrated forms of art is architecture. Designing a great home is no easy task. A home where its residents can feel more comfortable than anywhere else in the world.

Although most architects design homes that fit properly into urban centers all around the world, there are a few who like to stand out. They use their homes to make a statement.

Here’s a look at some of the strangest and bizarre house details from around the world.

1. “Microwave oven” from the beginning of the 20th century, Europe 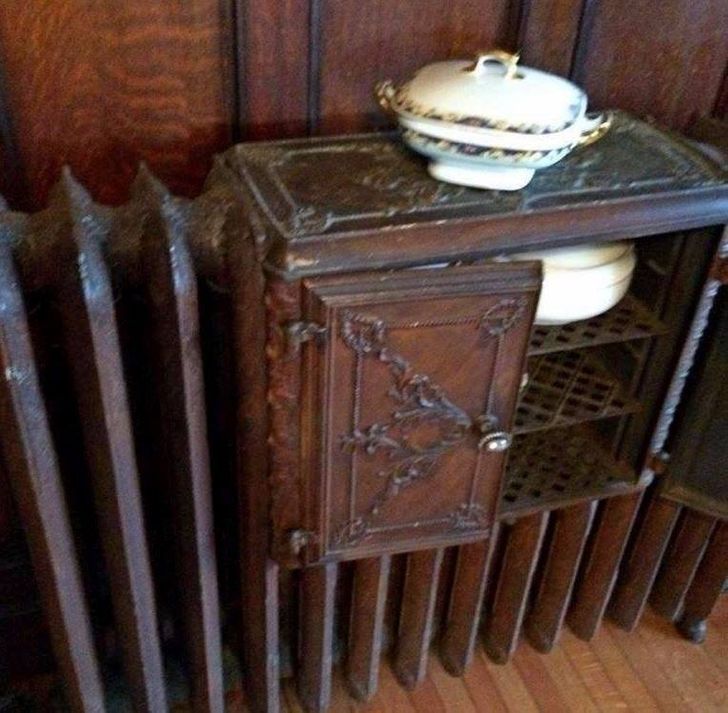 Dual-use radiators were popular in Europe at the beginning of the 20th century. These radiators allowed people to heat food and dry shoes. Today, these ’boxes’ can hardly be found anywhere because they have been phased out by more modern technology. Present-day houses are heated with electricity as the former option to heat with hot water and steam became very energy-consuming. 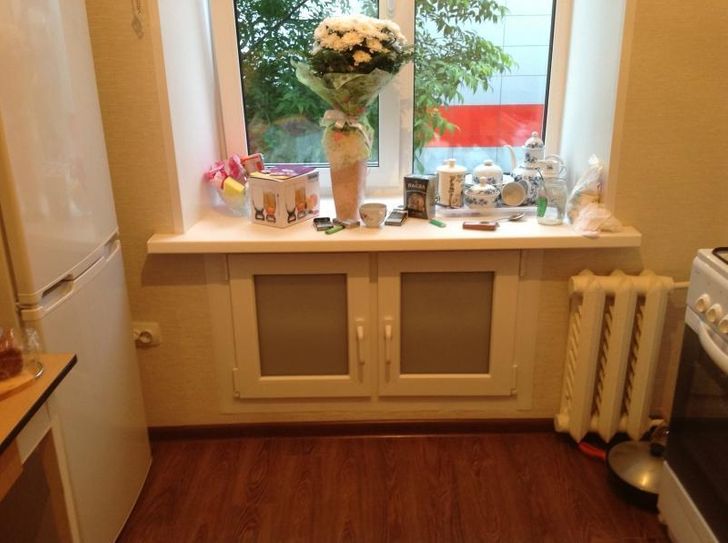 The houses built in the 60s can brag about having a seasonal fridge. The thick walls of the houses allowed the architects to design a special niche where residents could keep perishable and canned products during the winter season 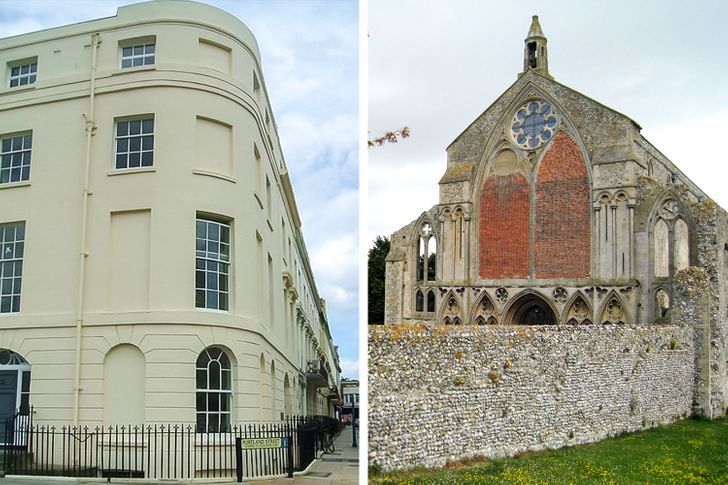 Blocked up windows in the old buildings of Great Britain are a good example of how ridiculous laws have affected a culture. In the 17th century, the British and the Scots paid taxes for the number of windows they had in their houses. At those times, only rich people could afford to have all their windows be glass. It can be compared with having yachts and private jets in modern times. This all happened because it was extremely expensive and difficult to produce glass.

If people didn’t want to pay the tax, they had to block up windows with bricks. Poor people, in turn, didn’t have any windows at all and had to live in complete darkness for generations. 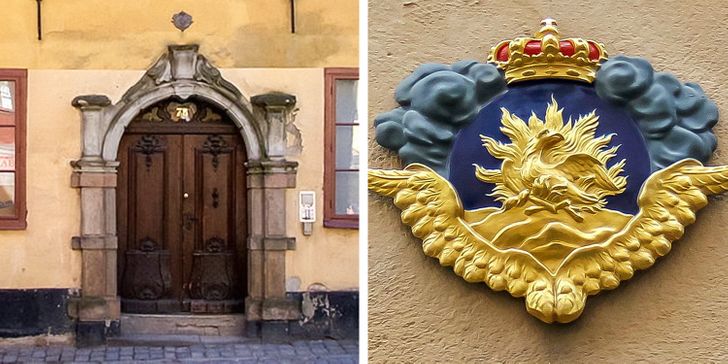 There is a symbol of a Phoenix bird that hangs over the doors of some buildings in the historical center of Stockholm. This medallion used to cost a fortune in the 18th century. It started because houses in the old city were built so close to each other, that whenever there was a fire, it had the potential to destroy the whole block or even district. Firefighters first extinguished the houses with this distinctive medallion on the façade, while the houses of poor people were tended to later.

The medallion with the Phoenix bird was like fire insurance. And here is an interesting fact about the consistency of the Swedish people – the fire insurance company that used to sell these medallions back then is still in business today. 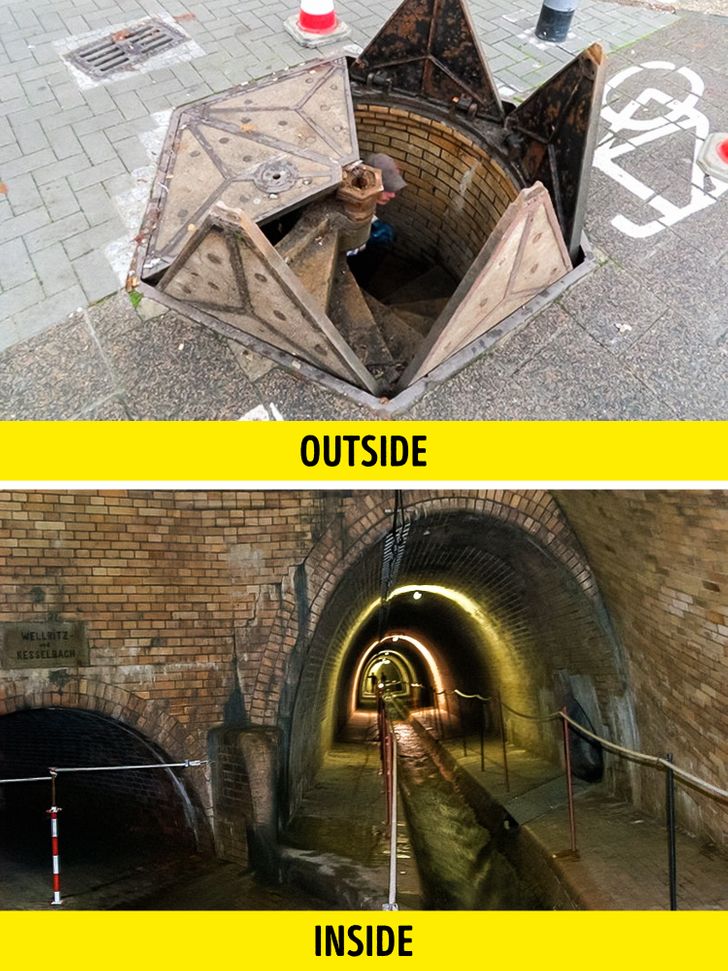 The lid of this manhole in Wiesbaden, Germany resembles the ’Millennium Falcon’ spaceship from Star Wars. In reality, it’s the entrance to the dungeon of the Salzbach canal. Initially, the construction served as a canal, but now it’s used for excursions. 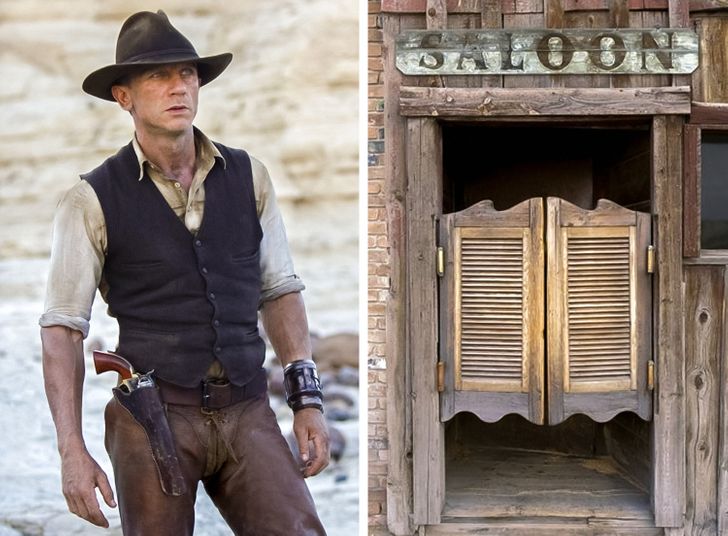 The feature of any respected saloon in the Wild West is a hinged door that can freely open to both sides. At first glance, it might seem to be a completely impractical construction. However, this door device has a few very direct purposes.

The first most obvious one is ventilation. The second one is puritan in nature, it was to protect the gazes of the pious inhabitants of western towns from the indecency inside the saloon. At the same time, frequent saloon-goers could see the light from afar and knew that the bar was open. The third reason has a more commercial meaning, the shape of doors, called “bat wings,” made saloons recognizable even without a sign. 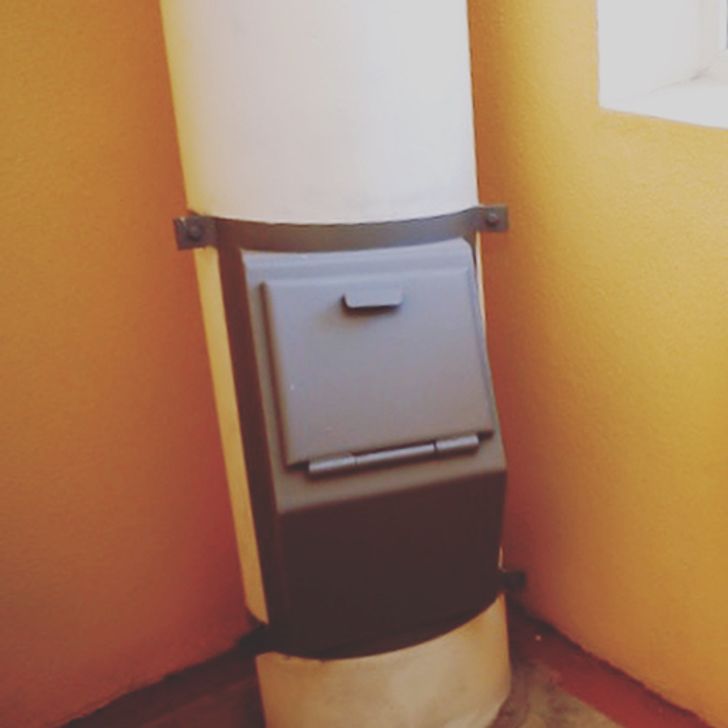 How does one turn a cool idea into a nightmare? It’s very simple — create a garbage chute. The instant waste disposal device was first designed for a house in Vladivostok back in 1938. At first, the chute outlets were located inside of the actual apartments, but later they were moved to be in a central location on each floor of the apartment block for sanitary purposes. However, that didn’t help either. Today, residents of apartment buildings ask management organizations to weld waste chutes closed because of the unsanitary conditions they create.

8. The absence of windowsills, Montenegro and Bulgaria 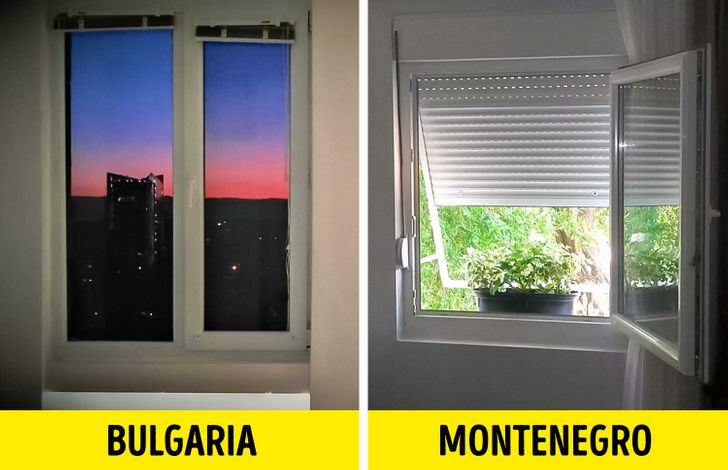 It’s not customary to build window sills inside rooms in Bulgaria and Montenegro. It might seem impractical for people who move to Bulgaria for work, but it’s all because of the walls in Bulgarian and Montenegrin homes. They are thin because of the climate and there’s really no space left for a windowsill. Additionally, the Montenegrin language doesn’t even have a word for “windowsill.”

9. A window between the bathroom and the kitchen, USSR 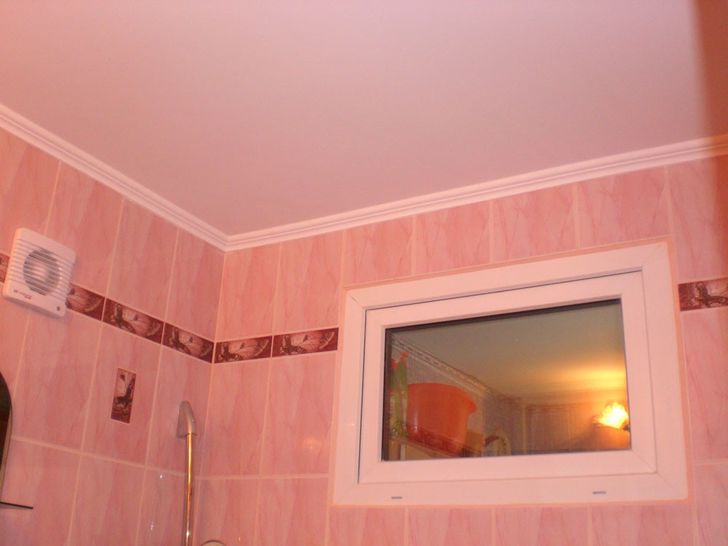 A window between the bathroom and the kitchen is a design feature of a Soviet house. People living in these houses have wondered why these were there for many generations. First of all, this window visually expands the space – a standard bathroom in a panel house is pretty small. The second reason is that this window provides extra light. This architectural solution is not used in new houses anymore. 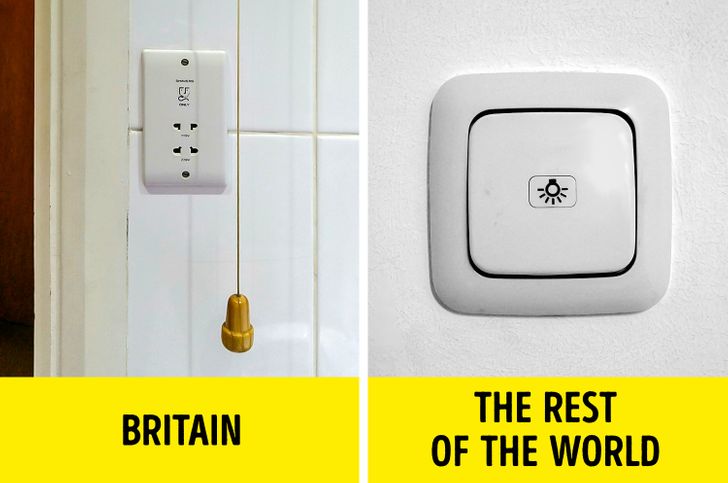 Bathrooms in old British houses still have pull-string light switches. They are there for safety reasons because humidity and electricity are a dangerous mixture. Standard light switches were not used in bathrooms because residents were afraid that they might be in danger of electric shock. This switch could’ve been placed just outside the bathrooms, but British people decided to solve it this way and now a pull-string light switch is an outstanding feature of English houses. 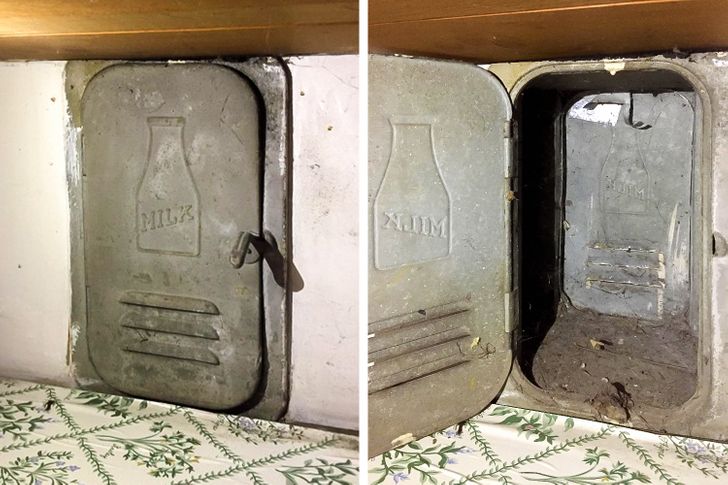 Buying milk is not an issue for us in the modern world — there are numerous types of milk products in stores. However, until the middle of the 20th century, milkmen used to deliver our milk. And the walls of some houses prove it with these tiny milk doors. Milkmen would open this door and leave a bottle with milk right between the walls. 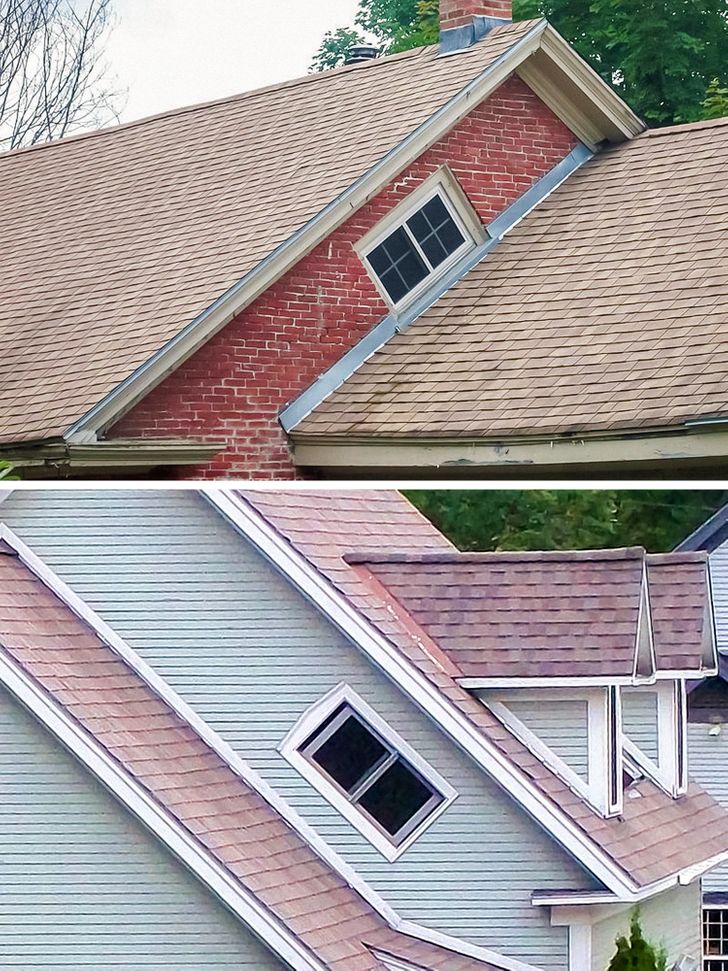 Diagonal windows are a feature of the old houses of Vermont. But why are they called “witch” windows? An old legend says that due to unknown reasons, witches can’t enter diagonal windows on their flying brooms.

However, there’s a more realistic explanation too — it’s difficult to figure out where to install a normal window in an attic. So, they had to find a way out by turning the windows by 45º. Windows in an attic provide better lighting and much needed ventilation. 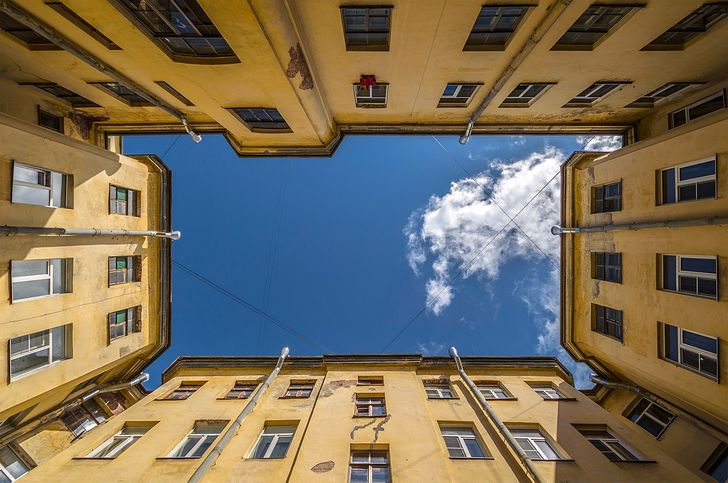 Courtyards (or well-yards) are a symbol of the Northern capital of Russia. But whose idea was it to start building houses this way? According to one of the legends, Peter the Great ordered the construction of buildings in the Dutch style so the old buildings looked beautiful from all sides.

According to another version, it’s all because of the groundwater. It was pretty expensive to prepare the soil for construction and, therefore, each foot of the land was to be used for building. Another reason had to do with the price of the property — many people from all over the country used to come to the Northern capital and each person needed a place to live. That’s perhaps how these multi-story courtyards appeared.

You can find the addresses and photos of all the well-yards in Saint Petersburg here. 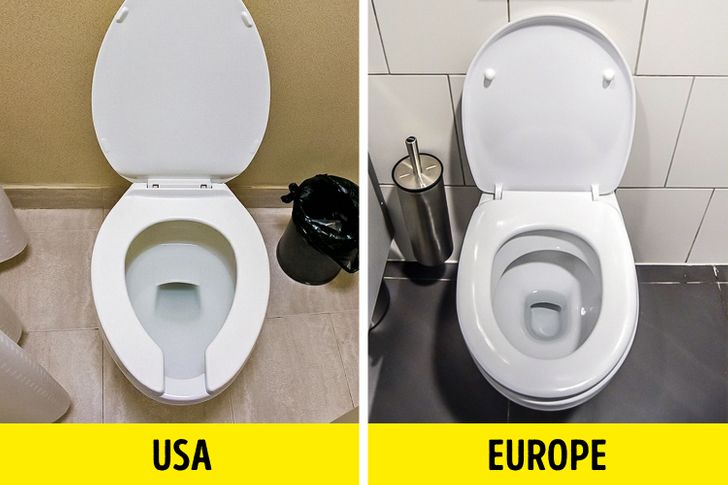 The drainage system in American toilets might scare a European person. The fact that the toilet is filled with water gives the impression that the drain is clogged. However, this is not true. The high level of water protects the bowl’s walls from getting dirty. It enables Americans to not have to use brushes as often. Also, some urinals in the USA don’t have an actual bowl.

According To NASA, The World Is Greener Than It Was 20 Years Ago, And You'll Be Surprised To Find Out Why Previous post
West Michigan Hosts A Giant Lavender Labyrinth And It's Perfect To Wash Away All Your Worries Next post