15+ Pics Showing How Canadians Are Dealing With An Unprecedented Blizzard

We’ve all noticed the weather conditions drastically changing and also the campaigns fighting climate change. From raging bushfires in Amazon rainforests and Australia to blizzard snow recently in Canada, it is obvious we need to take immediate action. A massive blizzard hit Newfoundland and Labrador in Canada, covering the area in huge amounts of snow and blocking everything.

To document this massive snowfall, Canadians took some jaw-dropping pictures and posted them online. From front doors completely blocked from the snow to houses buried beneath it, this blizzard is huge. The views from the city of St. John’s and other Canadian cities now look like from some distant icy planet. 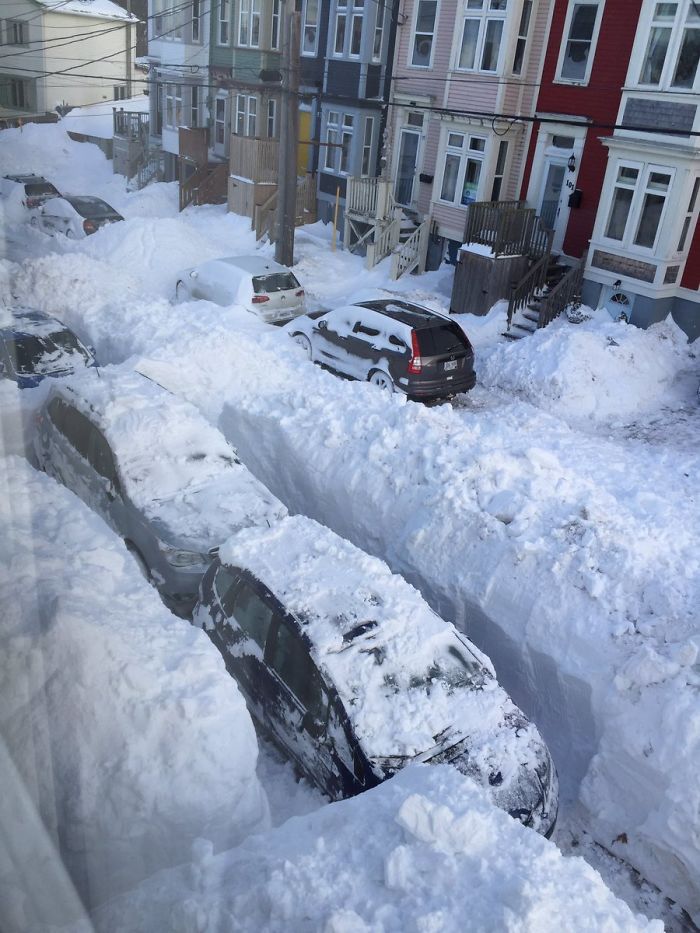 2. From The Air, You Can See The Trenches To Reach Buried Cars 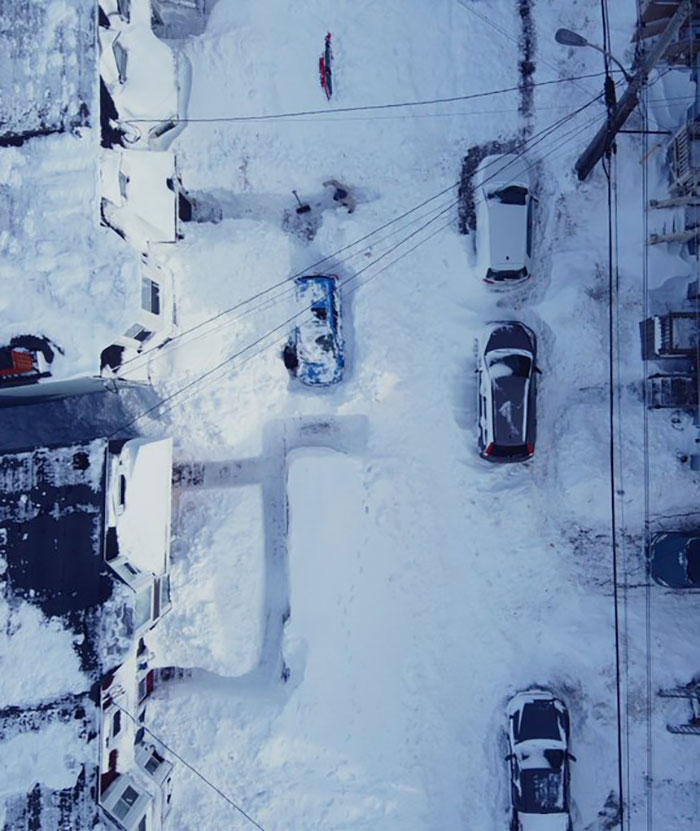 The snowstorm hit Newfoundland on Friday and many Canadians found themselves trapped in their homes, as the snow blocked entirely the entrances to their homes. What’s more, meteorologists are expecting even more snow in the near future.

Thankfully, the authorities of St. John’s were prepared for such a challenge. The mayor of the city, Danny Breen, declared a state of emergency on Friday, demanding that all businesses are closed and all transport vehicles refrain from driving on the roads. With the exception of emergency vehicles, of course.

Beth Saunders, a local from St. John’s, about the situation there said, “We knew for about a week that a weather system was coming but we didn’t quite understand how intense it would be. As the days got closer the snowfall and wind speed estimates kept increasing. As of Tuesday, they were calling for 40 to 60cm, but as of Thursday evening these amounts were increased to 90+ cm of snow and 150+ km/hr winds.”

3. Somewhere Under All, This Is A Row Of Cars And Front Doors. This Is Going To Take A While 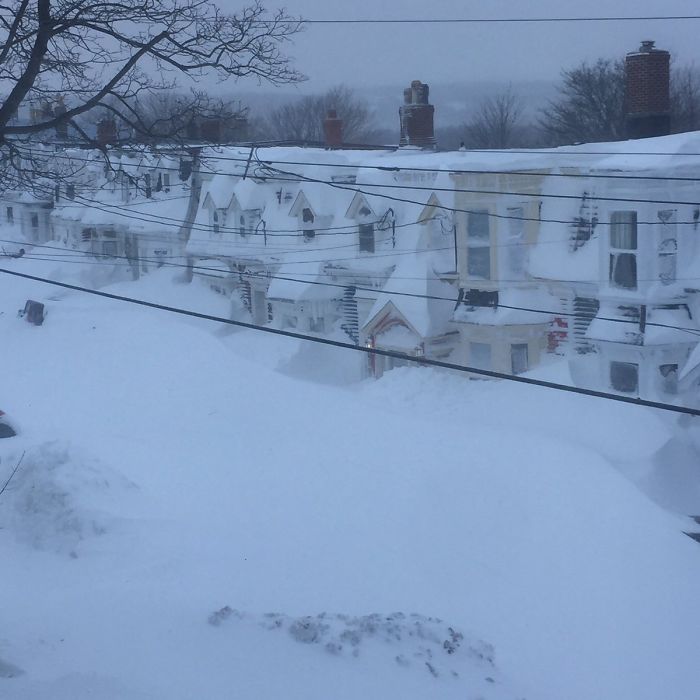 4. Plow Got Half Way Up The Street And Then Gave Up In Despair. Oh Dear 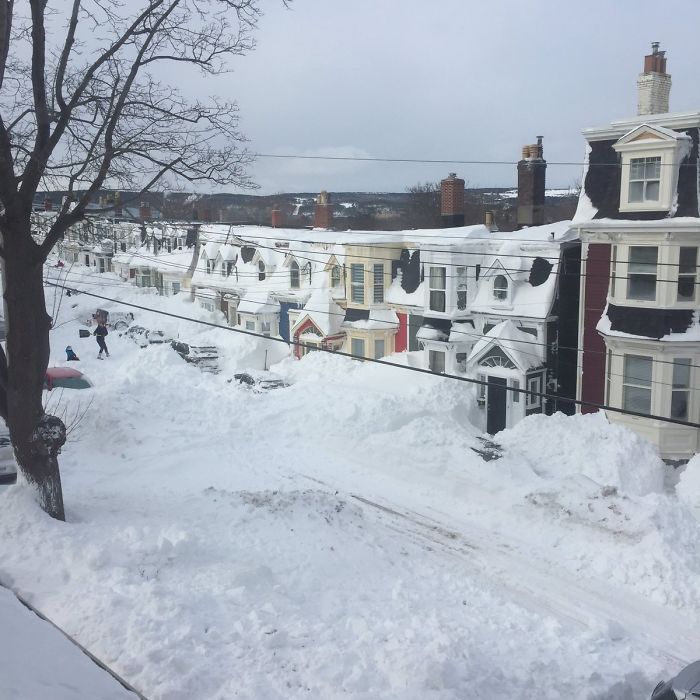 5. Looking For The End Of This Crazy Ass Winter 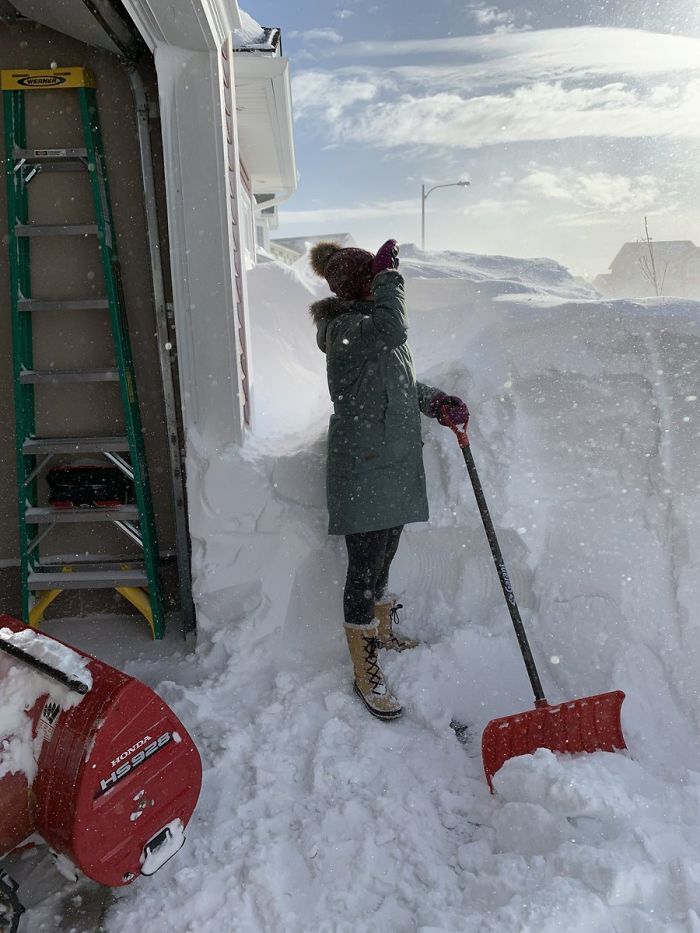 The meteorologists were very on top of this storm and kept everyone informed. The stores were full on Thursday with everyone trying to stock up on food and supplies before the blizzard weather hit. The city even called a State of Emergency for Friday on Thursday before anything happened because they knew how bad it would be. “We’ve experienced bad storms before with much lower snowfall amounts,” she said.

Beth said that it’s stopped snowing currently, but the city is still paralyzed from all the snow. “It’s now Monday morning and we’re on day 4 of the State of Emergency. This means businesses must remain closed and vehicles have to stay off the road or there’s a risk of several thousand dollars in fines. The snow has stopped but we need time to figure out where to put it all. A lot of cars are completely covered with snow which is taking hours upon hours to shovel out. ”

“Since we’re in a state of emergency, businesses are forced to close today. All local schools have been canceled and no one is allowed to return to work (unless you’re an essential service like a plow operator or medical professional that has to be at the hospital). Some businesses have staff working remotely from home when possible, but otherwise, things are not operating.”

6. Six Hour Picture Collage Of The Driveway. My Civic Is Slowly Disappearing Under The Drift That Keeps On Growing 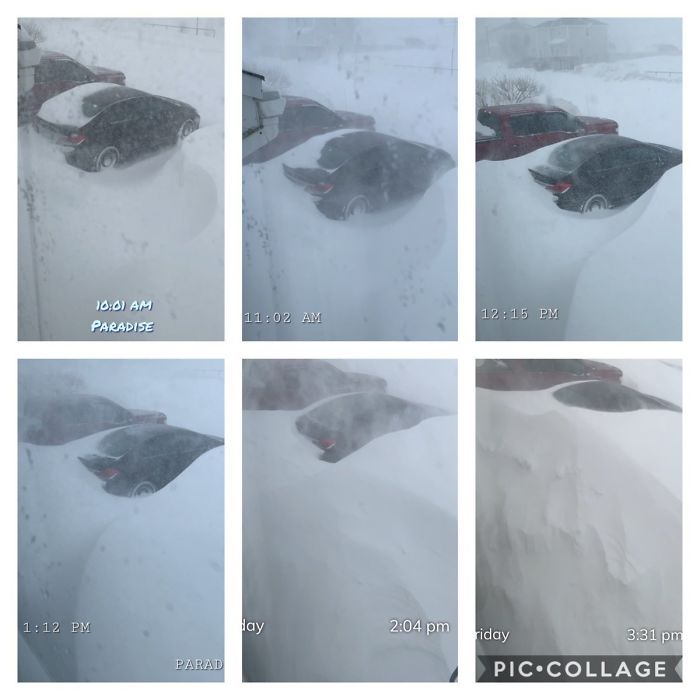 7. Dig Out The Door I Guess 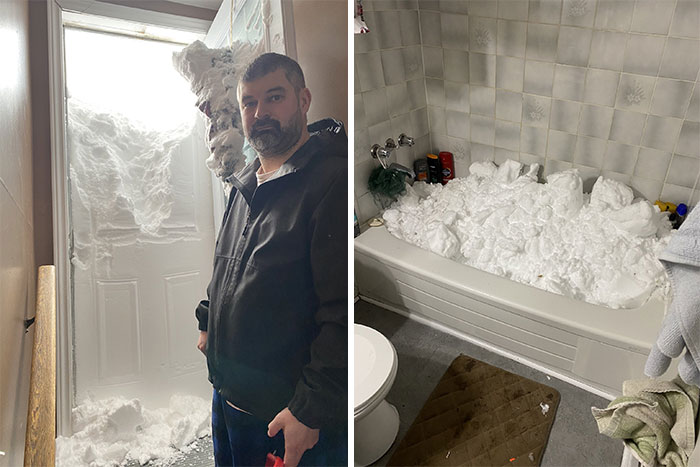 According to Beth, the locals are trying to make the best out of this bad situation. “People have been trying to make the best of this situation as much as possible! As you may have seen online, some people are snowboarding and snowshoeing down major downtown streets, having bonfires in their yards with neighbors, making igloos with makeshift refrigerators for their beer and so on!”

8. Well, I Found A Place To Keep My Dietcoke Cold! All Is Good! 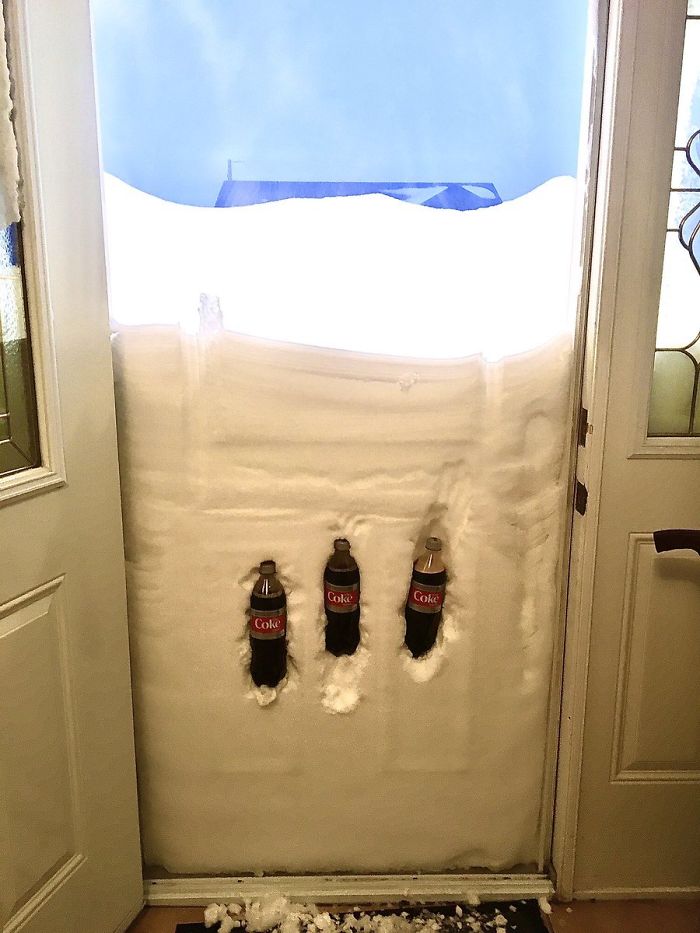 9. You Know The Snow Is Deep When You Can Have A Tunnel Going To Your Front Door 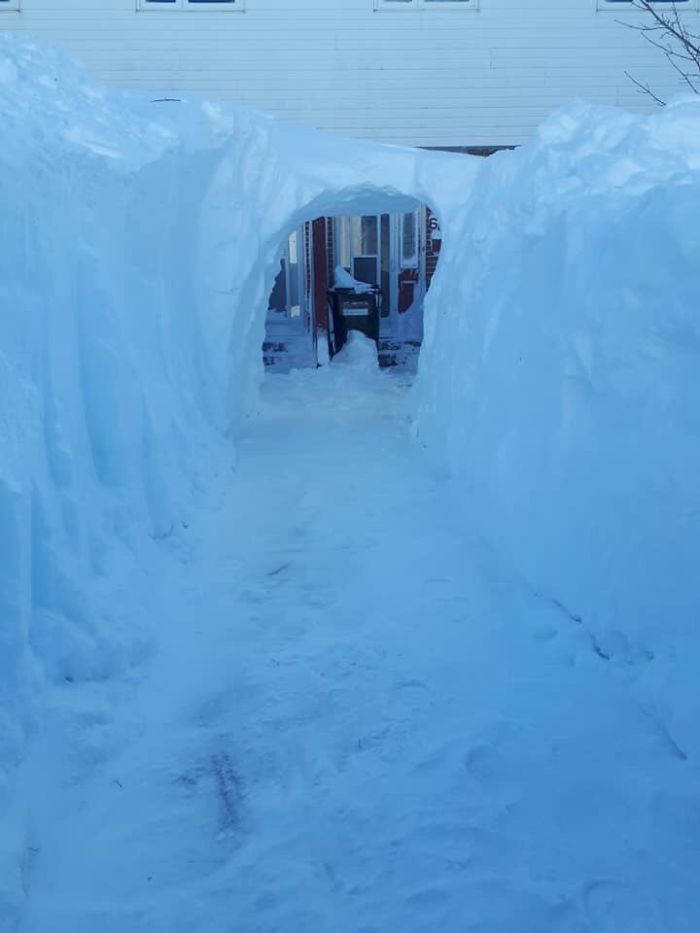 According to Global News, 93 cm of snow fell in Mount Pearl, while Paradise got 91 cm. Meanwhile, 78 cm of snow fell in St. John’s International Airport—the highest in that area since 1942! So, no planes will be taking off or landing there for some time.

Despite the extreme weather, the residents of Newfoundland have joined their forces to tackle this crisis: neighbors are helping each other out, whether it’s digging through all the snow or helping others locate what they need, from gasoline to medicine.

On Sunday, the Armed Forces were deployed to help the residents out as well. Corporal Tiffany Mackey said that she feels glad to be helping the residents of Newfoundland and Labrador. Her stepmother spent 50 hours at one of St. John’s hospitals during the snowstorm and said this: “We’re using our resources to help the people of Newfoundland and Labrador with this snow mess. The fact I can help out and give back is a really good feeling.”

10. This Has Never Happened In The 10 Years We Have Lived Here 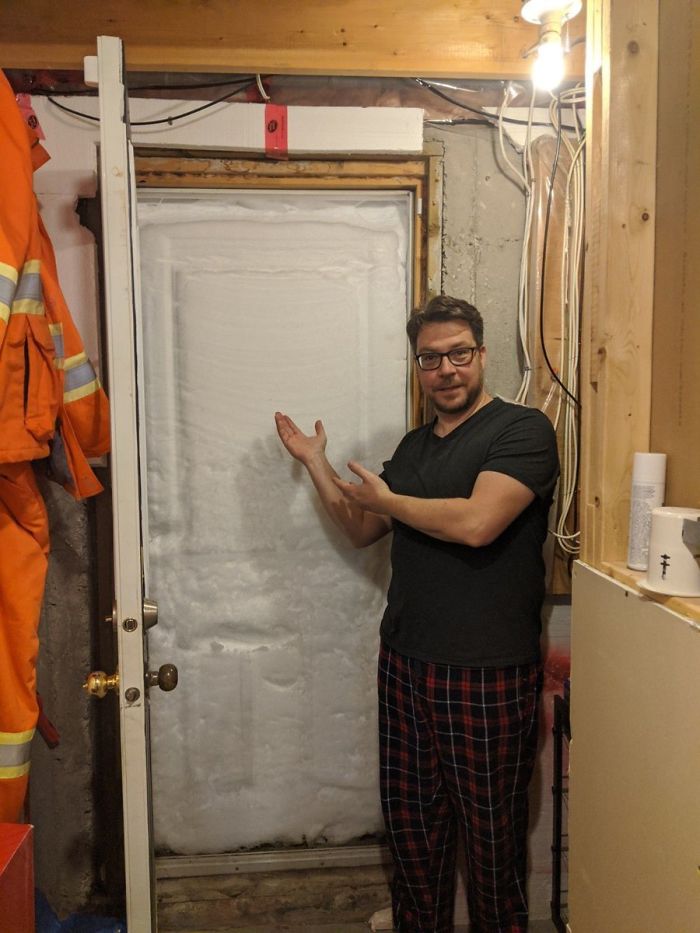 11. Folks Don’t Forget To Check Under Your Hood! 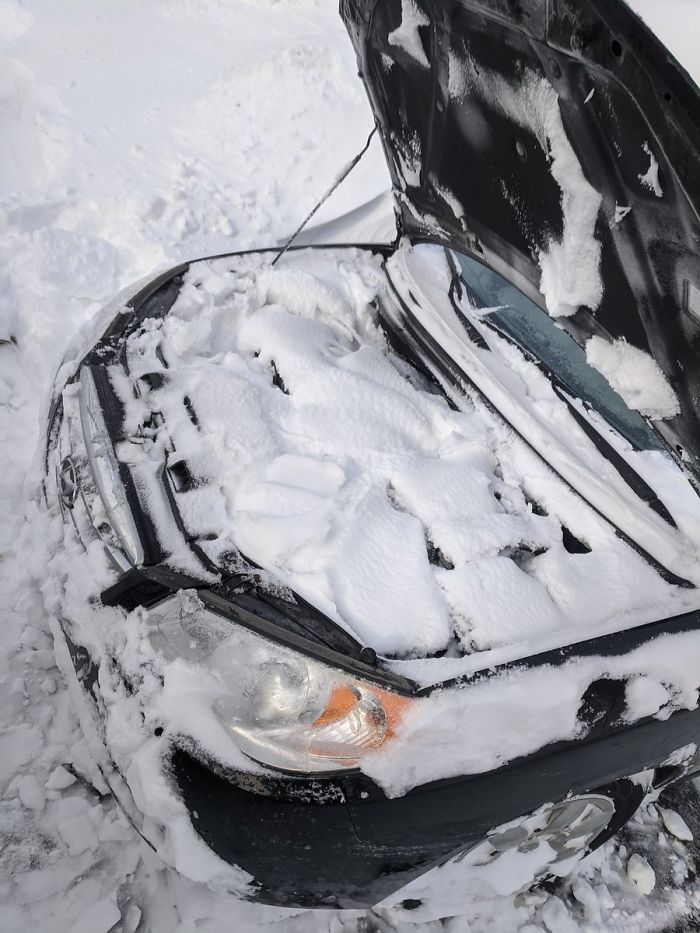 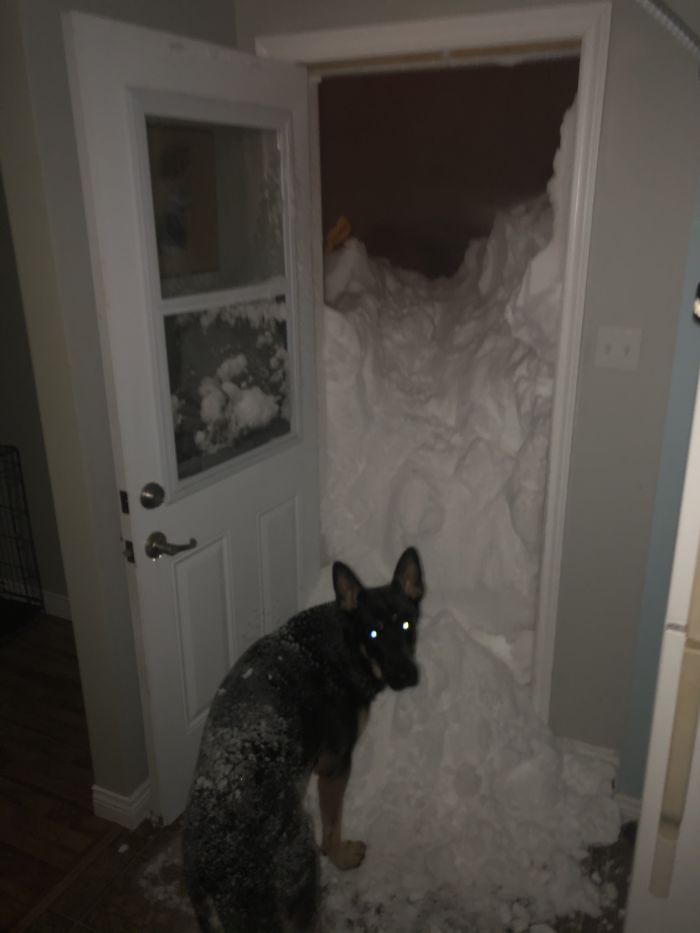 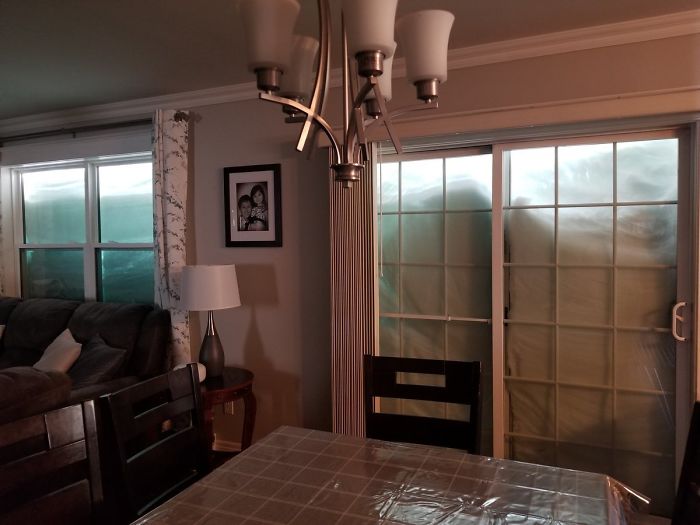 14. Welcome To Canada. This Is This Morning 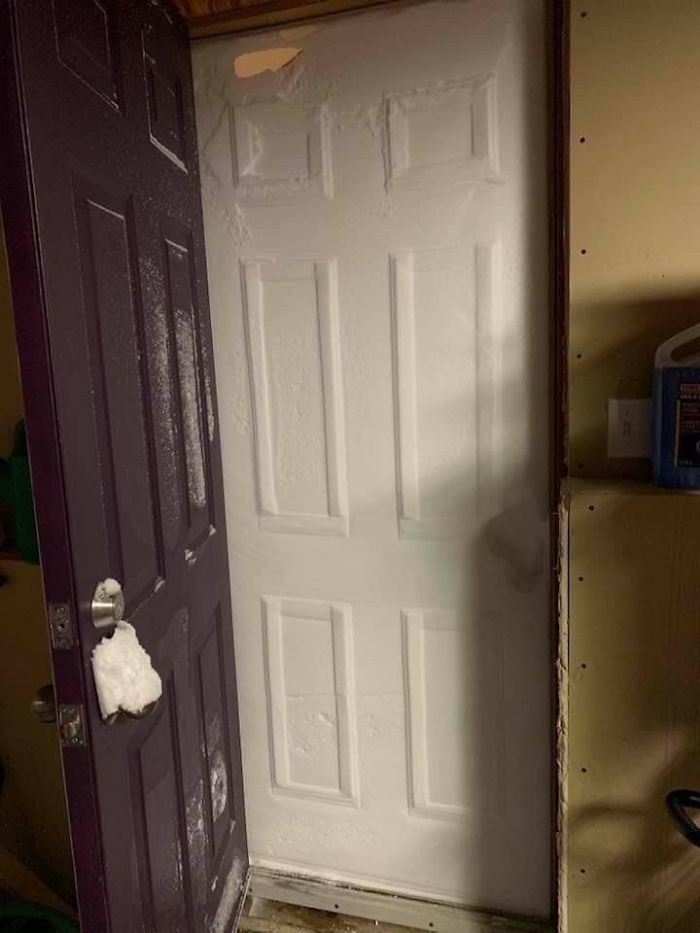 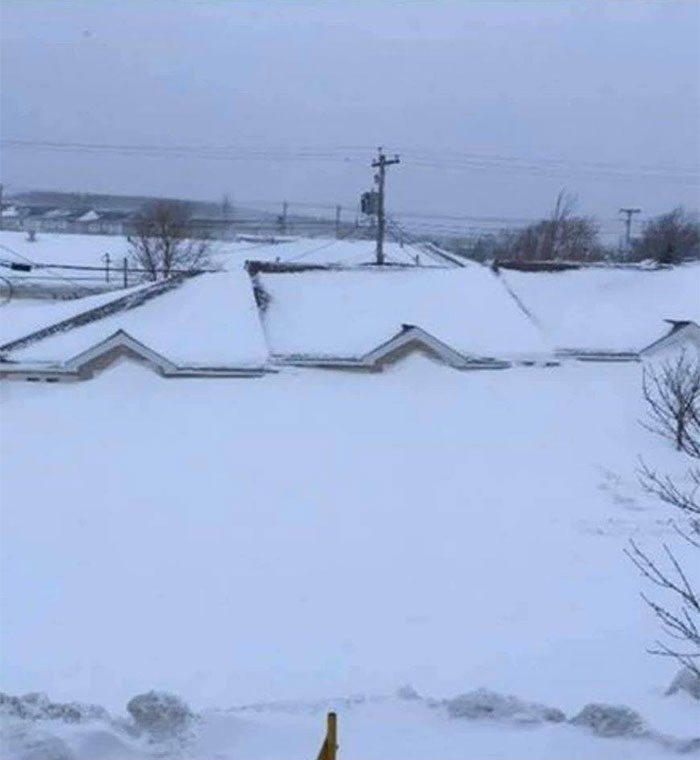 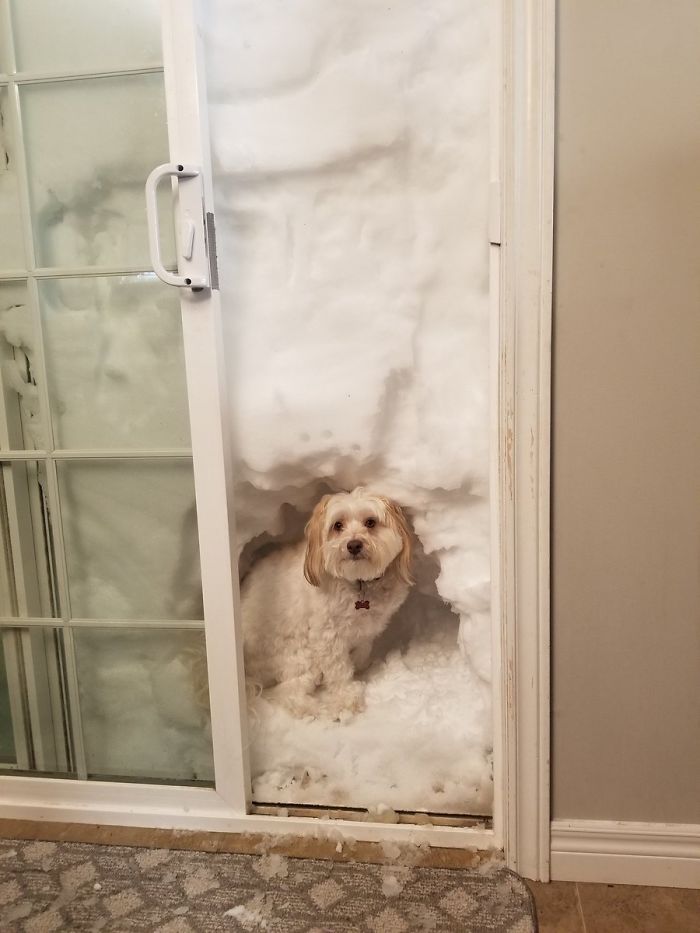 17. Got Their Car Out. Now Just To Run The Wipers And Get That Bit Of Snow Off The Windshield 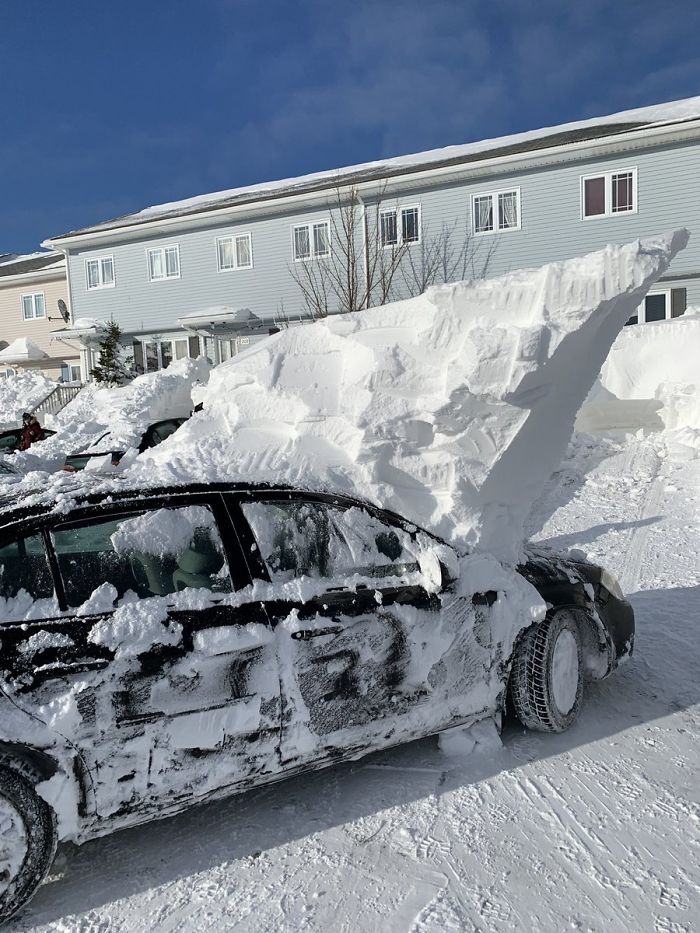 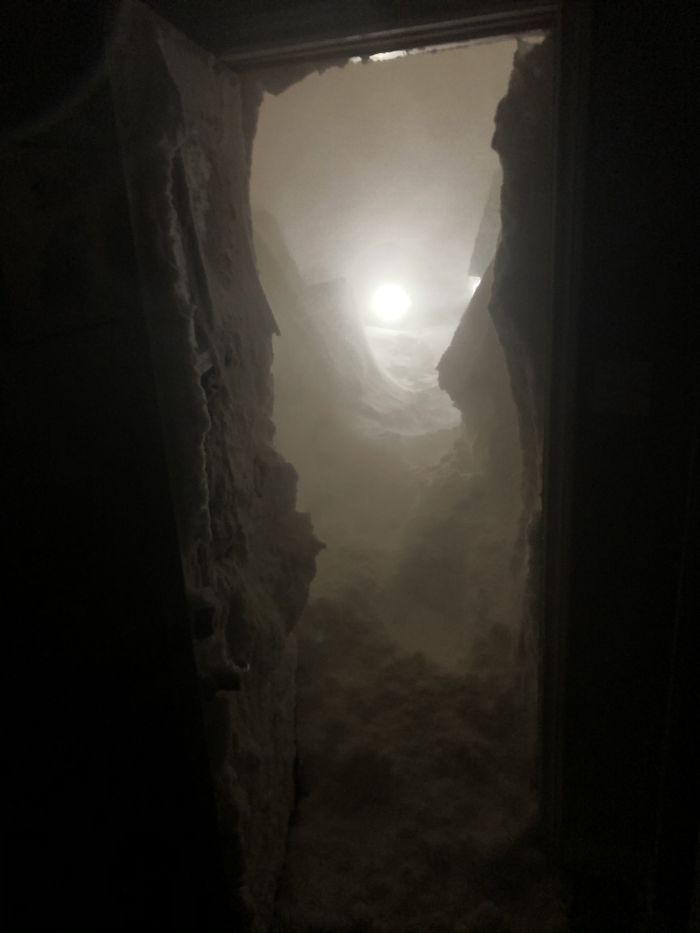 19. Surviving Nlblizzard With A Sense Of Humour! 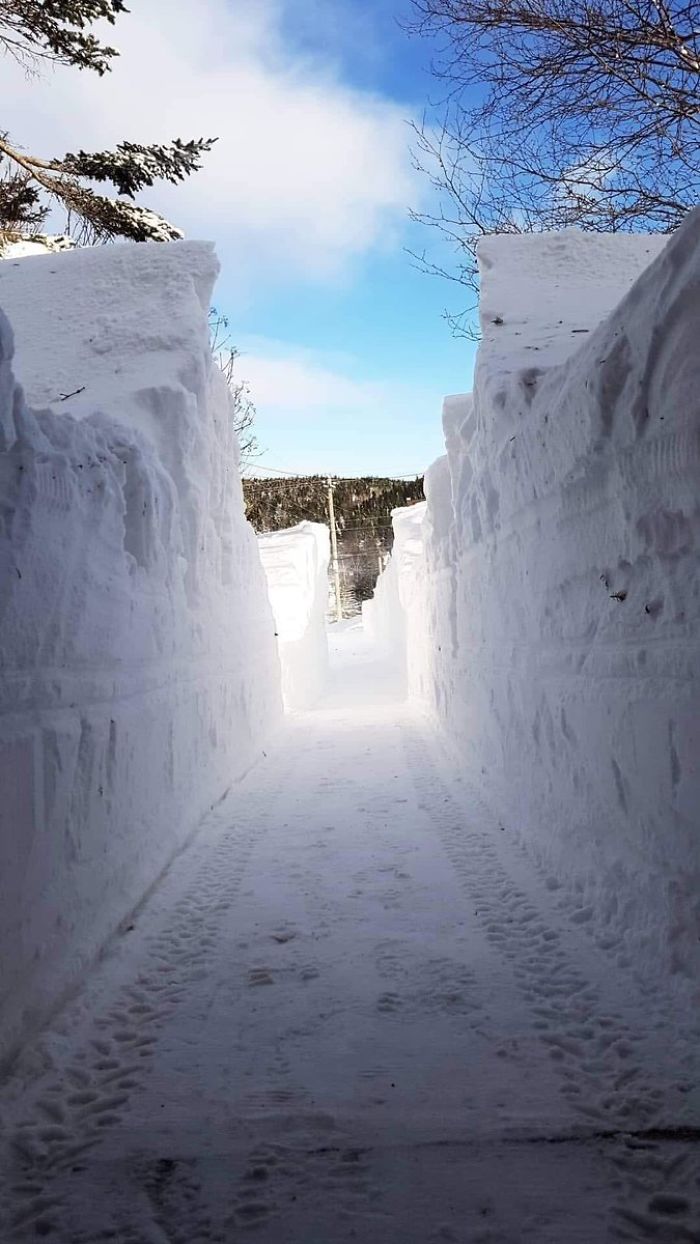 20. What A Cool Driveway In Newfoundland 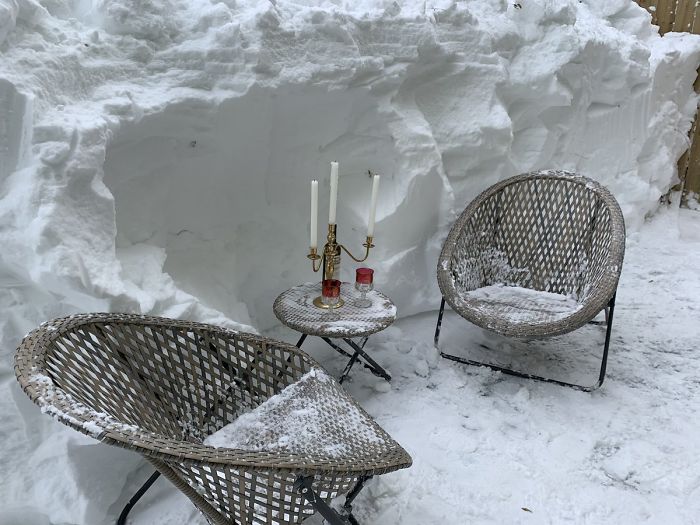 21. Ice Build Up On House In Cape Bonavista 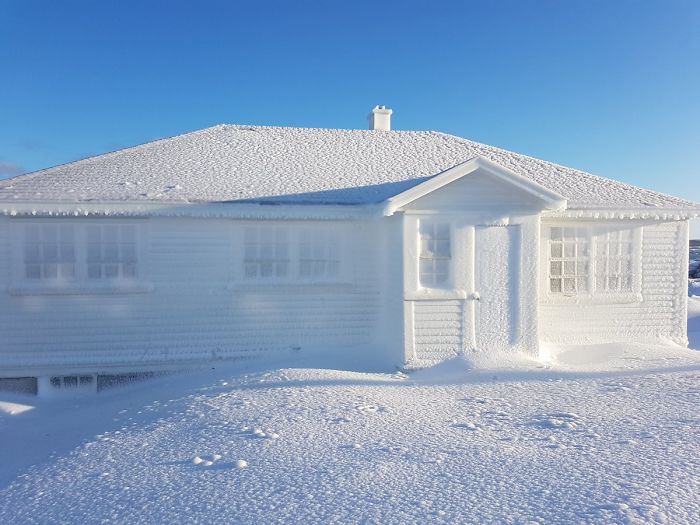 22. Newfoundlanders Have The Best Sense Of Humour! 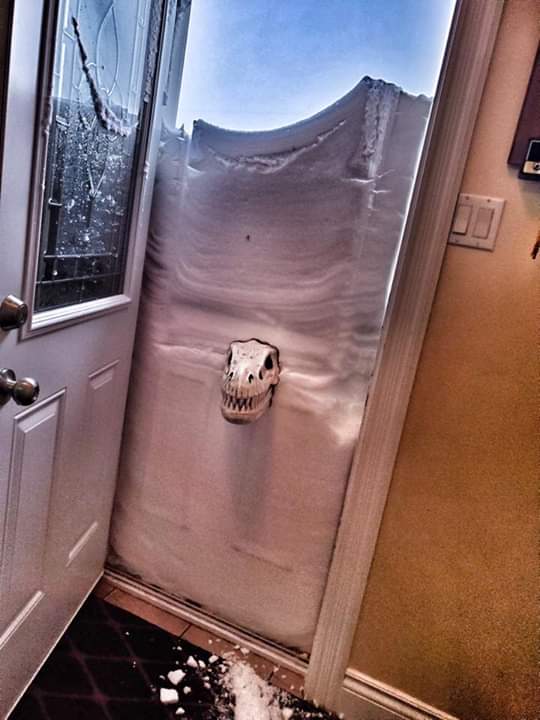 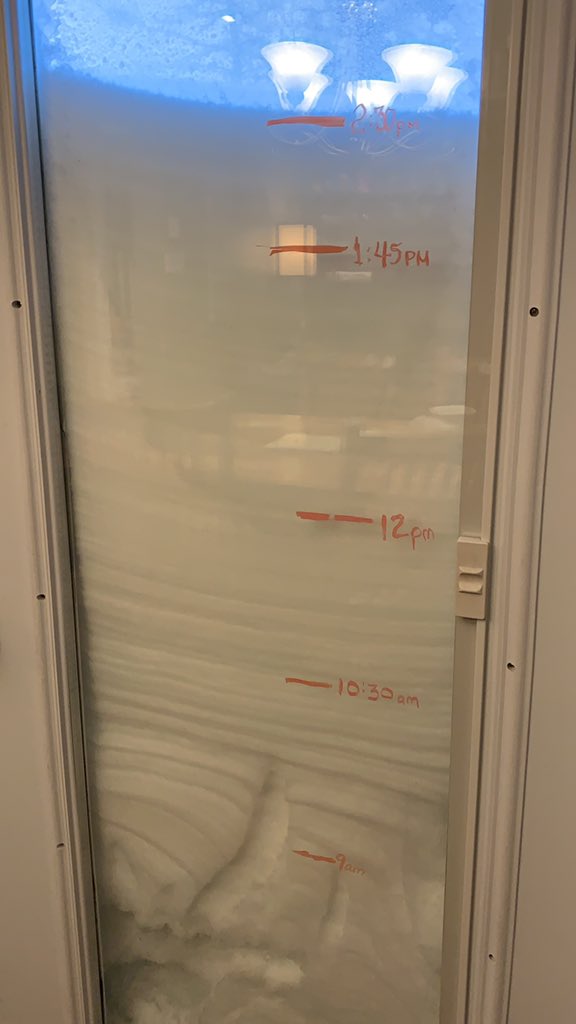 24. Not Laughing Anymore. The Snow Is Piled Up So Hard Against My Door, The Doorbell Actually Just Rang. Okay, I’m Laughing A Little At That 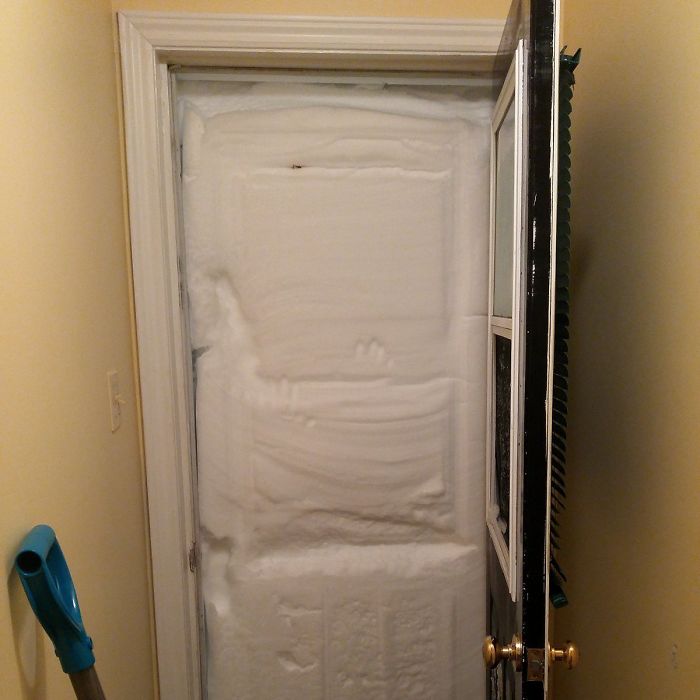 25.How To Make A Snowman From At Home 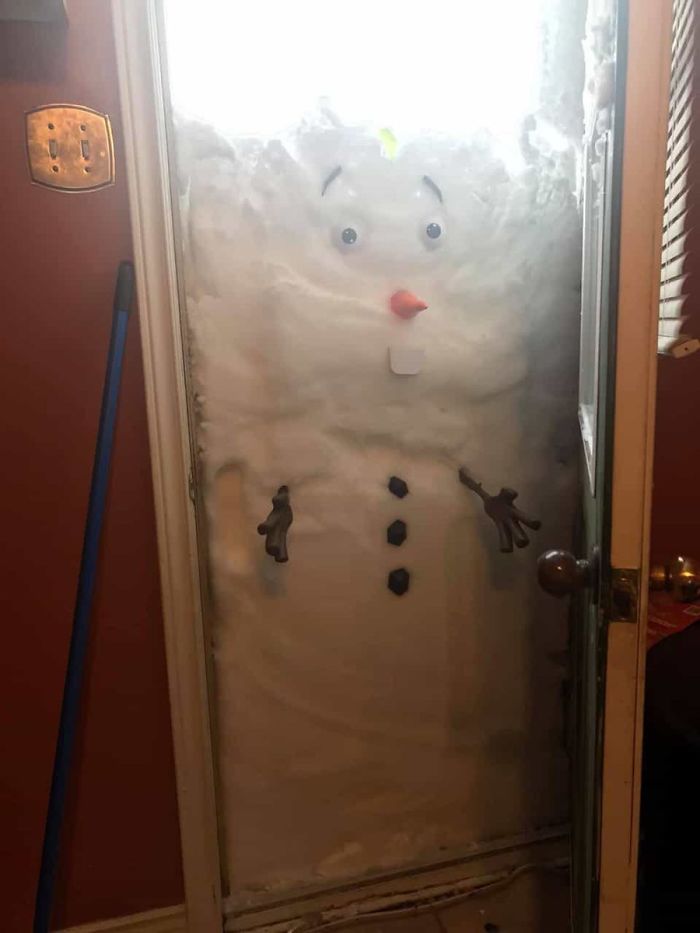