18 Dog Breeds That Have Changed Over The Last Century

Dogs have been our furry companions for thousands of years, but they didn’t always look the way they do today.

Many well-known dog breeds have changed a lot physically in the last century, thanks to humans.

By identifying specific traits — such as size, coat color, and demeanor — and allowing only those animals to mate, humans have created at least 167 different “breeds,” or groups of dogs with unique physical and mental characteristics. Still, they’re all part of the same species.

The Science of Dogs blog put together a side-by-side comparison of several popular breeds from the 1915 book “Dogs of All Nations” by Walter Esplin Mason, showing what they look like today.

Incredible images show how different dog breeds have evolved over the past century, from basset hounds’ ears getting longer to pugs developing flatter noses. 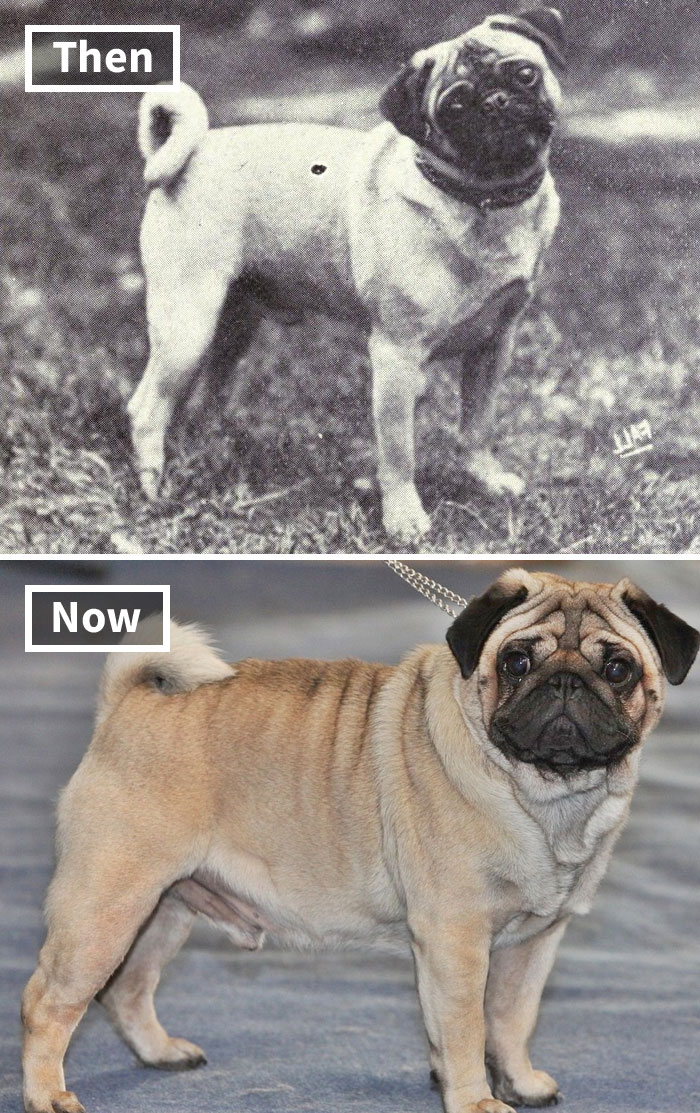 Wikipedia Commons – These cuties are roughly the same size they were a century ago, but they were bred to have bigger eyes and flatter noses. Unfortunately, it has been linked to breathing problems and other health issues. 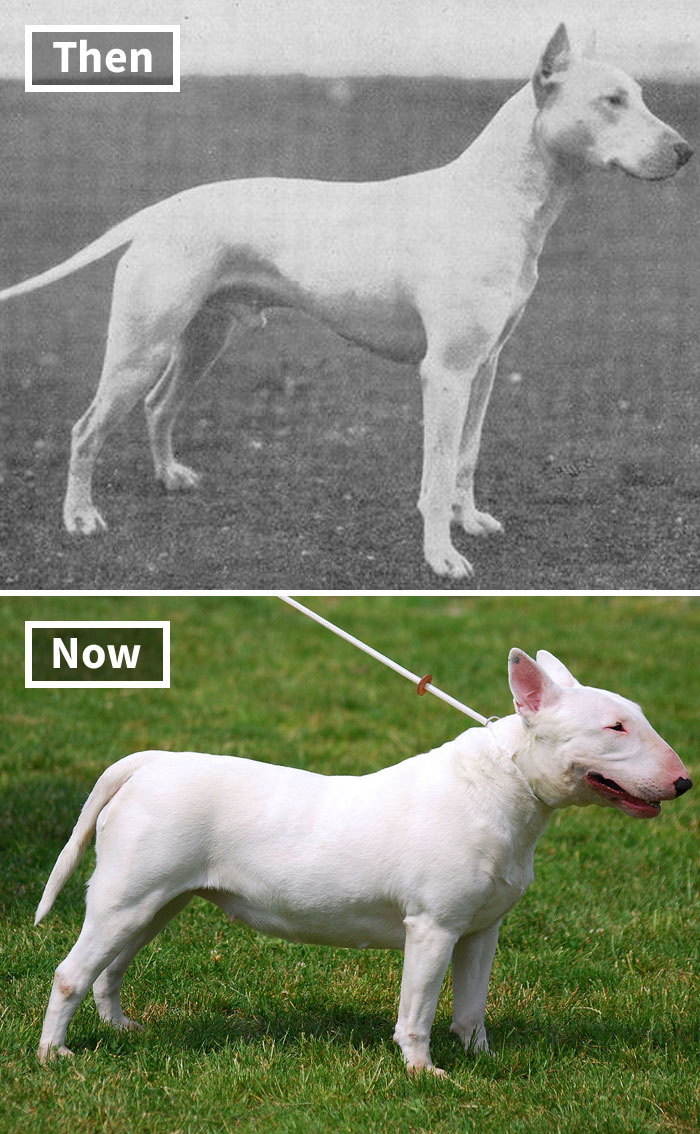 dogsofallnations – The face of the bull terrier became shorter, while the jaws as well as the bridge of the nose became larger. The body shape became more muscular and legs—shorter. 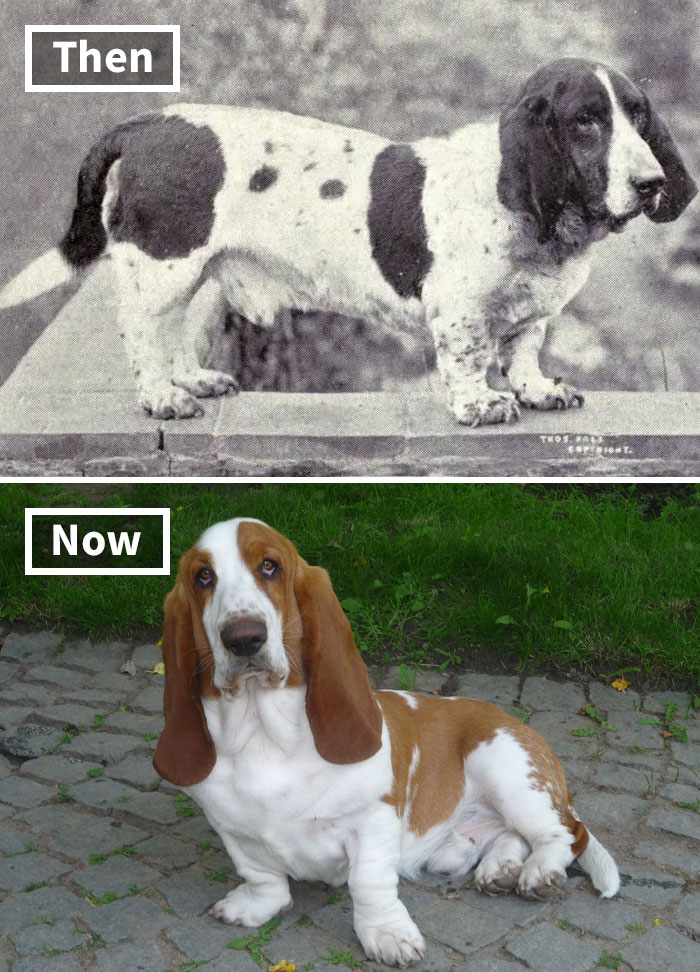 dogsofallnations – The hind legs of the basset hound became shorter, while the ears became a lot longer. Their face also became shorter, and the skin now has more folds than it did before. 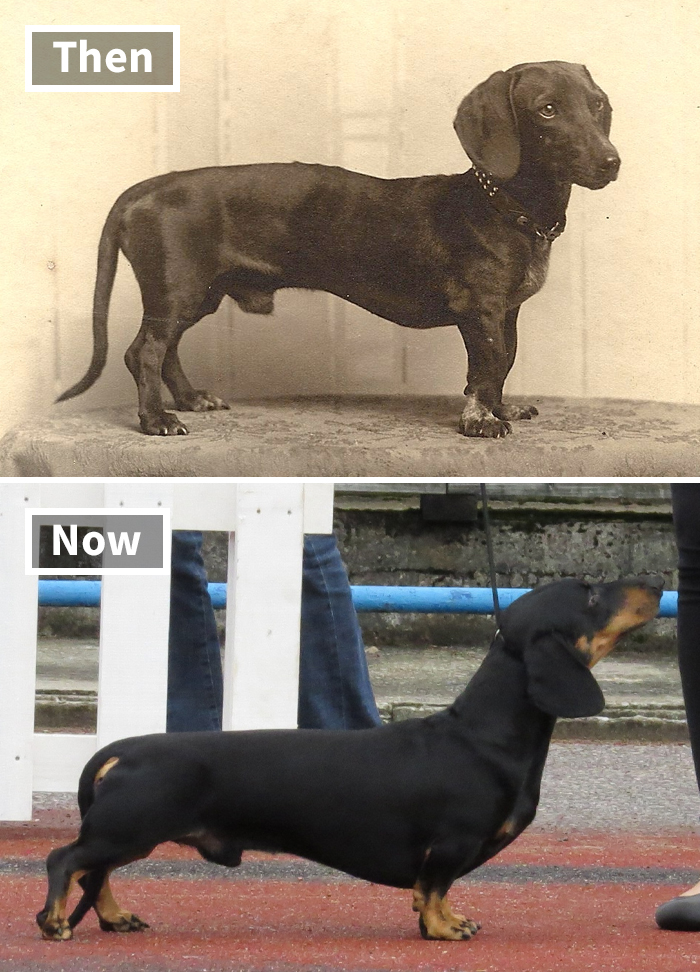 homedesignfordogs – Today, the sausage dogs have a longer face and body. Also, a chest that’s slightly wider and hind leggies—shorter. 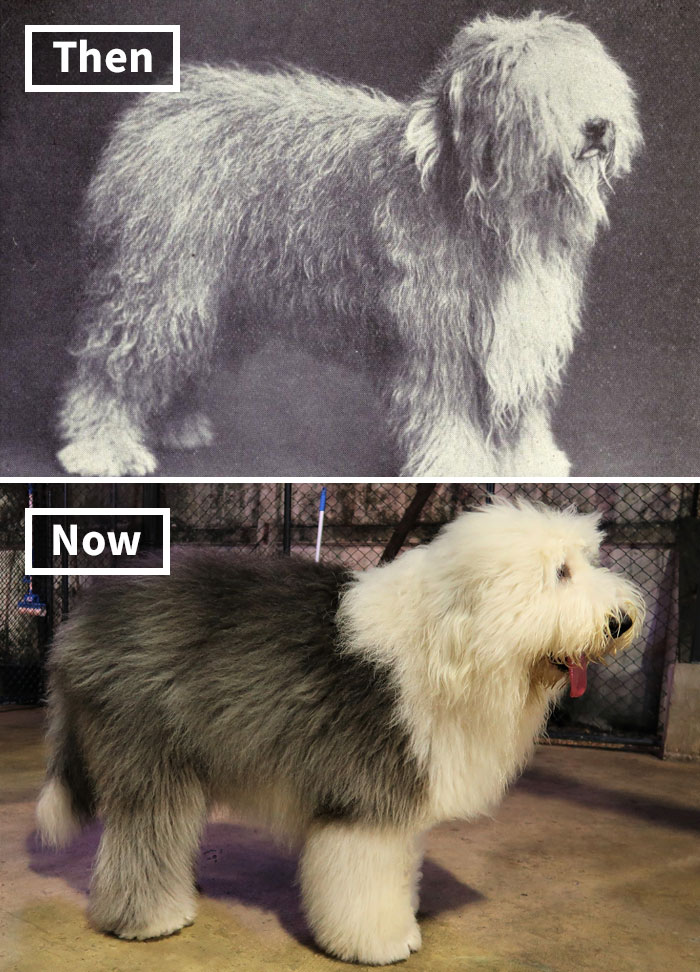 dogsofallnations – The Old English sheepdog used to be much shaggier than it is today. Apart from that, the looks haven’t changed much over the last 100 years. 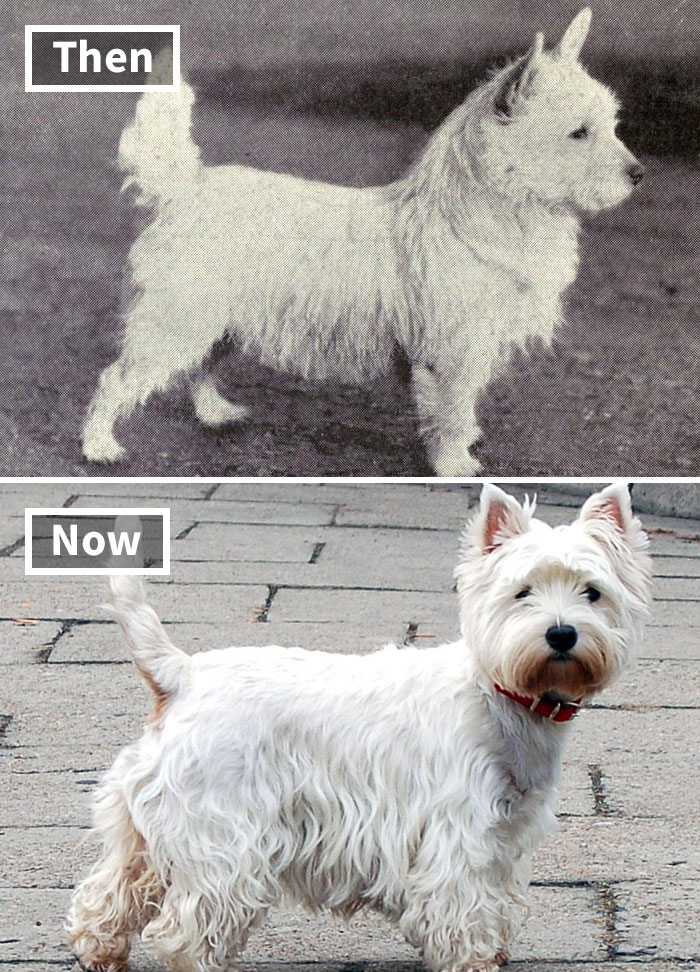 dogsofallnations – This cutie hasn’t changed a lot during the years (probably because he was already so darn cute), but the fur became a little bit longer and thicker. 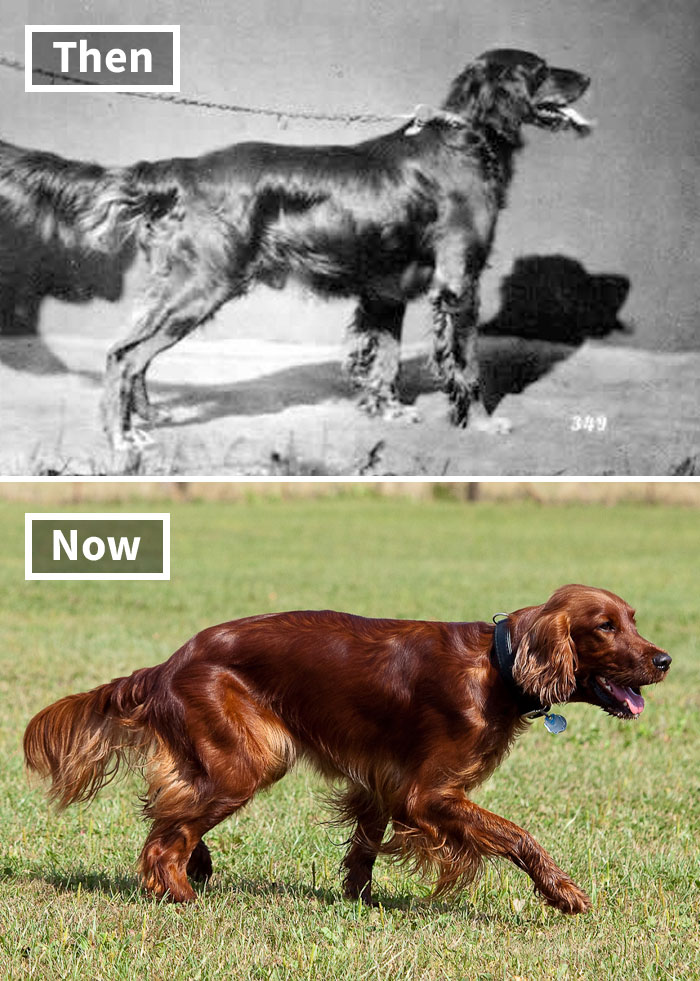 Wikipedia commons – Irish setters haven’t changed much, except for a longer and thicker coat they now have and a slightly thinner body. 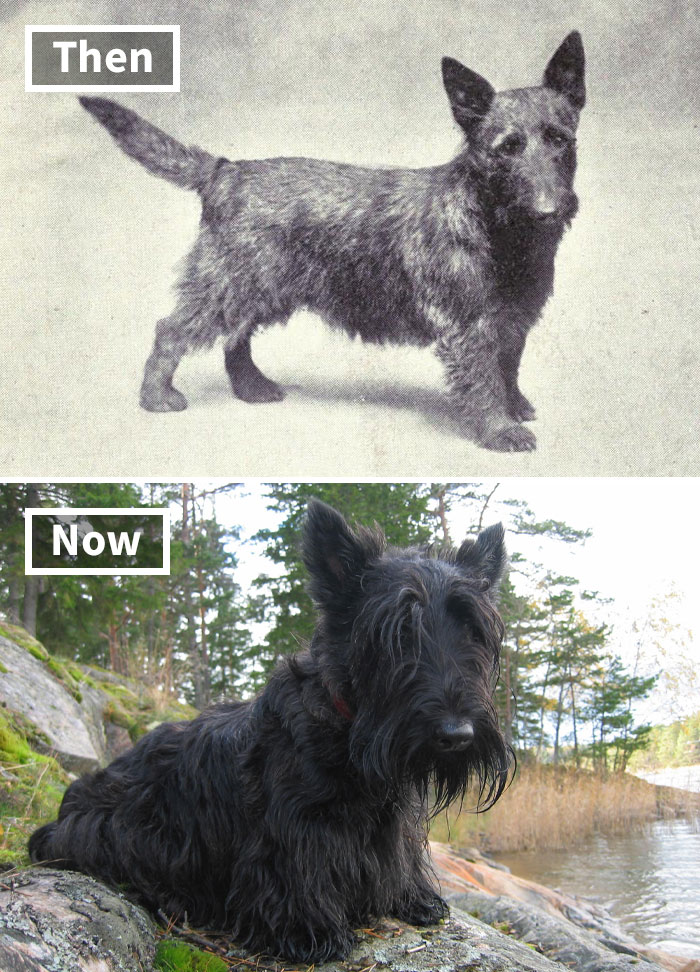 dogsofallnations – The coat of the Scottish terrier is now much longer, and also has a slightly different texture, which makes it softer. 100 years ago, their coat used to be wiry. 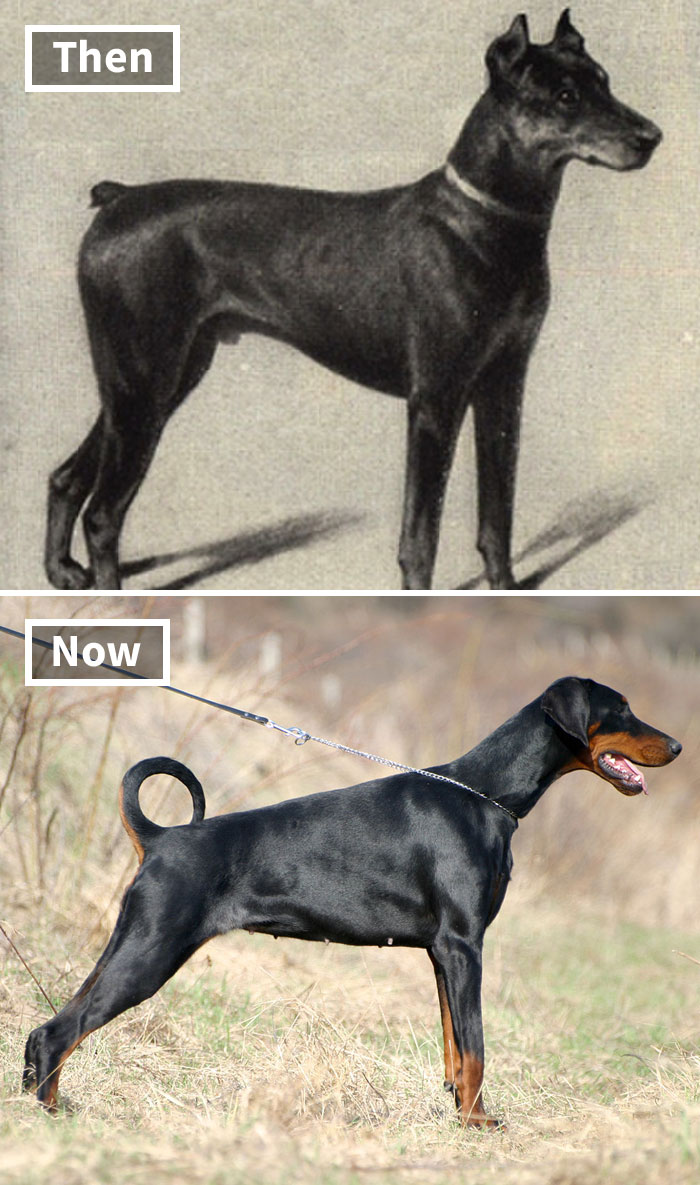 Wikipedia commons – The body shape of Dobermann became more slender, while the ears look slightly different, too. Also, they’re not as aggressive as they used to be a century ago. 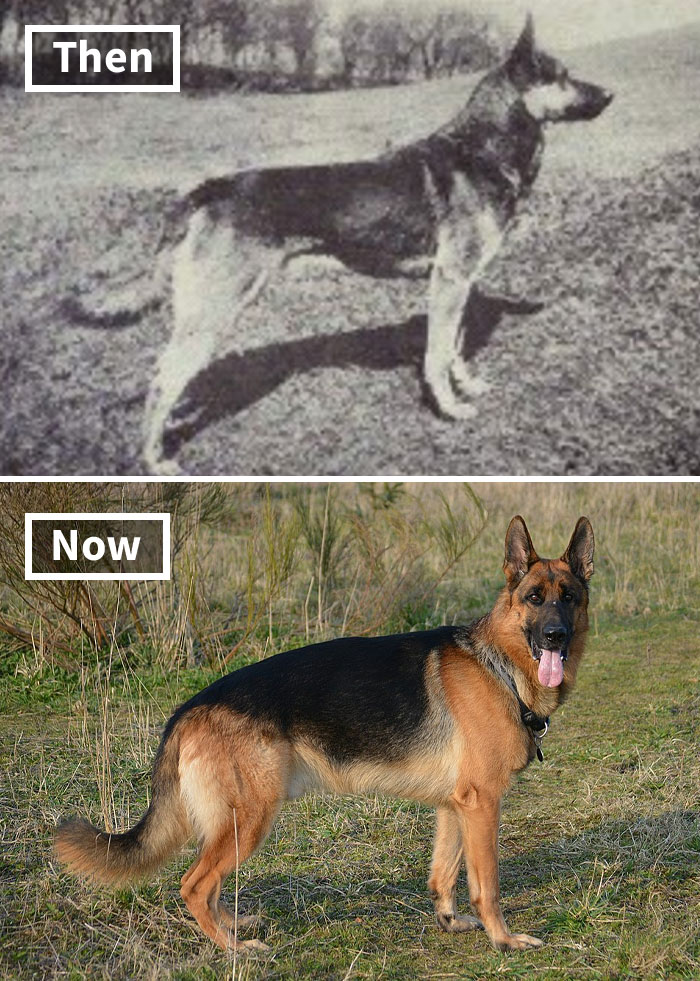 Wikipedia commons – Over the course of 100 years, German shepherds became larger, while their fur became longer and thicker. The skeleton has changed slightly too, while the chest of these majestic dogs is now wider. 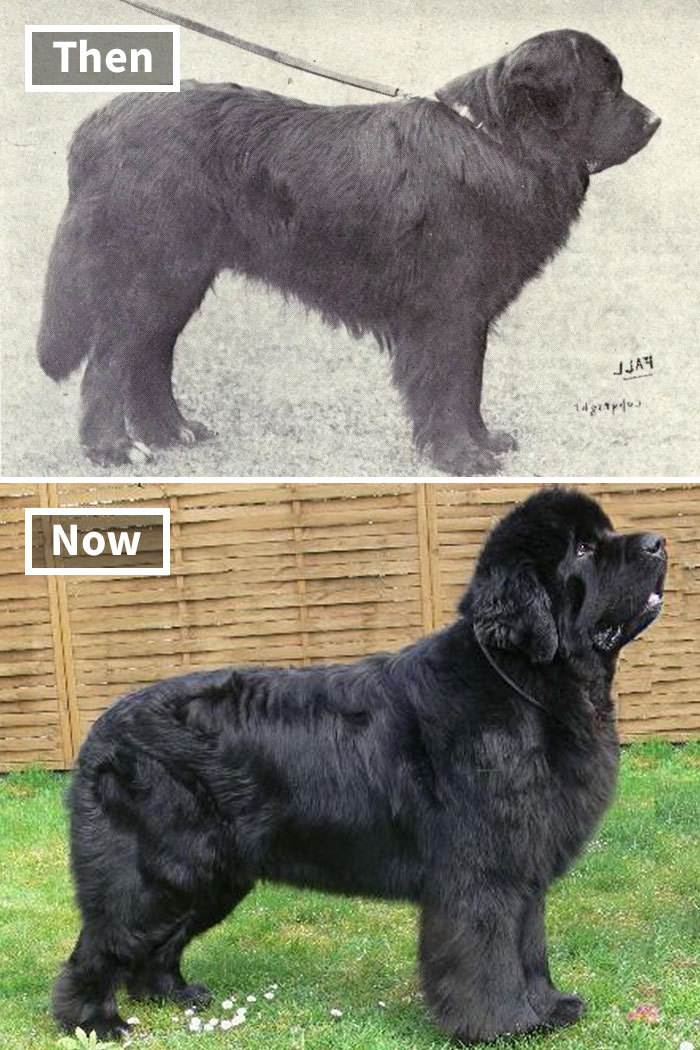 dogsofallnations – While they appear rather similar, Newfoundlands were likely much smaller than they are today. “Dogs of all Nations” writes that the breed weighed somewhere around 100 pounds back in 1915, whereas today, Newfoundland males can weigh up to 150 pounds. 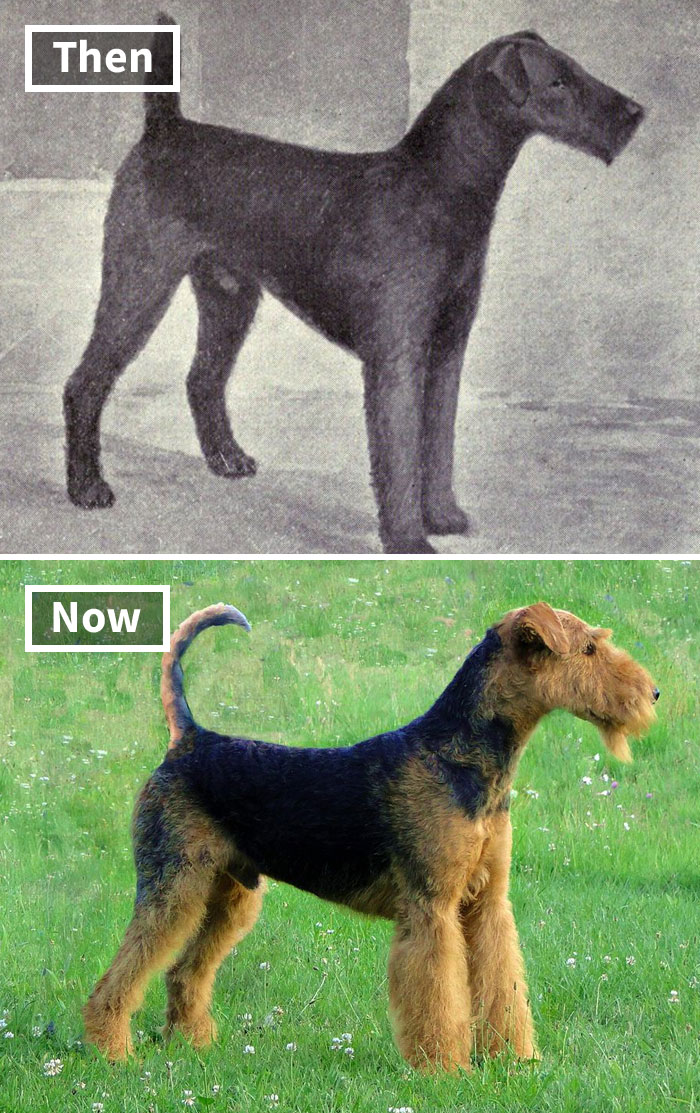 unknown – These cuties haven’t changed much, except for a shaggier coat and a longer face with more fur. 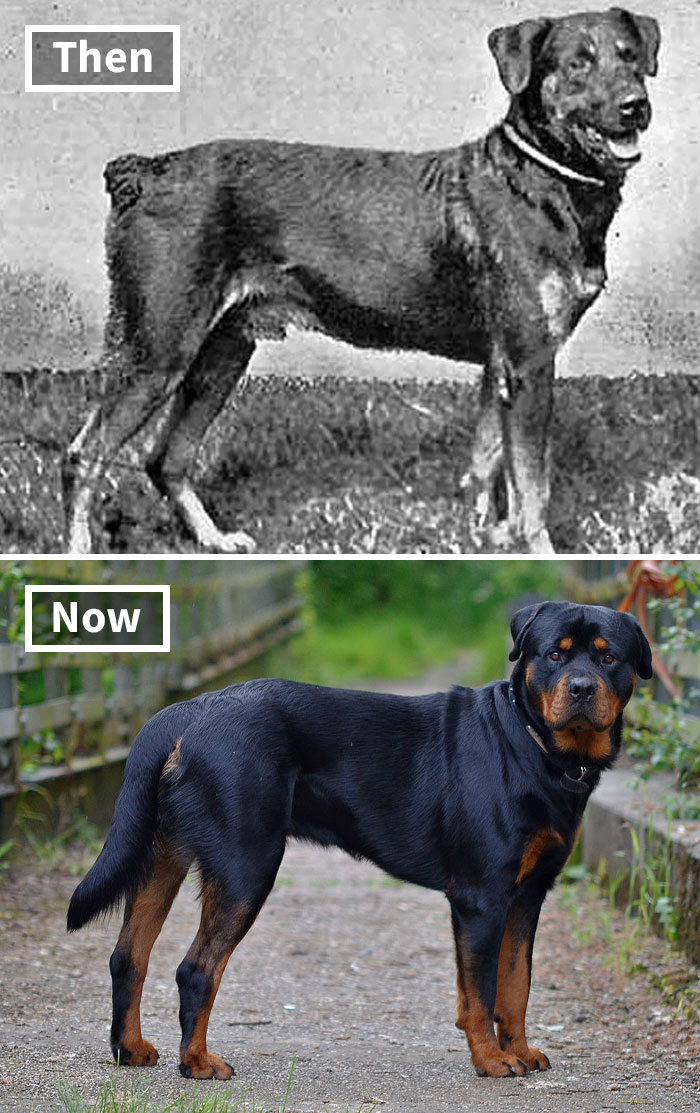 Wikipedia Commons – As you can see, Rottweilers today don’t have a docked tail anymore. Also, their coat is now coarser than it was before. 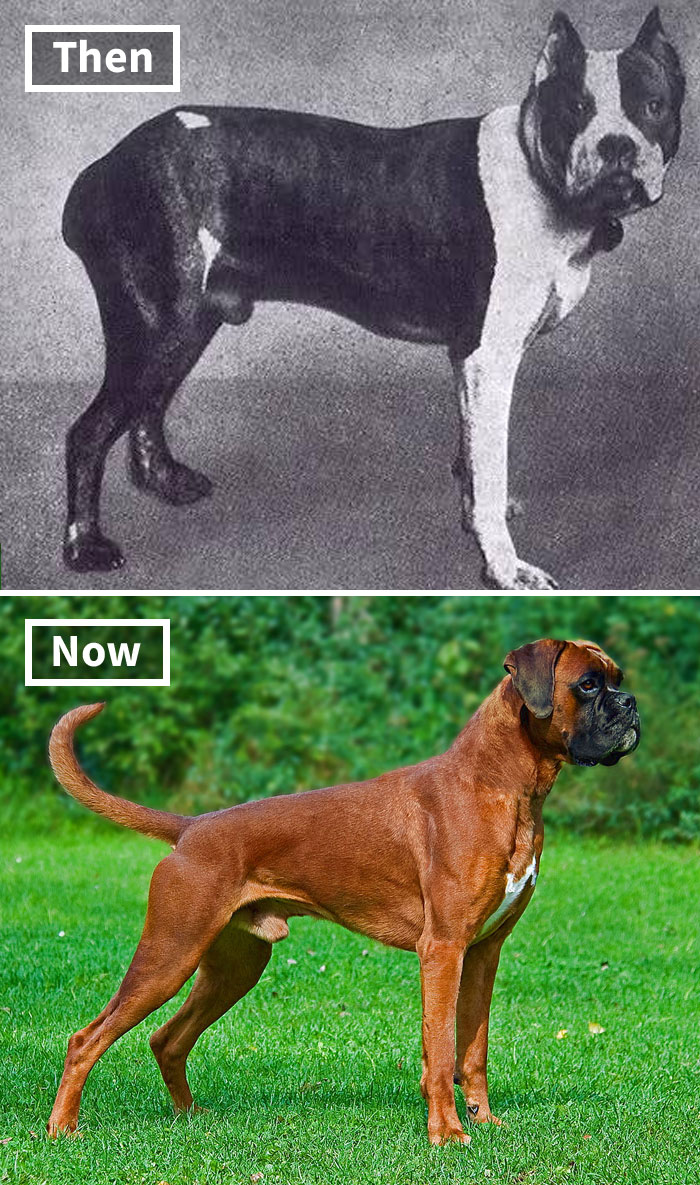 dogsofallnations – The body shape of the Boxer was obviously altered, while their faces used to be longer and more downturned than they are today. 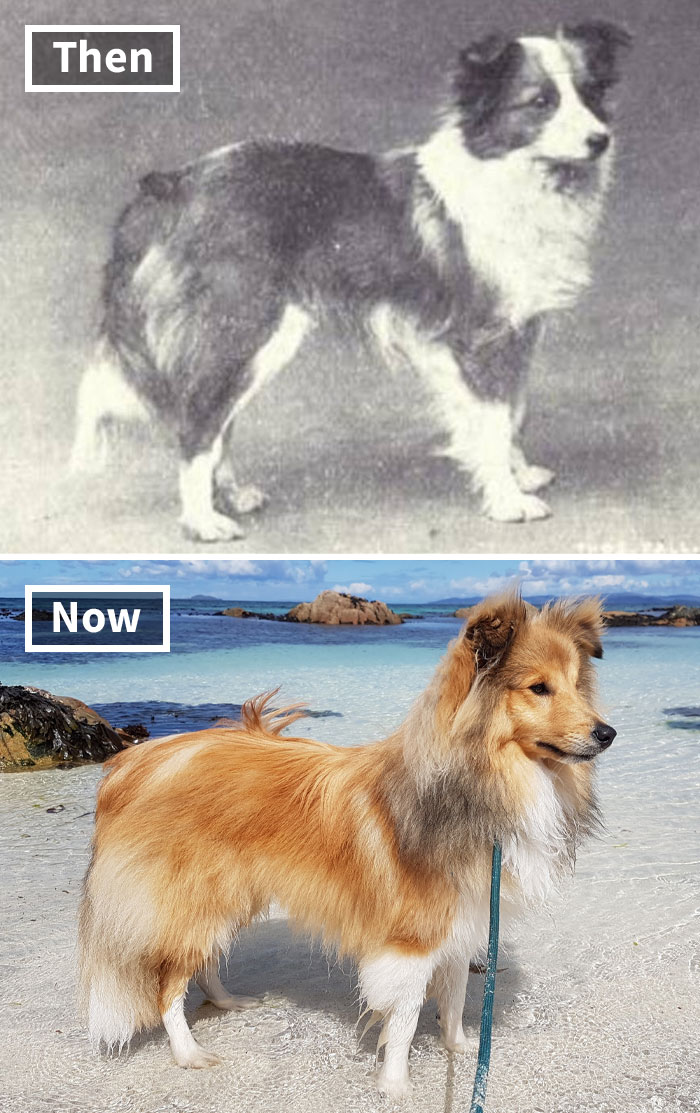 unknown – During 100 years, the Shetland Sheepdog has doubled in size, while its fur also became longer. 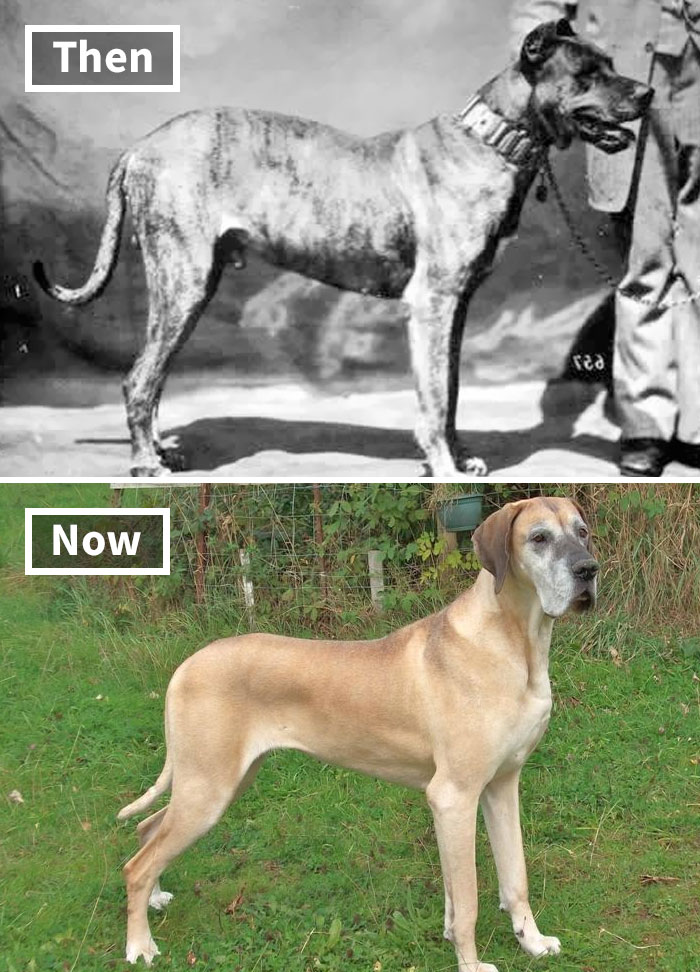 unknown – These long-legged dogs used to weigh less than they do today. According to “Dogs of All Nations,” they used to weigh around 120 pounds, while today, males can reach up to 175 pounds. 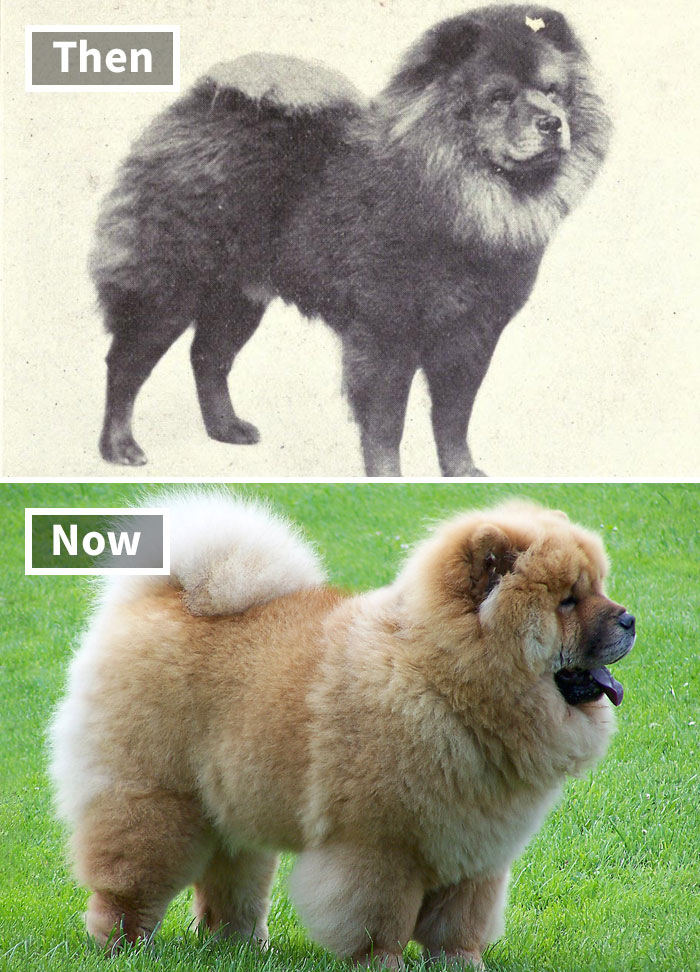 dogsofallnations – These adorable balls of fluff weighed around 50 pounds a century ago. Today, they weigh up to 75 pounds. In addition to this, the faces of Chow Chows became more wrinkly. 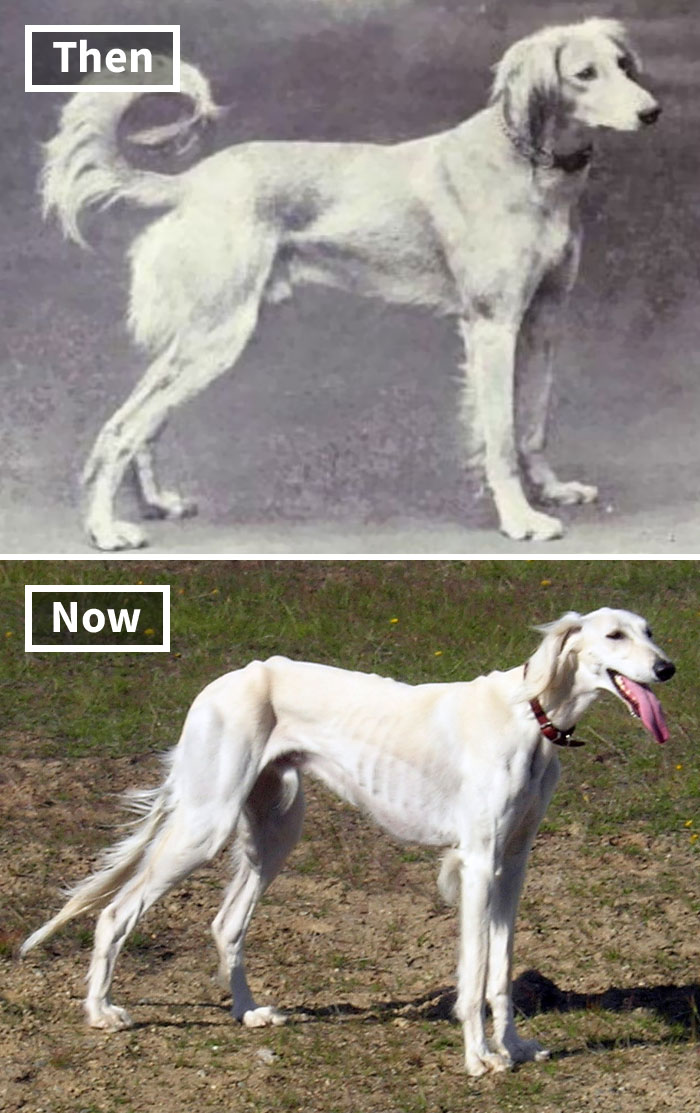 unknown – The Salukis have become even taller than they were before. Today, they are also thinner, have longer ears, and legs that are thin and long.