It is so awesome sometimes to get together with the family and walk down that memory lane, looking at old pictures of your family or hearing stories of what your parents and grandparents used to do in the time when technology didn’t rule the world.  The pictures we take today differ a lot from what we see in our parent’s photo albums. Before what mattered was trying to fit everyone in a frame with a big smile on their face, and today most of the pictures are filtered trying to capture only a good feature of our face, be that an eye or lip or whatever.

Those old images definitely show more history than the pictures we take today. Some of them are just hilarious because they really show the moment or a person s it was without being edited a million times like we do today, and the best thing is that you get to learn a side of your family that you never did before. For example, that sweet, loving, and caring grandma that makes sure your tummy is full all the time, back in her days used to be a badass with a sense of style, who knew how to enjoy her days.

To bring back this forgotten moment of the past, Awkward Family Photos is an online platform where people get together to submit the funniest images of the past with a description below them. One thing is for sure, that once you start scrolling through those images, you won’t be able to stop. And you will probably be motivated to go rumble on your old boxes with images on them, to share one embarrassing, awkward moment of yours as well. Below we have made a collection of some of the most hilarious stories and the images we came across.

Scroll down to crack yourself up with some of the most amusing awkward family photos on the internet. 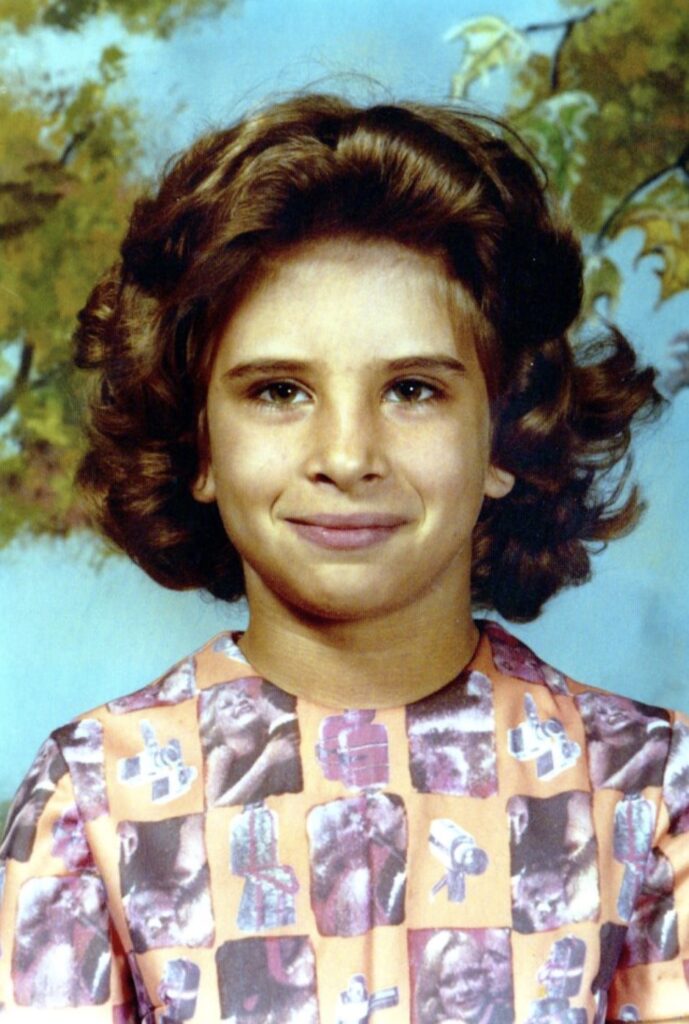 “My grandmother, bless her heart, made this dress for me by hand. However, she never noticed the fabric she was sewing was covered with pictures of a couple making out. She then rolled my hair and sent me to school…on PICTURE day… I still love you MawMaw.”

“Turned the corner to go into the living room, expecting nothing out of the ordinary, and was immediately taken aback to find this scene going on quietly.” 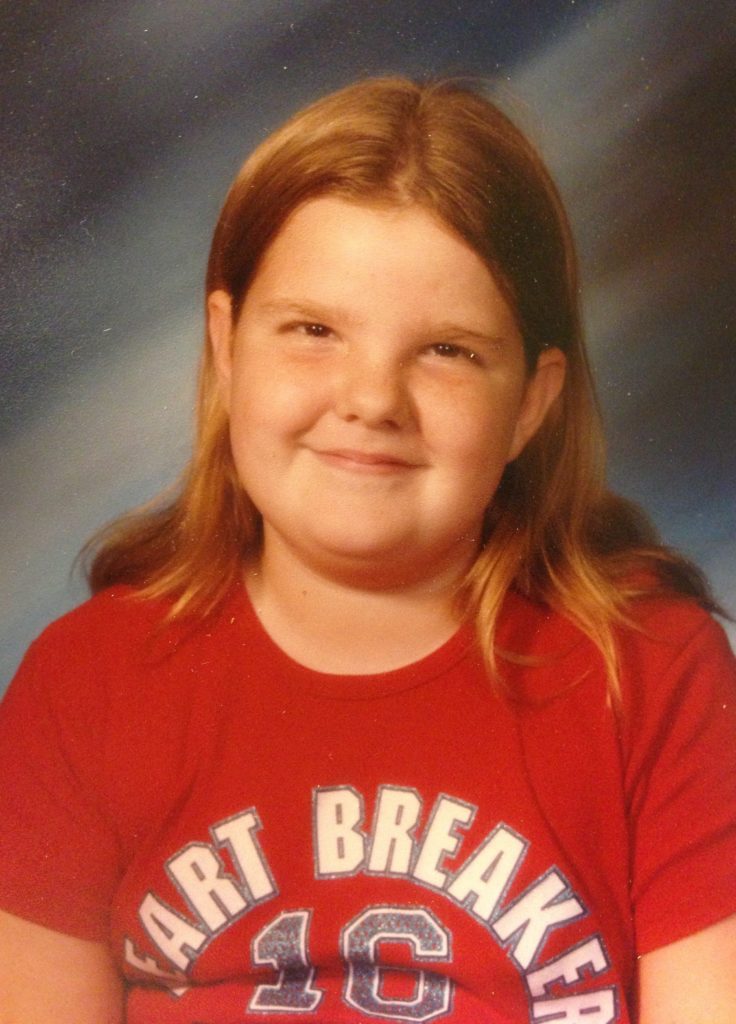 “My poor daughter never heard the end of it from her siblings after her heartbreaker tee shirt turned to fartbreaker for school pictures.” 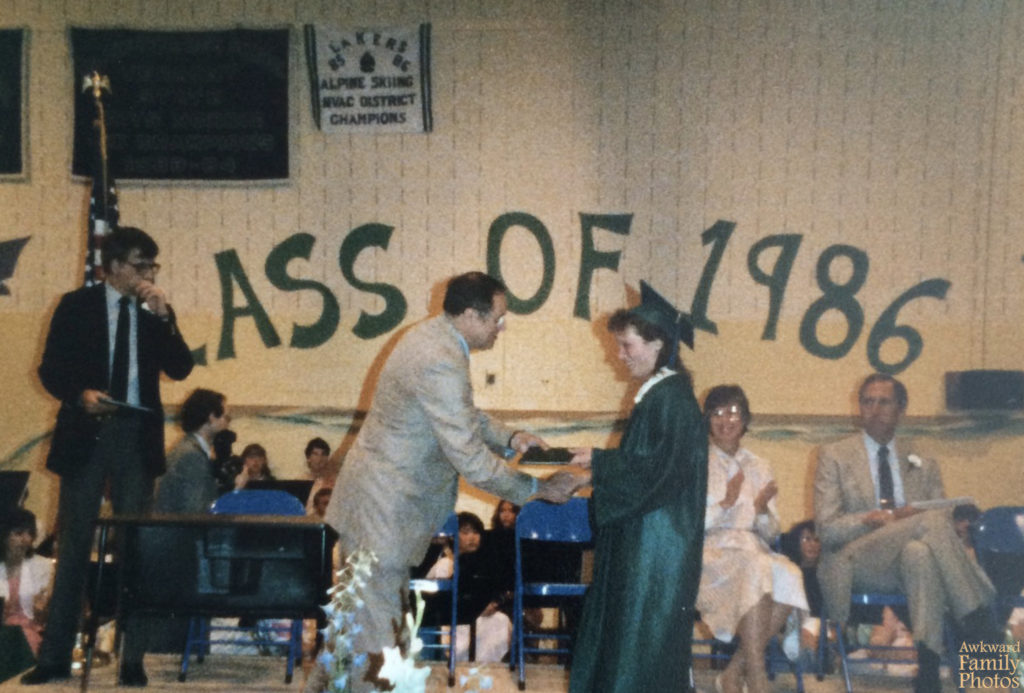 “This is my sister graduating high school back when you had to wait to get photos developed.”

“One day, back in ’81 or so, MawMaw thought it would be a good idea for us to all enjoy a few glasses of her fermented ‘friendship punch’ before heading down to the photo studio at K-Mart.” 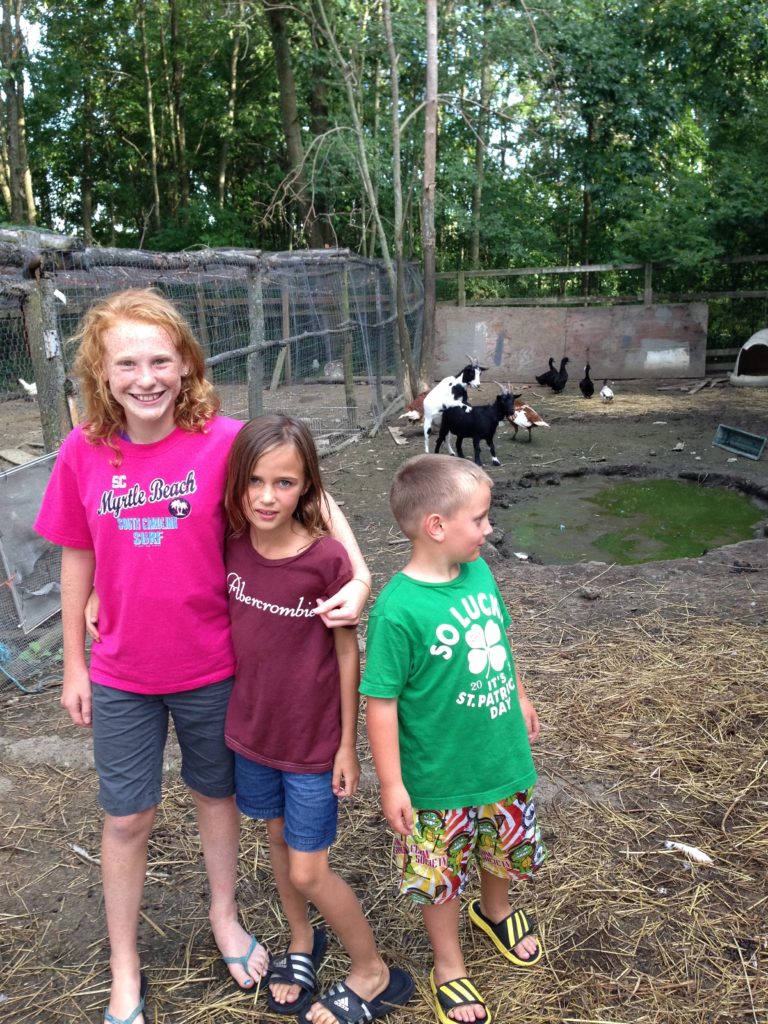 “This was taken on my in-laws property. My father-in-law was a businessman but for some reason he thought he was a farmer too. Apparently he was bad at disciplining his goats.” 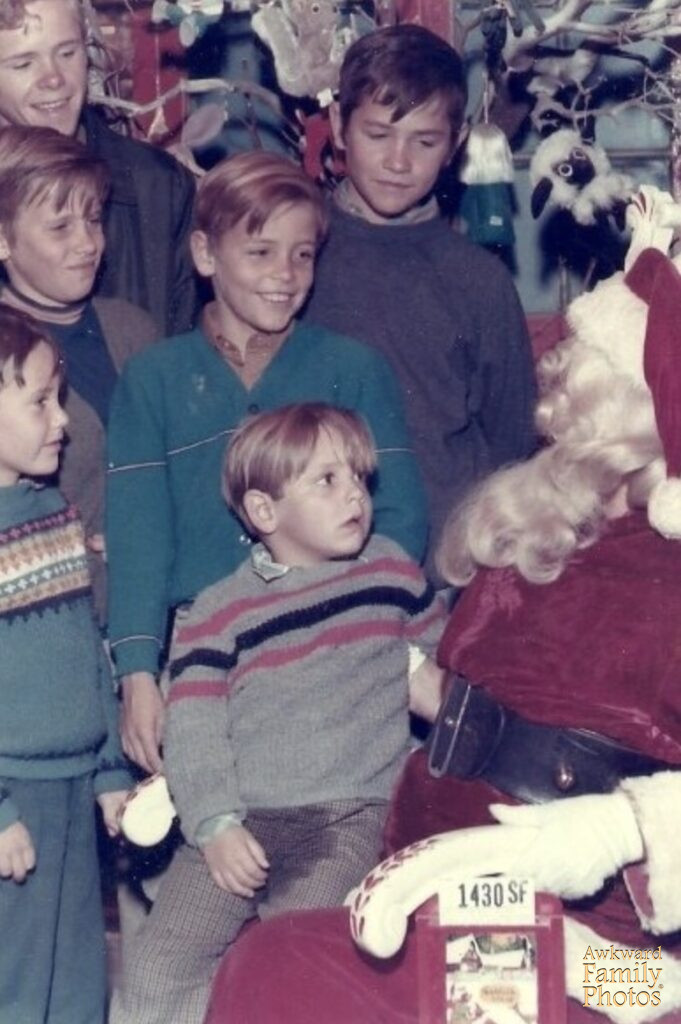 “This is a picture of my dad and uncles sitting with Santa. My uncle Tex is the youngest who was clearly a bit nervous.” 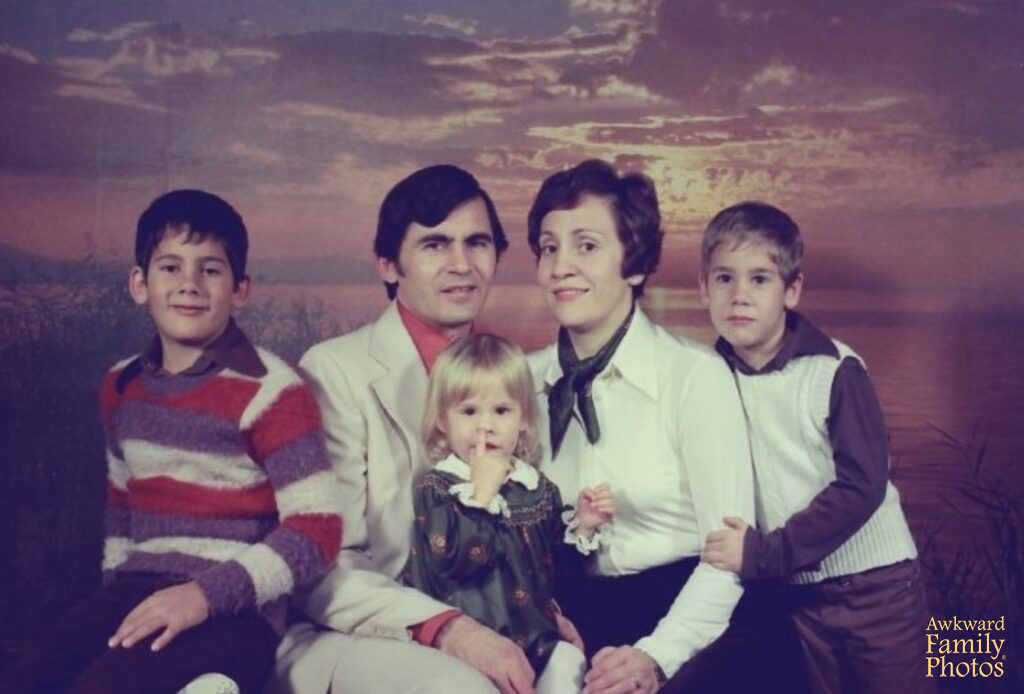 “This is my family. Maybe 1977. The beautiful backdrop of the golden sunset on wallpaper accentuates the glow of happiness on our faces. My little sister is clearly the champion. My dad was a part time photographer in the 70’s, and we took lots of posed family portraits. This one my sister found deep in the archives of old negatives. It never saw the light of day….until now.” 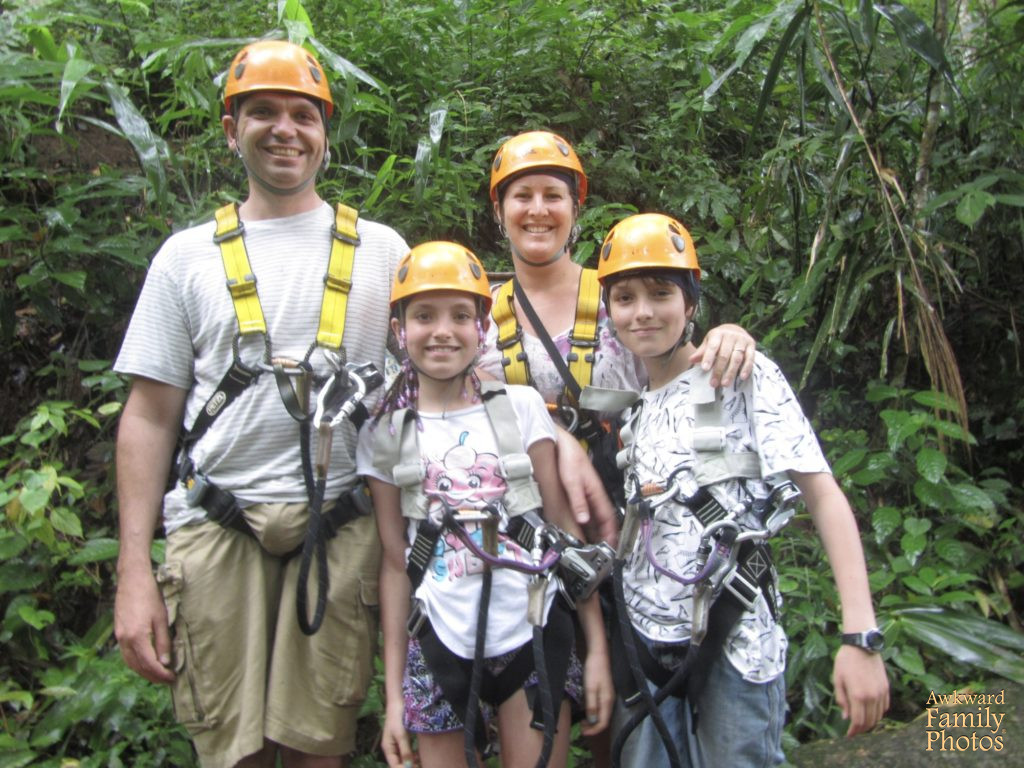 “This was taken just before we were attached to a steel cable and hurled through the Thai jungle (like a flying fox – the tour was called “Flight of the Gibbons.”) As you can see, my husband looks like he was quite excited about the tour.” 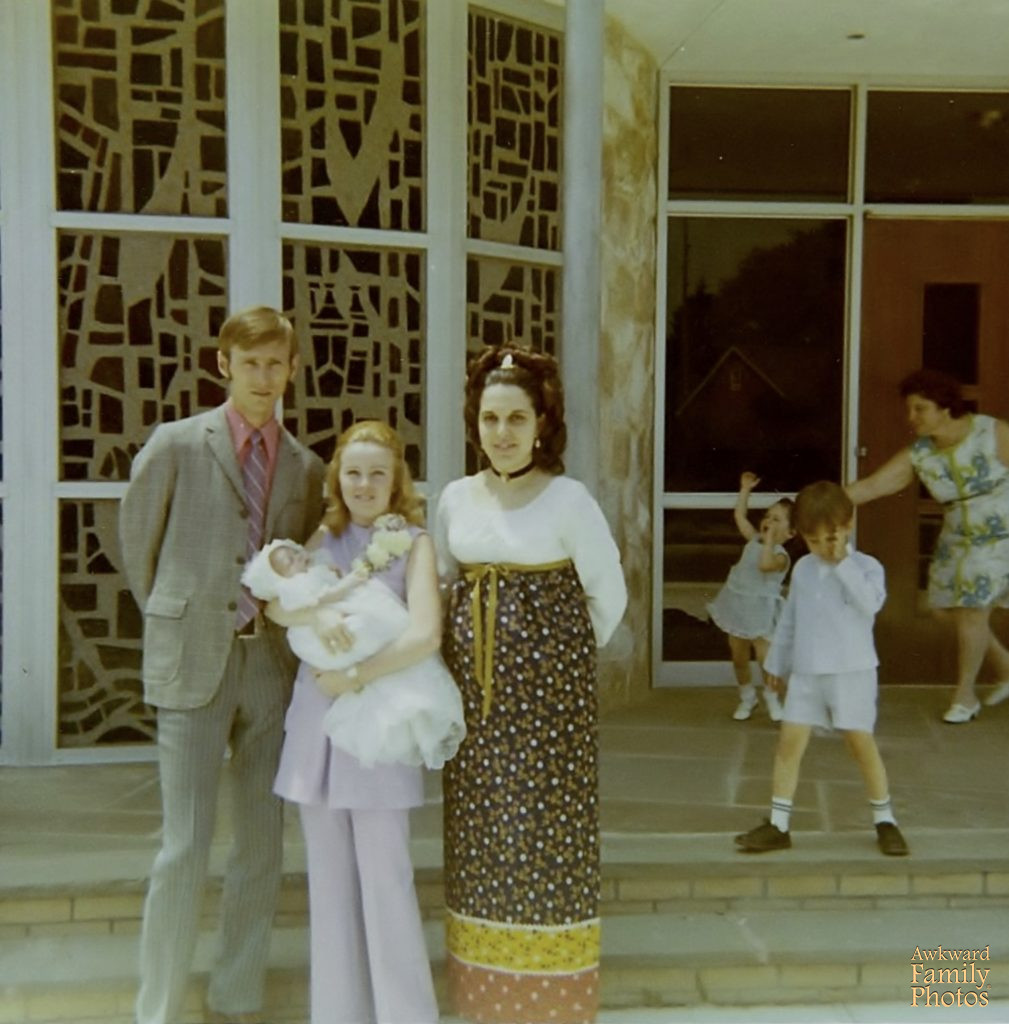 “This was my Christening, June 1971. I’m the baby obviously, my Godmother is holding me, my parents are next to her. Their hideous outfits aren’t the “awkward” part of this photo. In the background, my grandmother is pulling my sister’s hair while my brother is recovering from a smack! All of this right on the front steps of a church.” 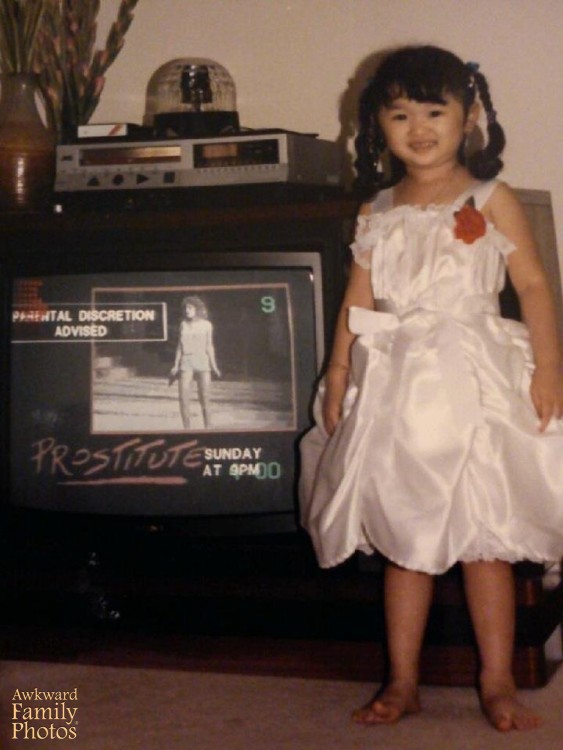 “This is me at approximately 4 years old, in 1988. My brother came across this gem during a move. I sent this to my dad, asking if he remembered taking this picture, since he was the main picture-taker in our family. His response was, ‘Oh I did! You look so pretty and cute!’” 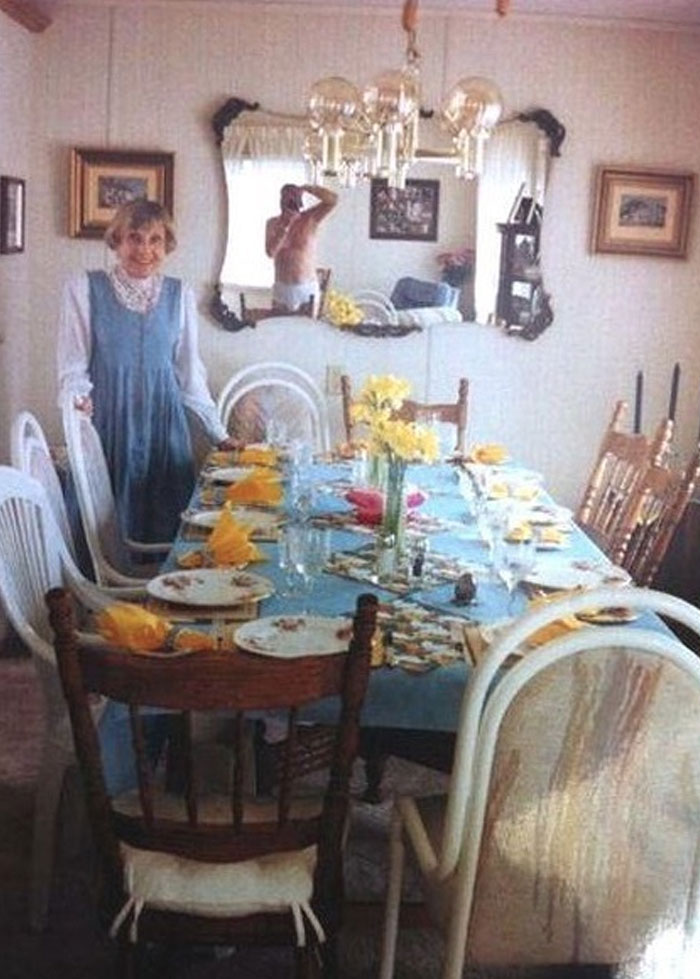 “Grandma wanted a photo with her Thanksgiving table settings. Nobody thought to check the mirror.” 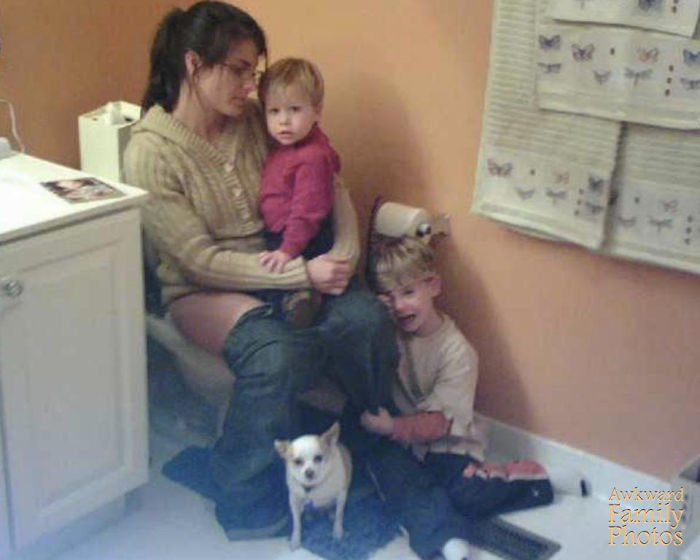 “My mom has this picture hanging on her wall in her house for everyone to see. She sends it to me every Mother’s Day. This is me when my kids were little. Apparently, my kids needed me and so did the dog, while I’m on the toilet.” 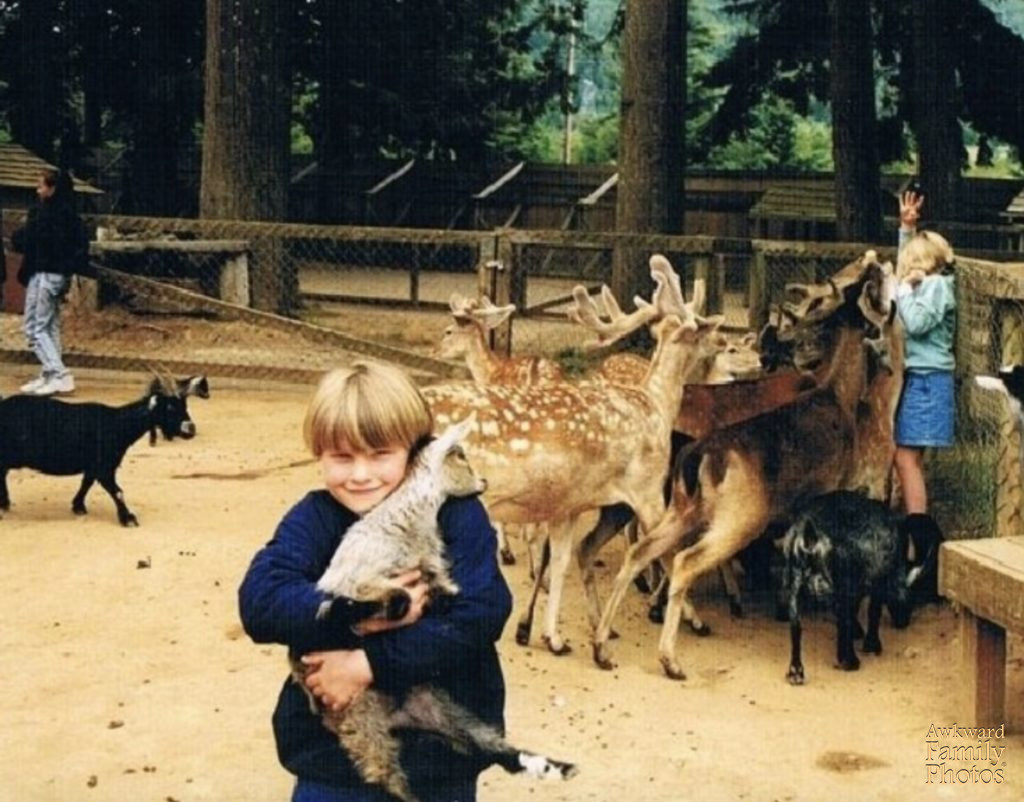 “This photo was taken at West Coast Game Park Safari located in Bandon, Oregon around 2000. As we walked into the park my sister saw a baby goat and picked it up while I was feeding one of the deer. Next thing I know I am bombarded by deer and goats. My parents snapped the photo of my cute sister without seeing me in the background.” 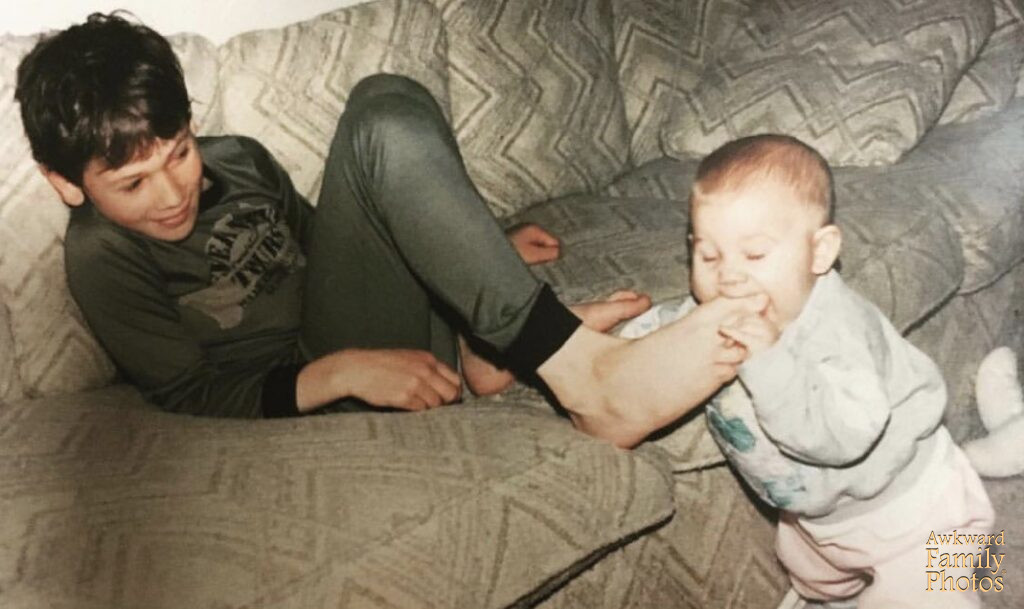 “I was 8 years old with size 8 feet in this picture. My skis and I were thrilled to assist in her teething process.” 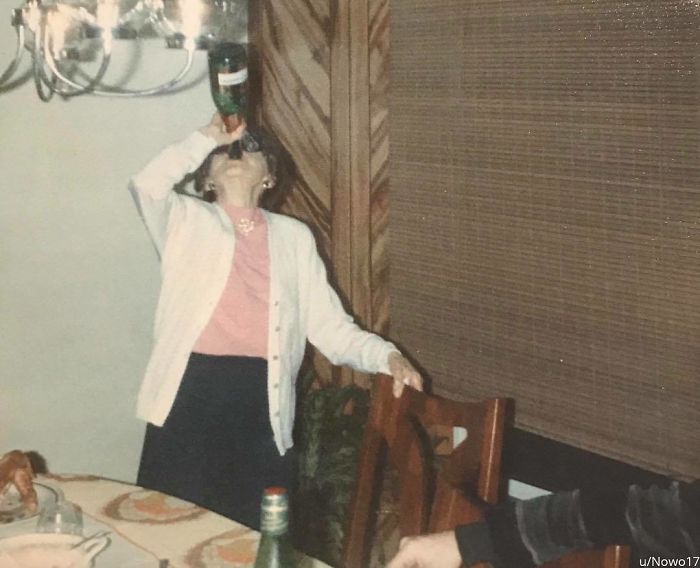 “My Great-Grandmother, born in 1899. Never met her, but definitely a legend.” 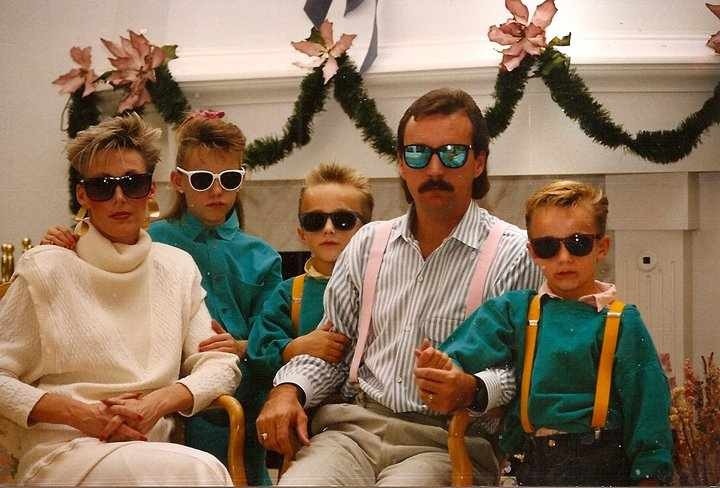 “This is a family pic from when were kids. We were the cool family on the block.” 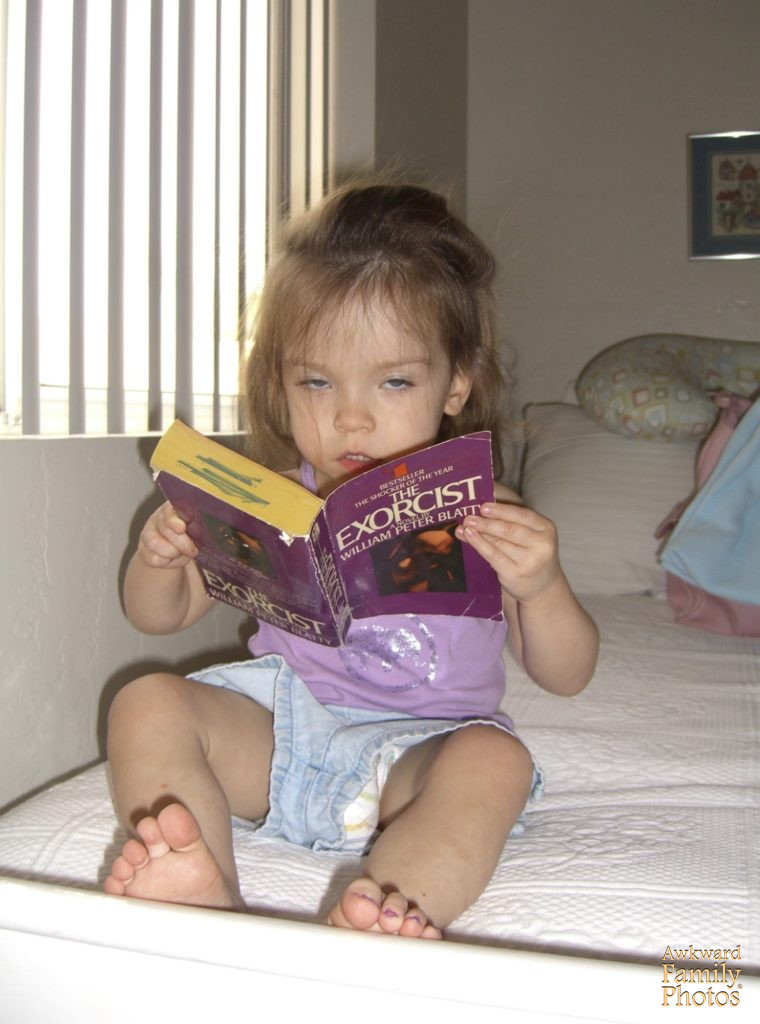 “This is a photo my mom captured of my then 2-year-old daughter.” 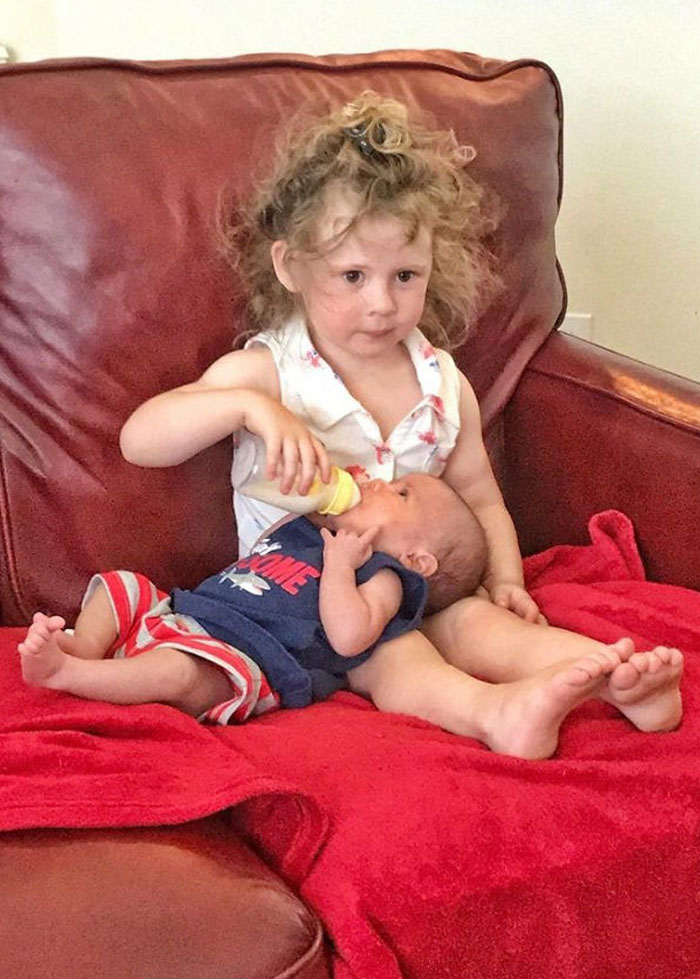 “My daughter looks like a mom that regrets all her life decisions.” 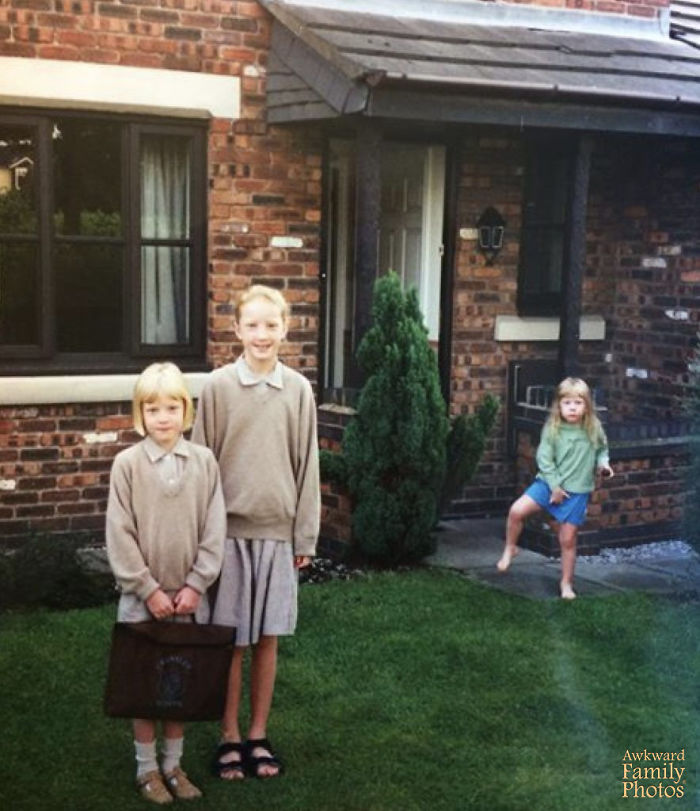 “There’s a reason why my sisters were accepted into private school and I wasn’t.”

People Share Who Was the Dumbest Person They Met, and the Answers Will Make You Feel Bad for Laughing Previous post
15 Terrible Maps That Illustrate the World Hilariously Next post