Every other August, dozens of volunteers gather near the Grand Place in Brussels to compose a 19,000-square-foot, floral rug that blankets the central square. The massive installation is woven with one million begonias—a hearty flower that Belgium is the largest producer of worldwide—that last just four days before wilting.

Although the 2020 edition of the “Flower Carpet” event has been postponed, Berlin-based Joerg Daiber, of Spoon Film, captured the 2018 iteration in a short timelapse that shows how the vibrant tapestry is fabricated.

Flower Power in Brussels, a video by filmmaker Joerg Daiber captures the volunteers from 2018 as they arrange the colorful flowers—more than 500,000 fragrant begonias and dahlias, along with grass and bark—into the planned design. Via Wikipedia:

In 2018, the carpet featured cultural elements from the state of Guanajuato, Mexico, including symbolism from the Chupícuaro, Otomí and Purépecha cultures. In addition to the begonias, the carpet included dahlias, the national flower of Mexico.

Scroll down to see the building of the Flower Carpet and take a closer look at this incredible work of floral art through Daiber’s video. 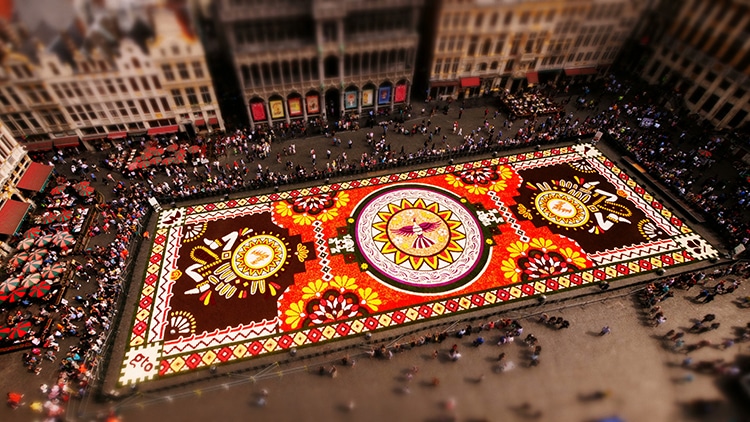 Daiber’s enchanting “miniaturizing” effect can be seen in his other videos documenting beautiful sites around the world, published on his channel Little Big World.

While the Flower Carpet scheduled for this summer must be postponed, Daiber’s work preserves the 2018 tapestry until a new carpet can be created once again. The 2018 theme, “Guanajuato, Cultural Pride of Mexico,” honors the Mexican city of Guanajuato which similarly creates ephemeral tapestries of sawdust in the city streets.

Volunteers gathered to assemble thousands of begonia flowers into intricate designs for an annual tradition in Brussels. 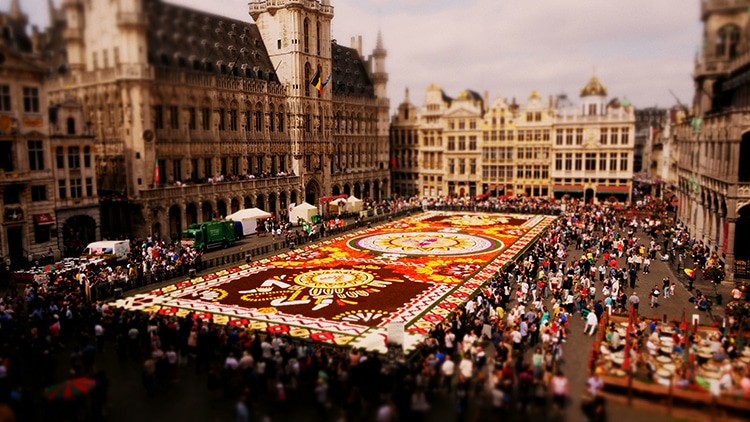 The resulting creation is made up of nearly a million flowers carefully arranged over 19,000 square feet. It is, in a word, gorgeous.

Which is why Daiber decided to go and visit Brussels in 2018, where he captured the event in his trademark miniature style.

“The film was shot from 3 buildings around the Grand Place in Brussels, but most of the shots were taken from the 90m high tower of the Brussels Town Hall,” Daiber tells PetaPixel. “It’s basically a long spiral staircase all the way up to the the top. I think over the course of the day I went at least 5 times up and down, getting stuck with my tripod and bumping my head quite a few times in the narrow upper part of the tower and getting more and more dizzy after each run.”

The effort, it seems, was worth it. And while he was initially planning to release the timelapse in time with the 2020 event, this year’s Flower Carpet has been cancelled due to the pandemic. So, since none of us can go and see this for ourselves just yet, and probably won’t be able to until 2021 or 2022 when the pandemic is passed and the Flower Carpet returns to the Grand Place, you can enjoy the next best thing: Daiber’s Flower Power timelapse. 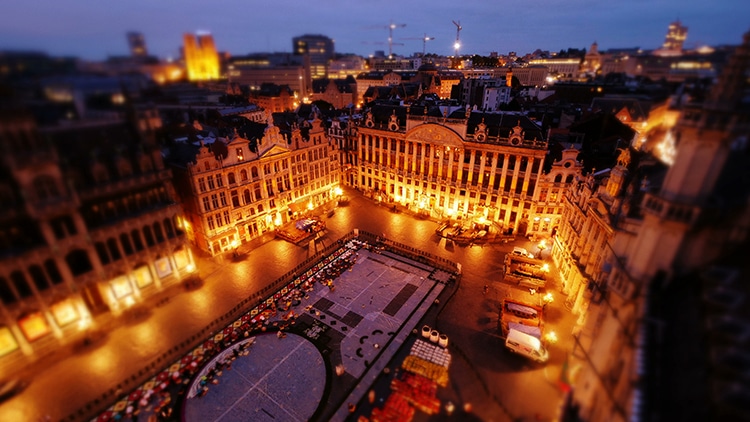 The tilt-shift effect makes them and the flower carpet look miniaturized. Daiber filmed the footage from buildings around the Grand Place, including the 90 meter (295 foot) high tower of Brussels’ Hôtel de Ville (Town Hall). 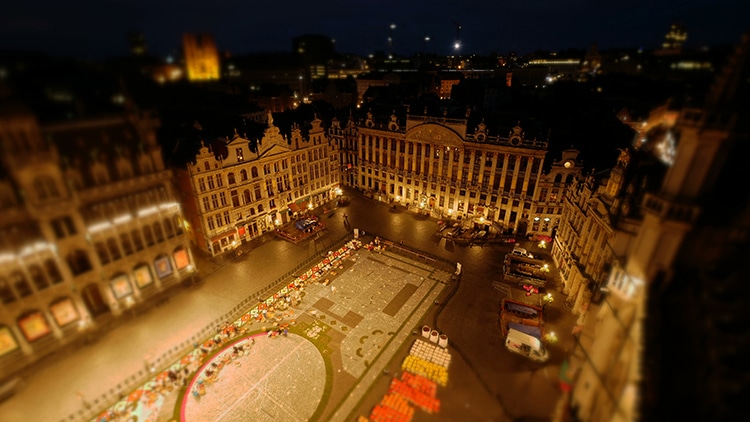 In 2018, the ritual Flower Carpet was recorded from start to finish by filmmaker Joerg Daiber. 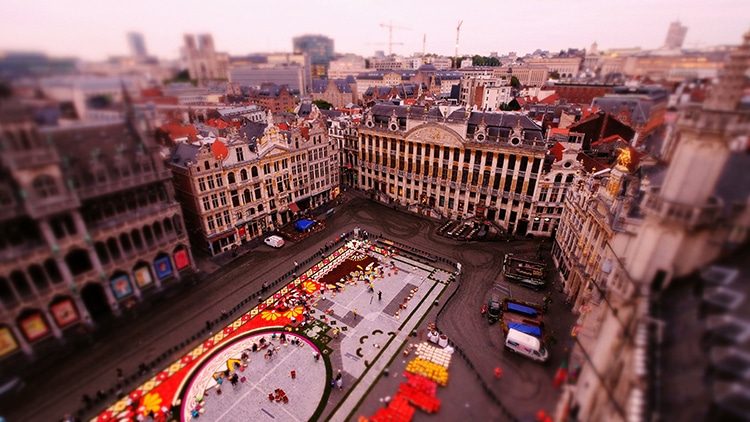 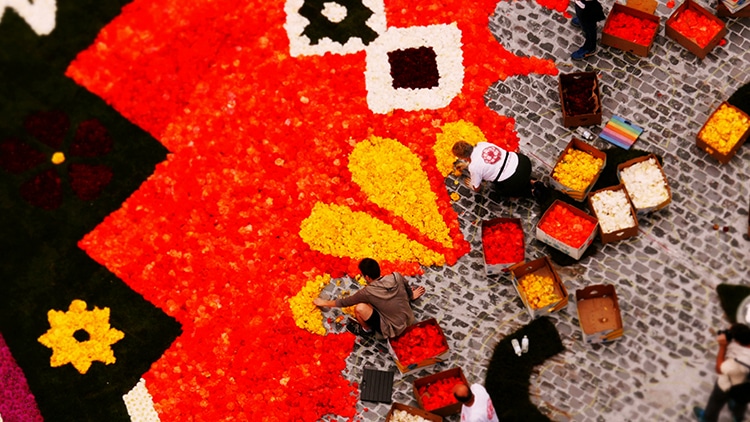 The theme honored a city in Mexico which has a “carpet” creation tradition using sawdust. 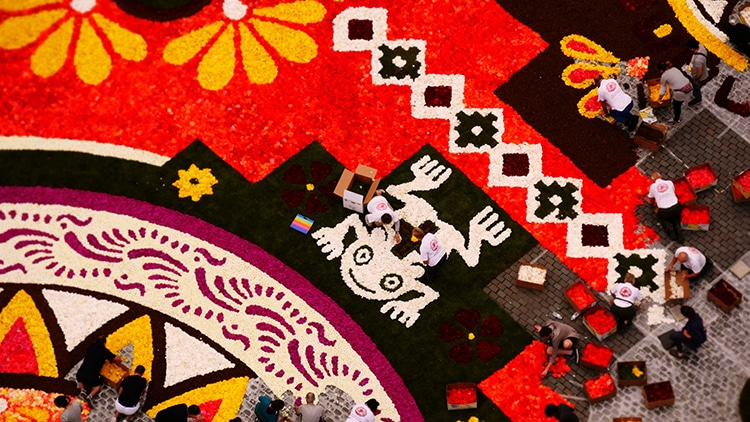 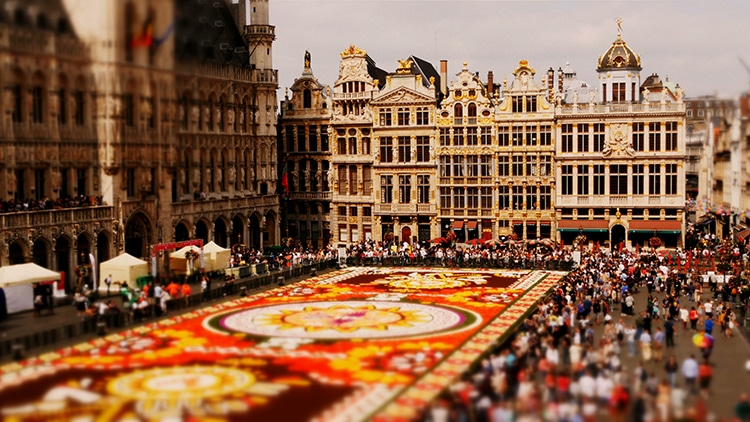 Watch Joerg Daiber’s beautiful video of the construction of the Brussels Flower Carpet:

If you’re hoping to satisfy more of your wanderlust, check out Daiber’s similarly tiny dives into Montenegro, Burma, and Mallorca, among dozens of other locales, on YouTube.