They say beauty is in the eye of the beholder. What one person thinks is attractive is often completely different than what someone else thinks. This is especially true when comparing the specific ideals of female beauty across different countries. The beauty standards set by the society we live in have tremendous influence on the styles and trends we are drawn to.

Here is an interesting example: in America, we see tan skin as beautiful. We strip down and have our bodies sprayed and contoured to get a golden glow. By comparison, a creamy complexion is considered beautiful in many parts of Asia. Japanese women often wear long sleeves and hats to the beach to keep their skin fair. When we are inundated with images of bronzed celebrities and ads for self-tanning products, it is easy to forget the same trend might not be as popular in other parts of the world.

Here is a look at some of the standards of beauty around the world. 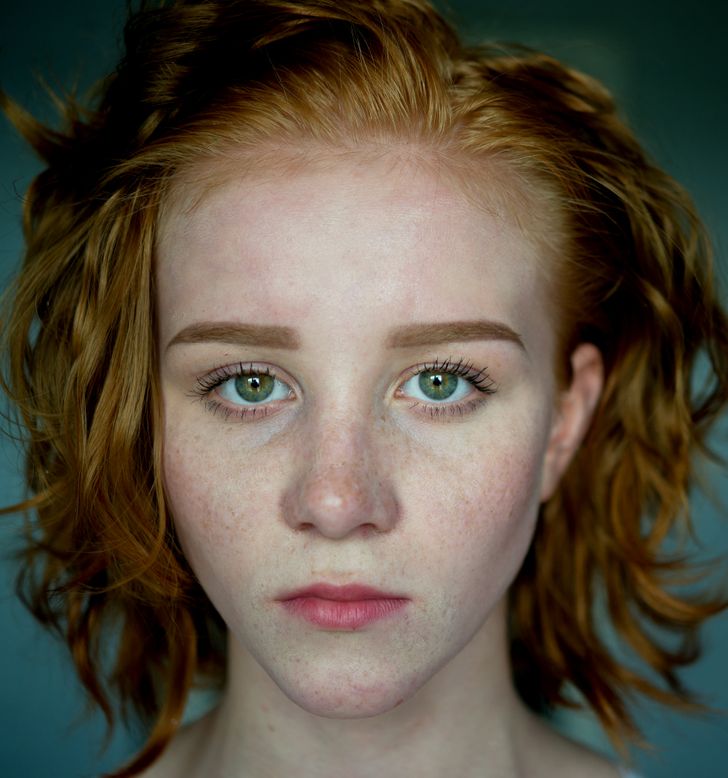 A typical Irish woman usually has thick eyebrows, fair skin, and thin lips. But their most common features are a large forehead, green eyes, lots of freckles, and red hair. As the Irish people always stand for natural beauty, they highly appreciate all these traits in women. 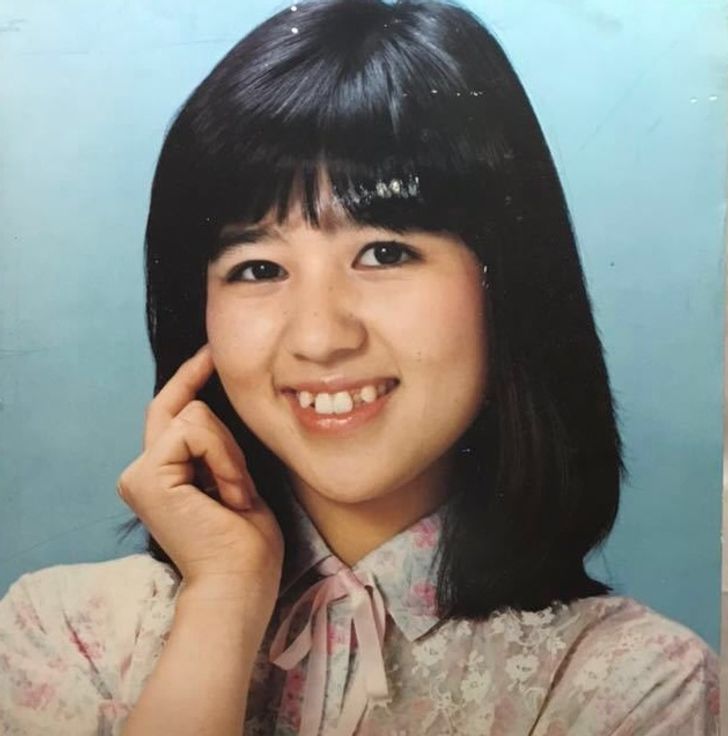 In most Western countries, a perfect smile is usually associated with beauty, but for Japan things work in the opposite way. In this country, young women are heading to dental clinics to make their teeth look crooked and multilayered. This semi-vampire look, or yaeba, is actually considered cute there, as the Japanese believe that it’s a symbol of natural beauty and youth. 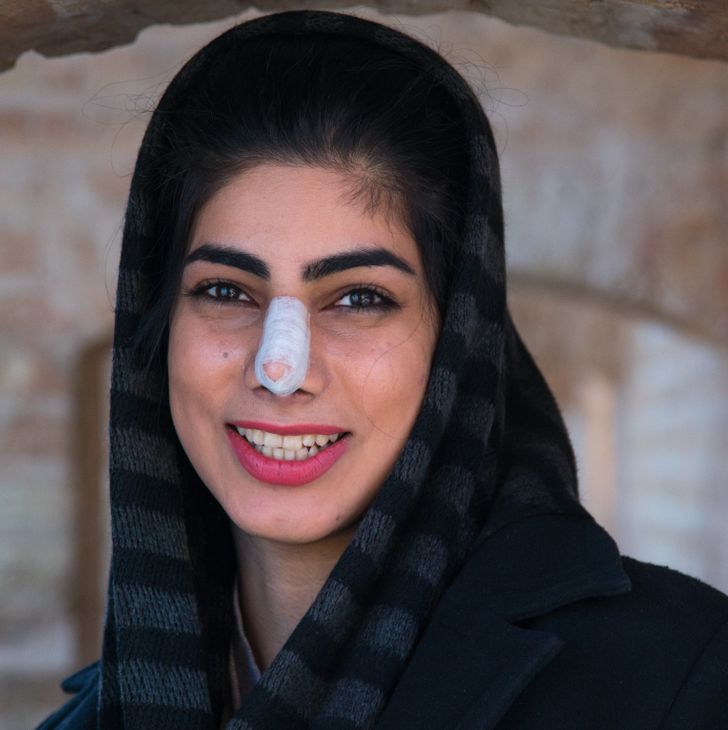 © Eric Lafforgue / Art in All of Us / Contributor / Getty Images

Nose jobs aren’t that uncommon in the United States, but Iran has become the rhinoplasty capital of the world. Women are so proud of going under the knife that they will continue to wear their bandages long after they’re needed, in order to show off their beauty. Still others will purchase surgical tape to wear even if they haven’t undergone the procedure.

Because women’s bodies and hair are covered by a hijab and it makes little sense to spend money on clothes, they are keen to spend their money to enhance what people can see.

“They have become more fashion conscious because they are deprived of it,” author of Reading Lolita in Tehran, Azar Nafisi, told ABC News. “Every woman likes to be happy, likes to be secure, likes to look good, to feel good, and Iranians are no different.” Well said. 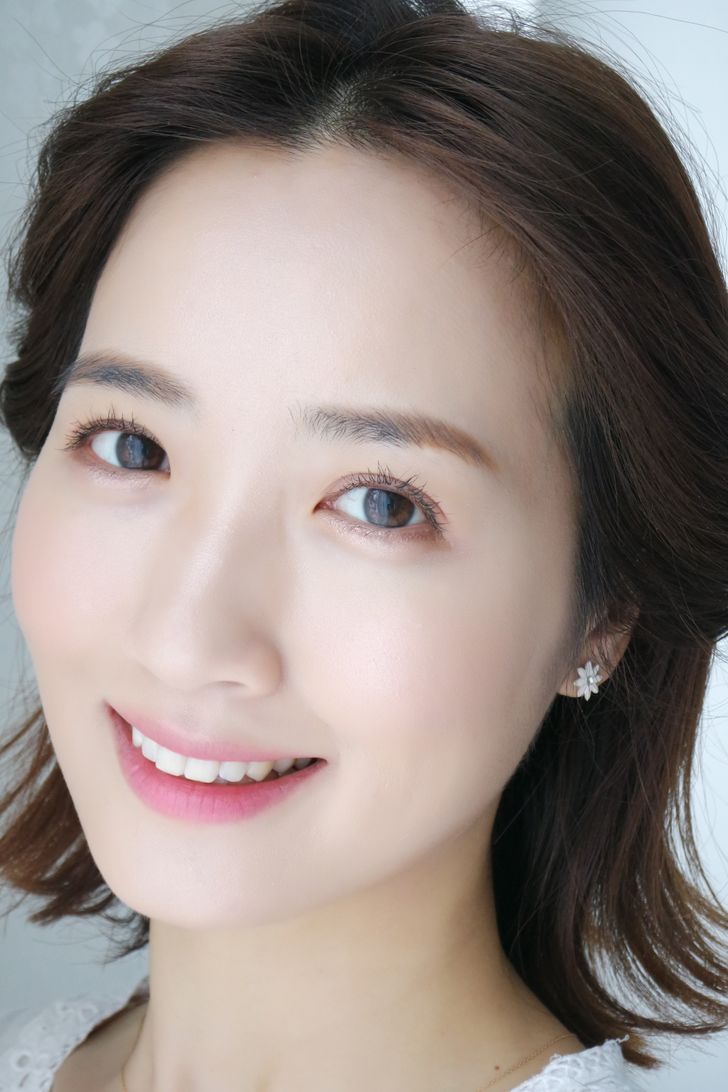 Women in many Asian countries abhor the sun because pale skin is a sign of beauty and desirability. I lived in South Korea for many years, and it was not uncommon to see women walking outside sporting huge “ajumma visors” to keep the sun from hitting their faces. These women also kept their bodies covered from head to toe, even in the hottest of months to keep their skin from tanning.

I came to learn that, historically speaking, if you were tanned, it meant that you were a poor peasant who had to work outdoors. Pale skin, on the other hand, depicted the life of luxury and wealth. Korean women who can afford it will also spend a great deal of money on creams to whiten their skin. In fact, a 2009 report from Global Industry Analysts said skin-lightening was a $10 billion industry worldwide. GIA was projecting that the number would surpass $23 billion by 2020.

I always found it interesting that I felt so much more desirable to men with a tan, while my Korean friends longed for just the opposite. 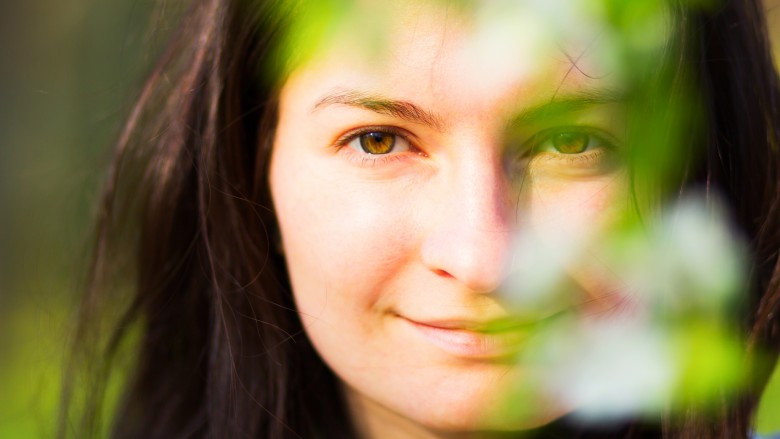 There is nothing more appealing to a French man than the au naturel look that many French women espouse. While many cultures choose heavy makeup, many women in France opt for the natural look, which consists of little to no make-up. Instead, they accentuate their natural beauty with muted and warm tones. “What we want is to be ourselves — not a better version of ourselves,” said French makeup artist Violette in a Vogue interview. “We feel like it’s better to be used to something than to try to change it. So we think: What style can I have with this face, and with this hair?”

To look their best with minimal makeup, French women work hard to keep their skin in great condition with creams and other cosmetics. “French women treat their ‘base’ as best as they can—so we try to have amazing skin, and an amazing body, and amazing hair, so we don’t have to do too much else,” said Violette.

French women sometimes take their au naturel look to the extreme. While less common today, French women also have opted to embrace their natural body hair rather than shave or wax it off like other Western cultures. That’s one beauty secret I won’t be including in my regimen. 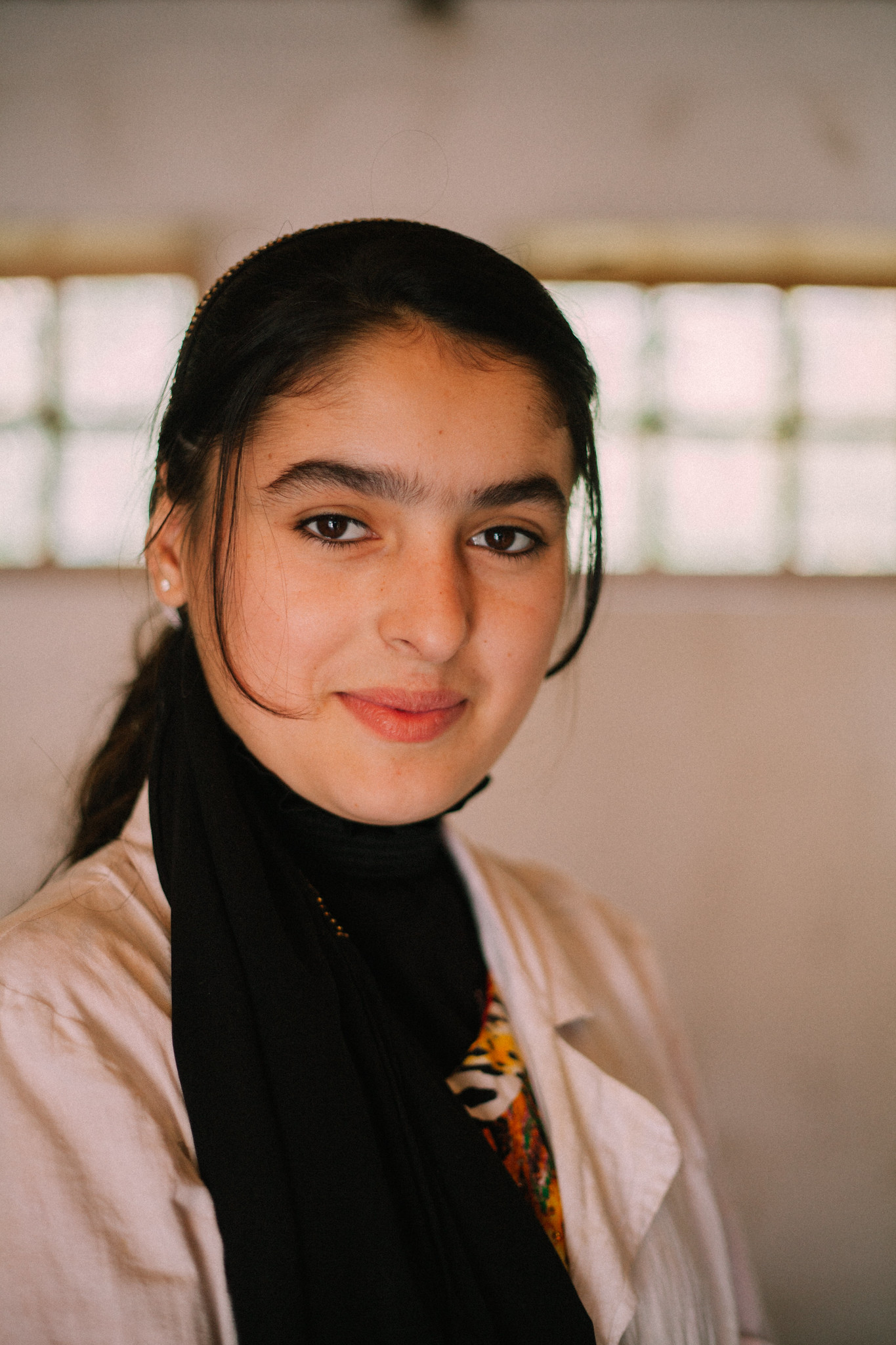 In Tajikistan, bushy eyebrows, that are merged above the bridge of the nose, have long been considered the standard of beauty in women. Some time ago, there was even a common superstition — the closer your eyebrows are to each other, the closer your husband will be to you. Besides that, it’s considered a symbol of purity and innocence in women.

Although today, things are changing, you still can find a lot of Tajik women with a unibrow. And even those who’ve missed out on the unibrow gene try to fake it and use herbs to grow the necessary hairs or draw the brows on themselves to look prettier. 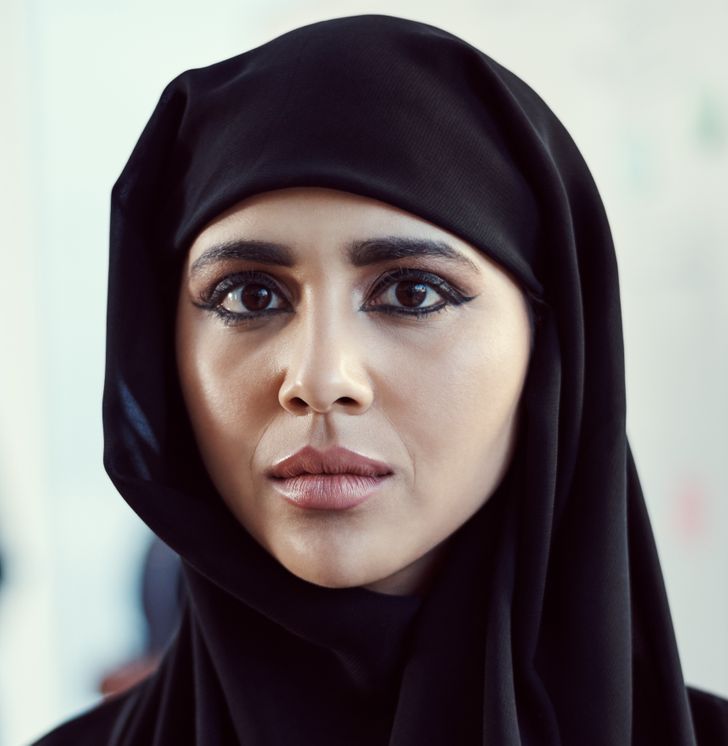 The eyes are the mirror of a person’s soul — Saudi Arabian women give another meaning to this old saying. As they can’t show most of their face, because of their religion, they usually pay close attention to the beauty of their eyes. To make them more attractive, they use all kinds of makeup and tools and spend huge amounts of money on them. 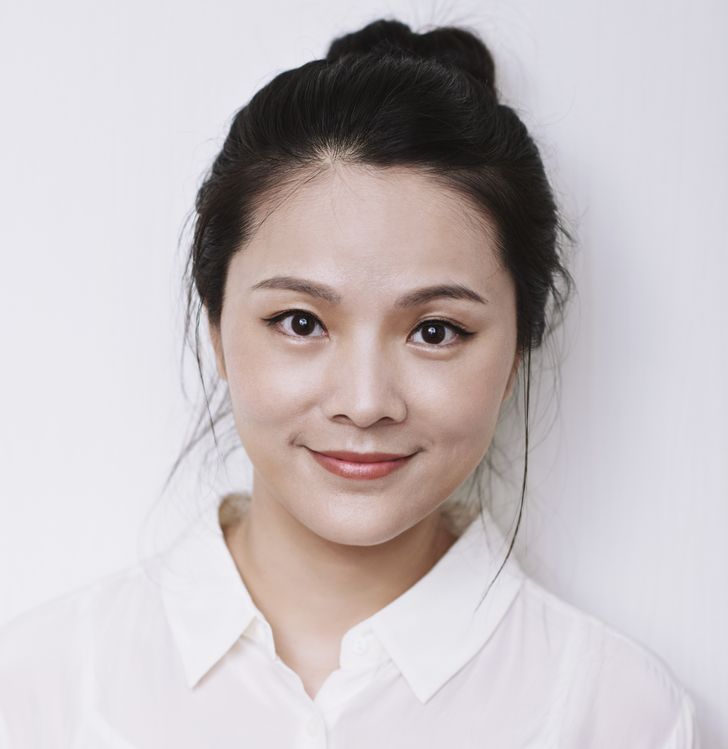 For Chinese women, pale skin is considered a true beauty standard. This trend actually goes back to the past when the color of the skin was related to the social class a person belonged to. If the skin was dark, it meant that the person worked in the fields and was poor. Chinese girls don’t want to look poor, even today, so they’re ready to do anything to keep their skin as white as snow.

This addiction to a pale face goes far beyond just avoiding sunlight. To get rid of “black skin,” women in China also use all kinds of face creams that usually contain whitening agents. 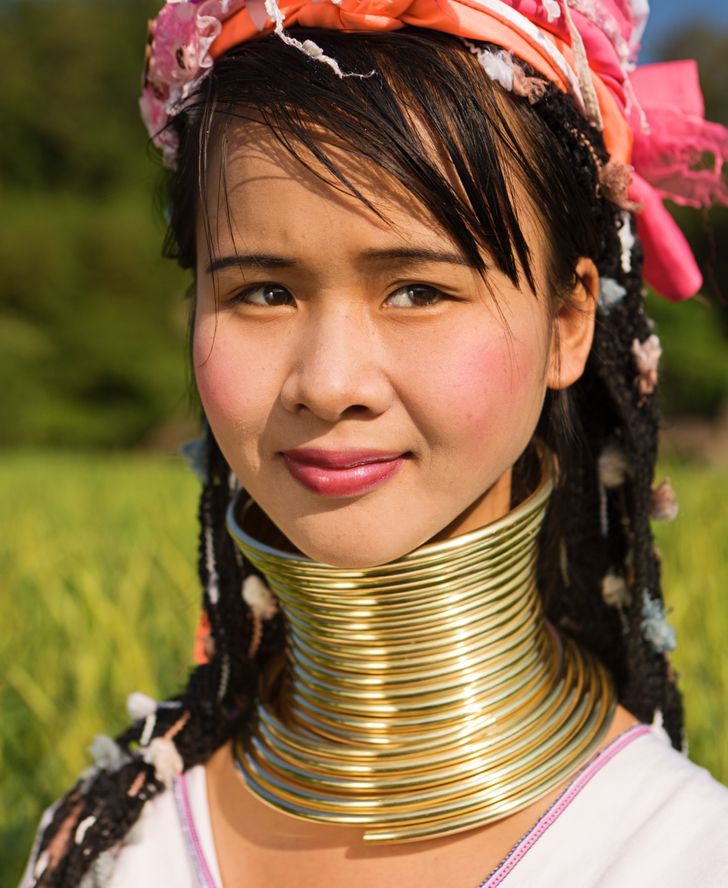 We’ve all seen images of the Karen women in parts of Myanmar and Thailand who wear heavy, brass rings around their neck. The group of people known as the “long-neck” or “giraffe” tribe is really a sub-group of the Padaung. The seemingly odd practice makes a woman more attractive to a possible mate because it is a sign of beauty and wealth.

Although it may appear to many Westerners that it must be torture for a woman to undergo the lengthening of her neck, this is really just a myth. In fact, the brass rings create a visual illusion, making the woman’s neck simply appear longer. “The weight of the rings pushes down the collar bone, as well as the upper ribs, to such an angle that the collar bone actually appears to be a part of the neck,” notes the website.

Kayan long neck women begin wearing the rings by the age of four or five, with more rings added as they become accustomed to the weight. These rings can weigh up to 25 pounds. 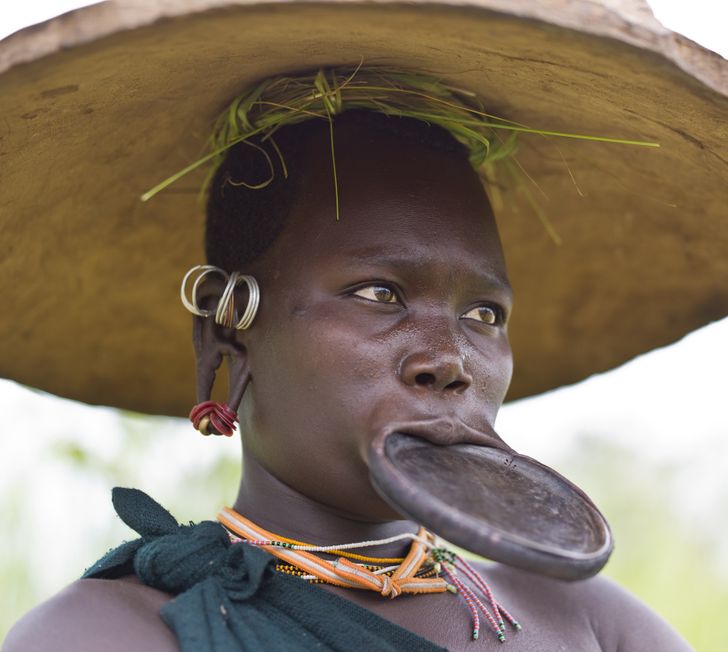 Many Americans may consider a lip plate a form of body mutilation, but to a Mursi or Suri woman in Ethiopia, it denotes female maturity, signaling that she has reached child-bearing age.

The process includes the removal of the two lower front teeth before a piercing is made to allow a heavy clay or wooden disk to adorn and stretch the lower lip. Like ear stretching, larger and larger disks are inserted over time to further elongate the lip. The larger the disk becomes, the greater the beauty, as it signifies maturity, which is an attractive attribute to a male of the tribe.

The practice is also found in parts of South America. 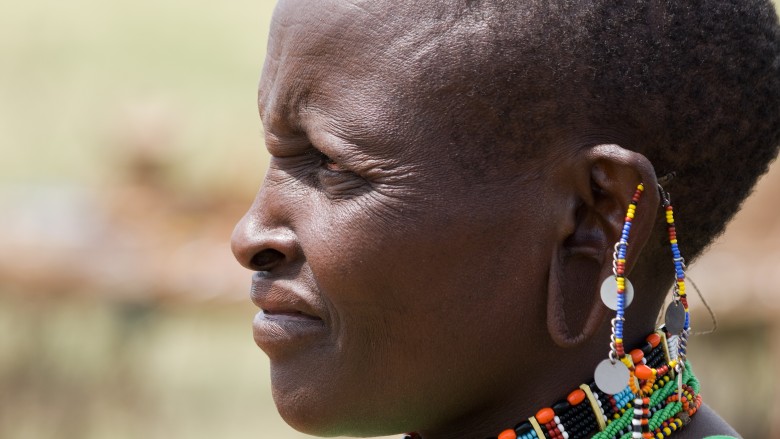 Members of the Masai tribe in Africa are known for their practice of wearing heavy jewelry made of stones or elephant tusks to stretch their earlobes over time.

As time goes by, a woman’s status in the Masai tribe, as well as other tribes in Africa, is heightened by how large and elongated her earlobes have become. To draw attention to their elongated earlobes, Masai women will adorn them with brightly colored beads and jewelry to attract attention to their impressive size. 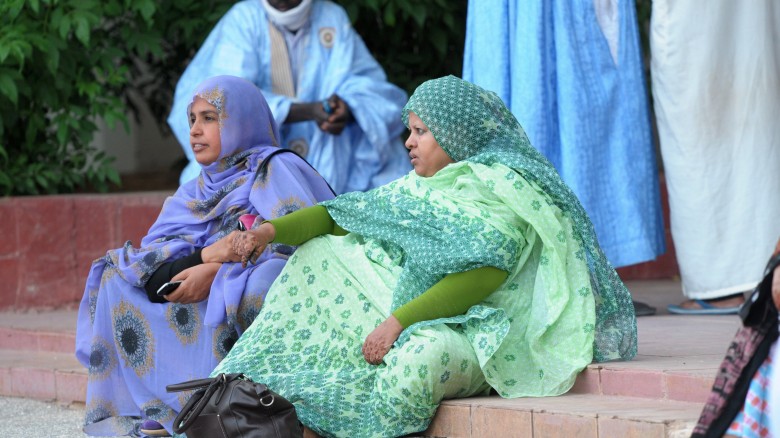 In the African country of Mauritania, drought and famine is common, so being overweight has traditionally been a sign of prosperity.

A heavier woman has been so desirable that girls as young as seven were sent to fat farms and urged to eat in order to put on weight. The BBC News reported some of these girls at fat-farms could end up weighing between 130 to 220 pounds. Thankfully, this practice is beginning to go by the wayside.

“That’s not how people think now,” said Leila — a woman who had been fattened as a child. “Traditionally, a fat wife was a symbol of wealth. Now we’ve got another vision, another criteria for beauty. Young people in Mauritania today, we’re not interested in being fat as a symbol of beauty. Today to be beautiful is to be natural, just to eat normally.” 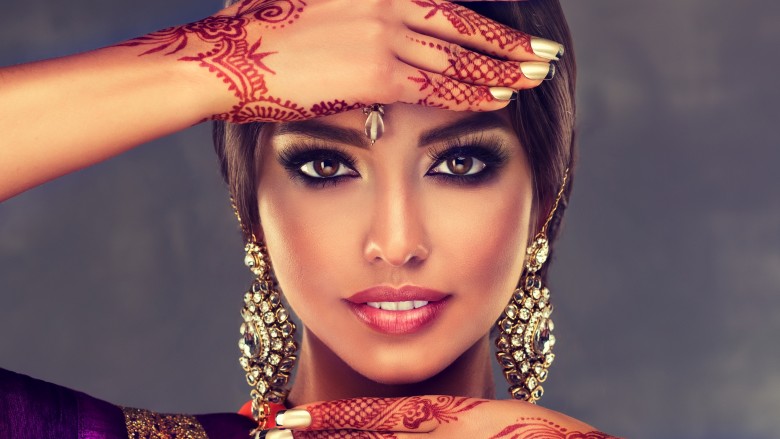 Women in India adorn nose rings, bindis and henna to make themselves more attractive, especially on important occasions such as weddings or festivals. Cosmetic company L’Oréal notes that the Indian culture has always considered beauty an expression of godliness and something to be revered. Like many other countries, women seek lighter skin and will spend a great deal of money for skin-lightening creams.

“While eyeliner, jeweled and dyed bindis, and henna-stained hands and feet have defined beauty for centuries, Bollywood presents another facet of Indian beauty where color, shimmer and gloss are the order of the day,” says L’Oréal. “Despite the size of the country and its regional diversity, this Bollywood-reinforced pan-Indian ideal of beauty is based on very specific criteria: fair skin, a silhouette with feminine curves, big expressive eyes, and long, dark, shiny hair.” 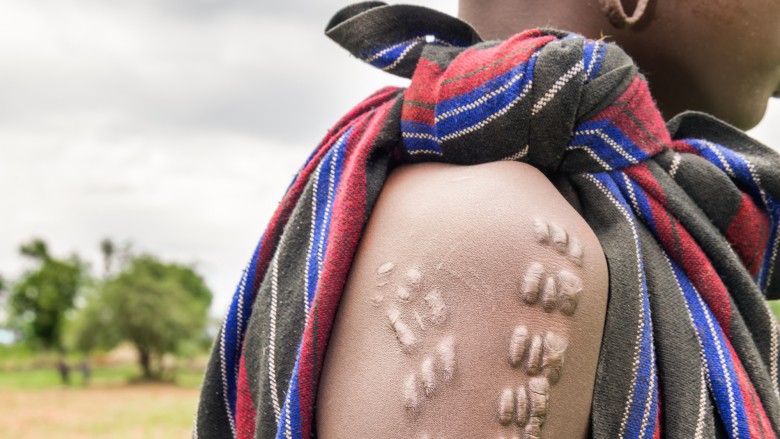 Scarification is a popular tradition throughout the world and in many different cultures from the Western Pacific to South America to parts of Africa. In many of these cultures, both men and women undergo the painful process of scarification, but women tend to scar their torsos and chest because it is considered sensual and intriguing.

Like the tattoos of the Māori tribe in New Zealand, the scars can send a message about the woman’s social status, political or religious roles, and her genealogy.

“Most importantly, [it’s done for] personal beauty, since in many cases, the scars are used to mark stages in a young girls life, her transformation from childhood to adulthood,” says Wake-Ramos. “Finally, when her scars are finished, she is allowed to marry — and to men, women with fashionable scars are more sexually appealing and attractive. Therefore, likely to bear more children. In the terms of our society, they think those scars are hot.”