People Are Sharing Their Massive Newfoundlands Dogs And They’re Amazing

Newfoundlands are a dog breed, which is known for its massive size and large coats. Nonetheless, behind those massive looks, hides a gentle giant. Out of the large dog breeds, Newfoundlands top the chart as the 5th largest in the world standing at between 27-30 inches tall and weighing as much as 150 pounds.

Add to their height the thick double coat that covers them, they give you the impression of having a bear as a pet. The breed, as the name suggests, comes from the Canadian island of Newfoundland. Fisherman in the area needed dogs who could aid them on board and with their natural ability to swim due to their partially webbed feet, Newfoundlands were an ideal choice.

The dogs kept warm by their fur and were strong enough to save a grown man from drowning. And although, as you’ll see in the list below, a little extra space was needed for them in the house, it is all worth it because of their warmth, chubby presence. 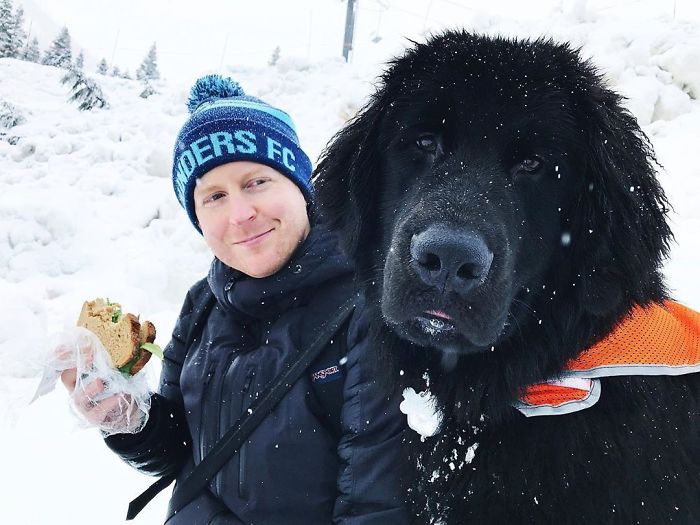 Newfoundlands all over history. In 1802 Lewis and Clark brought along a Newfoundland named Seaman for their 8,000-mile trek across America. He earned his place on the expedition as a hunter and guard dog and even saved their lives against a rogue buffalo. 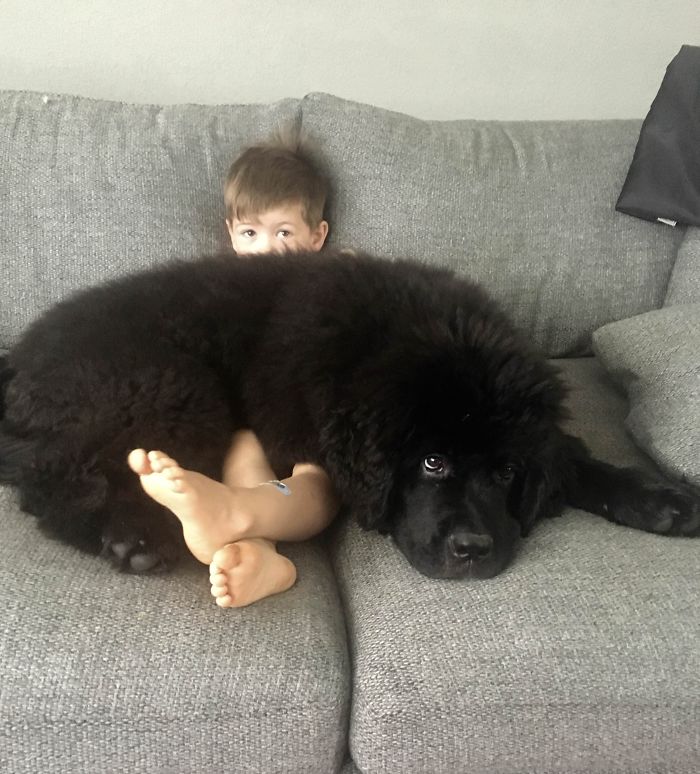 While they are now well-known for their survival and rescue skills, they have also been able to adapt to help in the home. Their sweet and tender nature with children has even earned them the title of the “nanny dog.” For example, a Newfoundland named Brumus was documented to have been the “nanny dog” for Senator Robert F. Kennedy and his wife’s 11 children – just like in Peter Pan.

Even sweet domestic Newfoundlands need to romp and play. They have an enormous lung capacity, which helps with water rescue but also means they might wear you out before they even begin to get tired.

3# Just A Newfoundland Taking His Pony For A Walk 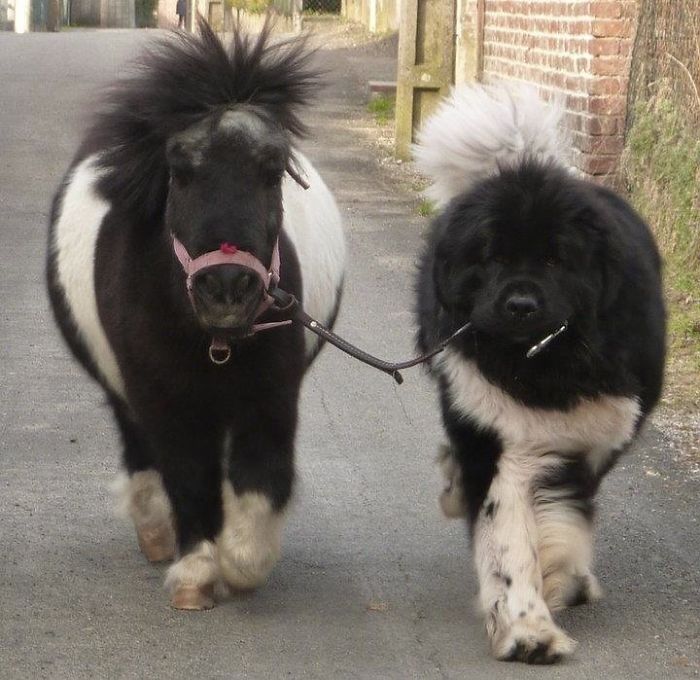 If you plan to get a Newfoundland it’s important to do your research before and prepare your home for lots and lots of drool. As very athletic dogs with a large coat, this is how they keep cool.

4#This Is A Newfoundland Dog. Not A Bear 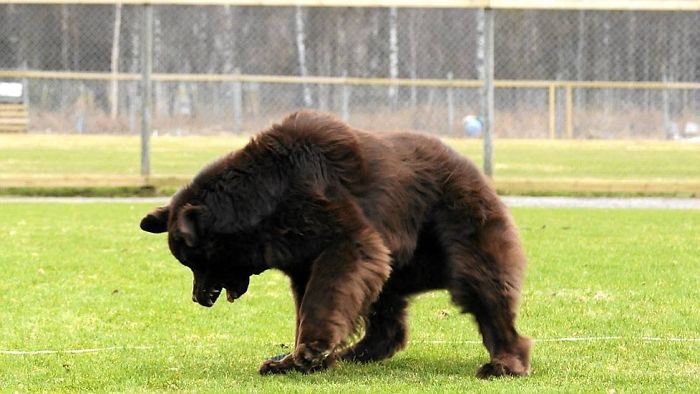 In their first year of life, Newfoundlands gain 100 pounds, which means lots and lots of dog food. Luckily their metabolism slows after that as well as how many calories they need.

Grooming is another important aspect of caretaking for Newfoundland. Their huge waterproof coat sheds frequently and must be brushed regularly. In addition to the hygiene aspect, your dog should be taken for regular nail trims to prevent the feet from splaying under their enormous weight.

5# I Love It When My Newfie Meets A Smaller Dog 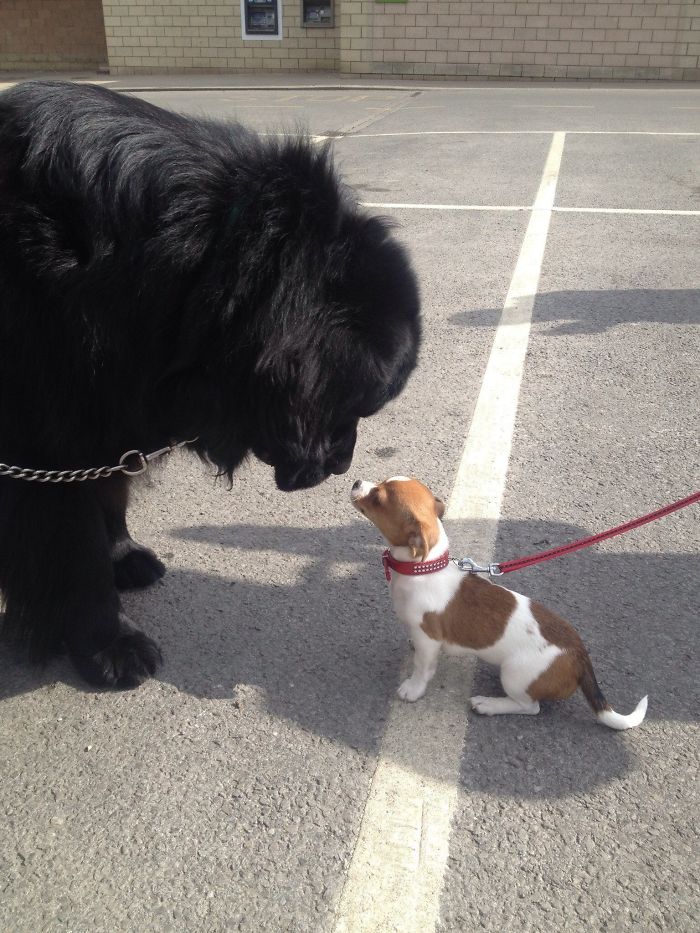 Newfoundlands can be found everywhere, but they thrive best in cool climates with wide-open spaces. Dog owners who live in warmer climates must keep their Newfies near air conditioners or in the water when it is especially hot to prevent heatstroke.

These silly, curious dogs are one of the smartest dog breeds. Their brains mixed with their unique swimming abilities are why Newfoundlands are still used as rescue dogs and lifeguards.

6# Thought A Bear Broke In. Nope, Just A Newfie 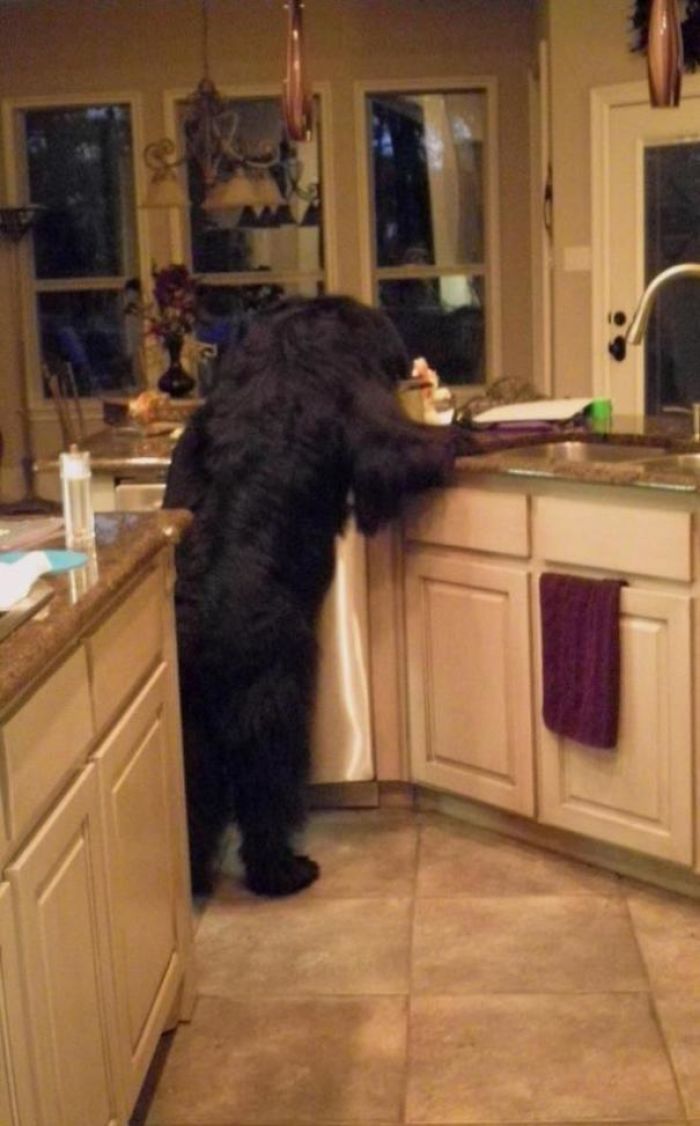 As appealing and sweet as they are,  many Newfoundlands find themselves in need or adopting or fostering because their original owners’ weren’t prepared for the amount of care that goes into raising a dog this large That’s why you do your research before making such decision.

7# I Heard It Is Tongue Out Tuesday 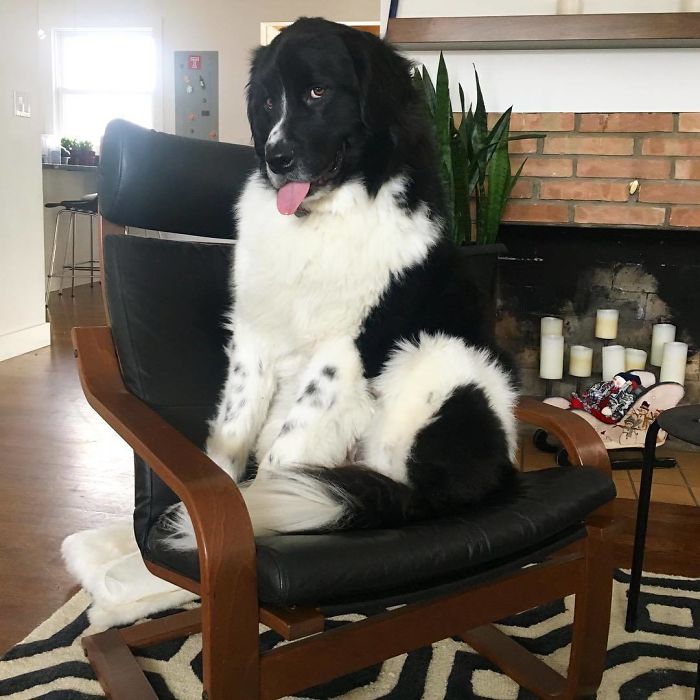 8# Ollie Likes To Come To Tennis Practice And Help Out 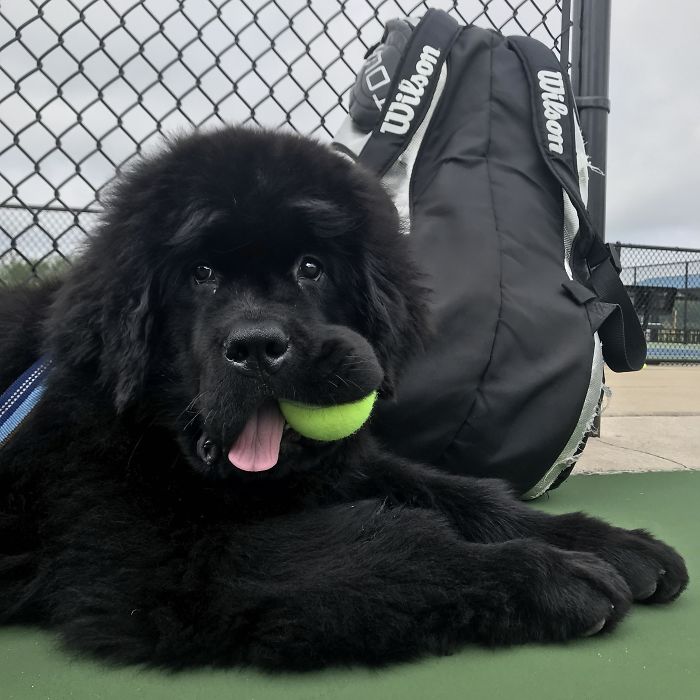 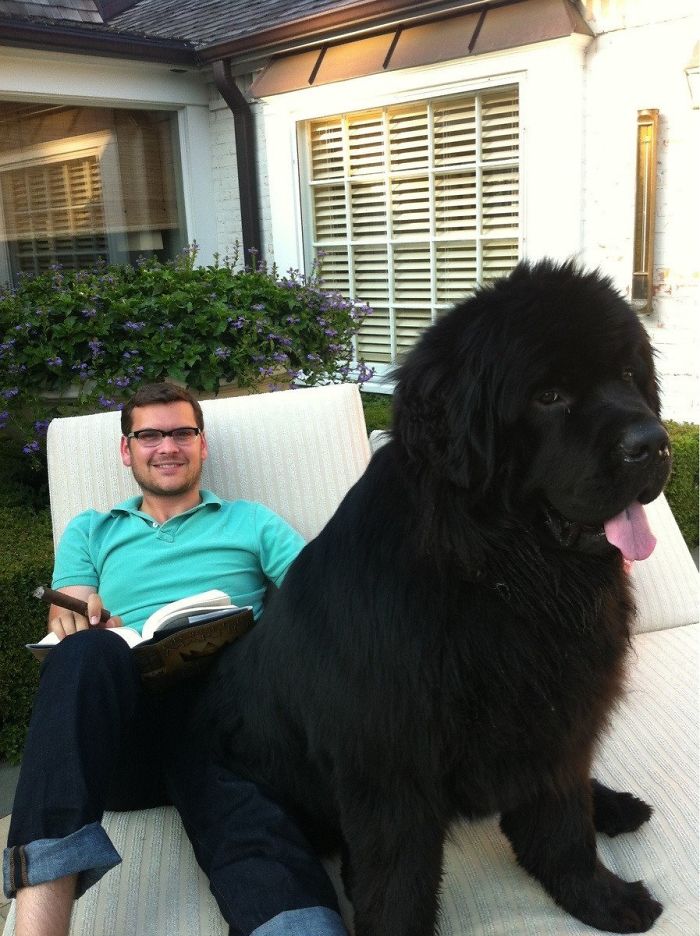 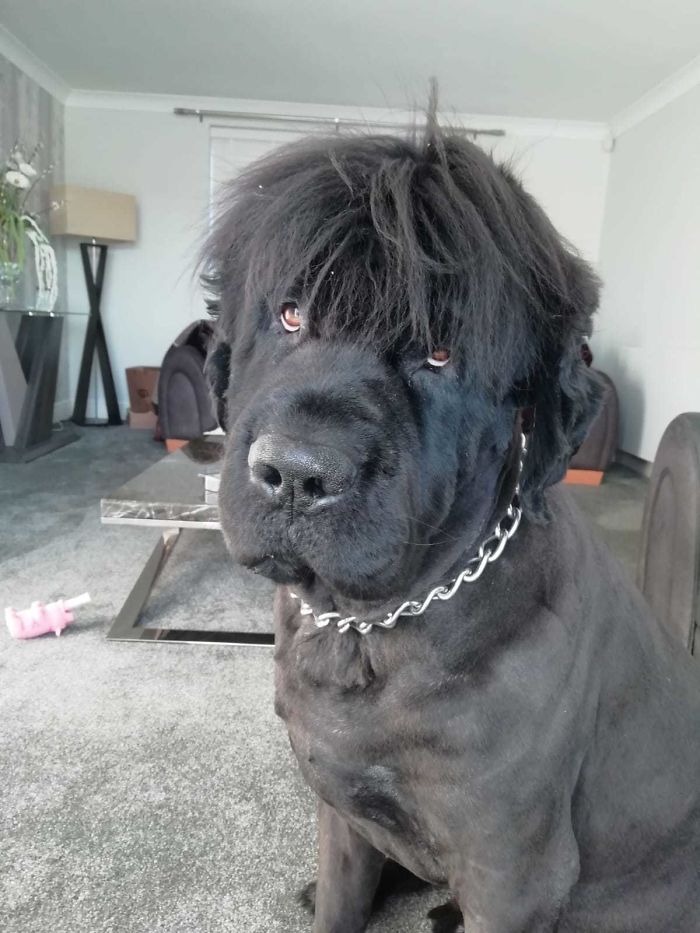 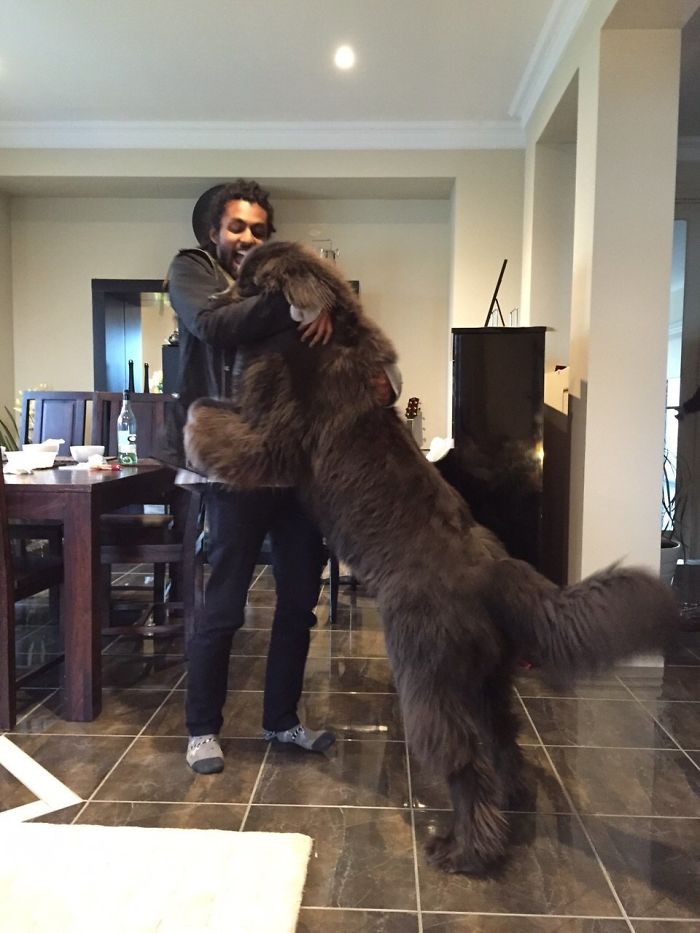 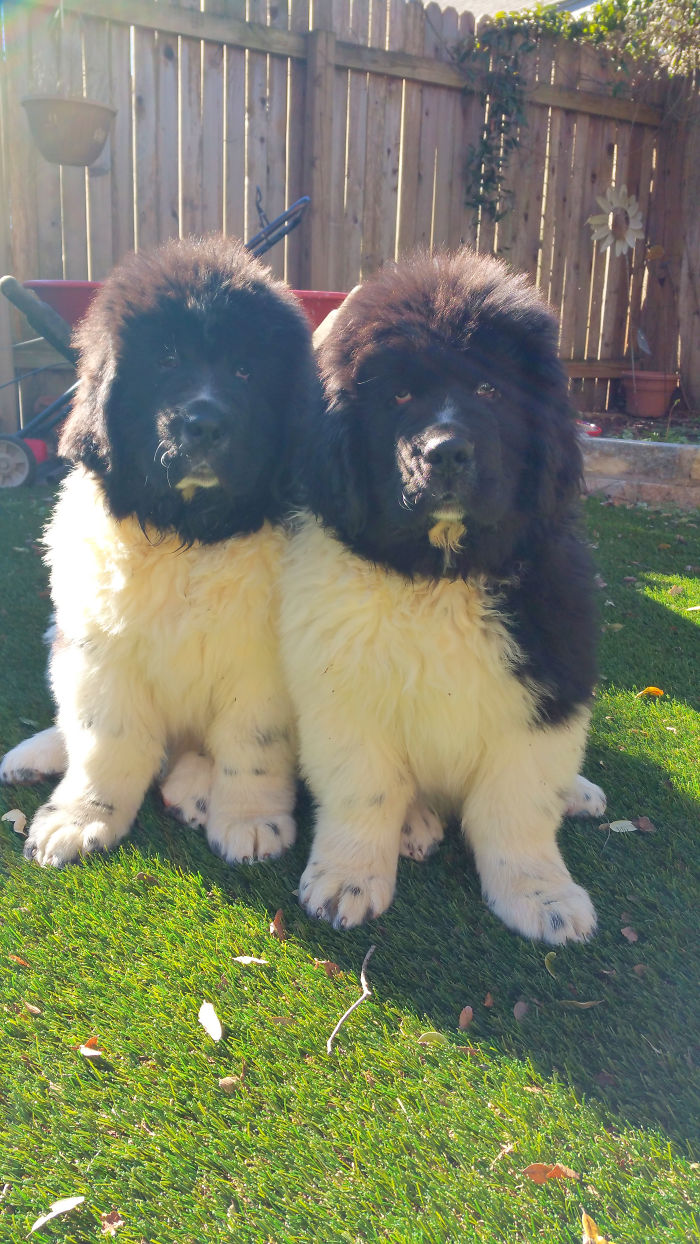 13# Tryna Live That Lap Dog Life! Dad May Be Smiling But On The Inside, He’s Saying ‘Please Help Me, My Ribs Are Getting Crushed’ 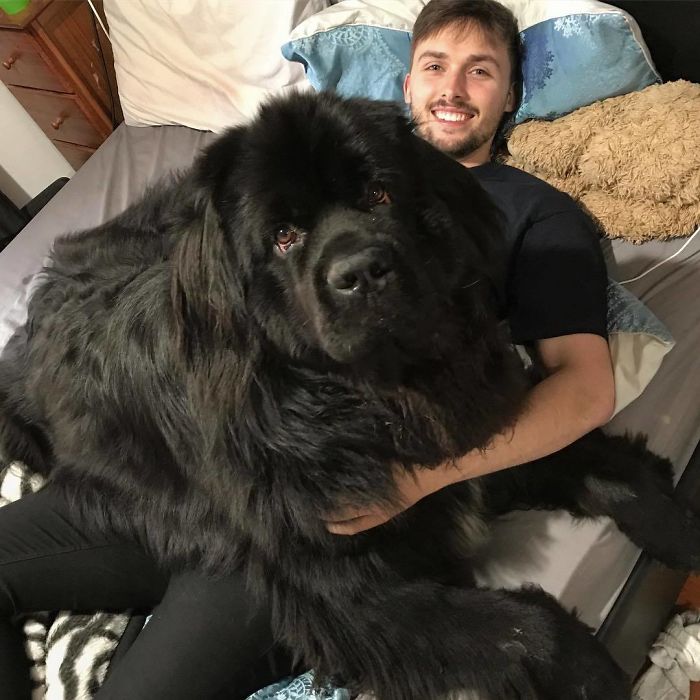 14# This Is Beyond A Head Tilt 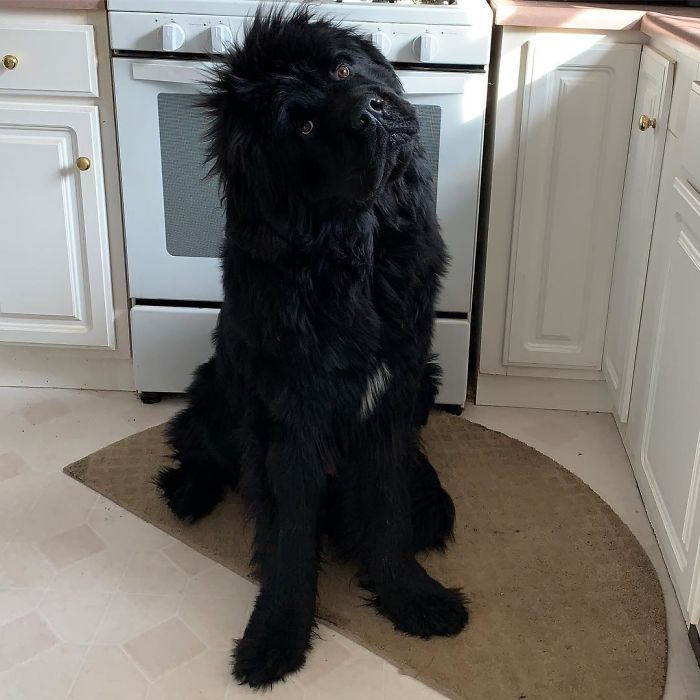 15# Laying Down With My Newfie 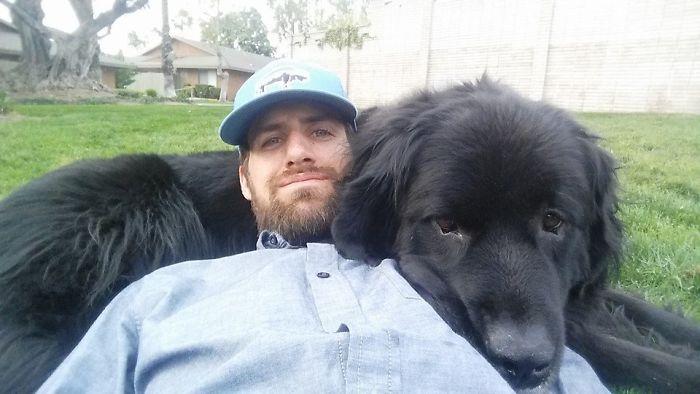 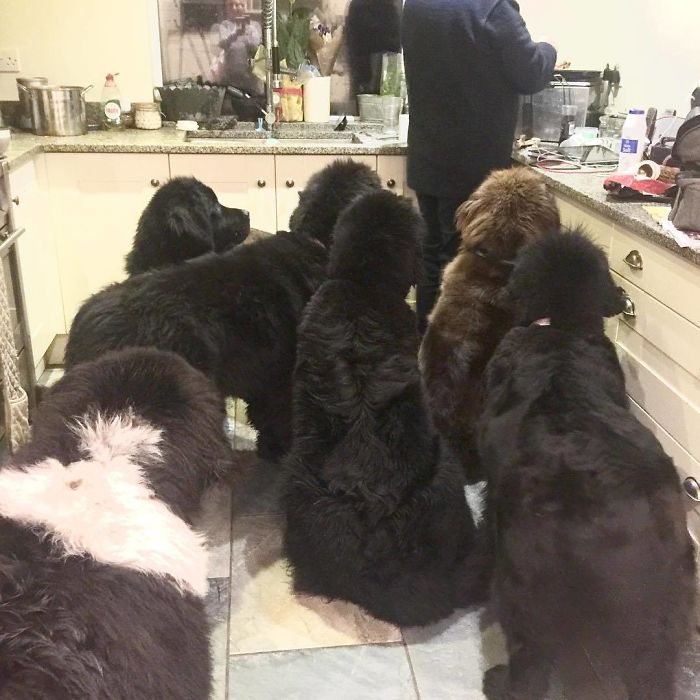 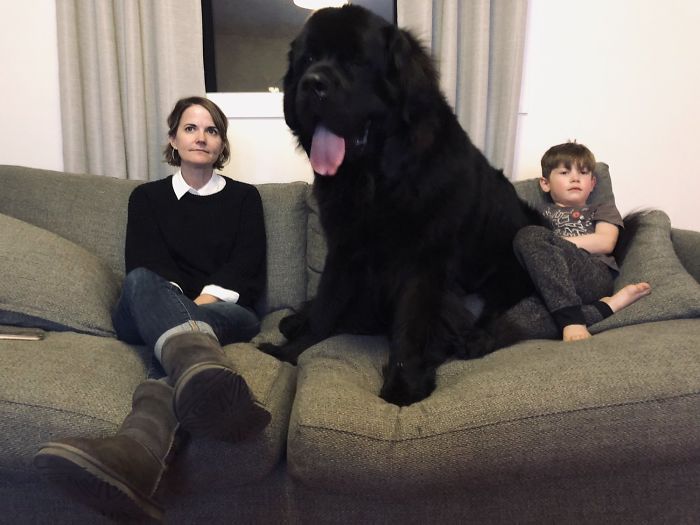 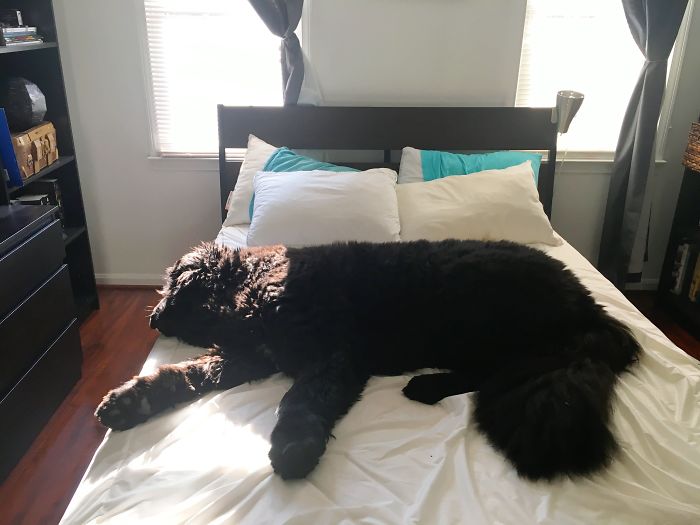 19# Ready For A Roadtrip 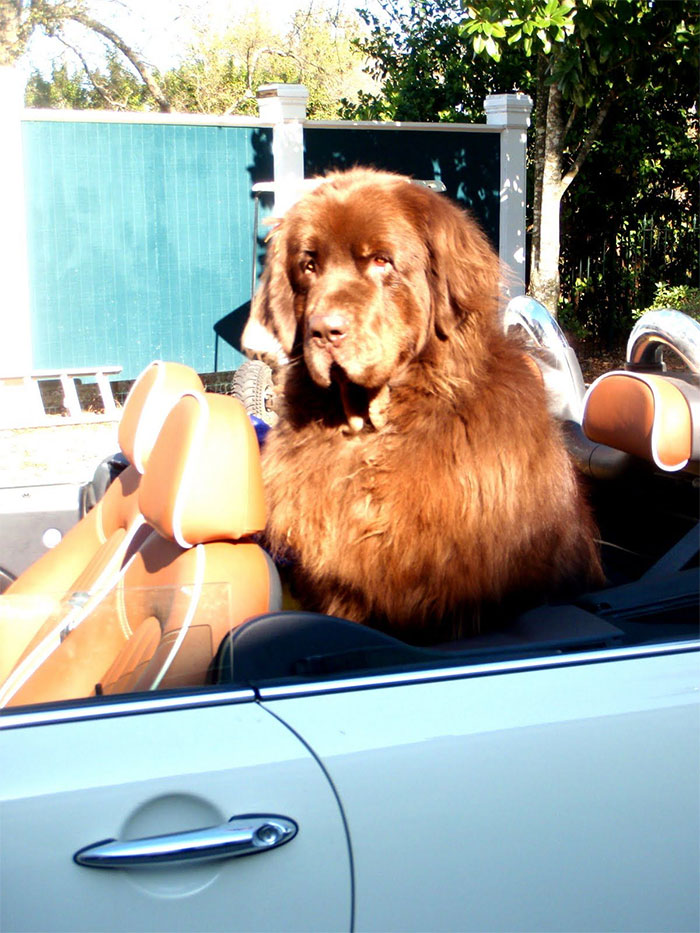 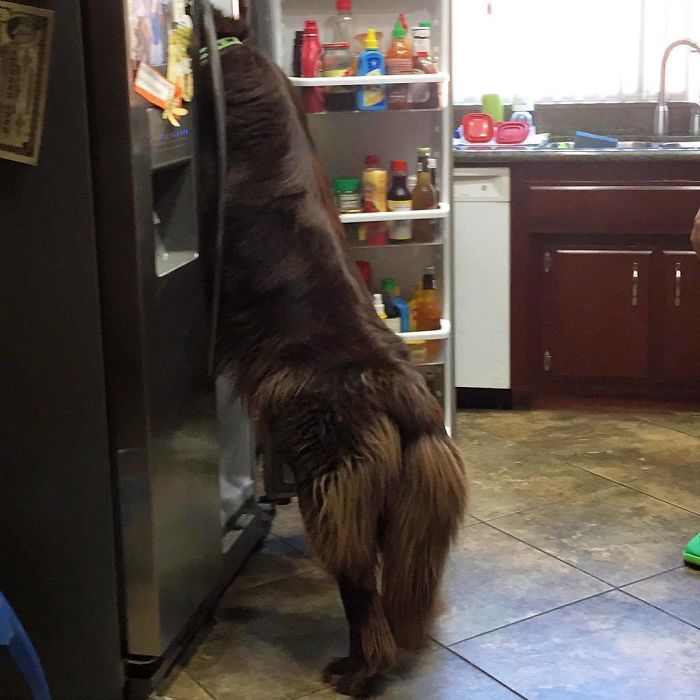