Super Dad Builds His Son A Hand With 3D Printer, And Now Makes Them For Other Kids For Free

Imagine what it would be like being born without a hand. When we think of taking things for granted, we often don’t even consider our limbs.

But, for Carter Campos, it was a reality. He was born with a congenital below-the-elbow amputation and his parents knew it at the 12-week sonogram.

This affectionate father, Michael Campos, has a son who was born missing one hand. The dad made his boy an awesome prosthetic hand inspired by superheroes. Now he makes artificial hands for other would-be superheroes across the country! 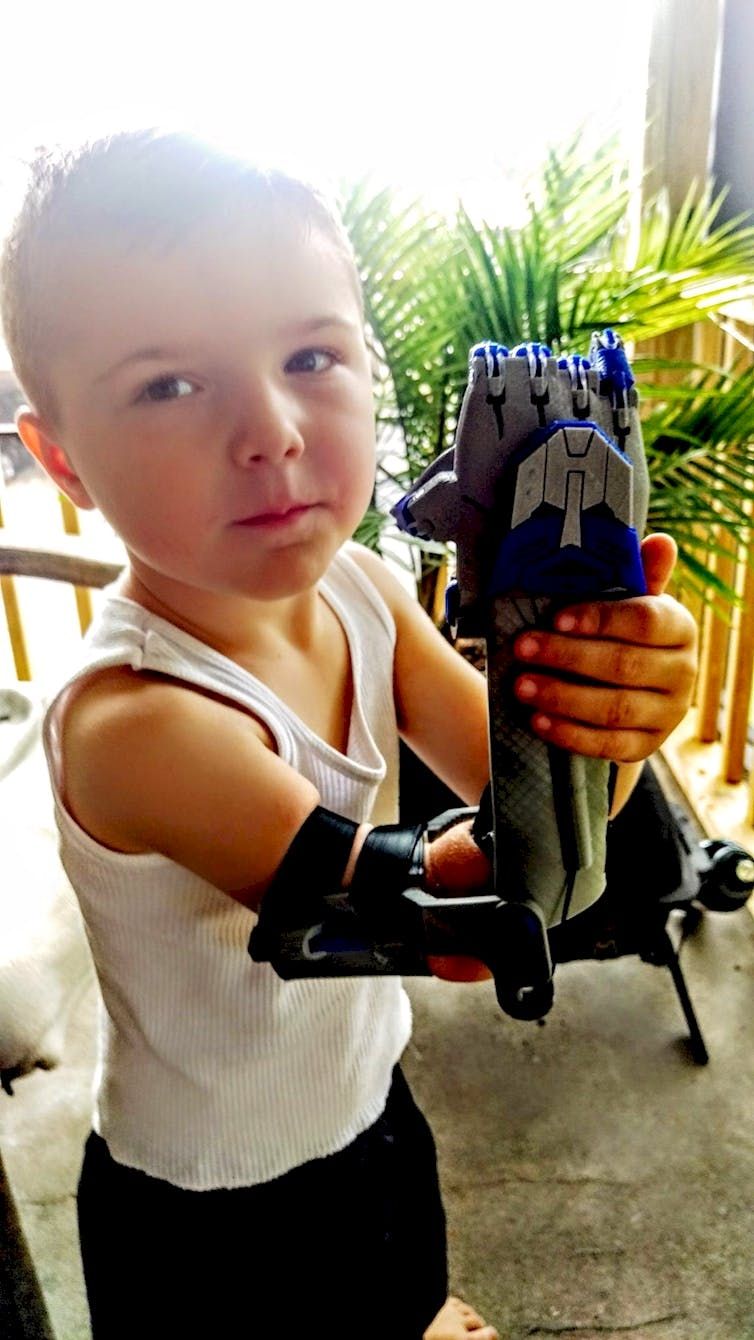 Michael Campos, 33, learned to create light-weight prosthetics after his son, Carter, 4, who was born with below elbow congenital amputation, asked for a new hand.

In 2016, with the help of a volunteer group, Michael produced a prosthetic 3D printed for Carter that cost only $10 to build.

Since then the doting dad has made hands inspired by Iron Man and Captain America, while his latest creation has a fidget spinner attached. 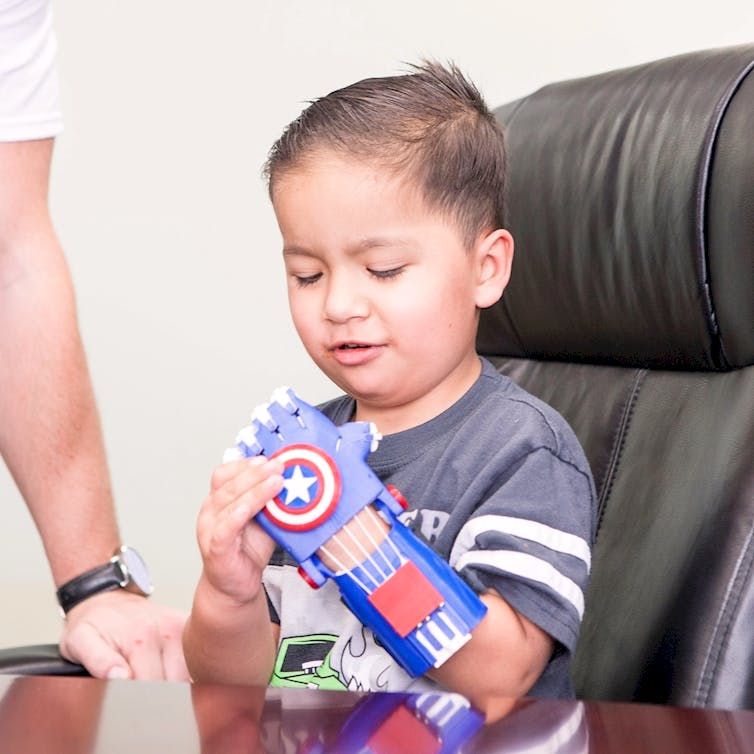 Now the father-son duo work together for their company ‘Claws from Carter’ producing free hands for kids across the US and UK.

Michael from Lake Forest in California, USA, said: “Last year, when Carter asked me ‘Daddy will you build me a hand’, I felt so helpless not being able to do it at the time and promised him that one day I’d be able to make one. 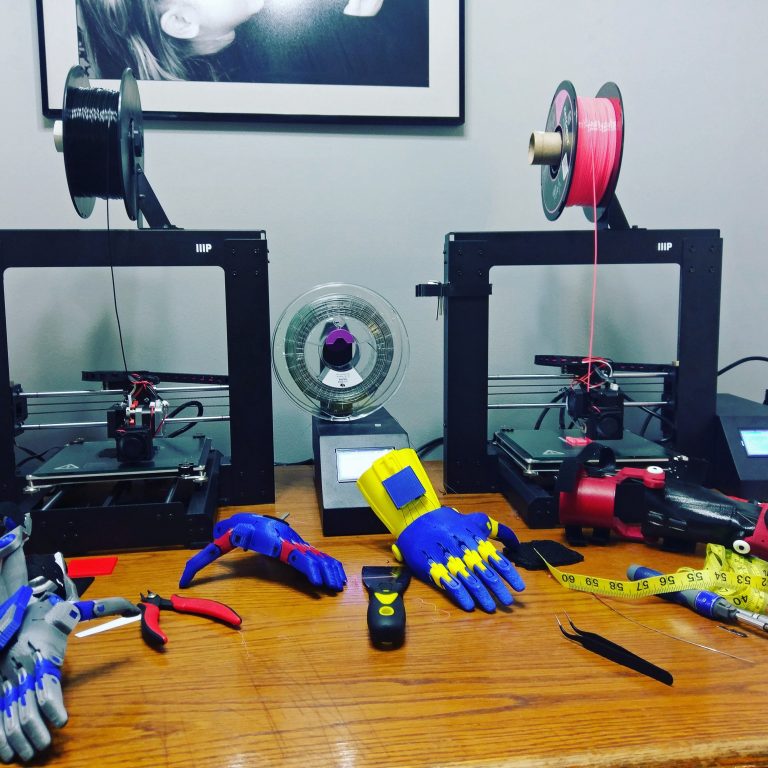 “Within a month, I built Carter his second arm and from then onwards we have been building like crazy for other kids all over the US and even sent one to the UK.”

“No words can describe the feeling of being able to fulfill his request, it was extremely satisfying and the skill has changed my life.”

“Now whenever Carter comes to visit me, he always checks the printers because he wants to help with assembling, knowing the themes, where they are going, and to know the kids too.”

“He’s really thrilled by it all and often sits on my lap, where we can put the pieces together, as well as meeting other kids like him.” 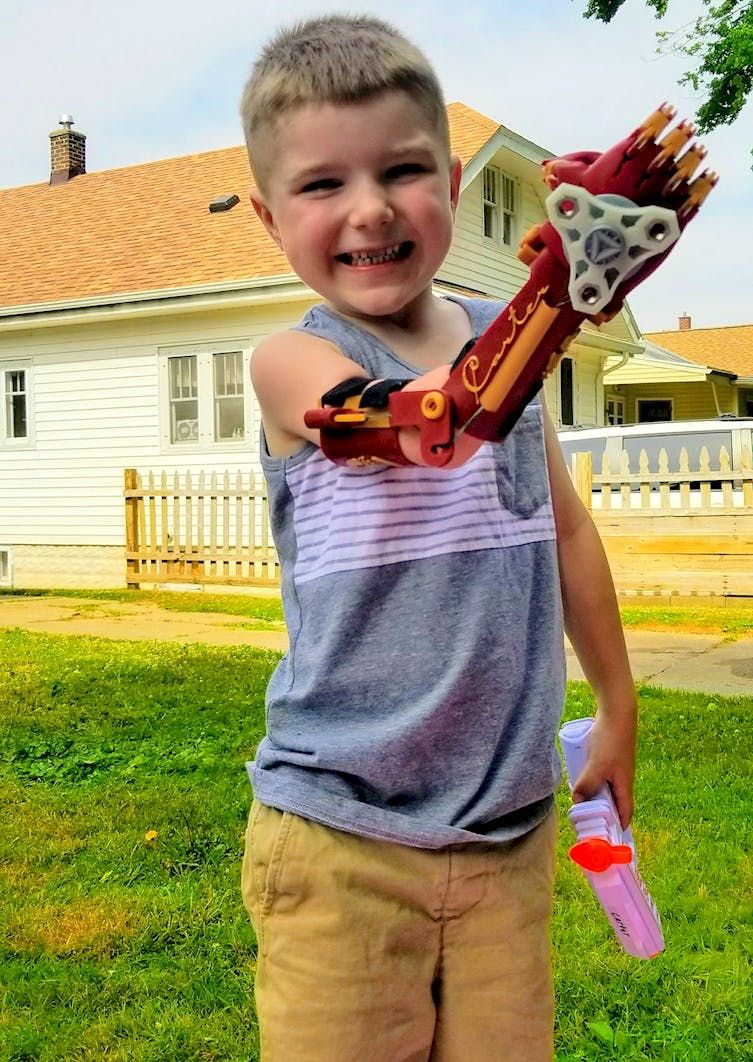 “This is all for Carter, if it wasn’t for him, I’d be oblivious to limb differences, to 3D printing, and the help we’ve been able to provide to other families out there.”

Michael discovered e-NABLE, a volunteer group who create free schematics for the designs and after producing an adaptor to help Carter learn to ride a bike, the doting dad starts making more elaborate designs.

Michael added: “He wanted an Iron Man hand. I spent hours printing at a slow speed to give it the right gloss and shine, I made it glow in the dark, attached a fidget spinner, and put Carter on the side. He absolutely loved it, seeing the smile on his face was an unforgettable moment.” 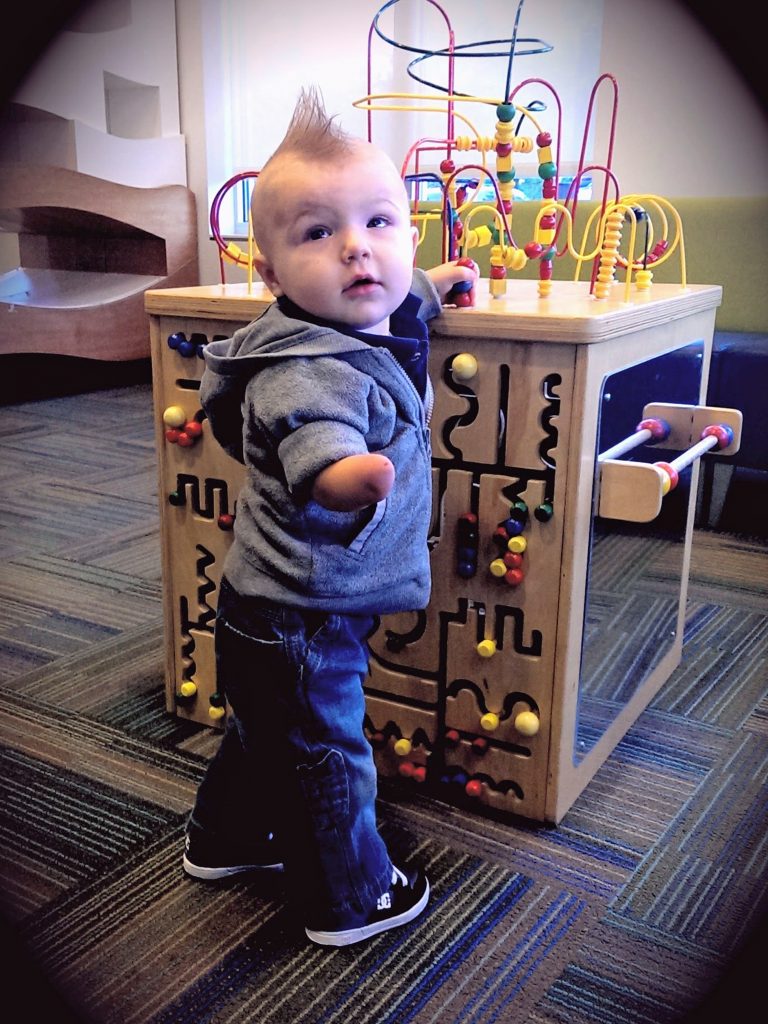 However, Carter has overcome all problems presented to him by his limb difference, learning his own unique adaptations around everyday obstacles.

Michael said: “From watching him hold a bottle for the first time, to crawling and hitting all milestones on time I realized nothing was going to stop him.”

“In some ways, it was hard watching him struggle at first while learning to perform a task, but once he figured it out, it was such a great moment and a massive achievement for him. But once he was born we realized this kid is resilient and can do anything he puts his mind to.” 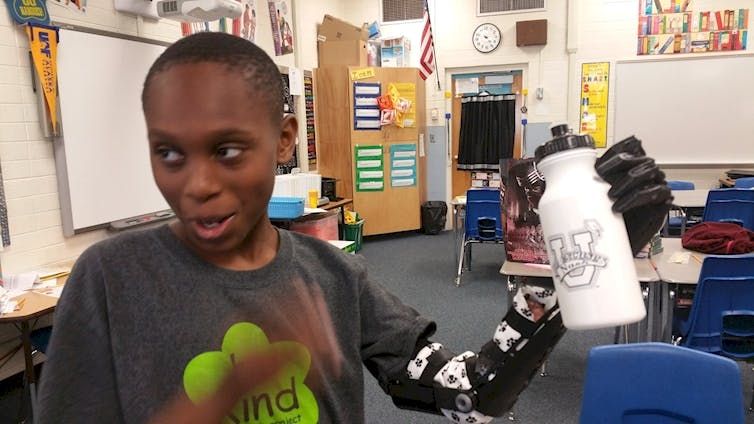 “Carter is so determined, he’s learned everything his own way, from crawling, holding a bottle to buttoning his jeans, zipping-up his jacket all without assistance. I’m extremely proud of Carter, he has taught me so much about life, he never complains about his difficulties and is such a strong-willed boy.”

Since learning how to 3D print hands at home, Michael and Carter have been producing a range of designs for other children. Michael hopes to continue growing Claws from Carter as well as encouraging others to build 3D hands for other kids with limb differences too.

He added: “Everything I’m doing is in my son’s name, I do it for him, I hope that someday he will take it over when he is a little older. I believed what happened to my son was all for a reason, Carter was born to enlighten me and to contribute to the world by making these hands.”

“Carter is learning to do something kind for other people without expecting anything in return, he’s learning to live selflessly which is one of the most important things I can teach him.”

For more information visit here or to donate to their fund visit here. 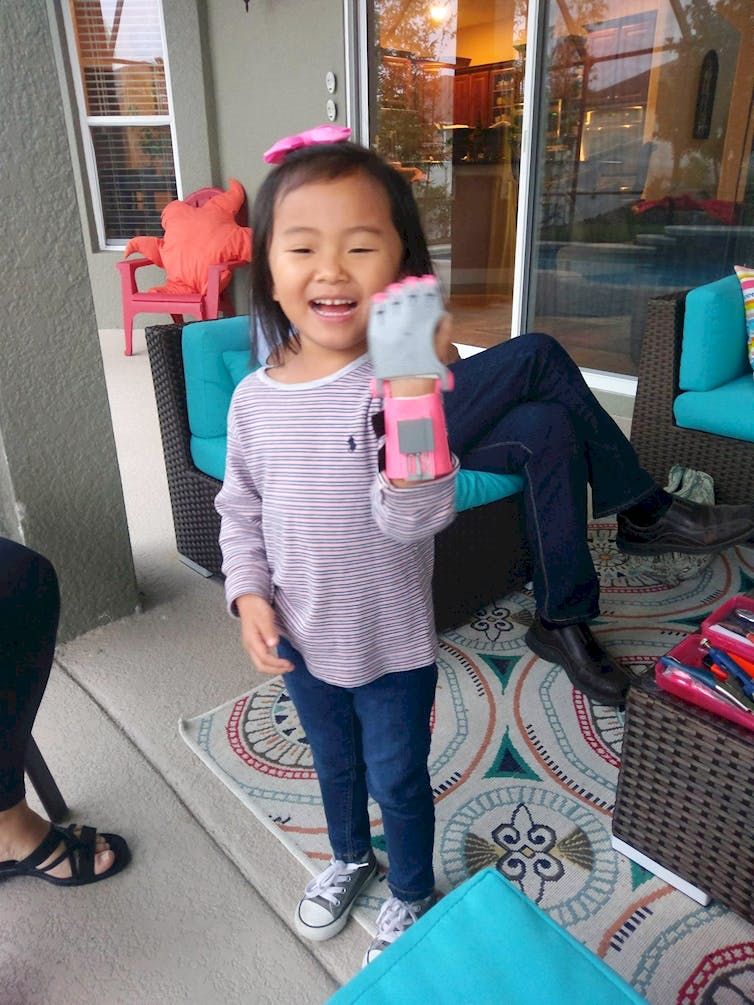 Michael was taught how to 3D print by e-NABLE a movement and volunteer project that helps people produce prosthetics for those in need.

Jen Owen, an e-NABLE community volunteer, said: “They jumped right into the whirlwind of requests for e-NABLE devices from their fellow limb different community families. Not only were they making them their own arms and hands, but they were spending the extra time to create fun themed designs for the children whom they were gifting them to – from Star Wars to Flowers, from Pokemon to sports teams. Michael and Carter are exactly what we hoped would happen and a model that we hope to see continue to spread as e-NABLE continues to grow.”

Since starting in 2011, e-NABLE has delivered up to 3000 free printed hands and arms for recipients in 80 countries. As well as engaging 1500 schools in school projects to help produce the prosthetics too.

Jen added: “e-NABLE is a movement, it is proof that if you share your ideas freely with others and work together to teach and support each other in making things that create a positive impact in the world – amazing things can happen.

To get involved or for more info visit here.