Imagine building a monument so large, that after SEVEN decades it still wasn’t complete. Sounds crazy right? Well, Crazy Horse that is! The Crazy Horse Memorial in the Black Hills of South Dakota has been under construction for the past 70 years, and while it’s open to tourists, the 87-foot-tall monument is still a long way off from being finished.

In September, the New Yorker took a look at the lengthy sculpting process and controversies around the monument. Some say the project’s construction has become more about sculptor Korczak Ziolkowski and his family, who have devoted their lives to the sculpture, rather than focusing on the Native Americans it’s meant to honor.

Ziolkowski spent his life working on the granite, but he did not live to even see the finished face. “Go slowly, so you do it right,” he told his second wife. He thought it would take 30 years. It’s now been 71 years, and it’s far from finished.

Keep reading to see what the sculpture is like so far, and why finishing it is taking so long.

In 1948, work began on a sculpture in South Dakota to honor Native American warrior Crazy Horse 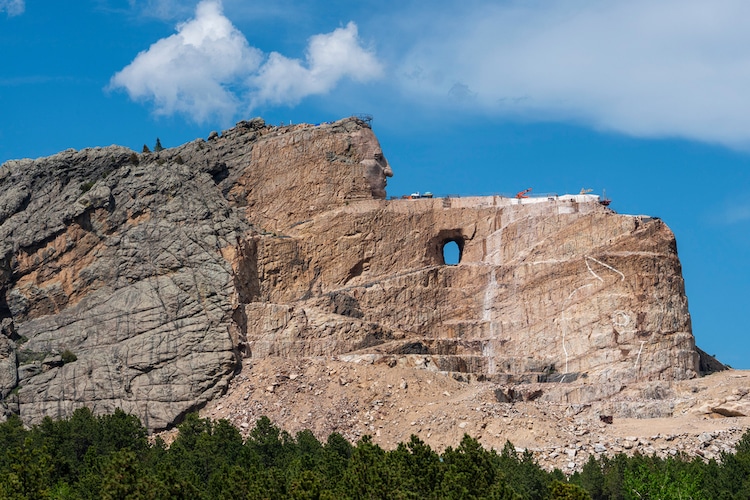 The Crazy Horse Memorial in the Black Hills of South Dakota has been under construction since 1948.  Although it’s open as a site for tourists to visit and it does feature a completed, 87-foot-tall head of Crazy Horse, it’s far from finished.

A few factors explain why, wrote Martin Rand III for CNN in 2012, when the monument had been under construction for a paltry 64 years. For one thing, the harsh weather of South Dakota and the iron-heavy rock of the mountain that is becoming the monument have made construction technically challenging. For another, the Crazy Horse Memorial Foundation is a non-profit that’s funded by admission fees and donations. 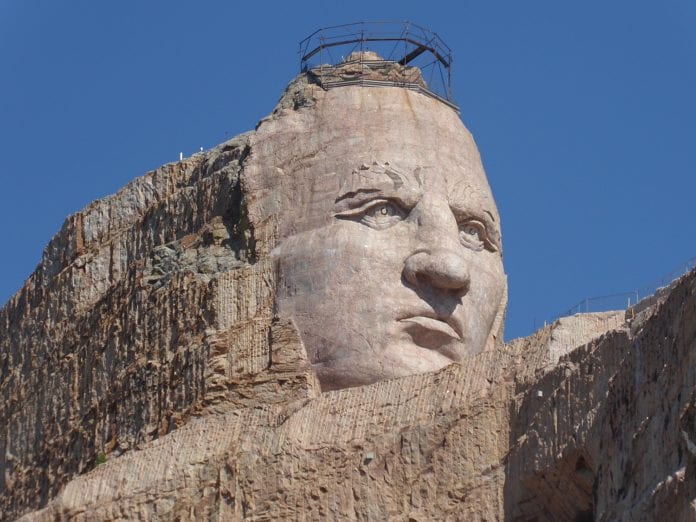 Crazy Horse Memorial is a symbol of American Indians’ heritage and heroes. In addition to the world’s largest mountain carving, it offers an excellent Indian Museum of North America, visits to sculptor Korczak Ziolkowski’s home and studio © Karen Rubin/goingplacesfarandnear.com

The foundation, and the site, are overseen by the family of sculptor Korczak Ziolkowski. Ziolkowski designed the monument—his life’s work—and he is buried there, writes CBS News. True to his decisions on the project, the foundation has not sought federal funding.

According to NPR, this monument is the largest being carved anywhere in the world. In fact, writes contributor Charles Michael Ray, “when finished, [it] will dwarf the four presidents” of Mount Rushmore. According to the memorial website, Ziolkowski designed a 563-foot-tall mountain carving that shows a mounted Crazy Horse with his arm extended. That’s still the plan, although some alterations have been made to accommodate the mountain’s natural shape and composition. 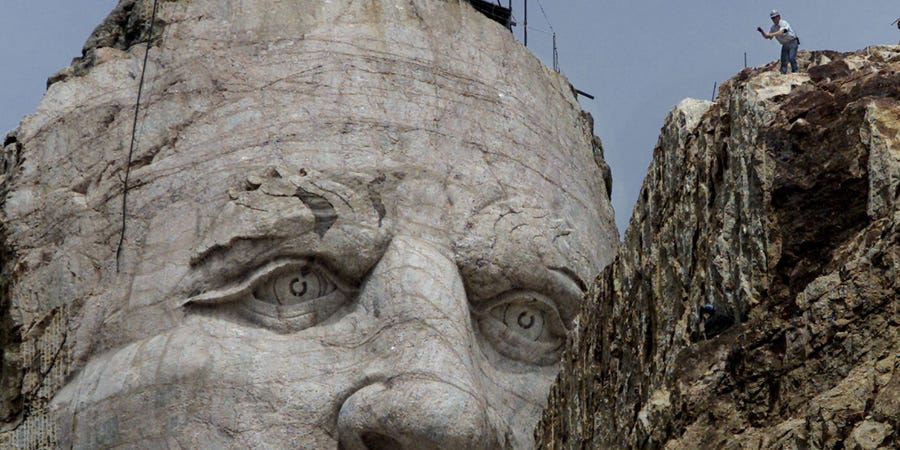 Not all of Crazy Horse’s descendants agree with the memorial

Ziolkowski was asked to design and execute the monument by Henry Standing Bear, who at the time was the chief of the Lakota. In 1939, when Standing Bear commissioned the sculpture, Mount Rushmore was almost complete.

In South Dakota’s Black Hills region, 5,000 square miles of mountains and Penderosa pines, is the unfinished outline of the world’s largest statue 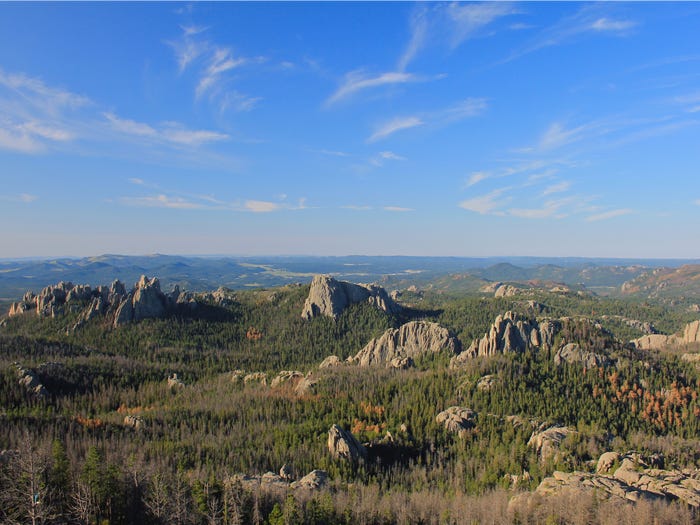 The leader wanted to create a Native American counterpart to the monument. However, writes Indian Country Today, the modern descendants of Crazy Horse don’t think that Standing Bear had the right:

Elaine Quiver, a descendant of Crazy Horse, told Voice of America in 2003 that Lakota culture requires consensus among family members, but nobody asked his descendants.

“They don’t respect our culture because we didn’t give permission for someone to carve the sacred Black Hills where our burial grounds are,” Quiver told Voice of America. “They were there for us to enjoy and they were there for us to pray. But it wasn’t meant to be carved into images, which is very wrong for all of us. The more I think about it, the more it’s a desecration of our Indian culture. Not just Crazy Horse, but all of us.”

The memorial’s future is an open question. Although the face in the mountain certainly isn’t going anywhere, it remains to be seen whether it will ever be joined by a body.

Over the last 70 years the granite mountain, once called Thunderhead Mountain, has been shaped by dynamite and bulldozers. It’s slowly taken shape, but it’s far from finished. 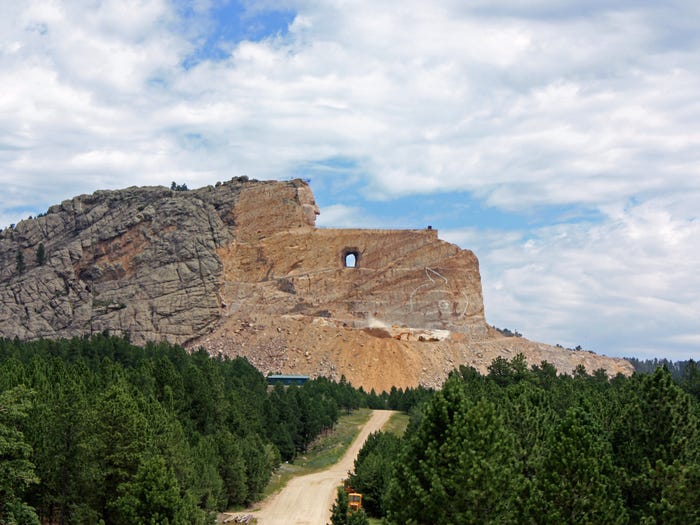 View of the Crazy Horse Memorial in 2010, still showing some outlines of the finished monument, which Korczak painted at the beginning of the work in 1951 –Wikimedia – Source: CNN

Who Was Crazy Horse?

Oglala Lakota aka “Crazy Horse” was born in 1849 and is known for being a famous war leader. Crazy Horse is famous for being one of the leaders in a victory against the US army in the Battle of Little Bighorn in 1876. He’s also known for his humility, and some people have questioned whether he would have liked having a replica the size of a mountain.

During this time, the Native Americans were being forced from their land and killed. Many tribes fought back, which triggered the wars. Crazy Horse would see visions of the future that he would relay to Chief Sitting Bull. Sadly, Crazy Horse would not live to see his dreams become a reality.

The memorial is based on eye-witness accounts of a Native American called Crazy Horse. 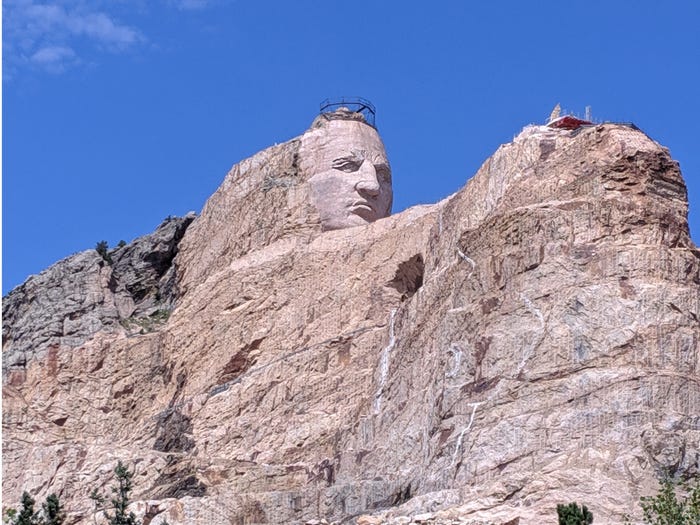 “The Red Nation shall rise again, and it shall be a blessing for a sick world. A world filled with broken promises, selfishness, and separations. A world longing for light again. I see a time of seven generations when all the colors of mankind will gather under the sacred Tree of Life and the whole Earth will become one circle again.”

There aren’t any photos of Crazy Horse, so the sculpture is a symbolic portrait. 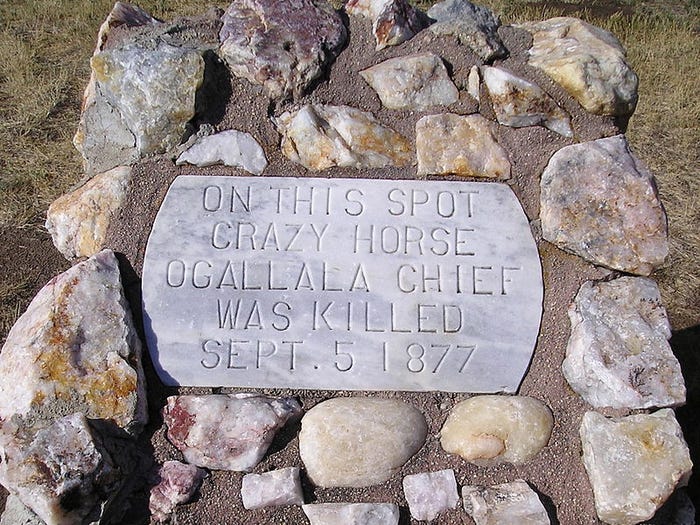 Known for his wisdom and mission of peace between all people who shared the land in the United States, Crazy Horse’s legacy continues to be an inspiring piece of history. So, it makes sense that he would be honored with a monument that would be a symbol of all the great work he did during his lifetime. Unfortunately, the people who planned it bit off more than they could chew and after all this time it still sits unfinished. Some estimate it could still take another 100 years to complete.

Located only 40-miles from the memorial’s location is where Crazy Horse was born. A member of the Oglala Lakota tribe, they were one of the seven tribes of the Sioux Nation. During the 1800’s white trappers and hunters began to expose the tribe to their ways. This would eventually lead to the federal government dividing their land. Some resisted, others surrendered. It was a very confusing and hurtful time for the tribe.

Here is a model of the planned sculpture: 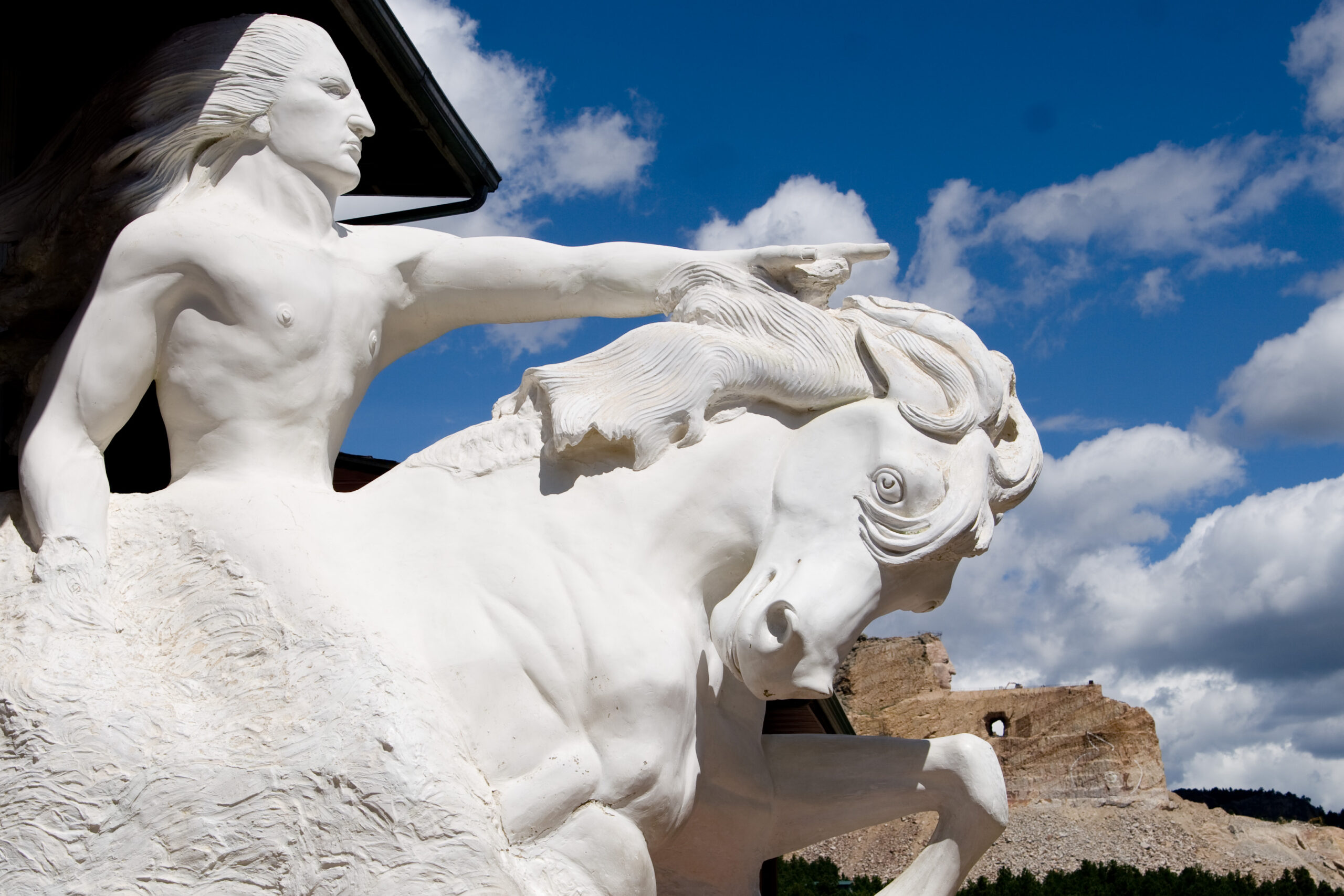 Before he became a warrior, Crazy Horse was known as “Curly” due to his long, wavy hair. Historians state that he was known to be a quiet and thoughtful child who enjoyed growing up on the prairies. At the age of five, he was not only a proficient horseback rider, but he knew how to wield bows and tomahawks as well.

When Crazy Horse was only 12-years-old, he witnessed the murder of his chief, Conquering Bear by U.S. troopers. The tribe attacked in retaliation and over 30 soldiers were killed. After this incident, Crazy Horse began to see visions, something his tribe elders encouraged.

As the visions intensified, Crazy Horse embarked on a rite of passage known as a “vision quest.” This involved venturing into the wilderness alone without food and water. This would last up to four days. It was during this vision quest that Crazy Horse saw a future where his people would live in peace. However, before that time would come, there would be a period of great bloodshed. 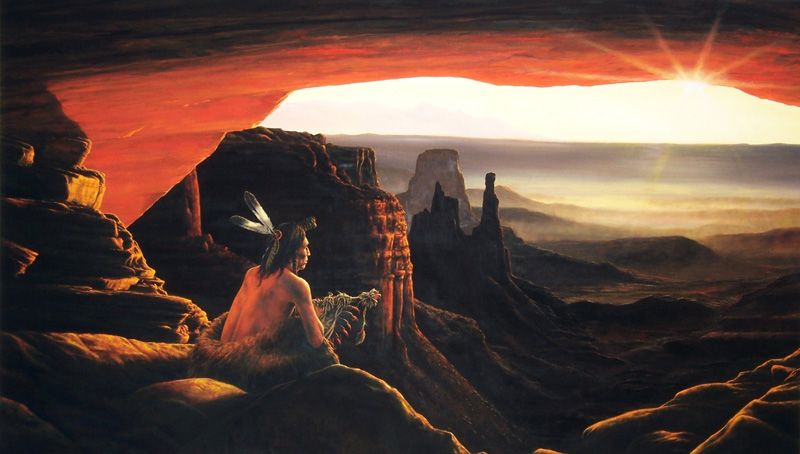 Through his teen years, Crazy Horse developed into one of the most skilled warriors of the tribe. His visions brought hope when all seemed lost and he succeeded in defeating many U.S. troops in epic, widescale battles. Some historians even believe he was the one who killed General George A. Cluster during the Battle of Little Big Horn.

The day of his death, Crazy Horse had been negotiating at Fort Robinson with the U.S. military, but an inaccurate translation by the interpreter gave the perception to the authorities that he was a threat. The troops tried to escort him to the jail, but Crazy Horse pulled a knife which resulted in him being mortally wounded by an infantry guard. He died only hours later.

In 1939, Chief Henry Standing Bear of the Oglala Lakota commissioned Polish-American sculptor, Korczak Ziolkowski to construct a large monument in honor of Crazy Horse. He told the sculptor, “My fellow chiefs and I would like the white man to know that the red man has great heroes, too.” 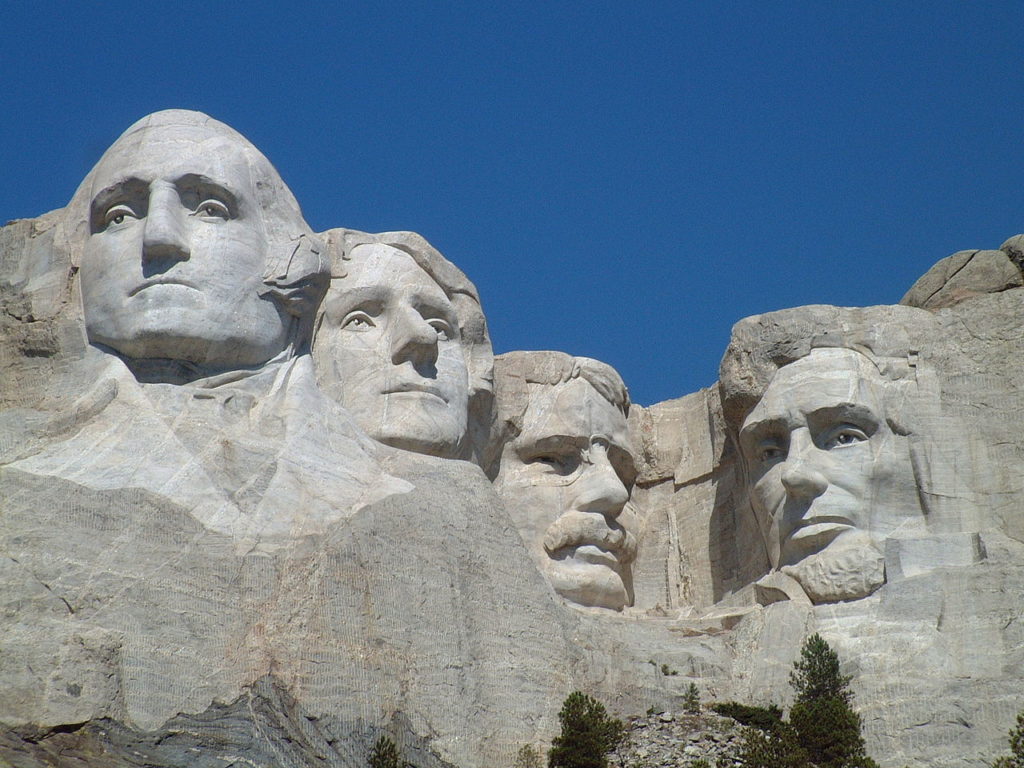 Unfortunately, Chief Standing Bear wanted a monument that was just not realistic in size and scope. He wanted the stone monument to be larger than the iconic four presidents at Mount Rushmore. Fortunately for Standing Bear, Ziolkowski dreamed big and was excited to help bring his vision to life.

To Ruth’s credit, the memorial actually made the most progress under her direction. While her husband wanted to carve out the horse first, she chose to focus on Crazy Horse’s face.  The face was completed in 1998, which allowed for the memorial to open to the public and begin to generate revenue from tourists. Currently, the monument is visited by over a million visitors each year.

Sadly, Ruth died in 2014 and many wondered what would become of the monument. Thankfully, her daughter Monique has stepped up to the plate to finish the family legacy. She’s looking for new solutions to speed up the process and make it more efficient.

“My father always said you had to work with Mother Nature because she’ll beat you every time,” she told NPR. “So that’s why we’re working with the engineers, and we will be putting in bolts for support…”

Unfortunately, not everyone is on board with the monument because no one asked members of the tribe if they could carve into the Black Hills, which they consider very sacred. “They were there for us to enjoy, and they were there for us to pray. But it wasn’t meant to be carved into images, which is very wrong for all of us,” said Elaine Quiver, a descendant of Crazy Horse.

Those against the construction may not have to worry much longer because, with no end date in sight, the monument may never be finished. Since funding comes from donations and tourism, there isn’t enough cash on hand to continue on the monument consistently.