Sometimes the Earth’s surface falls through, forming abysses of varying degrees of depth. It’s often nature that is responsible for these tricks, but sometimes it’s humans who cause them. While mystics and scientists argue about the origin of these places, tourists just go there to get a nice photo.

Scroll down to see the 10 Places on Earth that are Thought to be Portals of the Underworld. Read on and make your own remarks whether the surprising spots creep you out or leave you craving for more of what the world has to offer.

This gas crater was created by people. It’s called the “Gates of Hell” and it’s been almost half a century since the fire that was lit in 1971 has been burning there. There was a ground collapse while drilling and natural gas started to come out. In order to not harm the locals, it was lit supposing that it would stop burning in a day or 2. But their calculations were way off — the flame is there even now while the fire sometimes reaches more than 3 feet high.

The diameter of the hole is almost 200 ft, while its depth is about 65 ft.

Despite its evil look, this well was built with noble intentions — to provide the city with water during the siege. Moreover, it was created under the church’s patronage. The construction started in 1527 because that’s when Pope Clement VII settled in Orvieto after the sack of Rome. In the event of a siege, water was transported through this well by mules to the Albornoz fortress. 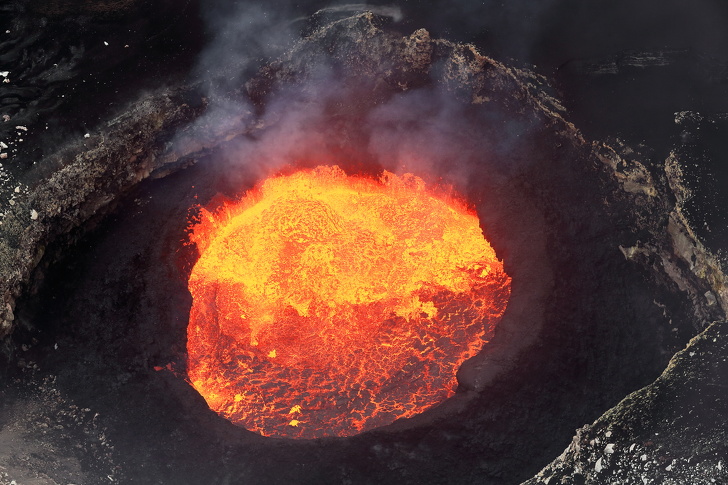 Yasur is an active volcano on Vanuatu Island. Its last eruption took place in 2017 and tribes living on the island believe that there is an ancient deity living in the crater of this volcano that can get furious if they bother him. That’s why it’s only elders and shamans who can go up to the volcano.

Of course, tourists are there too. Many thrill-seekers go there to climb Yasur because it’s one of the most reachable volcanos in the world. By the way, the movie CZ12 was shot there in 2012. 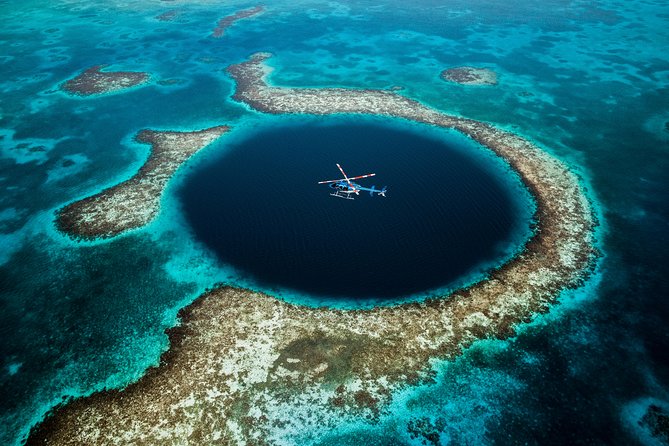 A giant marine sinkhole with a diameter of 1,000 feet and a depth of almost 400 feet was formed naturally. This destination attracts avid divers because of its mystery, but many of them lose their lives here. The hole even has the unofficial name — “diver’s cemetery.” The fact is that this depth is suitable only for very experienced divers, but many newcomers, who are not always able to assess their skills correctly, come here and sometimes their lives come to a sad ending.

5# The Inverted Tower of Masons, Portugal 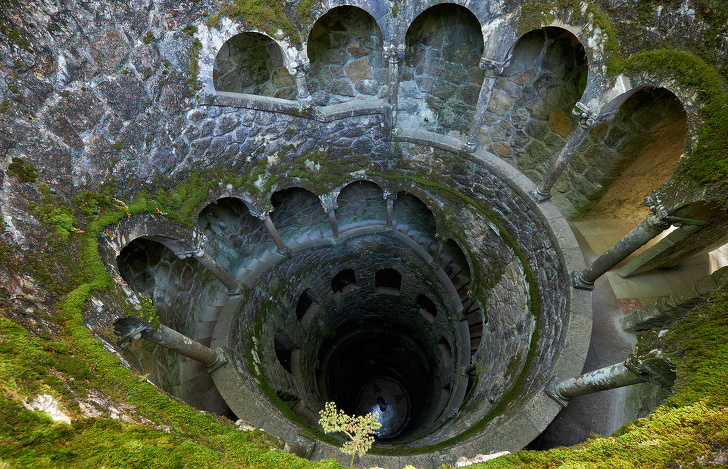 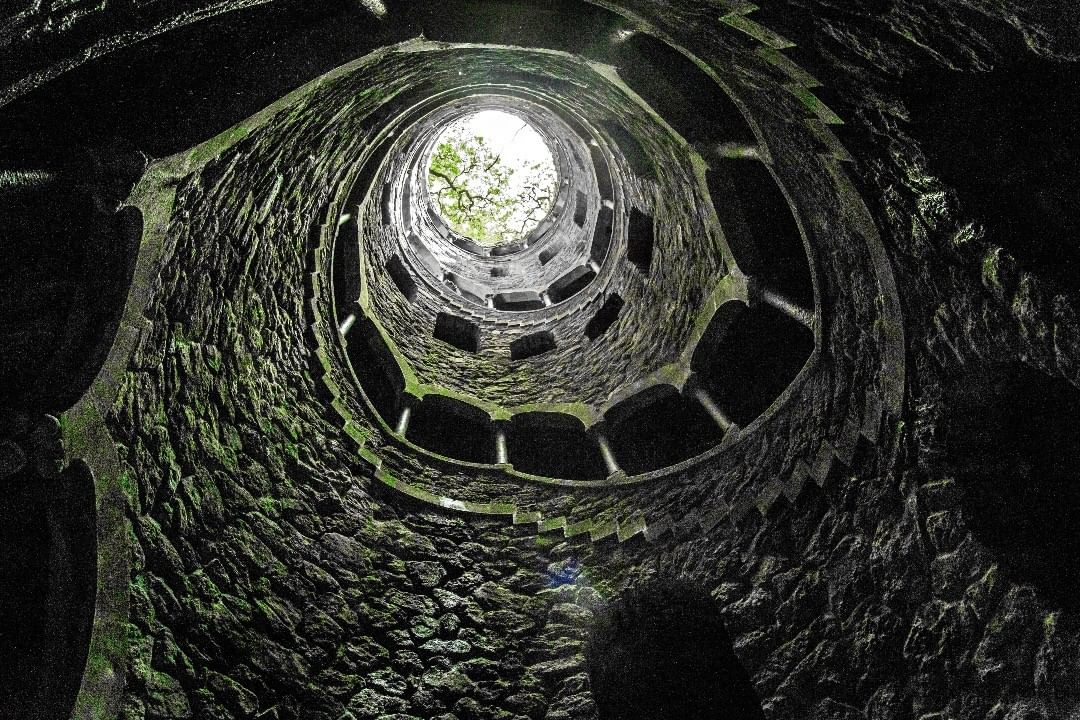 There was a mysterious well built at the beginning of the last century in Sintra, a town in Portugal. It serves as a transition from darkness to light. The spiral staircase that surrounds the well symbolizes passing the circles of heaven or hell, depending on which direction you’re going. Some time ago, here in the Initiation Well, masons used to perform initiation rites. The depth of the construction is impressive — a 10-story building could fit into it. 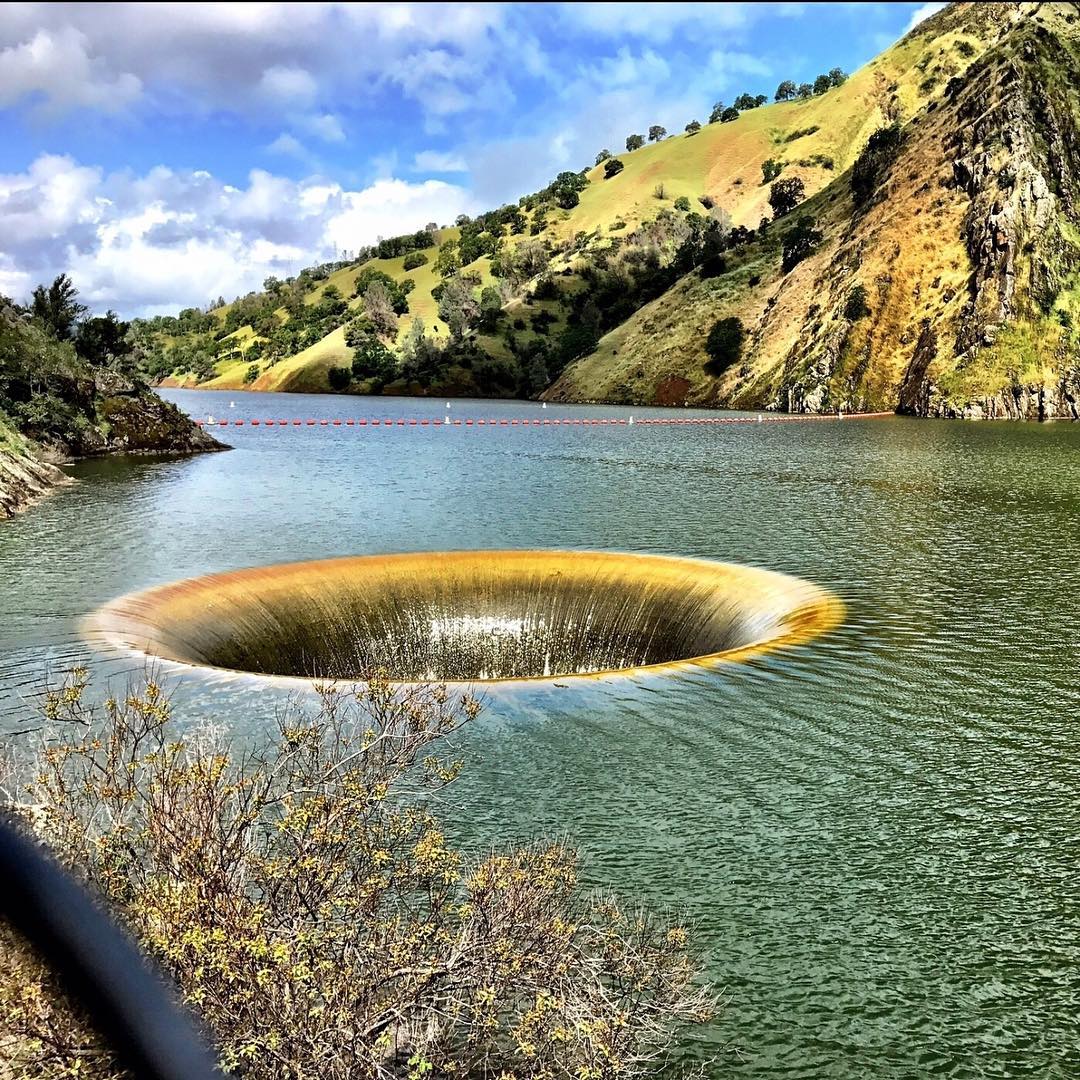 The largest man-made hole is located in the United States in Northern California.

The spillway is extremely impressive — tons of water crashes down through it in just seconds. This construction was built 50 years ago and still induces intense feelings in tourists from all over the world. It is known as the largest man-made hole in the world.

The reservoir looks terrifying, given the heavy flow of water and known deep hole, but undoubtedly beautiful. The dam is also known as Monticello Dam while the spillway is called “Glory Hole”. The spillway cannot be underestimated as it can drain up to 48,400 cubic feet per second, thus, swimming anywhere near it is prohibitive because of the obvious risks. 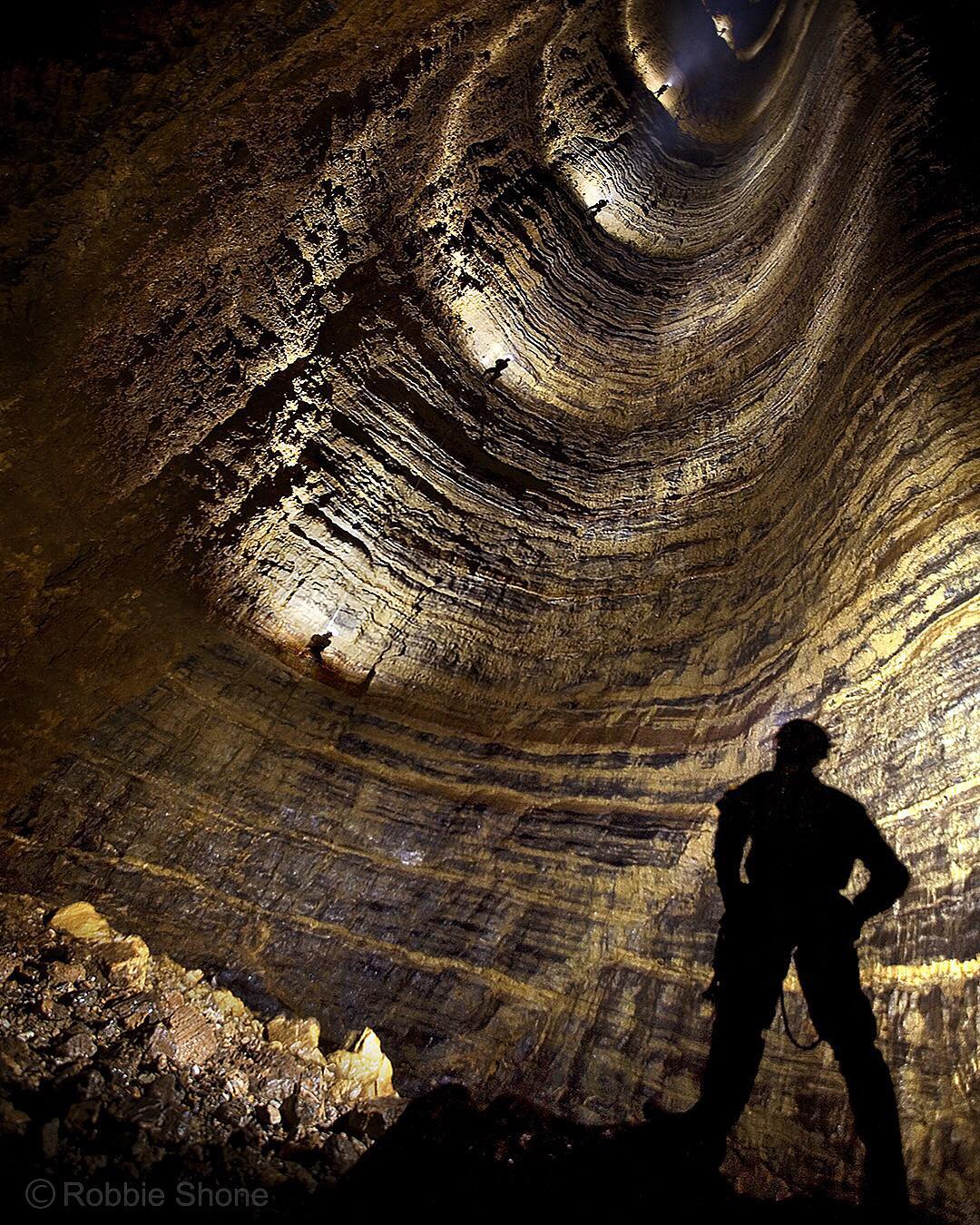 In China, a group of spelunkers accidentally discovered a system of caves that are so enormous, they have their own ecosystem. You can even dive into fog or watch clouds form inside the cave.

The underground rivers and lakes in this cave system are inhabited by living things that are not found anywhere else on the planet. Here you can see eyeless albino fish — they don’t need color or eyesight since they live in total darkness. 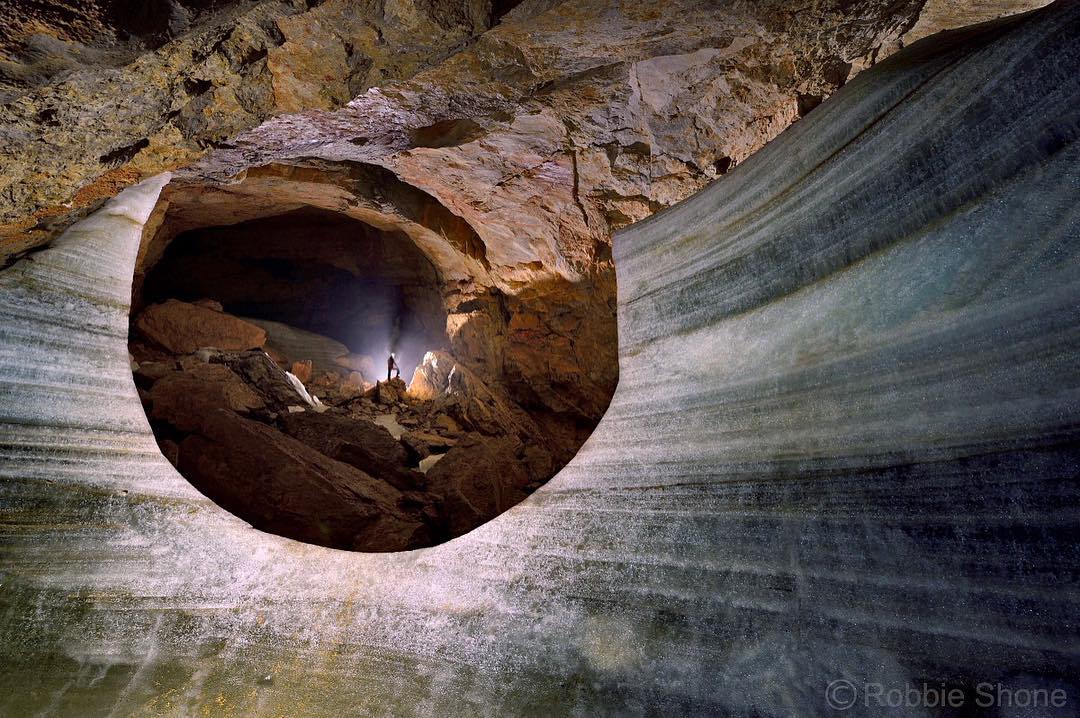 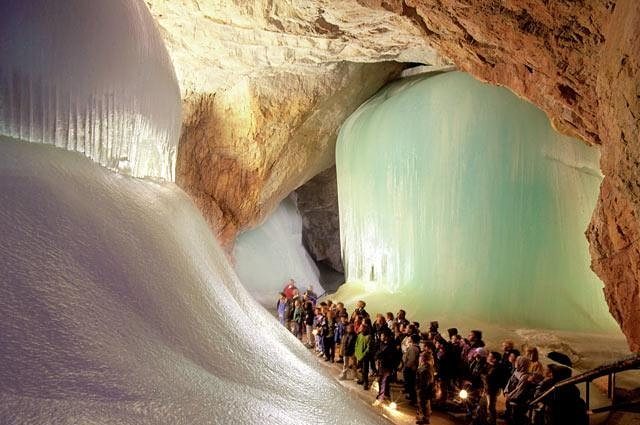 This cave is located at a height of more than 5,000 ft. Its name is translated as “World of the Ice Giants” from German. It’s the biggest ice cave in the world: 26 miles in length and more than 1,300 ft in-depth, the volume of ice growths is more than 1 million cubic feet.

Earlier tourists had to walk up the whole 5,000 ft to reach the cave, today a special funicular can get you there in just a few minutes. 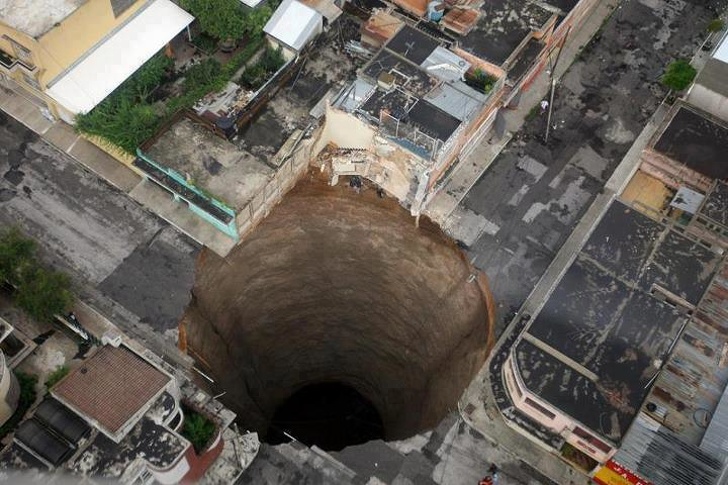 This sinkhole was created naturally not very long ago. On June 1st, 2010, a 3-story factory, together with a house standing next to it, collapsed under the ground in one of Guatemala’s districts right in the middle of the day. A big hole appeared in its place.

Researchers say that its soil is rich in limestone that is easily washed away by water. Local residents are convinced that the dilapidated sewage system in the city is responsible. 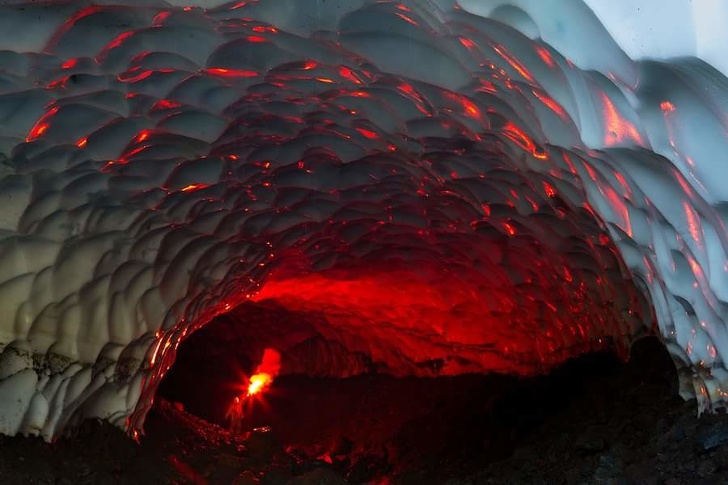 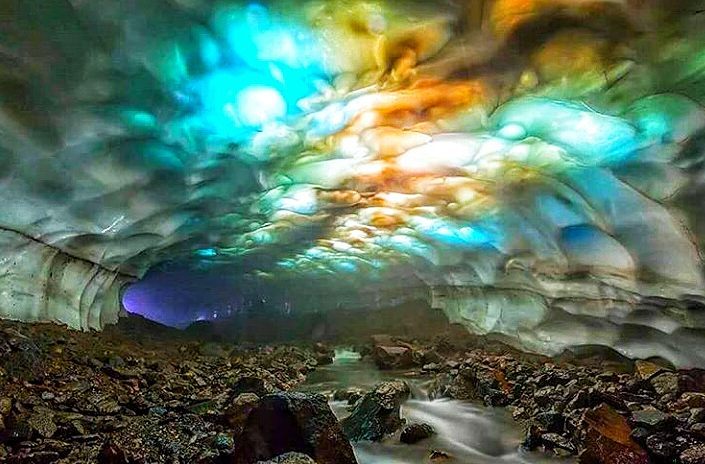 The Mutnovsky volcano, where scientists have discovered an ice cave, is located on the Kamchatka Peninsula in Russia. The volcano and the ice cave are totally OK living next to each other.

Unfortunately, glaciers have been actively melting recently and the upper layer of the cave has become very thin. But it’s the backdrop for some fantastic colorful pictures on its arches.

Were you inspired or frightened by these unearthly landscapes? Would you like to take a trip to the core of the Earth? We would be glad to hear from you.

Adorable Italian Zonkey is Half Zebra, Half Donkey Previous post
Meet The New Grumpy Cat Called Kitzia That Looks Even Angrier Than Her Late Predecessor Next post