15 Underground Destinations You Should Add to Your Traveling List

The planet is filled with a lot of awesome places to visit, but sometimes is nice to look beyond the surface. The world has a lot of special underground locations too that will definitely help you create a unique bond with the planet.

Below are 15 underground destination that you will totally fall in love and add to your traveling list. 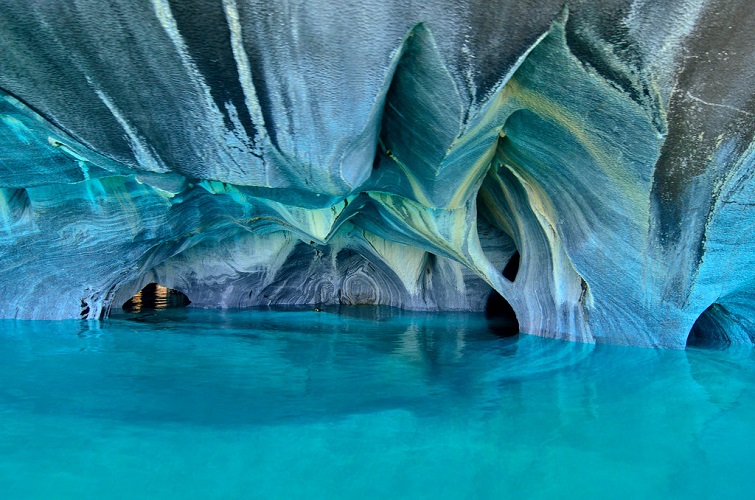 Travelers will discover the impressive Marble Cathedral located on lovely Lake General Carrera in Patagonia in Southern Chile.  Once you’re actually inside, you can’t help but be impressed by this marble that was once mere limestone.

This cathedral’s striated interior takes on beautiful blue hues.  This is because the lake’s turquoise waters are reflected onto them and blend with the stone’s whiteness.  In order to see the inside of the magnificent Marble Cathedral, you can either try kayaking or sign aboard one of the boat tours offered there.

Are you a fan of the famous Wild West?  If so then you are going to really enjoy Hannans North Tourist Mine situated in Kalgoorlie, Western Australia.  Here you can explore a city full of colorful pubs, defunct brothels, and numerous historic buildings.

Here you will also learn something about a place rich in over a century of gold rush history.  Ride the old wire-mesh elevator 30 meters below the earth and visit the various excavated galleries.  Veteran visitors say that to this day you may still find a gold nugget or two! 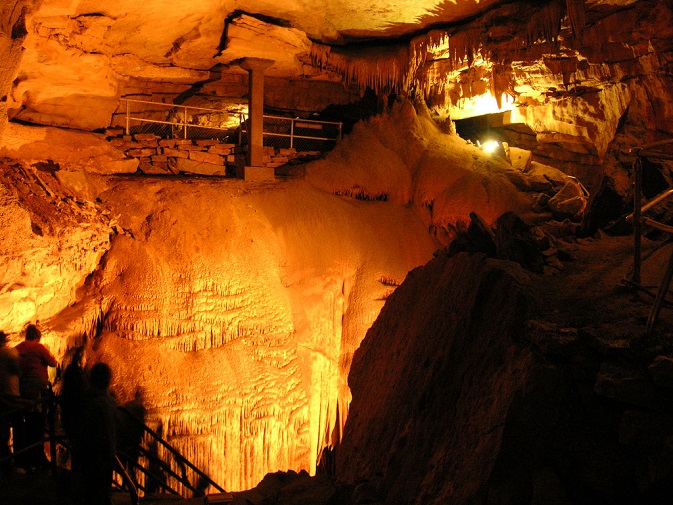 Located near Brownsville, Kentucky, the popular Mammoth Cave National Park was founded in 1941.  It includes almost 53,000 acres and spans three different counties.  It is named for Mammoth Cave which features the largest network of underground galleries and natural caves on the planet.

With cave names such as “Frozen Niagara” or “Grande Avenue”, it should be obvious how truly spectacular these well-known caves really are.  These various formations were created roughly 10 million years ago.  In other words, they were here approximately 9.5 million years before the first human ever walked the earth. 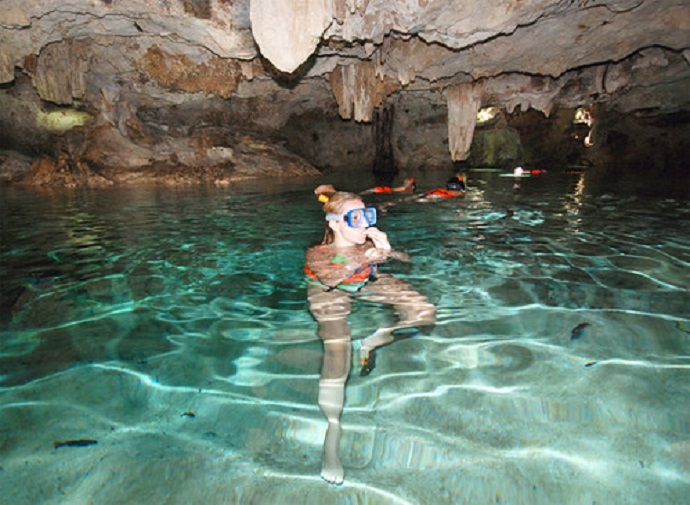 This nature park in the famous Riviera Maya is nestled amidst the thick jungle just northeast of popular Quintana Roo.  Here visitors may choose from a number of different recreational activities within a natural environment.  The highlight here, of course, will have you strolling along the crystal clear underground rivers.

The caves are underneath an actual equatorial forest.  Here you will see a nigh supernatural underworld rife with noteworthy mineral formations like fossils, stalagmites, and stalactites.  You can explore this park on foot or go diving and have an underwater adventure.

5. The Catacombs of Paris, France 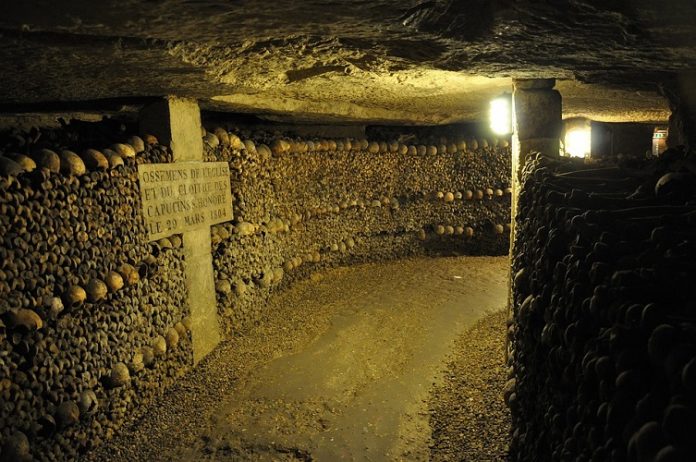 The creepy Catacombs of Paris have been open to visitors since 1809.  Here beneath the “City of Lights”, you can explore the dark labyrinth in the capital city’s underground.  This is one of the world’s largest ossuaries and holds the remains of literally millions of residents.

The remains themselves harken back as far as the 1700s, during a period when the city’s cemeteries were starting to become overcrowded.  As a stopgap solution, many of the remains from the old cemeteries were relocated into disused, renovated quarries.  Be careful not to get lost, or you might become part of the attraction.

6. The “Wieliczka” Salt Mine, Poland 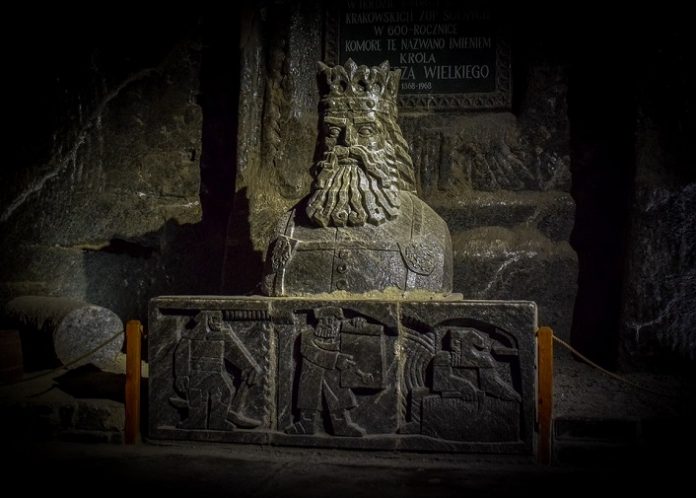 You can find the “Wieliczka” Salt Mine in the little town of Wieliczka in the Kraków metropolitan area. In South Poland.  Salt was actually a precious mineral back in the day of knights and castles.

Over nine centuries of exploitation have given birth to huge caves and galleries that span an area of more than 287 kilometers.  This mesmerizing place also features memorable salt-carved statues, lakes, and chapels.  You simply must see the statues of Leonardo’s the Last Supper and Saint Kinga.  The salt mine also includes the largest mine museum on the planet and even concert halls with unbelievable acoustics. 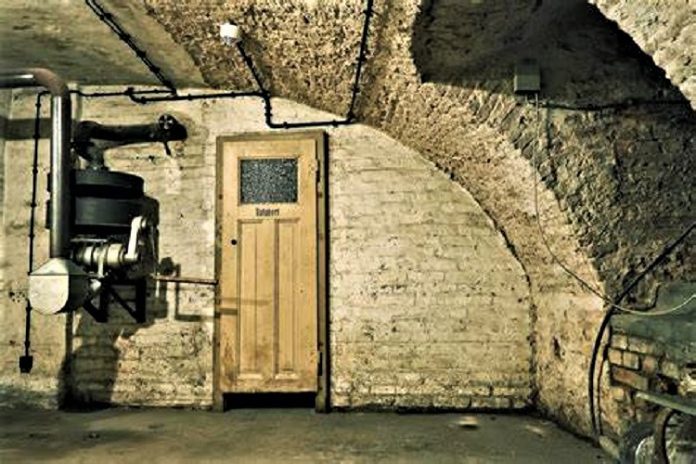 Travel back through the mists of time to the historic Berlin Bomb Shelter in Berlin.  This German city was a major target during World War II.  Civilians frequently took shelter beneath the streets.

Here you can experience one of the only remaining civil air raid shelters in Berlin.  You can see such preserved artifacts as photographs, utensils, and even weapons.  This bomb shelter was originally designed to house roughly 3000 civilians.  You will be both chilled and stunned by this relic from a truly turbulent time.

8. The Catacombs of Rome, Italy 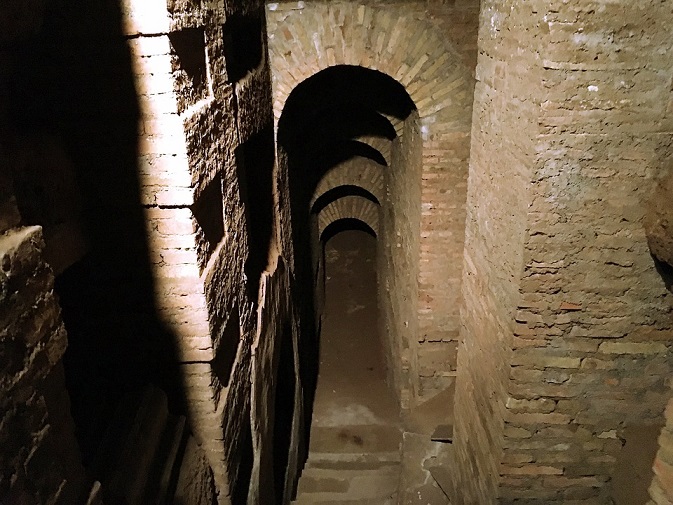 The mysterious Catacombs of Rome were once the burial place for the first few generations of Christians.  Hundreds have been laid to rest here in these extensive catacombs.  These impressive underground tunnels are man-made.

They were actually dug by hand more than 2,000 years ago.  Veteran visitors suggest exploring them with a tour guide.  A visit to this place will definitely reveal a side of the popular city that you probably never knew was there.  It will no doubt be a truly memorable experience.

9. The Great Pyramid of Giza, Egypt 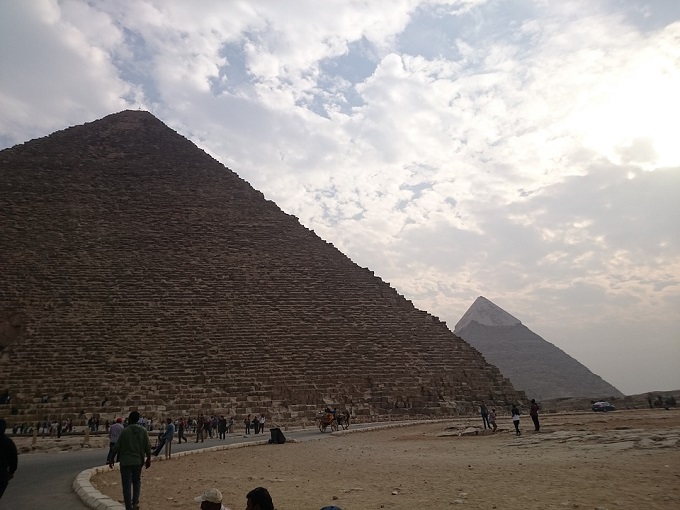 This aged attraction is reported to be the last remaining “wonder” of the famous Seven Wonders of the Ancient World.  This is a remarkable place that seasoned travelers say everyone should see before they die.  The grand Great Pyramid of Giza is also known as the Pyramid of Cheops and the Pyramid of Khufu.

The pyramid is now over 5,000 years old making it the oldest of the three structures in the complex.  It is 146.5 meters tall.  The pyramid has stood as the highest man-made structure anywhere in the world for more than 3,800 years.

10. The tunnel beneath the Castle of Lucca, Italy 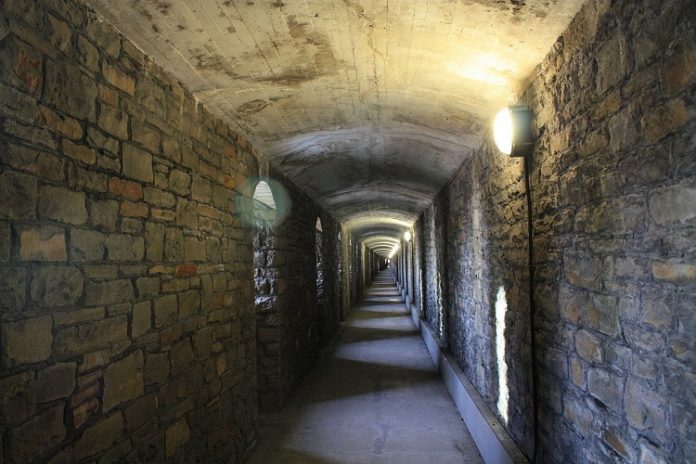 Travel to the quaint town of Lucca, Italy, where you will find a locale truly rich in tradition and history.  Take the long medieval pilgrimage route known as Via Francigena.  It is lined with medieval abbeys, castles, churches, and villages.  Ah, but the true highlight here is the extensive tunnel beneath the medieval Castle of Lucca.

Here you will cross the illuminated, wide alleyways and take in the ancient stones, which harken back to the era of the knights. 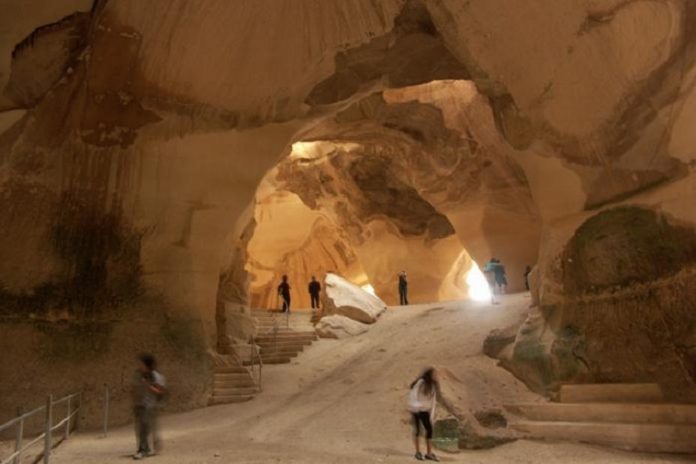 The famous Caves of Maresha and Bet-Guvrin are ensconced in the well-known Judean Lowlands.  There are more than 1,000 caves here.  Hundreds of them are shaped like bells.

These caves here are man-made.  Men once dug through a thick layer of limestone to create them.  Due to the many rooms one will find there, this place has been long known as “the city under the city.”  It was officially designated a UNESCO World Heritage Site in 2014.  It is truly a spectacular monument to visit. 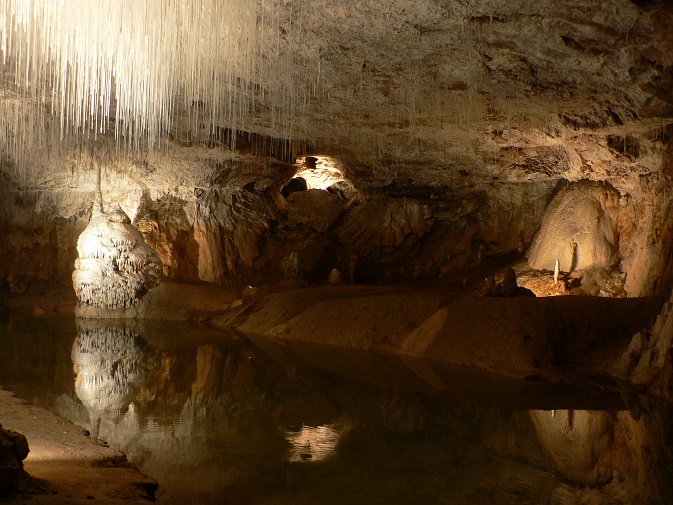 The great Grotte de Choranche is in Choranche in the French province of Isere.  Ensconced in the beautiful Vercors massif, the cave is known for its mysterious inner beauty.  Those in the know say it is one of France’s “most beautiful caves.”  The cave overlooks underground rivers and lakes and some have even said it provides visitors with “a truly magical display.”

Take in the view of the emerald green reflections, crystal white rugged rock formations, and the thin, fragile “straws” or stalactites as well.

13. The underground town of Derinkuyu, Turkey 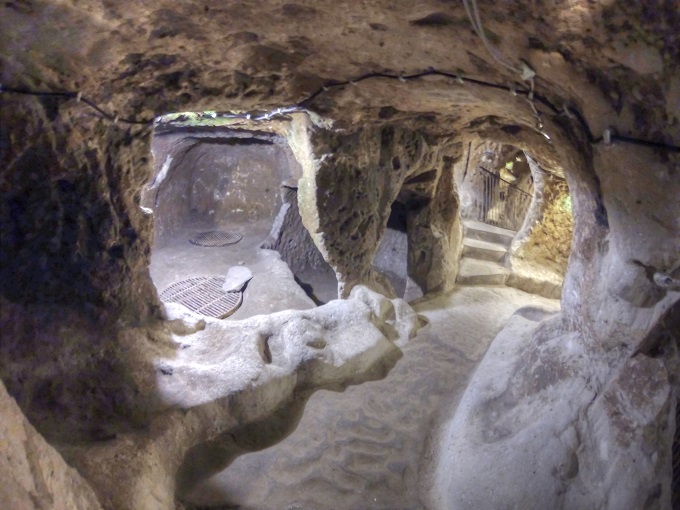 The underground town of Derinkuyu may be over 1,000 years old, but it remained undiscovered until a passage to the lost locale was found some time in 1963.  Located 60 meters under Turkey’s Cappadocia region, this excavated city was designed to be large enough to house up to 20,000 residents, their food stores, and livestock as well.  It includes places of worship, stables, warehouses, and more.  Walk through the narrow, historic corridors of this fascinating, ancient, multi-level underground metropolis. 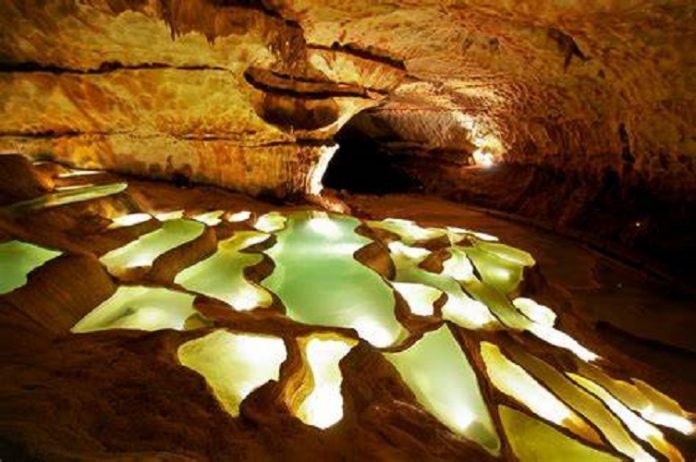 Visit the gorgeous Gorges de l’Ardeche.  For it is there in the French department of Ardeche that you can explore the Saint Marcel Cave.  This cave was actually discovered in 1836 by an unknown hunter who was looking for his lost ferret.

As this goes to press, officials have discovered 60 kilometers of grand halls and galleries.  This underground network was carved out by the surrounding water.  See the calcite basins, and unique formations all enchantingly illuminated.  Veteran visitors recommend taking the self-guided tour. 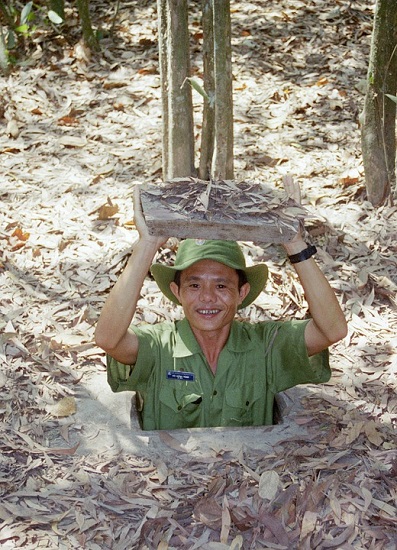 If you visit Vietnam, be sure to stop in the Củ Chi District of Ho Chi Minh City to explore the famous Cu Chi Tunnels.  This incredible complex of underground tunnels leads to an actual underground village.  This place harkens back to 1954 when it was created by Communist forces during the infamous Vietnam War.

Thousands of Viet-Cong soldiers once took refuge here in this place that includes a dormitory, a kitchen, and a hospital too.  Despite the heavy bombing, this underground village did not surrender to the surrounding destruction and is ready to visit now.