20 Incredible Natural Phenomena Caught in Camera That You Must See

With life becoming more dynamic every day and more, we tend to get lost in our busy routine and forget that there are more than work, cars and bills out there. There is quite some stunning stuff happening every day outside in nature, in some cases right outside your door.

We all know mother nature has its own wonderfully strange way of surpassing every human marvel ever made. Every once in a while it throws up something that makes you sit up and gasp in amazement. Some people have so lucky as to capture these moments and immortalize them forever.

The camera is indeed the strongest weapon when it comes to remembering moments forever. It is the tool that takes us back in a certain period of time making us learn things of the past as if we were actually there. It is also a great witnessing tool that captures some really strange moments no one thought possible that occur in nature.

If you’ve missed these unique, strange, scary, and yet incredible spectacles of nature, scroll down to see some of the most incredible phenomena that people have witnessed. 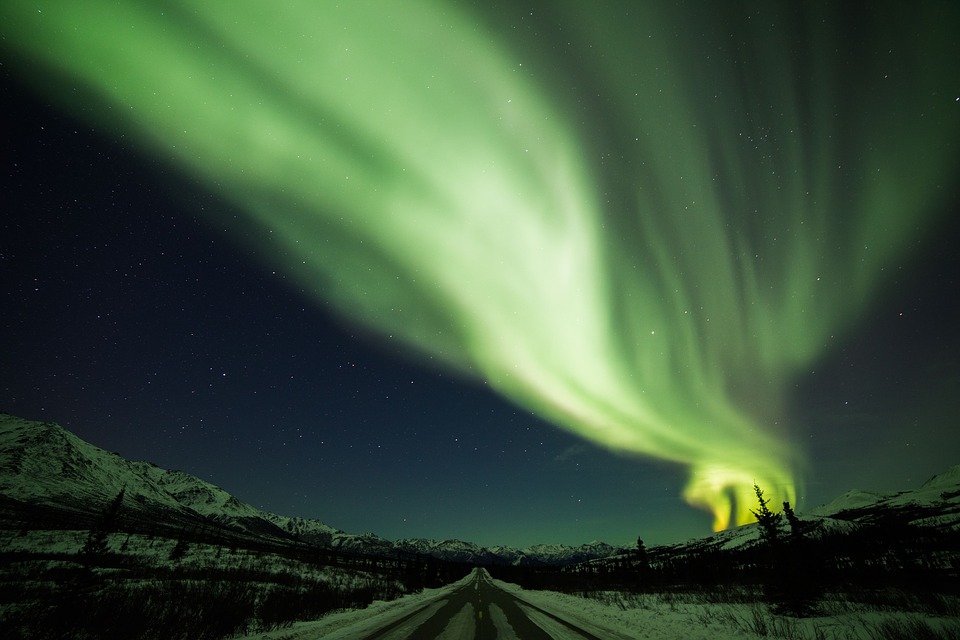 As electrically charged particles from the sun react with atoms in the upper atmosphere, this heaven manifests itself on earth. 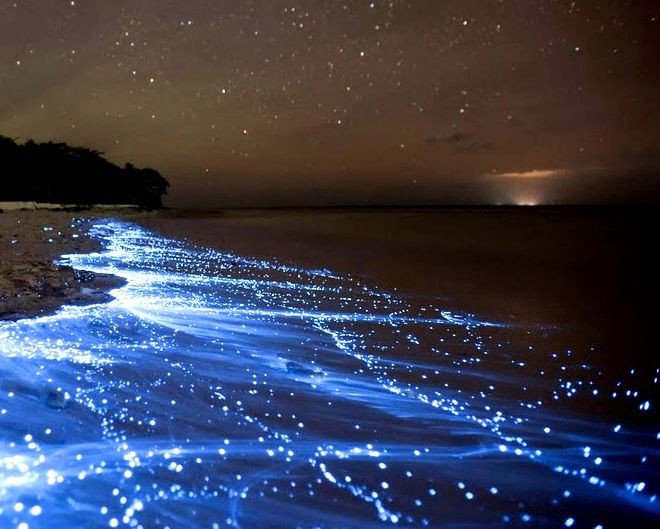 Fairy lights in water! Occurs when the shimmers of the full moon aggravates the tidal currents to wash the chemical energy off of phytoplankton buried in the Maldives shore. 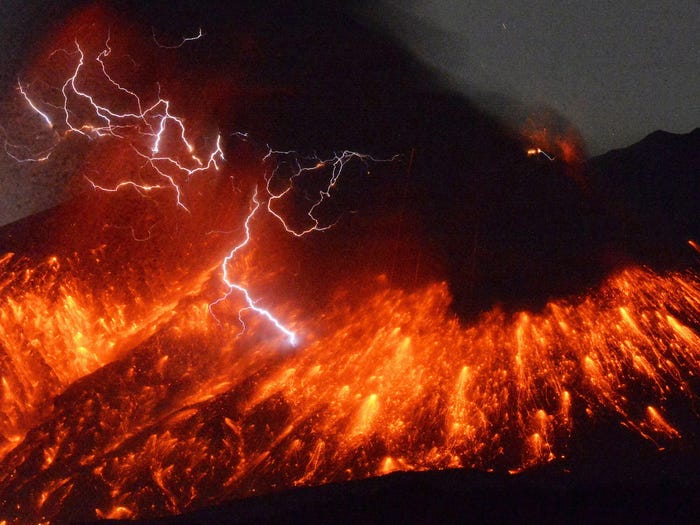 It’s pretty hard to study, but researchers have a few ideas about what causes it. One of the most common is that during an eruption, ash picks up so much friction that the build-up of static electricity causes lightning. 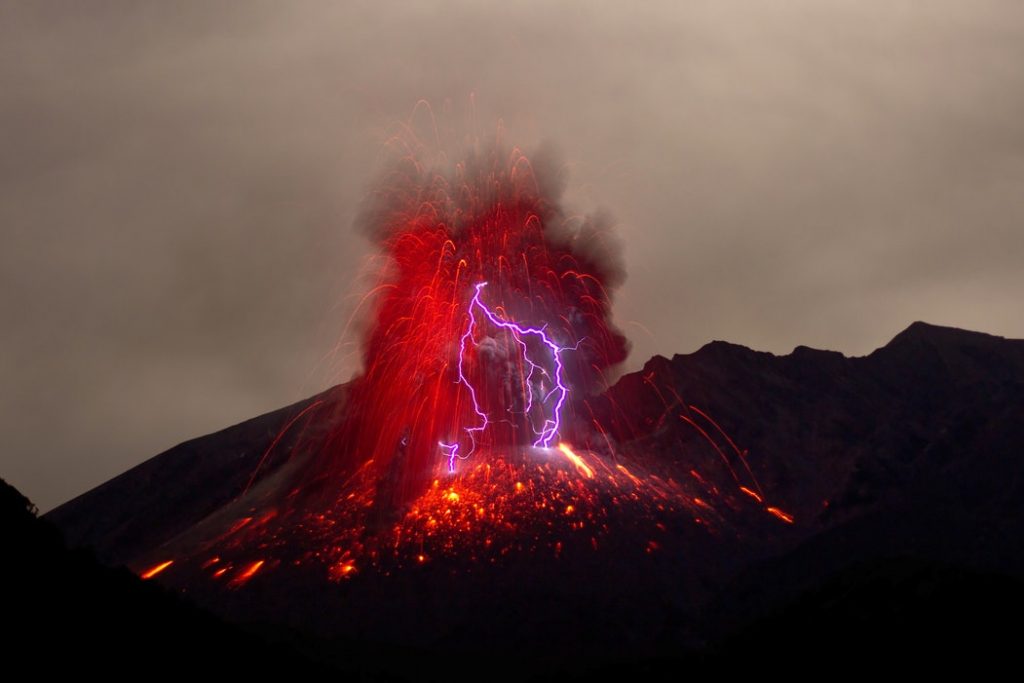 No doubt how the proverb ‘beauty is lethal’ came about. Sakurajima is at her most gorgeous when she gets violent enough to rain fires of ash 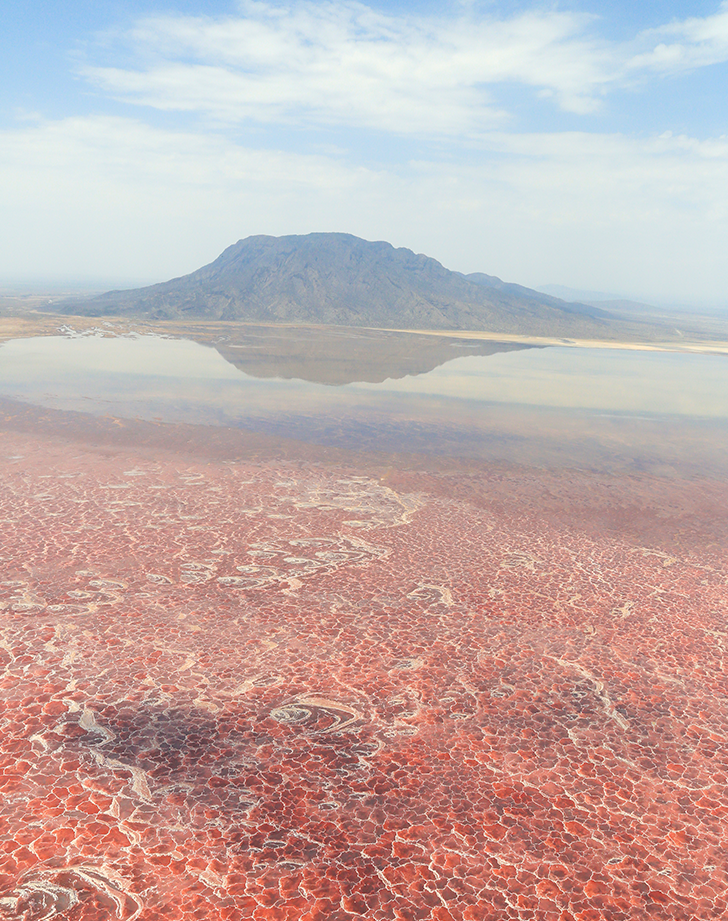 Explorers discovered the red-hued river flowing off the Taylor Glacier in 1911, but it wasn’t until last year that we figured why exactly the water was red. Turns out, there’s iron in the water (from an underground lake) that oxidizes as it hits the air. It’s tricky to get to Antarctica, yes, but certainly worth the trip to see this five-story-tall phenomenon in person.

The high salinity of the water combined with the energy emitted by the microalgae ‘Dunaliella Salina’ results in this vibrant natural phenomenon in Australia.

When the wandering clouds stop to add more jewels in the crown of Mount Fuji, Japan.

8. These clouds are called “lenticular”, they are structures similar to ice cream cones 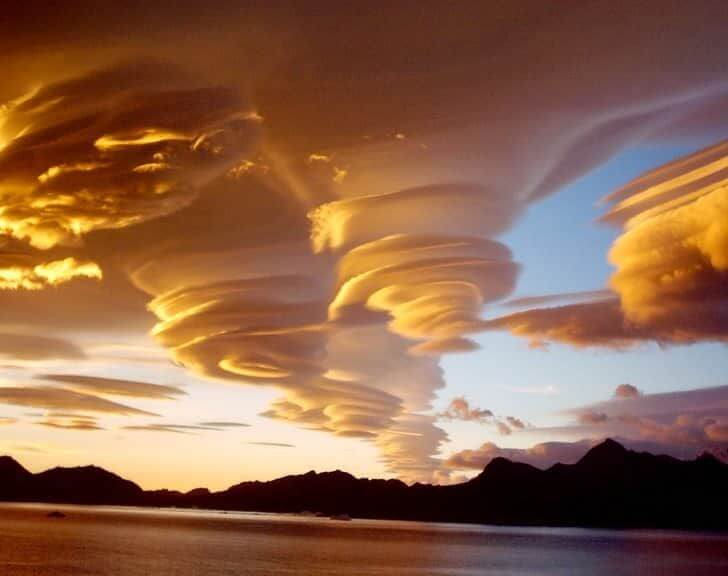 Lenticular clouds are stationary clouds that form mostly in the troposphere, typically in perpendicular alignment to the wind direction. They are often comparable in appearance to a lens or saucer. 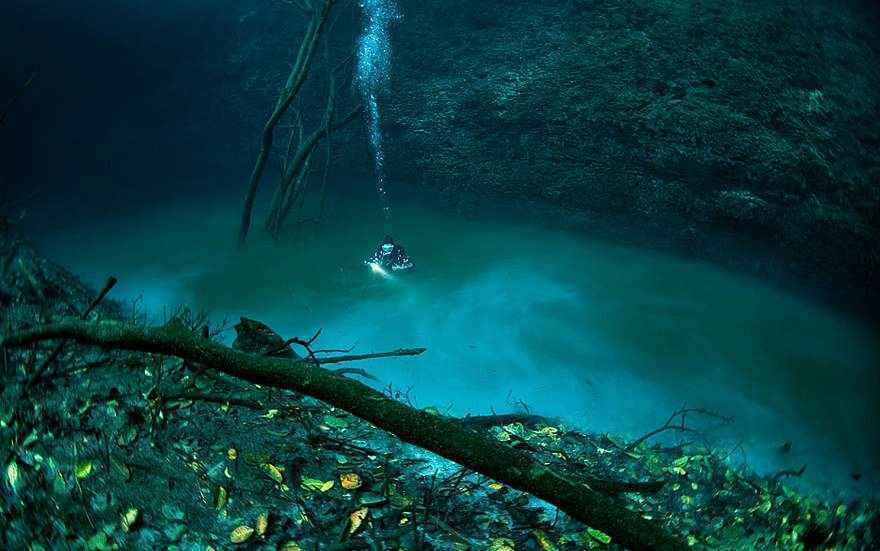 Scuba divers! Be all ears. This spectacular underwater river, Cenote Angelita flowing under the Yucatan Peninsula is assured to make you feel weak in the knees!

No one would mind saving up for an eternity to get closer to this place. Keep in mind, nature has been working on it for 6000 years by driving the waves to wash the calcium carbonate off of the walls. 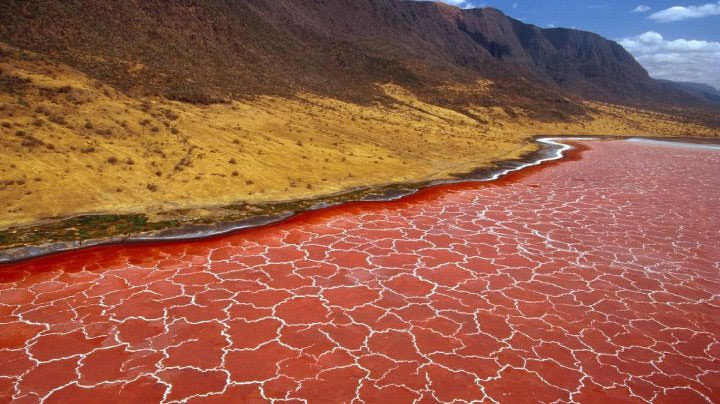 Official home to thousands of lesser flamingos despite its extremely high alkalinity, is this mysterious lake along the northern Tanzania. Adding to it, temperatures here reach as high as up to 40 degree Celsius and pH level up to 12. 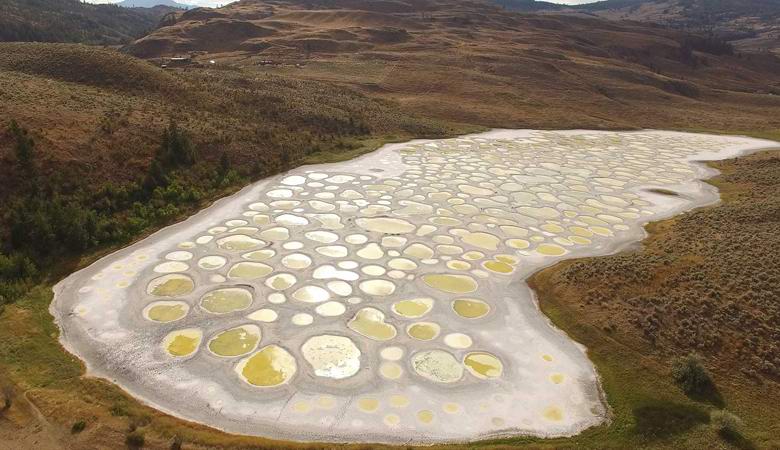 The colorful lakes spread over in this landform is just due to high concentration of minerals in the water. Needless to say, it’s perceived to be the most magical place in Canada. 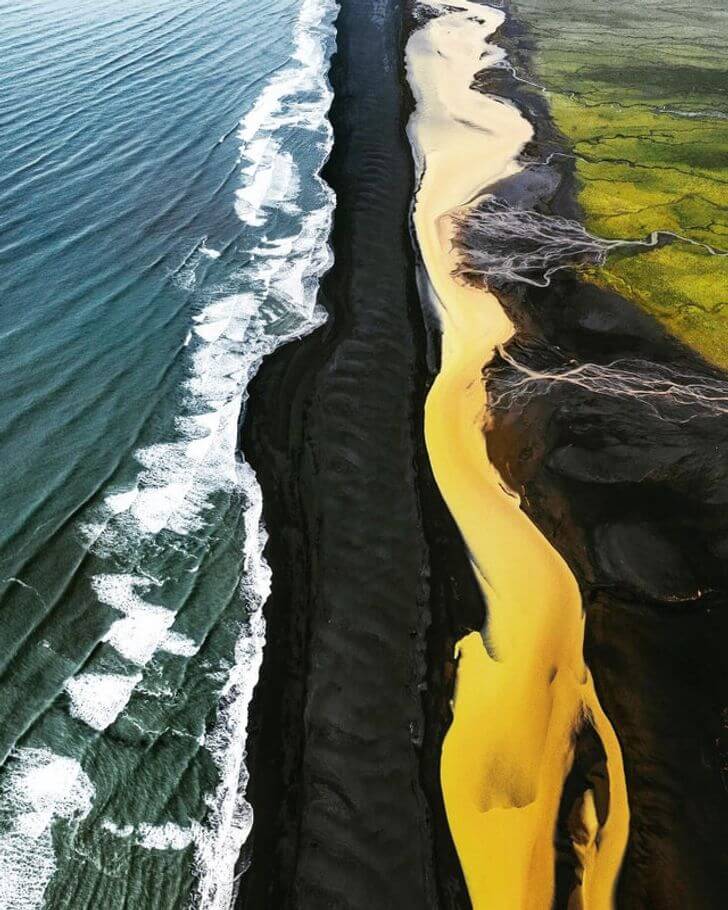 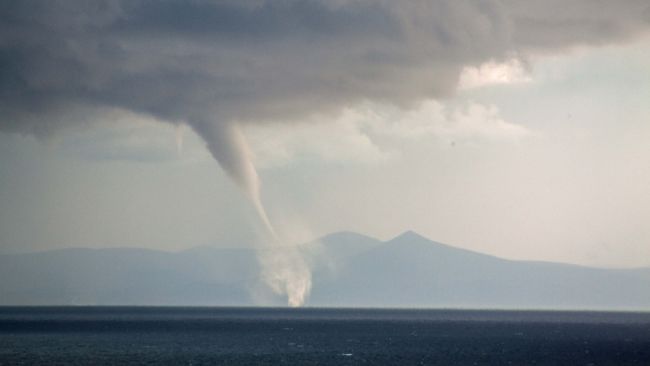 Looks like the sky is transferring its superpowers to water. If you happen to spot this, it’s best if you go tuck yourself in your room and watch it from a distance. Tornadoes on the way.

15. Lake Maracaibo, the lightning capital of the world 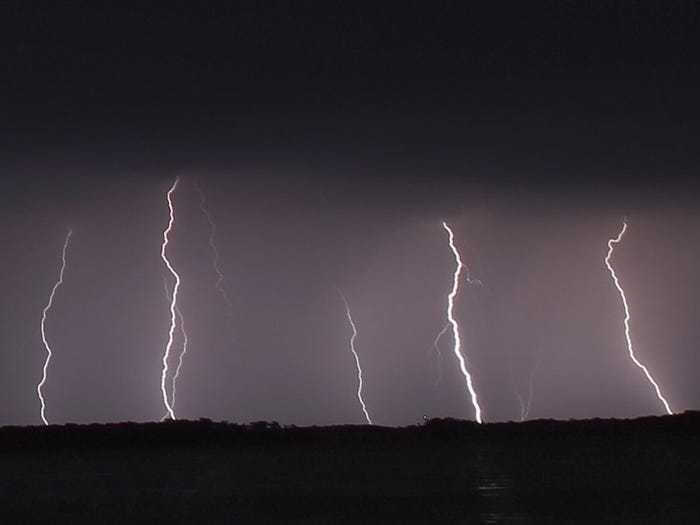 Lake Maracaibo in Venezuela sees more lightning strikes than anywhere else on Earth: In fact, there are thunderstorms here 300 days out of the year, according to a recent NASA study.

The area is so stormy because cool mountain breezes and warm, moist air clash over the lake, creating electricity. 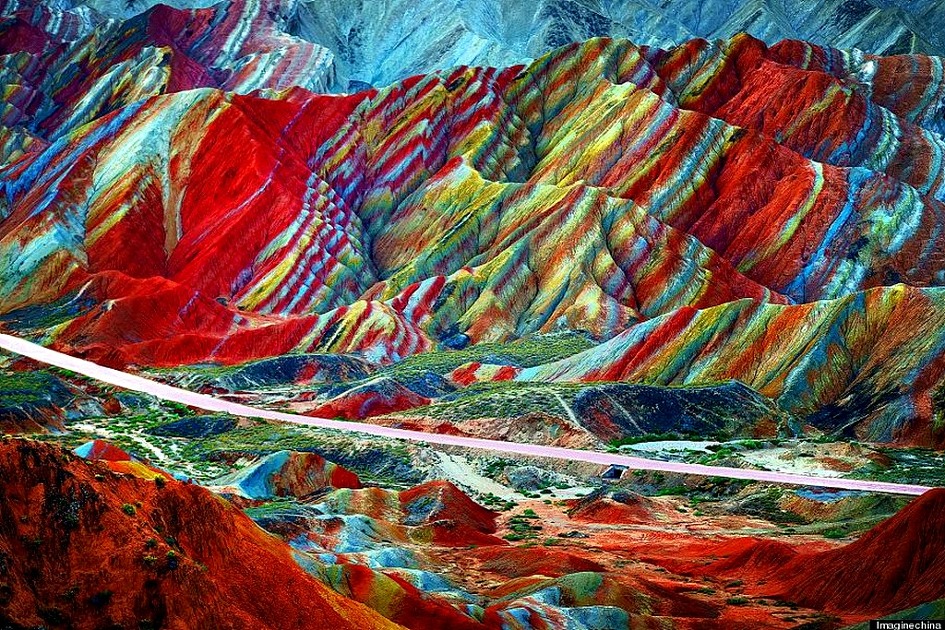 The official color palette of the earth. 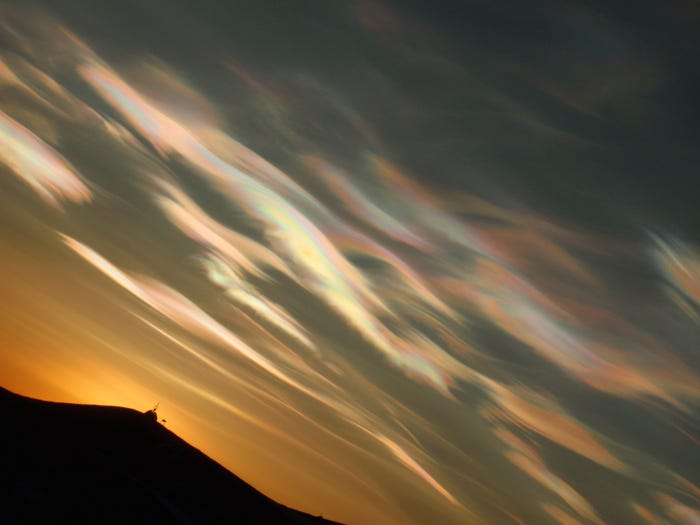 Usually spotted only near the poles, nacreous clouds form very high in the atmosphere (twice as high as commercial airplanes fly), where the air is particularly cold and dry. The colorful shine actually comes from the setting sun being lower in the sky than the clouds, so they reflect sunbeams back toward Earth. Unfortunately, while they’re beautiful, nacreous clouds also destroy ozone, the compound that protects us from the sun’s most dangerous rays. 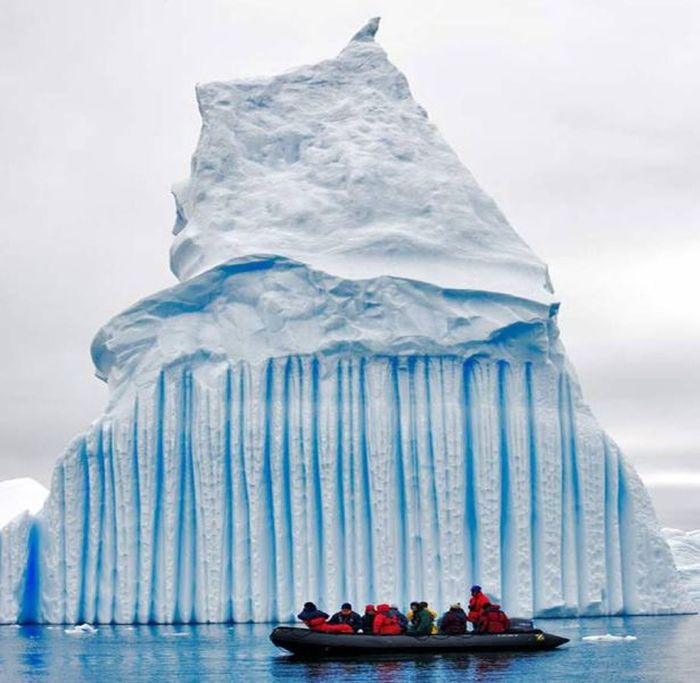 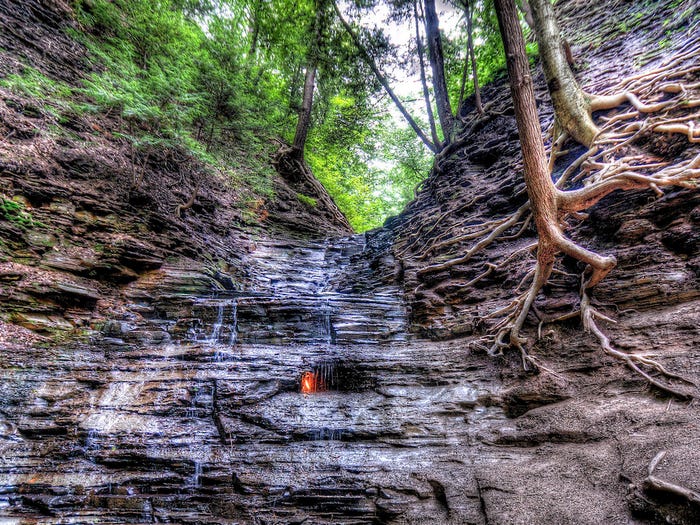 In upstate New York, near the Canadian border, there is a small waterfall hiding a big surprise: a shoot of fire about eight inches tall. Behind the waterfall is a natural gas seep that feeds the flame.

It’s sheltered enough by the waterfall to stay lit pretty reliably, although hikers do re-light it if they see it’s been blown out. (We should note that it’s not 100% natural — but too cool to skip.) 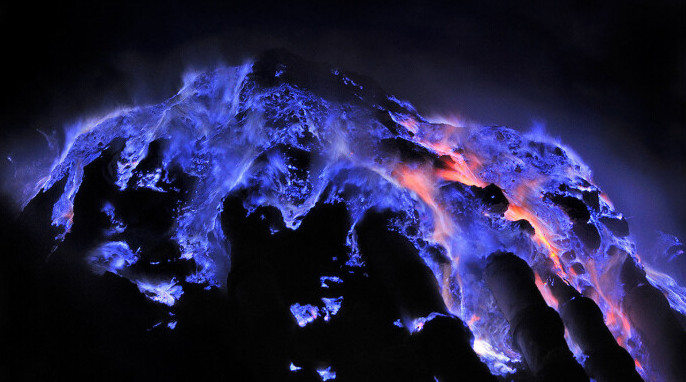 Kawah Ijen volcano for the love of blue and everything in blue. High quantities of Sulfuric gas in extreme pressures dazzle in blue as soon as it comes in contact with the air outside.