An ultra-rare white humpback whale was Tuesday spotted off the Australian coast as he migrates towards warmer tropical waters to mate. The stunning footage was captured by Jonas Liebschner, a photographer for Whale Watching Sydney, who had been expectantly waiting for Migaloo all week.

The albino is widely believed to be Migaloo, the world’s best-known all-white humpback who has built up a loyal following in Australia since first being sighted in 1991.

Migaloo is an Aboriginal word meaning “whitefella”. He was seen and photographed off Byron Bay on Australia’s east coast, heading north on his annual migration from Antarctica to warmer waters in Queensland state.

“I cried. I screamed ‘You gorgeous whale, thank you for being here for us today’,” Alison Reid, who saw Migaloo on a whale-watching cruise, told national radio.

“He’s amazing. It was just an incredible sight, it was so unreal.”

Oskar Peterson, who runs the Australian-based White Whale Research Centre, said a study by Southern Cross University in 2004, which managed to get skin samples from the whale, had shown Migaloo was male. He was now believed to be around 30 years old. 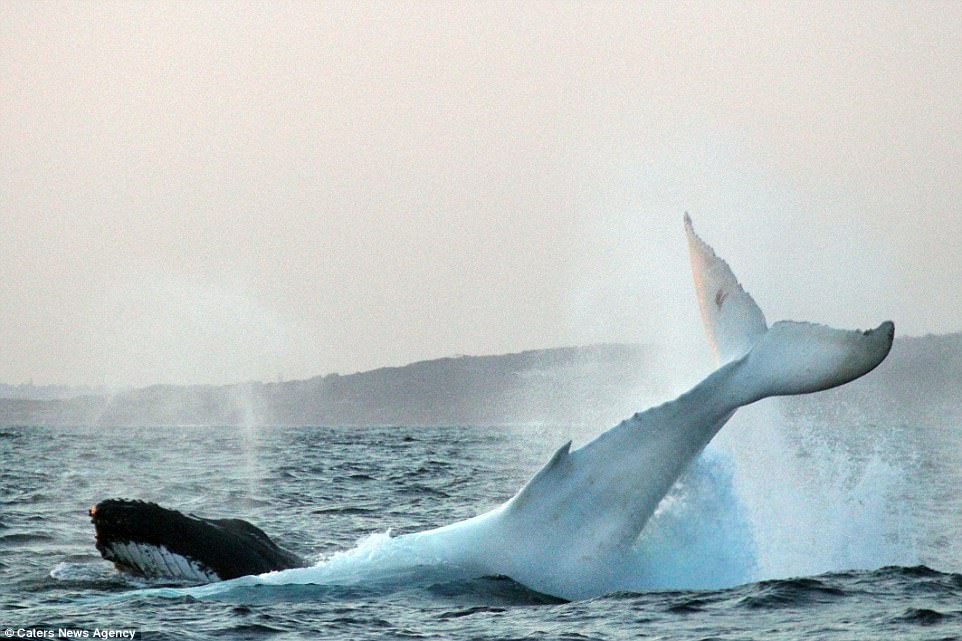 The whale is expected to gradually make his way as far north as Cooktown in the Australian tropics before the return trip to Antarctica later in the year.

Australia’s east coast humpback population has been brought back from the brink of extinction following the halting of whaling in the early 1960s. However, there are believed to be only two or three white humpbacks in the world.

The stunning footage was captured by Jonas Liebschner, a photographer for Whale Watching Sydney, who had been expectantly waiting for Migaloo all week 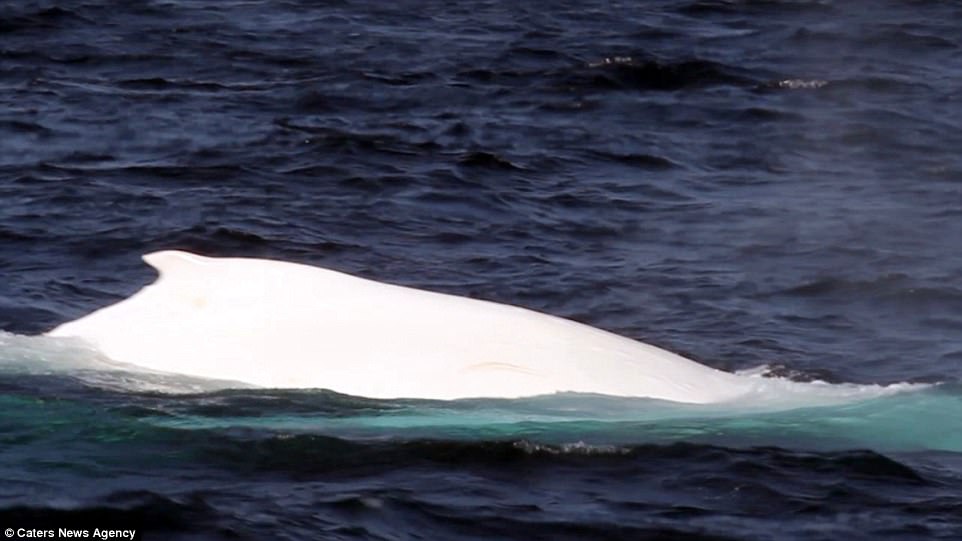 The stunning footage was captured by Jonas Liebschner, a photographer for Whale Watching Sydney, who had been expectantly waiting for Migaloo all week.

As the Winter waters of Antarctica become too cold, he seeks out warmer climes to mate, before making the return journey.

One of only three out of 30,000 white whales known to be in existence off the east coast put on a show while thrashing his unique dorsal tail 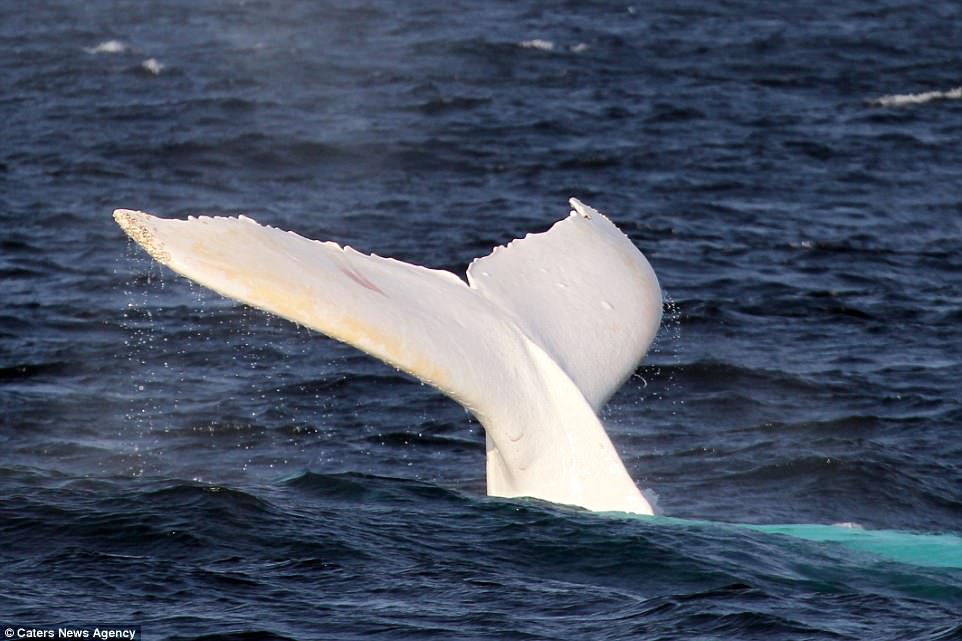 Pacific Whale.Org wrote on their blog:

’In 1993 Pacific Whale Foundation researchers encountered this amazing white whale in Hervey Bay, Queensland. During this encounter we were able confirm the whale was all white and in 1998, we recorded the whale singing, a trait distinct to male humpback whales.’’

This was confirmed by scientists at Southern Cross University through Genetic testing in 2004. Migaloo has several physical traits that scientists can use to confirm his identity. They are able to confirm it is him with markers such as the dorsal fin on his back, which is slightly hooked, and his tail flukes that have a distinctive shape with spiked edges.

The blog continued: ‘’After sharing our remarkable discovery with the public, there was an outcry to ‘name the whale’. It was decided that the naming of the whale should be done by the elders of the local aboriginal collective in Hervey Bay. Ultimately they named this animal “Migaloo” or “white fella”. The elders explained their connection to all white or albino animals and that they appear on earth to be respected and revered; that their unique color demonstrates the need to respect all forms of life even if they appear different than ‘normal’.’’

The humpback whales are slowly making their way up the east coast of Australia – keep a look out for this big fella! He should be joining them soon 😁🤞 repost from @whale_soundzzz

“It doesn’t appear that he has had any issues with predators and he has an expectation to living as long as 100 years, which is the generally-believed life expectancy.

“Reports of his sightings have been available for just about every year of his life and so he has been very useful in cataloging whale movements. Those sightings are very valuable in confirming migratory timing.”

Everyone at The White Whale Research Centre is jumping for joy! After carefully analysing the photos of a mysterious ‘white whale’ spotted very early in the season off of Port Douglas, it appears to actually be the big guy himself – #migaloo!! Photos of migaloo’s tail fluke were taken by @wavelengthreefcruises on Wednesday, which were able to be compared to those taken of migaloo previous years. It’s hard to believe, since this time in 2015 he was near New Zealand! To be so far north this time of year is both strange and very interesting. Thanks to crew onboard Silversonic for the photos taken on Friday of migaloo breaching #whitewhale #humpbackwhale #humpback #portdouglasdaintree #exploretnq #gbrmarinepark #thisisqueensland

These laws were put into place because Migaloo’s fans act irresponsibly in their excitement to see him and he was struck by a boat in 2003 which resulted in him getting scarred on his back. According to Queensland’s laws, the tour operator’s vessels are not allowed within 500 meters of the whale when he finally gets to Australia. Vessels can be fined up to AU $16,500 (US $11,298) if they break the rules.

Migaloo wasn’t initially considered albino because his eyes are brown and not the typical red or pink associated with albinism, and was called ’all-white’, or ‘hypo-pigmented’. However, in 2011, researchers at the Australian Marine Mammal Centre studied his DNA and found a genetic variation leading to albinism which confirmed that Migaloo is in fact a true albino.

Norway Refuses To Do Oil Exploration In Arctic, leaving ‘Whole Industry Surprised And Disappointed’ Previous post
Photographer Traced People He Photographed In The Street 40 Years Ago To Recreate Their Pictures (30 Pics) Next post