As we already said, everyone deserves a second chance. Everyone deserves to be loved, especially abandoned animals! They require so little and give you so much – unconditional love for as long as they live!
The look in their eyes after they have been rescued and offered a home shows enough of how grateful they are, and trust me, there are few things in life that can be as rewarding as this.

Seeing the transformation these rescued kittens experienced is a proof that love can move mountains. So check out this beautiful and heartwarming transformation, and hopefully, they’ll inspire you to do the same and give yourself a worthy companion during these lockdown times.

1# My Wickett, First At 3 Weeks Old When He Came In As A Foster, Then 12 Weeks After I Adopted, Then His First Birthday And Today 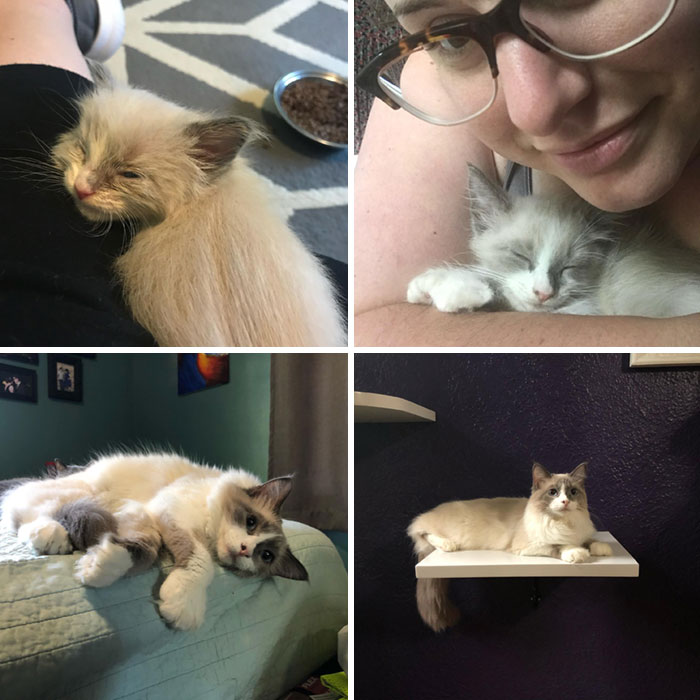 Louise Lee, the media officer at the non-profit Blue Cross For Pets organization, which specializes in animal adoption in the United Kingdom, speaking of if more people are willing to take the “adopt, don’t shop” approach these days,  luckily, it seems so. “We rehomed over 9,000 pets last year, which has increased significantly since a decade ago.”

The stigma of rescued cats is slowly fading away. “Such misperceptions that these pets were all given up because of behavior and that they’re ‘broken’ are gradually changing, and people understand pets are handed over for all sorts of reasons,” explained Louise.

Louise said that “we’re working hard not only to change the perception of pets in rescue” but also to help people who can’t cope with their pet. “We seek to take the ‘shame’ away from people who are struggling to cope with their pet and decide to rehome or their circumstances change.” As a result, the adoption assistance team at Blue Cross never judges anyone.

But the pet adoption expert warns that it’s important to get the whole family on board when it comes to adopting an animal. “Make sure everyone in a family wants a pet and understands their responsibilities, the time needed, and financial commitment before getting a pet.” Even if taking in a pet will surely have an effect on your lifestyle, it really pays off seeing your kitty happy.

2# Rah And Luna, From “Dumpster Kitties To Laying Pretty” 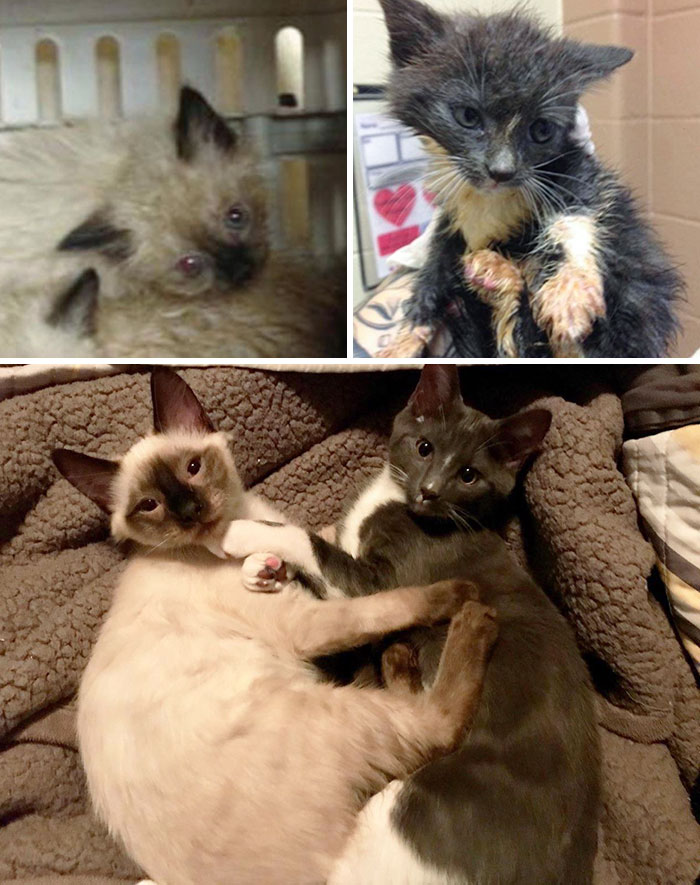 3# Exactly One Year When I Rescued Him. He Had A Lot Of Medical Problems And Almost Didn’t Survive When He Had FCV. He Is Now A Healthy Whiny Lil Baby With A Small Head 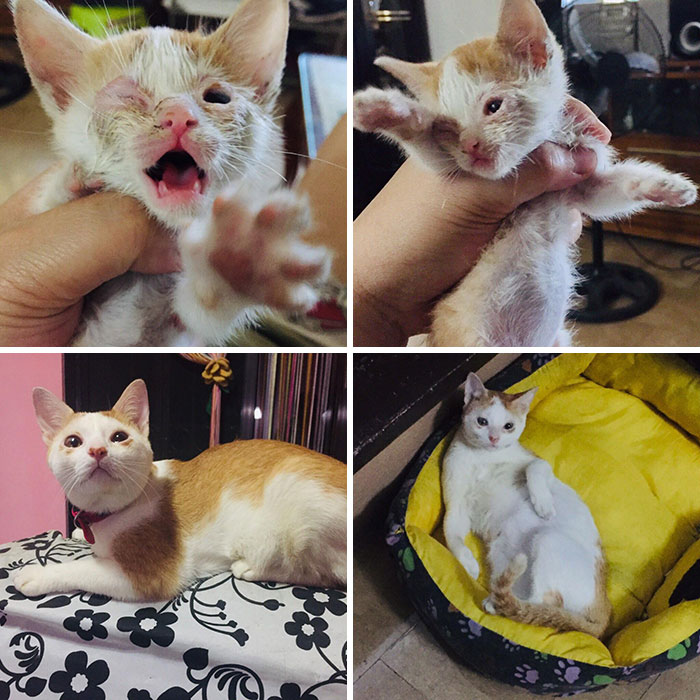 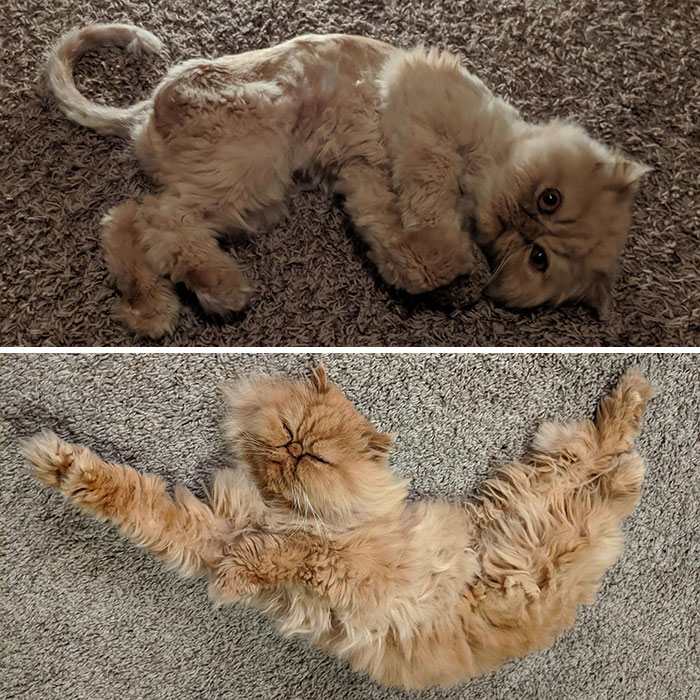 butterybreadbuns – He was given up by his previous owners and spent 4+ months malnourished, matted, and uncared for in a shelter, even though he’s the sweetest and most gentle cat I’ve met. I’m grateful for every day that I get to spoil this kitty.

5# Peter The Cat On The Day My Daughter Rescued It From A Ditch, And Four Years Later 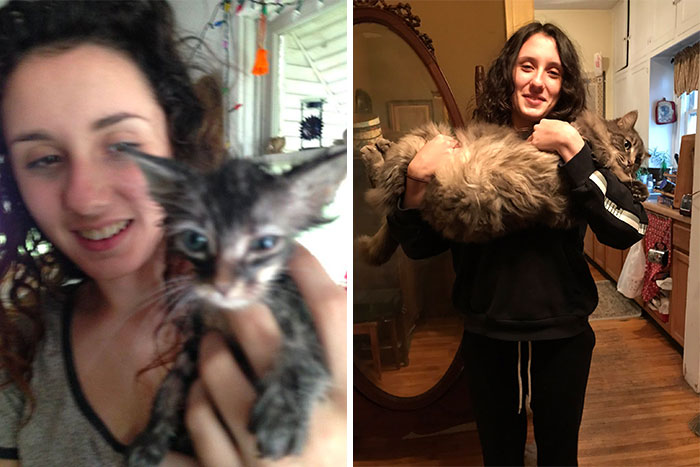 6# I Adopted A Stray Cat 3 Months Ago. She Was Very Weak And Couldn’t Stand On Her Own Legs. But She Was Truly A Fighter. Meet Katie 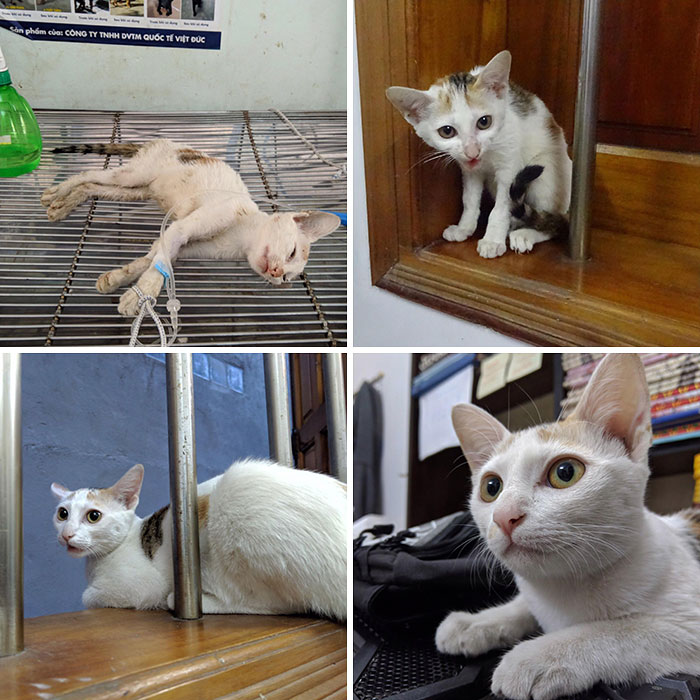 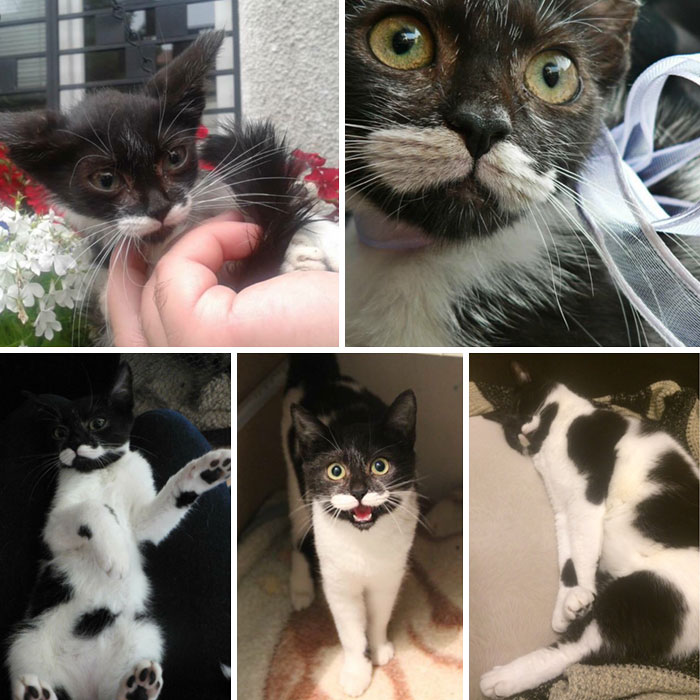 8# In The 1st Pic Is My Boyfriend’s Cat When He Found Her In The Rain Meowing Alone, 2nd Is A Few Days After He Cleaned And Fed Her, And 3rd Is Her Today, Six Months After He Found Her 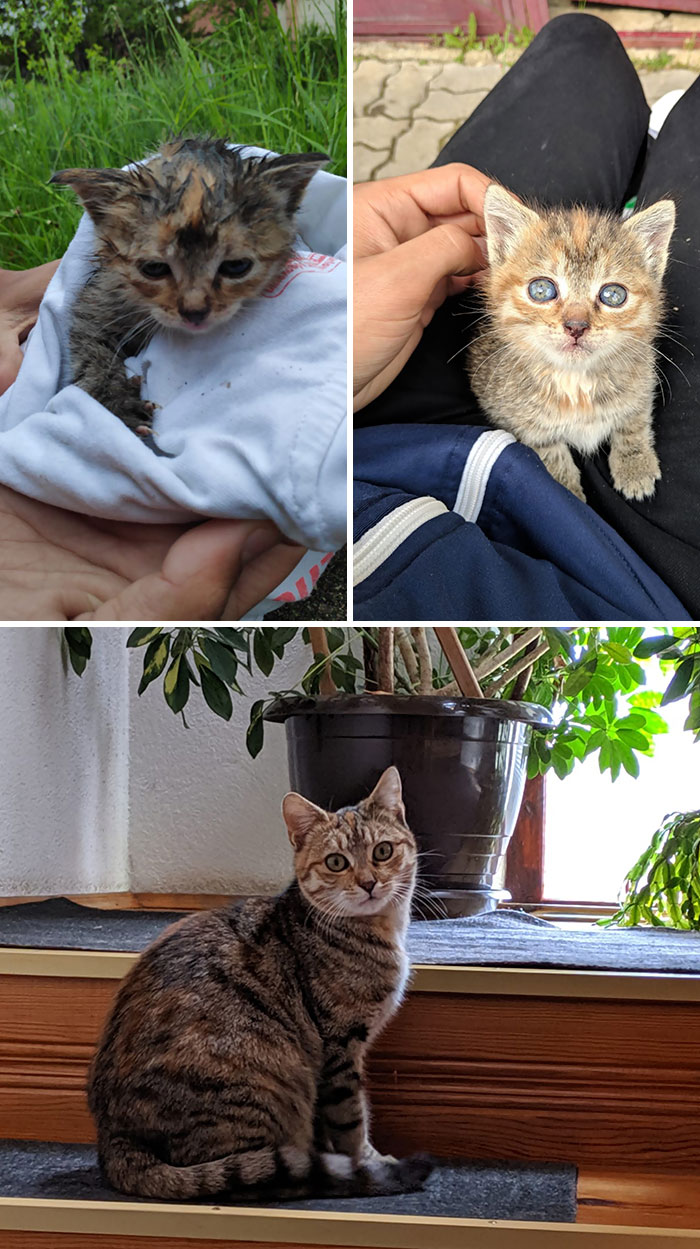 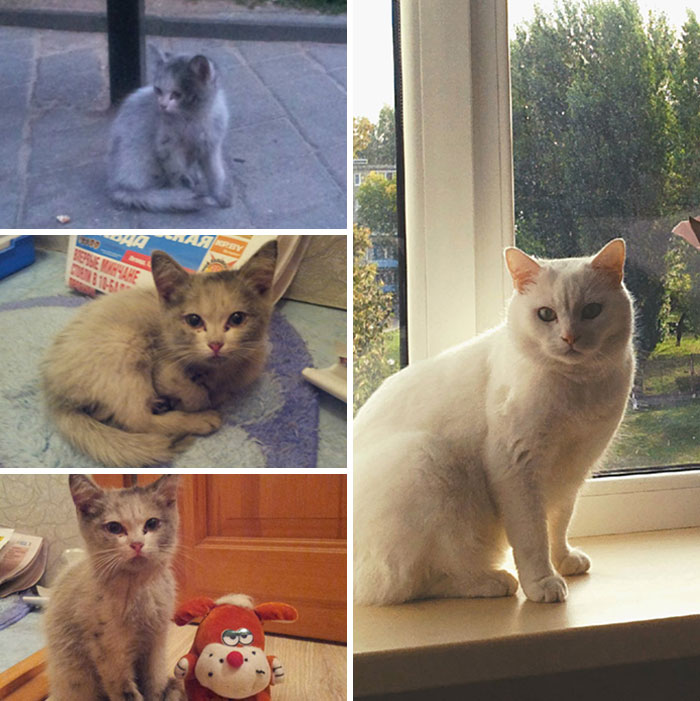 10# Meet Frankie! Adopted Him From The Shelter Six Weeks Ago. Now I Know Why Parents Say “They Grow Up So Fast!” 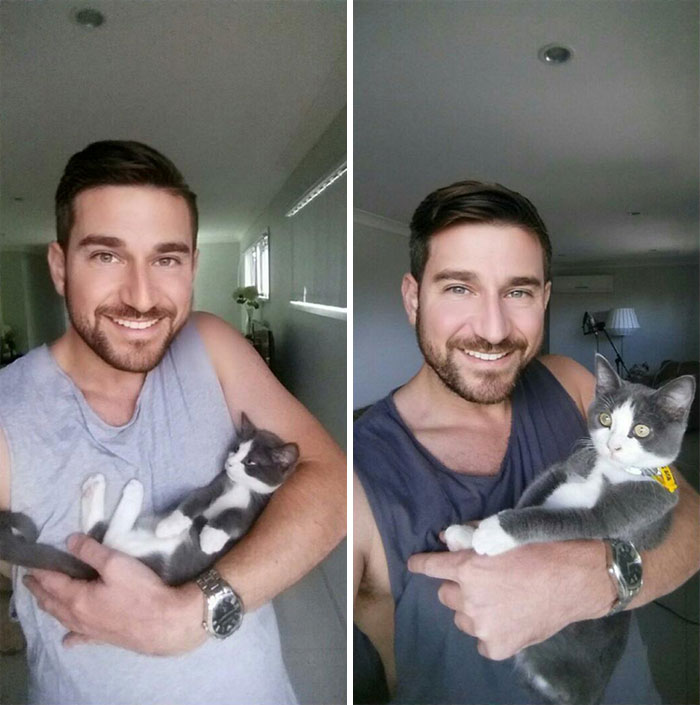 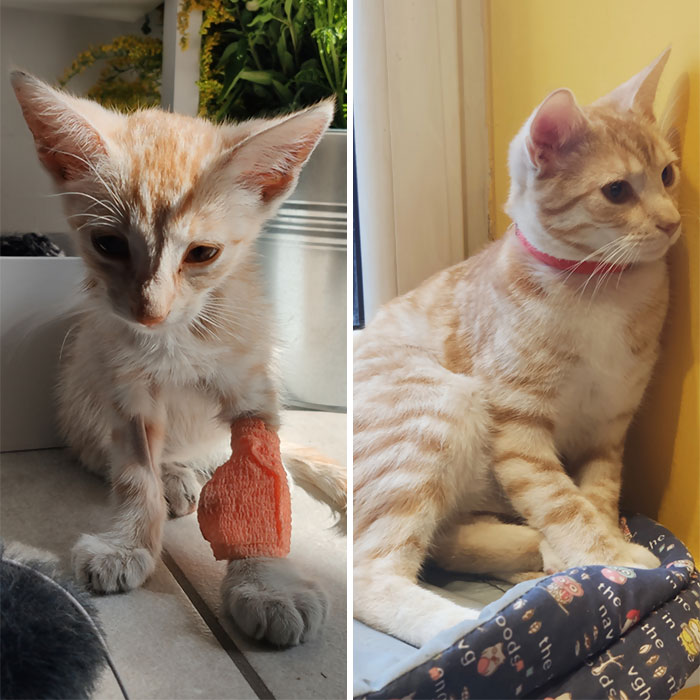 12# My 96g Hand Rear Boy Made It! He’s Now 2kg And Almost 4 Months Old. He And His Rescue Sister Have Given My Life Meaning 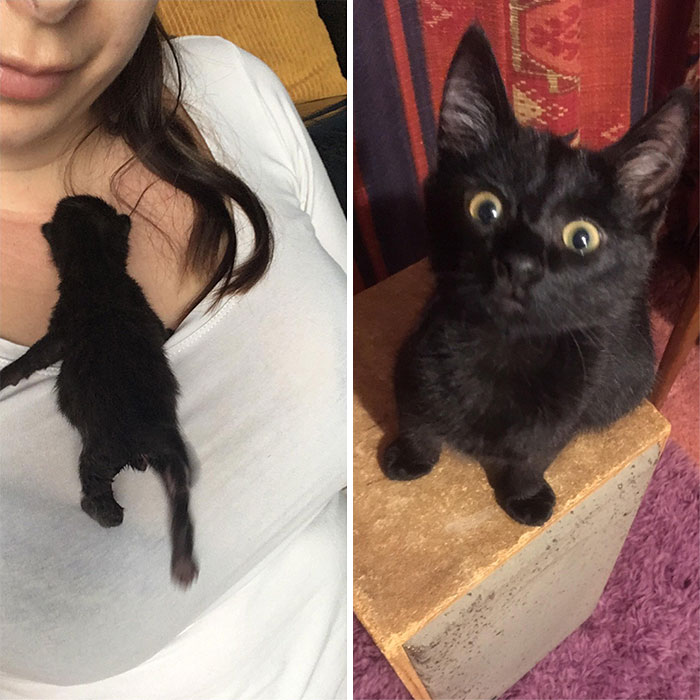 13# Just Got This Before Pic From The Shelter. From A Stray In Thailand To The Queen Of Our Apartment, Meet Connie 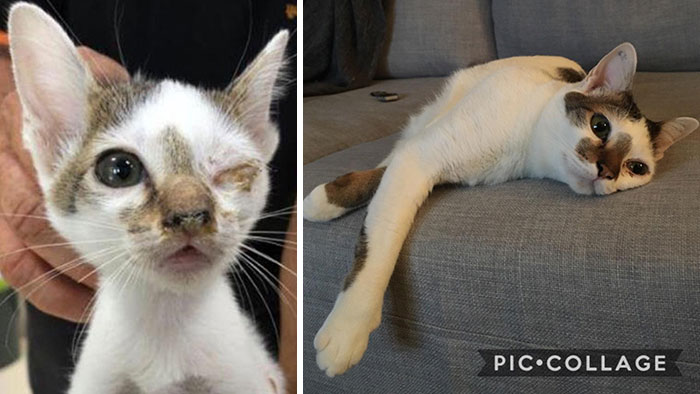 14# Cat Foster Family Said “Don’t You Want To Adopt These Two? They’d Be So Happy Together.” They Were So Right 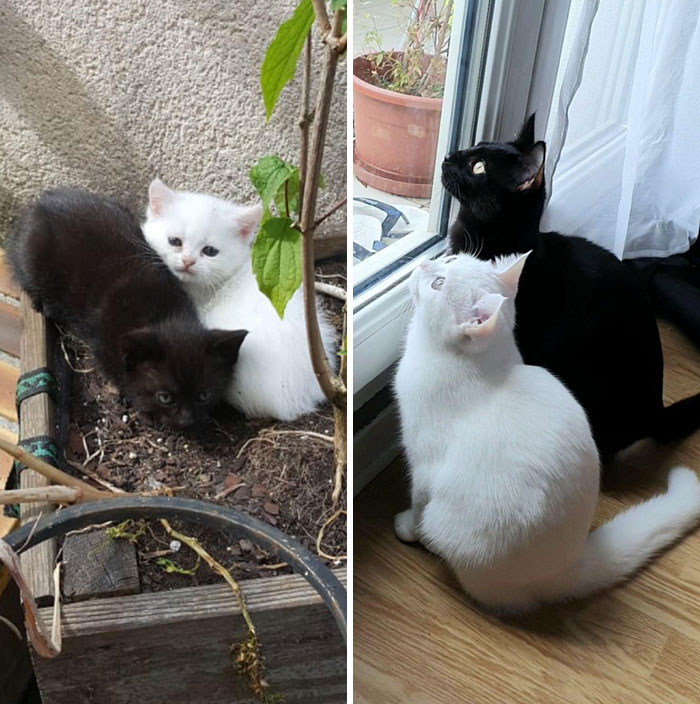 15# Pugsley The Rescue Cat Before And After. It’s Amazing What A Little Love And Some Strong Antibiotics Can Do 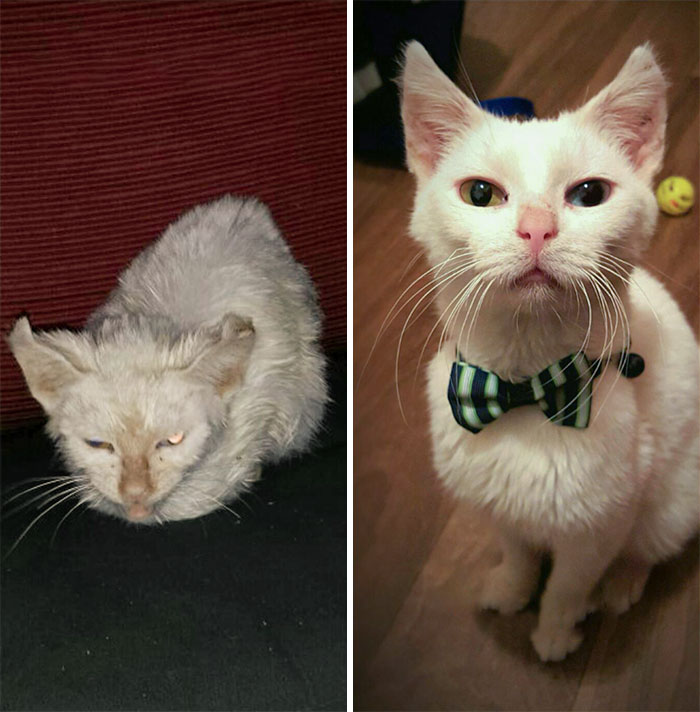 16# From A Scared And Starving Kitten Found Under My Boyfriend’s House, To A Fat And Curious Little Hell Raiser 6 Months Later 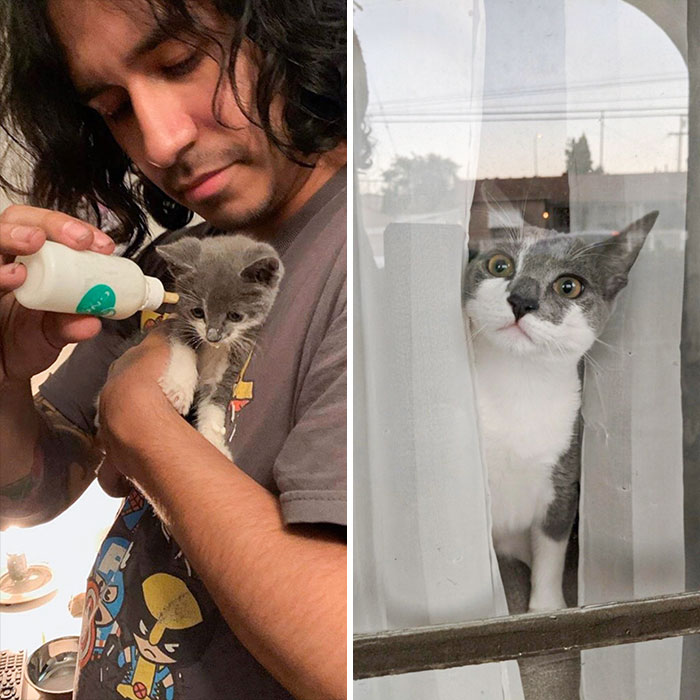 17# This Is 1.5 Years Old Pelle. I Became His Momma When His Cat Momma Didn’t Want To Take Care Of Him 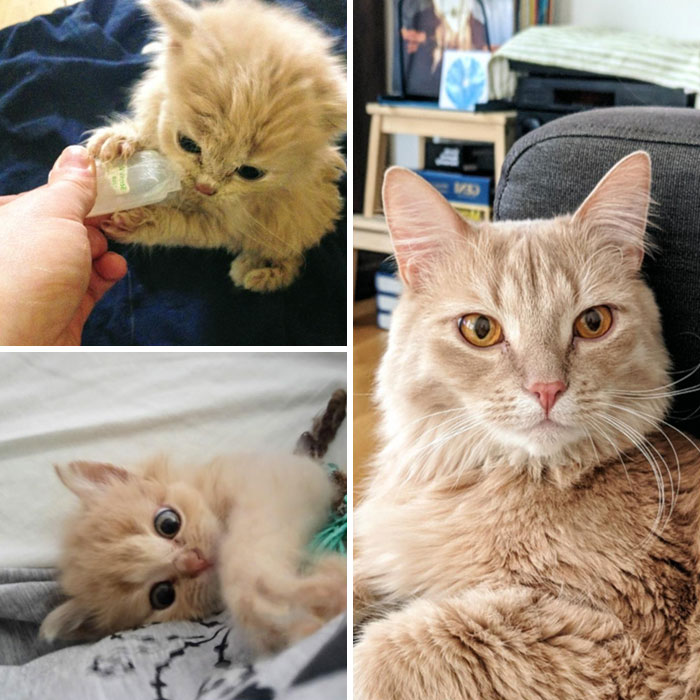 18# I Found Chelvin Very Sick And Malnourished Just Outside My Neighborhood. He Was Only A Few Weeks Old. Three Weeks Of Love And Care Went A Long Way 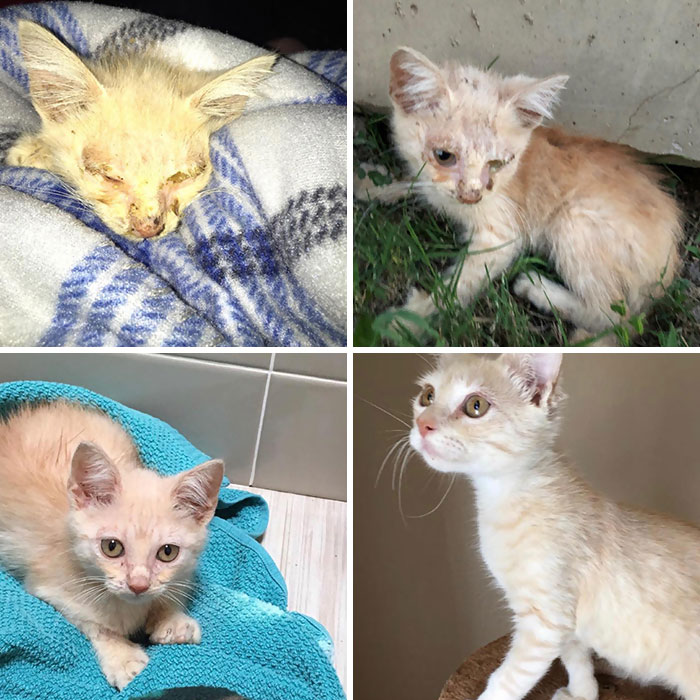 19# Took A Stray Mother Cat And Her Kittens Home. A Month After, She Has No More Mange Problem And I Have 3 Fat Kittens Too 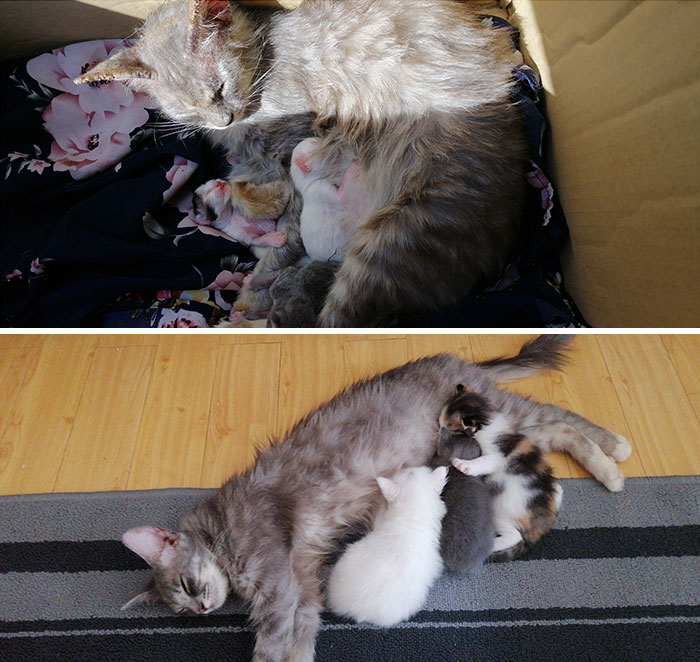 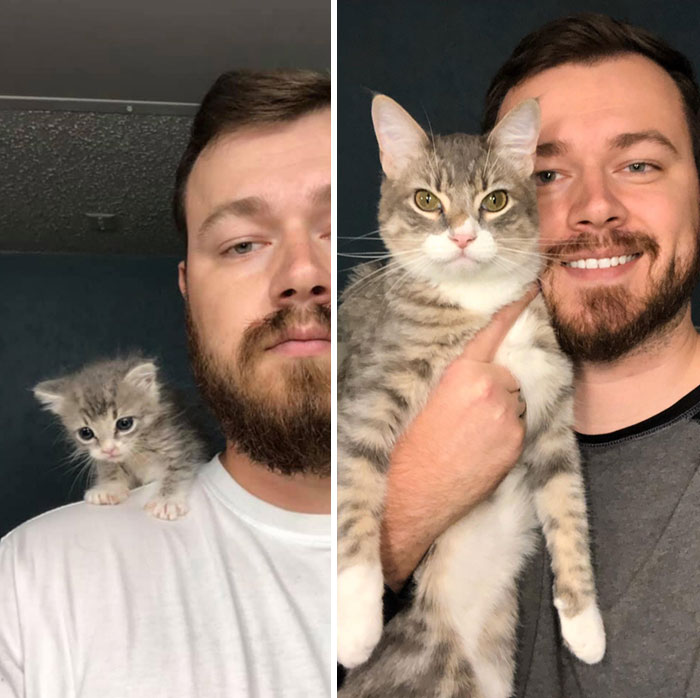 21# My Dad Found This Cutie Alongside The Road While Working. I’d Like To Say He Lives A Spoiled Life. October Vs. Now 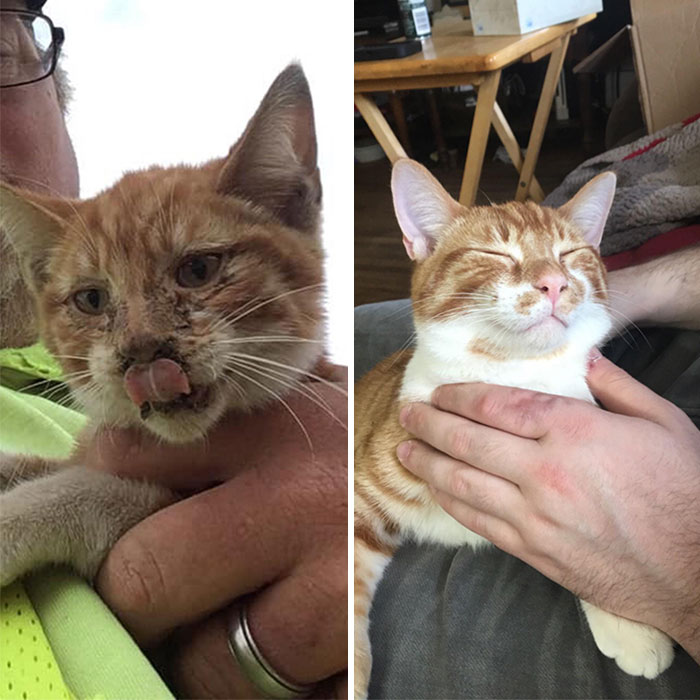 22# Little Man Rescue Almost One Year Ago And Today 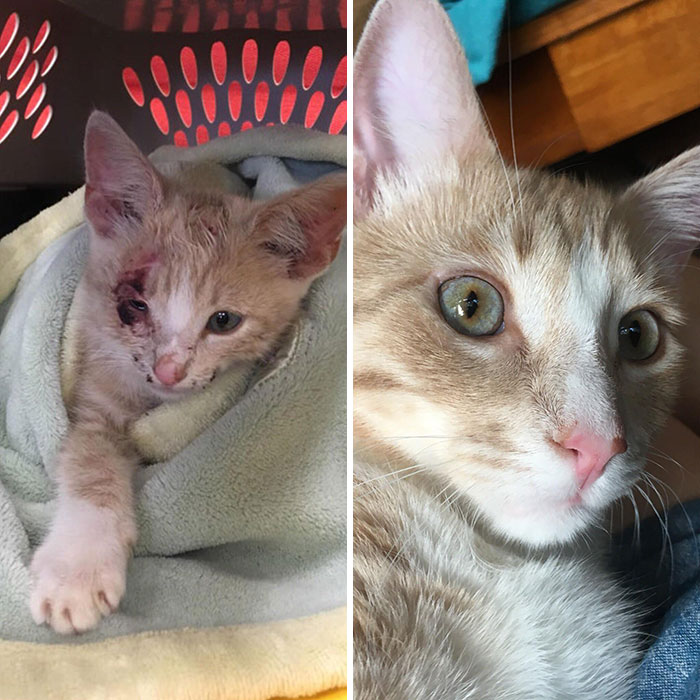 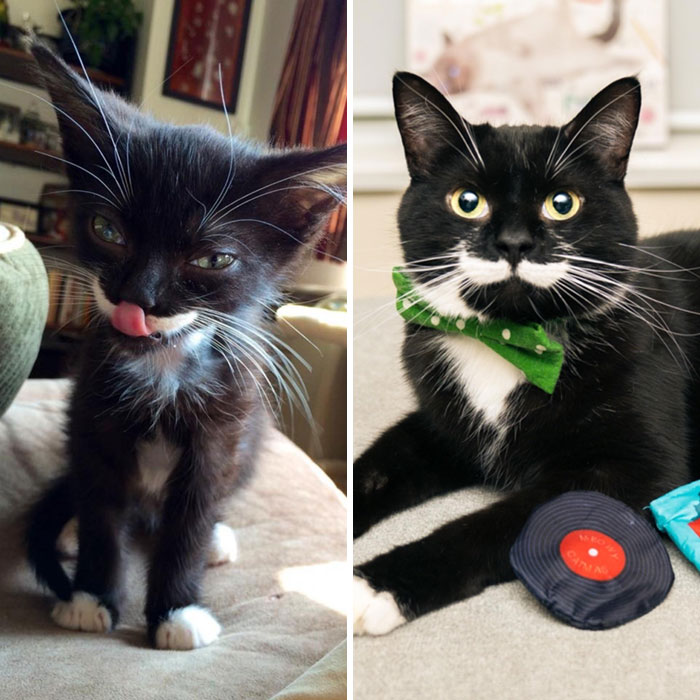 24# One Year Ago When I Rescued Her And Now, Showing Gratitude 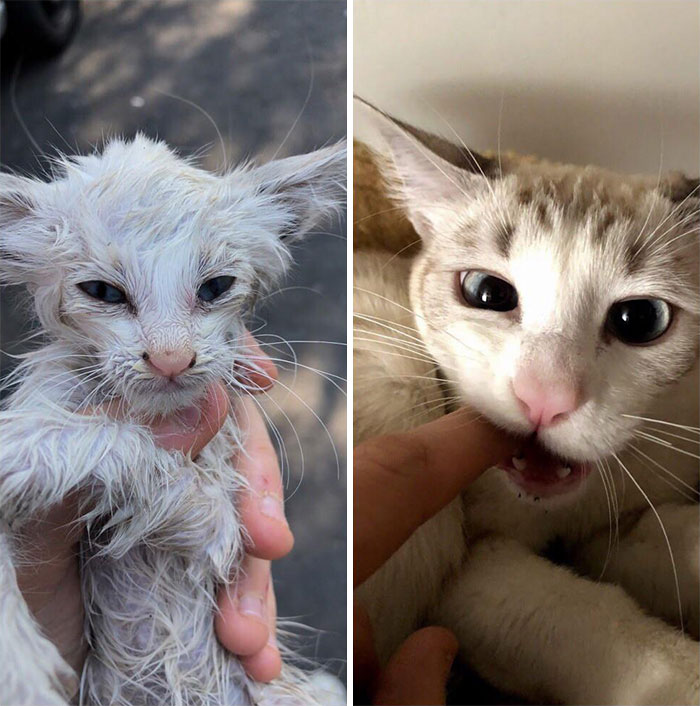 25# My Sweet Boy Keller. I Would Die For Him 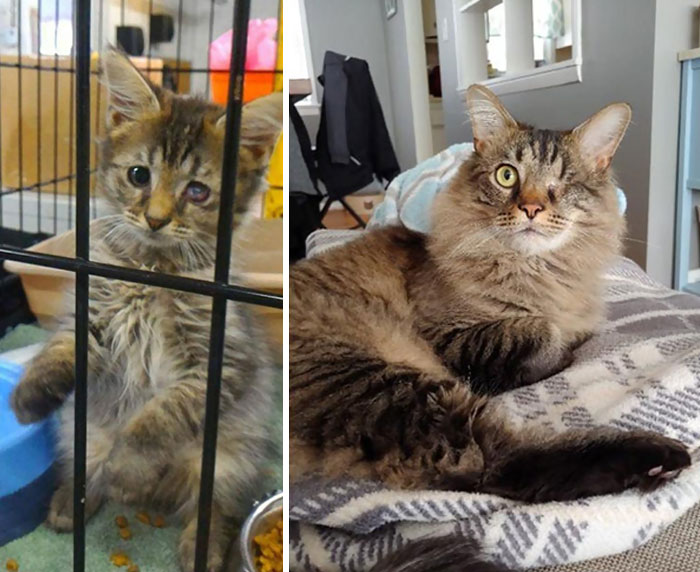 26# This Is Leo And We’ve Been Besties Since 2012. He Was Born Under My Stairs, And I Rescued Him. We Love Each Other Very Much 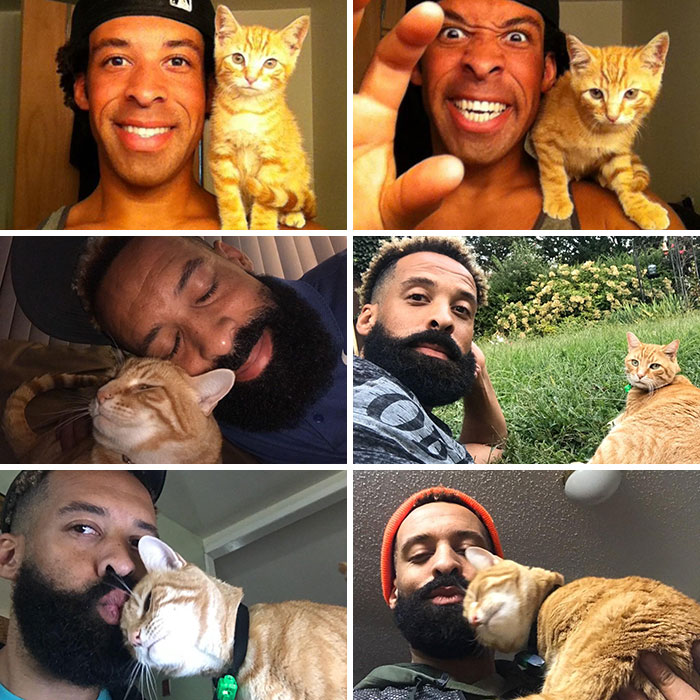 27# It’s Almost A Year Since My Friend Brought Home A Rescue Kitten, So She Decided To Recreate The First Picture She Took Of Him 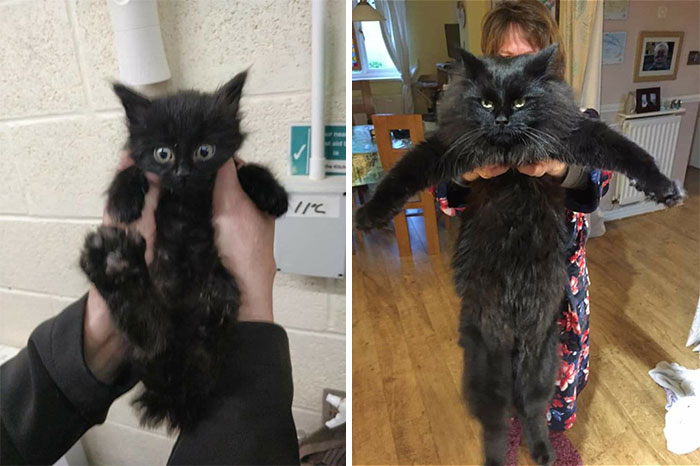 28# The Difference A Rescue Can Make 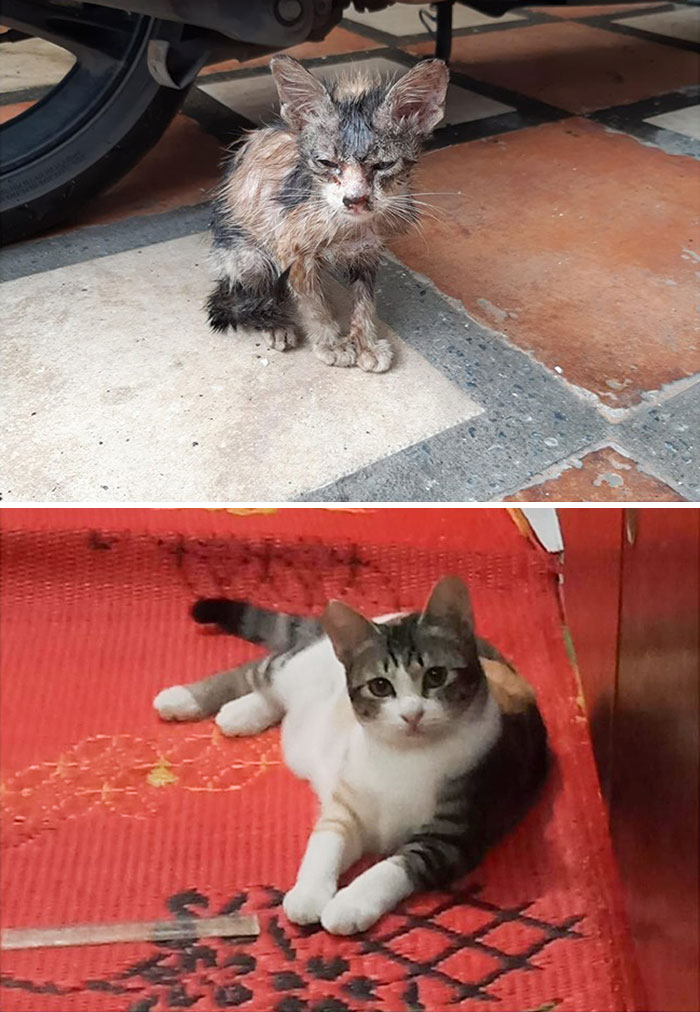 29# My Wife And I Rescued This Sweet Little Girl Last July. This Is Her Now 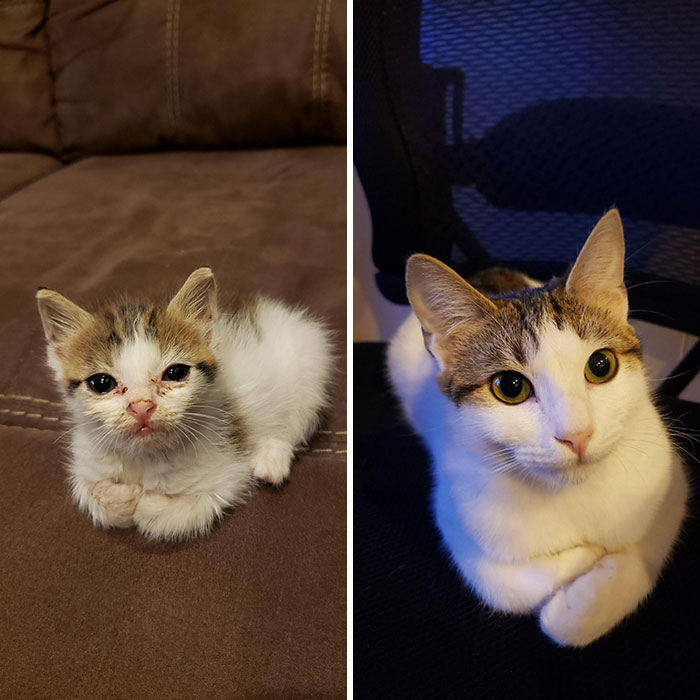 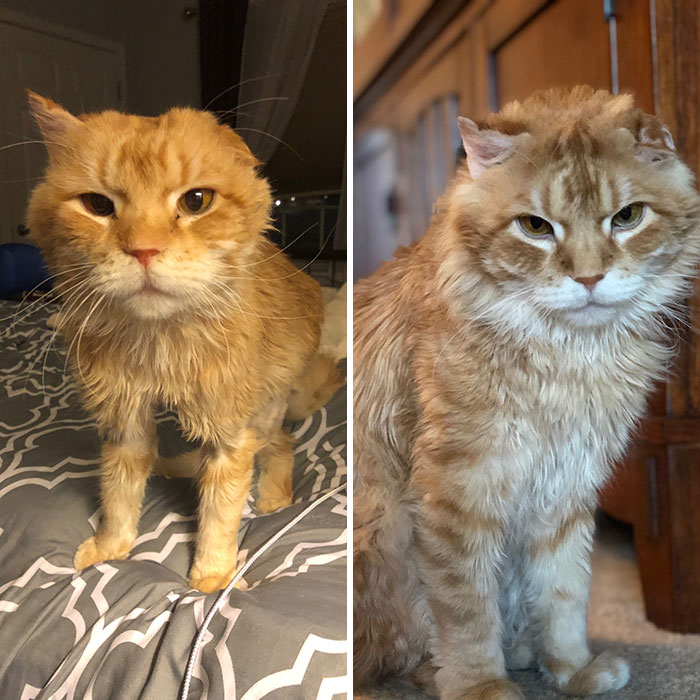