As you’re prepping your Thanksgiving feast, you might take a page from New England’s migratory birds. Turns out, these feathered creatures are health-conscious locavores.

A new study published in the journal Biological Conservation finds that given the choice, birds traveling through New England will almost always opt for native fruits like blueberries and raspberries over invasive ones like Asian bittersweet and multiflora rose — even when the latter is far more prevalent.

Previous research has found that native fruits are more nutritious than their invasive counterparts. “They can’t be eating ‘fast food’ before they take off on really long migrations,” says ecologist Amanda Gallinat at the Utah State University, who led the new study. “They need something with high energy.” 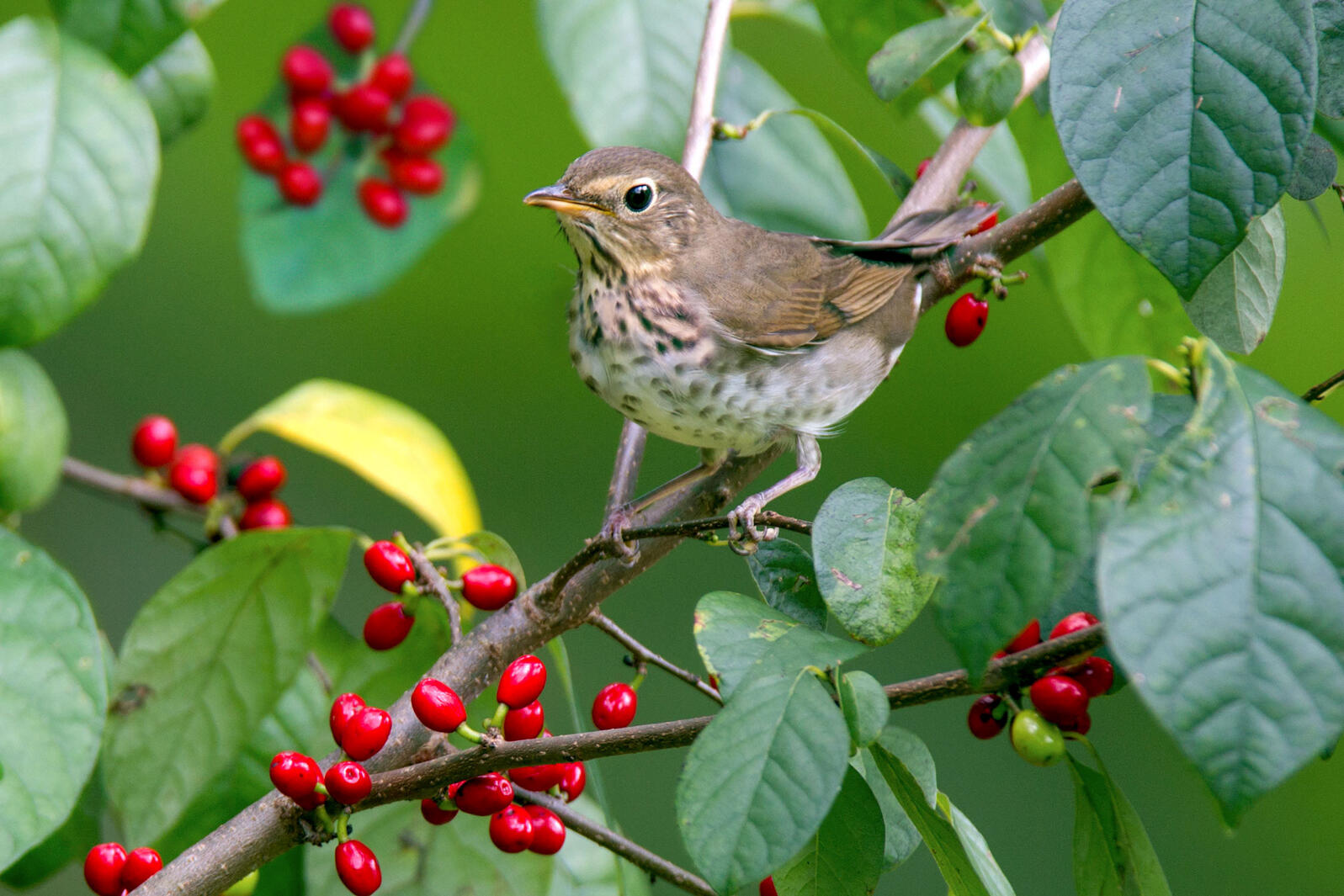 Jeff Ritterson, a field ornithologist at Mass Audubon, calls the finding “a great contribution to the literature on how climate change is affecting our bird populations.”

A hermit thrush, which migrates in late autumn thanks to climate change, increasingly encounters invasive fruits like the multiflora rose above. But the birds don’t really eat them, the study finds. (Courtesy Jeremiah Trimble)

“Understanding how climate change influences the complexities of the natural world is an important first step in developing appropriate conservation measures,” he says. “These complexities include food availability and preference, and how that may contribute to the spread and associated habitat degradation caused by invasive plant species.”

Gallinat, who is now at Utah State University, says her interest in bird diets began a few years ago when she was a doctoral student at Boston University and helped a colleague research whether climate change was affecting birds’ migration.

“We found that birds are delaying their migration, and particularly doing that in response to warming temperatures,” she says. “In thinking about this, I realized that … would probably affect what fruits were available when birds were migrating through New England.”

We were genuinely surprised by how strong the preference for native fruits turned out to be. 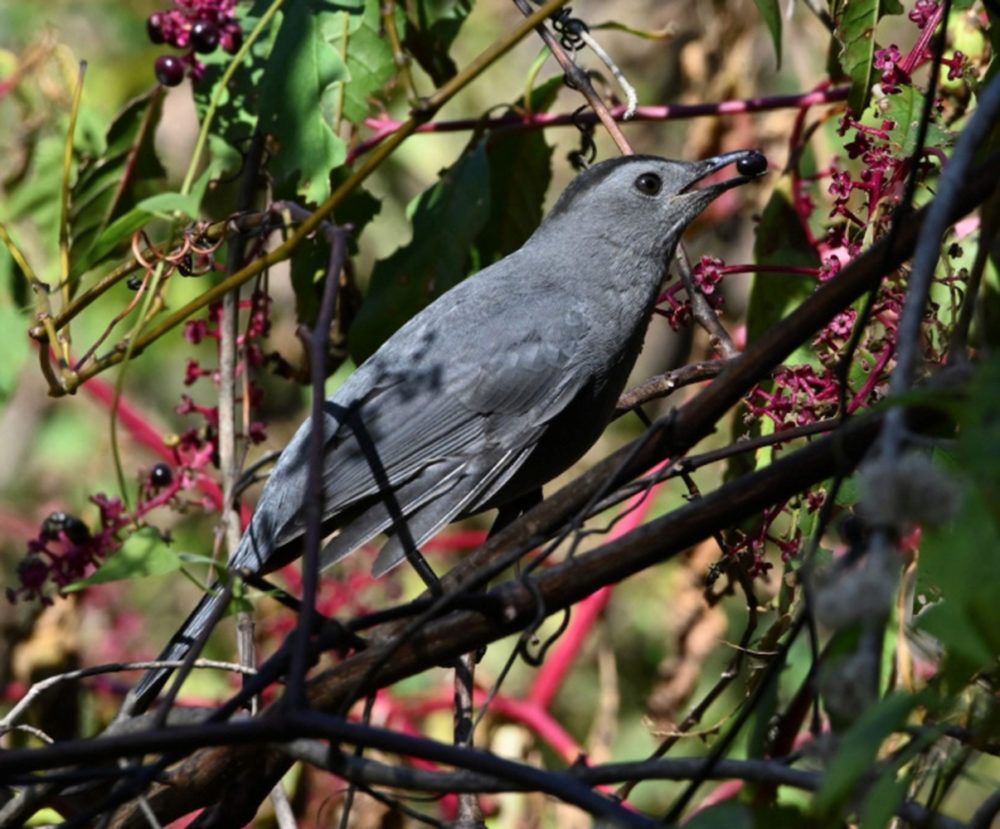 There’s some research about how climate change is affecting bird diets in the spring months, she says, but little work has been done in the autumn. So with her research partners — Richard Primack of BU and Trevor Lloyd-Evans of the Manomet Center — Gallinat tried to fill that void.

“One thing we wanted to understand was what the schedule of fruiting is like in Massachusetts and across New England. And so we went out and we monitored when plants were fruiting,” she says.

They observed 25 native and invasive fruiting shrubs and trees near the Manomet Center in Plymouth — a popular fly-over spot for migrating birds — and found that on average, invasive plant fruit three to four weeks later than native ones.

“So indeed, birds that are migrating later and later in the year are more likely to encounter invasive fruits than they would have in the past,” Gallinat said.

The next question was whether invasive fruits were becoming a bigger part of the birds’ late-autumn diet because there was less native fruit available. To test this, Gallinat turned to bird poop.

Every fall, researchers and volunteers at the Manomet Center trap and band hundreds of migrating birds. When those birds defecate, banders collect and catalog the “sample.” Gallinat would test the samples in a lab to pick out identifiable seeds. 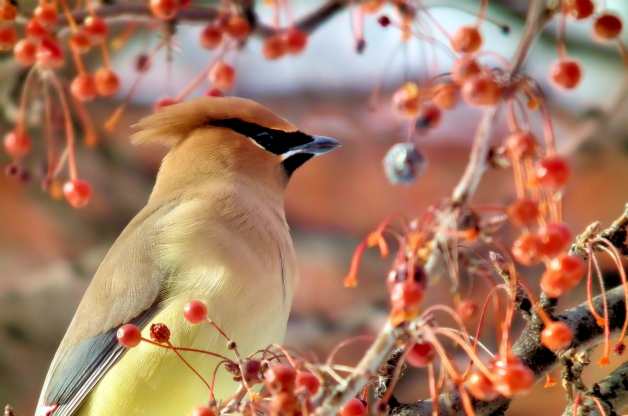 “What we found was that despite the availability of invasive species increasing throughout the autumn season, birds almost exclusively ate native fruits all seasons long,” she says. “Even when there were fruits that we weren’t finding to be ripe anymore on-site — like blueberries later in the season — we were still finding those seeds in bird poop samples.”

In other words, faced with a proverbial buffet of ripe invasive species, birds sought out the scarce native plants. Primack, the BU professor and one of the study’s co-authors, says this is probably the case because native fruits are healthier.

“We very strongly suspect that these invasive plants — like multiflora rose and Japanese barberry — have a lower nutritional content, and that’s why the birds are not eating them,” he says.

So what’s next? Gallinat says she’d like to study what birds eat during winter in New England when there are even fewer native fruits hanging around.