In a world of artificial islands (not to mention Photoshop), it’s hard to believe that this scrubby island, which looks exactly like a leaping dolphin—from the perfectly shaped head down to the curved tail—is real.

But real it is—and there’s more magic where that came from.

Italy’s Amalfi Coast is a magical destination in itself, but there’s even more reason to make the trip. A dolphin-shaped island called Li Galli is a small, private archipelago made up of three atolls between Capri and Positano. The island is also known as Le Sirenuse because of its mythological background. It’s believed that this is where Odysseus from Homer’s Odyssey escaped the voices of the Sirens who would lure sailors to their death. 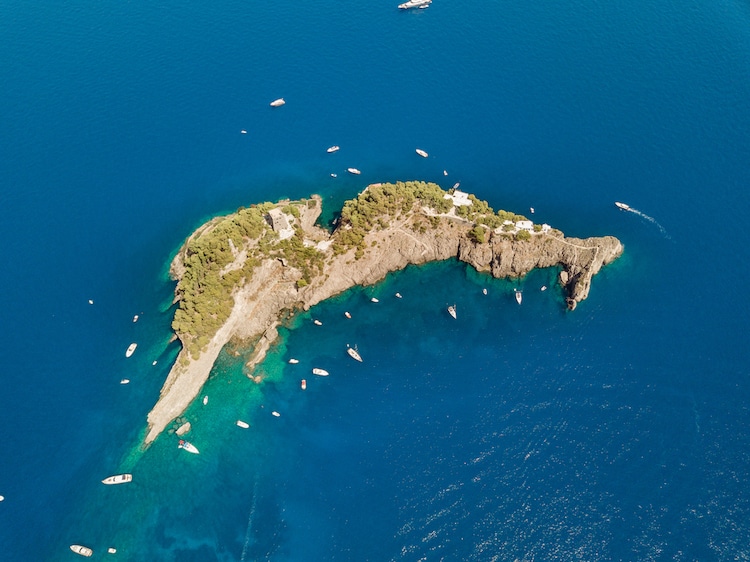 It wasn’t until the 1920s when a Russian ballet dancer and choreographer named Léonide Massine bought the ancient Roman site, bringing it to its current fame. Another acclaimed Russian dancer, Rudolf Nureyev, purchased Li Galli in 1988, nearly a decade after Massine’s death. One of the villas Rudolf redecorated has been maintained since, complete with Turkish mosaics and tiles and lavish details. Though the island has only been recently opened to the public, it mainly serves as a luxurious and private rental property for the extremely wealthy. The resort features Nureyev’s three-bedroom mansion, a ballroom-turned-villa, a chapel, an infinity saltwater pool, and more — all of which can be rented for a humble $60,400 (€55,000) to $164,800 (€150,000) a week. Though, prices could’ve even been raised since those figures were released in 2015. 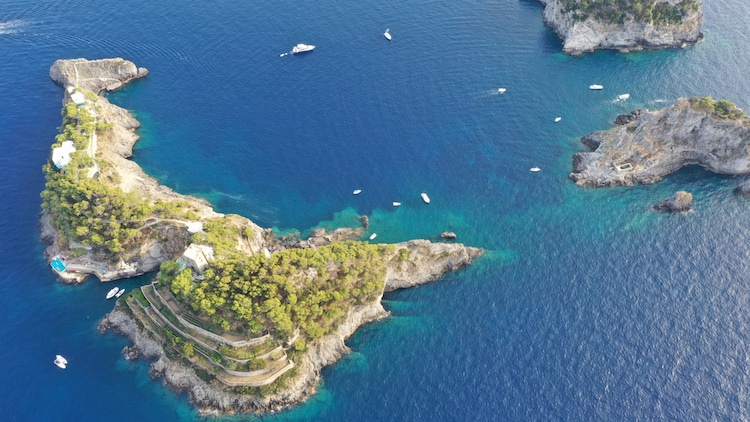 In addition to a private helicopter available for use, there’s also a motorboat and a yacht in case you get island fever. And the best part of all is your small staff there to serve your every need from breakfast to dinner, at any time of day.

Us normal people can still enjoy the beauty of Li Galli (at least for a day) from the fancy restaurant and bar. But hey, we’ll take it. If you’re looking for a more attainable island to rent, check out this private property in Belize that’s available for less than $500. See the amazing photos!

This island in Italy, located off the Amalfi Coast, is actually shaped like a dolphin. 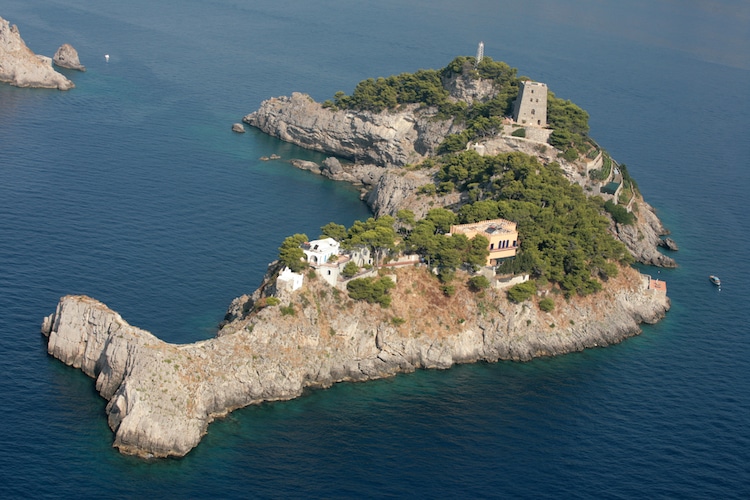 The trio of islands is also known as Les Sirenuse, which refers to the long-held belief that these rocky outposts were home to the sirens of mythology—those creatures who lured sailors to their doom through beguiling songs and other provocative behaviors (although strong currents around the islands may also have played a role in maritime disaster).

Ancient versions of the story depicted these sirens as having bodies of birds and heads of women, and the moniker “Li Galli”—which means cocks or roosters in Italian—speaks to the birdlike appearance of the legendary residents.

Used by the ancient Romans as an anchorage and later developed as a medieval place of defense with a stone watchtower, Isola Lunga entered a new phase of wonderment (and development) when famed Russian choreographer and dancer Léonide Massine purchased Li Galli in 1922, having spied it while staying with friends in Positano several years prior.

Named the Gallo Lungo, it’s part of a cluster of islands known as the Sirenusas or Gallos. 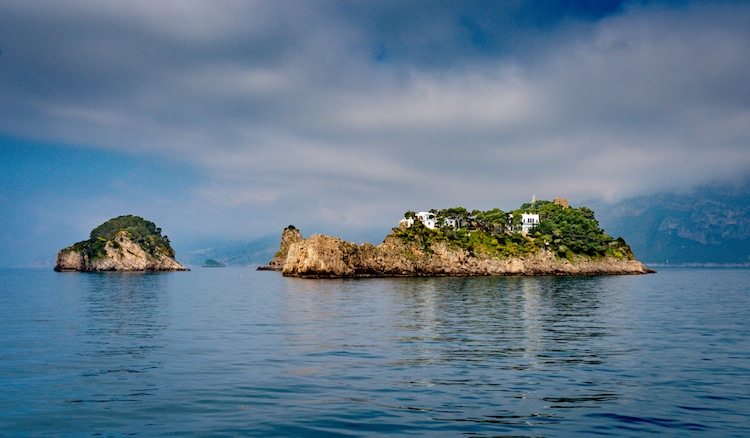 Massine slowly and lovingly tamed this wild place, famously converting the 14th-century tower on Isola Lunga into a dance studio (installing floors of Siberian pine that remain to this day) with six small bedrooms above for visiting dancers. Massine, with the counsel of renowned French architect Le Corbusier, also went on to design and erect a main villa, create four gemlike beaches, and convert an ancient vineyard into a large terraced garden. 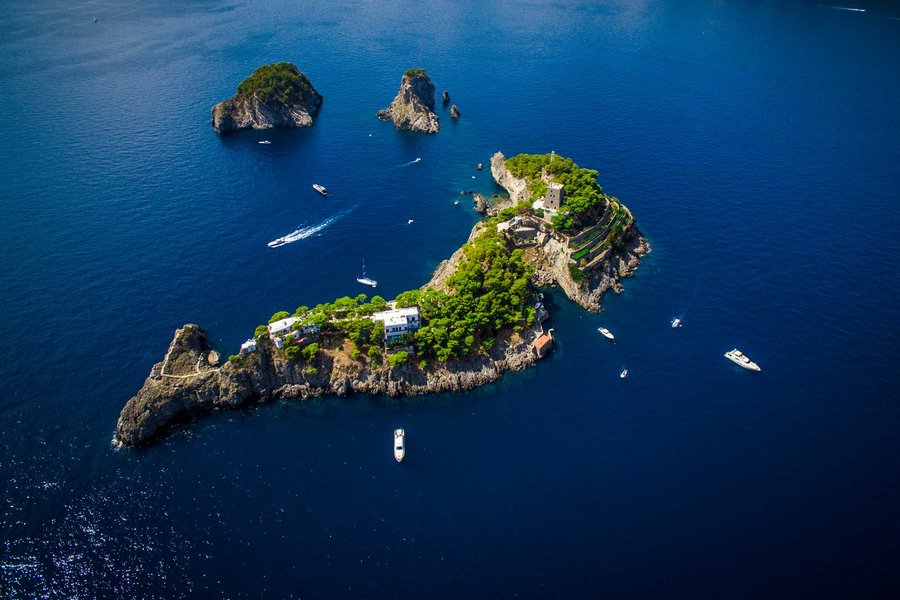 Massine’s dreams of turning his beloved island residence into an arts’ center were never realized by the time of his death in 1979, but another ballet giant took over the patronage of the magical little island. The great Rudolf Nureyev, Massine’s countryman, purchased Li Galli in 1988 and poured his own vision into the isles, including a stunning Moorish renovation of the villa in 1991.

With Nureyev’s death in 1993, the islands traded owners, and remain in private hands. Currently, the best way to experience the centuries of magic on Italy’s little dolphin-shaped island is to join one of the many local boat charters that run excursions along the Amalfi Coast and pass beneath the rocky outlines of Isola Lunga and her siren sisters. And that’s a magical, dolphin-like leap unto itself.