One of the things that’s on almost everyone’s bucket list is to see the Northern Lights. This magical display of lights in the sky is also known as the Aurora Borealis and occurs every winter and it’s the perfect way to experience the beauty of Canada!

The Aurora Village in Canada’s northern city of Yellowknife should definitely be on your list of spots to visit at least once in your life! From November until March is the best time to see the enchanting colorful lights dance through the sky.

Aurora Village in Yellowknife, Canada, provides guests with an ideal location to witness the natural phenomenon up close and personal.

Visitors are able to explore the north in all its glory via individual or combined winter tours.

For more information or to make a booking, visit the Aurora Village website. 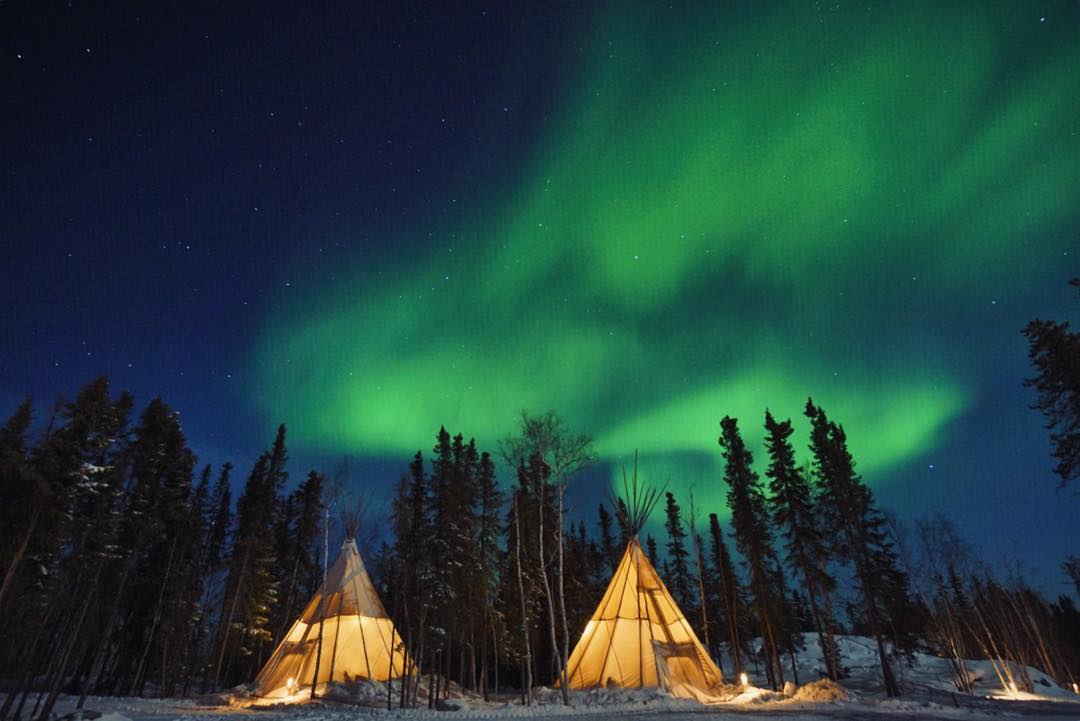 The aurora borealis effect happens in the Northern Hemisphere when the sun’s electrically charged particles, riding on a solar wind, enter the Earth’s atmosphere and collide with gases — namely oxygen and nitrogen. When the sun is at its most active is when you’re most likely to catch a spectacular display. The name comes from Aurora, the Roman goddess of dawn, and Boreas, the Greek god of the north wind. Much of Canada’s North lies beneath the Northern Hemisphere’s Auroral Oval, a hot spot for activity.

First of all, aurora borealis is elusive — which makes it all the more attractive. It’s an awe-inspiring natural phenomenon and there’s no guarantee of a show. That said, chances are good, especially in the North near the magnetic pole. The effect makes for fantastical hues, though the Lights can take all kinds of forms — from arcs and rippling curtains, to misty wisps and translucent clouds. Sometimes it’s an eerie green, sometimes it’s shimmering purples, pinks, and yellows. Green is the most common, while red is rare. The colors zig, zag, and move surprisingly quickly — some say, “dance” — across the inky, night sky. 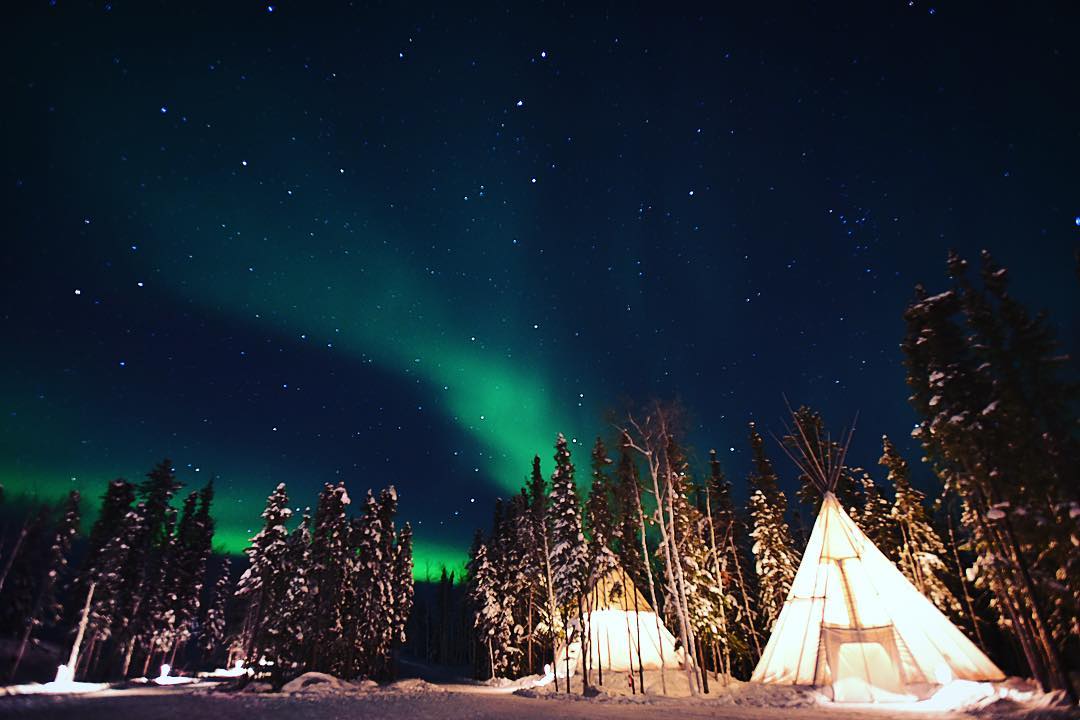 It’s possible to see the Lights (almost) anywhere in Canada during all four seasons. But the North is the best place to see them, where they are the most active, most of the time. And the best venues are remote communities with little or no light pollution. You can’t see the Lights through the clouds, so if you’re near the coast — say in British Columbia — steer clear of coastal clouds and head north. After that, you want to seek out higher ground. Winter (December to March) is often the luckiest season, thanks to more hours of darkness each day and frequent cold, clear nights. The best time? Around midnight: 10 pm to 2 am is the window, so get ready to stay up late. Though you may be able to see them in any Canadian city or province (if you’re lucky!) the following are the best spots for a sighting. 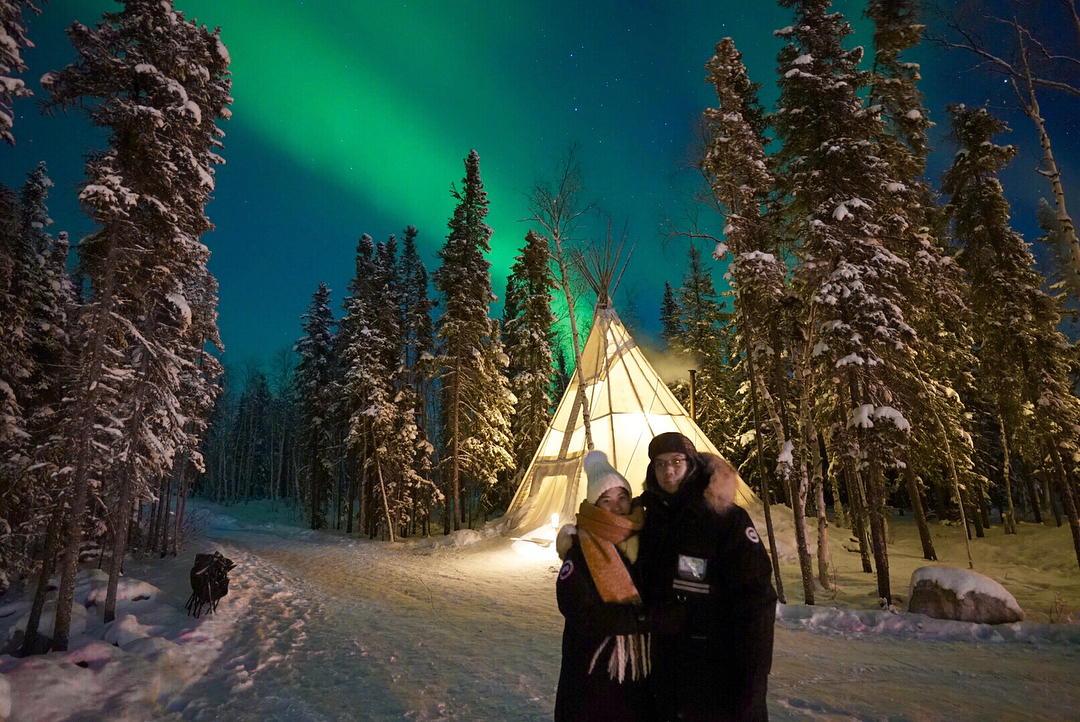 The very best place to see aurora borealis in Canada — if not the world — is the Northwest Territories, where they’re generally visible 240 nights a year. The optimal timeframe is either fall or winter (though summer is pretty good, too).

Autumn – If solitude is your thing, take a scenic bush plane ride from Yellowknife to elegantly rustic fly-in Blachford Lake Lodge & Wilderness Resort. Watch the aurora show from the deck hot tub or the dome-shaped rock out front overlooking the water. The best part? You can combine hiking, fishing, and paddling with the big show.

Winter – The Lights are especially dramatic in winter, contrasted against a frozen, white wonderland. The most convenient way to take in the show is in cozy comfort at Aurora Village, a teepee village just outside Yellowknife. Specially designed for aurora observation, the place is equipped with spacious wood-stove heated teepees, fur-lined sofas, and warmed viewing capsules that recline. 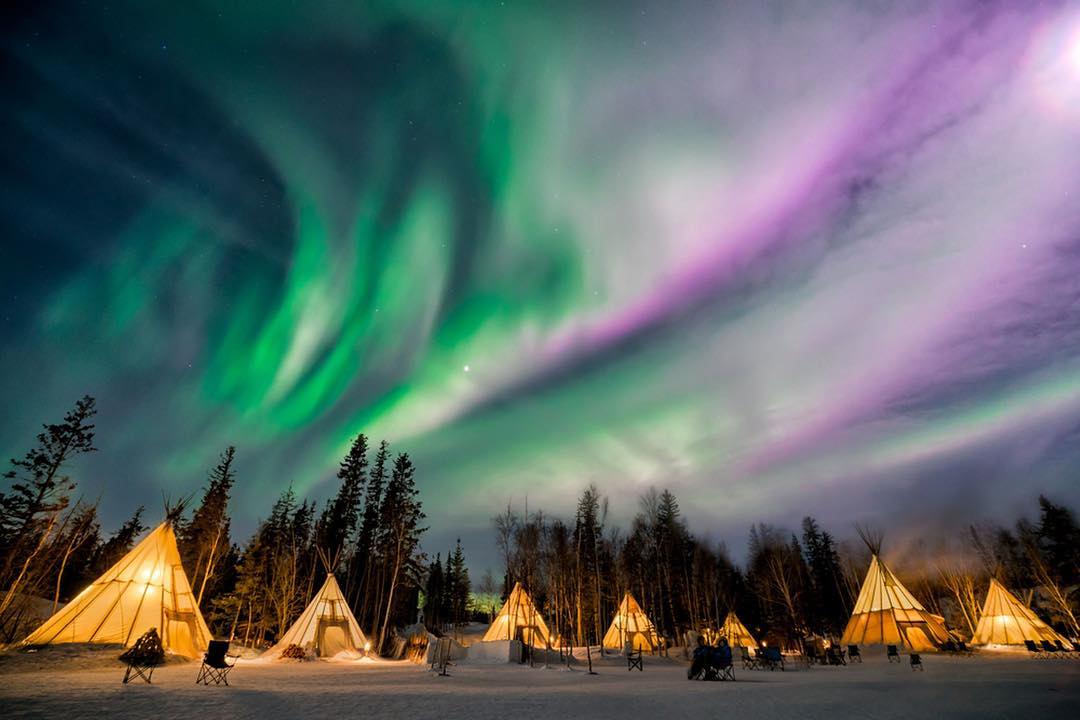 You can select from a “hassle-free arrangement“ with the company’s packages or opt for a combination of daily tours at a discount, providing you with the flexibility to organize your trip and save money. 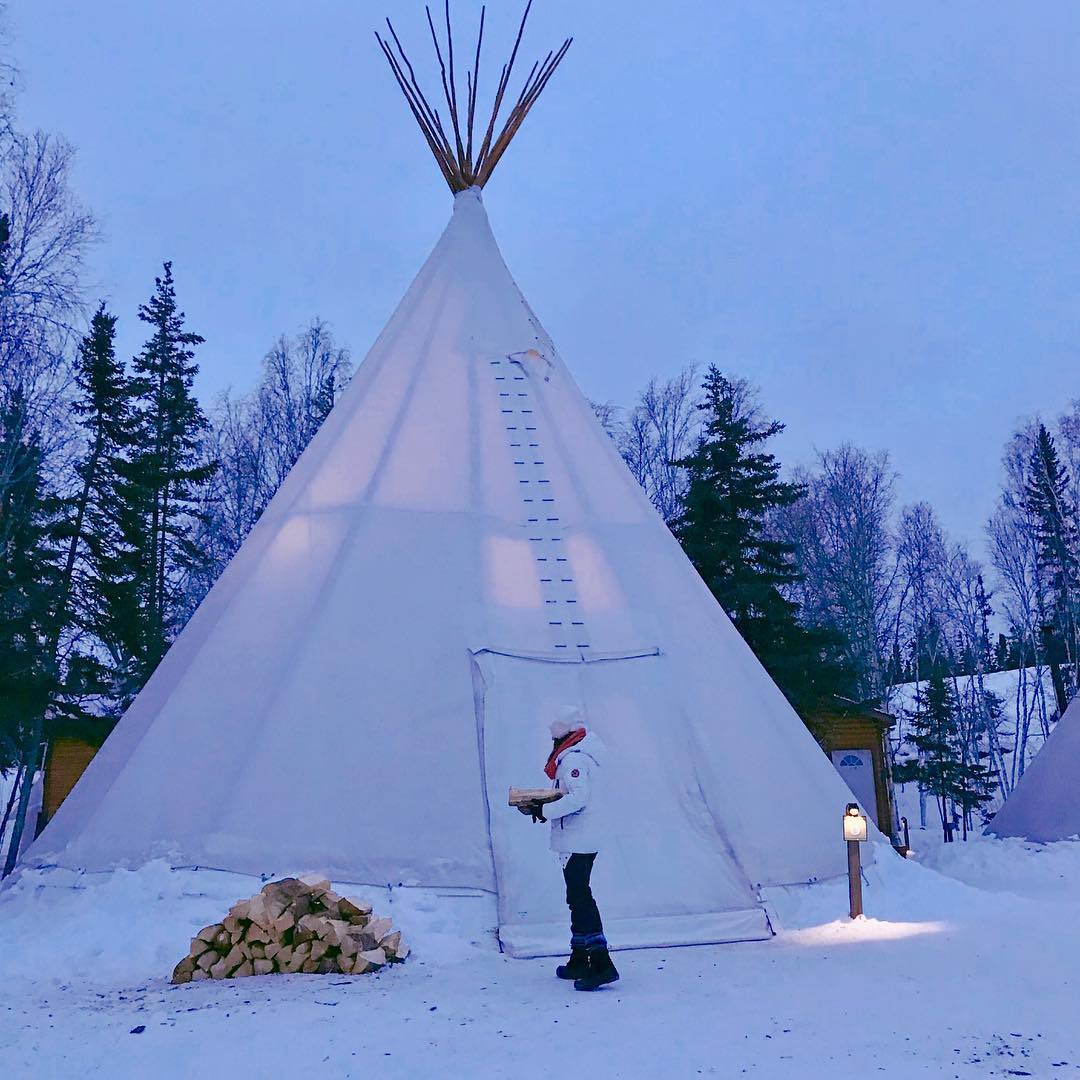 In addition to picking and choosing your winter experiences, guests can enjoy a variety of other fun activities including warming up and roasting marshmallows on the fire pit, tubing on the giant slide, and trying out traditional snowshoes, all included in the tour prices.

Since the Village opened in November 2000, it has evolved to become “Yellowknife’s premier aurora-viewing destination.”

CEO Mike Morin and his family are originally from Fort Resolution, the oldest trading settlement in the northern territories and home to mostly Metis and Dene people 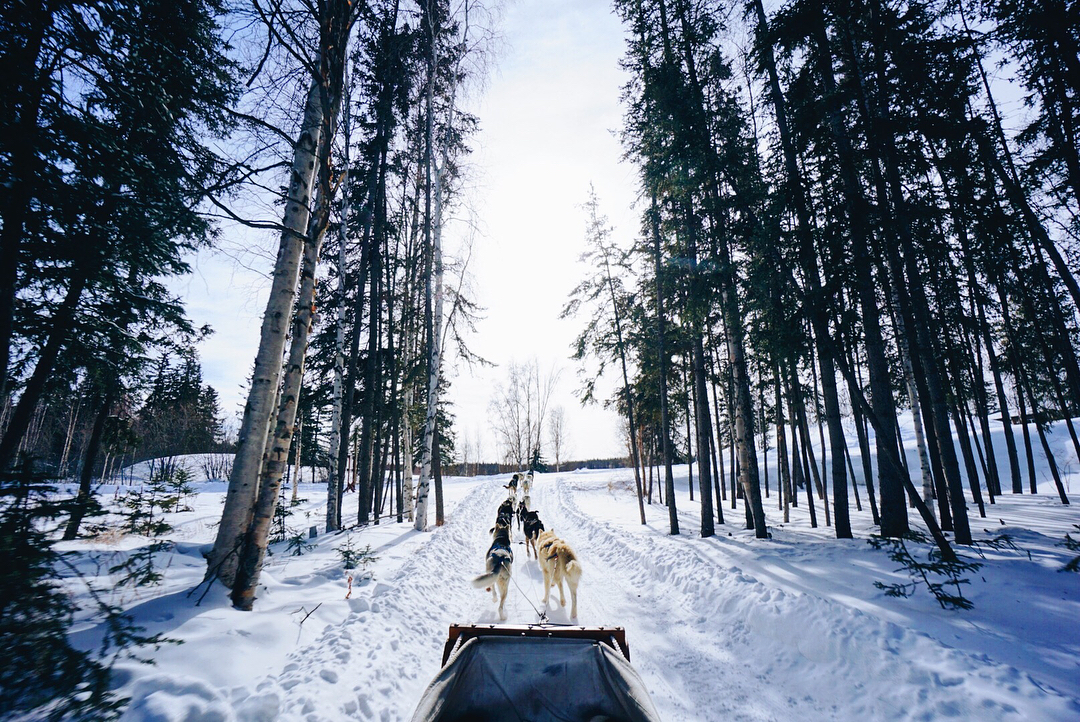 The Village is also entirely owned by First Nations peoples.

“We have called Yellowknife home for many years,” Morin says on the Village’s website. “It is our mission to share the Northwest territories Aboriginal heritage, culture, and traditions with others through Aurora Village.” 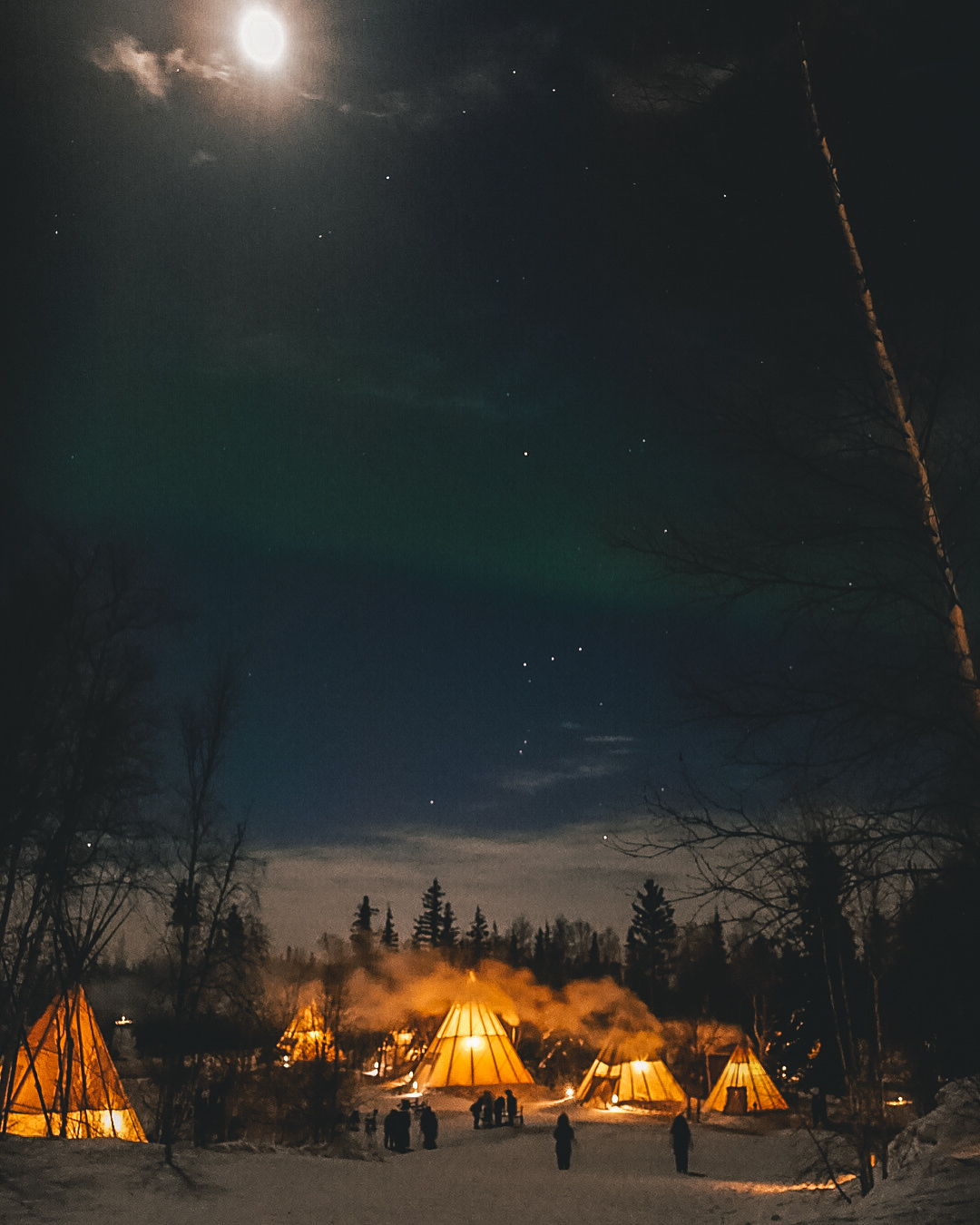 Guests that tour with the company for three nights of aurora-viewing have roughly a 95% chance of seeing the lights at least once, and 98% if they make it four nights.

Those are pretty good odds!

The best times of year to visit Aurora Village to try and see the northern lights are the summer/fall season from August 12 to October 14, or the winter/spring season from November 20 to April 13.