All of us will have seen a rainbow before, most of us a lightning strike. But have you ever seen the two combined?

.On June 13, an extremely rare double “Lightning Rainbows” spotted in skies across the UK stunned people with its appearance, as many captured the spectacular weather phenomenon on camera. Accompanied by thunderstorms and heavy downpours, the rainbows and the “powerful” lightning occurred together in the skyline due to sufficient direct sun hitting the rainfall during thunderstorms, the Met Office said in a statement. 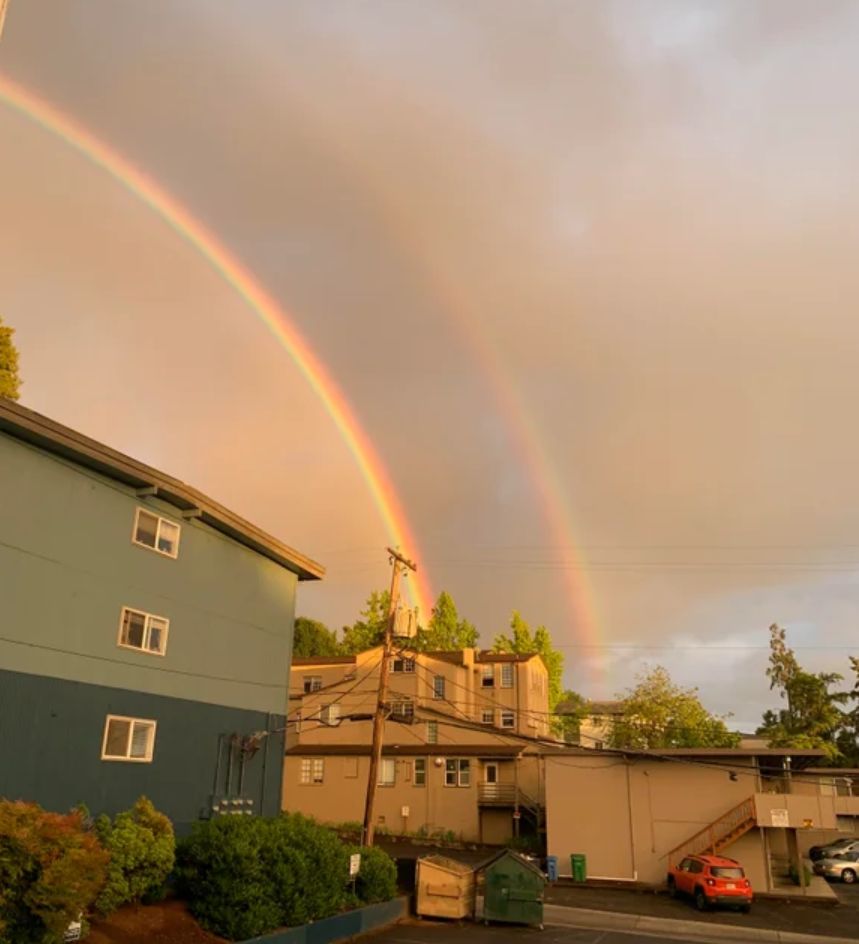 In theory, it shouldn’t be that rare. Rainbows are formed when sunlight bends and reflects inside raindrops falling from the sky. We see plenty of them when there are sunshine and showers. Thunderstorms are essentially big showers so technically they shouldn’t be that uncommon either.

Grabbing a pic of the double rainbow and managed to catch the lightning! #rainbow #lucky #thunder #Lightning pic.twitter.com/KN44MnDt1G

Residents described the sight as “incredible”, “appealing to eyes” and “quite a spectacle” while sharing the images on Twitter. A user named Nicholas Shiell shared an image of a double rainbow on Twitter with a caption, “Regardless of what’s happening in the world right now; here’s a photo of a rainbow.” Another user, Poppy Mae said she saw the “most perfect rainbow”, sharing the picture, she wrote, “The camera doesn’t reflect that but it was beautiful and the colors were so vivid.” Similarly, Ray Smith said that he spotted the rainbowed in the skyline with a “sheet of lightning”.

My mom just took this picture: double rainbow 🌈 , with lightning 🌩 outside of Moses Lake #wawx pic.twitter.com/4YS0jnf9Fc

This combination of lightning and rainbows, however, was probably down to a few factors coming together.

Firstly, there was a lot of energy within the atmosphere so when the thunderstorms developed there was plenty of electrical charges which produced a lot of lightning. The storms were also quite localized so there were sunny spells between the showers. And lastly, the timing was spot on. As the sun was setting, the angle of the sun was just right with the thunderstorm to form rainbows.

Did anybody see the lightning last night? It was very strange weather yesterday wasn’t it! Here’s a photo Mr Orchard took from his window – you can see a double rainbow AND a big fork of lightning! 🌈🌈⚡️ pic.twitter.com/FTAVpab1Qt

According to the BBC, this can often happen during a localized storm when there’s enough of an electrical charge to produce lightning in the sky, but also when brief sunny periods occur between rainstorms.

Double rainbow and lightning strike. Picture taken from my back porch. pic.twitter.com/bCgEWwbabf

While the UK meteorological department office forecasted thundery showers forecast in parts of the UK through this week, the experts said that the downpours with lightening exactly created ample of the electrical charge along with the direct sunlight that managed to hit the rains coupled with a thunderstorm to give rise to this unique phenomenon in the sky. The lighting and the rainbows were witnessed in Hednesford, Staffordshire, Stockton, Warwickshire, Birmingham, and several other states across the UK. Besides, users also shared incredible photos of the sky after the heavy downpours, as requested by the MET department.

I was just minding my own business with a @Purityale UBU and saw this out the window… powerful stuff! #Thunderstorm pic.twitter.com/BUkl7qLL5x

This is symbolic for so many reasons. pic.twitter.com/ZIhaaj6tKi

Double rainbow over my dads place I hope there’s a double pot of gold at the end cos I need the to buy a house in Caldbeck 🙂 pic.twitter.com/aYkgftaPpj

The sun was shining brightly and yet we got a double rainbow. Coincidence? pic.twitter.com/tmUCkCorrf

A double rainbow piercing through the dark clouds this evening feels like a beautiful metaphor brought to us by nature in light of today’s events 🦄 🌈 💪🏻 pic.twitter.com/Wyh7lLgZ4H

Many tried to capture the phenomenon before

According to a science journal, the ‘rainbow lightning’ is a rare meteorological phenomenon for which the weather conditions have to be perfect. A Storm chaser McCown wrote on his official Twitter handle that he had struggled to document the rainbow and lightening together for at least seven years, however, the opportunity arrived one day. He mentioned that while he captured his “Lucky Strike,” he noticed the sunlight falling directly on the rain droplets. The sky during the sunset was clear due to rain, but polarized storm clouds were still looming ahead of the cameraman. Similarly, a sheriff in Texas captured the unique phenomenon when he photographed a cloud-to-cloud lightning flash splitting a double rainbow. Astronomer Phil Plait accidentally caught the same display on film while shooting a YouTube video on his Colorado lawn.

This evening just before sunset, I finally got the shot I’ve been trying to get for years. pic.twitter.com/JFJG4vlAb3

This Bird Breed Called Scarlet Tanager Is A Real Flame Of Spring Previous post
The Azure Tit Is A Frosty, Blue And White Little Bundle Of Cute Next post