The Willie Wagtail Used To Be Called An Omen, But He’s Definitely Unimpressed With Your Opinion

The Willie Wagtail, Rhipidura leucophrys, lives all over mainland Australia and is hard to miss with its long fanned tail that it swings from side to side or up and down while foraging on the ground.

The Willie Wagtail is one of Australia’s most widespread species, at least on the mainland. Reflecting this, it features prominently in Indigenous mythology. Willie Wagtails were disliked by Indigenous people in some areas, as they were thought to loiter at the edge of camps, listening to conversations then telling the secrets elsewhere. The Willie Wagtail was also seen as an ill omen, and they would abandon an expedition if a Willie Wagtail was seen on the morning of departure. 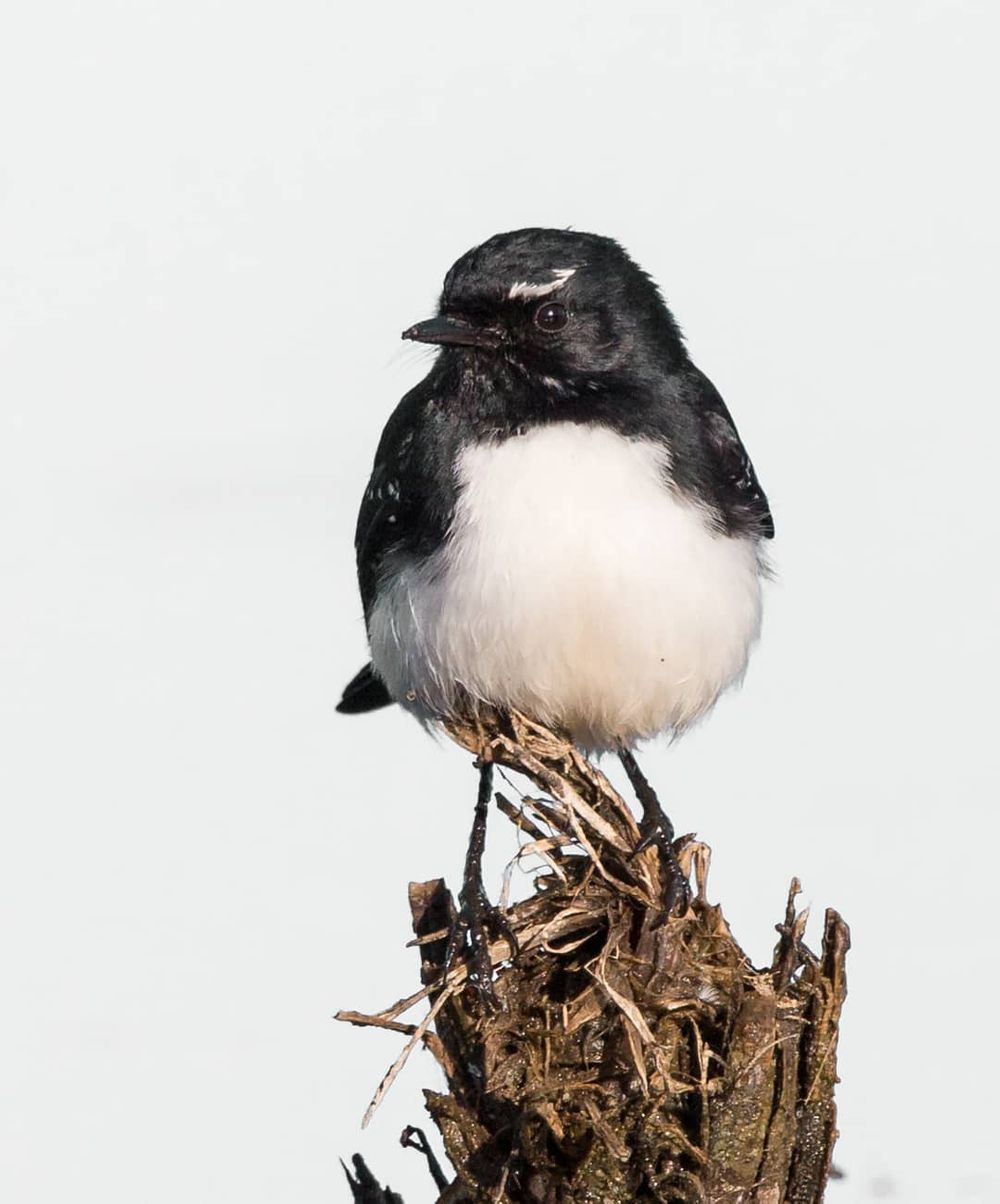 The Willie Wagtail is a passerine bird native to Australia, New Guinea, the Solomon Islands, the Bismarck Archipelago, and eastern Indonesia. It is a common and familiar bird throughout much of its range, living in most habitats apart from thick forest. Measuring 19.0–21.5 cm in length, the Willie Wagtail is contrastingly colored with almost entirely black upperparts and white underparts; the male and female have similar plumage.

Three subspecies are recognized; leucophrys from central and southern Australia, the smaller picata from northern Australia, and the larger melaleuca from New Guinea and islands in its vicinity. It is unrelated to the true wagtails of the genus Motacilla; it is a member of the fantail genus Rhipidura and is a part of a ‘core corvine’ group that includes true crows and ravens, drongos and birds of paradise. Within this group, fantails are placed in the family Dicruridae, although some authorities consider them distinct enough to warrant their own small family, Rhipiduridae.

They are named as such because they do sort of wag their tails.

This is my willy wagtail mate. You can see how close he gets and I haven’t zoomed in on him, I just bent down to film him. The other morning he followed me around the vegetable garden waiting for insects to be disturbed. I had to warn him to be careful as I did not want to step on him. As I was bent over weeding the garden I felt something on my shoulder and it was this little bird. A better spot to see the insects I guess. #willywagtail #mybirdfriend #wednesdaymorning #mybackyard #mybackgarden #goodmorning

Wagtails are never still for more than a few moments during daylight hours; even when perching they flick their long, black tails from side to side constantly, twisting about to better watch for prey.

Willie Wagtails are active feeders. Birds can be seen darting around lawns as they hunt for insects on the ground. As they do so, the tail is wagged from side to side. Insects are also captured in the air, in active chases. 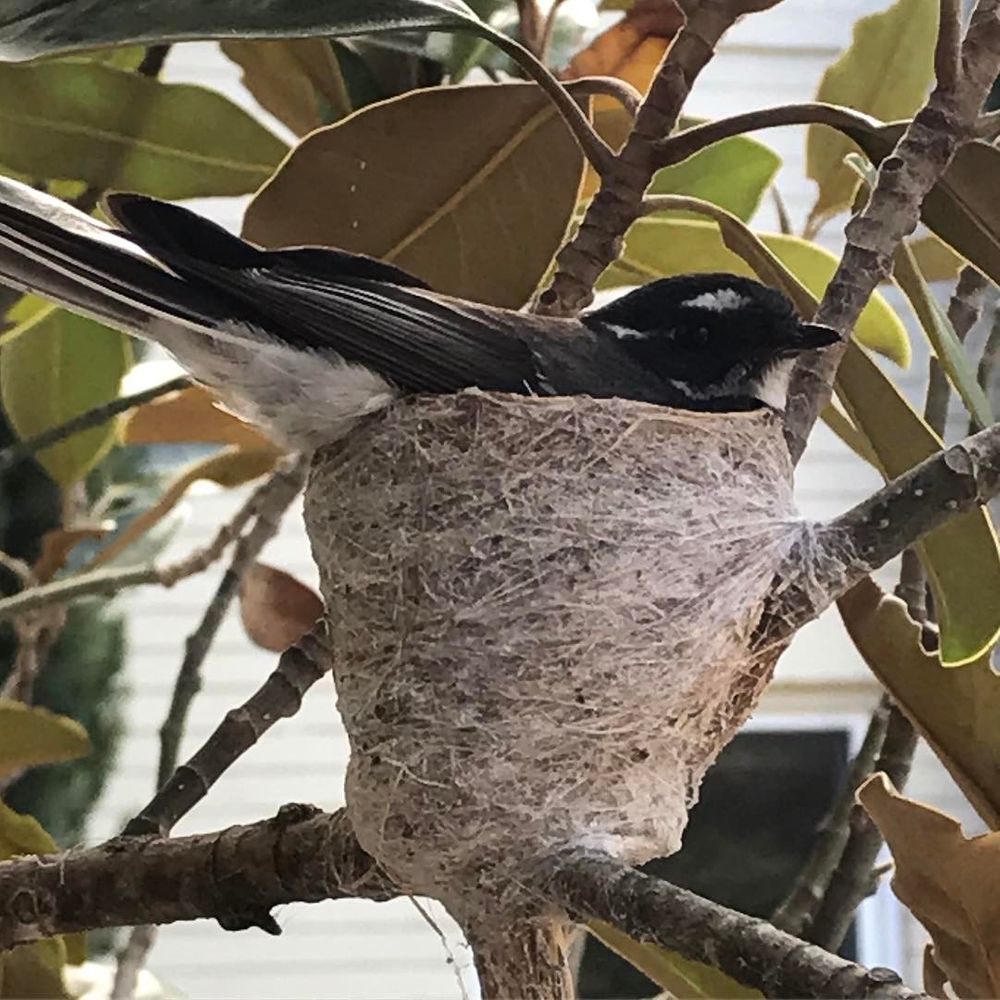 The plumage is black above with a white belly. The Willie Wagtail can be distinguished from other similar-sized black and white birds by its black throat and white eyebrows and whisker marks. The name wagtail stems from the constant sideways wagging of the tail. Young birds resemble the adults, but have paler, slightly rusty edges to the feathers of the wings.

The Willie Wagtail is classified as Least Concern. Does not qualify for a more at risk category. Widespread and abundant taxa are included in this category.

Although research featured in the ‘State of Australia’s Birds 2015‘ headline and regional reports indicates that the Willie Wagtail  is declining in some regions, while increasing in others. 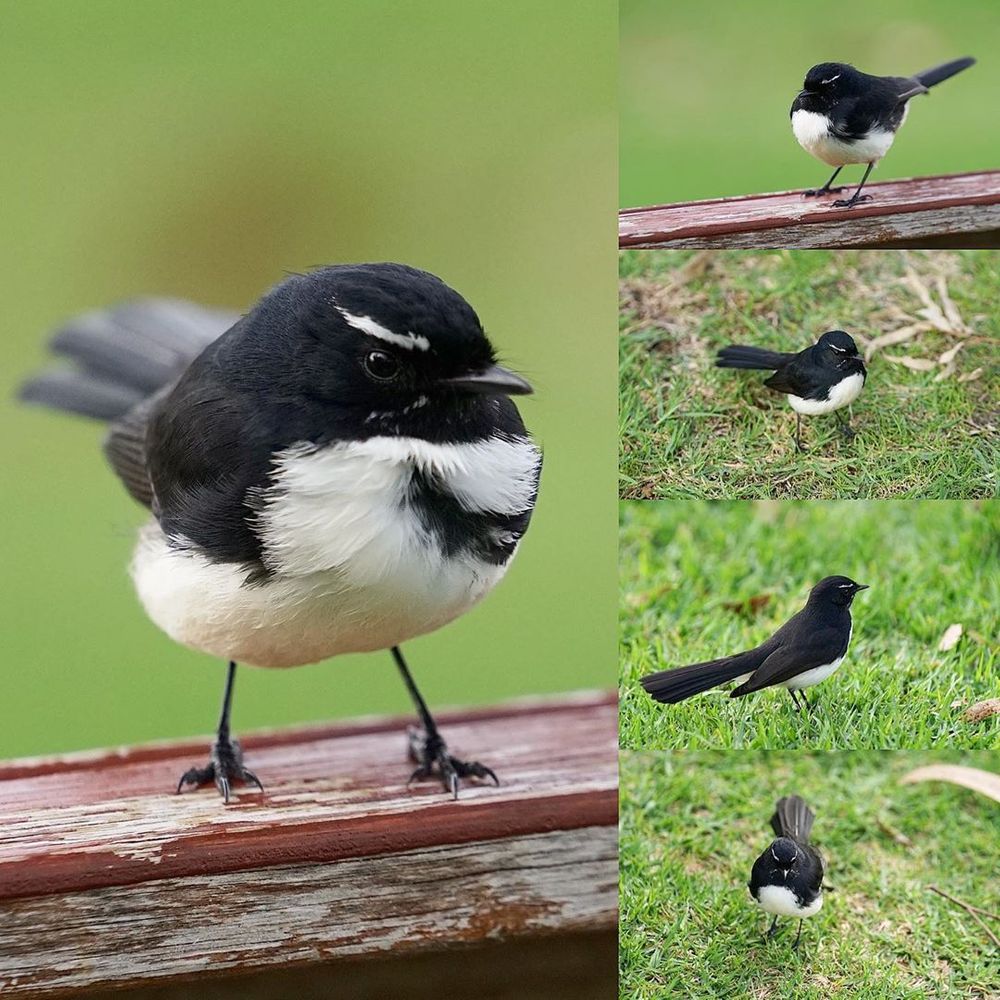 The Willie Wagtail’s nest is a neatly woven cup of grasses, covered with spider’s web on the outside and lined internally with soft grasses, hair or fur. The soft lining of the nest, if not readily available, is often taken directly from an animal. The nest of the Willie Wagtail may be re-used in successive years, or an old nest is often destroyed and the materials used in the construction of a new nest. Nests are normally placed on a horizontal branch of a tree, or other similar structure. The cream-colored eggs, speckled with grey and brown are incubated by both sexes. The young birds stay with the parents until the eggs from the next clutch start to hatch. At this point they are driven away. If conditions are favorable, the couple may raise up to four successive clutches in a single season.

Check the video below to learn more about these cheeky birds: