Birds never stop to amaze us with their colors, sizes, and other different traits. Some birds have intricate and stunning plumage that can be compared to a fruit or a berry. This is true for a species of birds that are unsurprisingly called Scarlet Tanager. Hiding high up in the canopy of eastern forests, these dazzling birds can be surprisingly tough to spot.

A SCARLET TANAGER (Piranga olivacea) delights the eye whenever you may see one, which for this author is not very often. So when the right place, right time, right camera, and right light offered the opportunity to make images of this bird, I was full steam ahead with my camera and long lens. I feel fortunate to have made several good images and that is why I’m sharing this one with you.

Finding scarlet tanagers in the thick forest treetops is not easy. Oaks, maples, basswood, hickory, and other trees have a full spread of new leaves. Getting a glimpse of a tanager may be very brief. Hearing its call may let you know it is there. The call is likened to a chick-burr sound. Dedicated birders use all the tools of their passionate hobby to find this bird. 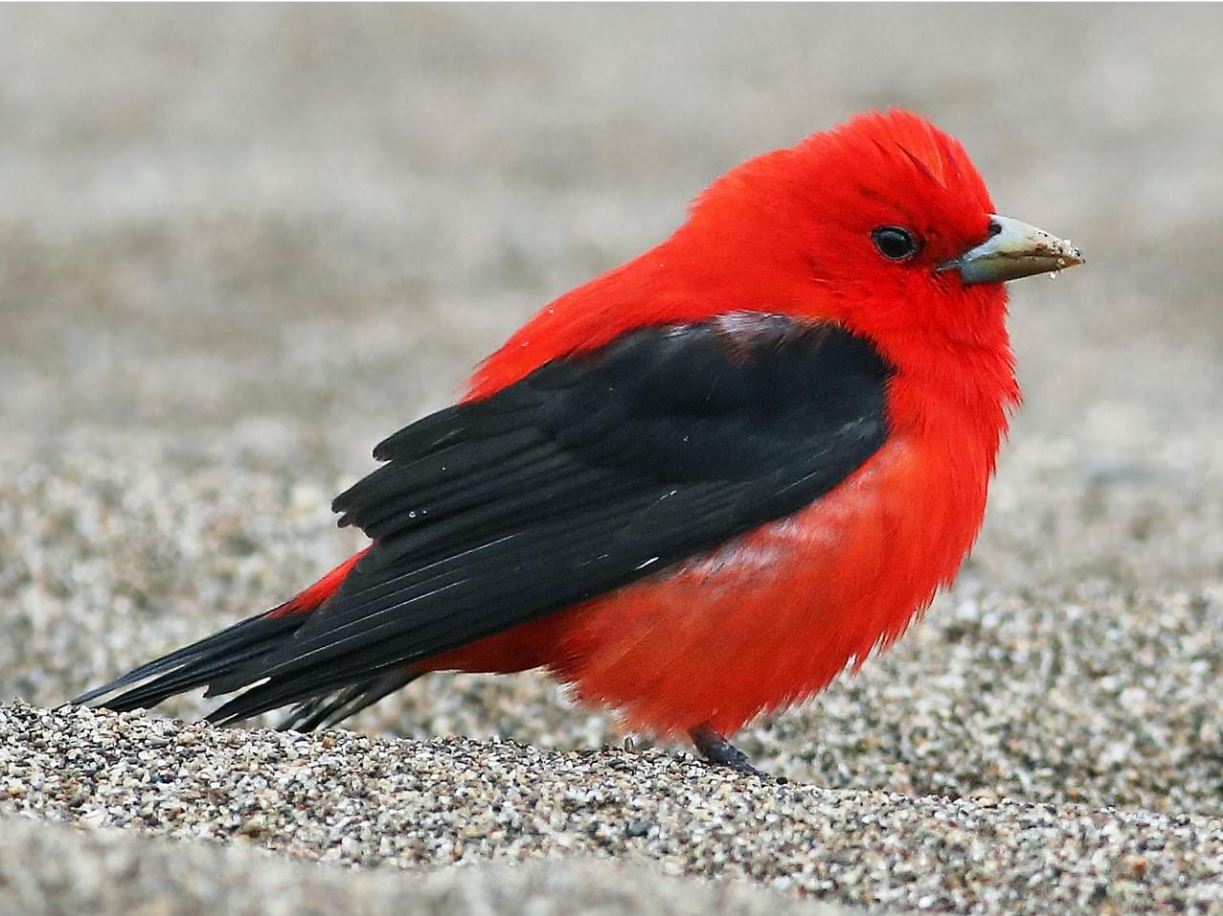 Foods include insects and lots of varieties of berries and maybe tender buds of vegetation. The food list is long and includes ants, sawflies, moths, butterflies, beetles, flies, cicadas, leafhoppers, spittlebugs, treehoppers, plant lice, scale insects, termites, grasshoppers, locusts, dragonflies, dobsonflies, snails, earthworms and spiders. And they try to find all of these high in the treetops.

With regard to nest sites, scarlet tanagers prefer to build the nest high in a tree on a branch that is mostly horizontal with a good view of the ground. The nest is a flimsy accumulation of pine needles, grasses, small twigs, plant stalks or small tree bark strips. Loose ends may be woven into the shape of the female’s body. Eggs can be from three to five greenish-blue to light blue with speckles of chestnut or red. Only one brood is raised per year. Incubation takes 12 to 14 days. After 10 to 15 days in the nest, the young are out and learning what it takes to survive. Young tanagers will be fed by the parents for about two weeks after leaving the nest.

Cowbirds will attempt to usurp a tanager nest by laying their own egg in place of a tanager egg they remove. If so, tanagers raise the cowbird as if it was their own. But if the tanager pair is actively on their nest, they will defend their territory from an invasion attempt by cowbirds and successfully keep them away. 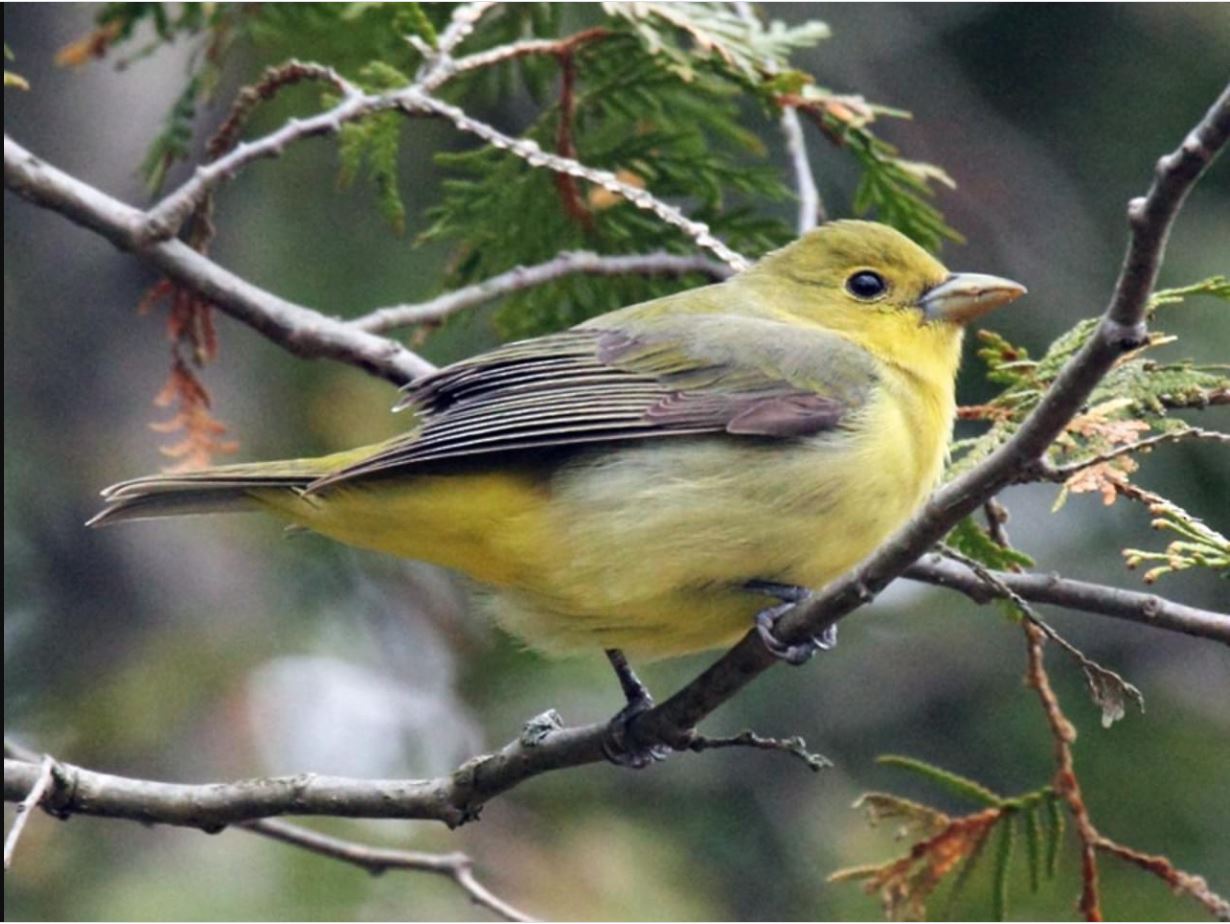 In summer, the forests of the eastern United States are home to a bounty of birds, including this gorgeous Scarlet Tanager, which spends most of the year in tropical South America. The male’s body is a dazzling red, in contrast to his black wings and tail. It seems that these boldly colored birds might offer an easy target for a birdwatcher’s watchful gaze, but male Scarlet Tanagers can be hard to spot! 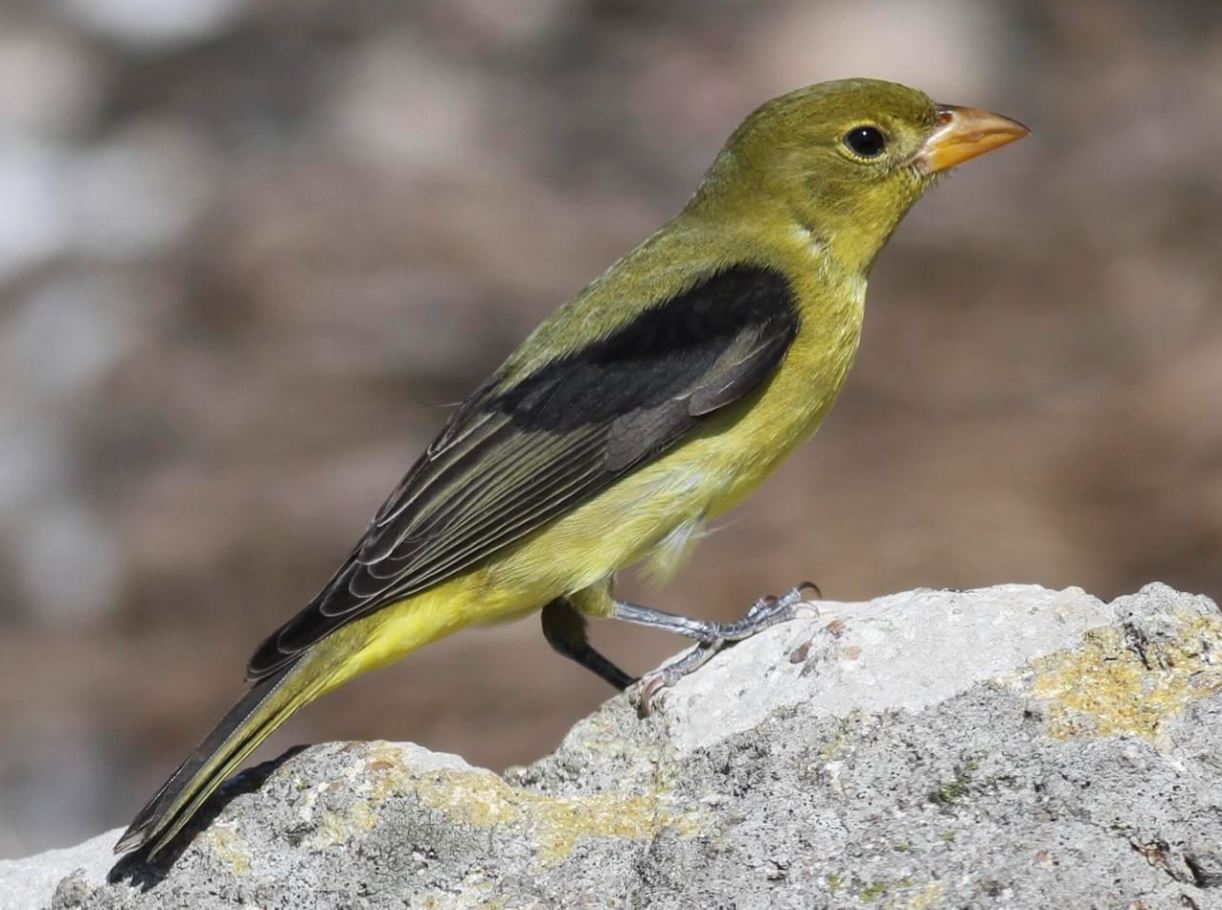 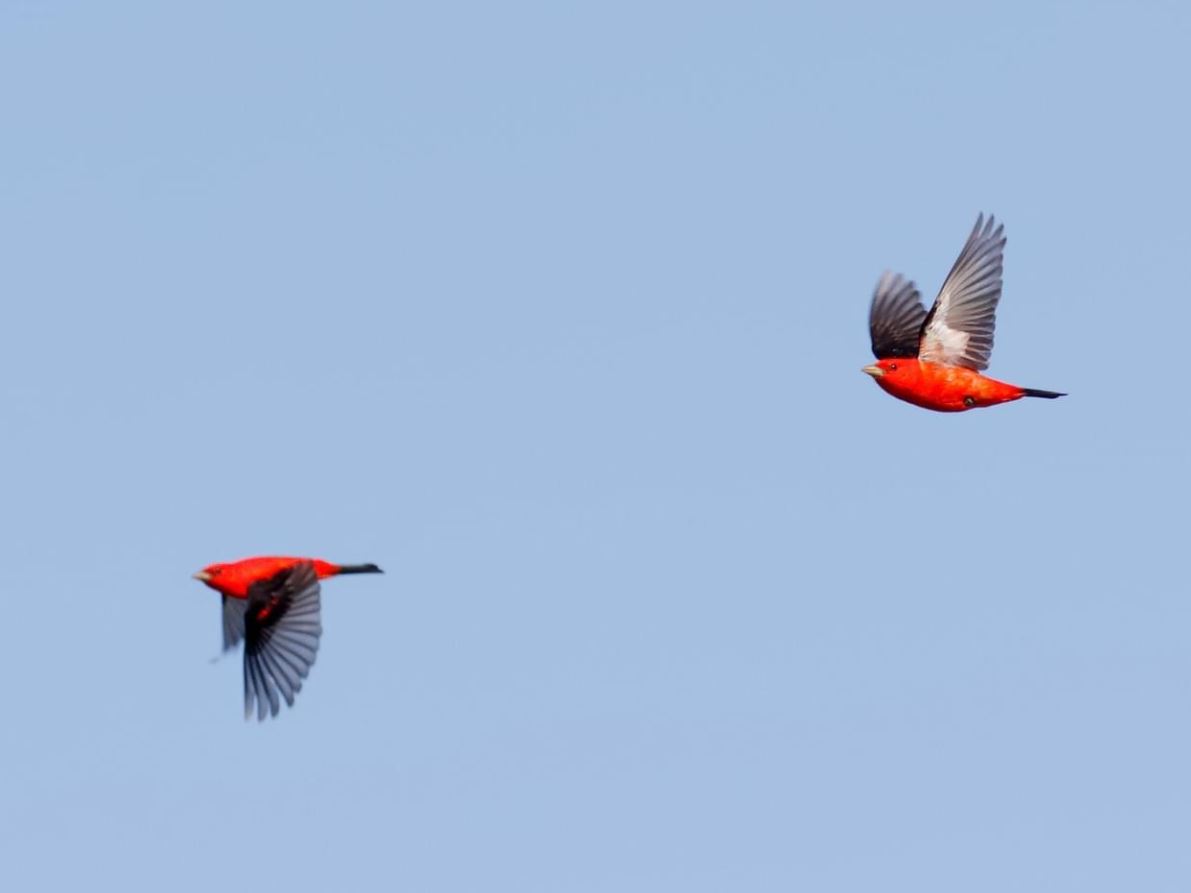 Here’s an audio that explains a little bit more in details this stunning bird:

This audio story is brought to you by BirdNote, a partner of the National Audubon Society. BirdNote episodes air daily on public radio stations nationwide.

In summer, the forests of the eastern United States are home to a bounty of birds. Birds – intriguing, attractive, mellifluous, or mysterious. But there’s one bird in particular that, nearly every time its name comes up, you hear the word “gorgeous”: the Scarlet Tanager.

The male Scarlet Tanager is a deep, dazzling red, glowing with the luster of velvet. His entire seven-inch body is feathered in scarlet, in bold contrast to his black wings and tail. (This resplendent summer visitor spends most of the year in tropical South America, as far south as Ecuador and Bolivia.)

Scarlet Tanagers nest within large tracts of mature forest, where they forage for insects under the shelter of the tree canopy. It seems that such boldly colored birds might offer an easy target for predators, or for a birdwatcher’s watchful gaze. But, though brilliant scarlet when viewed in the open, male Scarlet Tanagers are remarkably hard to spot when perched among the branches overhead. The contrasting bright and dark colors mimic summer’s pattern of light and shadow within the canopy. Thus the bird is often concealed.

So that gorgeous visitor from the tropics may well be hidden in plain sight!

BirdNote’s theme music was composed and played by Nancy Rumbel and John Kessler.