Using Chainsaw, Skilled Artist Transforms A Damaged Tree Into A Hand Reaching For The Sky

Almost every material imaginable can be transformed into a work of art, but it would take skill to do so. This chainsaw artist from Wrexham is one of those talented people who can turn wood—his chosen medium—into anything he wants it to be.

Waterloo-born Simon O’Rourke is an award-winning wood carver who creates imaginative sculptures across the globe. Now based in Wales, Simon is currently in the midst of a four-week project which has brought him back to the Liverpool City Region and it’s said to be one of his biggest challenges yet – carving The Beatles from tree trunks. 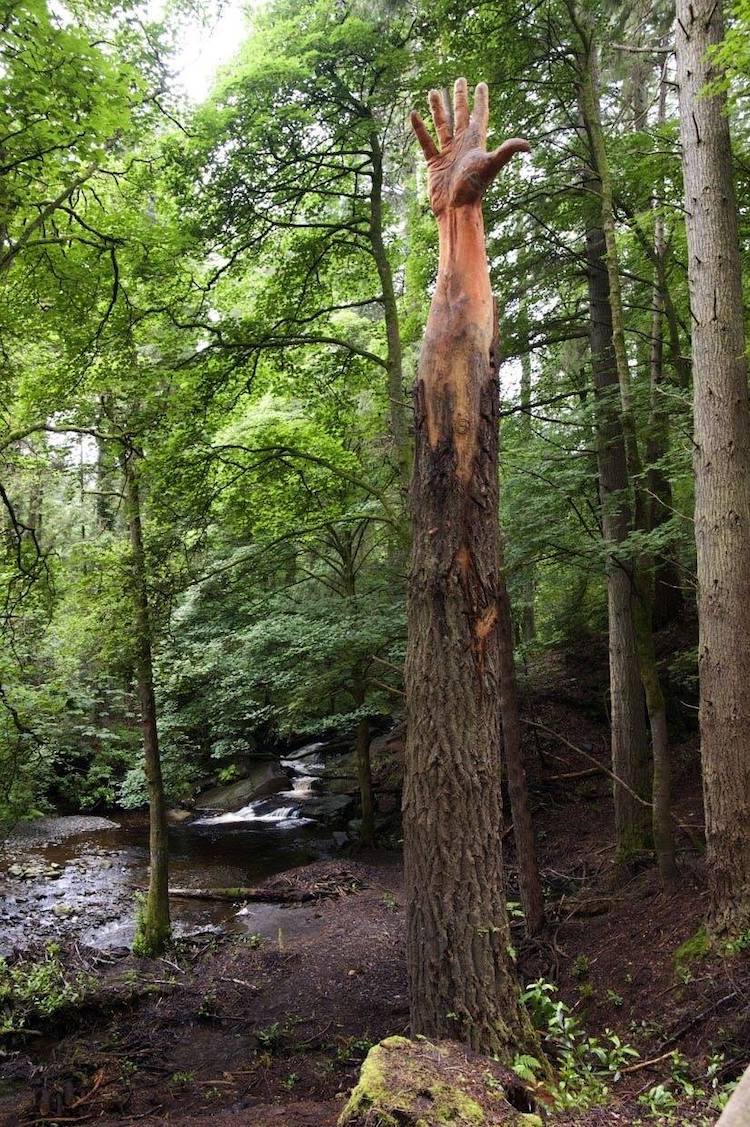 The remnants of the UK’s tallest tree, which was felled after being damaged in a storm, has been transformed into a carving of a giant hand.

A 15.2m (50ft) stump was the only part left standing after the 124-year-old Douglas Fir was axed at the Lake Vyrnwy estate in Powys in March.

Artist Simon O’Rourke, 33, from Wrexham, used a chainsaw to carve the top of the stump, and modelled the sculpture on his own hand. 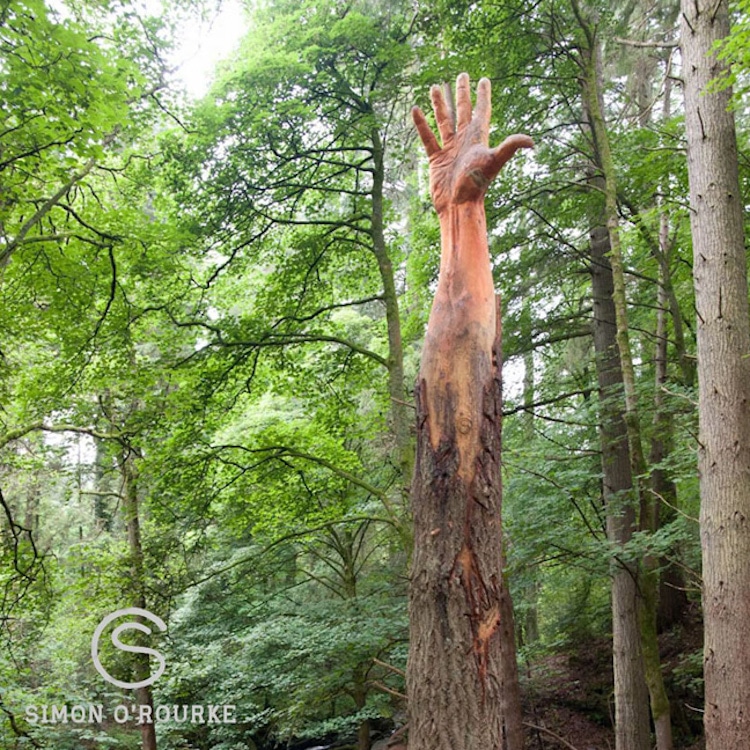 Scaffolding was erected around the “blank canvas” tree trunk last month and the project took a week to complete.

“The Forestry Commission, who are looking after the area, decided that it would be a good idea to have a memorial to the tree and left a 50ft stem when they felled it,” said Mr O’Rourke, who has called his work the Giant Hand of Vyrnwy.

“They invited eight artists to tender for the job and I got it.”

He said the hand carving was in an area of the estate known as The Giants of Vyrnwy, and the location had inspired him.

Artist Simon O’Rourke used a chainsaw to carve a giant hand emerging from a tree stump. 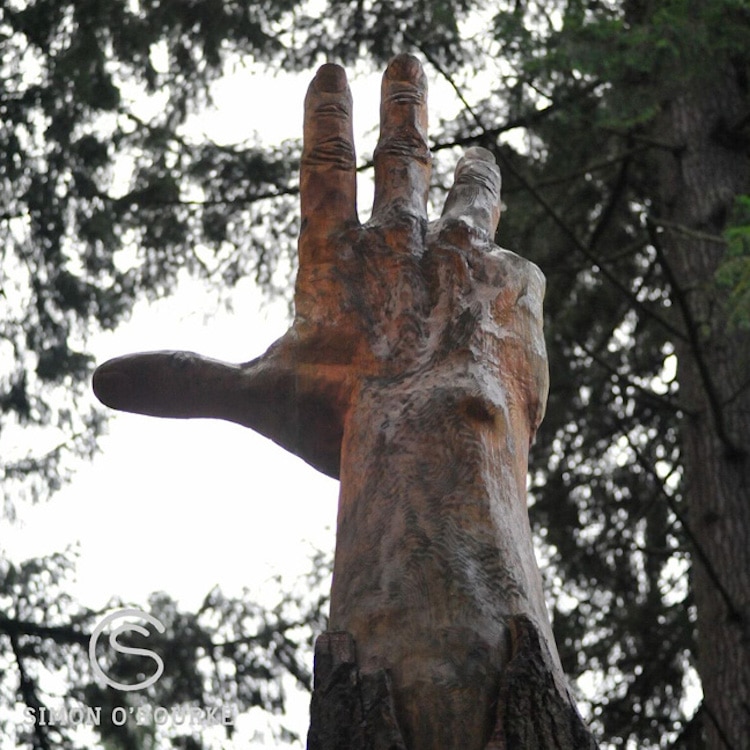 “There are a few tall Douglas firs growing in the Giants of Vyrnwy area and I was going on the giants theme,” he said.

“It’s a last attempt by the tree to reach the sky.”

Mr O’Rourke, who has been tree carving for nine years, has 12 different chainsaws.

His previous projects have included carvings of a swan, an angel, a kingfisher, a chipmunk and a giant clock. 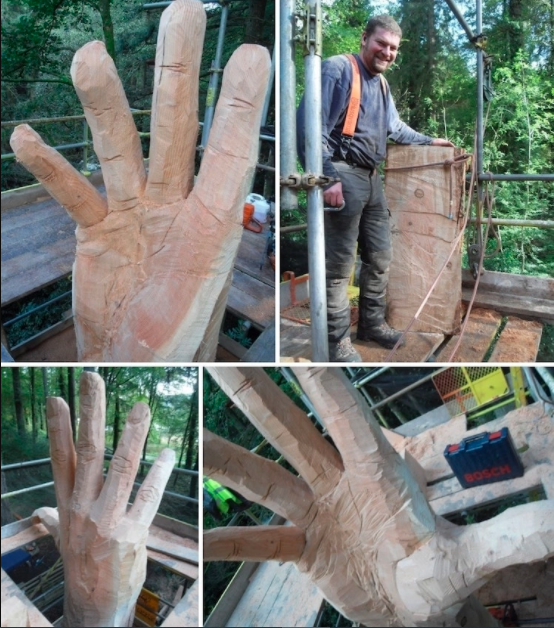 The damage to the tree was spotted earlier this year, and the Forestry Commission feared that it could have been a risk to visitors.

The tree was leaning to one side, and there were two substantial cracks on opposite sides of the main stem extending from the buttress roots to a height of 3.5m.

A few years ago, it was measured by tree surgeon who stretched a length of rope up to the top as he climbed its branches.

The height was then calculated back on the ground and confirmed by the Tree Register of the British Isles.

Creating the piece was an intense process. O’Rourke worked in a scaffold and formed the hand over the course of six days. 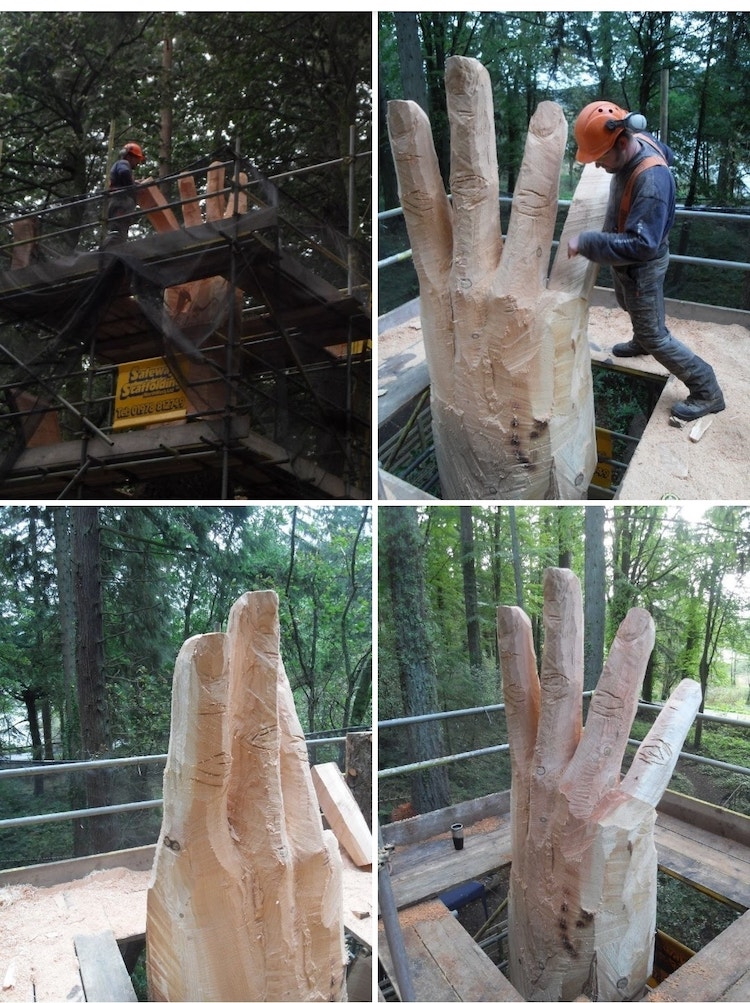 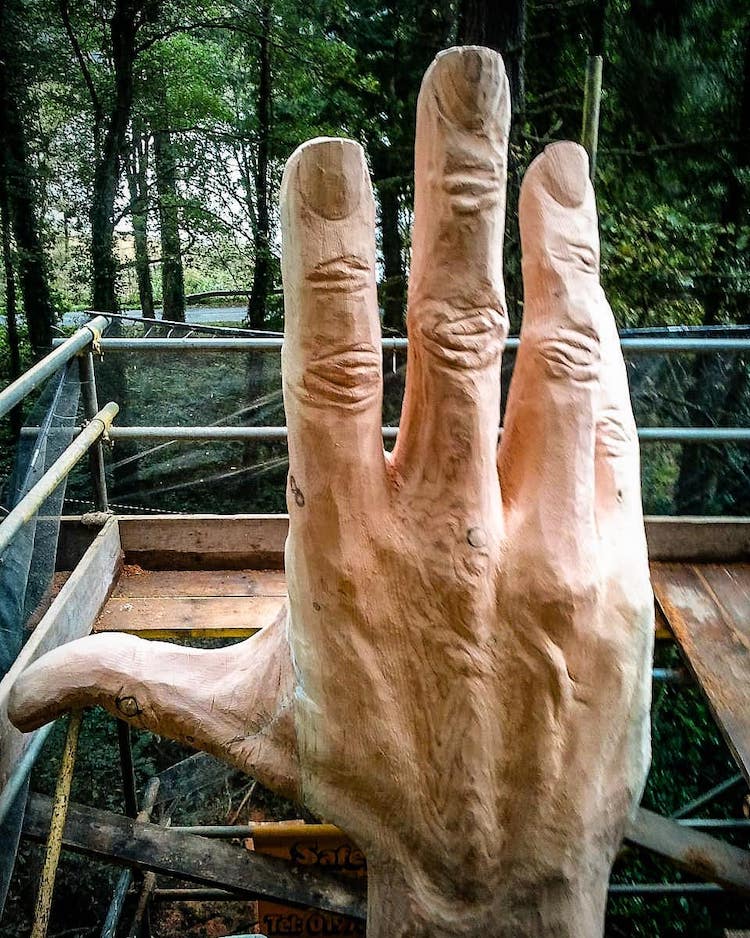 The sculpture is now near Lake Vyrnwy, a reservoir in Powys, Wales where everyone can enjoy it.

Found this stunning sculpture whilst walking around the lake today. Incredible work by @simonorourke