Raine Island, a remote vegetated coral cay on the outer edges of the Great Barrier Reef in Queensland, Australia, hosts the largest green turtle rookery in the world.

NT News has reported that researchers at the island used a drone to count how many green turtles were in the area.

The stunning footage, captured in December 2019, shows up to 64,000 turtles bobbing in the ocean, waiting to come ashore and lay clutches of eggs.

This is some of the most spectacular vision you will ever see – our new eye in the sky has captured 64,000 turtles off the coast of Raine Island, north-west of Cairns.

You can learn more about the projects by visiting the Queensland Government and the Great Barrier Reef Foundation websites. But before you go, let us know what you thought of this! Do you also think turtles are awesome? Let us know in the comments section below!

According to the report, Dr. Andrew Dunstan, from the Department of Environment and Science, said researchers had been investigating different ways to count turtles. 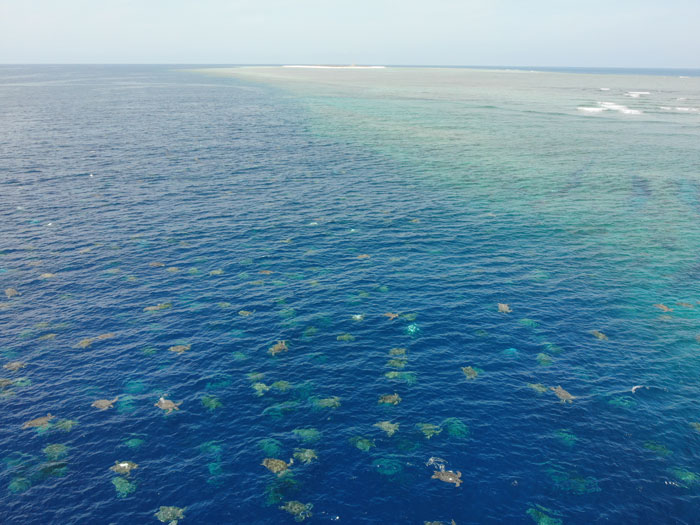 Dunstan added that the paint is non-toxic and washes off in a couple of days.

The drone footage was soon analyzed frame by frame in a laboratory, this way making sure there was minimal observer error. Researchers have estimated based on the videos that there are around 64,000 green sea turtles waiting to nest on the island. 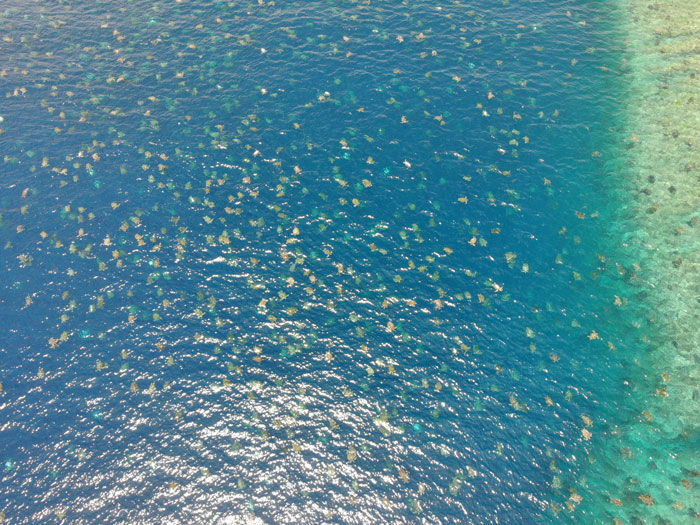 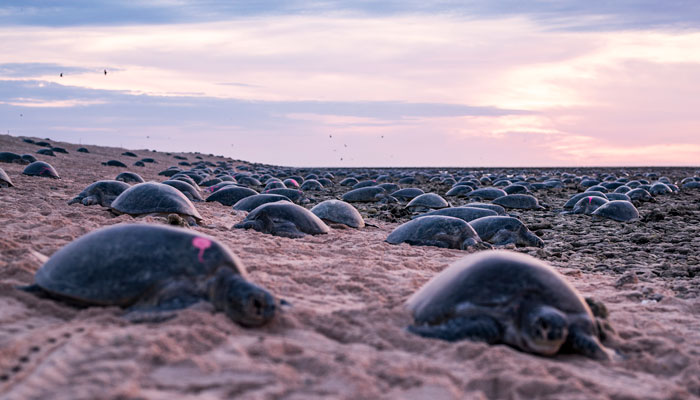 You see, green sea turtles are a threatened species (endangered status) due to a number of factors: relentless hunting, poaching, and egg harvesting as well as boat strikes, fishermen’s nets that lack turtle excluder devices, pollution, and loss of habitat. So scientists are keeping a close eye on their populations in hopes of helping the species to survive.

“Previous population survey methods involved painting a white stripe down the green turtles’ shell when they were nesting on the beach. The paint is non-toxic and washes off in a couple of days,” explained Dr. Andrew Dunstan of the Department of Environment and Science (DES) in a Queensland Government public media release. 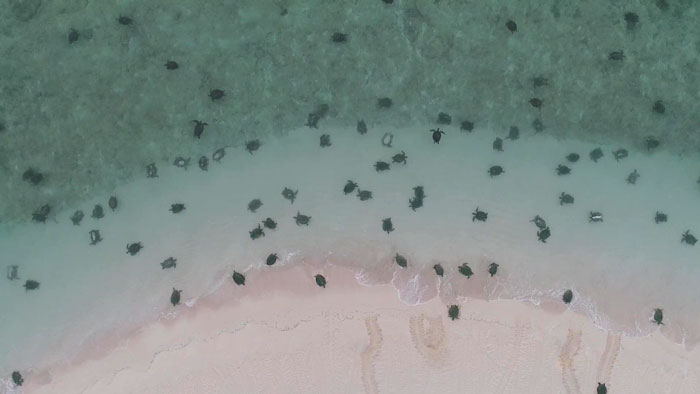 Based on the video, researchers estimate there are around 64,000 green sea turtles in the Raine Island area 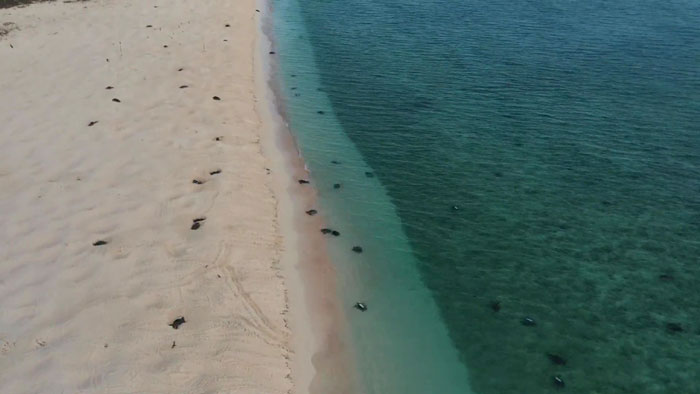 Raine Island is one of the key nesting locations where green sea turtles come to lay their eggs. The nesting grounds at Raine Island are considered the world’s largest aggregation of green turtles. 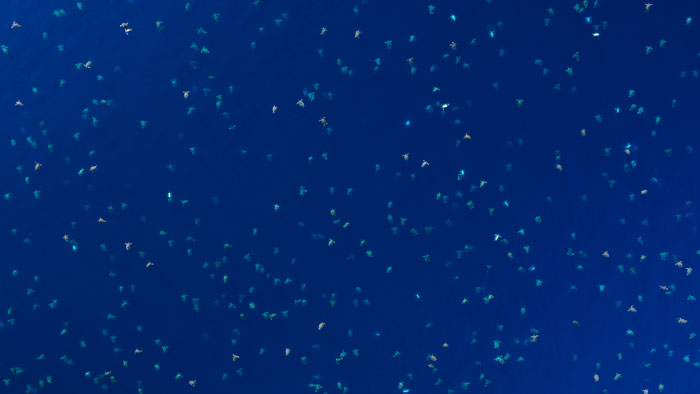 By using drones, scientists were able to compare current numbers with the observer counts, concluding that the number in the past was underestimated by a factor of 1.73. Besides the improved accuracy, counting is now done much faster, saving a lot of precious time in the field and minimizing their potential impact on nature in the process.

The nesting grounds at Raine Island are considered the world’s largest aggregation of green turtles, so the drone footage is also a rare glimpse into this phenomenon.

Until now, populations were counted using boats, which isn’t as ideal as a wide over-head view of a drone 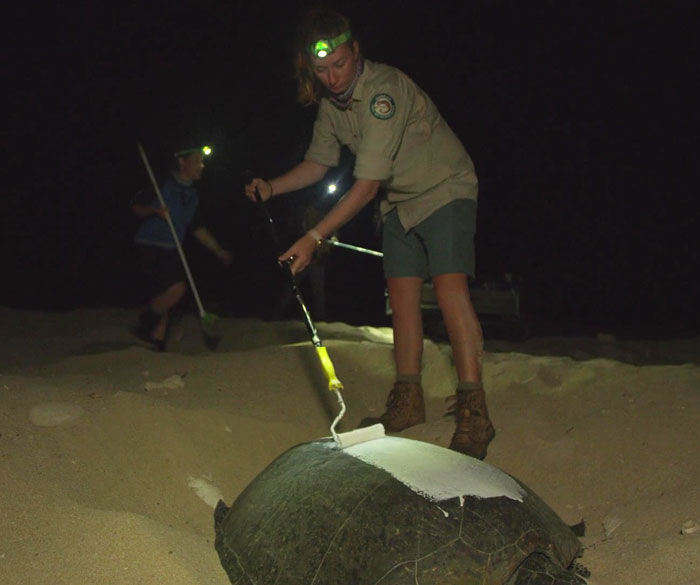 It’s difficult, Dunstan explained, to accurately count thousands of painted and unpainted turtles from a small boat in rough weather, so the researchers utilized a drone.

“Using a drone is easier, safer, much more accurate,” he said, “and the data can be immediately and permanently stored,” the report quoted.

To make sure counts were correct, the report said the footage was analyzed by the researchers, frame by frame.

How has drone-use impacted turtle counts?

According to the report, Richard Fitzpatrick, a research partner from the Biopixel Oceans Foundation, said a comparison of drone counts to boat counts revealed they had underestimated the numbers in the past by a factor of 1.73.

“By using drones we have adjusted historical data,” Fitzpatrick said.

“What previously took a number of researchers a long time can now be [accomplished] by one drone operator in under an hour,” the report quoted.

“We’re seeing the world’s largest aggregation of green turtles captured in these extraordinary drone images that are helping to document the largest turtle numbers seen since we began the Raine Island Recovery Project,” Marsden said in the report.

“We’re taking action to improve and rebuild the island’s nesting beaches and building fences to prevent turtle deaths, all working to strengthen the island’s resilience and ensure the survival of our northern green turtles and many other species,” the report quoted Marsden.

How will the turtle count be improved in the future?

Researchers hope in the future to automate the counts from video footage, using artificial intelligence so the computer does the counting for them, the report said.

20 Under-The-Radar Spots In Europe That Totally Deserve More Recognition Previous post
Moose And Its Cute Calves Spend A Day At This Family’s Backyard, And The Owner Documented How It Went Next post
We use cookies to ensure that we give you the best experience on our website. If you continue to use this site we will assume that you are happy with it.OkPrivacy policy