On Wednesday, smoke from deadly and destructive wildfires sweeping through California, Oregon, and Washington transformed the daytime sky in San Francisco and other major population centers into vivid shades of orange and red — scenes straight out of Blade Runner 2049.

Below are some of the most striking shots of Wednesday’s dreamlike landscapes. 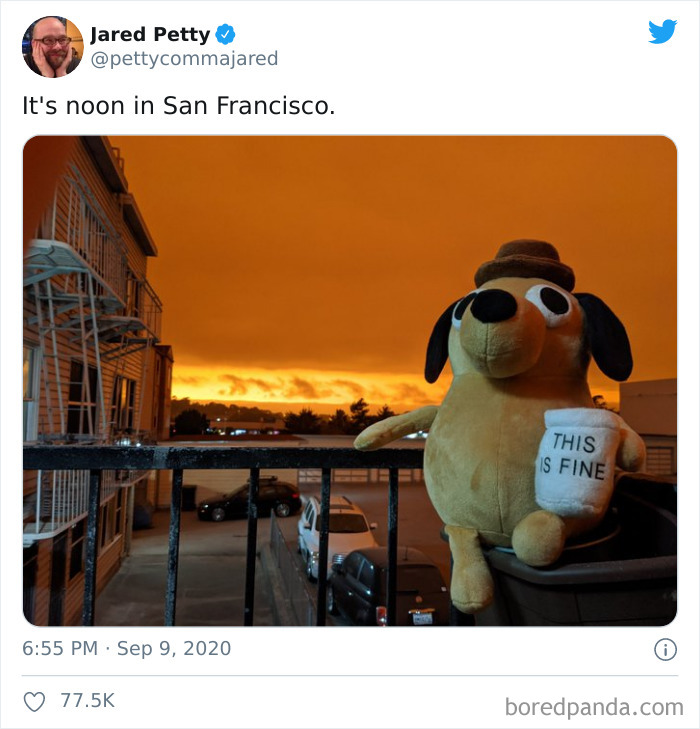 As dozens of active wildfires turn the West Coast of the U.S. into Hell on Earth, one has risen to become the biggest wildfire in California history.

The August Complex fire now engulfs a record 471,000 acres in the Golden State, eclipsing the 459,000 acres burned during the 2018 Mendocino Complex fires, which held the previous record. At only 24% contained, the fire is still likely to grow in the coming weeks.

The August Complex fire began as 37 separate fires that started in the Mendocino National Forest during an Aug. 17 lighting storm. While the size of the August Complex is record-setting, it is mostly located in remote areas and has burned just 26 structures, reports the Los Angeles Times. One person has died so far as a result of the August Complex, according to the National Weather Service. The most destructive wildfire in California remains 2018’s Camp Fire, which left 85 people dead and more than 18,000 structures destroyed. Hopefully, it stays that way. 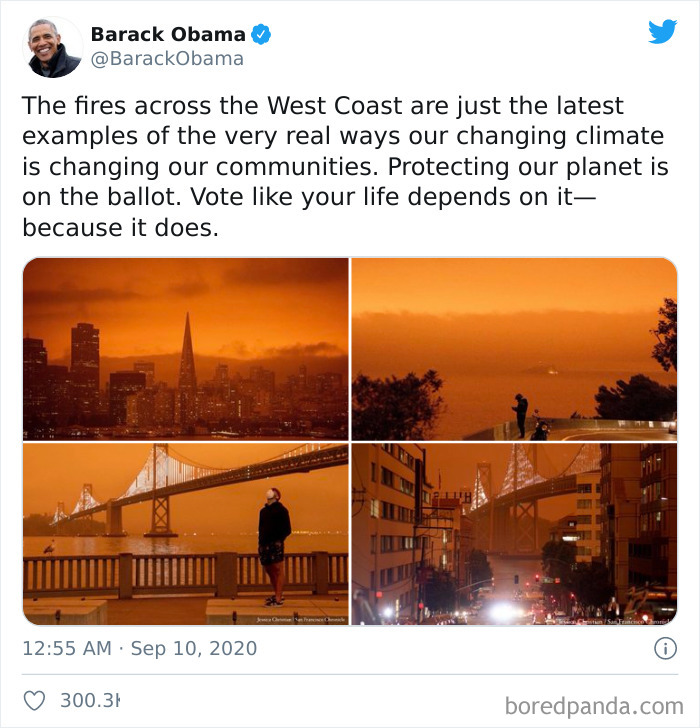 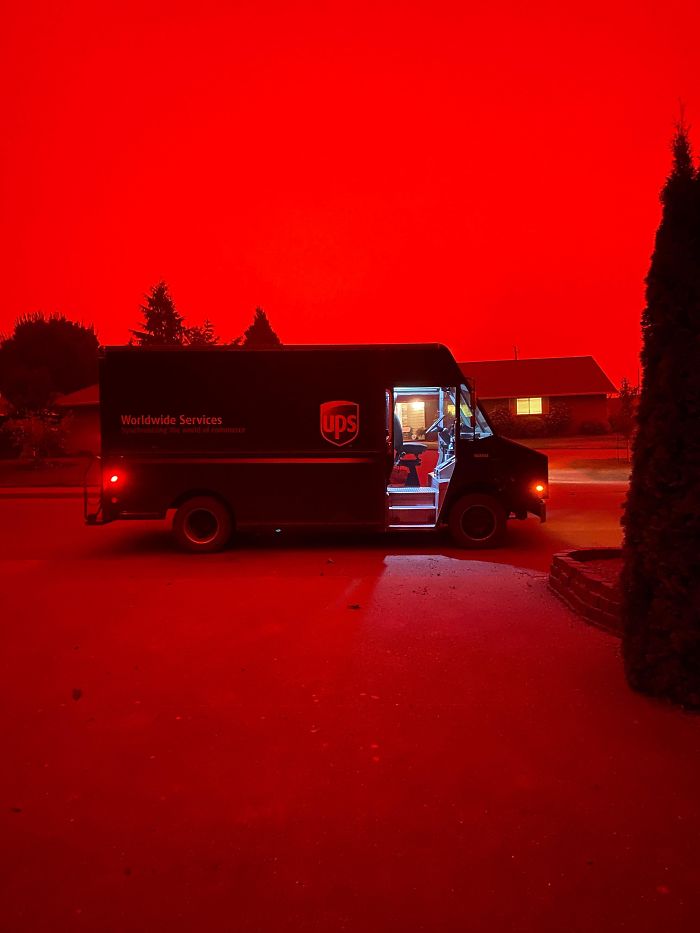 As the California Department of Forestry and Fire Protection (Cal Fire) pointed out on Thursday, six of the 20 largest fires in California history have taken place this year. The fires are being fueled by a series of record-setting heat waves, which are synonymous with global warming. That makes the catastrophe unfolding a vivid and terrifying reminder of the toll climate change is taking and will continue to take on ecosystems and humanity—even if we drastically change everything to reduce warming emissions immediately. 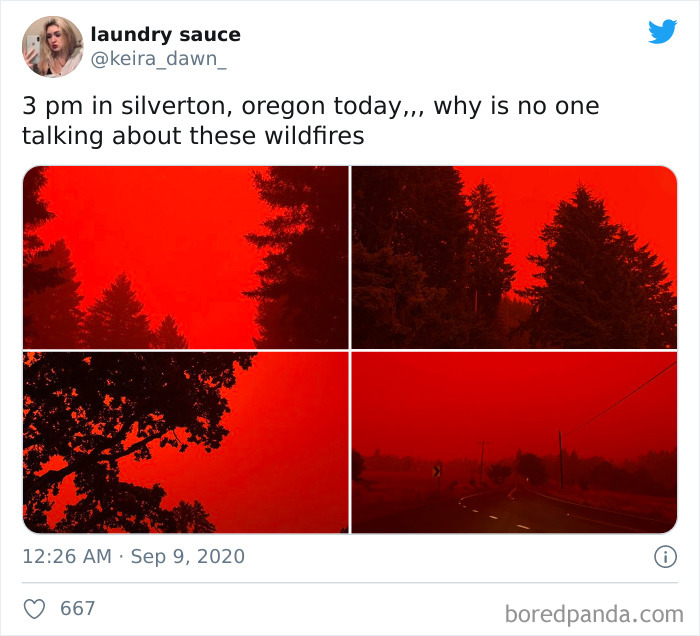 On top of the death and destruction of entire towns in the states, the massive fires have literally turned the sky red and blocked out the Sun, even in areas far from the flames, and resulted in the worst air quality on Earth. 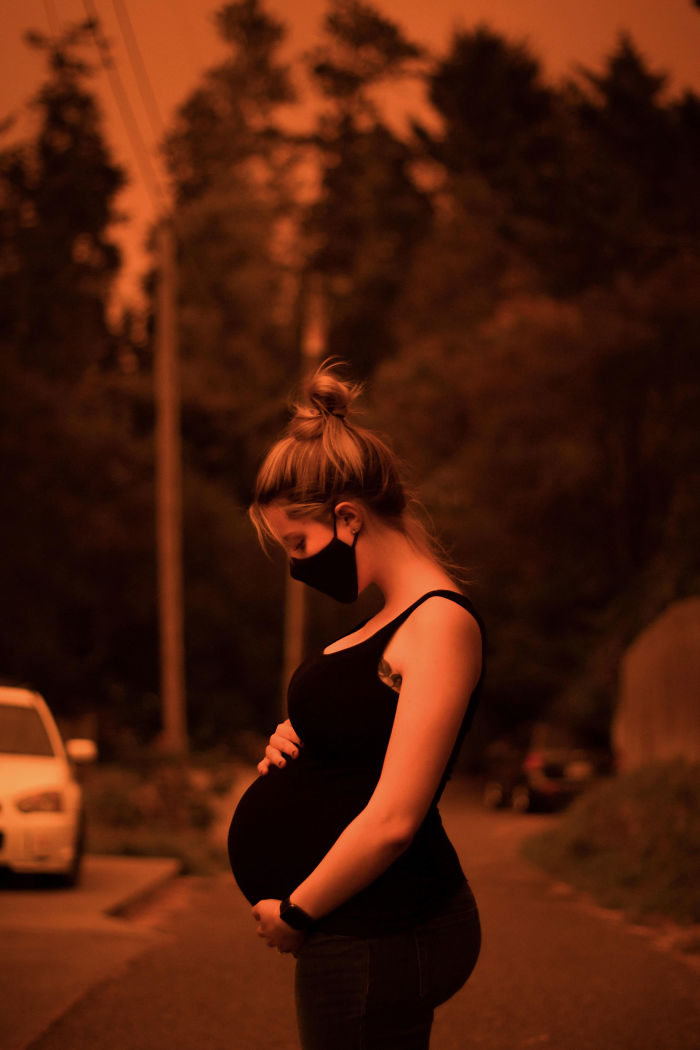 heckkinitup – California skies. A month until my due date and my world is red

Gardetto from the Bureau of Land Management said wildfires caused by humans comprise around 87 percent of all wildfires throughout the US. “If the public can prevent new wildfire ignitions, it will really help firefighters and emergency responders. Also, if people live in fire-prone, Wildland Urban Interface areas, where wildfire could threaten their homes, they should make their homes resistant to wildfire. This will greatly improve the odds that homes can survive a wildfire and, in some cases, will give emergency responders a chance at saving more homes.” 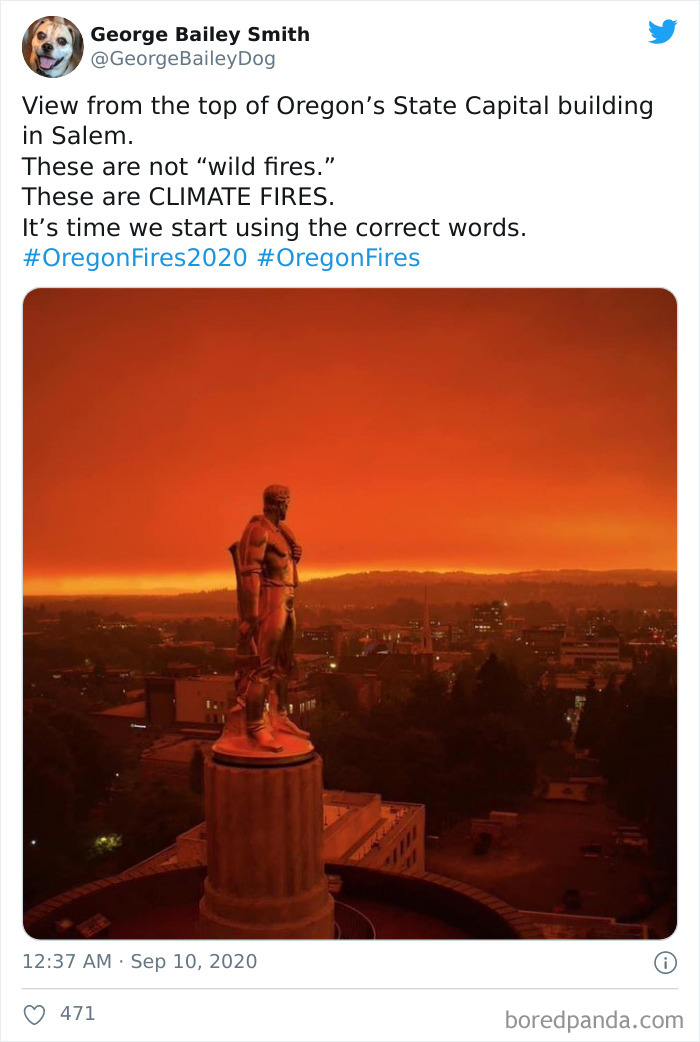 According to Gardetto, 2019 was a quiet fire year when compared to both 2020 and 2018. “This is due to the fact that last year, weather conditions supported less wildfire ignitions and less fire growth, whereas this year, drought, hot and dry weather, winds and lighting are creating new wildfires and exacerbating current incidents.”

She added: “Reducing human-caused wildfires is the absolute best thing the public can do right now! Visit www.nifc.gov to learn more about how you can avoid causing a wildfire.” 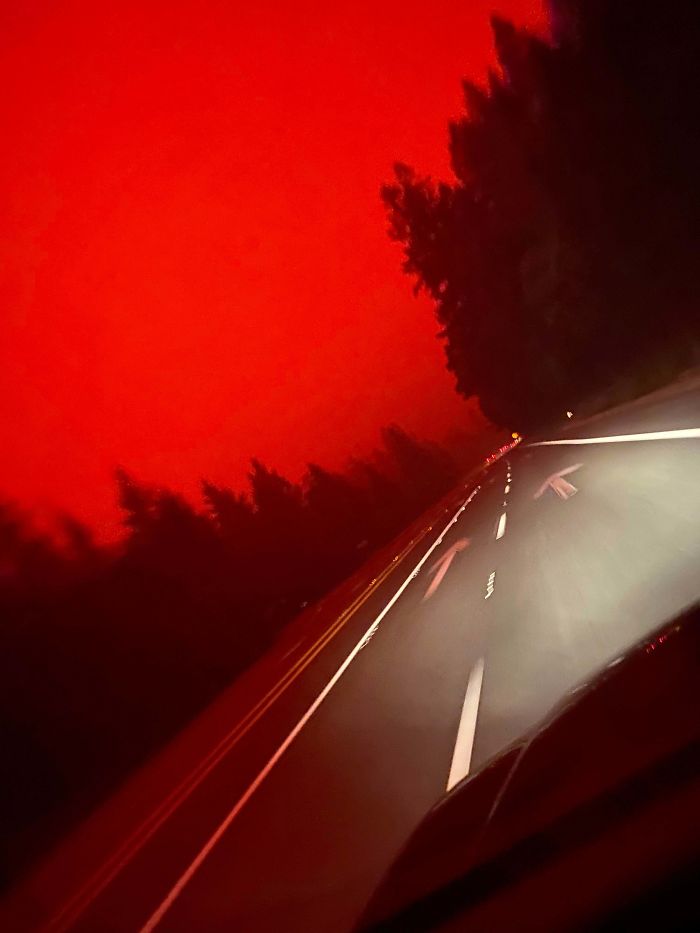 reddit.com – Tried going to visit my boyfriend on my day off, had to turn around because the fires apparently opened a portal to hell

Obviously, this is all horribly bad. But what’s worse is that this level of wildfires is only likely to become more frequent as human activity fuels further global warming, creating greater conditions for wildfires. As bad as 2020 is, without an immediate course-correction, we may soon look back on it as the good old days. 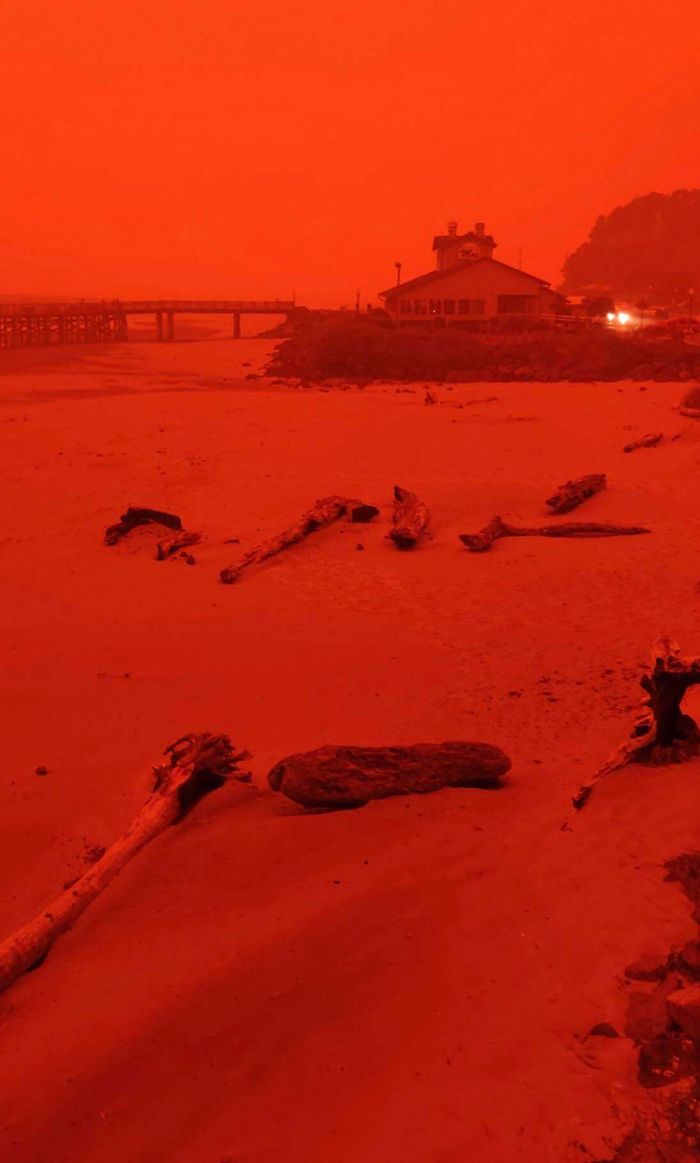 reddit.com – 9 AM at the Oregon Coast due to wildfires 100s of miles away

According to CNN meteorologist Judson Jones, the reason why the West Coast looks Apocalyptic is because of all the smoke and ash which “are acting like nature’s version of an Instagram filter.”

The hot, dry weather, and strong winds are turning the West Coast into a tinderbox. Lightning strikes have also added to the overall problems in the area. As have accidents. One such case has been on many a person’s lips recently. 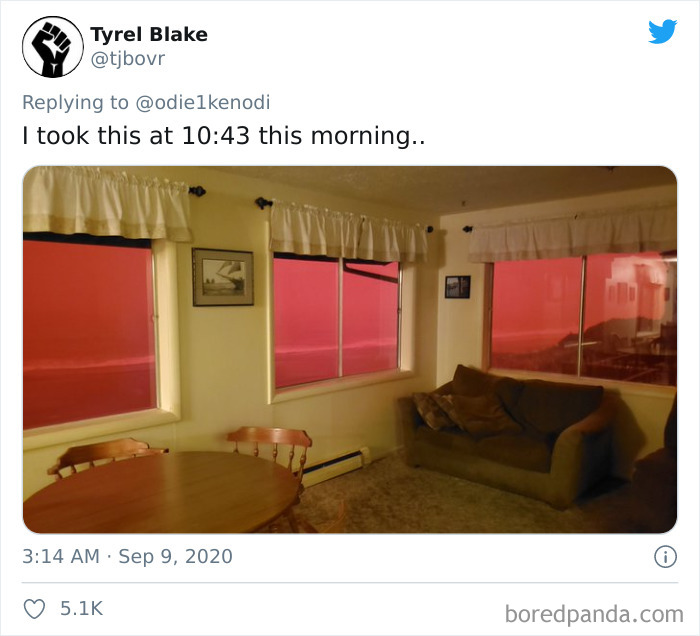 The El Dorado Fire in California’s San Bernardino County that was sparked by a pyrotechnic device at a gender reveal party had grown to 10,574 acres and counting. It was 16% contained on Tuesday, September 8, according to CNN.

The BBC reports that over 2 million acres of land have burned in California. During this time last year, ‘only’ 118k acres were destroyed by fires. The Telegraph puts the current amount of land torched by the fires in California right now at 2.5 million acres.

Meanwhile, Oregon Governor Kate Brown says that hundreds of homes in the state have been obliterated by the wildfires. “This could be the greatest loss of human lives and property due to wildfire in our state’s history,” she warned, adding that the winds are fuelling the fires and pushing them toward towns and cities. Mass evacuations are underway. 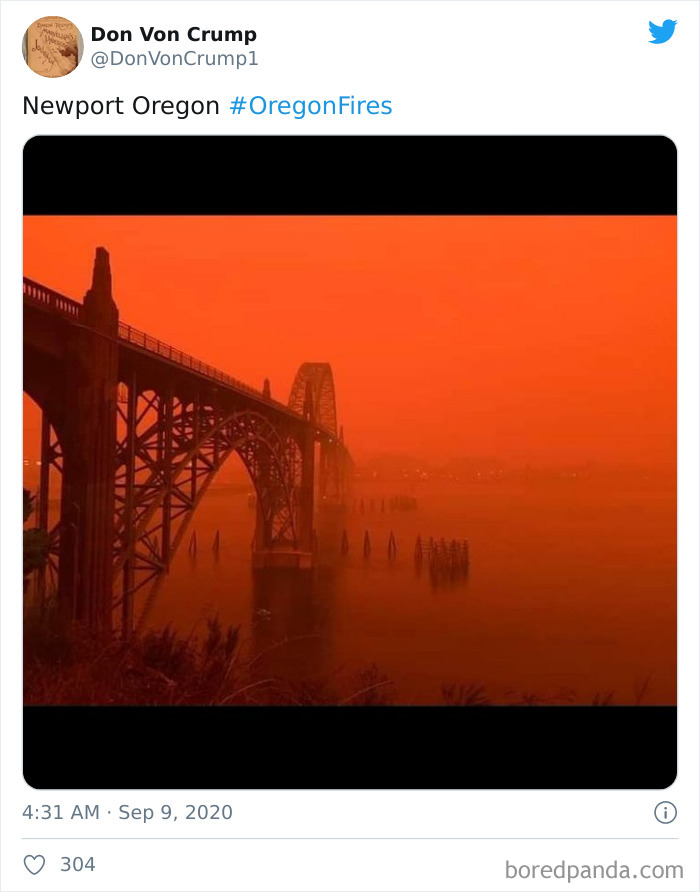 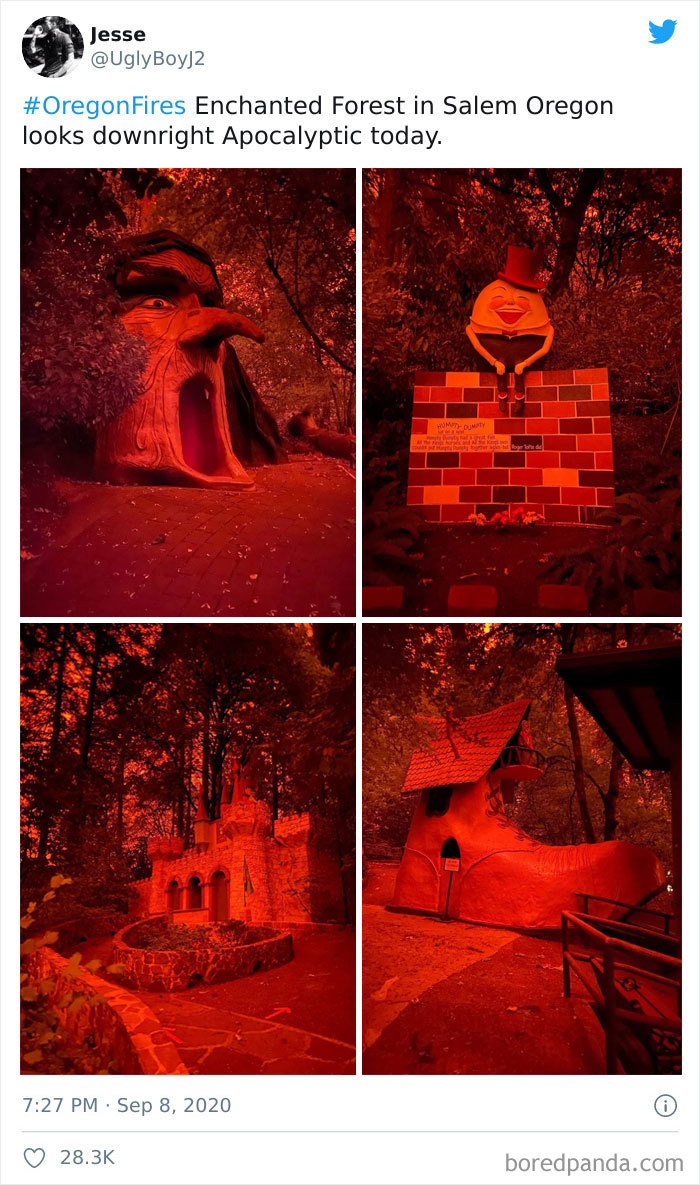 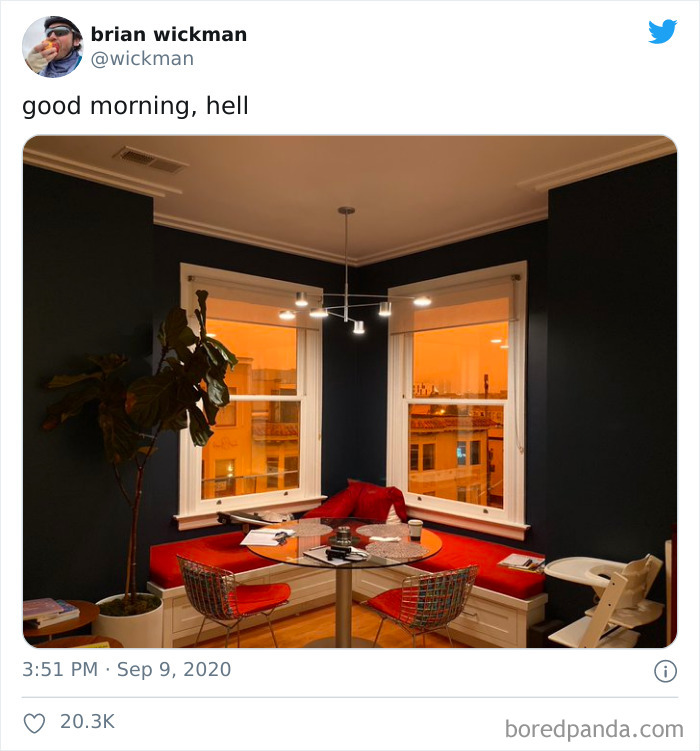 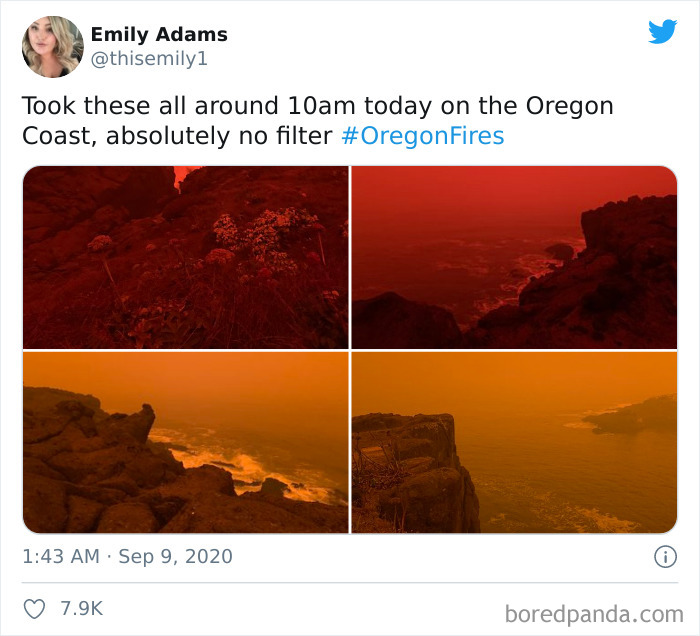 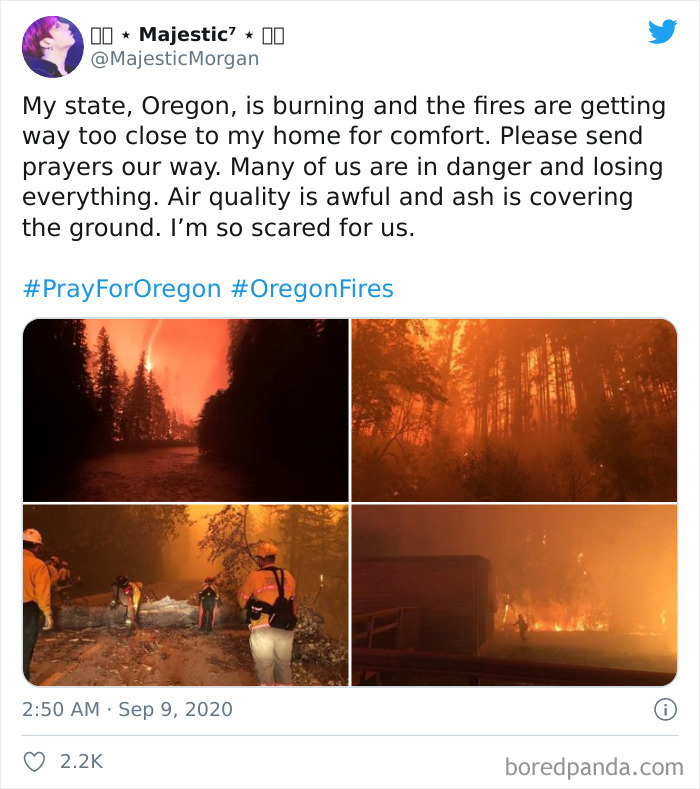 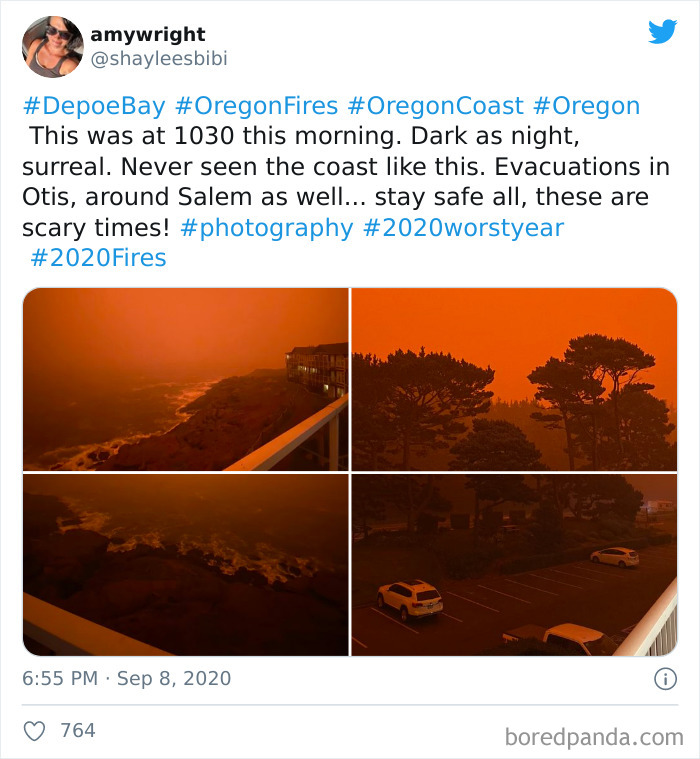 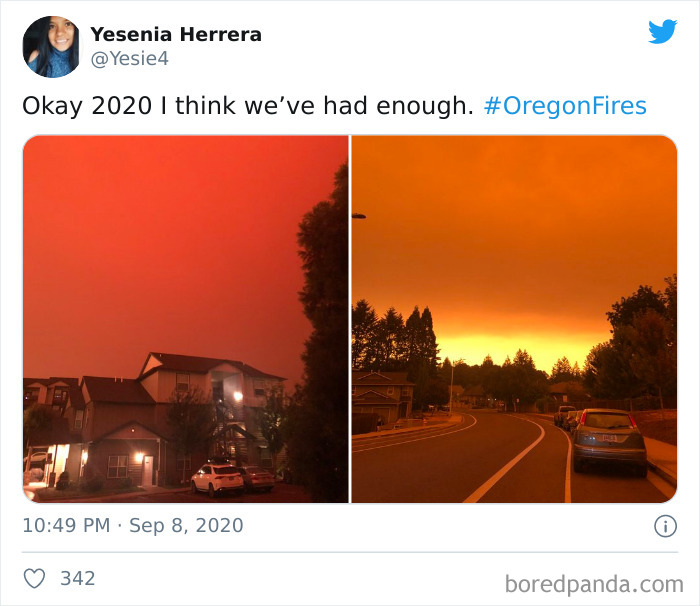 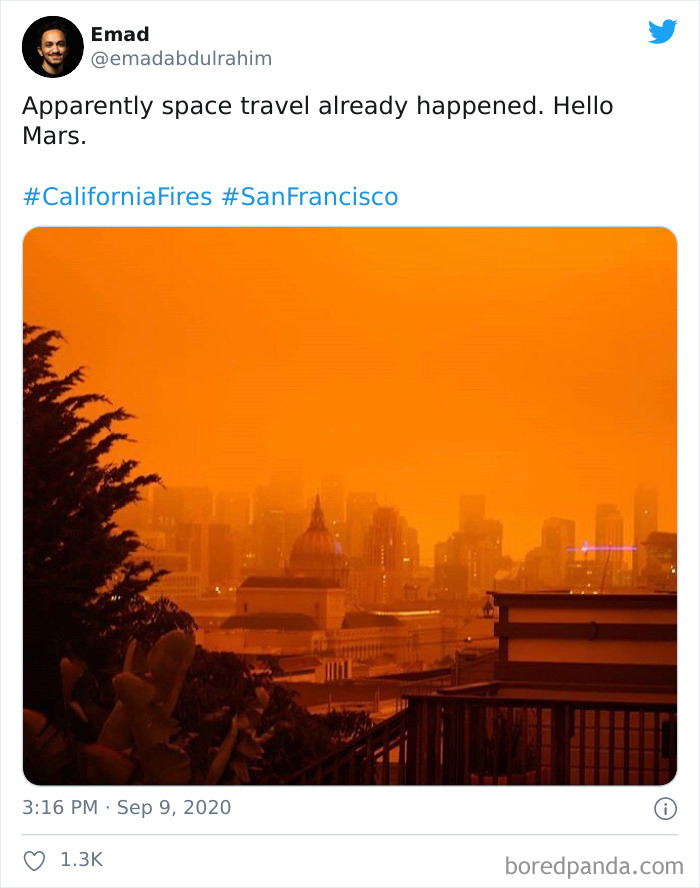 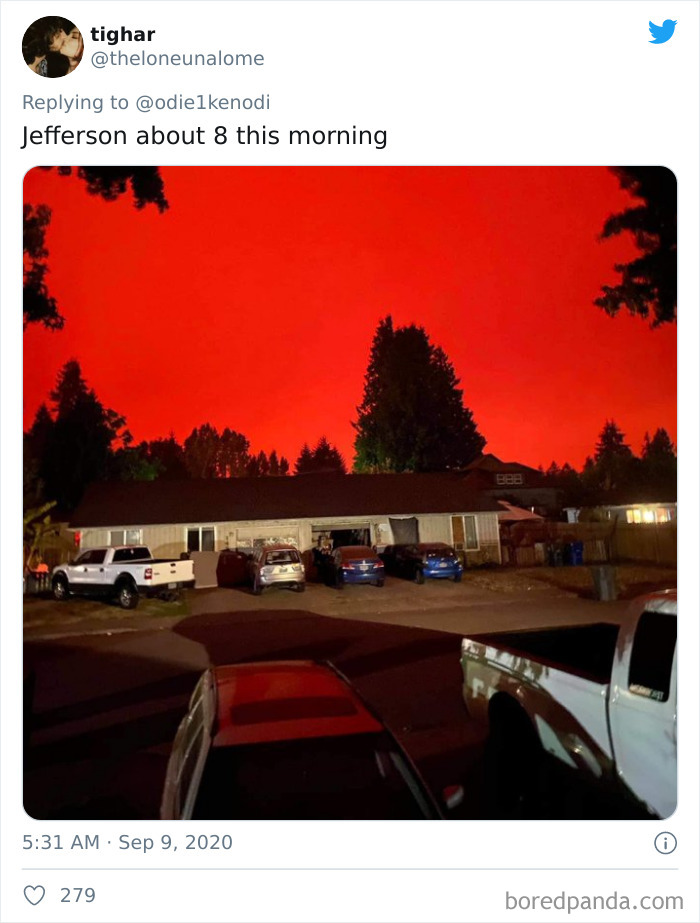 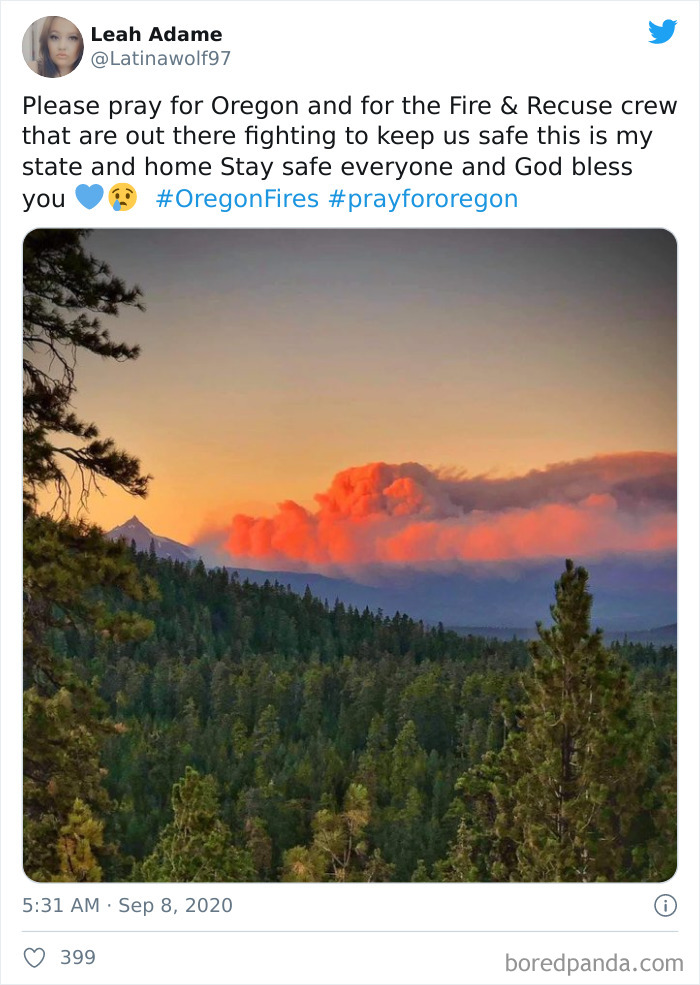 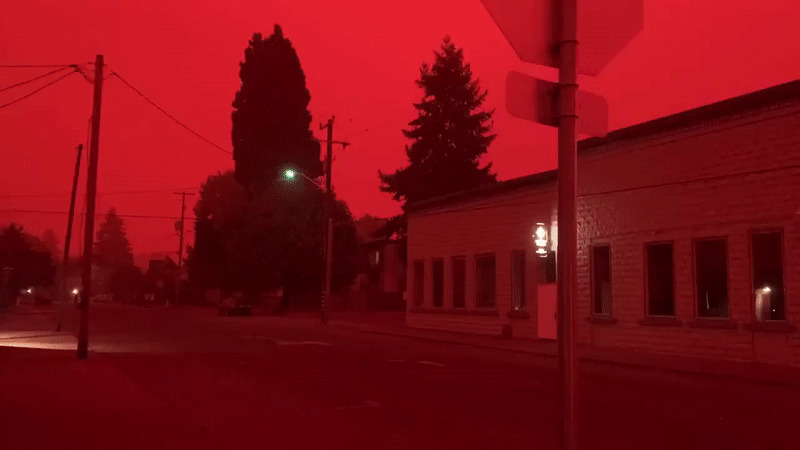 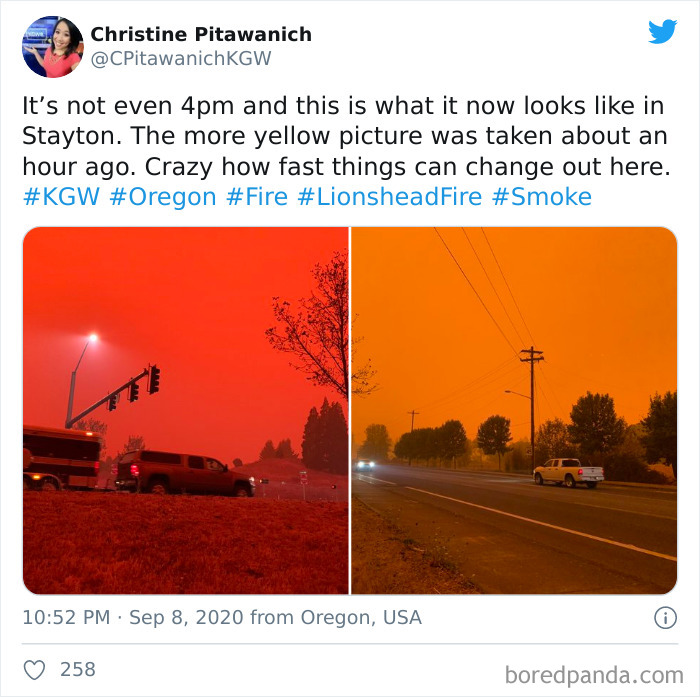 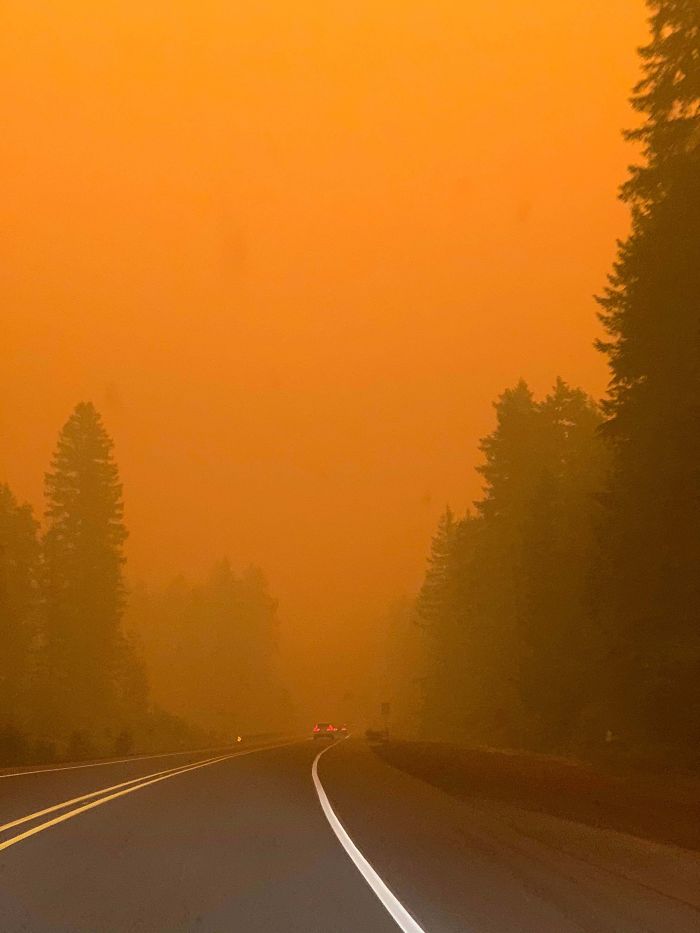 reddit.com – Oregon Cascades today. Orange smoke, 70 mile and hour winds, debris and branches all over the road. Keep the fire fighters in your thoughts 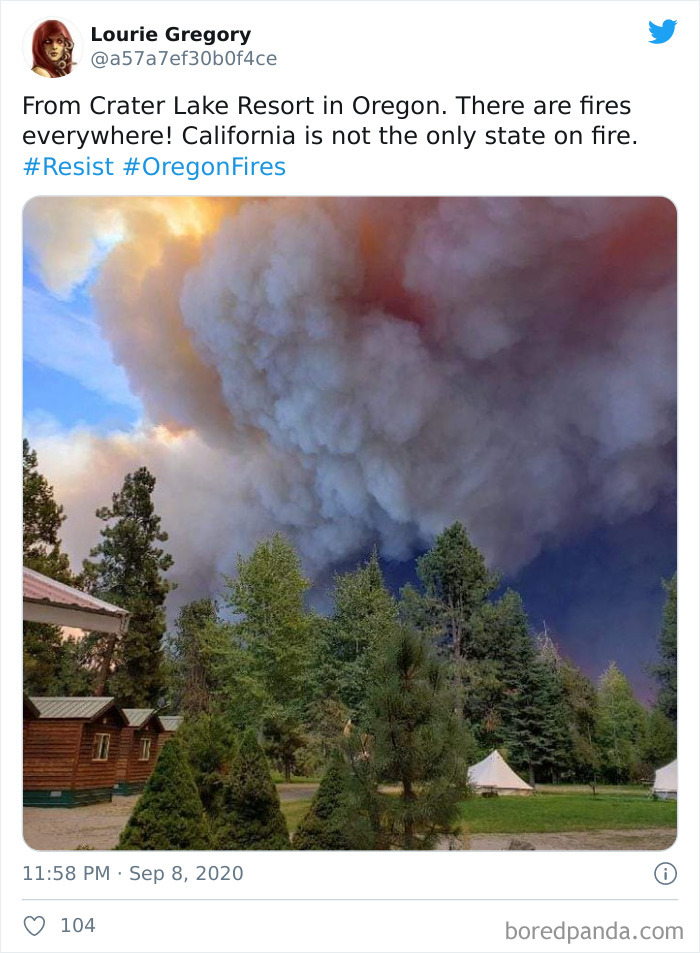 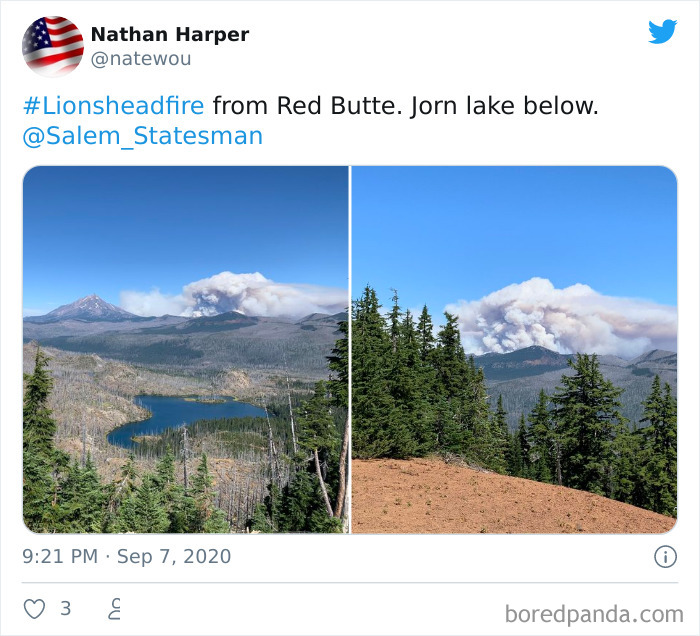 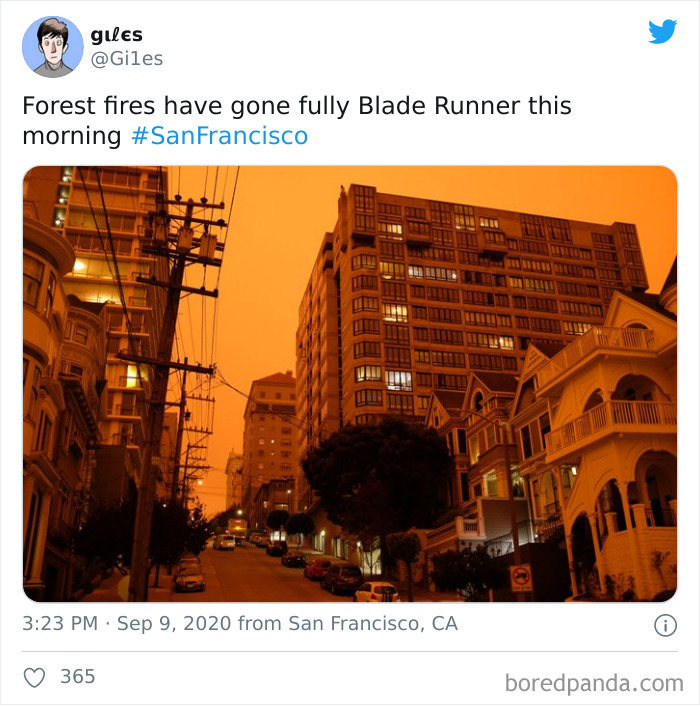 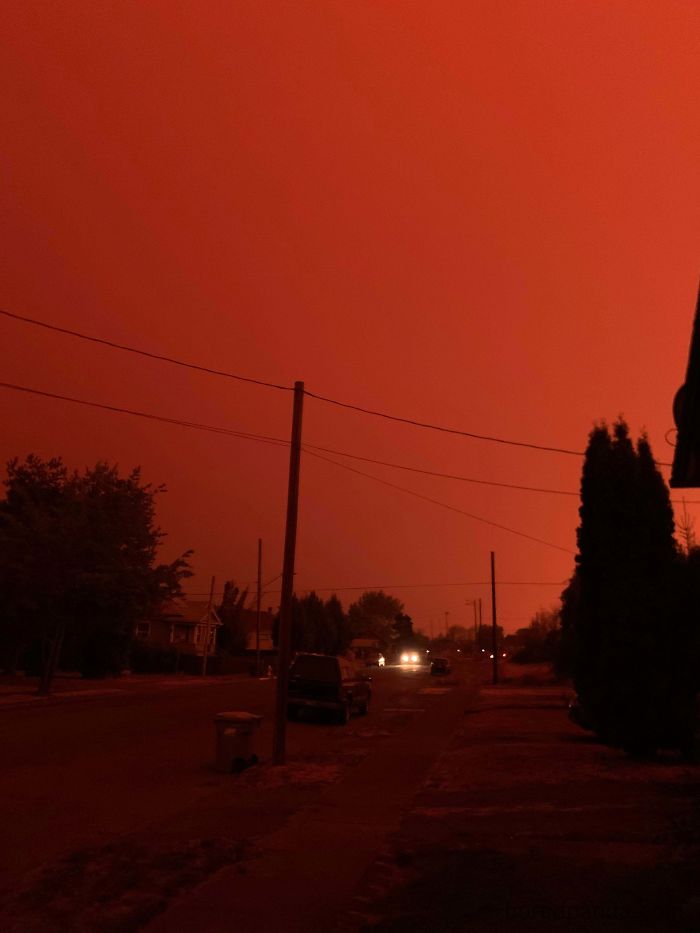 reddit.com – 8 am and surrounded by 4 fires in the area. 2020 is holding nothing back 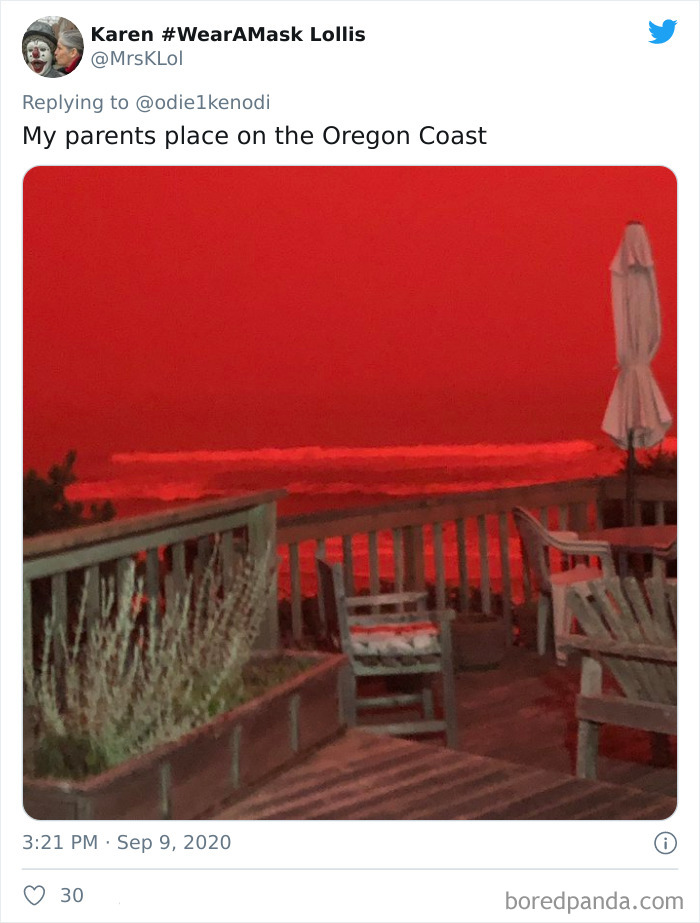 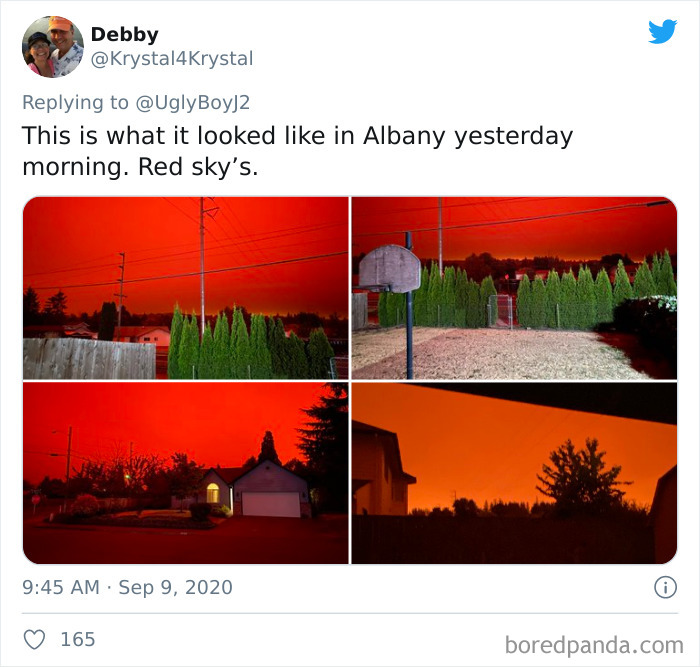 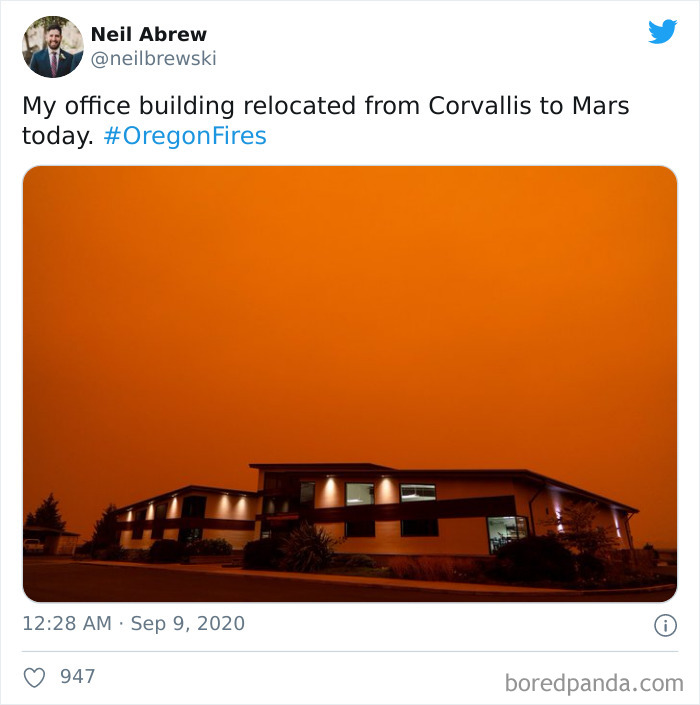 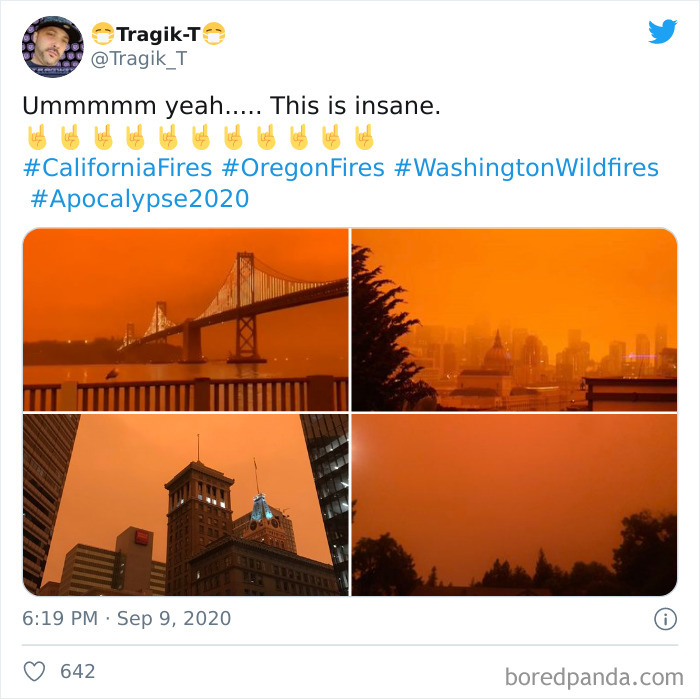 The Finals of Comedy Wildlife Photography Awards 2020 Have Been Announced Previous post
Meet Hina, the Friend Who Ruins All of Your Group Pictures Next post