This fantastic image that has been released in NASA‘s Astronomy Picture of the Day was taken by photographer Jheison Huerta, which shows how the Milky Way is reflecting over the enormous mirror in the world. This mirror or let’s say the world’s largest mirror is known as Bolivia’s Uyuni Salt Flat is very reflective after the rain. 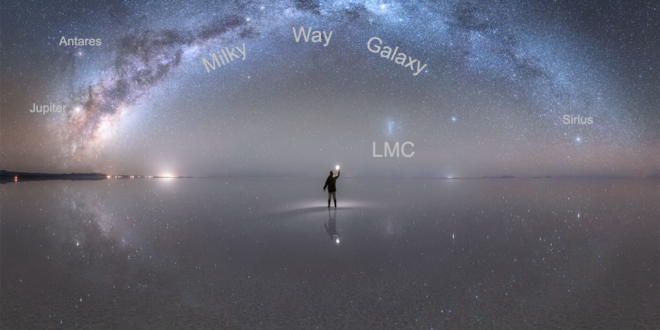 You can see galaxies, stars, and a planet in this breathtaking view. NASA further explained: “What’s being reflected in the world’s largest mirror? Stars, galaxies, and a planet. Many of these stars are confined to the grand arch that runs across the image, an arch that is the central plane of our home Milky Way Galaxy. Inside the arch is another galaxy – the neighboring Large Magellanic Cloud (LMC). Stars that are individually visible include Antares on the far left and Sirius on the far right. The planet Jupiter shines brightly just below Antares.”

The grand arch that runs across the photo is the central plane of the Milky Way Galaxy. On the right, you can see Sirius, and on the left, Antares is the most visible. The neighboring Galaxy, Large Magellanic Cloud, is inside the arch, and Jupiter shines brightly below Antares.

The photographer took the photo in April 2019 and made up of 15 vertical frames. They were taken consecutively over 10 minutes. Hundreds of thousands of people come to Uyuni Salt Flats every year to take some incredible photographs.

According to National Geographic, Salar de Uyuni is one of the most remarkable and extreme vistas not only in South America but on Earth as well. It is the world’s largest salt flat that was left behind by prehistoric lakes, and it is stretching more than 4,050 square miles of the Altiplano. Here, a thin layer of water transforms the flats into a fantastic reflection of the sky that gives you a feeling that you are in an unknown world.

15 Most Beautiful Places in the World (Part 1) Previous post
Lion Cub's Legs Were Broken So He Wouldn't Escape From Tourists Who Want To Take Pics. Thankfully, He Got Rescued And Treated Next post