Studies show that travel can make you smarter and healthier. So now grab a sheet of paper and a pencil, ladies and gentlemen. (Or in more modern terms, create a new note on Evernote.) It’s time to create that bucket list you’ve been meaning to write up:

About that second item …You’re going to need a few target destinations to lead your adventure. Don’t worry, we’ve got you covered. When on a journey to travel the globe, make sure each of these 10 amazing places to visit before you die is on the itinerary. 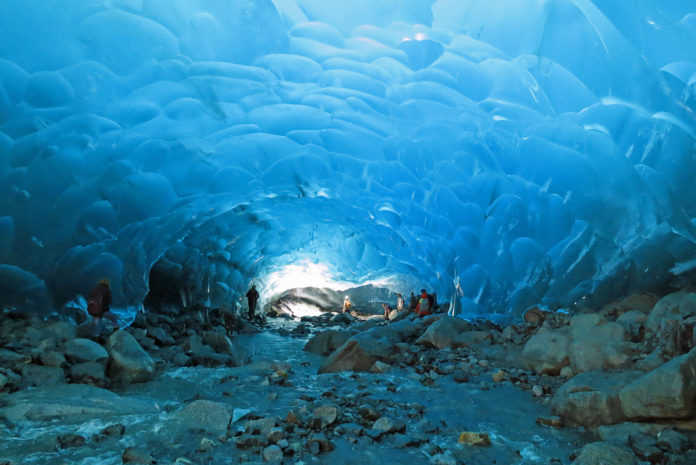 Kick-off your journey to the Mendenhall Ice Caves by heading to Juneau, Alaska’s state capital. As you venture inward, it’ll be impossible not to notice the supreme beauty that surrounds you.  Juneau is situated at the base of the 3,819-foot Mount Roberts on Alaska’s Inside Passage. The 17-million-acre Tongass National Forest, the largest national forest in the United States, covers the coastal mountainsides in Juneau’s isolated locale. While there are lots of exceptional activities for visitors to enjoy right inside the city limits, one of the most popular off-the-beaten-path attractions is a trek to the Mendenhall Ice Caves. 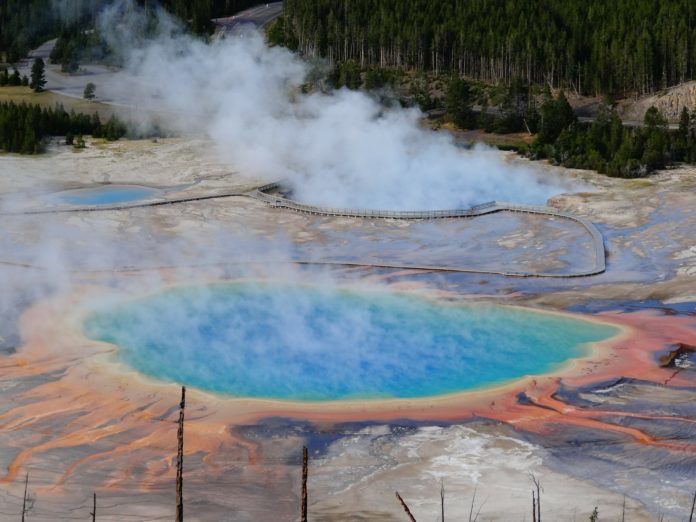 There are plenty of reasons to visit Yellowstone National Park. As well as being the first National Park in the world (designated in 1872), it’s a place of simply outstanding natural beauty. From geysers and waterfalls to forests and lakes, Yellowstone is bursting with things to do and see. Add in the simply ridiculous amount of wildlife you will come across and you have one of the most incredible places in the U.S.

No visit to Yellowstone would be complete without seeing the incredible Old Faithful geyser. While it’s easily the most touristy part of the park, seeing it erupt is still a special experience. The travertine terrace formations at Mammoth Hot Springs are located near the park’s North Entrance. Formed over thousands of years from limestone, the terraces can be explored via a series of boardwalks. The color and shape of the springs are constantly changing giving another glimpse into the amazing hydrothermal activity of Yellowstone. 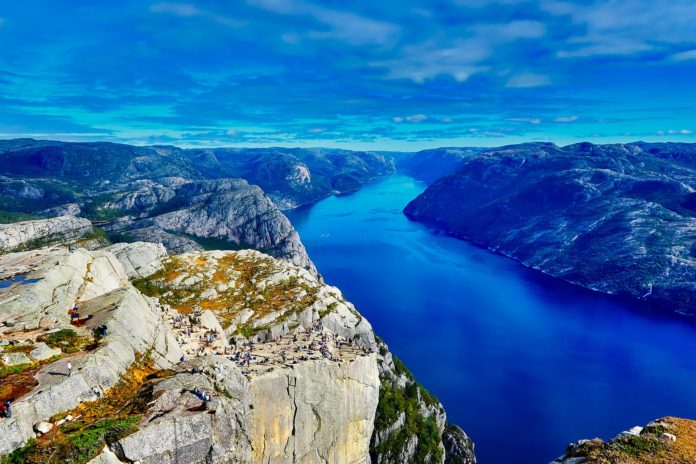 Preikestolen is one of the most popular tourist attractions in Norway. Every summer, well over 200,000 visitors make the climb up the imposing ledge and marvel at the view over LysefjordPreikestolen was ranked number one on CNN’s list of natural wonders of the world. It was named “the most spectacular viewing platform in the world” by Lonely Planet.

The rise and fall of the trail passes nice picnic areas and amazing spots for taking a swim. If you are used to walking in hilly terrain, the hike to the plateau takes about two hours. Children and those who do not have much experience will need more time. The round trip takes about 3-4 hours for someone of average fitness.

We recommend that you seek local advice and check the weather forecast. Use footwear suited for hiking, preferably mountain boots, and clothes suited to changing weather. Bring food and something to drink for the hike. 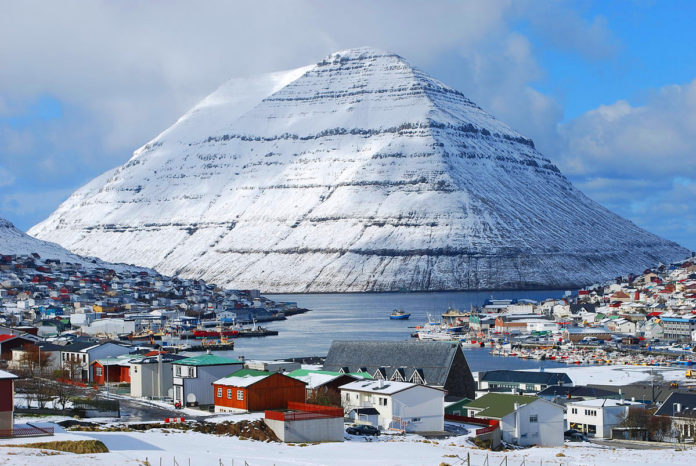 Take a journey to a magical land that will have you gasping in awe at every turn of the road and cheerfully delirious of mother nature’s beauty at every cliffside; a tiny island nation that is far from being bombarded by tourists called the Faroe Islands.

Located between Iceland, Norway, and Scotland, the Faroe Islands is a tiny island nation first inhabited over 1,600 years ago and at its present-day has a population of just over 50,000 people. An archipelago comprised of 18 islands, the majority of them are connected via bridge or underwater tunnel, while the smaller few can be accessed by ferry. There is very minimal flat land, and the islands shoot straight out of the sea in the most glamorous manner.

With just one airport, you’ll begin your journey on the island of Vagar, just an hour and a half flight from it’s much more touristy neighbor, Iceland. Public transportation is very limited, so it is recommended to rent a car from the airport. 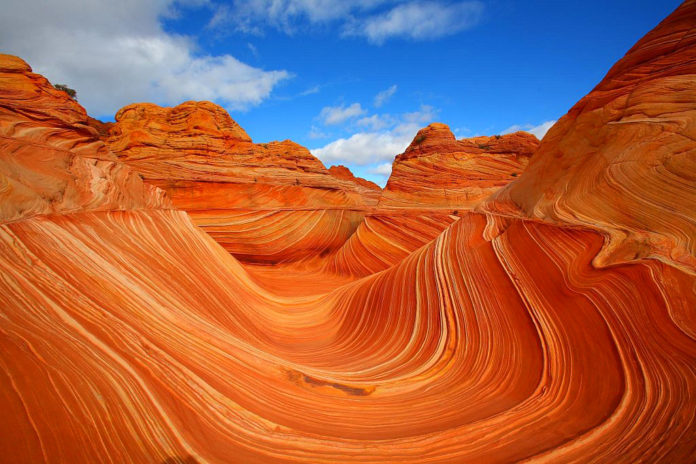 For hikers and photographers it doesn’t get much better than The Wave — a colorful sandstone rock formation in Arizona that’s been eroded by the wind to resemble an ocean wave. The site’s exclusivity only adds to its allure, as the Bureau of Land Management (BLM) has capped the number of daily permits at 20 — 10 online and 10 walk-in — in order to protect the formation’s fragile nature and provide visitors with a quality experience.

The Wave is located near the Utah-Arizona border in the Vermilion Cliffs National Monument. The site can be found in the Coyote Buttes North section of the park and is only accessible by foot. There is no trail to The Wave and visitors should prepare for a six-mile round-trip hike.

Access to Coyote Buttes North and The Wave is $7 per person, per day. To enter the online lottery for one of the 10 online permits, you must request the permit four months in advance, here. Travelers visiting the site in less than three months, can either visit the calendar on the permit page to see if there are any available slots or try their luck at applying for a walk-in permit. For the latter, guests must show up at the Grand Staircase-Escalante National Monument Visitor Center in Kanab, Utah from 8:30 a.m. (9 a.m. Daylight Savings Time in summer) to submit an application for one of the 10 walk-in permits. Credit cards are not accepted.

Read more: 45 Most Beautiful Places In The US To Add To Your Bucket List Right Now 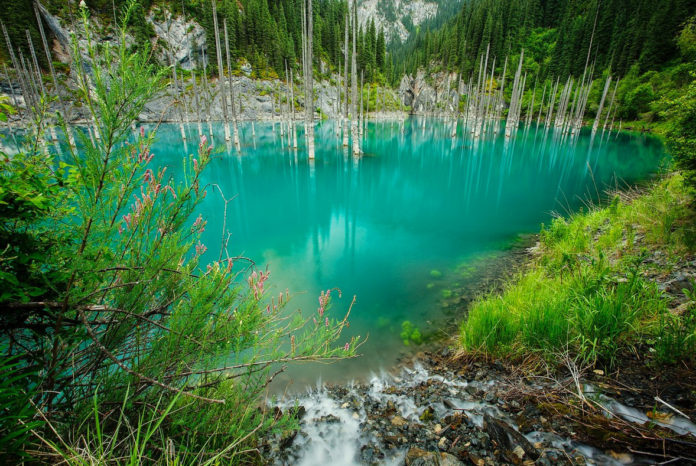 Nestled in a forested area in the Tian Shan Mountains, Kazakhstan’s Lake Kaindy invites those who visit to take a swim in a surreal underwater world. Created by an earthquake that took place in 1911, the freshwater lake is home to an array of fir trees that not only jet out from its waters but that call those who take a dive to explore an entire forest sunken under its clear waters.

When the earthquake hit, it created a natural dam that slowly filled with rainwater over the years, leaving the trees that were damaged during the earthquake submerged in the water, according to representatives from Almaty’s tourism board. While the petrified fir trees look just as fascinating jutting out of the depths of the water, what makes the scene all the more fascinating is that they still maintain needles on their branches more than 100 years later, a result of the cooler temperatures in the water that arises from its elevation of over 6,500 feet above sea level.

The lake is a popular location for divers looking to delve into an underwater oasis filled with lush forest remnants, while its clear mountain waters allow you to see into the depths of the lake to make the scene all the more striking. 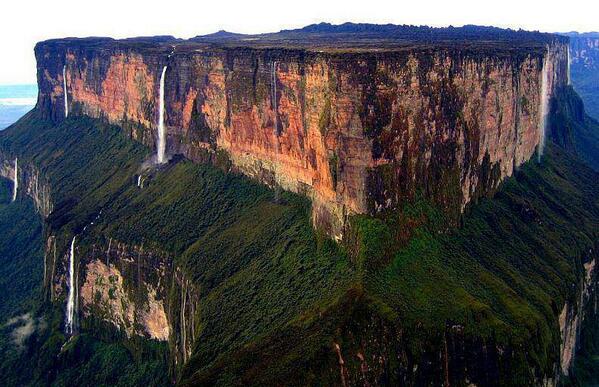 If you’re heading to Venezuela, you cannot miss the amazing adventure of hiking Mount Roraima in Canaima National Park. Arthur Conan Doyle populated the tepui Roraima with dinosaurs, strange vegetation, and animals in his book, The Lost World, based on the accounts of British explorers Everard IM Thum and Harry Perkins who were the first Europeans to ascend Mount Roraima in 1884.

Subsequent explorations and modern-day climbers and trekkers find no dinosaurs, fossils, or traces of prehistoric life on the top of the tepui, but they do find a fantastic world of crystal valleys, gorges, sandy beaches, mists and fog, fissures, rock formations, pools, and waterfalls. Mount Roraima is the tallest of the table mountains called tepuis and is located in the southeastern corner of Canaima National Park, near the borders of Brazil and Guyana.

This is the land of tropical savannahs, cloud forests, tepuis, rivers, and waterfalls. Roraima is one of the most recommended climbs in South America, and most people allow eight days for the trip.

Read also: 20 Out-worldly Places On Earth That Look So Unrealistic, But They Aren’t 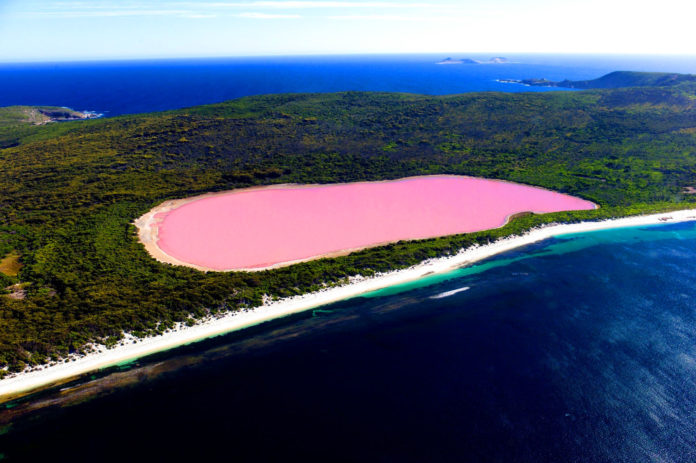 When you look at a map, lakes are universally marked with a pale blue color. But when it comes to Lake Hillier in the remote south-west of Australia, the cartographer should really reach for a pencil shaded somewhere between ‘flamingo’ and ‘fairy floss’.

Scientists believe the bubblegum color comes from the presence of Dunaliella salina, a microalgae containing a reddish pigment that thrives in salty lakes. Even when the water is scooped up into a container, the liquid retains its pink hue.

The best way to see Lake Hillier is from above, with a bird’s eye view of its vibrant colour. Departing six times a day, seven days a week, Goldfields Air Services can fly you from Esperance over the white sand beaches and turquoise water of Frenchman’s Peak, the Cape Le Grand National Park and Lucky Bay before cruising over the picturesque Lake Hillier, the photo opportunity every visitor is desperate to stick on their Instagram. 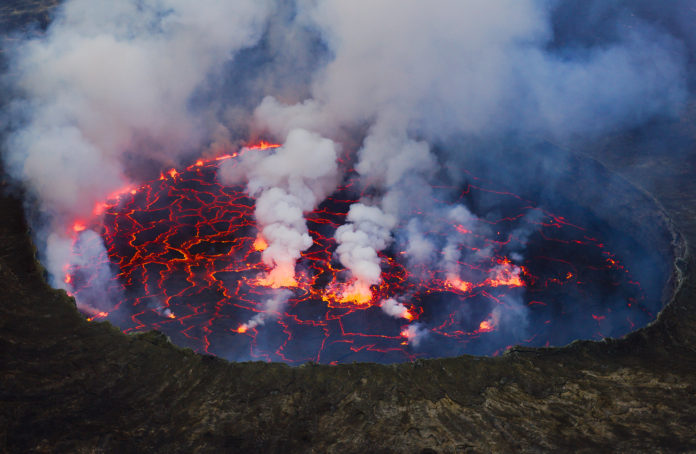 Mount Nyiragongo, Virunga National Park, the Democratic Republic of the Congo. An active volcano is famous for housing the biggest lava lake in the world. The volcano’s slopes are steep and lava is very fluid, thus enabling it to flow in high velocity when it erupts.

However, the lava lake is not constantly present. It takes years to form and after that, it is a question of days when the walls of the crater will crack and lava erupts. The last eruption took place in 2002. As for today, the volcano’s activity is being carefully monitored, lava is again slowly rising and forming a lake.

Why to go there?

10. The Door to Hell, Turkmenistan 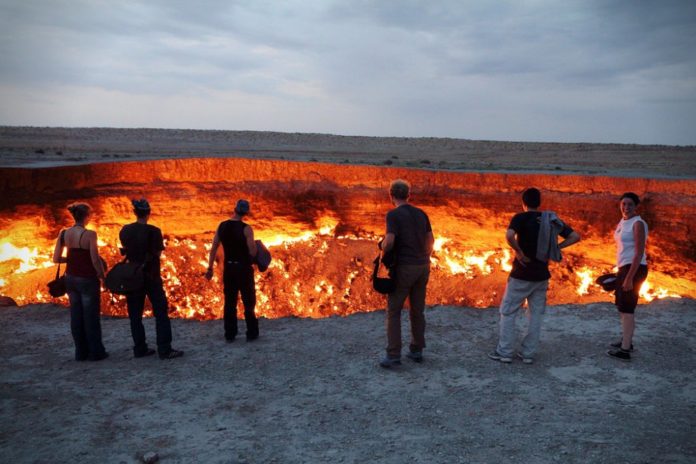 Aptly named, the Door to Hell in Turkmenistan is a gaping, 226-foot-wide hole that was created in 1971, when a Soviet drilling rig collapsed into a natural gas cavern. It’s been burning ever since. The natural gas combined with the drilling rig to burn and has been incessantly burning since then. Its surrounding spots are very popular with visitors looking to camp in the midst of a wild desert.

Variously and evocatively known as the Crater of Fire or the Gate to Hell, the Darvaza crater is a football pitch-sized natural gas crater that’s been on fire continuously for more than 40 years. And it’s quite a sight. Enough to have lured more than 50,000 visitors to its fiery edges over the past decade, helped by the fantastic wild camping in the surrounding Karakum Desert.

Our and Our Neighbor’s Cats Found Catnip and Cat.exe Stopped Functioning (+15 Pics) Previous post
Pixie And Brutus Reached 2.3M Followers On Instagram And Here Are Their Latest Comics Next post