In 2015, Italian photographer Marco Grassi traveled more than 18 hours by bus to Larung Gar, a remote town in China’s Sichuan province, and home to the largest Tibetan Buddhist institute in the world.

Marco Grassi is a self-taught landscape and travel photographer. After returning from a one-year trip around New Zealand’s breathtaking scenery, he realized it was time to buy his first camera and start capturing the beauty of this world. Two years later, he achieved his goal after having traveled non-stop around the world.

Below, he shares the story behind the breathtaking shots he brought back from his trip to the largest Buddhist settlement in the world. Read on as he reveals how he captured these photos—from his shooting techniques to post-processing workflow. 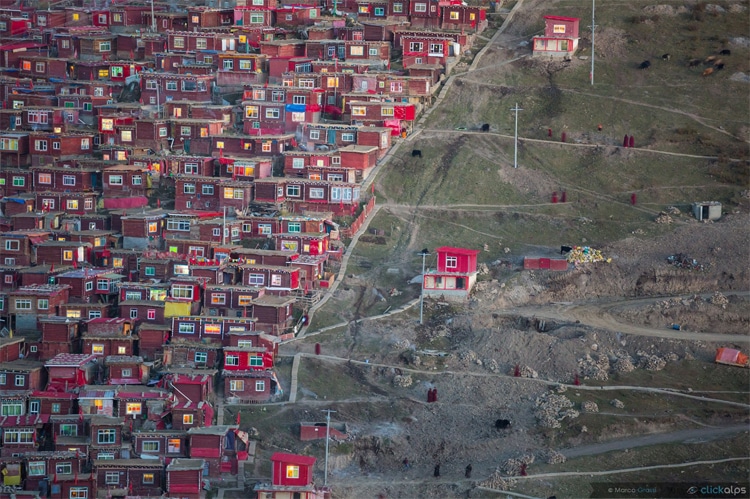 Grassi photographed the closely stacked red buildings in the valley before the Chinese government ordered a series of demolitions at the monastery. This week, Human Rights Watch said that the authorities are also preparing to roll out tighter administrative controls on the settlement.

The area is no longer accessible to foreigners after demolitions began in summer 2016. Those who wish to enter must pass checkpoints at the site and on the road from the nearby town of Serthar. 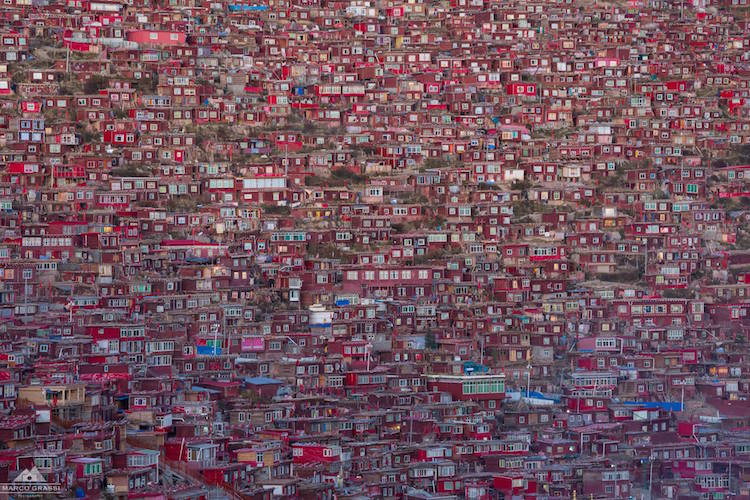 “Last October, I traveled to Larung Gar in Tibet, a surreal place with thousands of red houses built one on top of each other. It’s the kind of place where you have to pinch yourself to believe you’re not dreaming. Situated in a remote area of West Sichuan, Larung Gar is home to what is supposed to be the largest Buddhist college in the world with more than 10,000 monks studying and living there. The whole trip took me approximately 18 hours by bus on a bumpy road. And when I finally reached this destination, the view blew me away. I suddenly started wondering several things, like how does it look like to walk through those tiny houses, and how do they even recognize their homes?” – said the photographer. 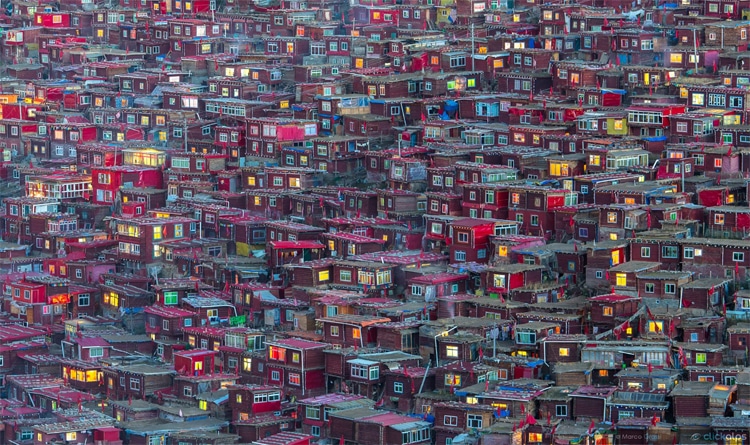 “During my stay there, I found out that they have very basic facilities—not even a toilet inside their homes. Walking around the village was like being inside a maze. It was a chaotic and busy place, but it was still very organized, thanks to the routine that this entire community had developed over the years.”

“It’s hard not to be inspired by such an incredible and unusual place. I simply couldn’t believe my own eyes by what I’ve witnessed.”

“I was there in a very particular moment: all the monks and nuns were in a sort of ‘retreat,’ spending the morning and afternoon inside their houses reading books, praying and having time for themselves. They would only exit during the evening to buy what they needed. There were only a few monks and nuns around during the day and their routine was pretty simple: a walk during the morning, lunch in a local place in the village and more prayers in the afternoon.” 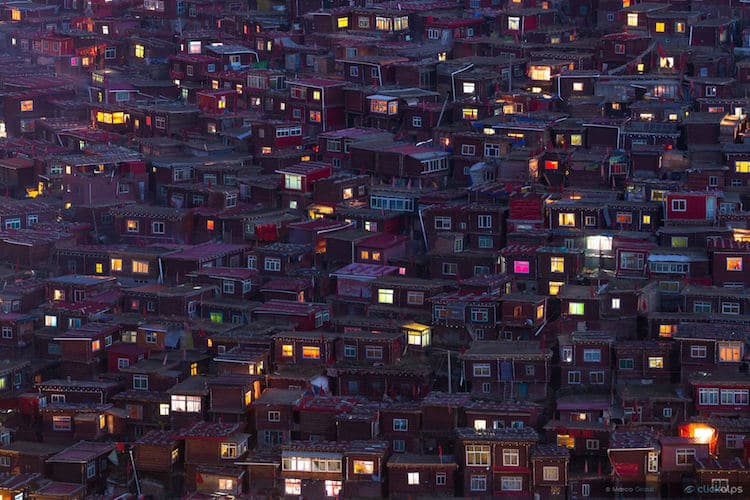 Grassi described the village as “chaotic and busy,” but said it was organised according to a logic of its own. “How monks and nuns find their home is still a mystery for me. I asked them when I was there, but all I got was a kind smile and these words: ‘We all know where our home is.’”

Grassi added that one of his friends who was running a hotel in Larung Gar was forced to leave after tourism declined. 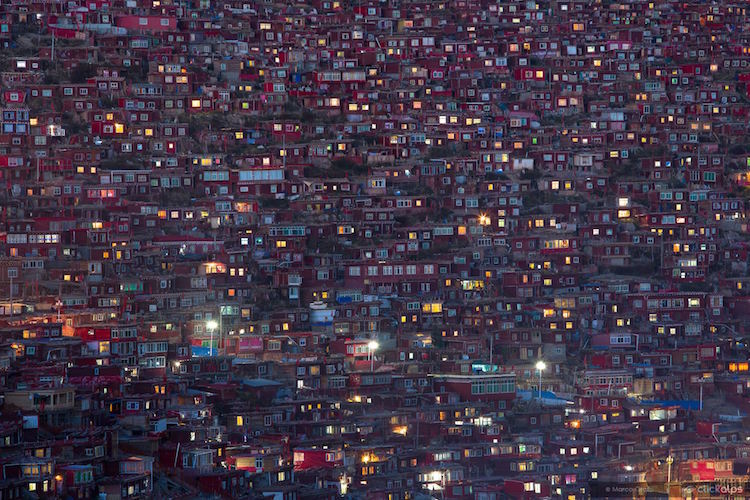 Grassi was inspired by his trip and started leading photography workshops to Larung Gar and surrounding Tibetan regions, but he was forced to put them on hold after officials started restricting access.

In November 2016, six United Nations experts wrote a letter to China expressing “grave concern over the serious repression of the Buddhist Tibetans’ cultural and religious practices and learning in Larung Gar and Yachen Gar [another Tibetan Buddhist complex].” 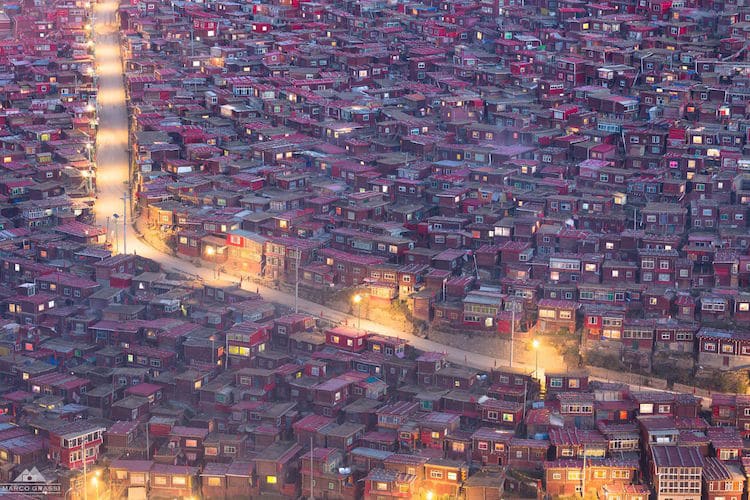 Chinese officials have said that the complex is being rebuilt to improve safety and public health, citing overcrowding and a risk of fire.

15 Of The Incredible Winners Of The 17th Edition Of Smithsonian Magazine's Photo Contest Previous post
The Perfect Gift For 'Harry Potter' Fans: Memo Pad That Reveals Hogwarts Castle As You Tear Each Sheet Next post