For hundreds of thousands of years we lived wired, primed for fight or flight. Adrenaline coursed through our bodies. Then in a matter of a few centuries we lost it, all our instincts for survival in the wild replaced with fluffy towels and cushions. And yet somehow we know we’re missing something. We fight to get it back. It’s why we bungee jump from bridges and climb mountains; it’s why we base jump off tall buildings. We want the rush back. And it’s why lately we’ve become fascinated with the idea of a hotel underwater.

You can’t get much more pampered than a luxury hotel. If we could just get one underwater, it would put us back in touch with the wild, give adventure to our lives. Plus, we wouldn’t have to give up the fluffy towels to do it.

Underwater resorts are still largely a product of a vivid imagination. Some hotels are in the planning stage, some are currently under construction, but a few hotels already offer the possibility to spend a holiday with the fishes.

From partially submerged luxury suites to actual submarine stays, we present to you the 11 most spectacular underwater hotels on the planet. 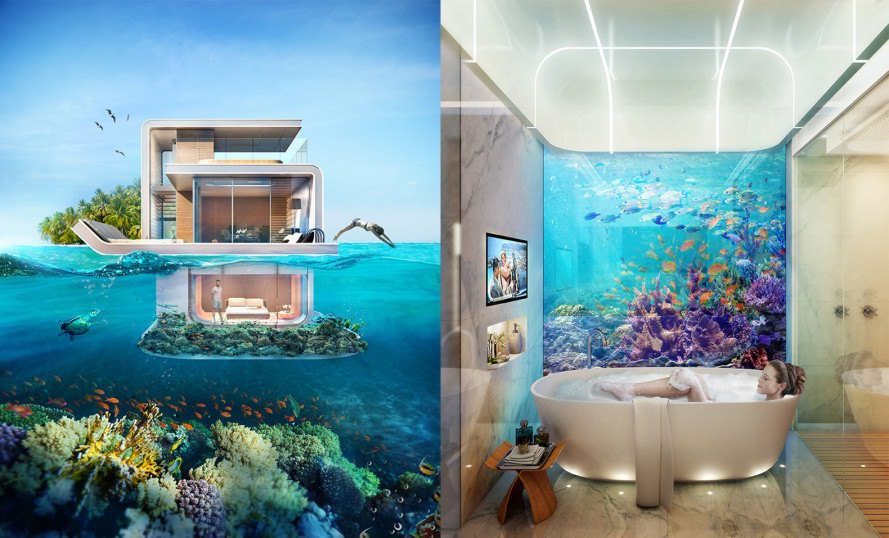 The master bedroom and bathroom are located on the submerged level and are surrounded by floor-to-ceiling windows for panoramic views of the Persian Gulf waters and coral reef.The Seahorse homes are selling for 6.5 million AED ($1.8 million) and are, despite its monstrous price tag, selling quite well. Of the 42 units that are being constructed, at least 35 have already been sold.

Each 1,700-square-foot luxury retreat comprises three levels, two of which are above water and one located below. 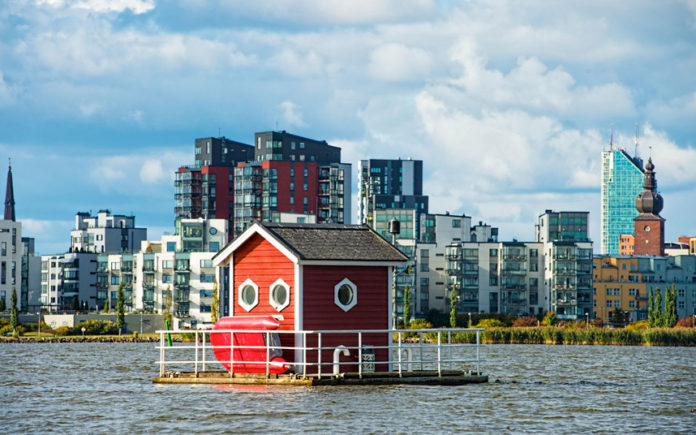 For around $75 a night you can stay at the two-room floating art project by Mikael Genberg. Anchored a kilometer out on Lake Malaren, one room is above the water, the other ten feet below. The two are connected by what is essentially a ladder. To reach the hotel, you’re taken from the port of Vasteras by boat, and then left alone with some instructions. It sounds a bit like a low-budget Bond movie. “Get out of this, Mr. Bond.”

One way out would be the inflatable canoe, which you can use to visit the nearby uninhabited island. Don’t expect to be blown away by the amenities at Utter. The bedroom below the water is fitted with two beds and a table. But with windows on all four sides looking out on what swims beneath Malaren, this is one of the few options available that puts you anything close to marine living. And if you want to ramp it up a bit, you can spring for the deluxe option, which gets you dinner delivered. 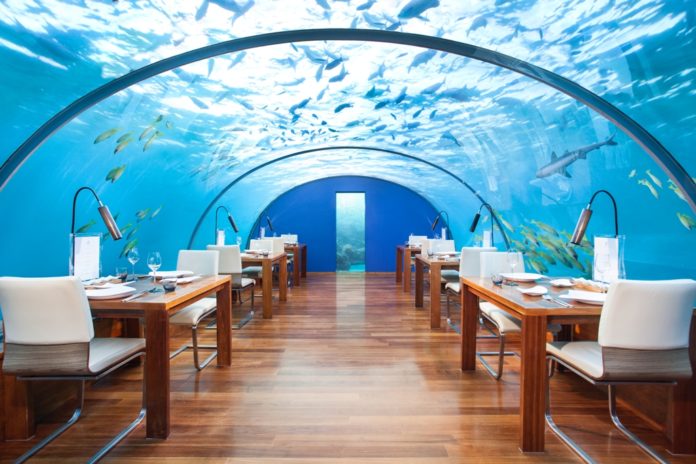 Situated on two interconnected islands in the Indian Ocean, Conrad Maldives Rangali Island is a one-of-a-kind resort that sits in perfect harmony with the natural environment.

With an experience that spans aquatic gardens, intuitive service, rare marine life, dining below the waves, and unparalleled views of the Indian Ocean, Conrad Maldives Rangali is an idyllic island paradise.

Nestled in the South Ari Atoll, renowned for its abundant flora and fauna, the resort features villas and suites tucked amongst natural greenery and dotted above the Indian Ocean, 12 award-winning restaurants and bars, two tranquil spas and a curated collection of locally inspired experiences designed to connect adults and children with the charm of Maldivian culture.

This tropical paradise actually occupies two connected islands, each with their own charms. Walking the illuminated bridge between them as the sun sets, you’ll see manta rays swimming in the crystal blue water. Get even closer to ocean life by snorkeling on nearby reefs. Or stay dry and watch the fish at the amazing Ithaa undersea restaurant. With a kid’s club, dedicated watersports center, and activities for the go-getter or the beach bum, the Conrad Maldives Rangali Island Hotel connects everyone to the charm of the Maldives. 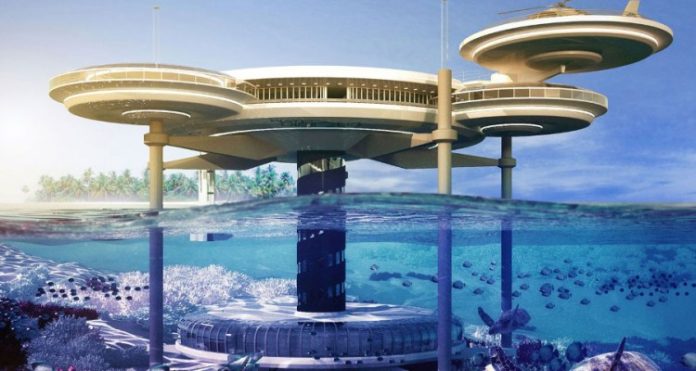 The hotel’s original plan was to be located 20 meters underwater off the coast of Jumeriah beach. The hotel’s plan is to cover an area of 260 hectares, which is equivalent in area to Hyde Park in London. It is one of the biggest construction projects in the entire world.

The land property where the hotel will be placed belongs to the Prince of Dubai, and with the support of the Prince, many companies grouped to begin this extraordinary project that looks like future nowadays, and around 150 companies are involved.

The construction cost for Hydropolis is approximately 600 million Euro, which will make Hydropolis one of the most expensive hotels ever created.

The underwater hotel was designed by Joachim Hauser and Professor Roland Dieterle, and is planned to be composed of three segments: a land station, a connecting train, and the underwater hotel. The main idea of this construction is to link humans to water.

Discreetly tucked away on one side of the world’s largest aquarium, guests here are treated to five-star comfort and personalized butler service whilst enjoying spectacular views of this underwater sanctuary. Each of these 11 exclusive suites is designed like a deluxe two story townhouse offering guests with the best of both land and sea. The upper level consists of an open living area leading onto an outdoor patio and Jacuzzi whilst the lower level offers guests with an underwater view of over 40,000 marine fishes in the comfort and privacy of their own suite. 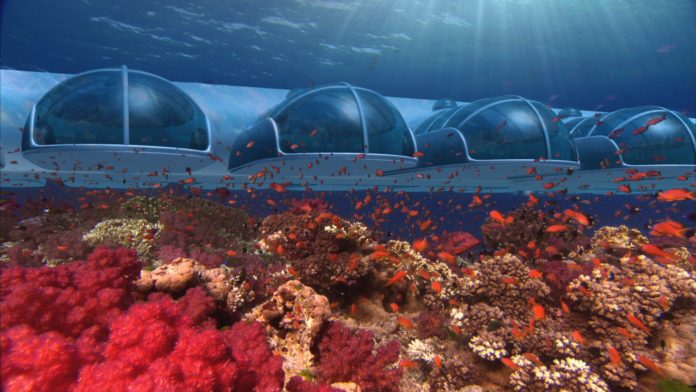 Imagine a chain of five-star underwater resorts; imagine piloting a personal Triton submarine through the lagoon down to the undersea chapel to where your beloved waits, anxiously holding her breath; imagine dining in culinary excellence beneath the ocean; imagine riding on a luxury submersible. And keep imagining, because so far it hasn’t happened. And yet, plans for a second resort are already under way. 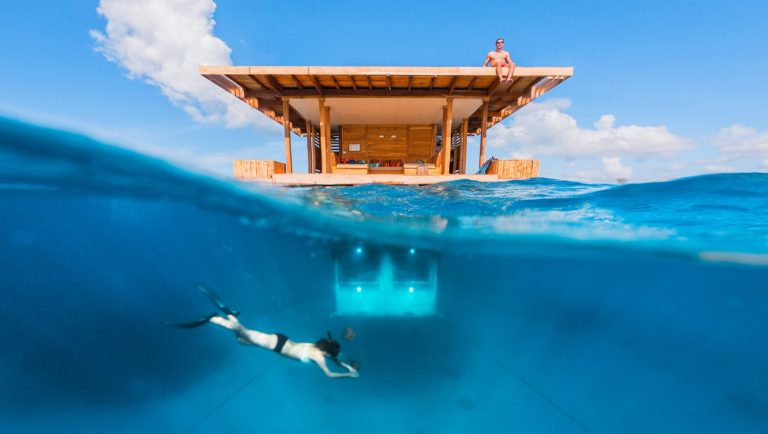 Anchored off the Zanzibar coast, if the floating Mantra Underwater room looks like an uptown version of the Utter Inn, it’s because this is also a Mikael Genberg design. Thirteen feet below the surface this time, there are three levels. At sea level the landing deck has a lounge area and bathroom. The roof is for soaking up the sun during the day, and star watching at night. Downstairs below the waves is a double bed and 360 degrees of underwater panorama. 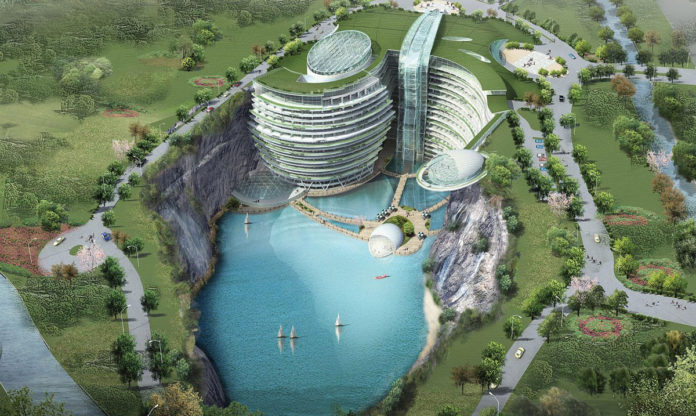 Thirty miles outside of Shanghai, construction is under way on this 19 storey hotel located  at the base of the Tianmenshan mountain in an abandoned, water-filled quarry. The bottom two floors will be underwater, and will feature a restaurant and guest rooms that look out onto a glass-walled aquarium. Built into the surrounding landscape, the resort will offer watersports, rock climbing, and bungee jumping. 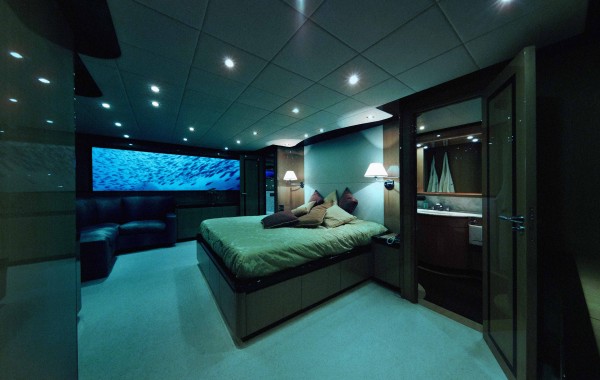 Billed as the premier entry into the mile low club, Lovers Deep is the luxury leisure submarine for lovers who like it deep. No one’s trying to hide anything here. At $150,000 per night, this is one of the most expensive places you can go for a shag. But if you’re out to impress, it definitely one-ups a rose snagged off the deli on the way home from work.

Also, it’s unlikely anyone is going to barge in on you uninvited. Unless by chance it’s the Captain’s cheese doodle you happen to be snacking on. Actually, he’ll be occupied at the other end of the vessel sharing sound-proofed quarters with the butler and chef, or steering the sub of seduction to your destination of choice – stunning coral off St. Lucia, or a sunken battleship in the Red Sea. Featuring a two-person shower and specialist aphrodisiac menu, there’s no room for doubt as to what you’re supposed to be doing here. 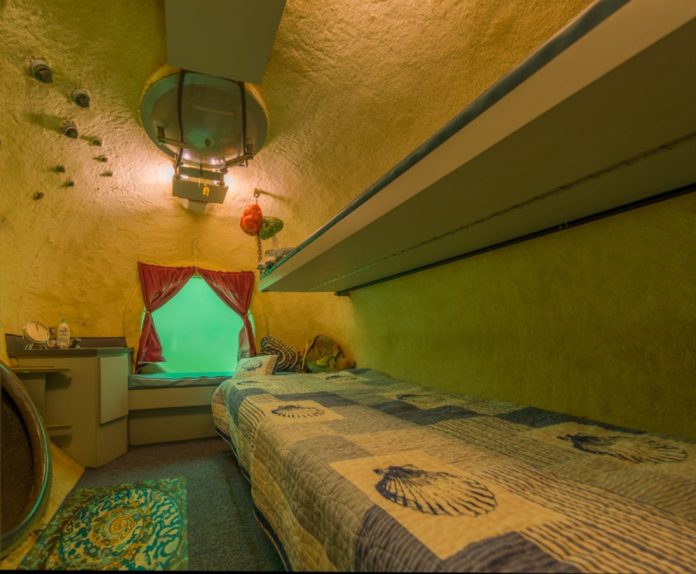 Jules’s Undersea Lodge is aptly named after the author of Twenty Thousand Leagues Under the Sea and is the oldest underwater hotel, surrounded by angel fish and other dazzling species off the coast of Florida and near Puerto Rico.

Getting there is somewhat of a challenge – it’s located 21 feet beneath the surface of the sea so you’ll have to scuba dive down into the foyer. But once inside, what used to be a research lab is now a very cosy accommodation where you can treat yourself to pizza for dinner or book in a ‘mer-chef’ who will scuba down to prepare your meal. Intrepid couples can stay the night here for $800 between two. 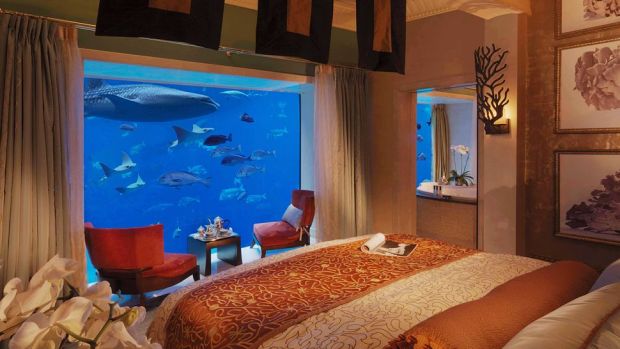 Located on the kingdom’s man-made, palm tree-shaped island, palatial Atlantis The Palm is one of Dubai’s most impressive resorts, part blockbuster luxury hotel (more than 1,500 rooms and suites!), part aquatic wonderland. The hotel’s signature underwater suites have breathtaking underwater views, including the “ancient” ruins of the mythical lost city of Atlantis and its 65,000 marine inhabitants. With floor to ceiling windows looking straight into the hotel’s Ambassador Lagoon, you will be blown away. And if that’s not enough, the suites come with a 24/7 private butler, massages and a dolphin encounter.

Someone Put A Rock To Prevent Drivers Going Over The Curb And It Becomes An Overnight Attraction Because The Cars Can't Seem To Avoid It Previous post
According To NASA, The World Is Greener Than It Was 20 Years Ago, And You'll Be Surprised To Find Out Why Next post
We use cookies to ensure that we give you the best experience on our website. If you continue to use this site we will assume that you are happy with it.OkPrivacy policy