If you’ve been driving for long, there’s a small chance you haven’t encountered bad roads. Road hazards and accidents can mar an otherwise eventful journey. While poor roads can cause plenty of damage, you can’t rule out the contribution of drunken folks and human error of judgment in causing accidents. Here’s a list of the world’s most dangerous roads. 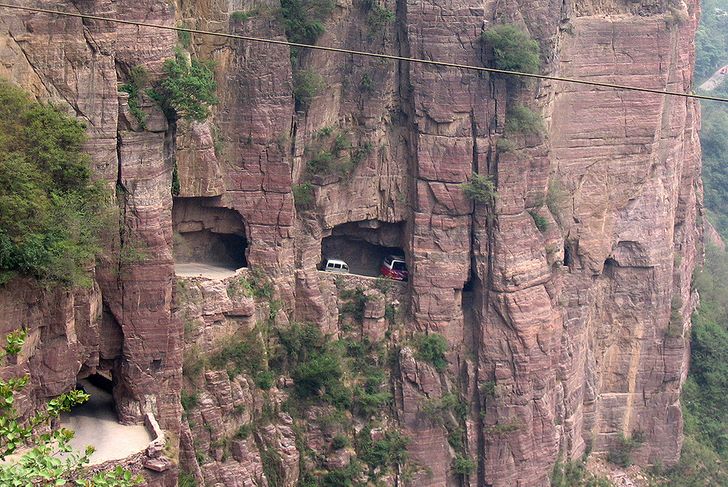 The Guoliang Tunnel is 1.2 km (0.75 mi) long and was built through a mountain range leading to the village of the same name. In the 1970s, the inhabitants of the village made this tunnel and the “windows” in it themselves using only hand tools. The width of the tunnel is about 4 m (13 ft), so drivers have to be extremely careful. 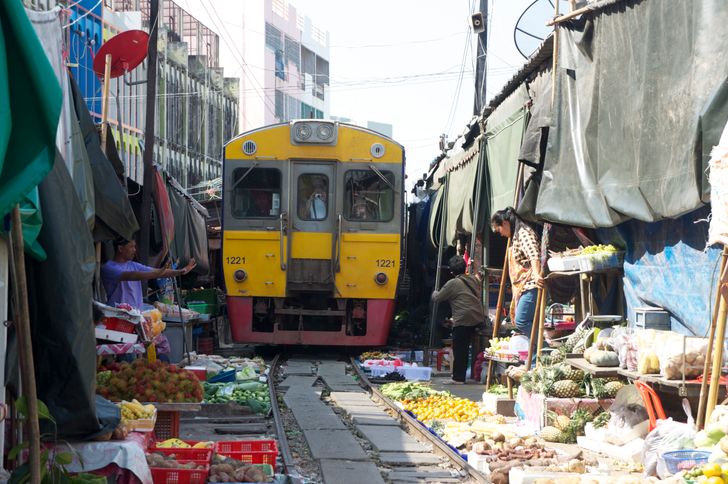 At first sight, Maeklong Market resembles hundreds of other Thai markets…but only until you hear the whistle of the train which passes right through the market stalls. The sellers take their goods away and fold their tents in seconds, giving way to the train that moves at a speed of about 15 km/h. 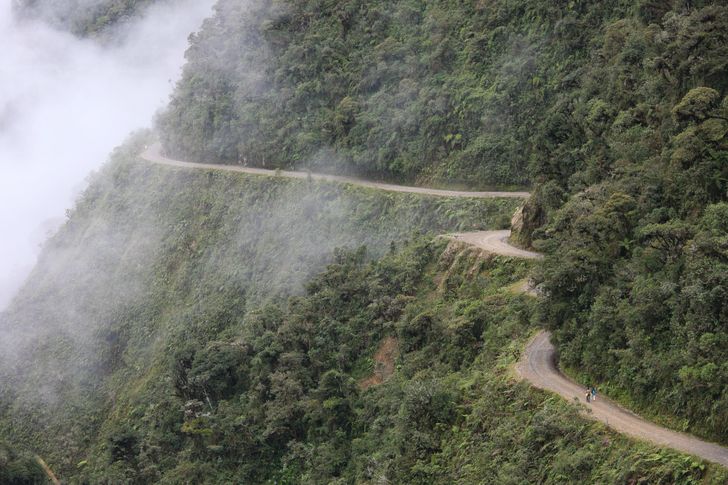 Yungas Road connects the Bolivian cities of La Paz and Coroico. Descending from a height of 3,300 to 360 m (2 mi to 1,181 ft) above sea level, it forms a number of loops. Despite the fact that the road is very narrow, even trucks manage to pass each other. However, one of them often has to back up for quite a distance.

#4 The “Nose of the Devil” Railway, Ecuador 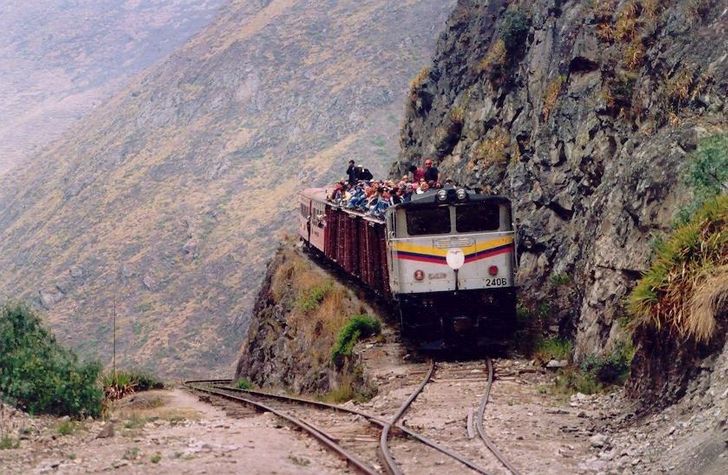 The “Nose of the Devil” railway is built on the rock of the same name at an altitude of 800 m (2,624 ft). Until recently, tourists were allowed to ride on the roofs of wagons running here, but today it’s prohibited. 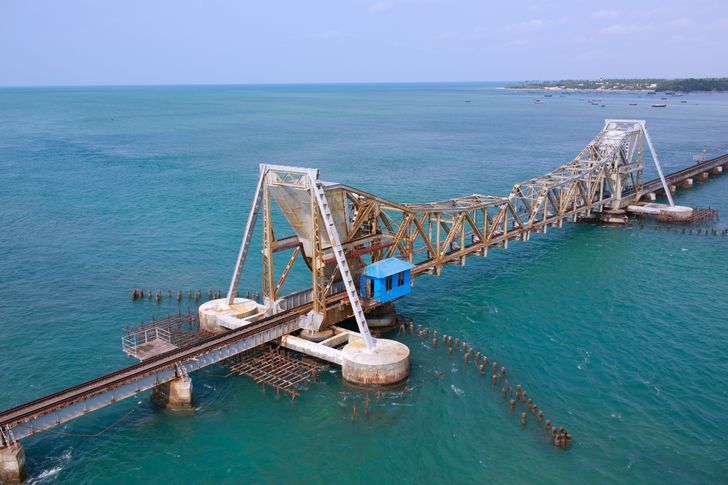 Pamban Bridge connects the mainland part of India with the island of the same name. In 1964, the bridge was destroyed by the strong winds of the Palk Strait. This is why now, when wind speed exceeds 55 km/h, trains receive a special signal warning of the possible danger.

The 666 kilometers long Dalton Highway is the most secluded highway on planet earth. It connects three villages and is often believed to the world’s snowiest highway or the highway that witnesses the highest concentration of snow.

This is a dangerous mountain pass that is nestled 2000 meters in the French Alps, adjacent to the Italian border. The road is characterized by narrow, steep and unpredictable twists and turns that aren’t meant for faint-hearted drivers. French Alps pathways are believed to extremely scenic, and this one doesn’t disappoint on any count.

This narrow, winding road links Ritsa lake and Sochi and passes through the region’s imposing mountains. It is both thrilling and frightening and is worth spotting a minimum of once every week. Russian road that is known for its thrilling inducing steeps and curves smack in the middle of an imposing mountainous region.

Locals built Guoliang Tunnel since earlier a road cutting from the mountain was the primary communication method linking the small village to other places in and around it. Authorities later considered building a 1200 meter long tunnel for helping locals commute between regions more conveniently.

It is known as the “death road” for its fatal demeanor. Kolyma is the road that links Magadan and Yakutsk, and it is considered one of the deadliest in the world for its height and steepness.

The 112-kilometer road stretch connects Hana and Kahului on popular tourist island Maui. This narrow road stretch relates 59 bridges, out of which 46 feature a single lane. The pass is frequently shut owing to landslides in the region.

According to statistics, around 200-300 people lose their lives on this road annually. While there are vertigo-inducing steep mountains on one side, the other side has a 600 meters elevated cliff. It’s frightening to even imagine driving through this path!

Kashmir and Ladakh are linked with this 9-kilometer long stretch, with the path being intently steep and narrow. Brimming with vehicles and livestock, this remains one of India’s most significant passes. Located 3, 528 meters over sea level, the pass is juxtaposed between Kaskmir and Ladakh. Driving through this pass requires nothing short of ace driving skills and a dependable vehicle. With good reason, the pass is shut during winters.

Eshima Ohashi Bridge interlinks Matsue and Sakaiminato, which is 1.7 kilometer in length and about 12 meters in width. The structure almost always seems like it cannot be climbed when viewed from far. Large ships can comfortably pass through it.

Gotthard Pass is one of the loftiest and challenging mountain pass in the Swiss Alps, which makes for such a thrilling drive. The 64-kilometer path snakes from one side to another and rewards visitors with awe-inspiring scenic beauty. The gorgeous looking Switzerland also has some dangerous monsters up her sleeve! The pious looking European wonder has lots of thrilling surprises in store for someone who is willing to give its rugged side an honest chance.

Tianmen Mountain Road, China is a 10-kilometer long stretch that features 99. The variation in the beginning of the stretch and its end is a staggering 1000 meters. So you climb 1000 meters as you drive along the road stretch. Not for the faint-hearted!

The road is nestled bang in the middle of the Carpathian Mountainous region. It elevates to a dramatic height of 2034 meters and is known to be the nation’s highest soaring road. Tansfagarasan is known for its dare-devil appeal and spectacular sight.

The road, according to government authorities is 5062 meters in height, which makes it taller than Mount Elbrus. Khardung is the greatest pass on planet earth according to reputed resources such as National Geographic. It also holds the Guinness Book of World Record for being the world’s tallest pass.

The weirdest thing about this road is that it is open for limited hours each day, and is submerged underwater of the rest of the day. Sounds weird? Well, ensure you carefully read tide schedules before your vehicle sinks in, and you become history or mystery!

Be An Authentic Traveler Diving Into Non-Touristy Places To Discover The Real Culture Of These 15 Countries Previous post
6 Pics Of World's Famous Landmarks From Above Next post
We use cookies to ensure that we give you the best experience on our website. If you continue to use this site we will assume that you are happy with it.OkPrivacy policy