Medieval Italy saw the birth of many important poets and writers and became the cradle of Western art. In 1321, Dante Alighieri delighted the world with his Divine Comedy, which formed the basis of literature in modern Italian.

An artistic revolution began, as artists started to depict matters that weren’t only Biblical. With landscapes, floral designs, and the everyday life of common people becoming focal points for new works, as well as many medieval masterpieces still portraying biblical scenes.

Most people lived in small wooden houses with no healthcare, 10 people in the same room, doing the same thing every day: farming. Except for a very limited number of people that had political privileges, like kings, dukes, etc, all the rest of the population could die v easily from the flu. From the 1200s on, things started getting better for a number of people due to the rise of trade. And, the North of Italy was starting commercial traffics with other Mediterranean powers.

Not to be outdone by one another, the different towns began constructing massive buildings out of civic pride. This meant that the Middle ages saw a boom of art and architectural commissions. which now gives us all the more architecture to explore.

From sleepy Sicilian seaside escapes to postcard-perfect Tuscan hamlets, we’ve rounded up the 7 most beautiful small towns in Italy. 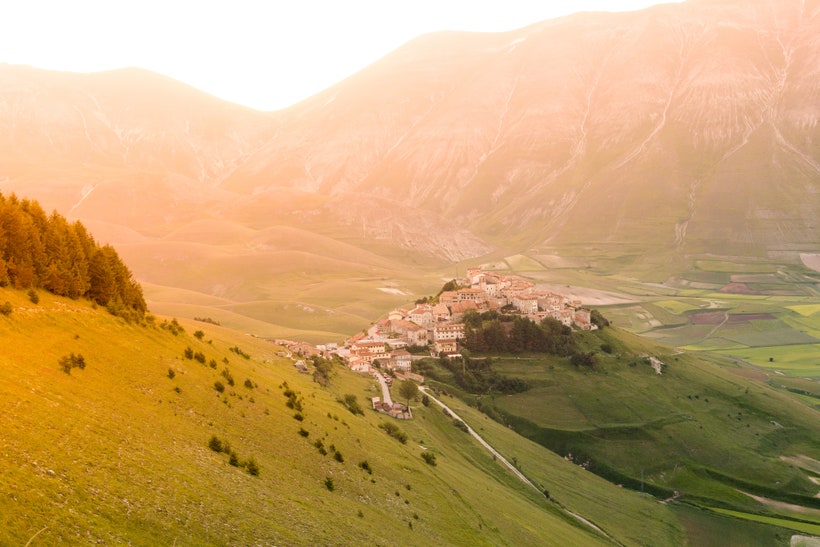 Located atop a steep hill 5,000 feet above sea level, Castellucio is the highest—and most beautiful—a village in the Apennine Mountain Range. The village is backed by snow-capped mountains on one side and on the other, lush, fertile plains that blossom with red poppies, violets, and rapeseed in the spring. Sadly, a 2016 earthquake rendered the village virtually uninhabitable, but some remaining residents have re-opened shops and restaurants that are currently open to visitors. 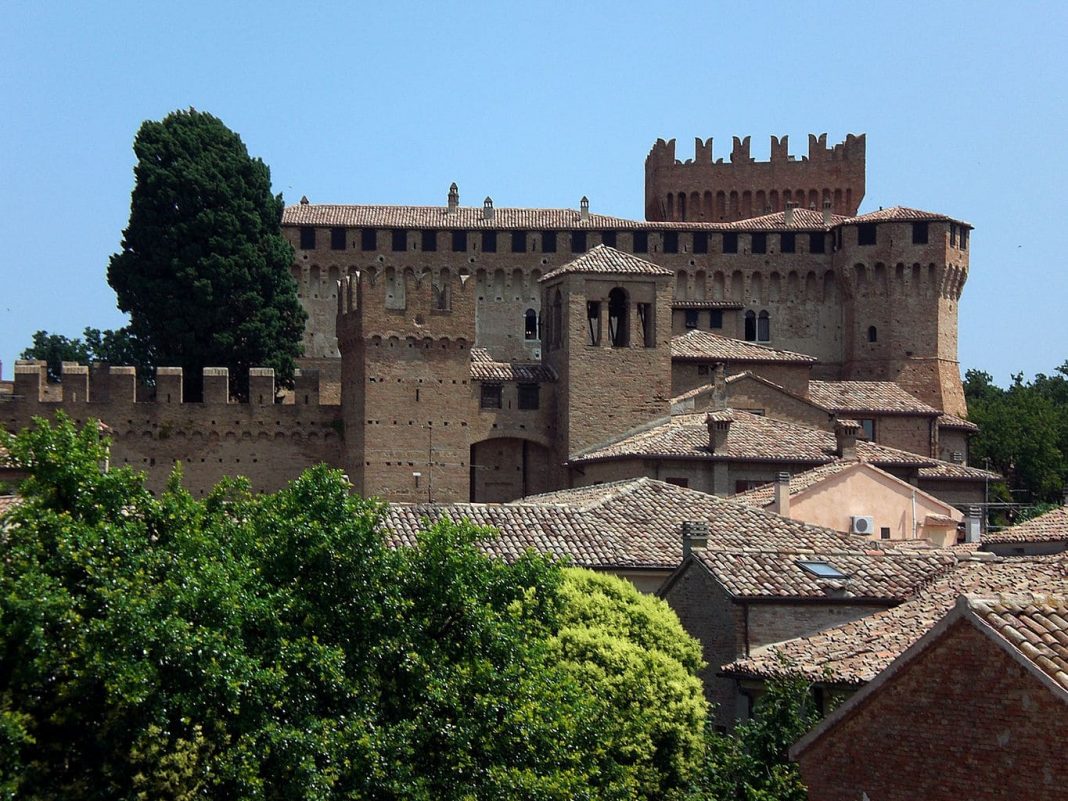 You may think that beauty is in the eye of the beholder. However, some places are just objectively beautiful no matter who visits them. Such is the case in the Italian region of Le Marche, and this makes it quite difficult to rank Le Marche villages based on their beauty.

The elegance and beauty of the region as a whole are magnificent. Le Marche is the perfect spot for a more relaxed Italian holiday. Surrounded by Umbria, Emilia Romagna, Abruzzo, and the famous Tuscany, it’s a central region that many seem to forget about or simply not know.

With access to the Adriatic Sea, rolling hills and mountainous inland landscapes, Le Marche is the perfect vacation spot. The towns and villages of this region are a fantastic and less crowded option with so much to offer. 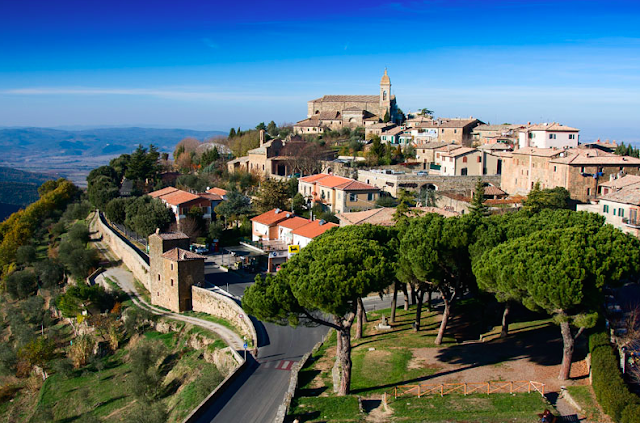 Montalcino puts the M in medieval. It’s walls are high and mighty, and built in 1361 to mark the passage of Montalcino under the domination of Siena. With medieval towns and delicious local wine being the winning combination, we must talk about their renowned wine Brunello di Montalcino.

A red produced exclusively in Montalcino and one of Italy’s most famous wines. According to DOCG regulations, Brunello wines cannot be commercialized before five years, since production, (6 years for the Riserva wine). During this long period, the wine must remain for at least two years in wooden barrels and undergo a minimum of four months of refinement when bottled. Montalcino is in between the Val d’Orcia Natural Park and the Maremma part of Tuscany, which is about the best of both worlds as it gets. 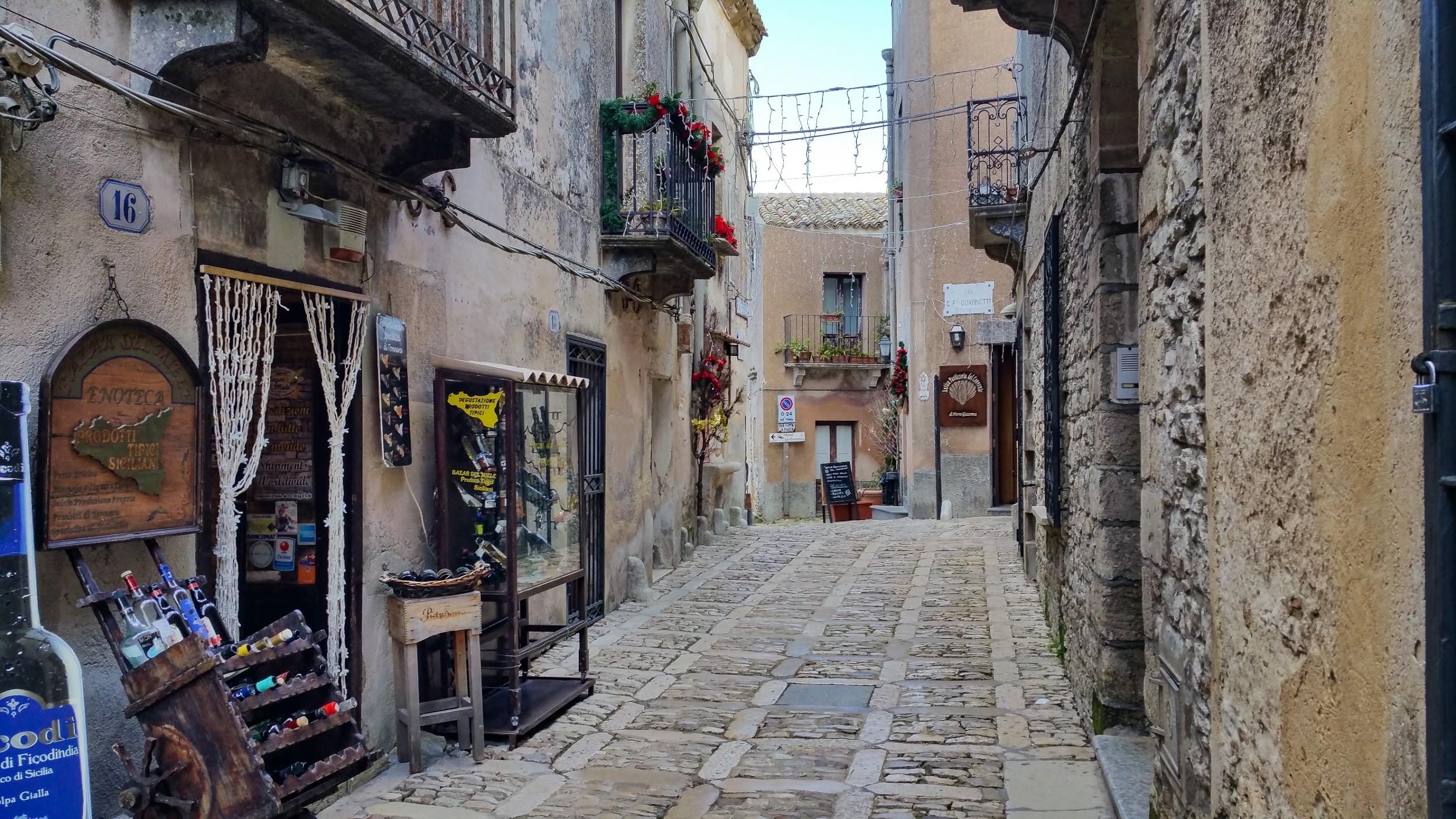 This history-rich town is also known as the city of a hundred towers.

Erice is a small medieval town located on the top of the mountain of the same name some 750 meters above sea level in the Province of Trapani in eastern Sicily. It was founded by exiles from Troy who discovered the perfect location in which to live until the Roman conquest in 244 B.C. and it is likely that the town was named “Venere Ericina” during this period after the mythical Roman goddess.

Since 1963 the Ettore Majorana Scientific and Cultural Centre has been located in the town, an initiative of Professor Antonino Zichini which attracts the ablest academics from around the world for the scientific study of problems relating to a range of different fields: from medicine to law, from history to astronomy and from philology to chemistry. For this reason, the town is dubbed the “City of Science”.

Access to the town can be gained via the winding state road or via the cable railway which takes 10 minutes from the valley below to the center of the town. Erice is an unmissable destination in Sicily: its narrow cobbled streets, its houses clinging to the rocks, its towers, its churches, and its castles which will conquer your hearts and minds and inspire you to dream. Erice has remained almost as it was in medieval times with the exception of some excellent restaurants and cake shops which can be found in the center of the town! 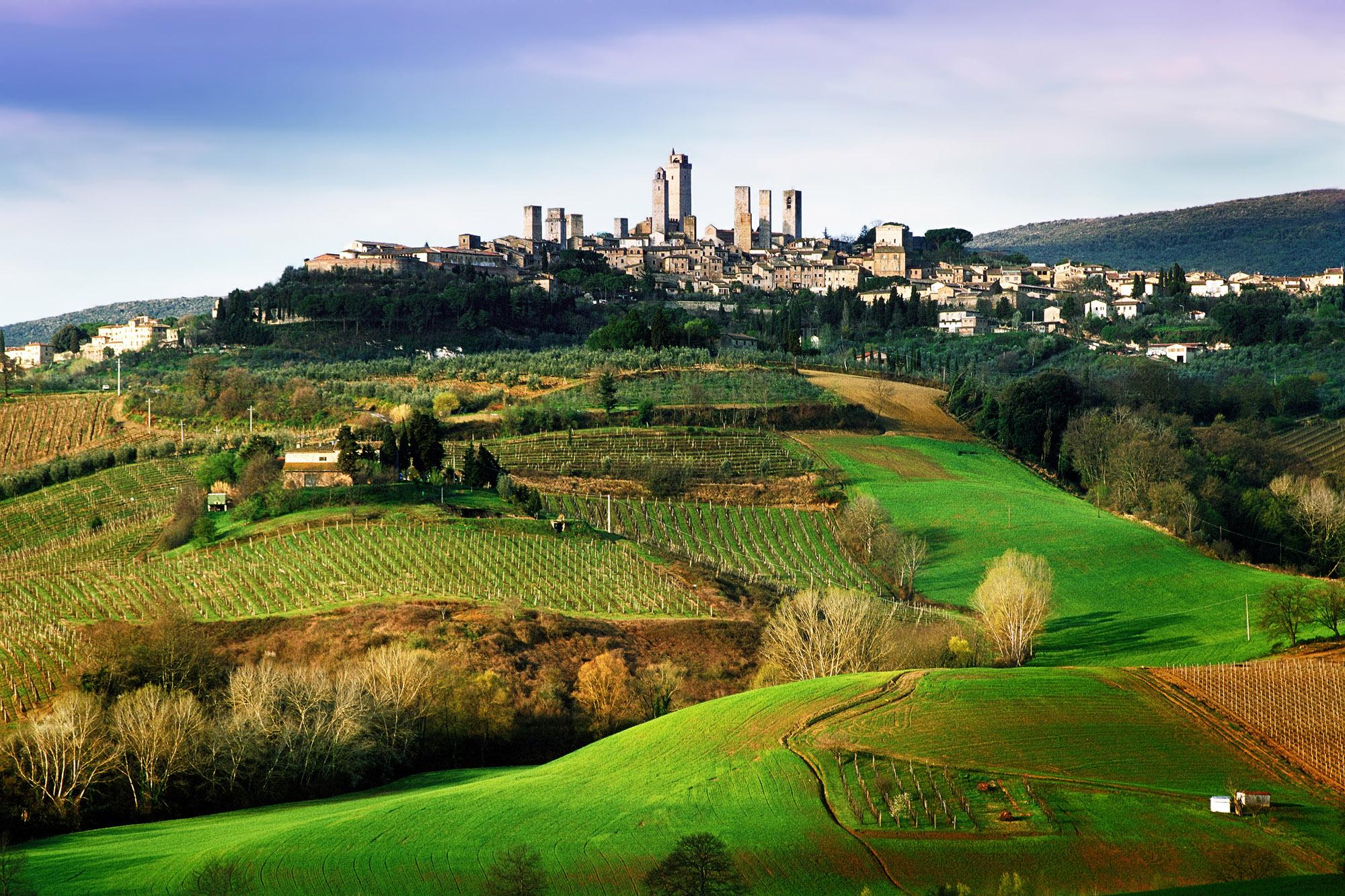 San Gimignano has retained its appearance from medieval times with its architectural integrity and intact urban layout. – © Andrea Migliorini

Discover rolling hills covered with rows of grapevines, terra cotta roofs, and fortified towers from the 11th and 13th centuries in San Gimignano, located in Tuscany, Italy. After being an important resting point for pilgrims during the Middle Ages, it is today a magical spot to relax with the rhythm of this glorious landscape and be inspired by an evolving lifestyle that’s a millennium in the making.

Visitors are universally spellbound when they discover San Gimignano. The reason for this lays in the well-preserved feudal atmosphere and appearance from the Middle Ages with its architectural integrity and original intact urban layout. The towers capture the way wealth and power were displayed through dramatic public and private monuments.

San Gimignano is a must-do. This special hilltop town has a labyrinth of winding alleys and rich cultural history. There’s nowhere like it in the world and is known as the medieval Manhattan, because of it’s multitude of medieval towers.

After visiting the Duomo and Palazzo Della Podesta, walk up to the top of the ancient walls for the best view of Chianti. Grab a table at the Enoteca di Vinorum, for a glass of wine overlooking the Tuscan landscape, after climbing the tallest tower, the Torre Grossa. 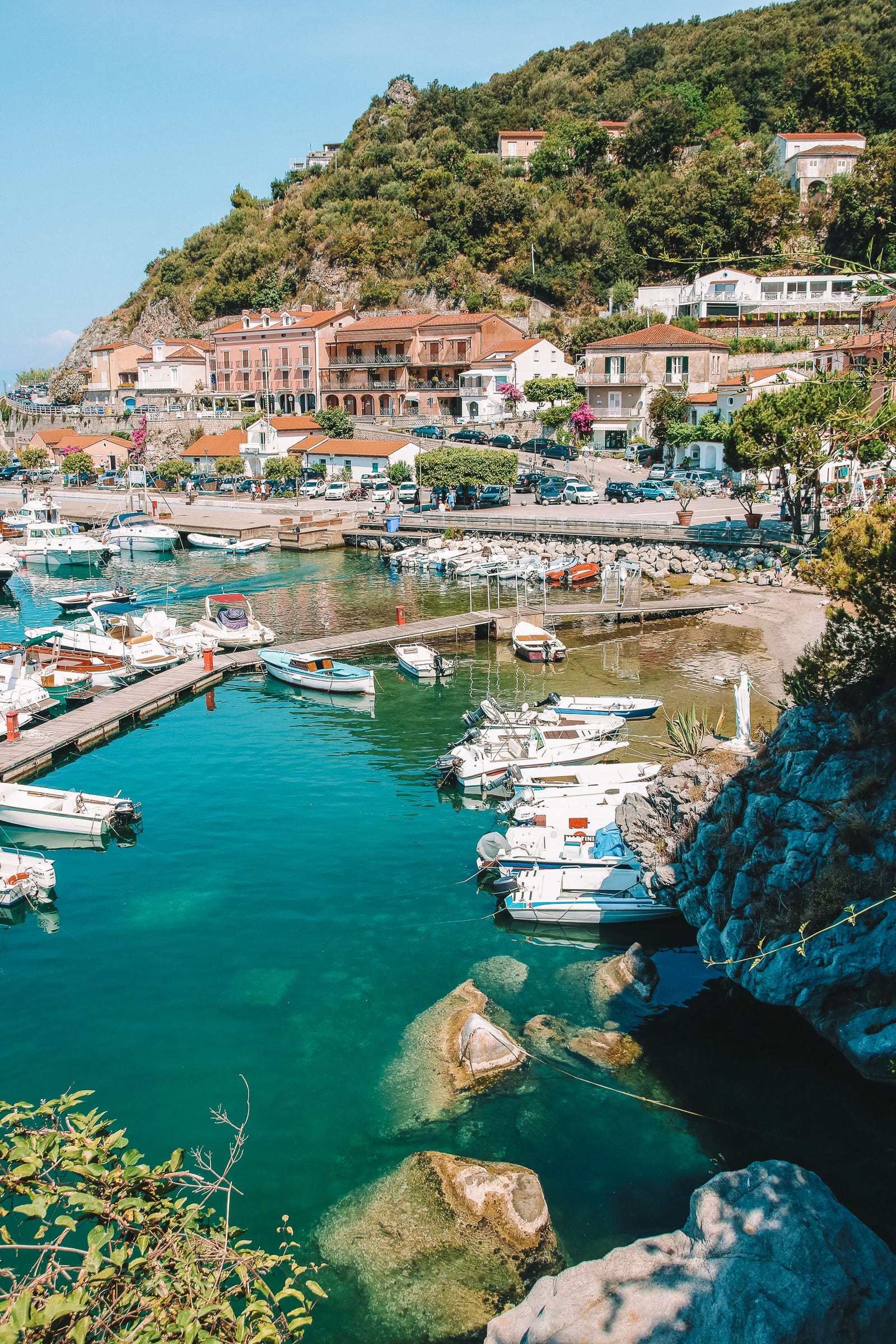 Maratea is positioned along the rocky coastline of the Mediterranean Sea and this medieval town with its ritzy harbor is one of the top spots in Italy. If you want to stay here during the summer you may have to book well in advance to secure your chosen hotel as rooms book up FAST.

For a sumptuous stay, pop over to the Santavenere Hotel that even has its very own beach. It’s a great spot for cocktails and enjoying the lovely coast. 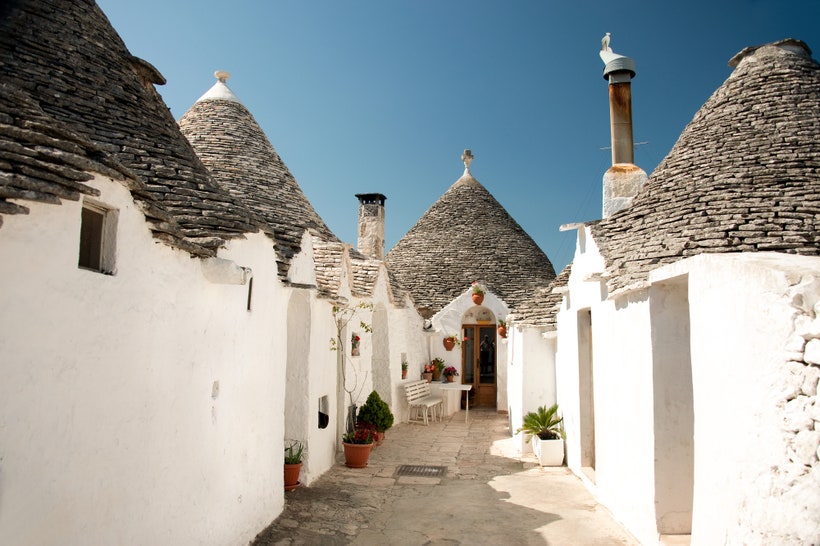 The main draw of Alberobello, a small town near Bari in Puglia, is its characteristic Trulli: cone-shaped, white-tipped houses that look as if they’ve been perpetually dusted by snow. Thanks to this distinctive feature, the town was deemed so unique that it was made a UNESCO World Heritage Site in 1996. Pro tip: Head up to Piazza del Popolo, where the Belvedere Trulli lookout offers spectacular views of the entire town.

The Most Beautiful Places in the World (Part 2) Previous post
'An Extremely Rare Phenomenon': A Yellow Cardinal, Nicknamed 'Sunny,' Photographed In Florida Next post