Unless You’re A Brave Tourist, These 17 Places Aren’t For You

When choosing a travel destination, the most important thing to consider is the beauty of the place, the sights, and the food. But there are those who see every trip as an opportunity for adrenaline dangerous adventure. In extreme tourism, travelers go to the most dangerous areas around the world and try out the most death-defying stunts, all for the thrill of it. But not everyone is as brave!

There are so many adventurers who do that an entire sub-category of traveling has developed: extreme tourism. Also known as “shock tourism,” travelers go to the most dangerous areas around the world and try out the most death-defying stunts, all for the thrill of it.

Do you love getting an adrenaline rush? Check the list below and decide for yourself. 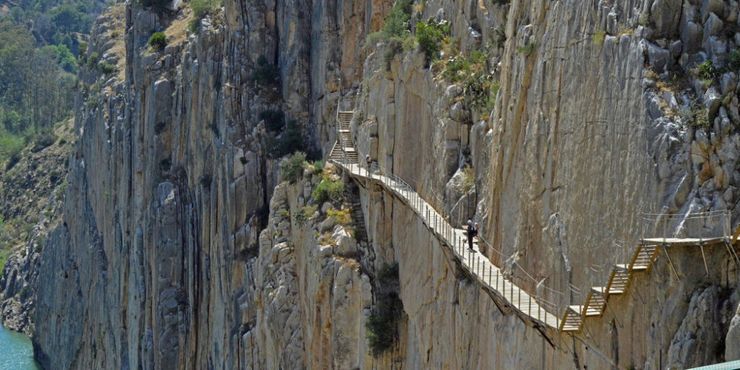 Known in English as “The King’s Little Path,” this walkway goes across a super narrow canyon that extreme tourists love to try. Although the walkway was originally created in 1905 as a way for workers to travel between two hydroelectric power plants, it has since become best known as a tourist attraction, especially for the tourists who like taking risks.

After all, El Caminito Del Rey once held the title as “The World’s Most Dangerous Walkway” after five people died within the years 1999 and 2000. It was closed down for a bit following the controversy but was re-opened to the public in 2015. 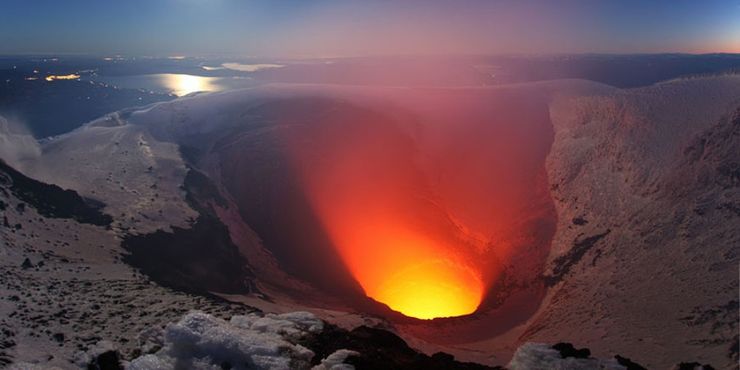 Tourists who travel to Pucon, Chile have the opportunity to bungee jump into an active volcano. This option comes as a part of an extreme tourist package that also includes waterfall bungee jumping, whitewater rafting, and skydiving as part of the itinerary.

Hurtling head-first towards a giant pit of bubbling, flaming lava doesn’t sound too much fun to us, but to each their own! And hey, if you survive it, you have an unbelievable story to tell at parties. 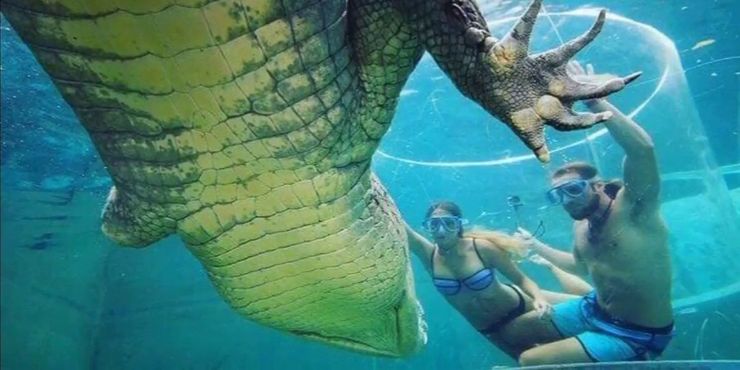 Of course it’s Australia who is offering tourists the opportunity to enter something called the “Cage of Death“! The Cage of Death is a clear box that’s made of merely 4 centimeters of acrylic. You enter it and are lowered into the water, where you’ll get to see the most aggressive of crocodiles—and there are no bars like there are on the cages for when you go shark diving! 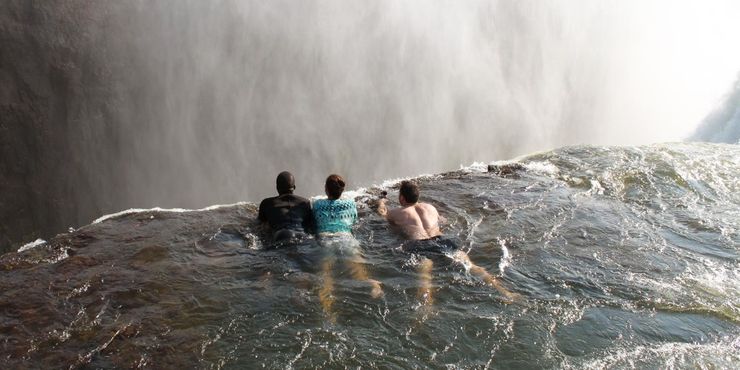 The Devil’s Pool gives you a beautiful view, but at what cost? Thousands of years of erosion have led to various rock pools at the top Victoria Falls. One of these rock pools happens to be at the very edge of the waterfall, almost hanging downward.

So naturally, many people have tried to hang onto those rocks and looks over. With heavy enough water and a slip of the finger, you could plunge over the waterfall and die. Even so, there are guides who will accompany you to the Devil’s Pool if you still wish to give it a try. 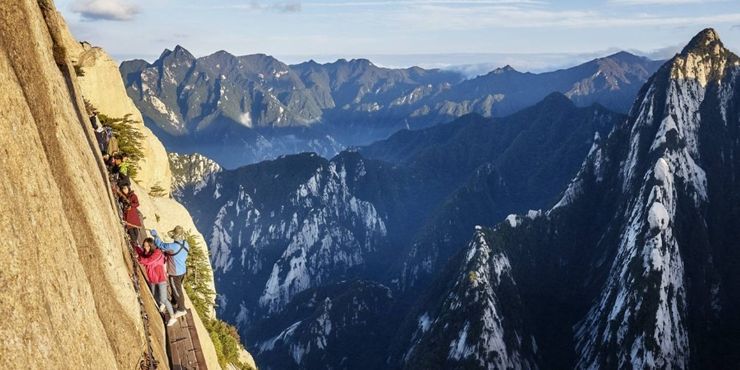 Climbing up this mountain has been regarded as one of the most dangerous hikes in the world, so of course, that’s the perfect bait for extreme tourists. Many opt to go on the “Plank Trail,” which is rumored to cause 100 deaths per year.

The “Plank Road” bridge sees hikers climbing to the next peak by walking across a 0.3 meter (0.98 ft.) wide plank path that’s built along the side of a vertical cliff. Even when using a different path and not opting to use the ridiculously risky plank, many still lose their footing anyway and fall to their deaths.

The Road of Death, or North Yungas Road, is not the place to take a peaceful bike ride. While more safety precautions have been put in place nowadays, it was once—and sometimes still is—known as the most dangerous road in the world. 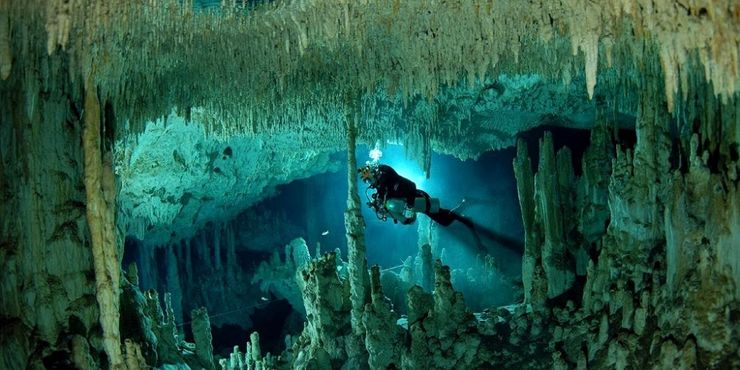 Setting the record as the longest underwater cave ever discovered on Earth, it goes as far as 350 kilometers in, has an average depth of 21 meters, and has a maximum depth of 120 meters.

Oh, and there have been hundreds of roof collapse situations over time. Sounds like the perfect place for a tour, right? The various roof collapses have resulted in hundreds of cenotes, which aren’t as dangerous to explore, but others opt to go deeper—without a professional. 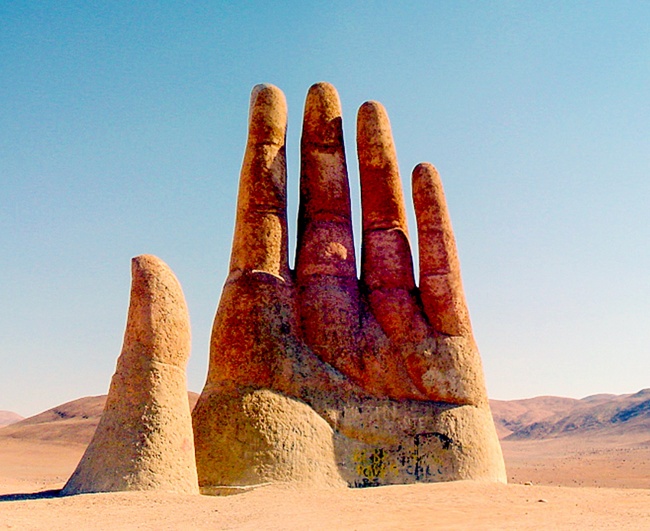 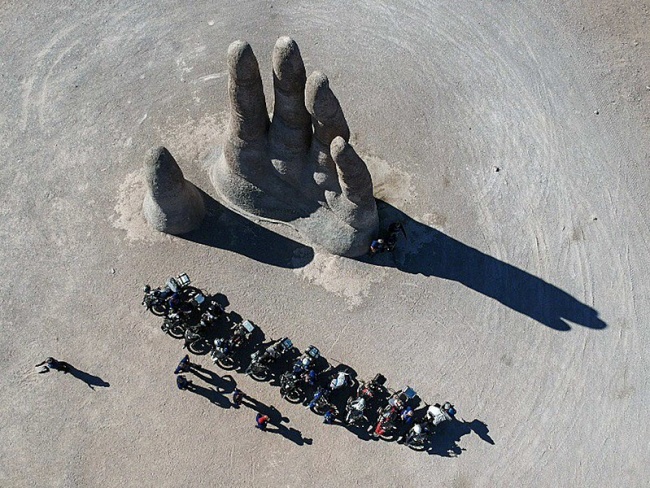 This unusual sculpture is located in the Atacama Desert in Chile. It is a human hand, 1/4 of which is underground. Mano del Desierto is a very popular place for very different kinds of filmings: commercials and music videos. It is often painted with graffiti, so the government has to send workers to clean it. The sculpture was constructed by the Chilean sculptor Mario Irarrázabal. It is built of concrete with a base of the iron. According to the author, it is supposed to express human injustice, loneliness, and suffering, and the impressive size expresses vulnerability and helplessness. Mano del Desierto was inaugurated on March 28, 1992.

9# Shipwreck in the Solomon Islands 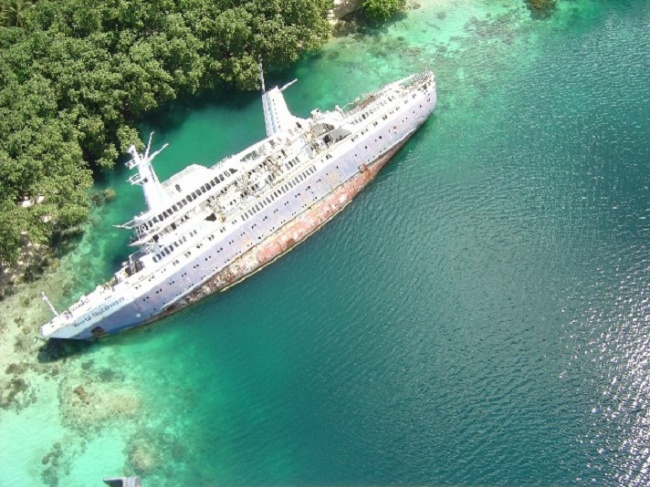 This place is uncharted territory for ships because there are a lot of underwater coral formations. In 2000, the Liberian cruise ship World Discoverer got stuck near the Solomon Islands in the Pacific Ocean. None of the passengers were hurt, but there was no way to rescue the ship itself, so it became a home for fish and other sea creatures. 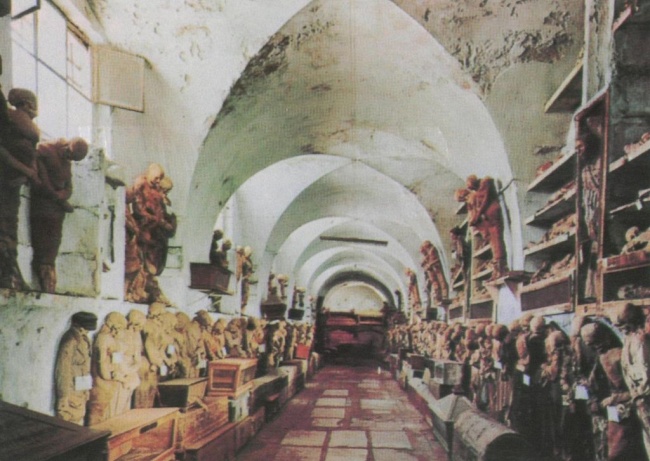 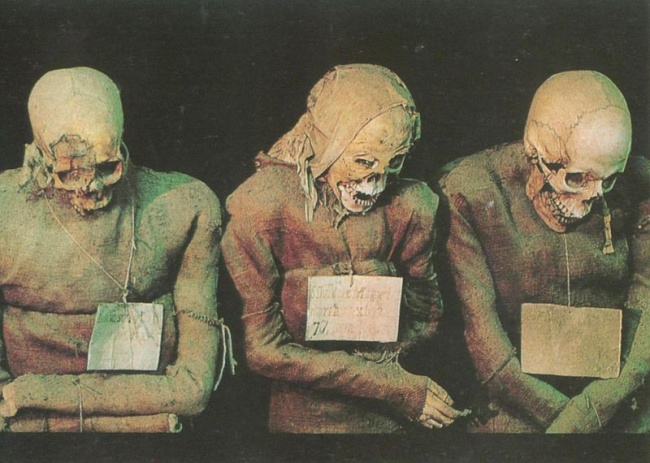 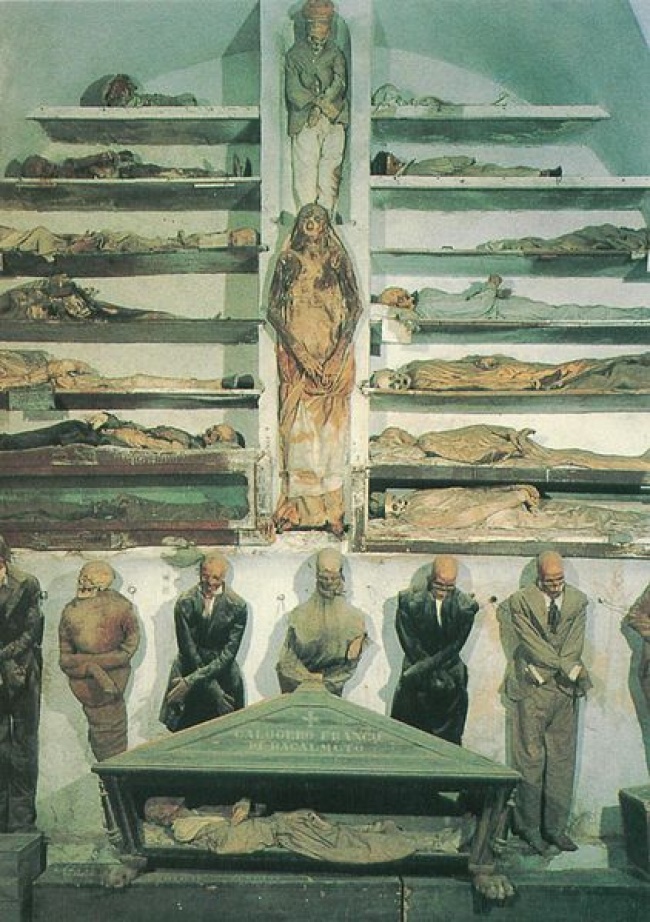 In Palermo, Italy, there are catacombs where more than 8,000 people were buried. This place is one of the most famous mummy exhibitions. The catacombs were built at the end of the 16th century when the number of the Capucci monastery attendants increased and they needed a bigger burial site. In the 18th-19th centuries, this place became a luxury place for the burial of clergy and bourgeois families. The catacombs were officially closed only in 1882. Since then, no one has been buried there.

12# The running of the bulls (Spanish national tradition) 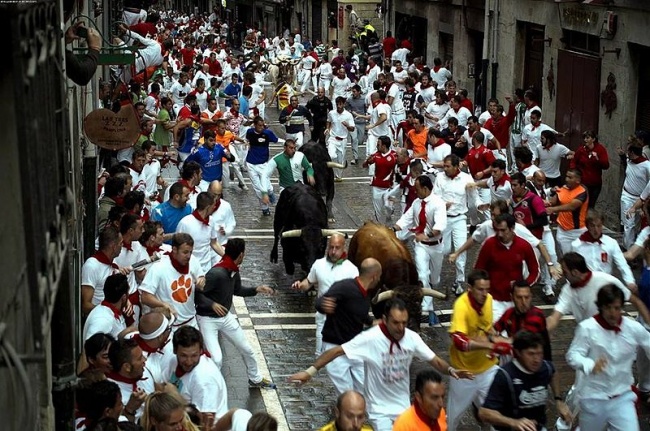 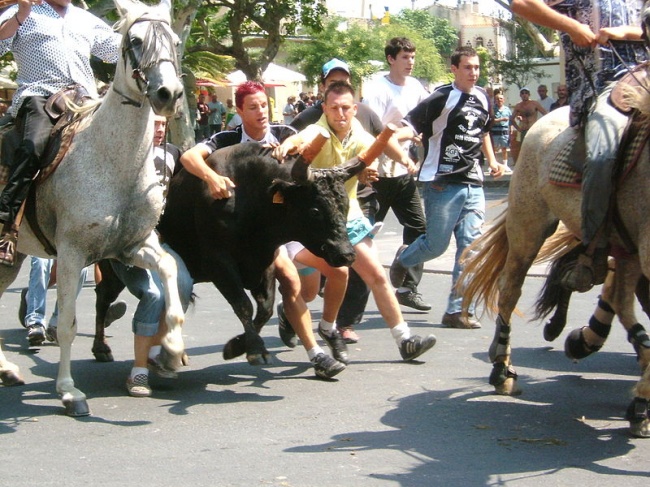 The encierro is a tradition where you have to run away from bulls that have been let free on purpose. This is still a popular form of entertainment in many villages in Spain. The most popular encierro is held in Pamplona during the festival of San Fermín. The route is around 0.6 miles, and everyone is welcome to participate — even tourists. The encierro starts after the explosion of a firecracker, and then the bulls are let free, and the participants run away from them. There are no conditions that you have to run the entire distance. So if you feel that you are in danger, you can hide somewhere. 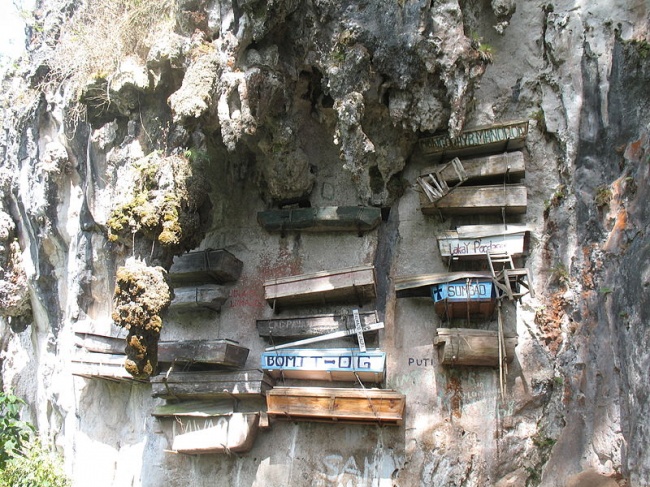 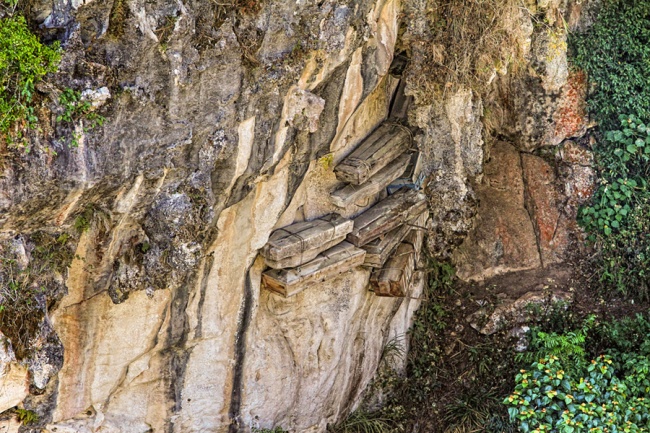 Sagada is very attractive to tourists because this area was once a part of the ocean. Now there are a lot of caves that many foreigners to the Philippines want to visit. In addition to the caves, there are many rocks in Sagada, and on one of them, you can see hanging coffins. Burial in hanging coffins is a very old tradition, and coffins were carved from solid pieces of wood. After the deceased had been placed inside, the coffin was put on very high cliffs (up to 380 feet) or in caves. According to the legend, the mountains were a ladder between Earth and heaven. 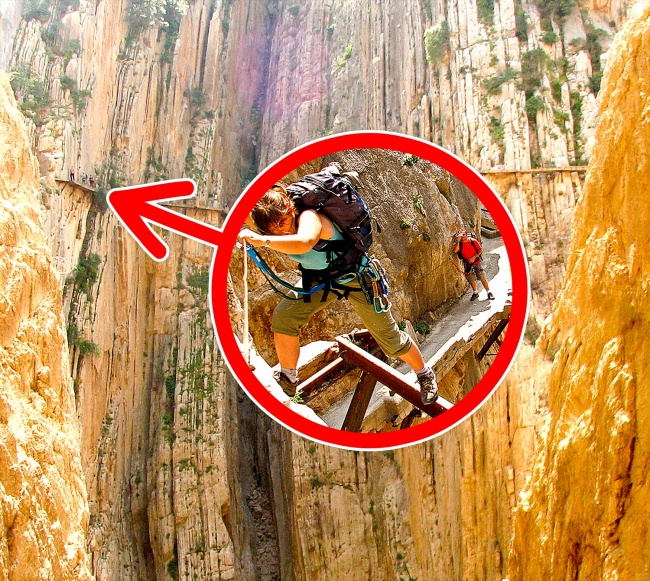 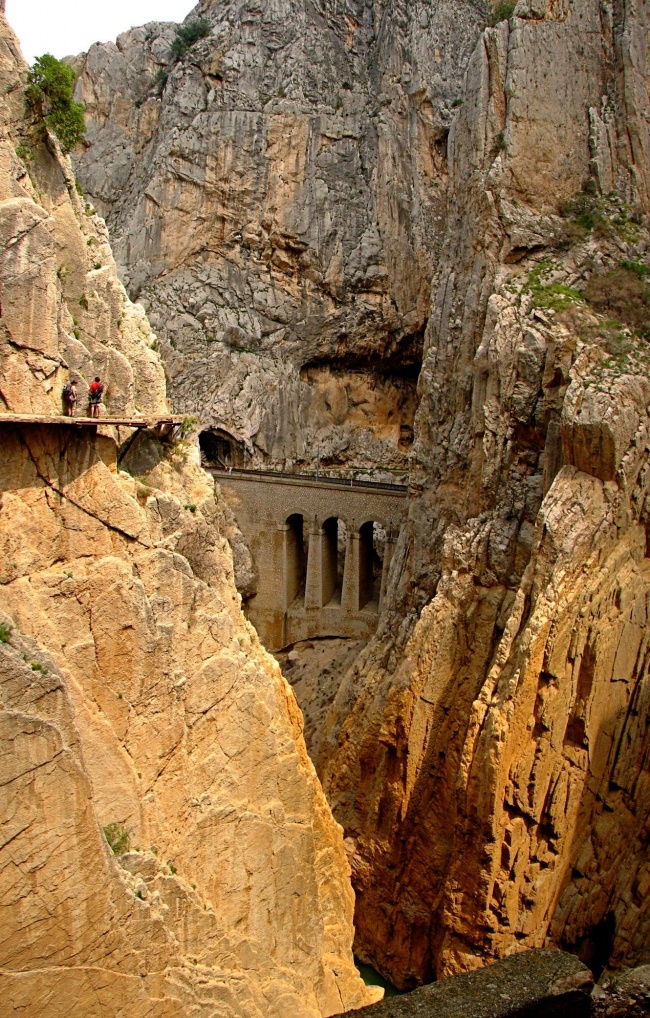 El Caminito del Rey is Spanish for “The King’s Little Pathway.” It is concrete construction with steel rails in the rock. The path is located between the Chorro and Gaitanejo waterfalls in Malaga, Spain, and it is very high above the ground. The path is 1.8 miles long and just 3.2 feet wide.

It was built in 1905 as an auxiliary path for workers who were building the dam. The path was used to get from one side of the canyon to the other. The “King” name was given to the path after Alfonso XIII, the king of Spain, walked on it in the opening ceremony. 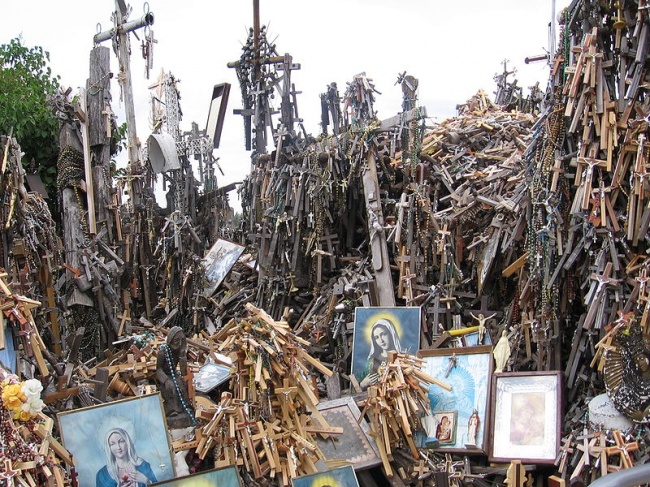 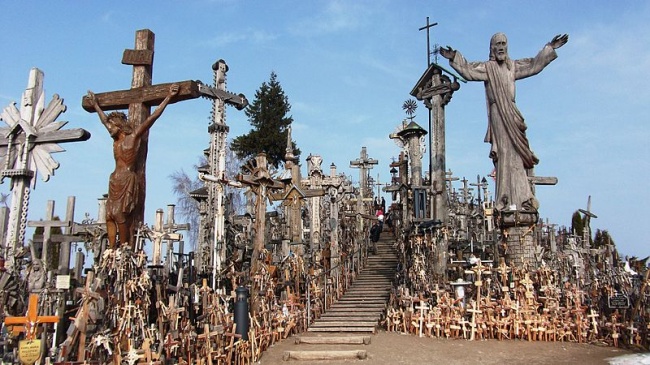 The Hill of Crosses is a holy site in Lithuania, and it is a hill with a huge number of crosses on it. The exact number of crosses is unknown, but, according to some calculations in the ’90s, there were about 50,000. The site is not a cemetery, but more and more crosses appear there because people believe that if you leave a cross on the hill, you will be lucky. There is no accurate information about the time and the reasons for why the Hill was made in the first place. 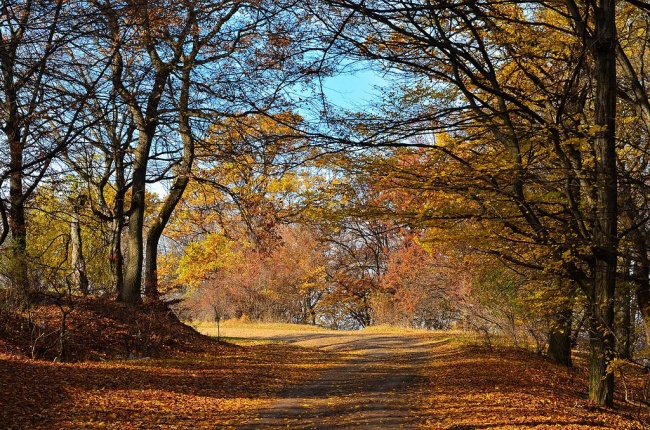 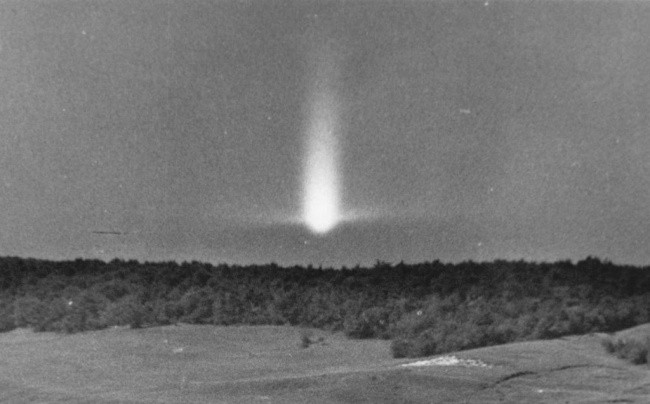 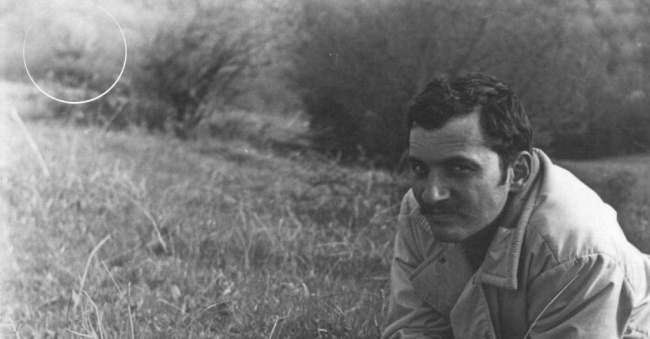 Hoia Forest is situated in Transylvania and is famous for various stories about paranormal events. According to the legend, the forest is named after a shepherd who once entered the forest with animals and disappeared with them in a thick fog. No signs of an assault were found. Many researchers claim that they experienced fear, they panicked, and they heard different voices while they were in the forest — all for unexplained reasons. Some of them are convinced they saw a UFO there; others are sure they met ghosts. It’s hard to believe any of this, even though there are photos that supposedly captured these events. 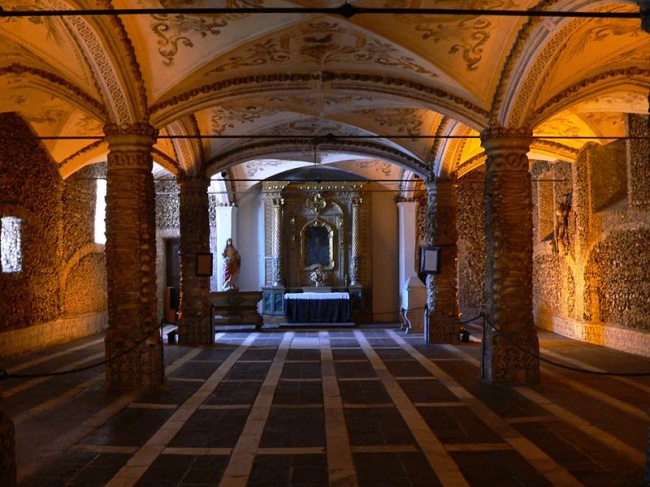 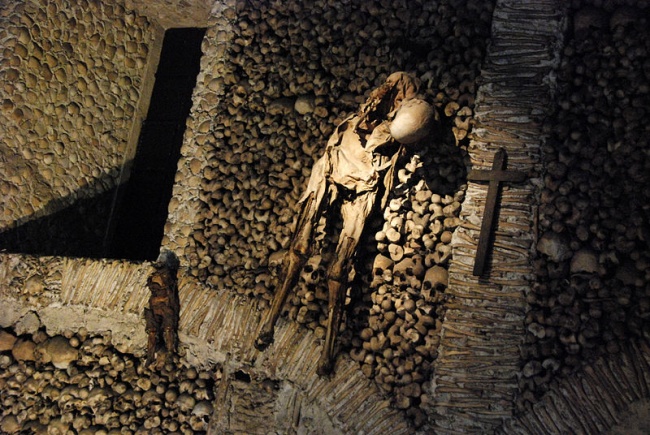 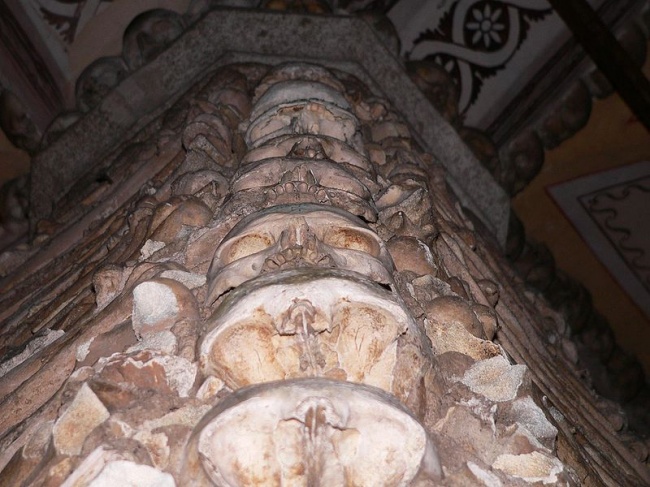 This chapel is located in Évora, Portugal, and it is one of the most famous monuments of the city. The chapel gets its name from the interior walls that are covered and decorated with human skulls and bones. The Chapel of Bones was built in the 16th century by a Franciscan monk who wanted to tell his brothers that life is short. This is why the walls are covered with bones. At the entrance of the chapel, there is a sign: Nós ossos que aqui estamos pelos vossos esperamos. This can be translated as We bones that here are, for yours await.