To its devotees, Reddit feels proudly untamed, one of the last Internet giants to resist homogeneity. Most Reddit pages have a throwback aesthetic, with a few crudely designed graphics and a tangle of text: an original post, comments on the post, responses to the comments, responses to the responses. That’s pretty much it. Reddit is made up of more than a million individual communities, or subreddits, some of which have three subscribers, some twenty million.

If you want to stay updated with the latest trends and what the internet is talking about, then Reddit is the place to be. It’s a site where the registered community members submit text posts, images, and direct links to funny and interesting content.

To bring back our long-lost excitement for hard pieces of data, aka maps, plans, and geographic drawings, we’re gonna need to start from the very best of them. For that matter, there’s a whole online community on Reddit dedicated to the most unusual charts of geographic areas that took maps to a whole new level.

From mapping “October” in European languages to mapping an eagle’s track over a period of twenty years, these incredible examples will surely put the world into a completely new perspective.

#1 To Increase Local Tourism, Lithuania Has Made A Map With Magnets That You Can Only Find In Corresponding Cities 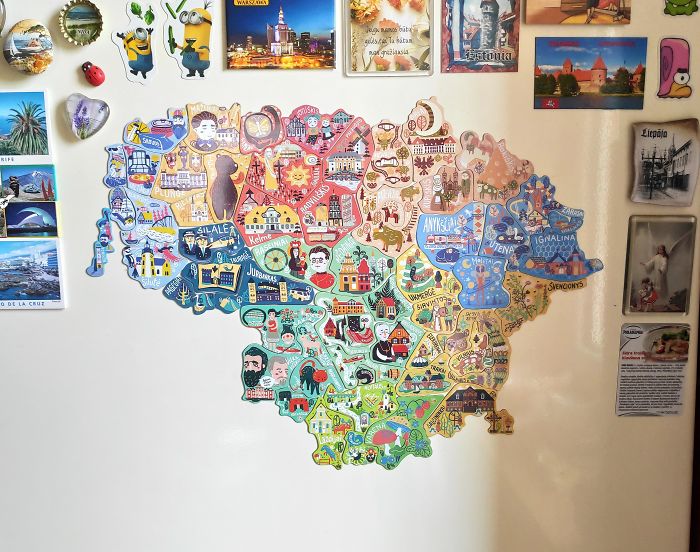 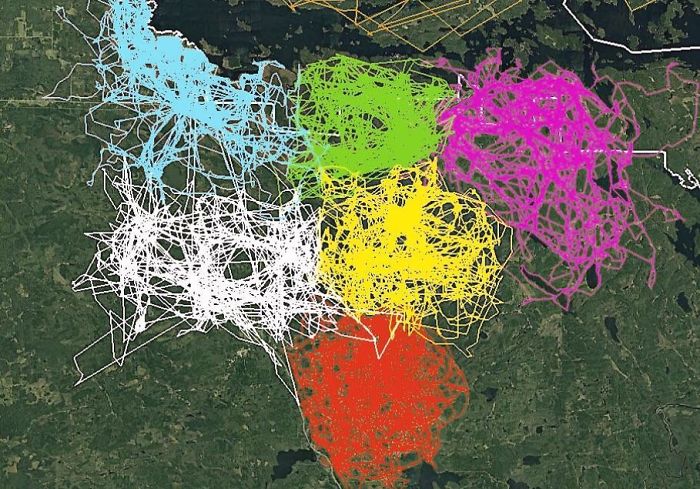 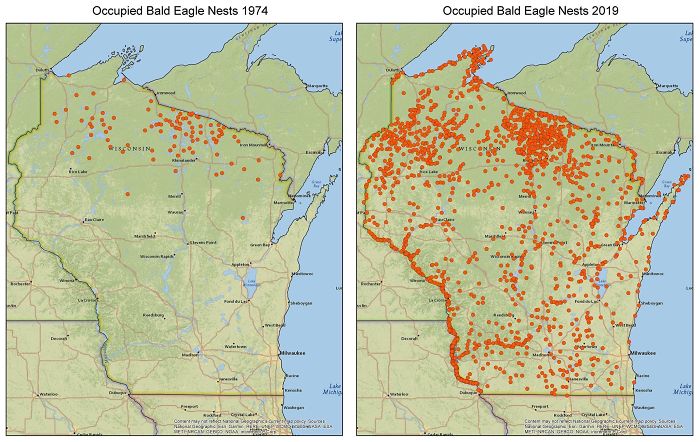 In an interview for Bored Panda, the creator of the Reddit community r/MapP**n, Patrick McGranaghan, said, “I wanted people to share those maps so that they are easy to find and discuss.”

It turns out, he works as a land surveyor in Colorado and is a devoted member of several map societies across the nation, including the North American Cartographic Information Society, Charles Close Society for the Study of Ordnance Survey Maps, and Rocky Mountain Map Society, to name just a few.

#4 Tracking Of An Eagle Over A 20 Year Period 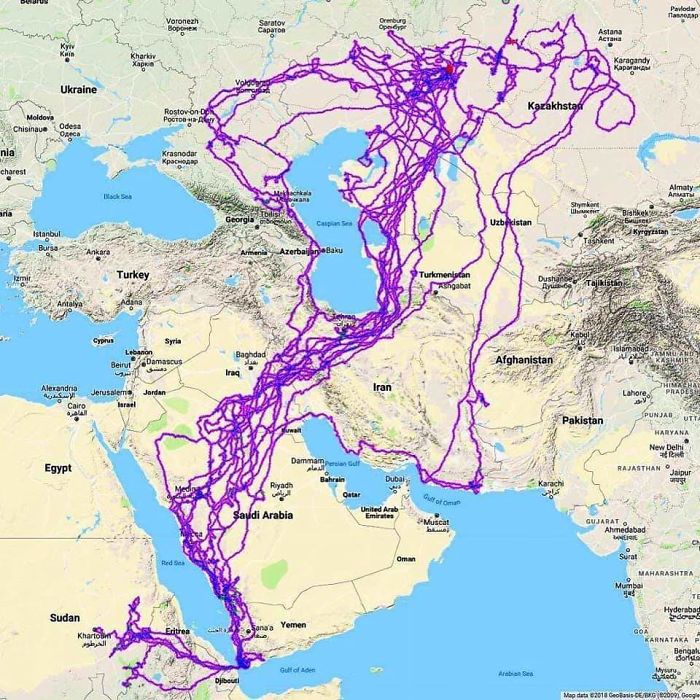 #5 When A Band Announces A World Tour 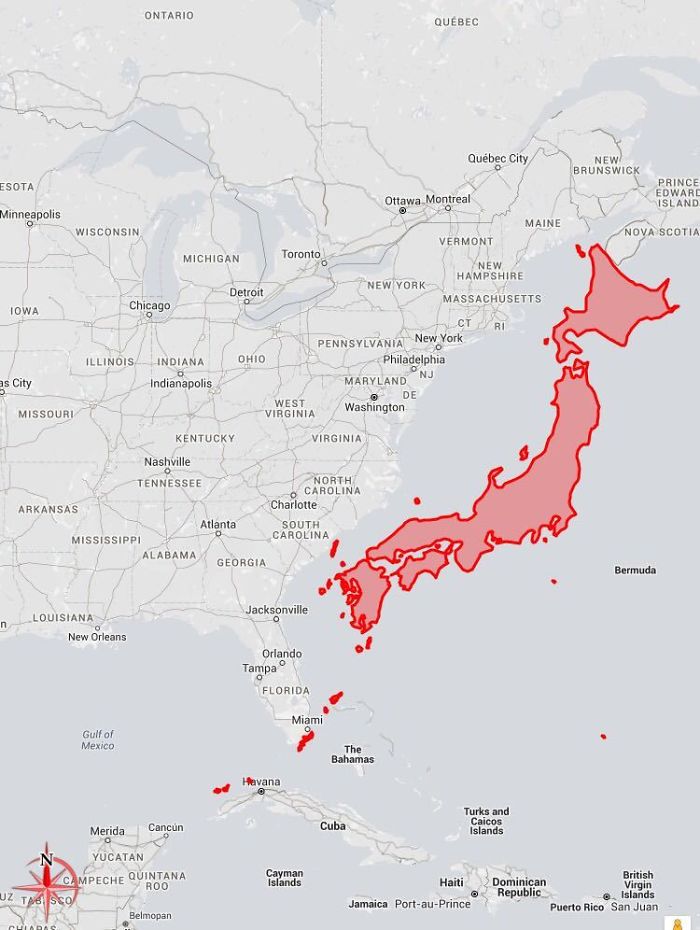 “In the years since the culture on the internet has taken a much more puritan bias and some people don’t like that name,” Patrick said.

However, he assured us that “the goal of the brand has not changed, though: it’s a place to share and discuss beautiful maps.” 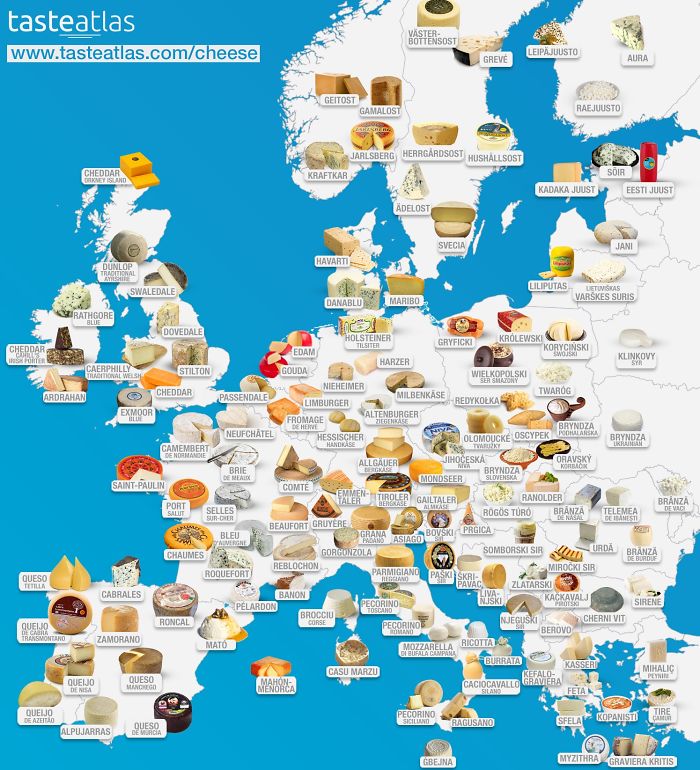 #8 The Earth Being Centered On Great Britain Is Arbitrary, So Here’s A Map Centered On New Zealand 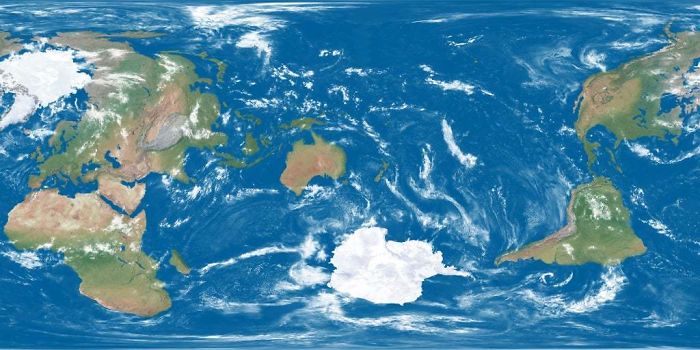 #9 List Of Countries Mentioned Or Referred In The Bible 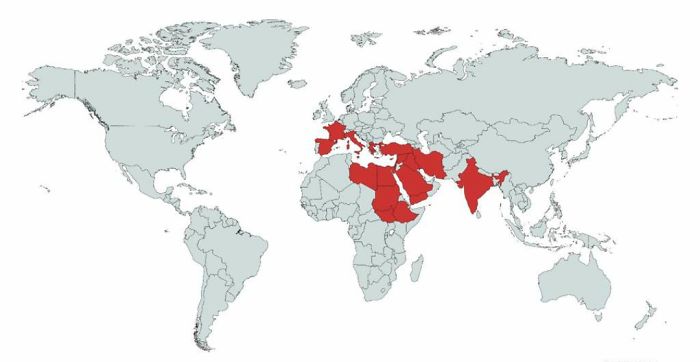 When it comes to submissions, they come in every form and style. “From historical maps showing ancient borders, to funny memes and transit maps. People also post imaginary maps of places that they create in their minds.”

In fact, every kind of map imaginable has been posted to this subreddit. Patrick said that linguistic maps are popular, as well as maps that re-imagine state and national borders. There are also maps of asteroids and maps of routes of famous explorers.

“One of my favorite interactions is when a map is posted of an obscure place and someone in the comments says they live there or has a story about that place.”

#10 50 Percent Of Canadians Live South Of The Red Line 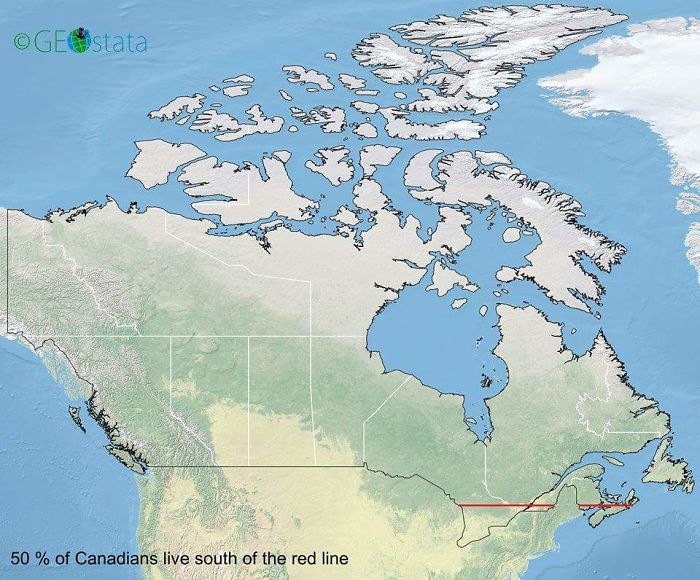 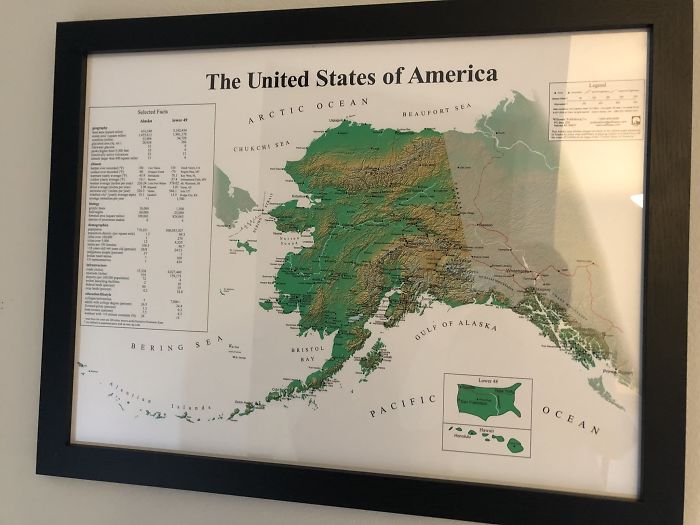 #12 Each Section Has 10% Of The World’s Population 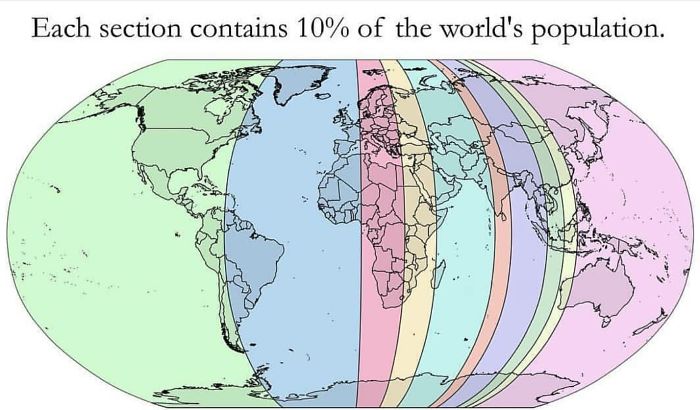 Patrick concluded that “Maps are a way to visualize the world in a way that is easy to grasp. They are an aid in learning about new lands and faraway places. They help us find our way when we are lost.”

Especially in a time like now, “when the pandemic prevents us from traveling, maps are a way that we can travel without leaving our home,” the map enthusiast said.

#13 The Longest Possible Train Travel In The World 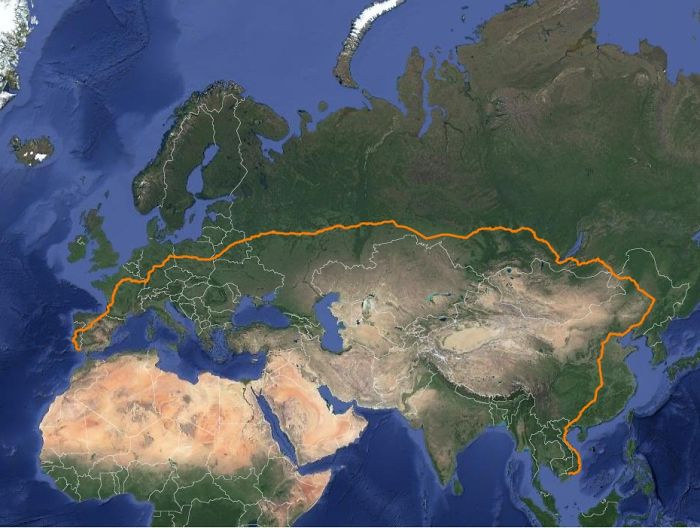 #14 Where Penguins Are Found Naturally In The World 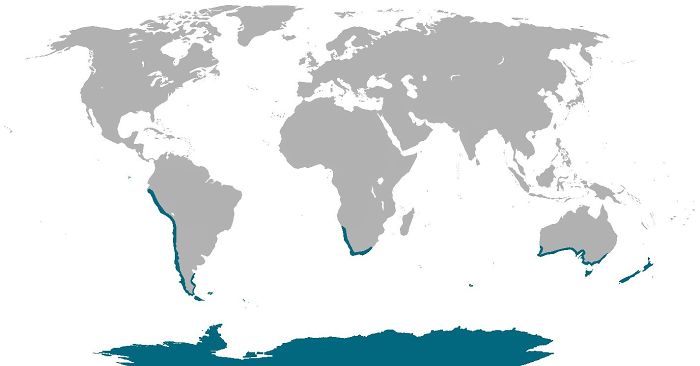 #15 Size Comparison Between Australia And The United States 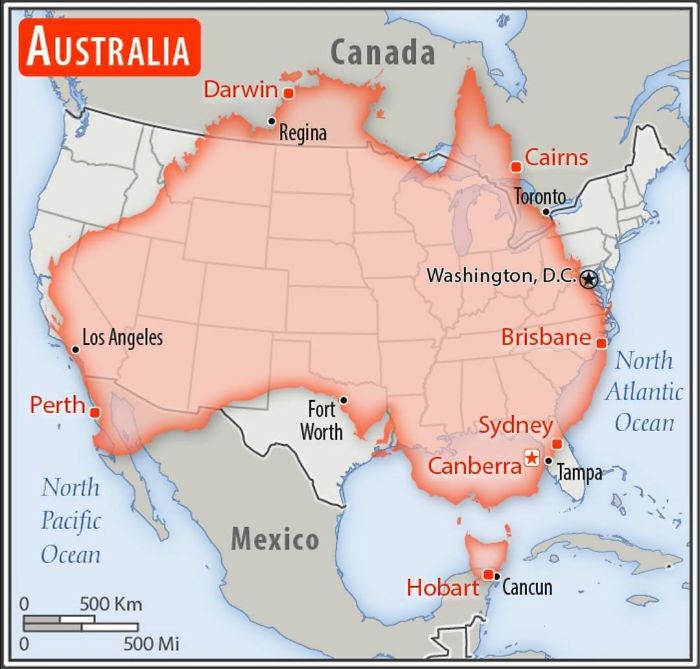 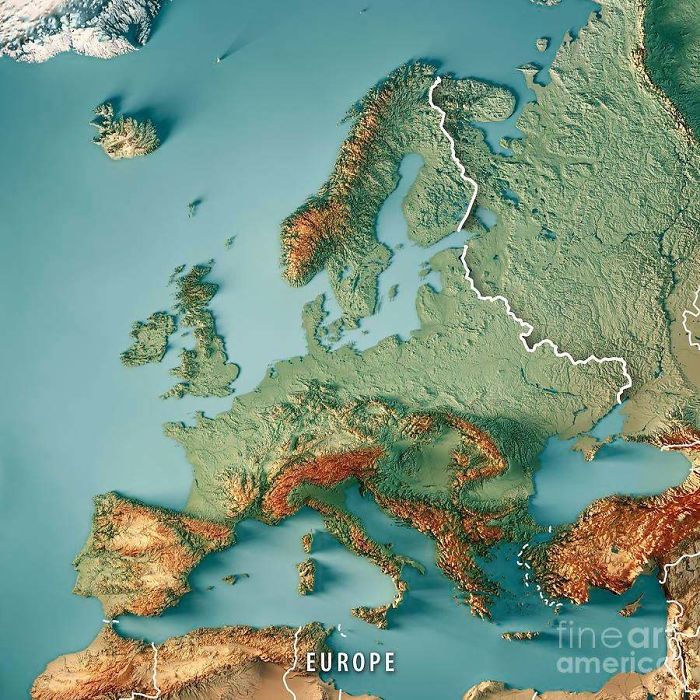 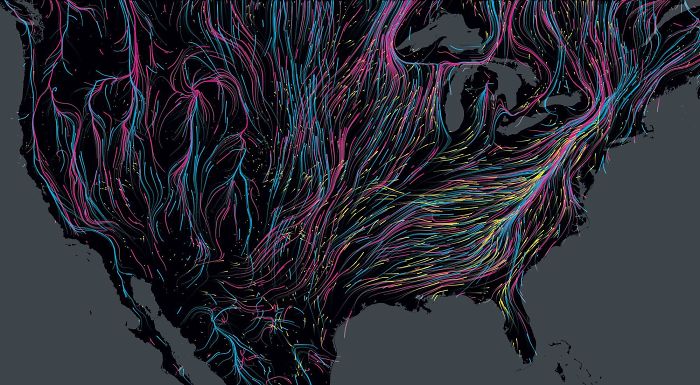 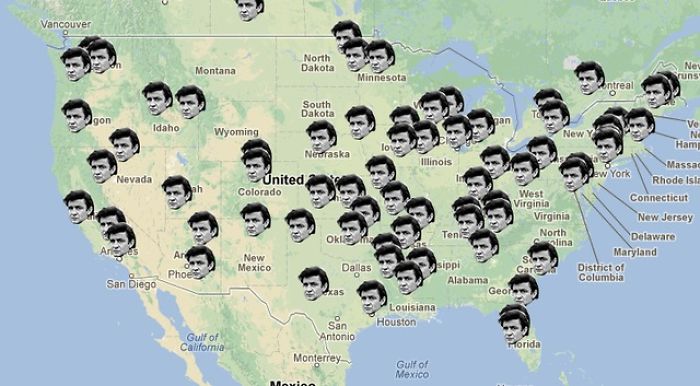 #19 The Surface Of Mars: If, Like Earth, 71% Of Its Surface Area Was Covered With Water 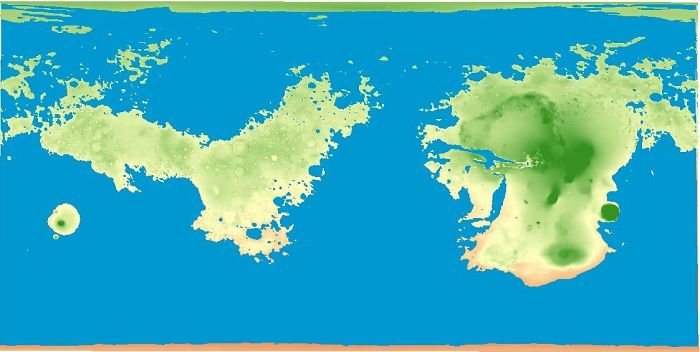 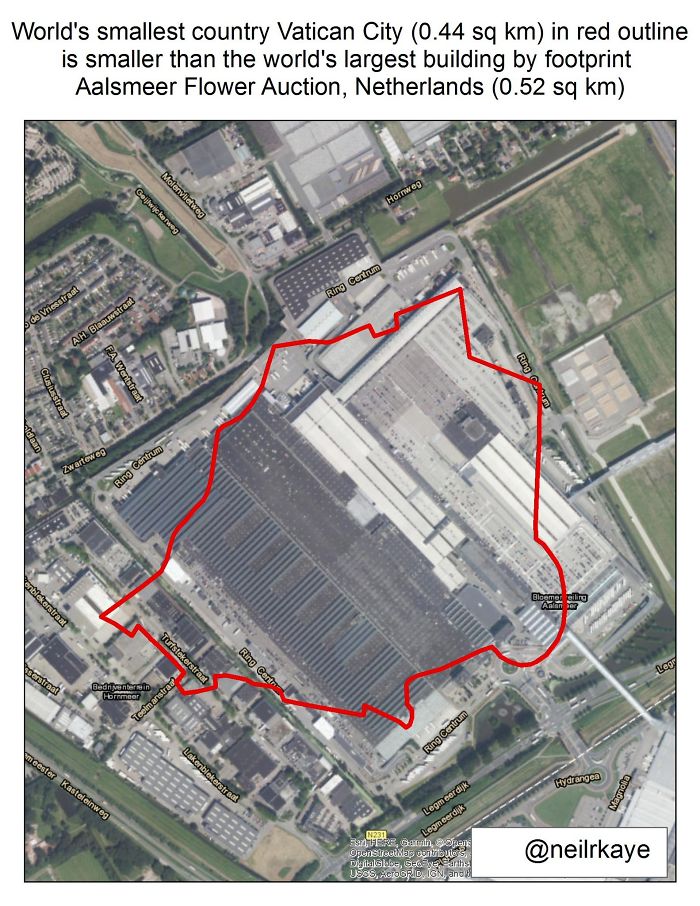 #22 A Europe–U.S. Superhighway Proposed By The Former President Of Russian Railways 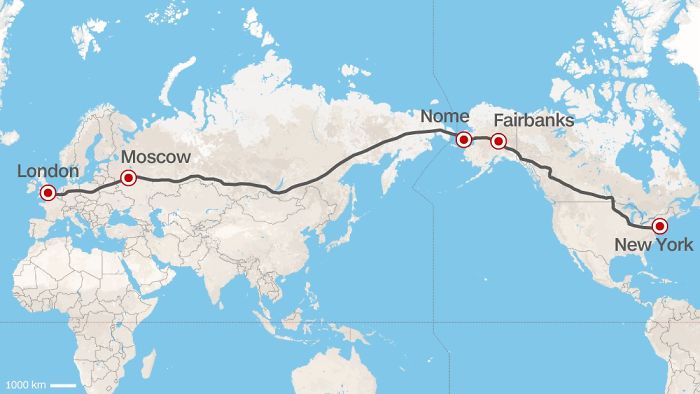 #23 The Decline Of Our Native Tongue Over The Last 2 Centuries, I Find The Maps Rather Than The Reciting Of Statistics, Gives A Far Better Impression On The Overall Erosion Of One Of The Biggest Aspects Of Our Culture, Irish Itself 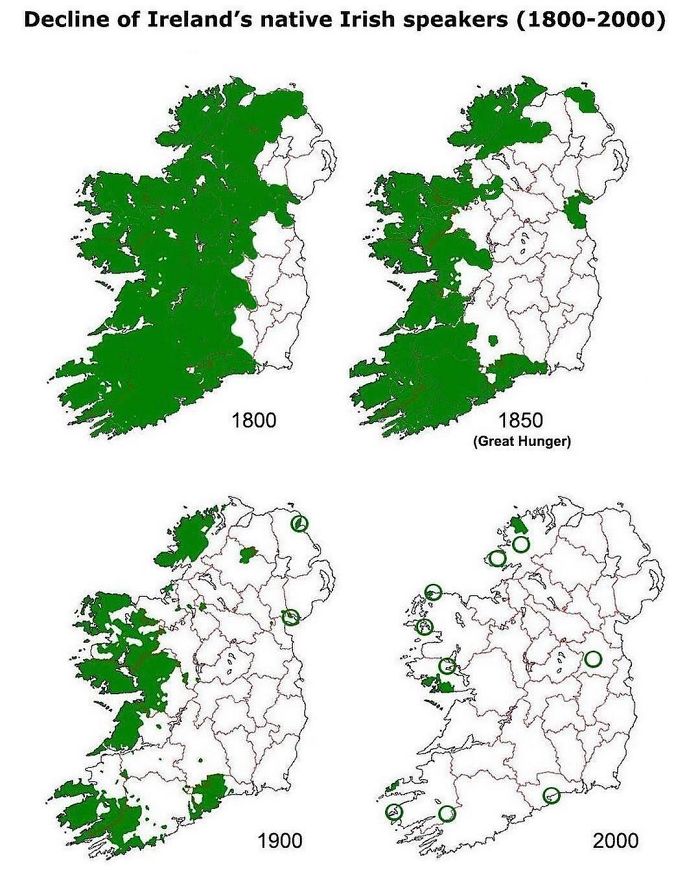 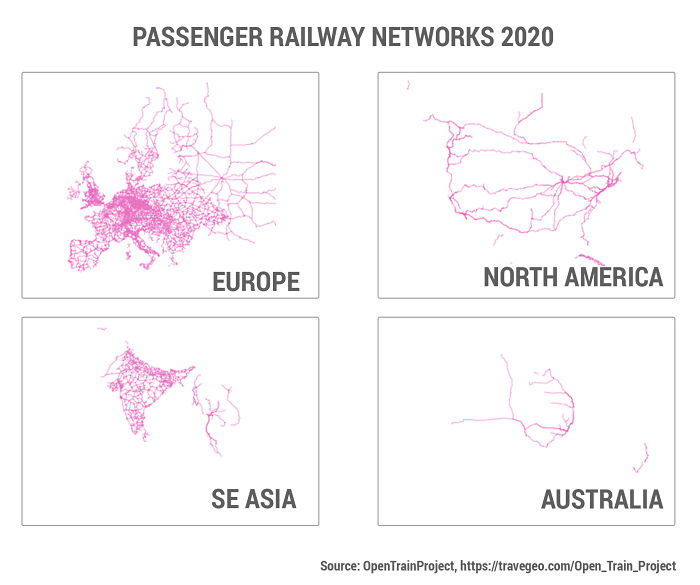 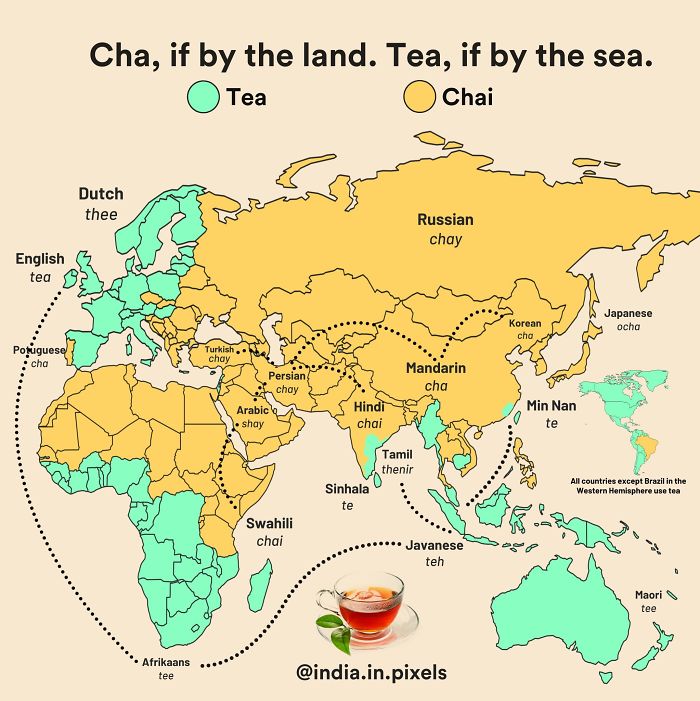 #26 The Topologist’s Map Of The World – A Map Showing International Borders, And Nothing Else 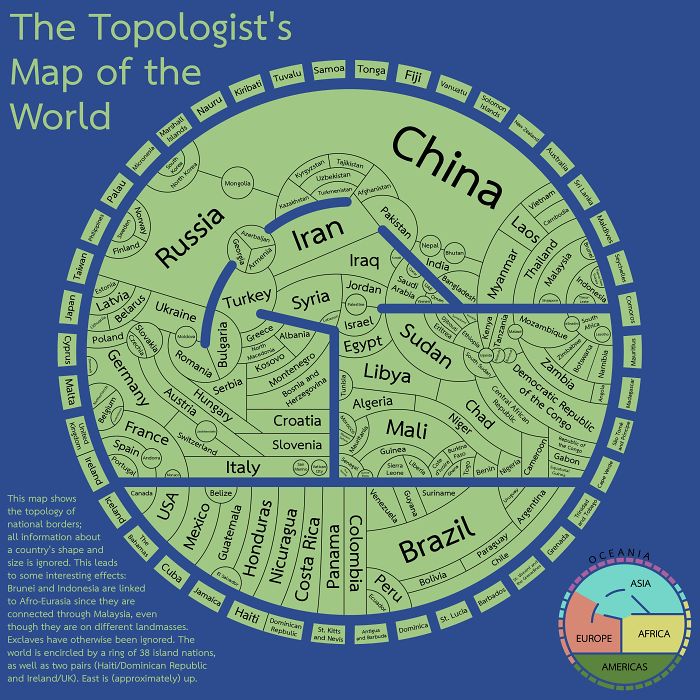 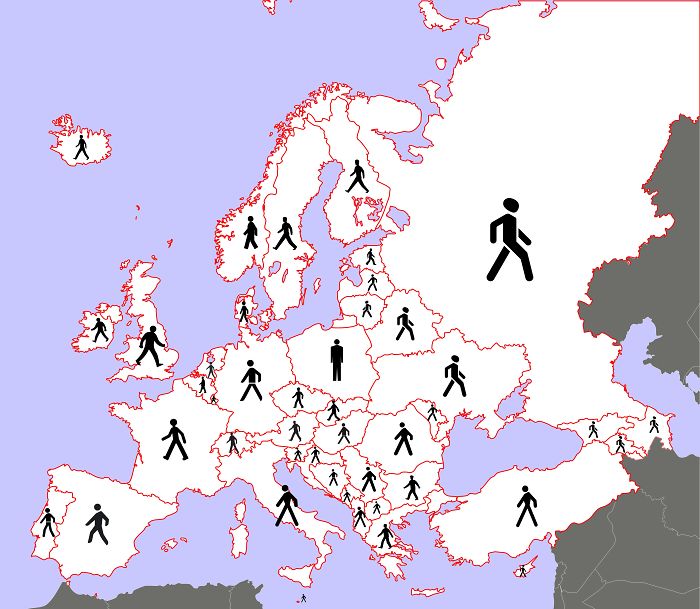 #28 Syria Before And After Civil War 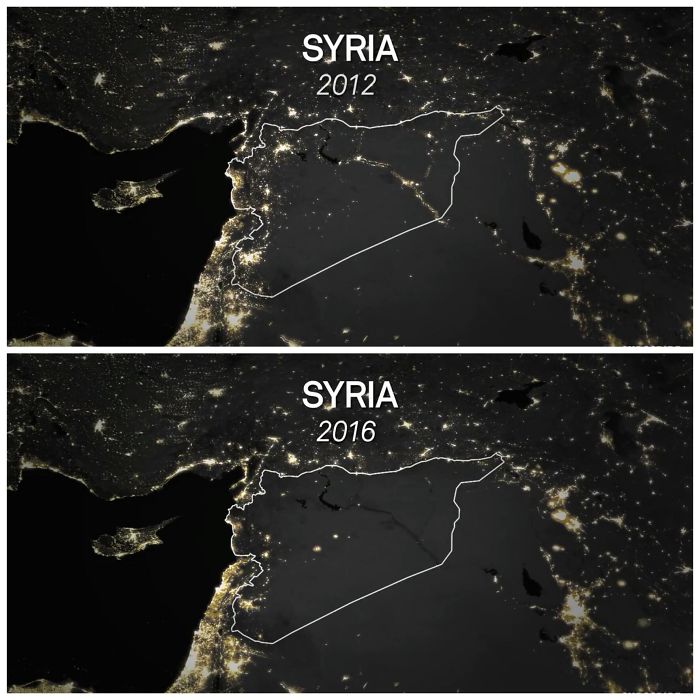 #29 These Two Areas Of Africa Have Roughly Equal Populations 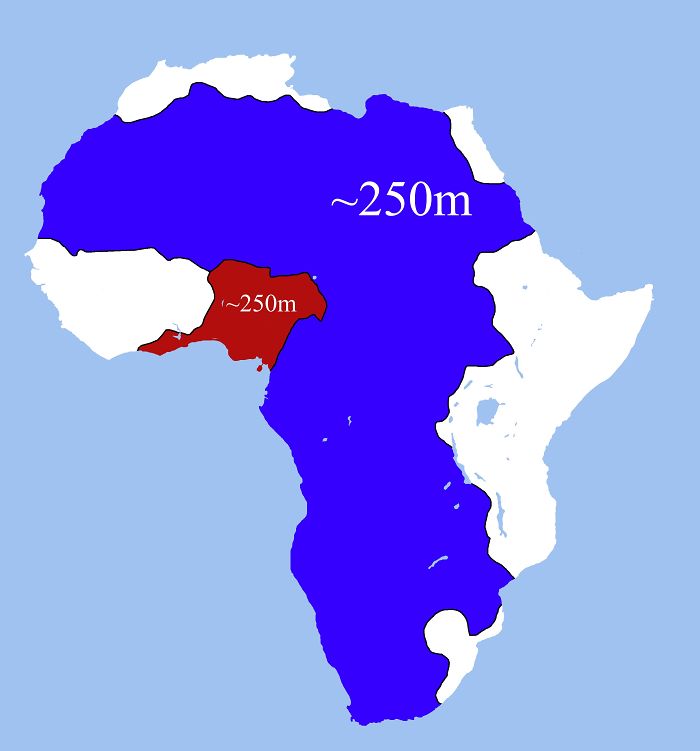 #30 Roads Either Side Of The Border: Finland vs. Russia 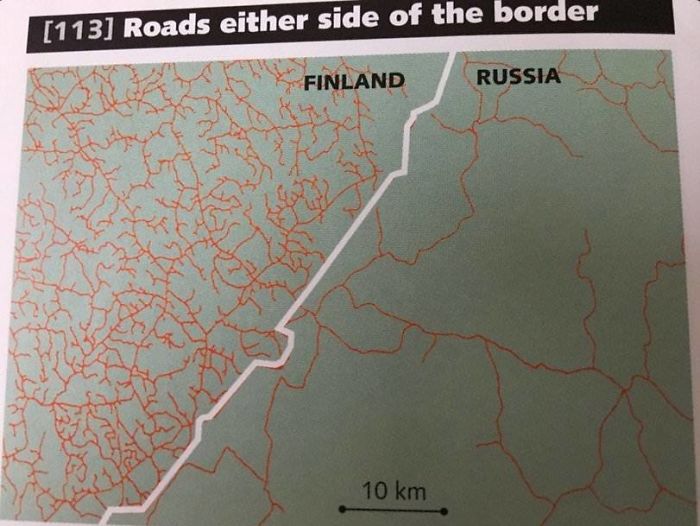 An Earless Seal Can't Stop Hugging A Stuffed Toy That Looks Like His Mini-Me Previous post
Cyclist Snaps An Epic Photo With A Quokka, Which Won't Leave His Side After Next post