The rescued elephants at the Wildlife SOS Elephant Conservation and Care Center in India get a second chance at life after being abused and exploited by their former owners and handlers. Along with finally having the freedom to take walks, bathe and play in water pools, and scratch themselves up against trees, several of the sanctuary’s elephants recently received a new winter wardrobe: giant sweaters lovingly hand-knit by the villagers of Mathura. 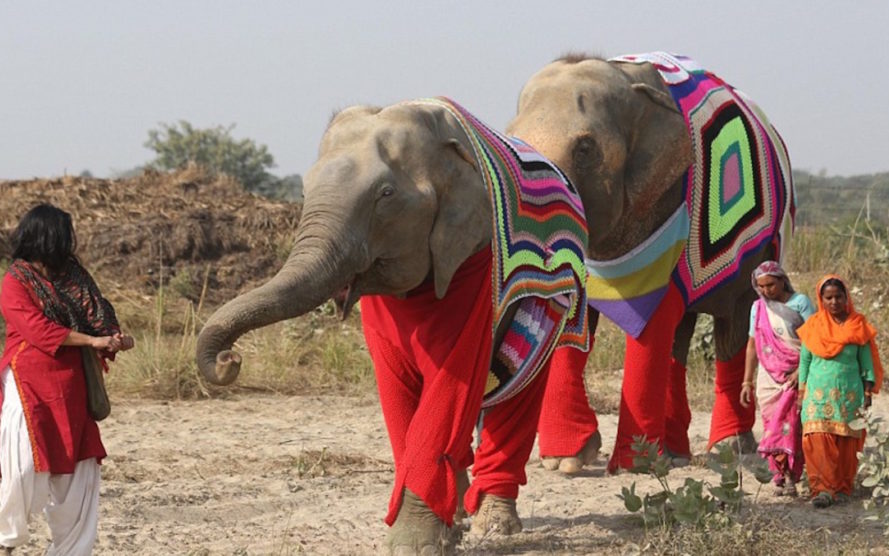 The temperatures at the Wildlife SOS Elephant Conservation and Care Centre in Mathura, India can get quite chilly.

So some ladies in the village near the conservation center took it upon themselves to make sure that the elephants would remain warm and cozy, even if the temperatures got too cold for them to be able to stand. 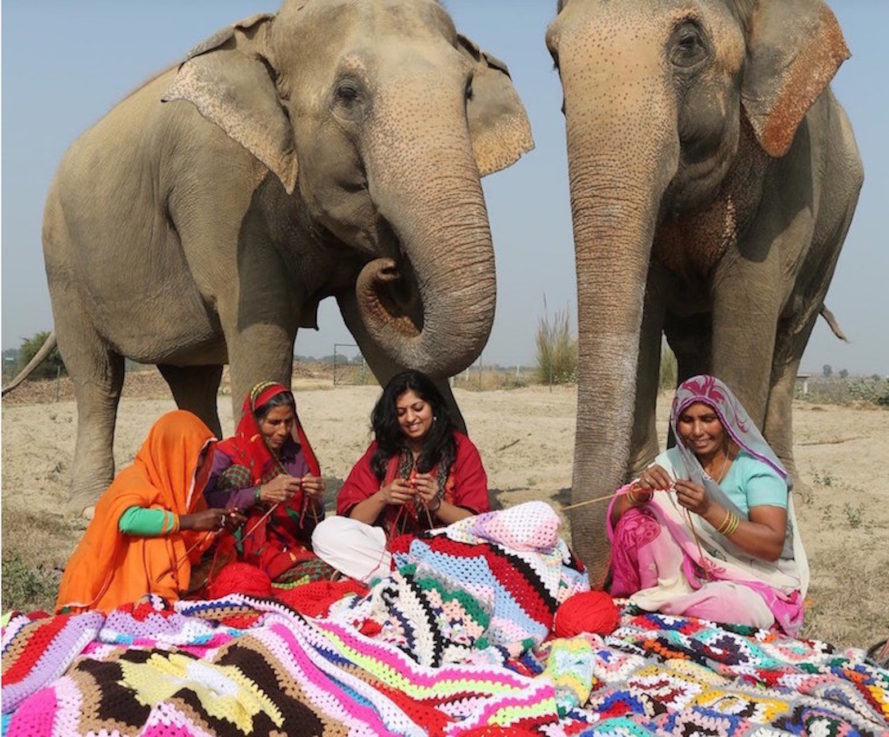 As The Independent reports, village women in Uttar Pradesh knitted giant sweaters for the tusked residents of the Elephant Conservation and Care Center, in the nearby city of Mathura, to keep them warm in sub-zero temperatures.

The Elephant Conservation and Care Center is a haven for rescued elephants, run by wildlife nonprofit Wildlife SOS. Currently, the center shelters 20 animals that were neglected and abused by their prior handlers. The elephants aren’t in great physical shape, so it’s vital to keep them warm when it’s cold out, officials say. 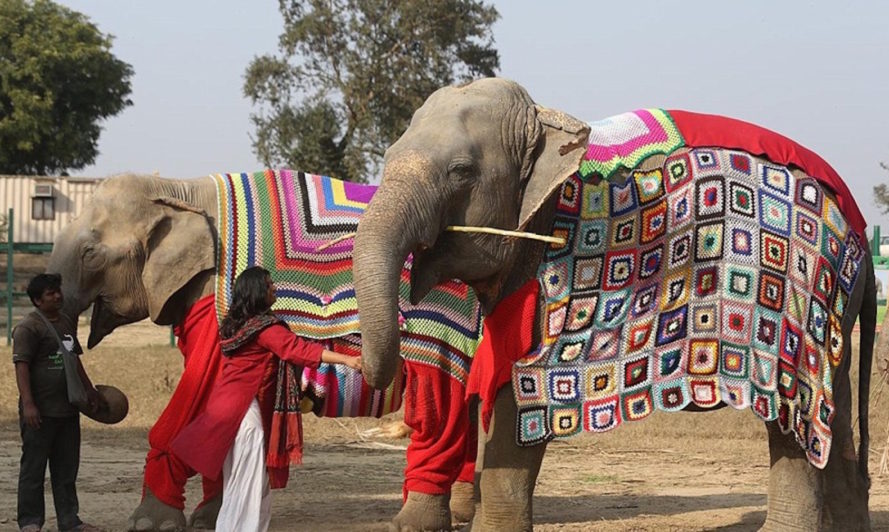 “It is important to keep our elephants protected from the bitter cold during this extreme winter, as they are weak and vulnerable having suffered so much abuse making them susceptible to ailments such as pneumonia,” Wildlife SOS co-founder and chairman Kartick Satyanarayan told The Times of India.

“The cold also aggravates their arthritis which is a common issue that our rescued elephants have to deal with.”

Wildlife SOS plans to expand the conservation center’s facilities in 2017 and rescue an additional 50 elephants. Hopefully, temperatures will have warmed up by then—but if not, locals can break out the yarn and knit for a cause. 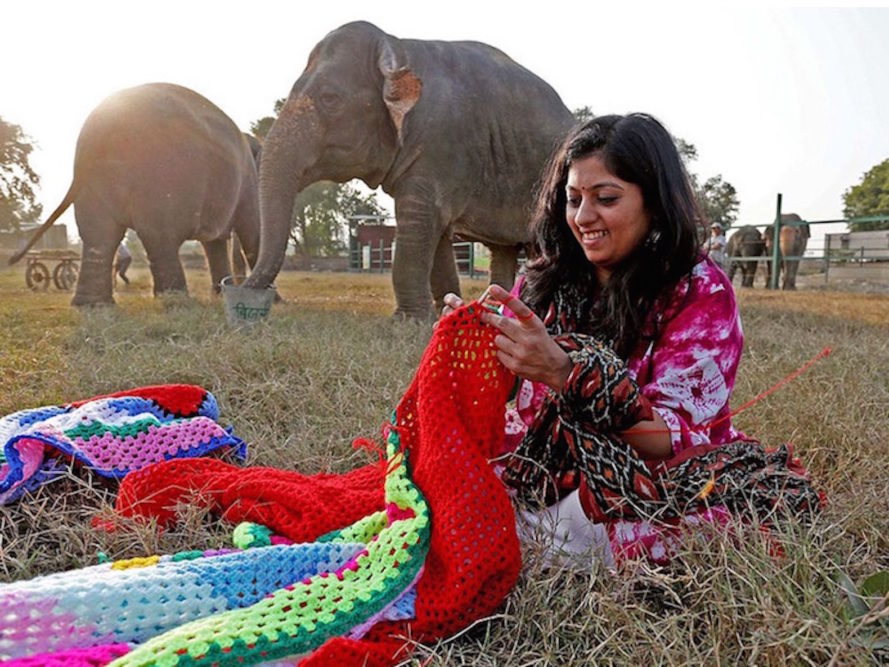 The first two elephants to get their blankets were female elephants Laxmi, Phoolkai, and Suz.

They all look very fashion-forward in their new gear! How cute is it that the ensemble even comes with leg warmers? We can’t imagine that they’d be cold in an outfit like this. Although, it must have been embarrassing to show up in the same outfit as someone else. We’re pretty sure that this is a fashion faux pas even for elephants!

Apparently, the elephants really love their super warm sweaters. Which is a good thing, because so much TLC went into making them.

“They really took to their jumpers! I know in some countries it is a bit of a joke to wear the most outlandish one you can for Christmas,” said Kartick Satyanarayan, founder of the Wildlife SOS Elephant Conservation and Care Centre. “But the elephants care less about fashion and more about being warm,” Satyanarayan continued. 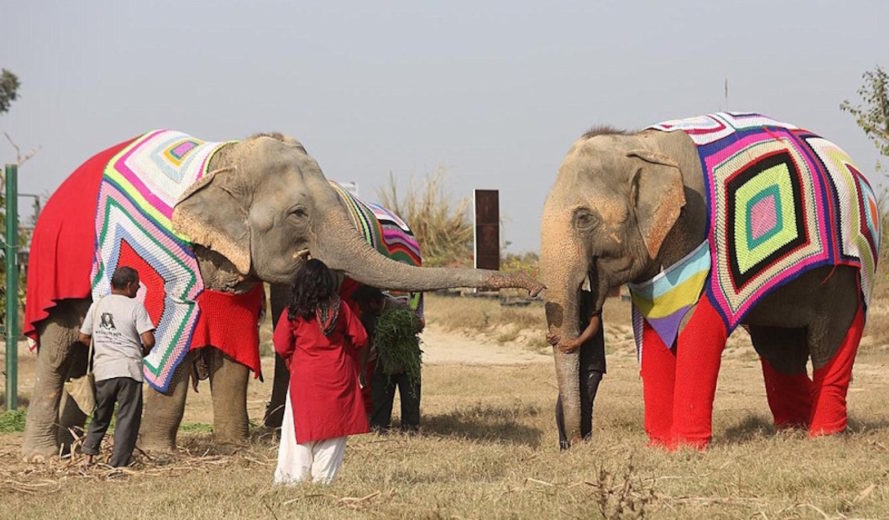 Check out the elephants’ sweater-weather style in the video below, courtesy of The Better India.

Wildlife SOS was started in 1995 in order to conserve India’s natural wildlife, forest, and heritage. They don’t just save elephants, they work to protect all wildlife, including tigers, sloths bears, pangolins, and yes, elephants, too!

You can actually visit the Wildlife SOS Elephant Conservation and Care Centre if you’re traveling to Mathura.

You’ll learn what hardships elephants go though, beyond just getting cold. Captive elephants receive “training” that they oftentimes don’t survive.

You can even volunteer at the Wildlife Elephant Conservation and Care Centre if you’re so inclined. Who wouldn’t want to take care of an elephant? They’re so cute, and they seem like they’re smart enough to appreciate your TLC.