A moose is back on the loose after spending several hours in a south Ottawa swimming pool Friday morning.

Homeowner Paul Koch was surprised to find the animal taking a dip in his backyard pool when he walked to his window.

Read also: Moose And Its Cute Calves Spend A Day At This Family’s Backyard, And The Owner Documented How It Went

“I looked out in the backyard and there’s this moose absolutely panicked and struggling,” Koch told The Dodo. “She stepped on the solar blanket and put her foot through it and got all tangled up and she was desperately trying to get free.”

“It’s still a mystery to me how she got in the backyard,” Koch said. “She’d have to jump a minimum of a five to five-and-a-half-foot fence to do it.”

The moose spent several hours swimming around in the pool at the home near Hunt Club Road and Uplands Drive, later moving to the shallow end to stand up.

The Koch’s woke up to a full grown moose in their pool. Ministry of natural resources is on their way. It’s been about 2 hours. #ottnews @ctvottawa pic.twitter.com/1OXCFSgtNh

Koch has noticed more wildlife around his home in Ottawa, Canada, since the COVID-19 outbreak, but he had never seen an animal this impressive before. “We’ve lived in this house for 40 years, and this is the first time I’ve seen a moose this close to the city,” Koch said.

Koch rushed outside and pulled the solar cover off the grateful moose, who continued paddling around the pool, proving to be a surprisingly adept swimmer. 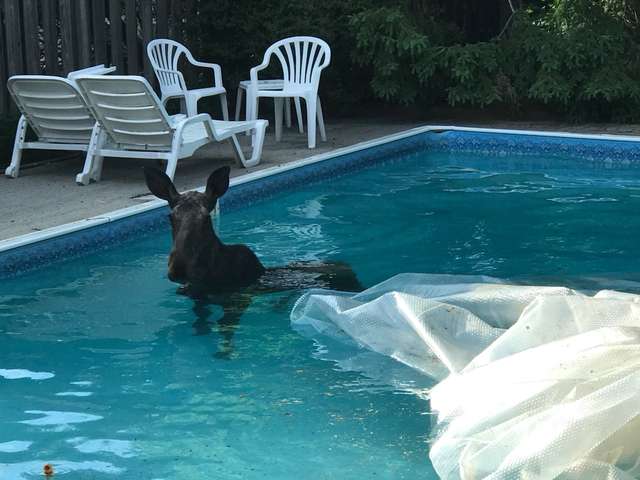 It wasn’t clear whether the animal is trying to find a way out of the pool, or simply enjoying a cool bath. At times, Koch said, she looked a little lonely. “My wife would like to give her a hug.”

Moose are born knowing how to swim and spend much of their time in the water — especially in the winter when they graze on underwater plants. They can even shut their large nostrils and hold their breath for up to a minute.

The wild moose seemed to be having trouble finding her way out of the pool, so Koch called the police and wildlife services to see if they could lend a hand. “She looked so forlorn out there that my wife said, ‘I want to give her a hug,’” Koch said. 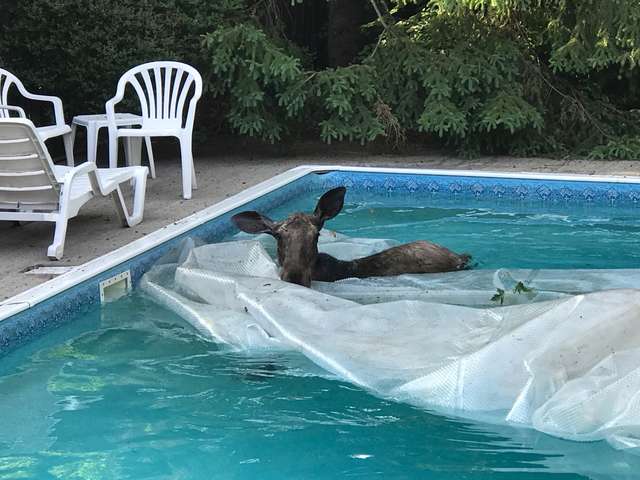 Police, conservation officials, and National Capital Commission staff all arrived at the scene.

Around 10:30 a.m., Koch said the moose climbed out of the pool, ran across the yard, and hopped the fence into another yard, quickly becoming the talk of the neighborhood.

“I live nearby, so I just thought I’d check it out,” neighbor Mike Vorobej said. “It’s a big fence and it went over. We don’t see them that often. It’s really a cow on stilts.”

Police at the scene said the moose crossed Hunt Club Road and headed down Uplands Drive, heading for the woods beyond.

Police later said the moose had “rejoined its buddies” in the forest.

The moose punched a serious hole in the Kochs’ pool lining. But despite the repairs they’ll have to make, the Kochs say this was a highlight of their 40 years as homeowners. 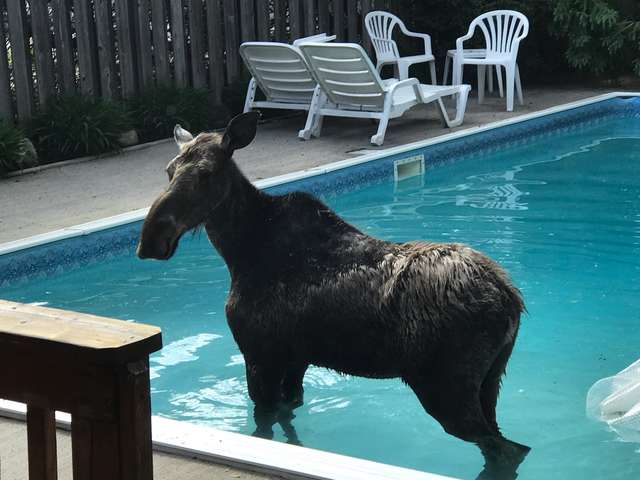 “The best thing that happened was that after three and a half hours she climbed out of the shallow end and jumped over the fence,” Koch said. “The police came back and told me that she got back to the wooded area that she had come from.”

The moose escaped unscratched, but the same can’t be said for Koch’s pool — which now has two hoof-sized holes in the bottom.

Lion Cub's Legs Were Broken So He Wouldn't Escape From Tourists Who Want To Take Pics. Thankfully, He Got Rescued And Treated Previous post
High School Cancels Prom, but This Teen Holds His Own and Takes His Dog Next post