Each castle around the world has its own history. A lot of them survived wars, fires, dozens of generations. We will narrow down to the castles in the European landscape that are worthy of their own fairytale. From the Greek Islands to the rocky cliffs of Scotland, each castle embarks on itself a hundred years of human history. Most of them are built with bricks and stones, but they still remain to be a very intriguing point for visitors around the world.

Here are 20 less famous castles that you can visit to experience the royalty even just for a day.

The palace of Pena, Sintra Portugal 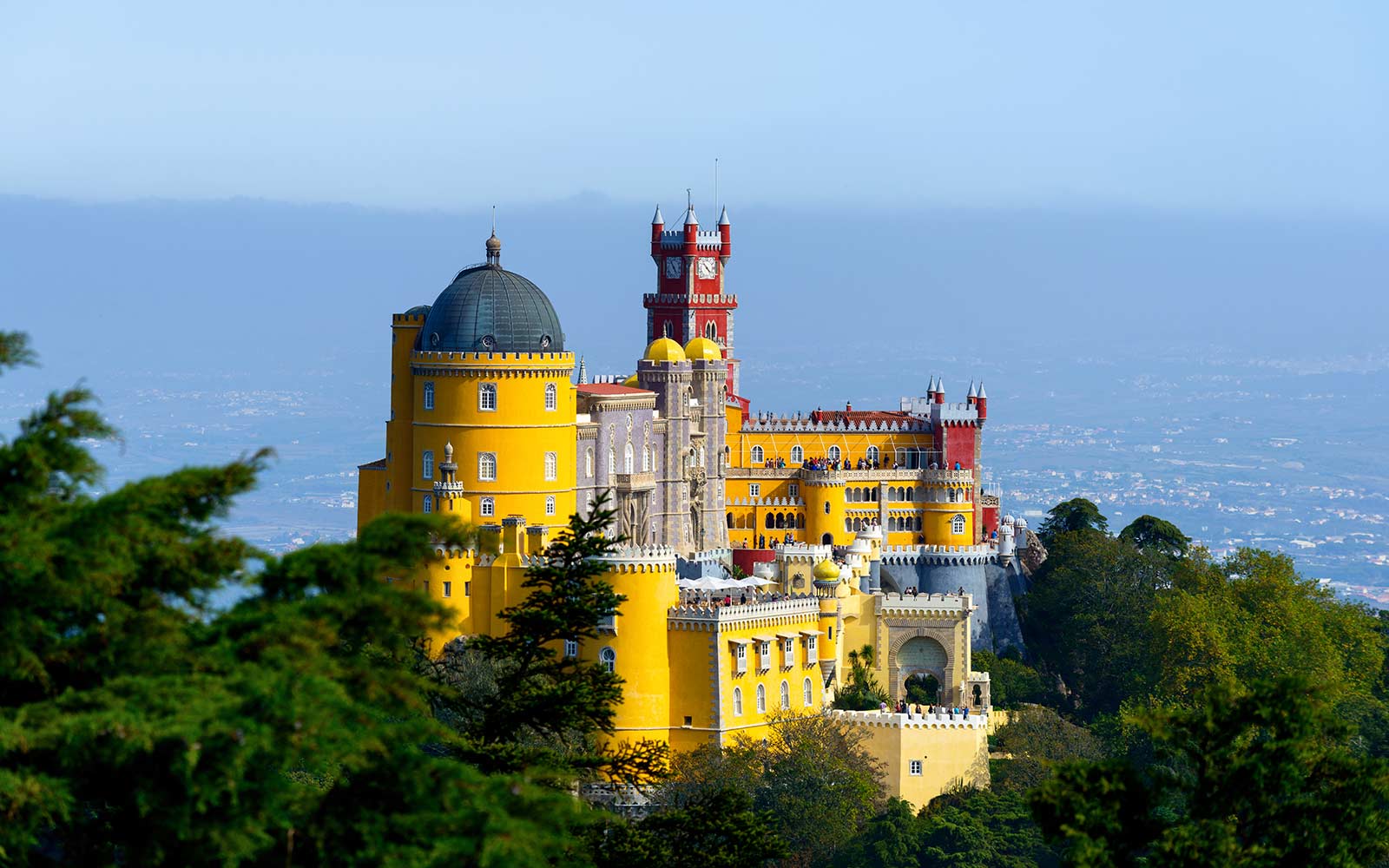 Pena palace in Sintra, Portugal.
The colorful castle sits high in the hills above the town of Sintra, Portugal, and it’s surrounded by a vast forest with plants from around the world, just the way King Ferdinand II wanted. Built-in 1854 the castle is still functional, used by the President of the Portuguese Republic and other government officials. 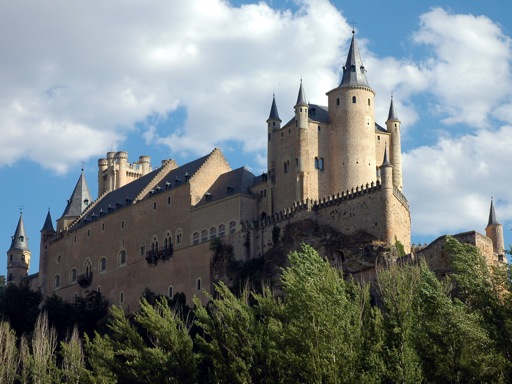 The Alcázar of  Segovia was originally built as a fortress on a hillside between two rivers, but also served as a royal palace, a state prison, and a military academy. Though the true age of the castle is unknown, the earliest documentation of the Alcázar dates back to the early 12th century. It is located 53 miles northwest of Madrid and visitors are encouraged to climb the “Tower of Juan,” where they can take in breathtaking views of the community below. 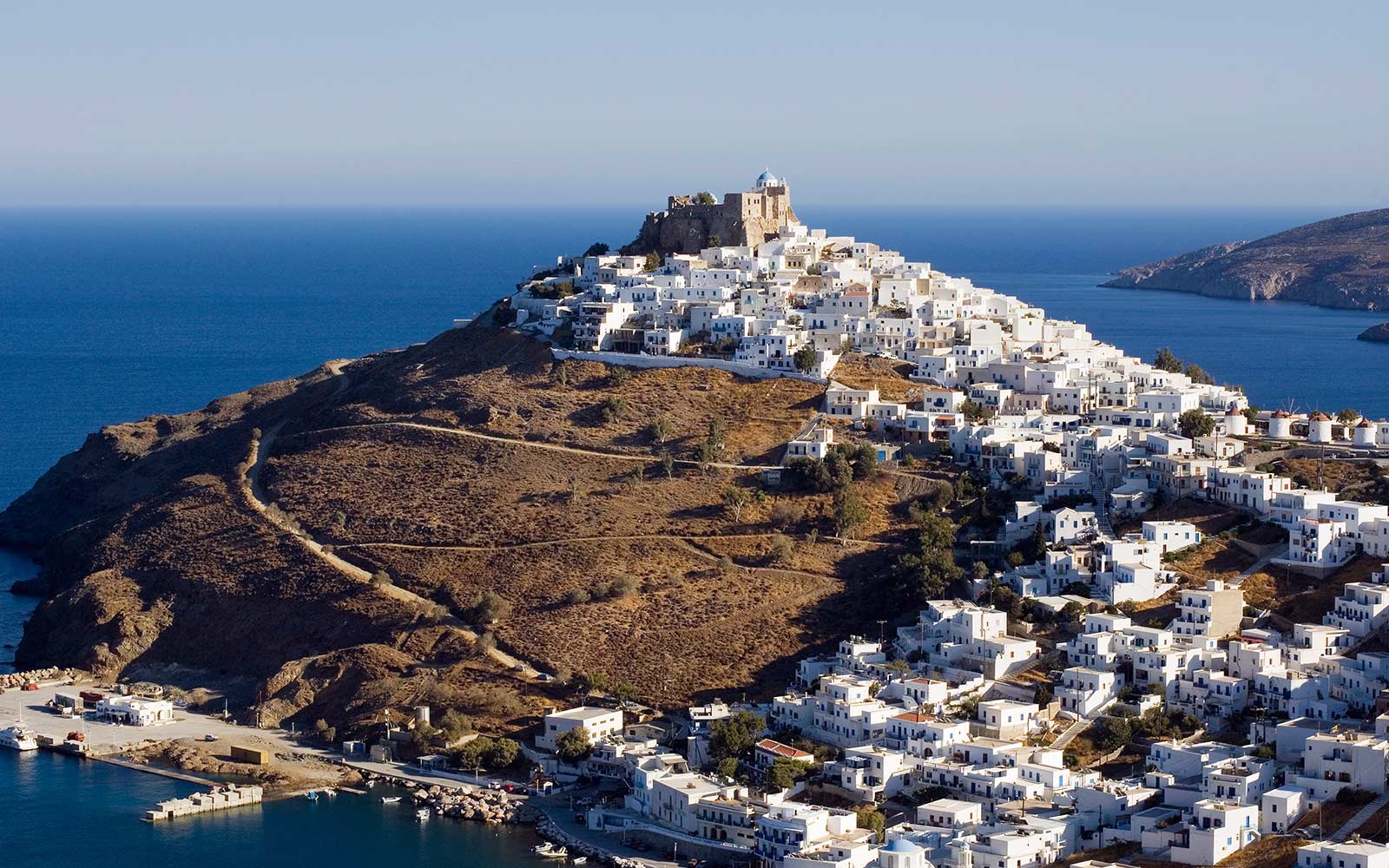 Greece, Aegean islands, Dodecanese, Astypalaia island, Mediterranean area, Mediterranean sea, Aegean sea, View of Chora of AstypaleaThis magical castle sits atop of the entire community, with its black stone exterior contrasting to the traditionally whitewashed Greek town. The castle was constructed by John Querini in 1204 and was used as a shelter against pirates. Now it’s opened for visitors around the world to come and enjoy. 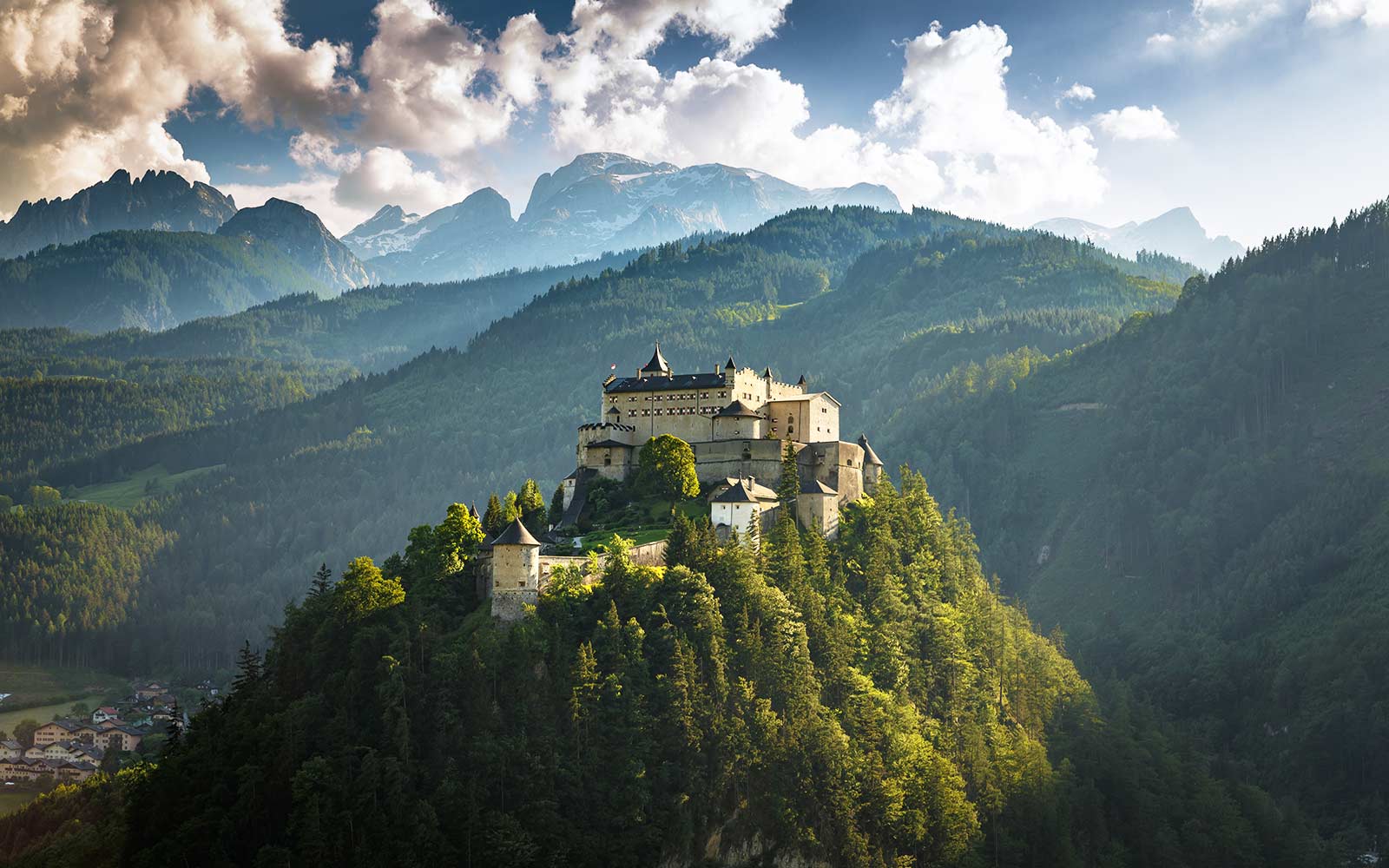 Hohenwerfen Castle stands high above the Austrian town of Werfen in the Salzach valley, approximately 40 km south of Salzburg. The castle is surrounded by the Berchtesgaden Alps and the adjacent Tennengebirge mountain range. The fortification is a “sister” of Hohensalzburg Castle both dated from the 11th century. Hohenwerfen Castle is situated at a height of 623 meters

This Austrian castle has an amazing structure that dates back more than 900 years. It sits more than 2,000 feet above sea level. Today it serves as a museum and leaves each visitor breathless. 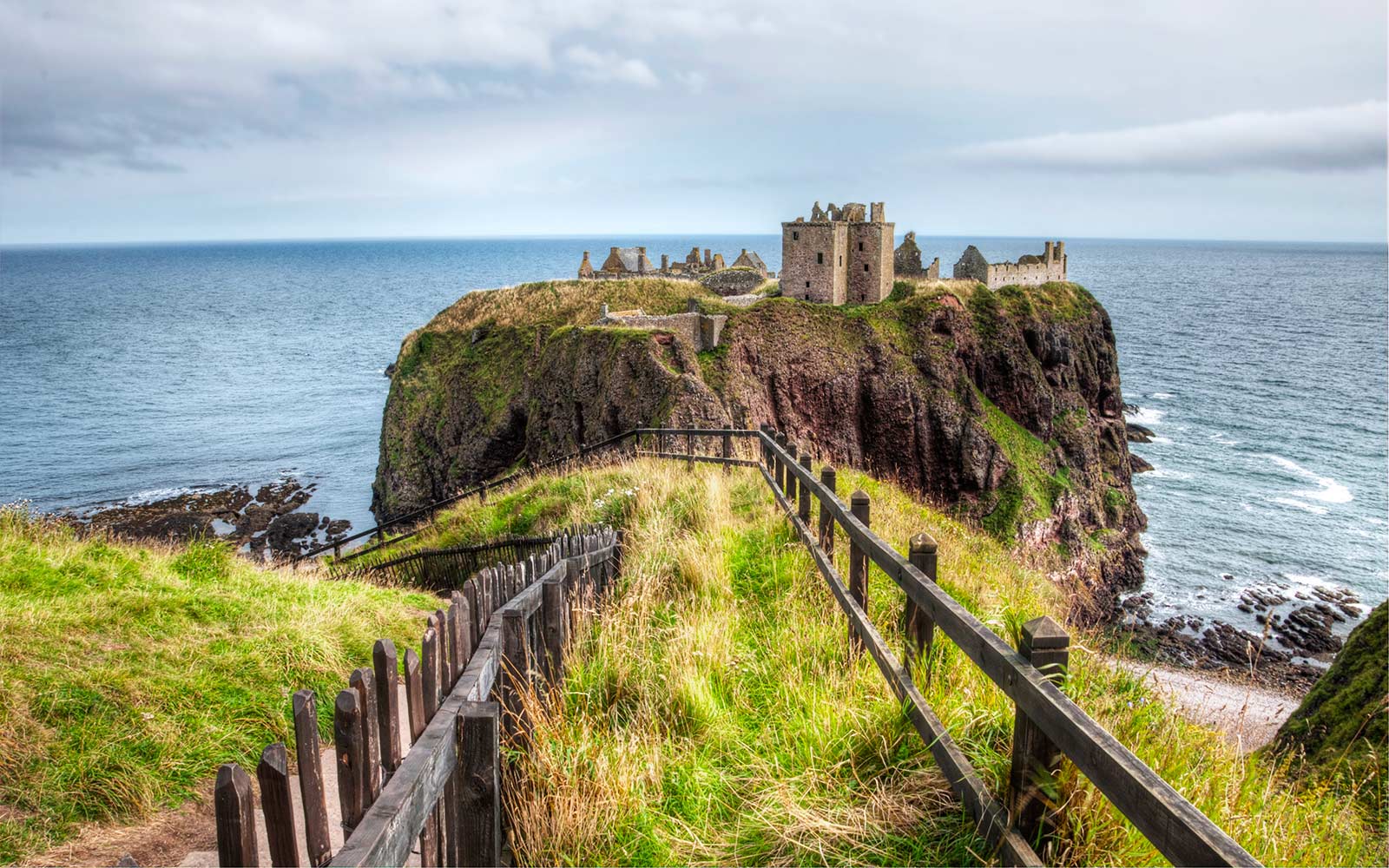 The historic remains of Dunnottar castle looking out on the North Sea, Scotland

This castle is believed to date back to the early middle ages. Even today the castle’s remains still include its 14th-century tower house as well as its 16th-century palace and were once home to the Earls Marischal, one of the most powerful families in  Scottish history. The castle’s open for the visitors daily, it only closes for inclement weather. 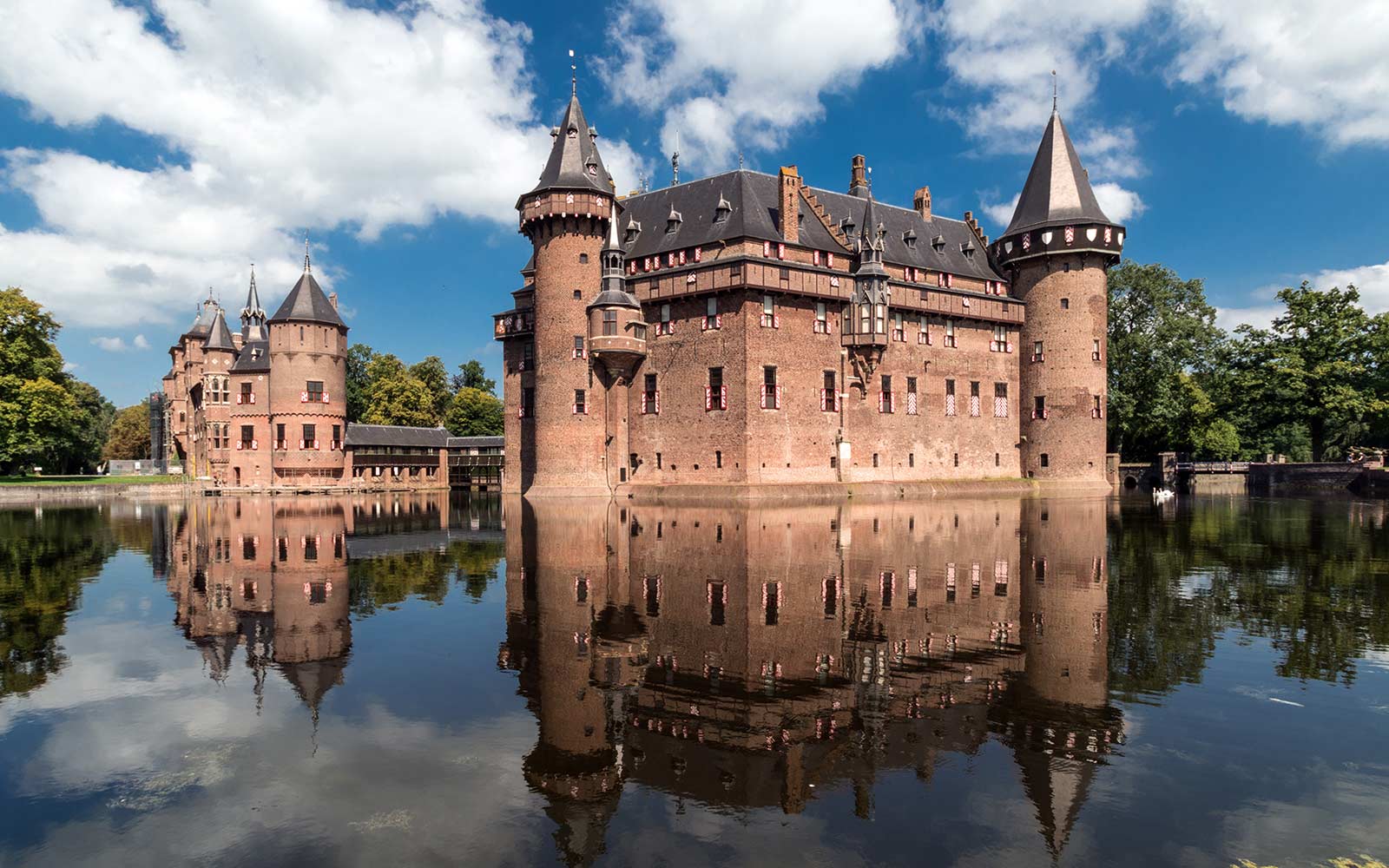 Castle De Haar is located near Haarzuilens, in the province of Utrecht in the Netherlands. The current buildings, except for the chapel, date from 1892 and are the work of Dutch architect P.J.H. Cuypers, in a Neo-Gothic restoration project funded by the Rothschild family.Even thought the castles foundation dates back to 1391, the site was fully rebuilt in 1892 and now display all the majesty of the early 20th century. The interior of the castle is filled with ornate wood carvings, plush furniture, and old porcelain from Japan and China. The castle’s owners, the Van Zuylen van Nijevelt family continue to reside in the home for one month each year, as they have done for over a century. 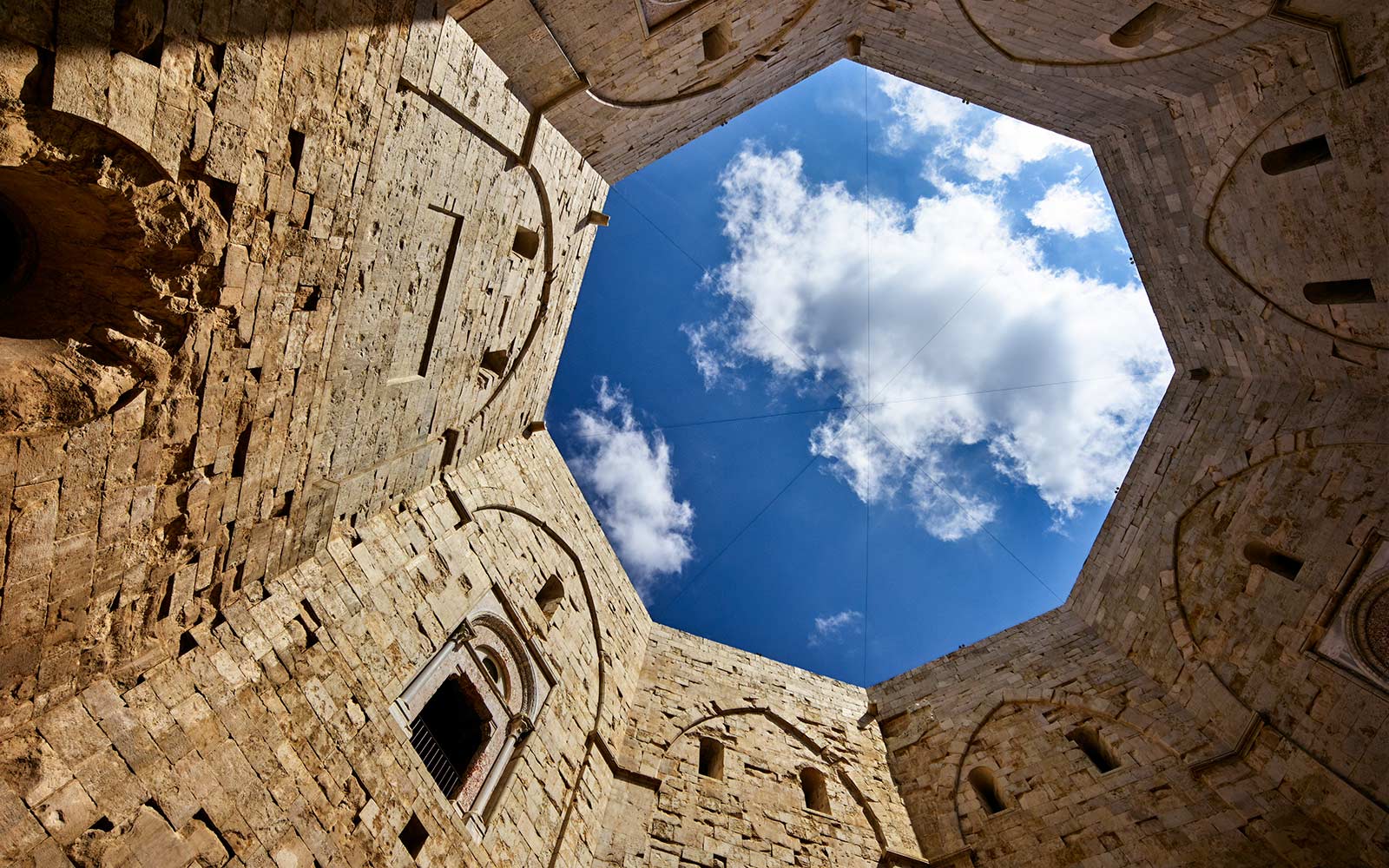 Castel del Monte is a 13th-century citadel and castle situated on a hill in Andria in the Apulia region of southeast Italy . It was built during the 1240s by the Emperor Frederick II, who had inherited the lands from his mother Constance of Sicily.Castel del Monte in Puglia, Italy may look familiar and with good reason: The castle is featured on the backside of the Italian 1 Euro Cent piece. The castle’s construction was completed in 1240 by Fredrick II of Hohenstaufen, whose love of science is clearly evident in the building’s unique octagonal shape. In the 18th century, the castle’s interior marbles and remaining furnishings were removed. It has neither a moat nor a drawbridge and some considered it never to have been intended as a defensive fortress, however, archaeological work has suggested that it originally had a curtain wall. Visitors can explore its grounds year-round except for Christmas and New Year’s day. 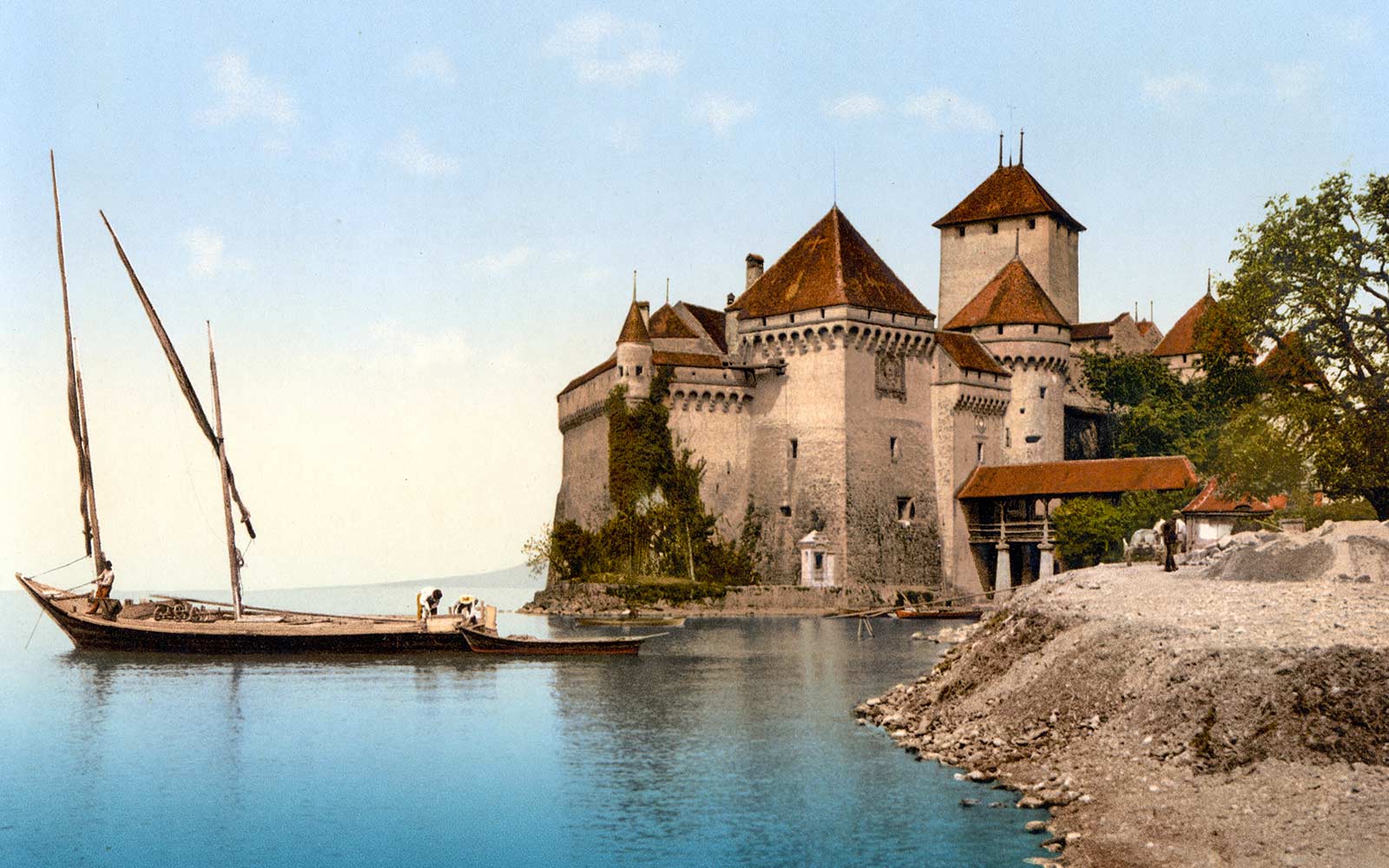 Chillon Castle is located on the rocky shores of Lake Geneva, near the border of Switzerland and France. The building as it currently stands is the result of hundreds of years of renovations, though the site has been occupied since the Bronze Age. Tourists are welcome to roam the castle and its grounds, but from June to October visitors can also experience something extra special by renting out the small stretch of discreetly hidden beach along Chillon’s shores. 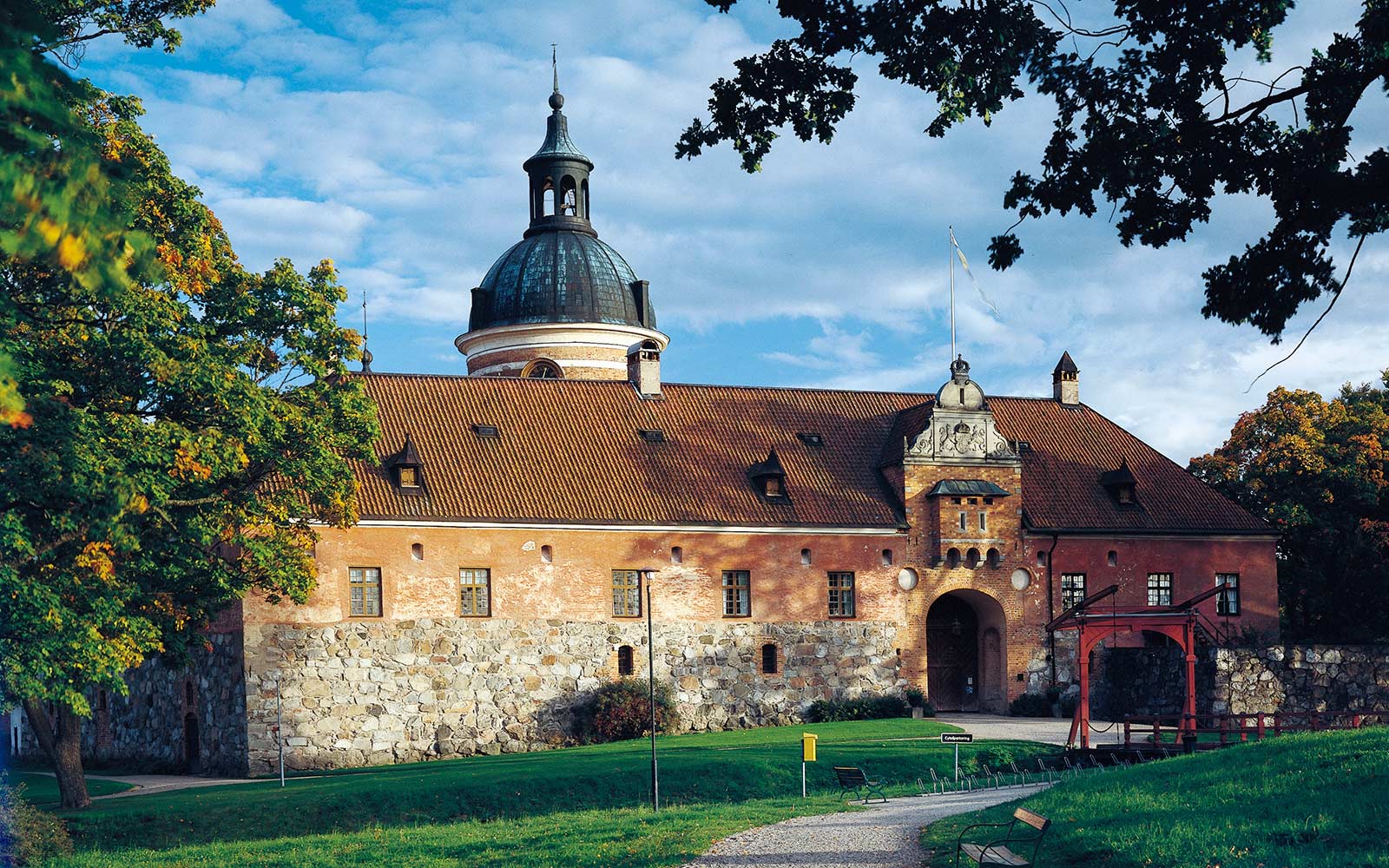 Gripsholm Castle, on the shore of Lake Malaren, west of Stockholm, built by King Gustav Vasa in 1537. Sweden, 16th century.

Gripsholm Castle, which sits on the banks of Lake Mälaren, was built in 1537 and maintains all of its old world charm and royal luxury. Visitors of the castle are invited to take a leisurely stroll through the castle grounds, visit the castle’s theater within one of the round towers built in 1780 by King Gustav III, or meet the royal deer at the  Hjorthagen nature reserve. 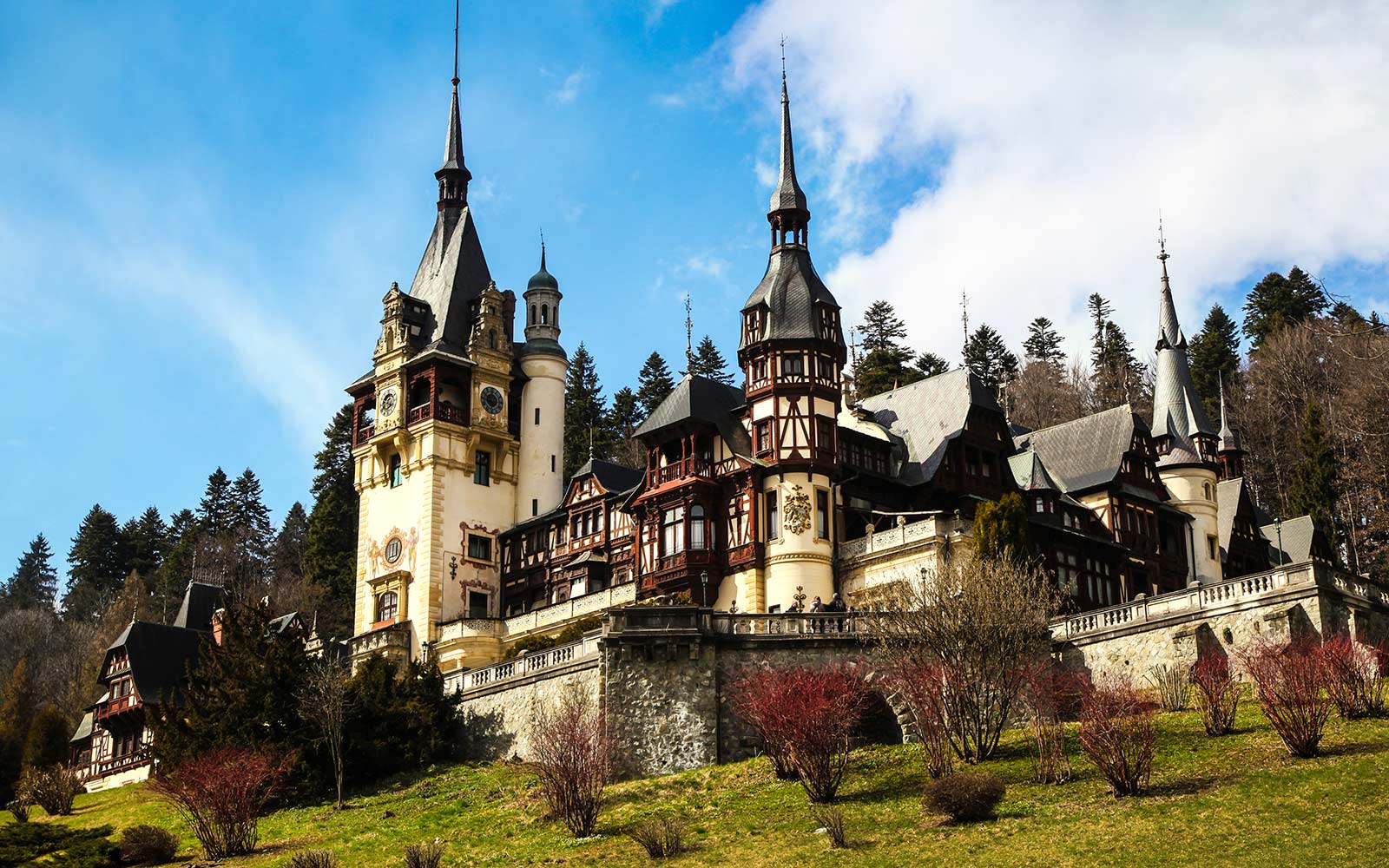 Peles Castle is tucked at the base of the Bucegi Mountains in the small town of Sinaia, Romania. Commissioned by King Carol I in 1873 and completed in 1883, the castle’s vibrant and colorful exterior make it the perfect storybook travel destination. Each of its 160 rooms are decorated with European art, German stained-glass windows, and leather walls. Though not as famous as Bran Castle, aka the home of Dracula located 30 miles away, Peles Castle should still be on everyone’s Romanian itinerary. 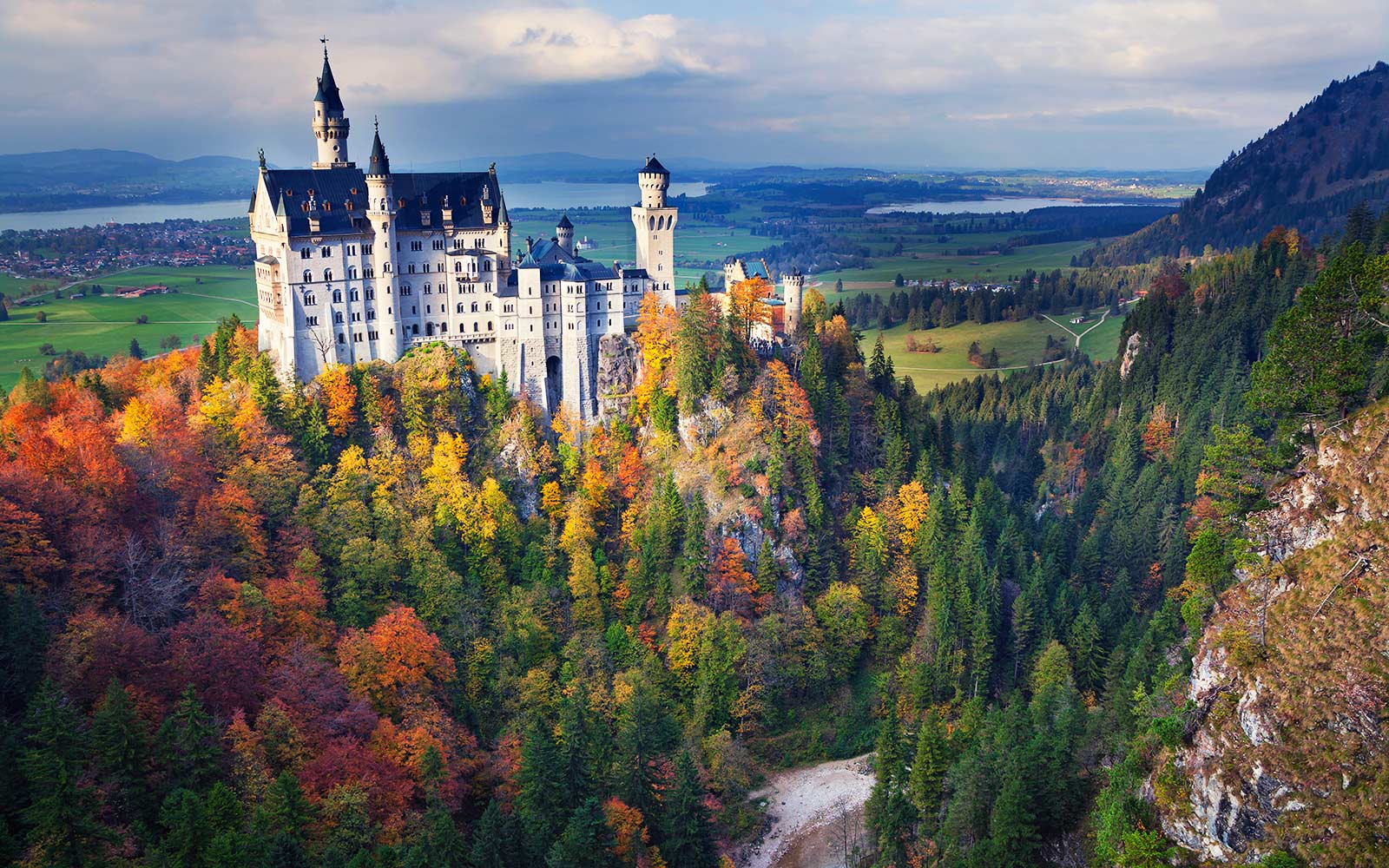 Like many fortresses, Neuschwanstein Castle was built on rugged terrain as a safe retreat. The picturesque Bavarian white castle was meant to be the personal home of Ludwig II of Bavaria but was opened to the public  immediately after his death in the late 1800s. The home, however, is not fairing as well as others. The harsh area climate has had a detrimental effect on the limestone facades, which will be renovated section by section over the next few years. The interior, however, remains as charming as ever, adorned with white swans denoting the Christian symbol of the “purity,” which Ludwig allegedly strived to be. 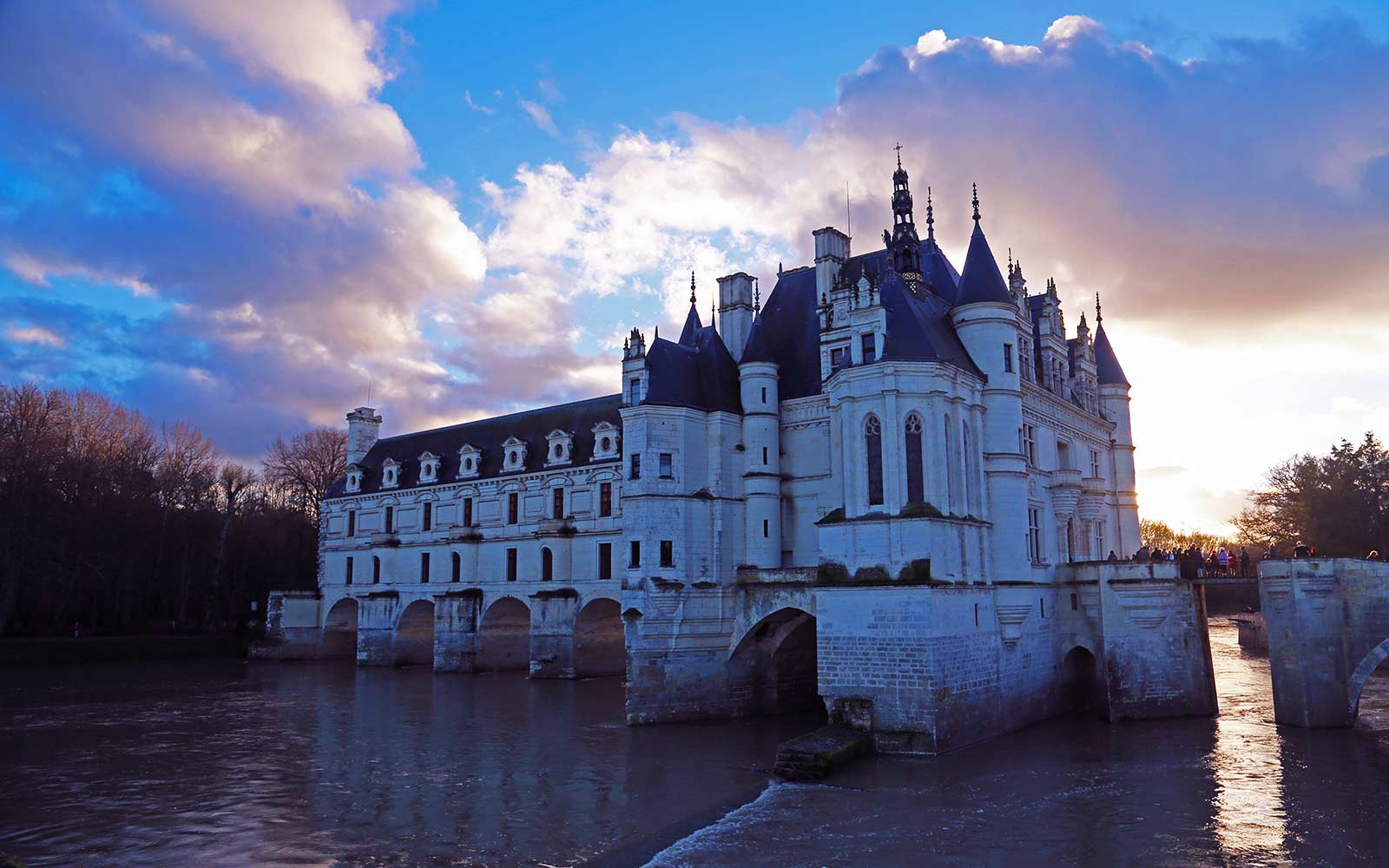 Chenonceau Castle near the small village of Chenonceaux, France spans the River Cher and was built sometime around the 11th century. The mix of late Gothis and early Rennaisance  architecture gives the castle a unique look. The castle made it through both World Wars, acting as a hospital ward in the first and survived a bombing by the Germans in June 1940. 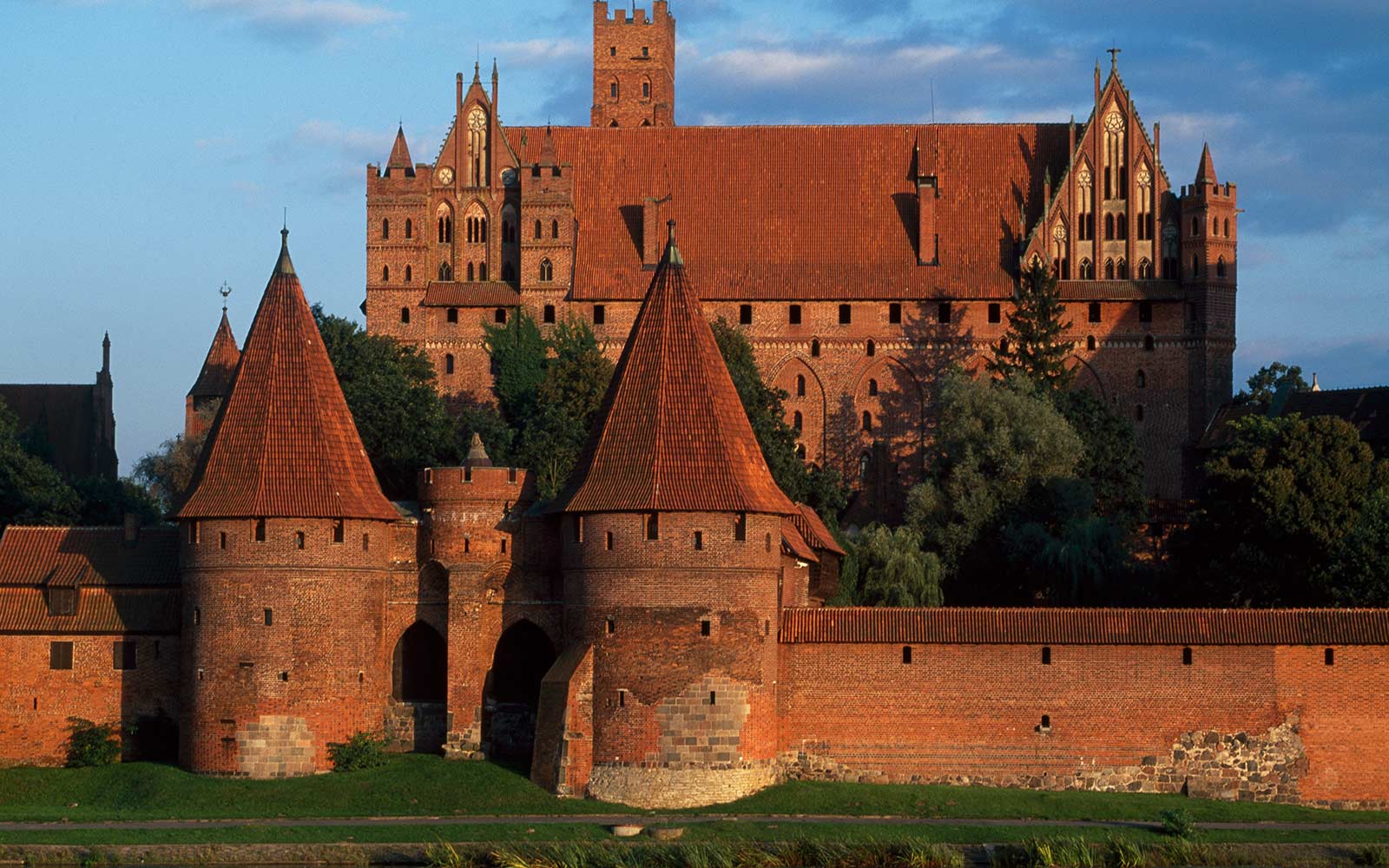 The Great Castle of Malbork, Poland, 14th century. One of the largest castles in Europe and HQ of the Teutonic Knights.

The Castle in Malbork is a 13th-century fortified monastery belonging to the Teutonic Order. The medieval brick castle is an officially designated UNESCO World Heritage Site and is one of Poland’s national Historic Monuments. The meticulously restored castle, which was once home to Polish kings, welcomes visitors year-round to visit both the grounds and its amazing view. 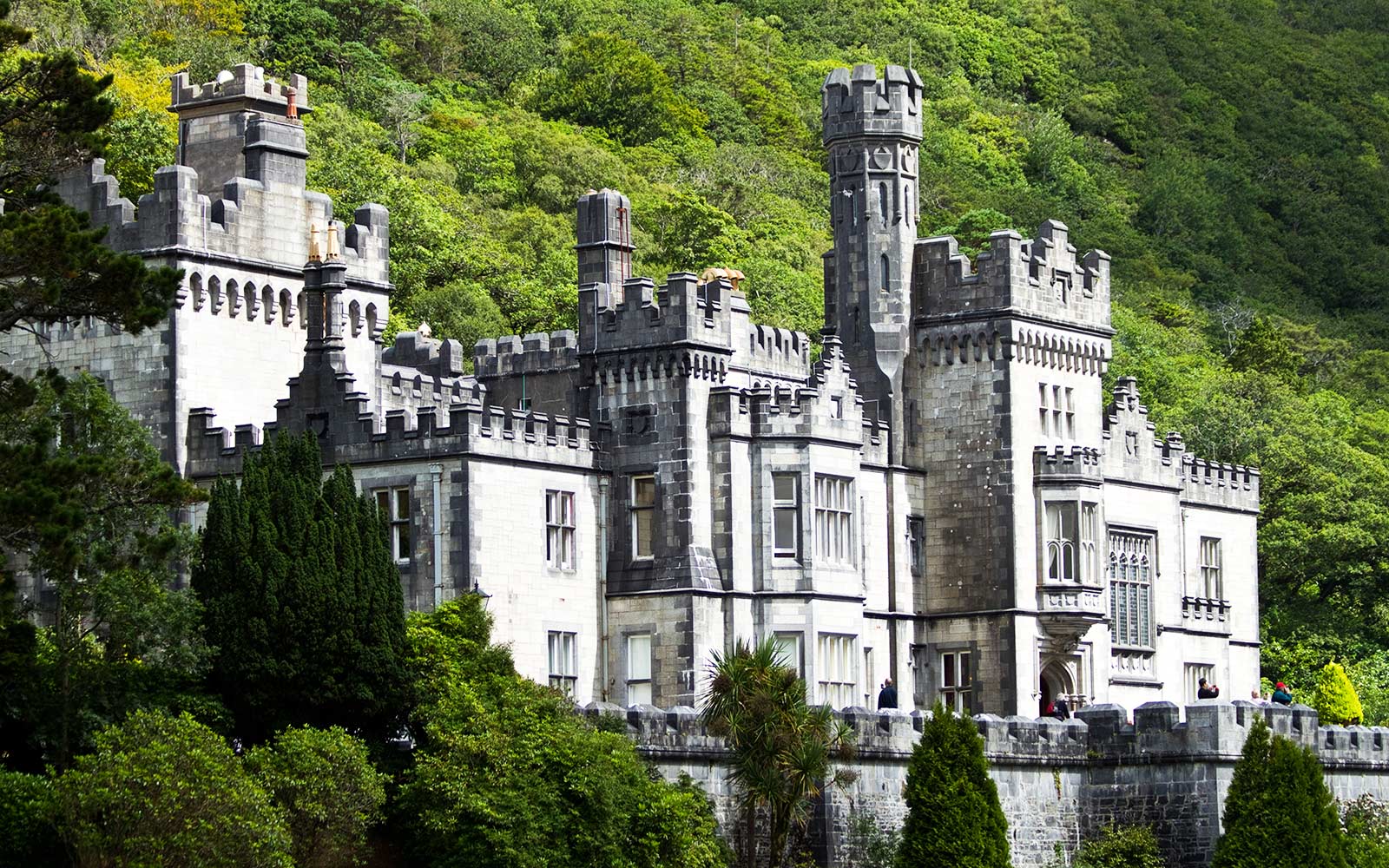 Kylemore Abbey and Victorian Walled Garden is just one hour from Galway, Ireland. The elaborate castle was built in the late 1800s by Mitchell Henry MP. The castle covers approximately 40,000 square feet and has more than 70 rooms. Visitors are invited to history talks that take place three times a day in the Abbey. Tours of the Walled Garden take place throughout the summer. 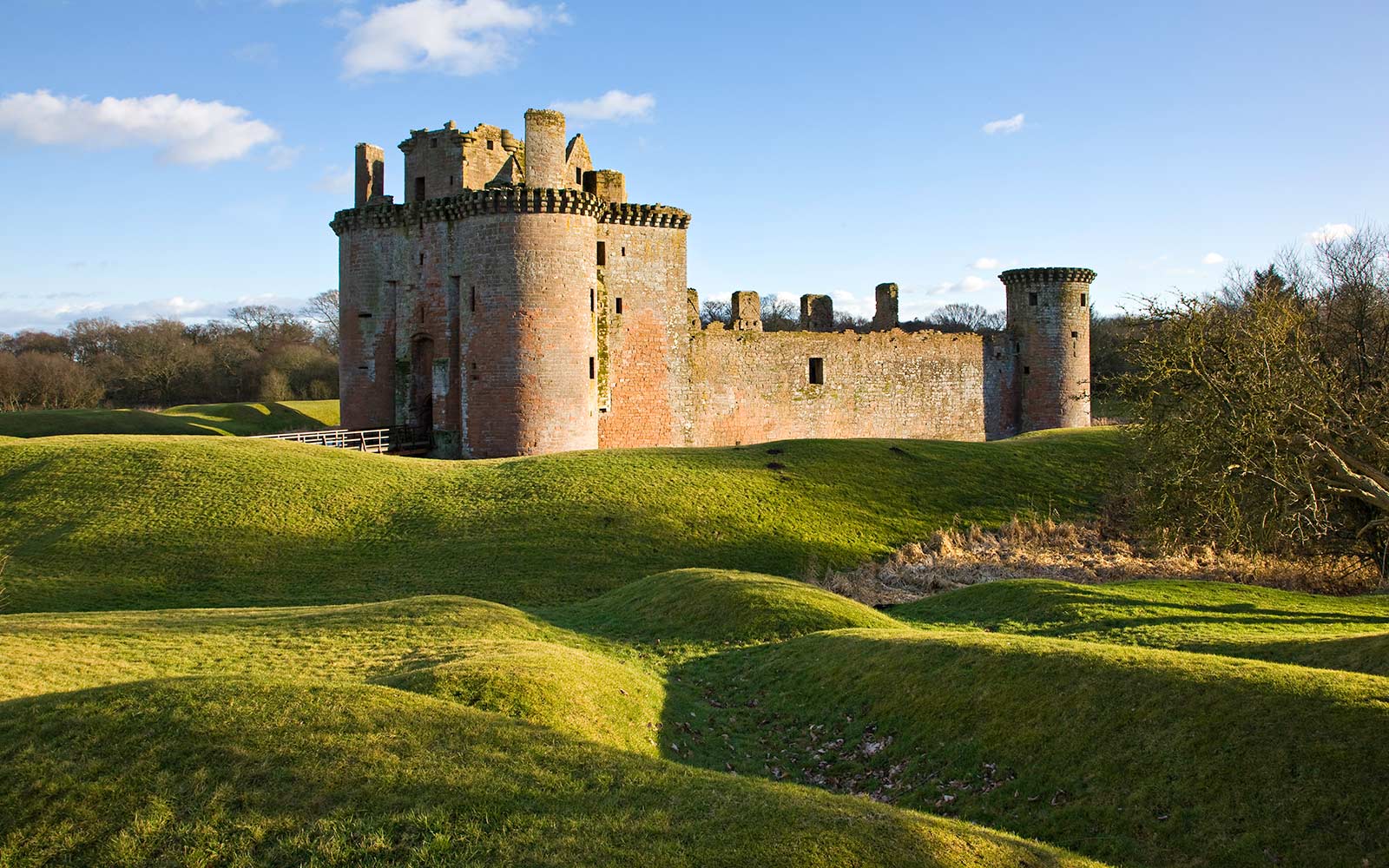 Caerlaverock Castle is exactly where you’d want to be if you needed to escape an enemy. The castle’s thick sandstone walls, moat, and unique triangular shape make it the perfect stronghold. Built in the late 13th century, the home is open to the public and is often used for siege warfare exhibitions. 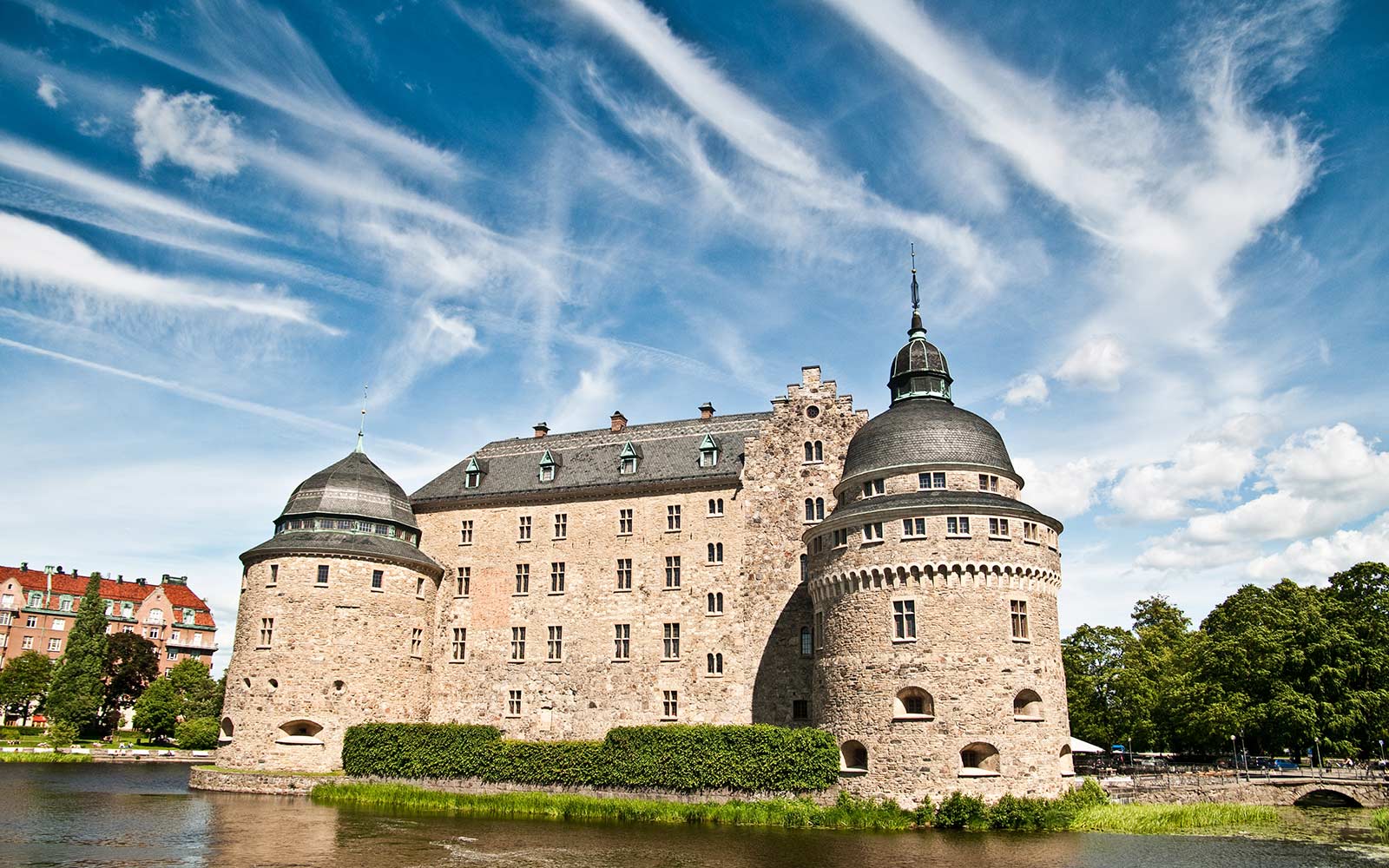 Örebro Castle is situated on an island in the river Svartån. The building has a rich history in Sweden, including the fact that the country’s first Parliament Act was adopted here. In the summer, visitors are welcome to come to the castle for daily tours to learn about the nobility, prisoners, servants, and well-known events that took place within the castle walls. For those looking for a little fright, the castle invites visitors to “Witch Week” ‘at Easter and a ‘Ghost Week’ around Halloween for tours and adventures in the middle of the night. 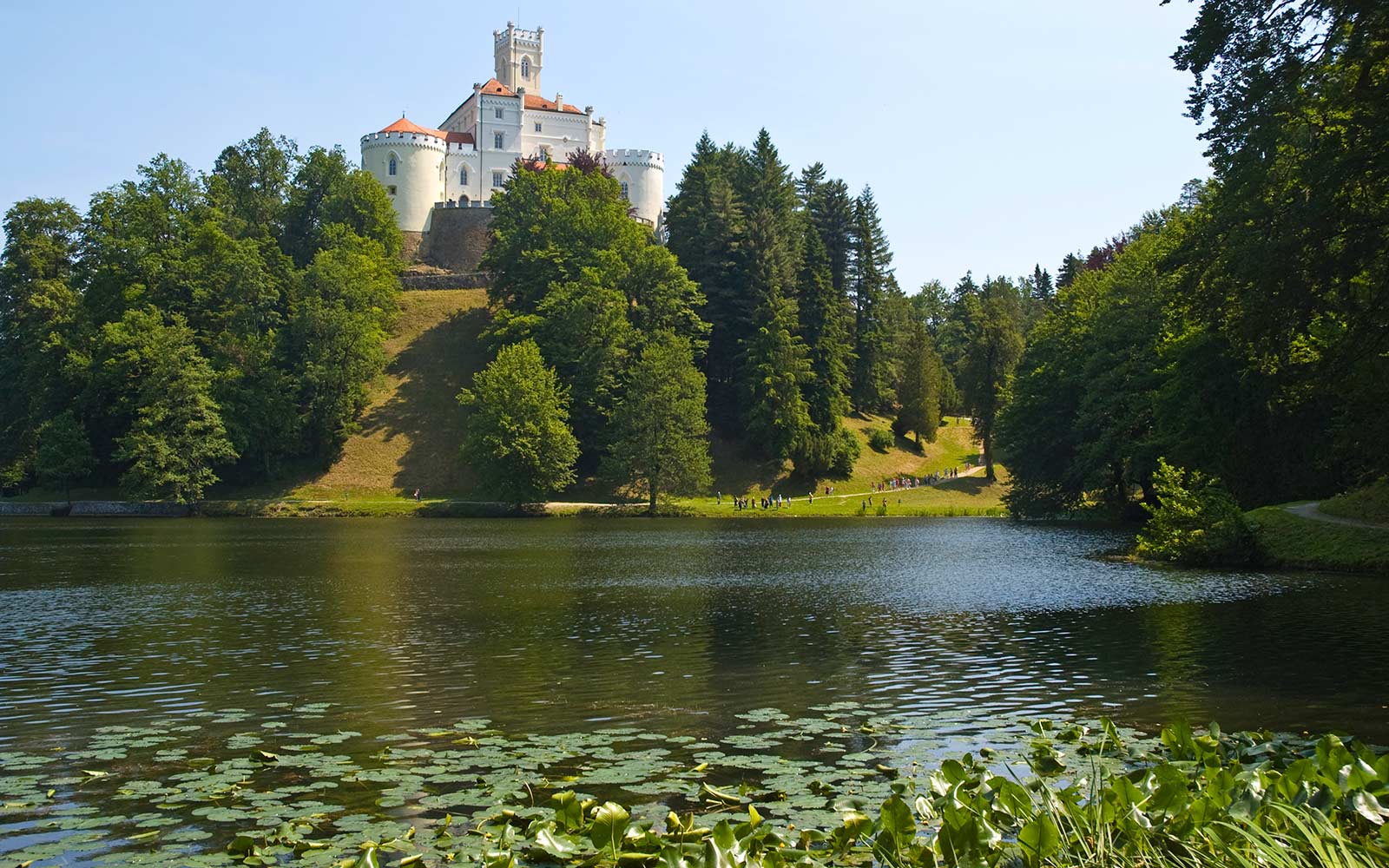 Trakošćan Castle, located in northern Croatia, is somehow considered a “small” observation fortress. The building dates back to the 13th century and was taken over by Croatian Ban Juraj Draskovic for his personal use. It stayed within the Draskovic until World War II. Inside, the castle contains examples of baroque furniture and different weapons used from 15th to 19th century.

In Love with the Wind, Bulgaria 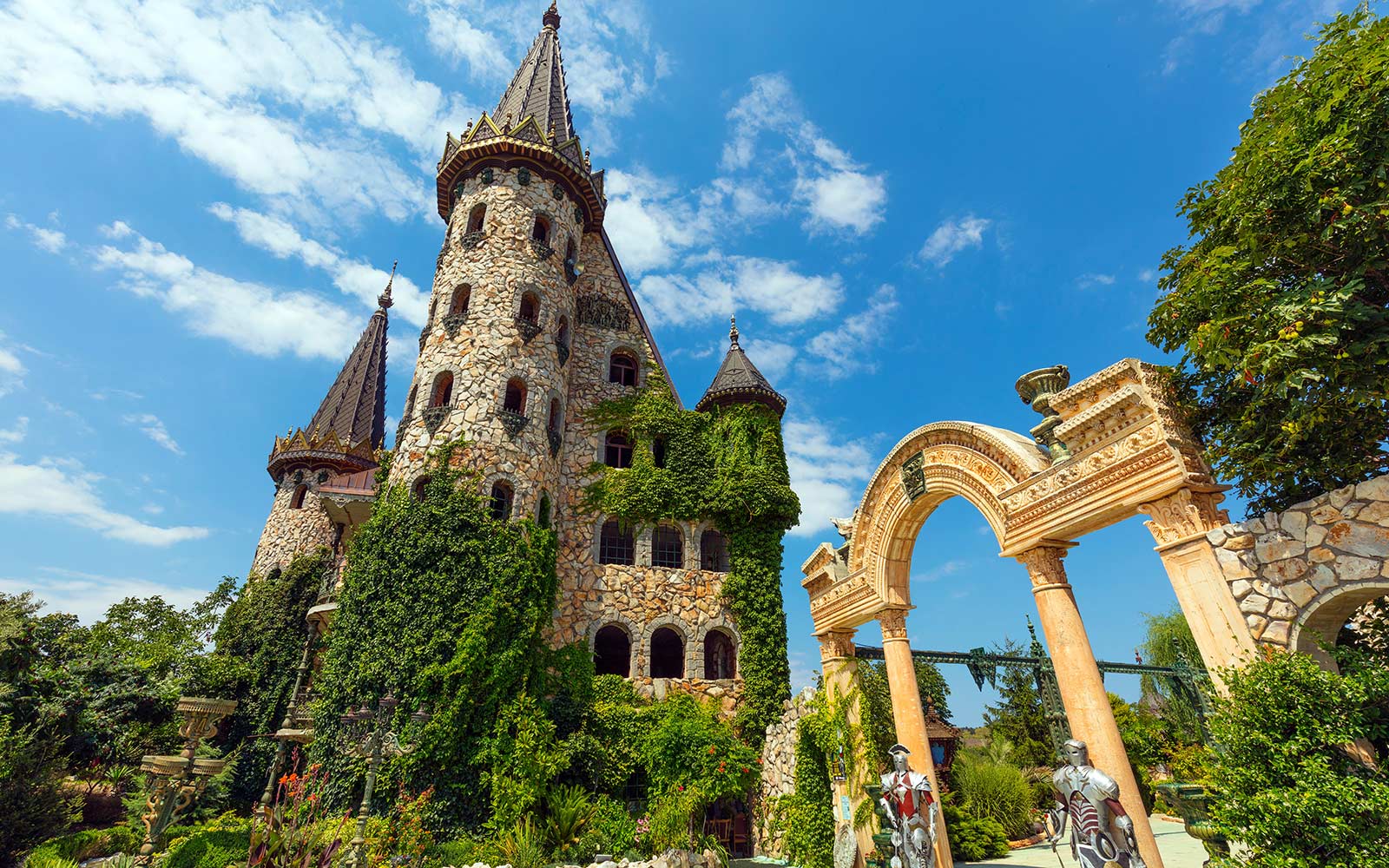 “In Love with the Wind” is a contemporary castle built in 1996 by Georgi Kostadinov Tumpalov to fulfill his childhood dream. The building was constructed using 20,000 tons of stone extracted from the Strandzha Mountains, and comes with equally extravagant gardens, an artificial lake and more. The castle is open to visitors daily. 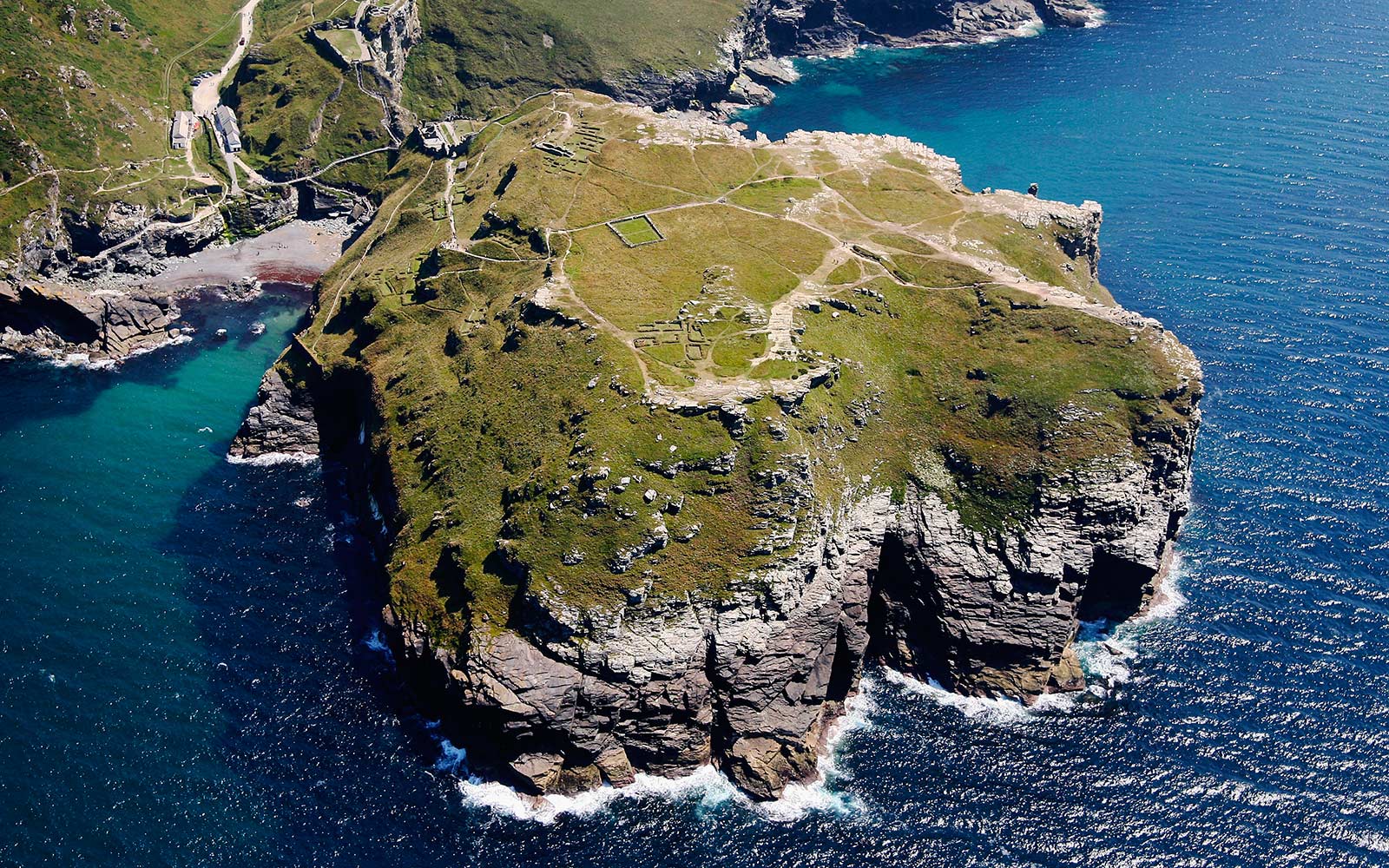 CORNWALL, ENGLAND – JULY 2006: On the North Cornish Coastline in the shadow of the Glebe cliffs lies the mythical castle and headland Tintagel in this aerial photo taken on 15th July,2006. (Photo by David Goddard/Getty Images)

Tintagel Castle is so old its history remains a bit of a mystery. The large castle that once stood is now reduced to ruins, but that doesn’t make it any less appealing. The Castle has reportedly been inhabited since the late Roman period but gained most of its fame in the 12th century when Geoffrey of Monmouth named it as the place where King Arthur was conceived. Dive into history by visiting the site’s exhibits, walk its many paths and explore the rock pools at the beach below. 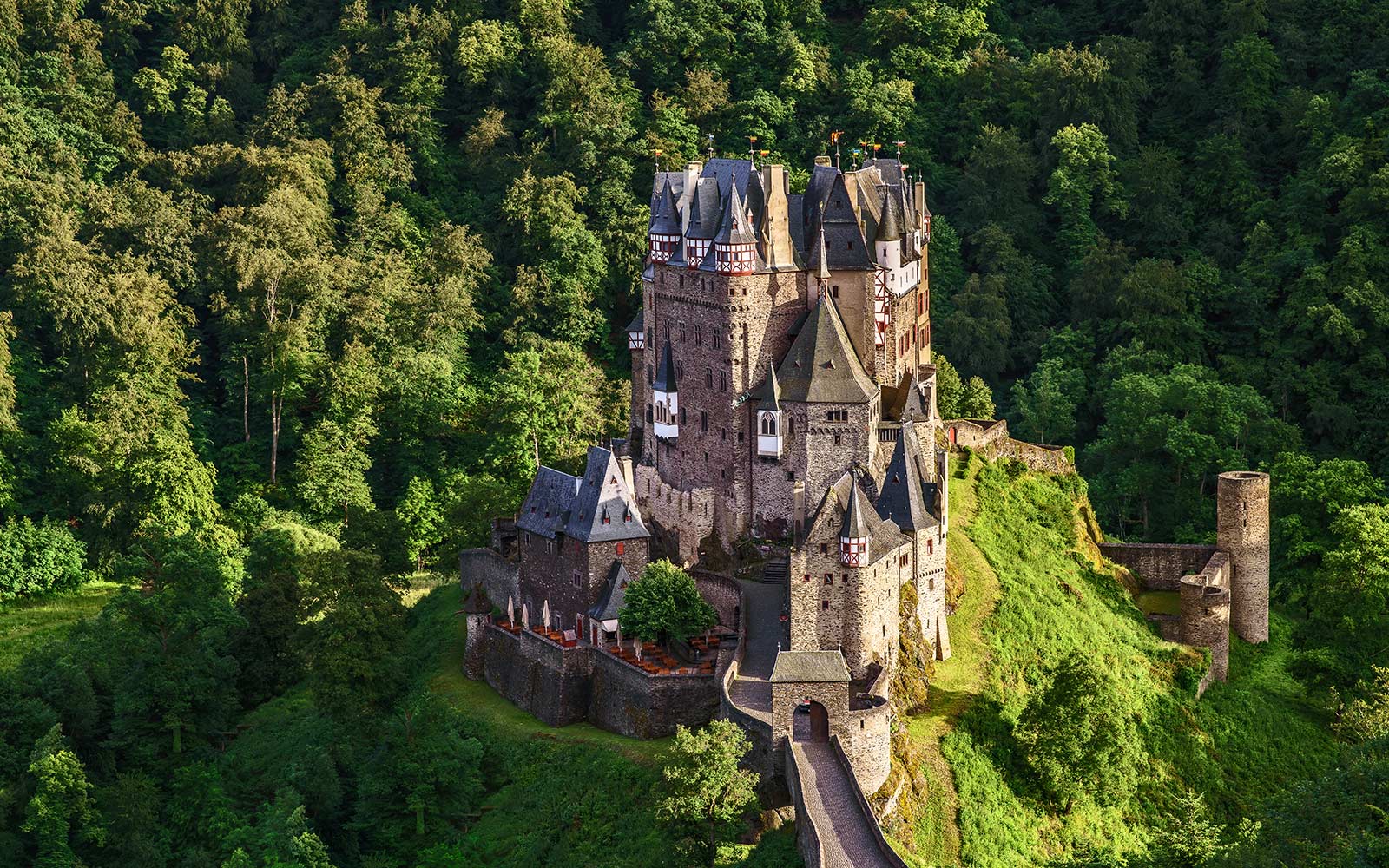 Eltz castle is a striking structure rising from the hills above the Moselle River between Koblenz and Trier, Germany. The medieval castle is still owned by a branch of the same family that lived there in the 12th century. The castle has stood as is for more than 850 years.Count and Coutess Eltz, the current owners of the castle, invite guests to visit daily to roam the interior, see furnishings of the past eight centuries, and hike through the serene nature reserve surrounding the property.